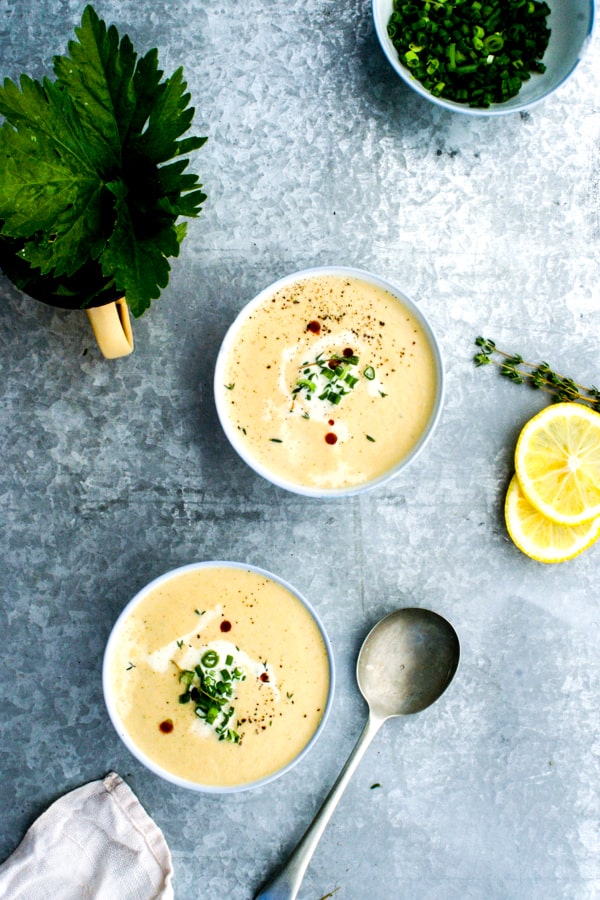 Spaghetti squash is a popular low carb ingredient at the moment, and no wonder, considering its comforting, yet fresh flavor.

Although it can work well in spaghetti look-alike dishes, its uses go far beyond being a healthier spaghetti imitator.

Its light yet satisfying flavor makes it a perfect squash to use in soups and stews. Most soup recipes which call for spaghetti squash use it in its whole ‘stringy’ form to create the impression of fine noodles. However in this recipe the spaghetti squash is pureed to create a smooth texture in the soup, similar to a pumpkin or butternut soup. Combined with a roux and topped off with a lashing of cream, the spaghetti squash makes for a lovely smooth and flavorful base to this creamed soup.

For additional flavoring this recipe also contains celery, a star soup ingredient. The unique saline flavor of celery has made it a time honored component of many soup recipes. To ramp this up a notch, instead of using regular salt to season this soup, we are going to be using celery salt!

Celery salt is a healthy and nutritious seasoned salt, which contains either dried celery or ground celery seeds. It’s a great source of umami, so much so that it can be used as a main seasoning ingredient in vegetarian or vegan broth and stocks.

The flavoring herb of this soup is thyme, which is another ‘timeless’ (excuse the pun) soup flavoring ingredient. Thyme is a very savory herb, with a slightly heavy note in its flavoring. To cut through this, the recipe also incorporates the juice from half a lemon. The lemon juice not only compliments and lightens the flavor of the thyme, it also adds a lovely note of acidity to balance the cream.

Lemon juice or other acids can be tricky to combine with soups which contain cream or milk. The acidity can cause the proteins to separate and thus for curdling to occur. For this reason the base of this soup is a roux. The starch in the roux helps to stabalize the soup and keep the milk and cream in their emulsified states. Another trick that this recipe uses to prevent curdling from happening is a slow heating step once the milk has been added. This has the effect of ‘tempering’ the milk to keep it in its emulsified state.

This last bit about curdling, a roux and milk tempering may sound complex, but in execution it is dead easy.

What is more, this soup recipe does not require stock. How many times have you approached a soup recipe, only to find that it calls for stock, and you don’t have any? And don’t have time to make any, or feel inclined for a trip to the store? Well, thanks to the celery salt, as well as the flavor balance between the thyme, lemon and cream, you do not need any stock. If you have some and want to substitute it in, by all means do so. But consider this officially one of those convenient yet tasty soup recipes which do not require you to have stock on hand.

Oh, and I almost forgot. There is one more secret to this stockless soup recipe. 5 grams of parmesan cheese. Adding cheese rinds to soups and stews is a great trick for increasing depth of flavor and adding in a little extra umami. The pinch of parmesan acts much in the same way as adding a cheese rind – only you do not need to wait to have a rind on hand.

Besides boasting a delectable burst of flavors, this soup is also full of fiber, vitamins and minerals. Celery, celery salt and spaghetti squash are all nutritionally dense and vibrant ingredients, which makes this soup even more enjoyable to eat and to serve.

Let’s jump in to the recipe. 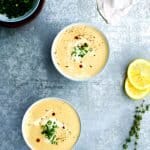 Notes: If you are sensitive to heat and spices, omit the tabasco sauce as the heat can spread rapidly through a bowl of soup. If you love a touch of heat, and do not have tobasco sauce on hand, feel free to use another type of hot sauce. Other topping ideas you could try are croutons, and grated cheese. If you do not have celery salt on hand you can substitute this for ordinary salt. However take note that this will reduce the depth of flavor of the soup. If you do this, then it may be a good idea to swap out the water for vegetable stock.

This soup can be served either hot or cold, and will keep for up to 5 days in the refrigerator. Leftovers can also be frozen. With soups containing cream there is a chance of separation occurring at the point of defrosting. However this is easily remedied by re-blending.

STEP ONE – ASSEMBLE ALL INGREDIENTS 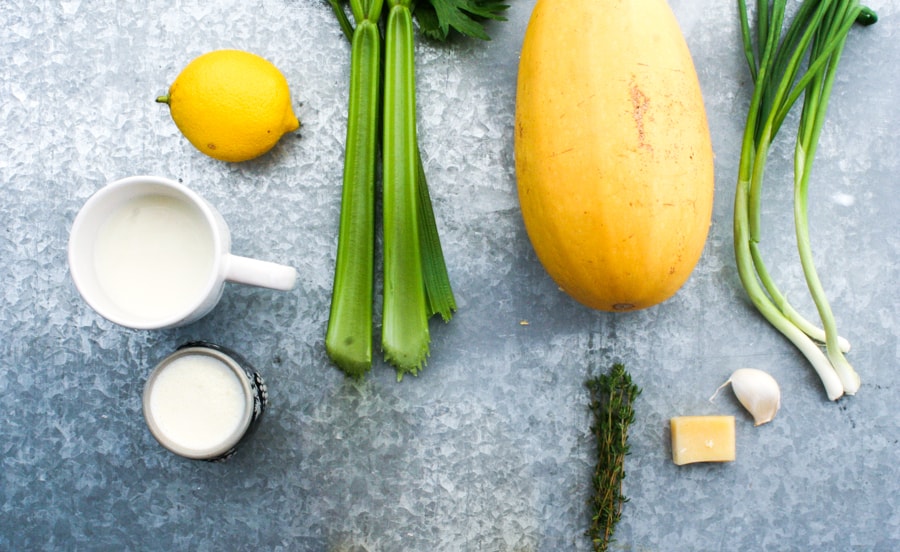 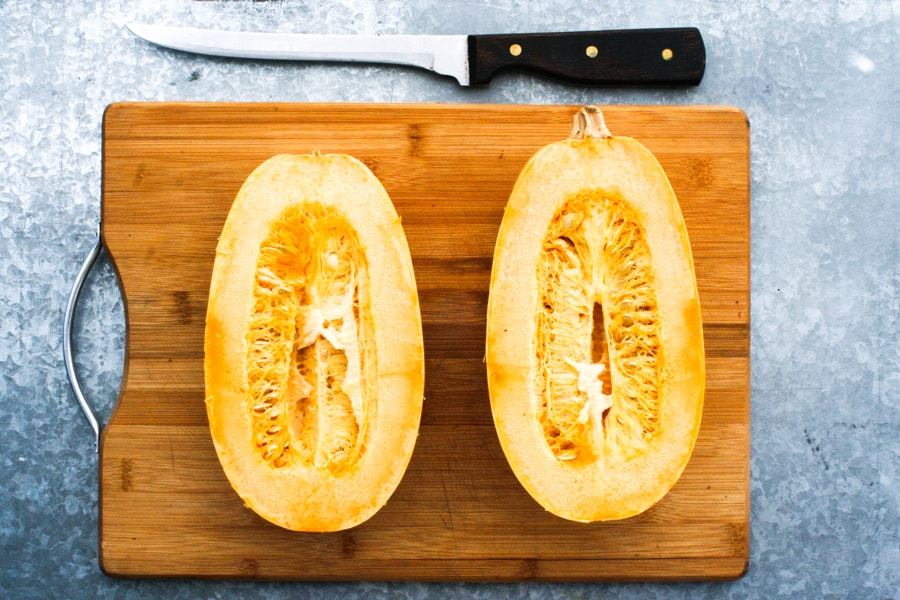 With a large kitchen knife, slice the spaghetti squash in half and scoop out the seeds and discard them. 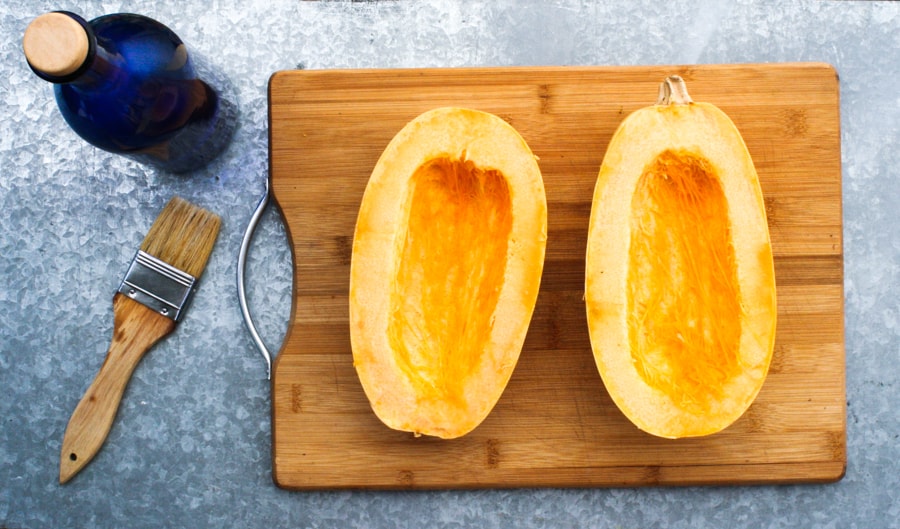 Brush the insides of the spaghetti squash halves generously with olive oil. 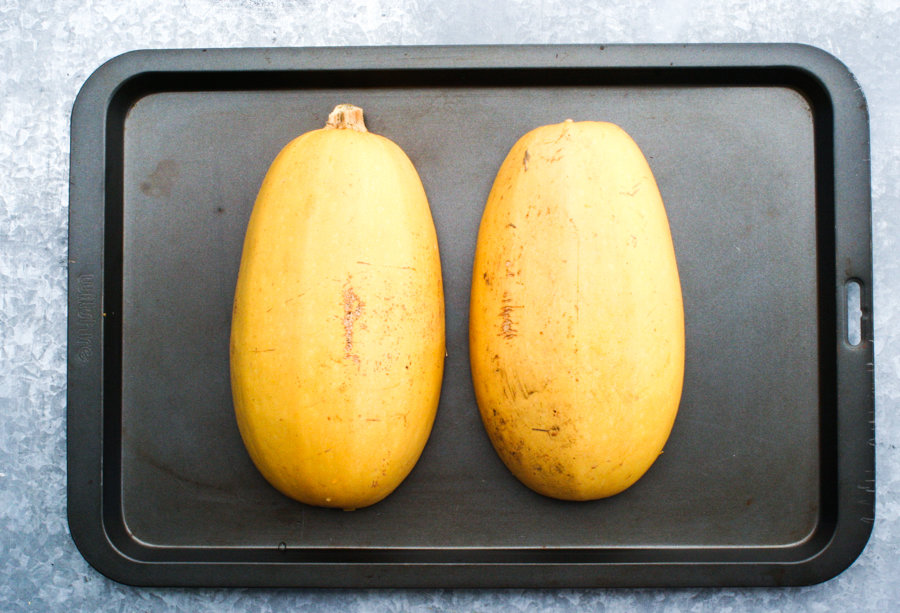 Place the spaghetti squash halves face down on a sheet pan. Place in the oven and roast at 400 degrees Fahrenheit until tender. This takes about 25 minutes.

STEP FIVE – PREPARE YOUR OTHER VEG 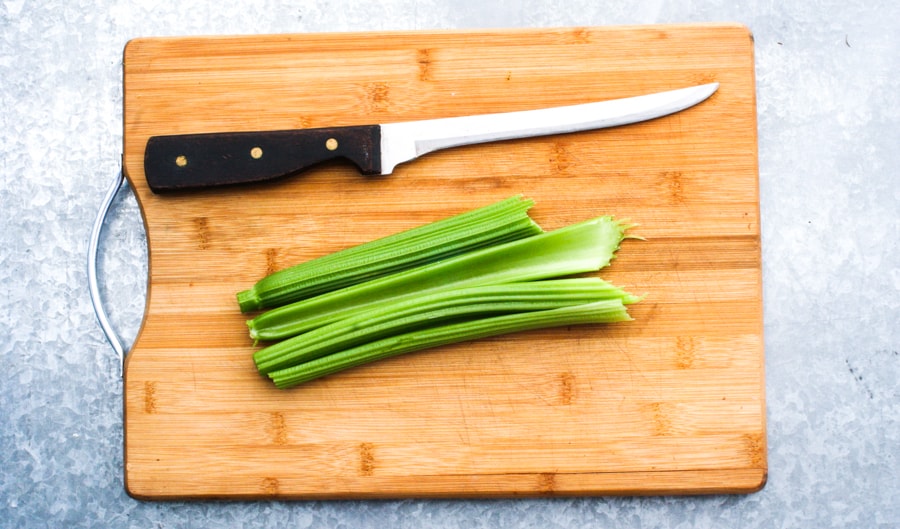 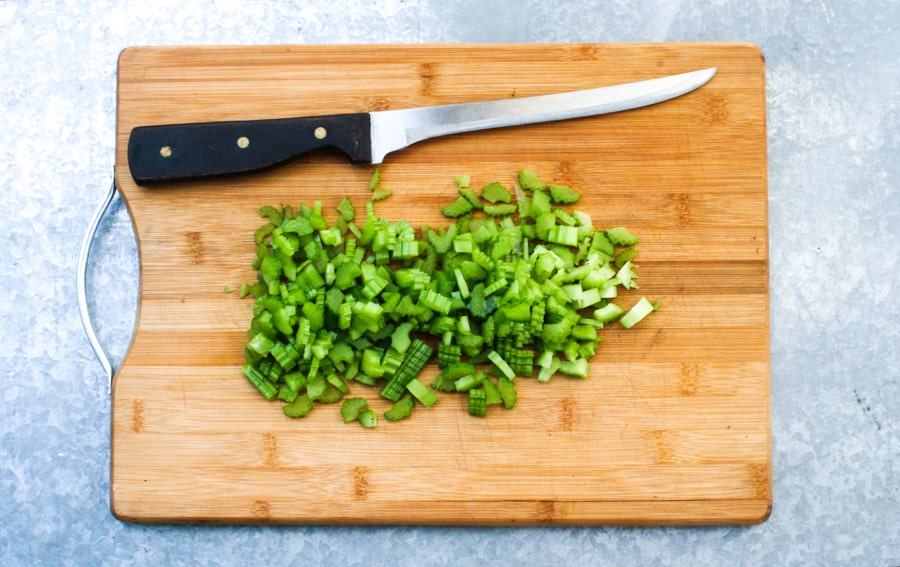 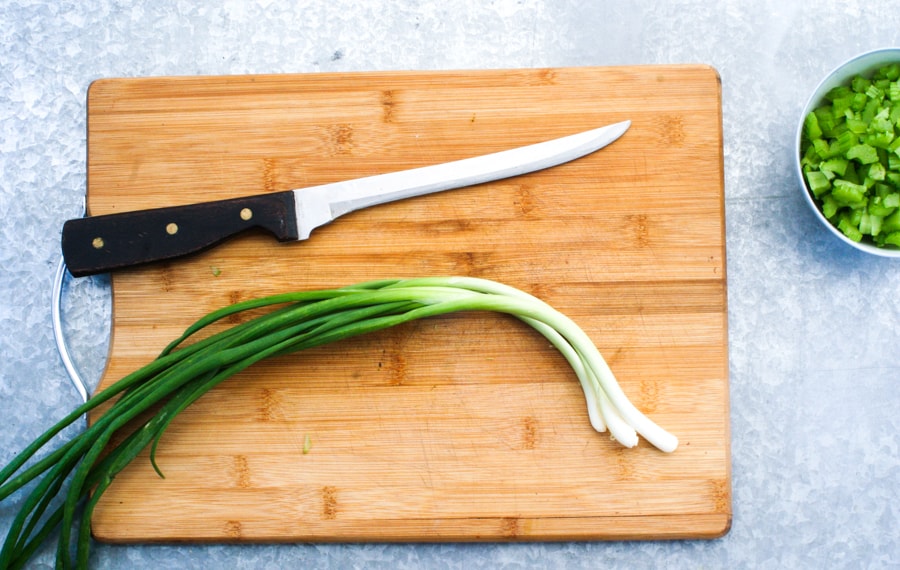 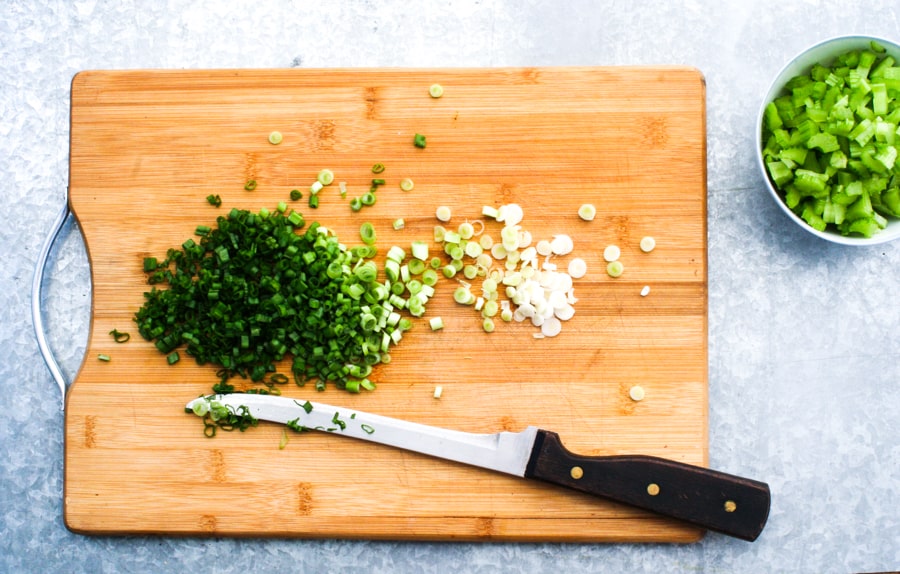 While the squash is roasting, finely chop the celery and scallions, and peel the clove of garlic. When chopping the scallions, keep aside some of the chopped green tops, as these will be used for garnish.

STEP SIX – REMOVE THE SPAGHETTI SQUASH FROM THE OVEN 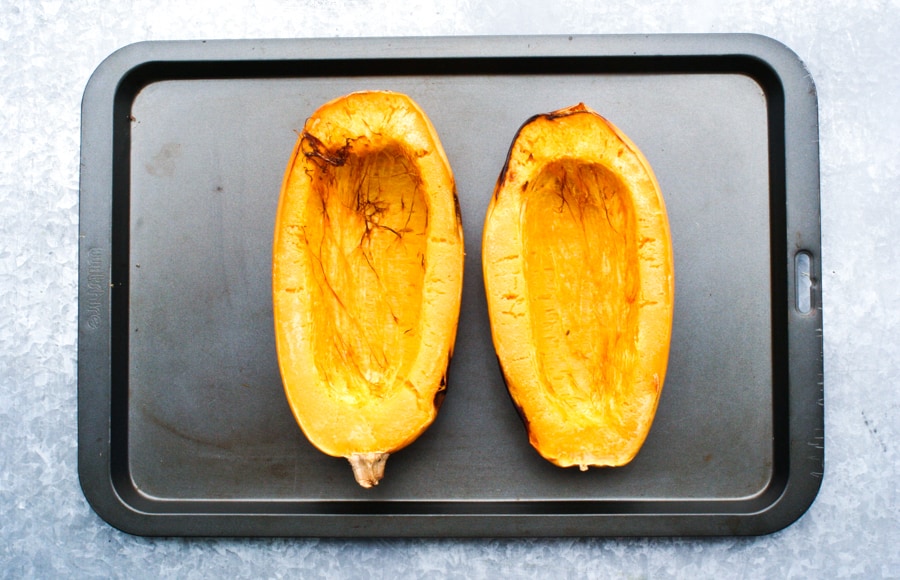 After proximately 25 minutes the spaghetti squash should be roasted. Remove the halves from the oven and set them aside to cool. 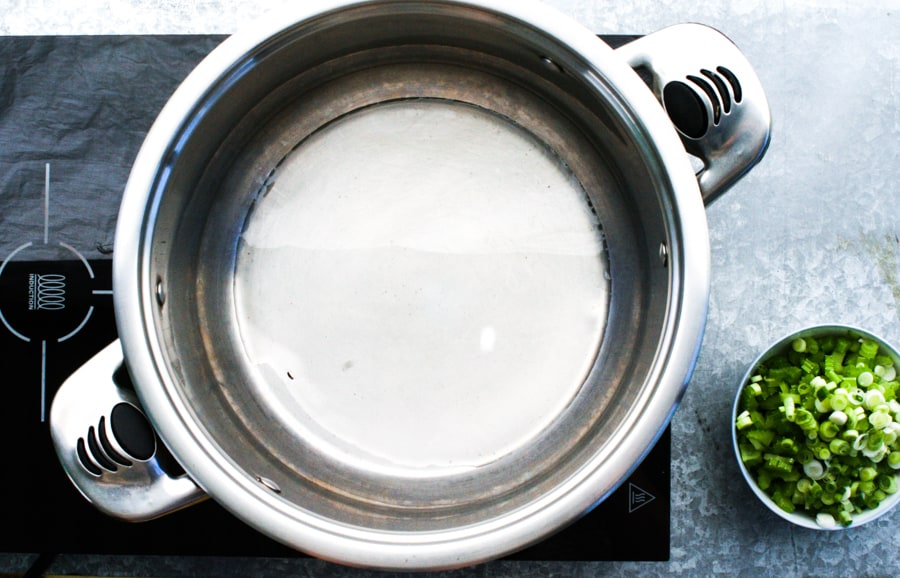 Now place a large pot onto the stove and add enough olive oil to coat the bottom. 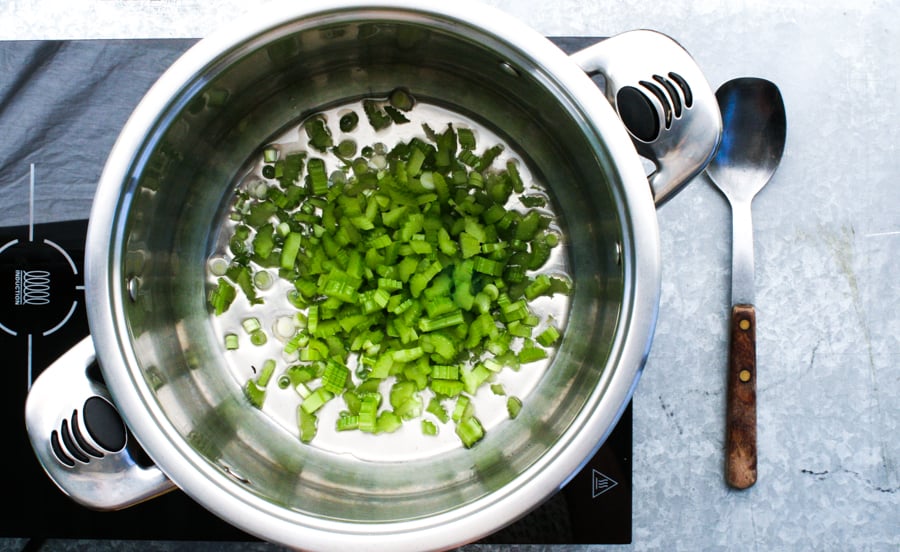 Bring the pot up to a medium high heat and add the chopped celery and scallions. 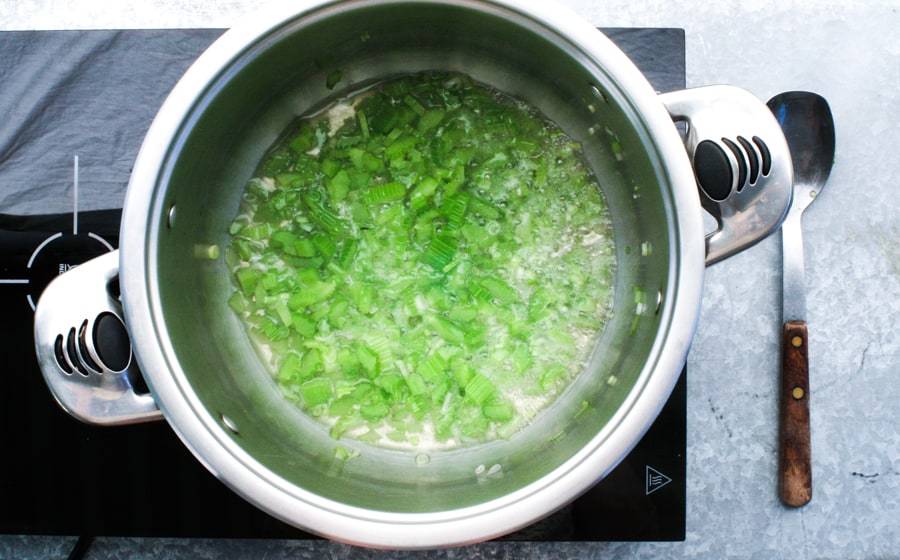 Pan fry on a medium to high heat until the celery shows signs of becoming tender. Be careful not to overcook the celery at this point, as you want to keep the fresh flavor. 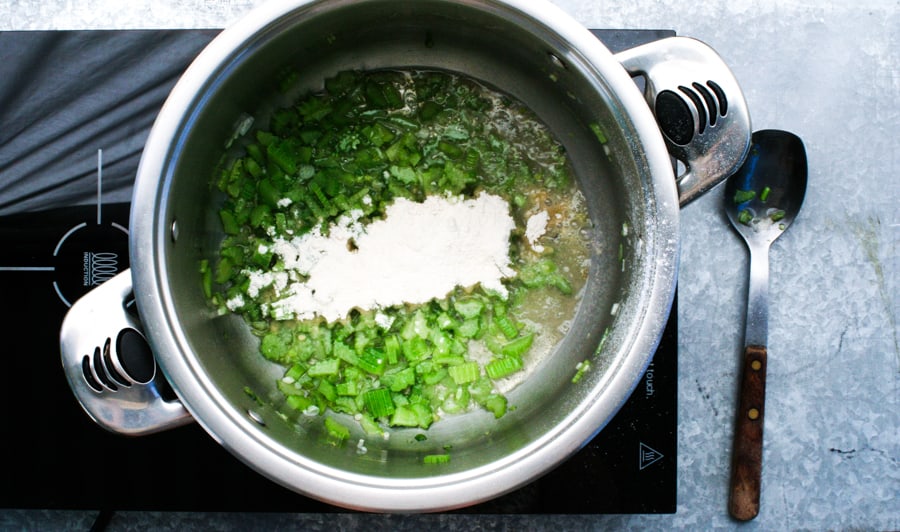 Add in the 4 tablespoons flour and stir together for a ¼ minute. 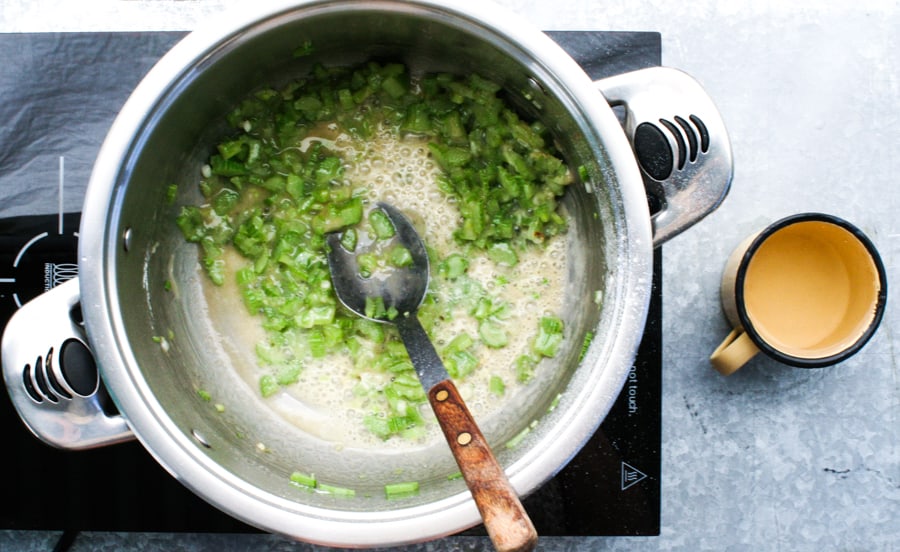 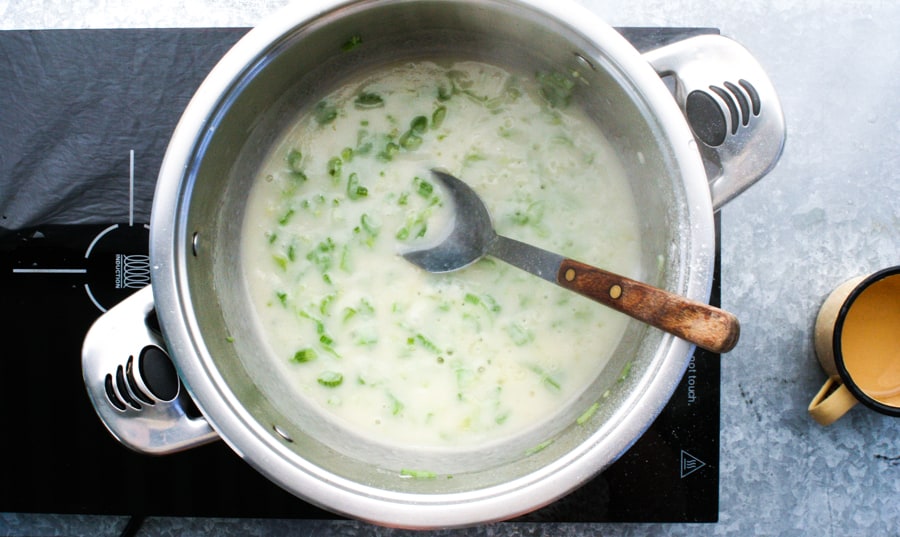 Add in the water to form a roux and stir continuously until the roux is thick and smooth. At this point turn the heat down to low and let the pot simmer for approximately ½ a minute, stirring intermittently.

STEP TWELVE – SCOOP THE FLESH OUT OF THE SPAGHETTI SQUASH HALVES 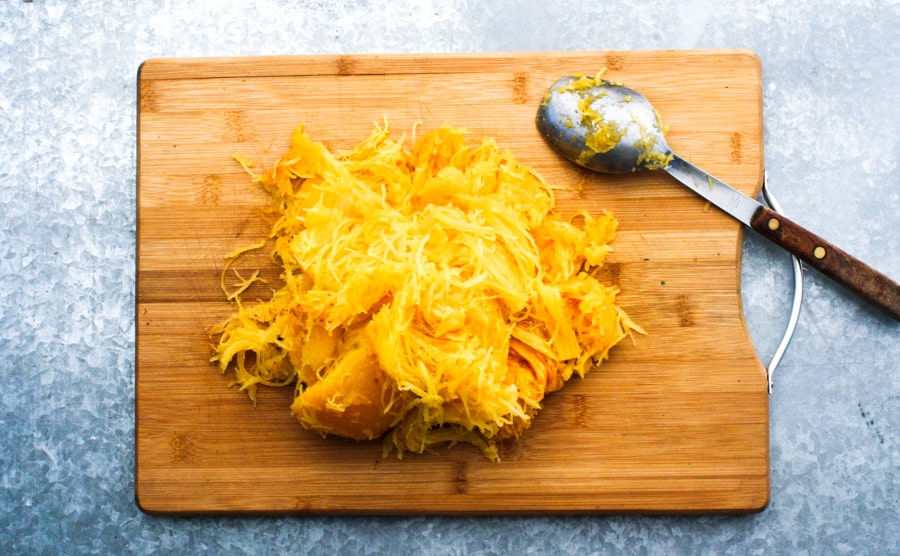 Now take the cooled spaghetti squash halves, and scoop the flesh out of the skins and onto your chopping board.

STEP THIRTEEN – REMOVE THE POT FROM THE STOVE AND BLEND TOGETHER WITH SPAGHETTI SQUASH, GARLIC, AND MILK 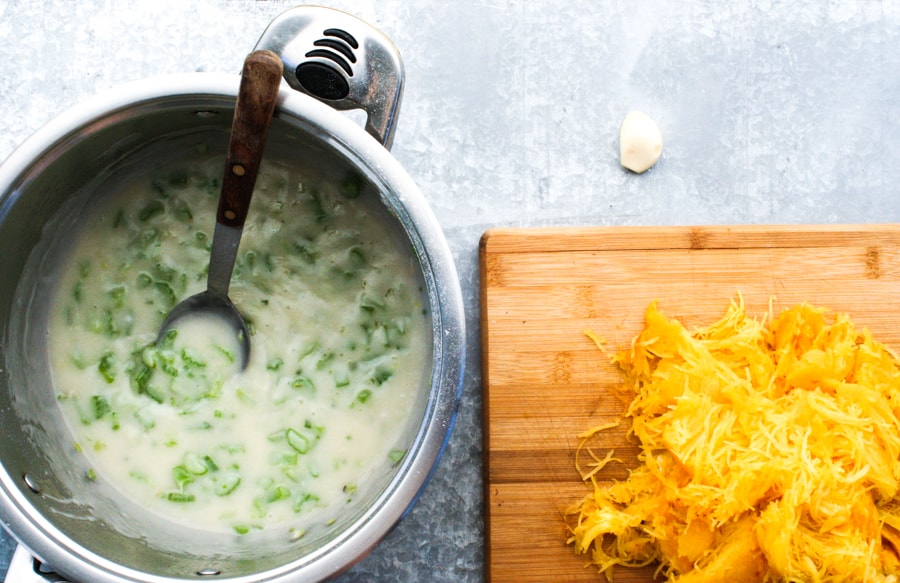 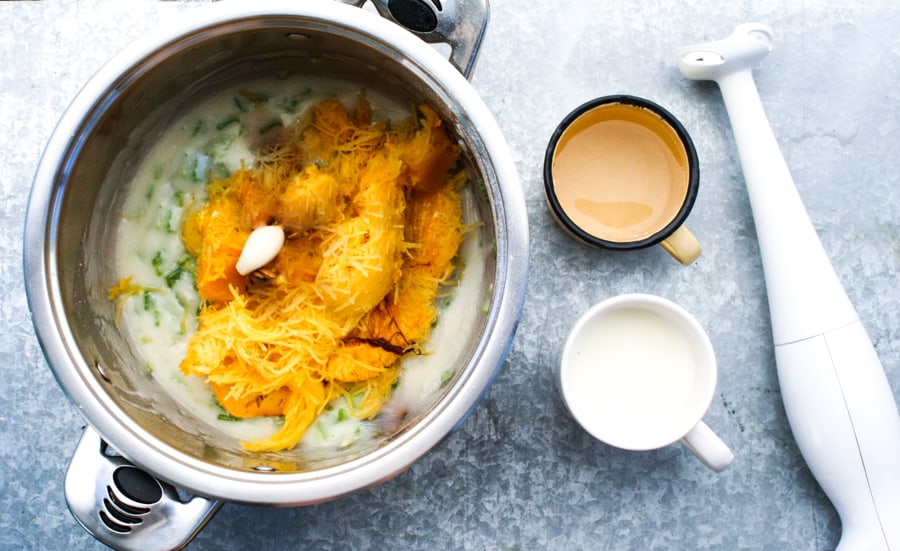 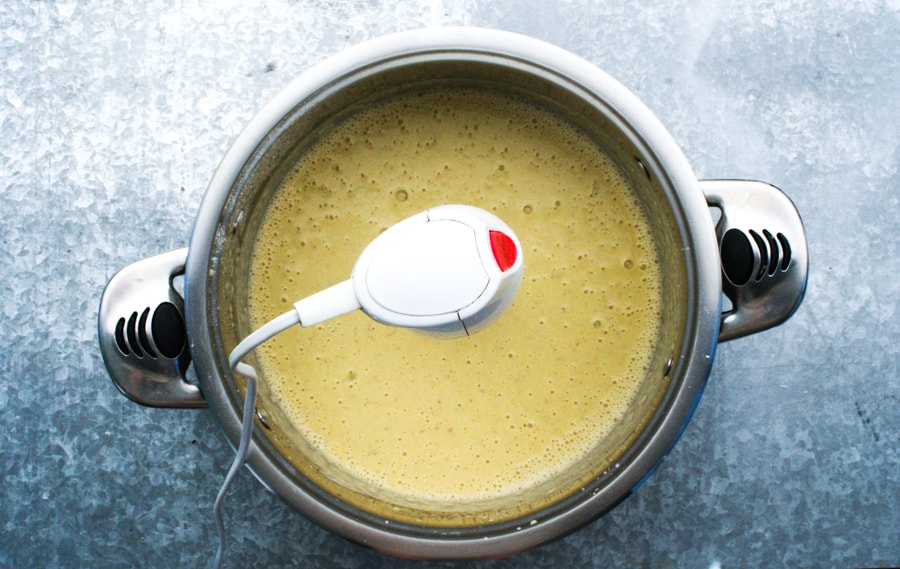 Remove the pot from the stove, add the spaghetti squash, the whole clove of garlic, and the milk and blend well. I like to use an immersion blender for this job, as it means you can simply add in the additional ingredients, and blitz it to a puree without having to set up a blender. If you are using a jug blender, simply spoon the pot’s contents and the additional ingredients into the jug, and once smooth pour the liquid back into the pot. 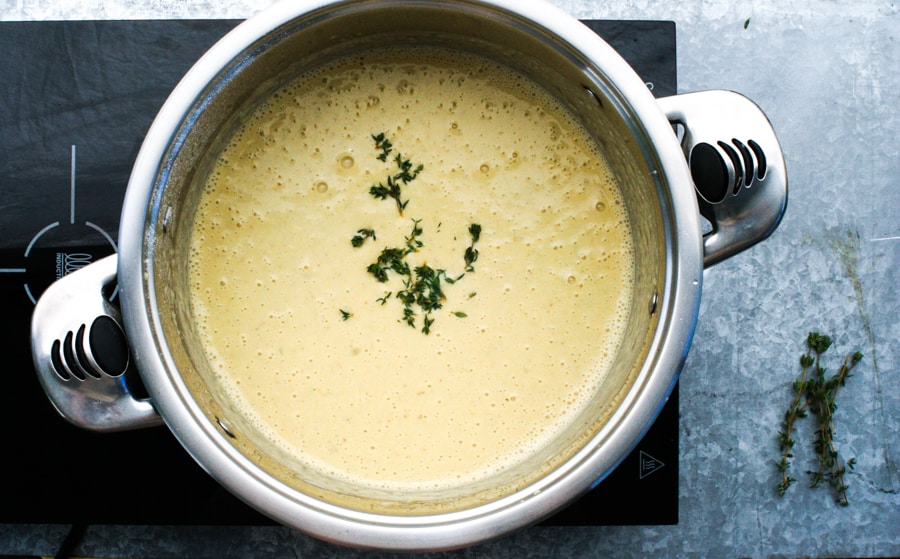 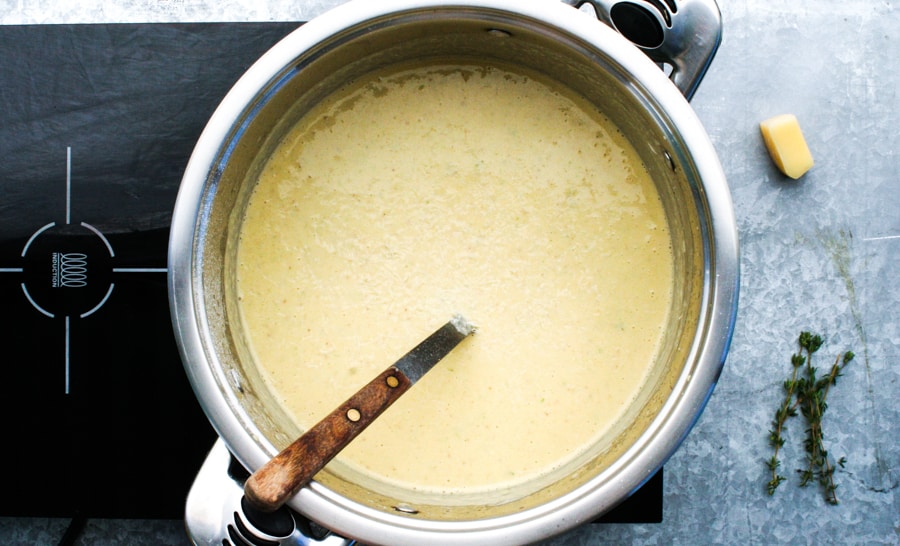 Once blended smooth, return the pot and its contents back to the stove, starting it off on a low heat. Add the thyme, parmesan and celery salt and slowly allow it to reach a near simmer point. Make sure that the pot does not heat up too rapidly. This is what is known as tempering the milk, so that the lemon juice will not cause curdling when you add it.

When you add the celery salt, add it in increments and taste the soup as you do this. Different brands of celery salt contain varying ratios of salt to celery extract, so it is important to taste as you add it in to ensure that you get the salt quantity just right.

STEP FIFTEEN – ADD THE CREAM AND THE LEMON JUICE 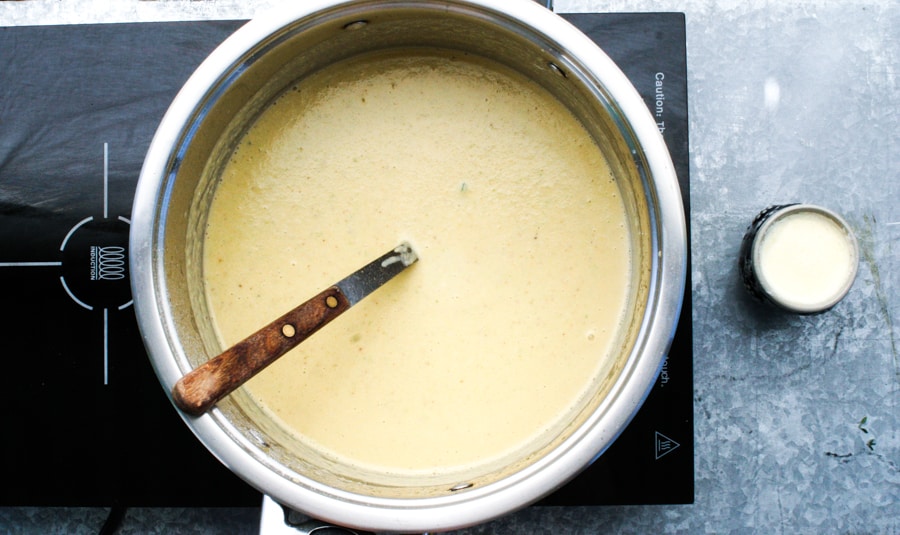 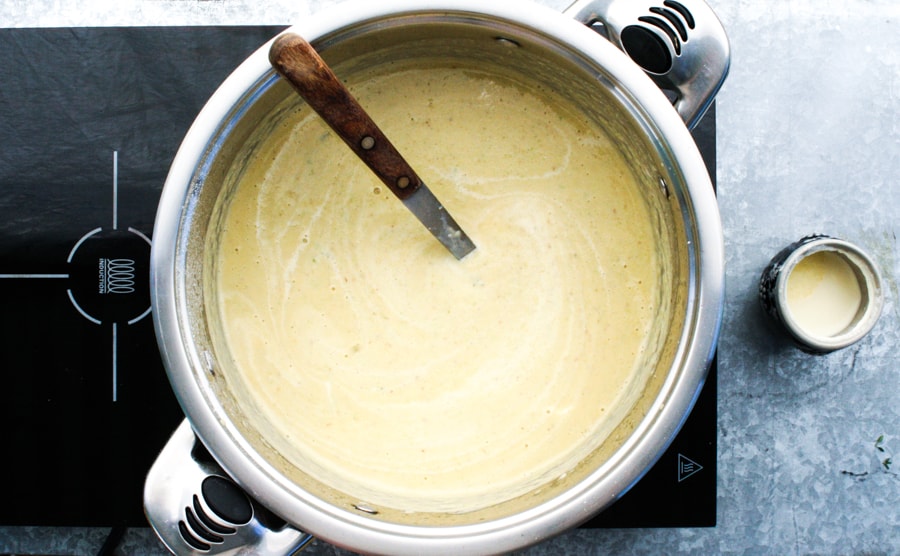 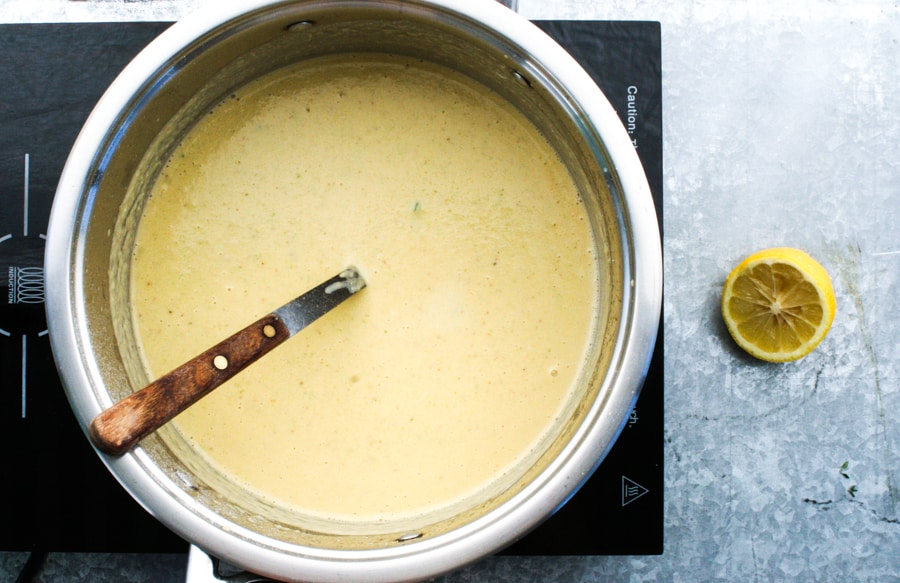 Finally add the cream (reserving a small quantity for garnishing when serving) and stir it in. Then add the lemon juice little by little, stirring in between.

Serve topped with the reserved chopped scallions, an extra dash of cream, a sprinkle of freshly ground black pepper, and 2-3 drops of tabasco sauce.

This recipe is listed as an appetizer, as soups are traditionally served as that. However nowadays we eat soups as main meals as well. As an appetizer this soup brings bright yet cream laced notes. It is not too filling, which is usually a good thing in an appetizer. However the spaghetti squash is satisfying enough for the soup to be eaten as a main. Pair it with some crusty bread and you will have yourself a simple but tasty meal.

Soups are generally a classic wintertime dish. Spaghetti squashes are available pretty much from the beginning of autumn right through winter, as they keep well, which makes them a wonderful wintertime soup ingredient. However if you happen to make this soup in warmer times, the bright and gentle flavor of the spaghetti squash will ensure that the dish does not seem out of place or unseasonal. 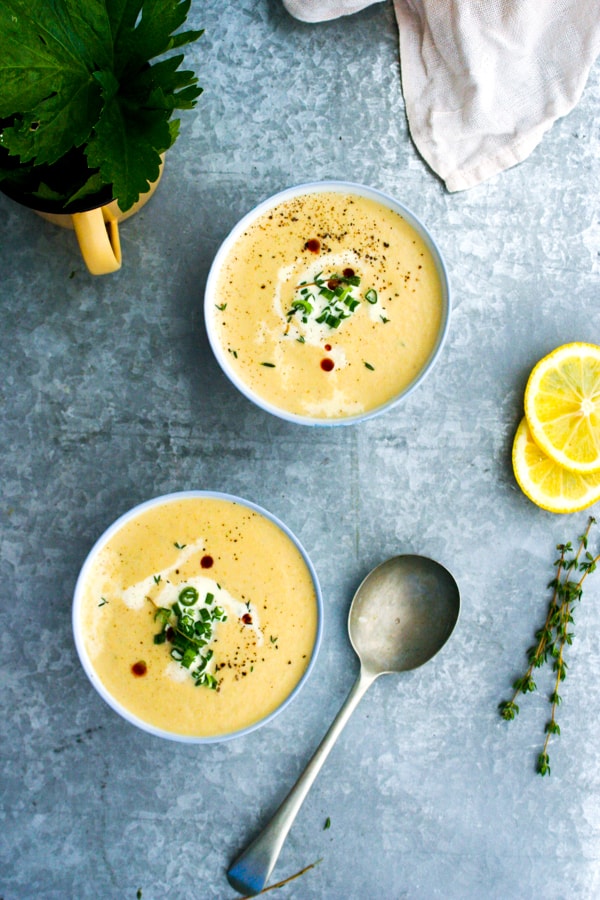 Do you have a favorite use for spaghetti squash, or a favorite soup recipe or ingredient? If so, let us know in the comments. We love hearing from you.