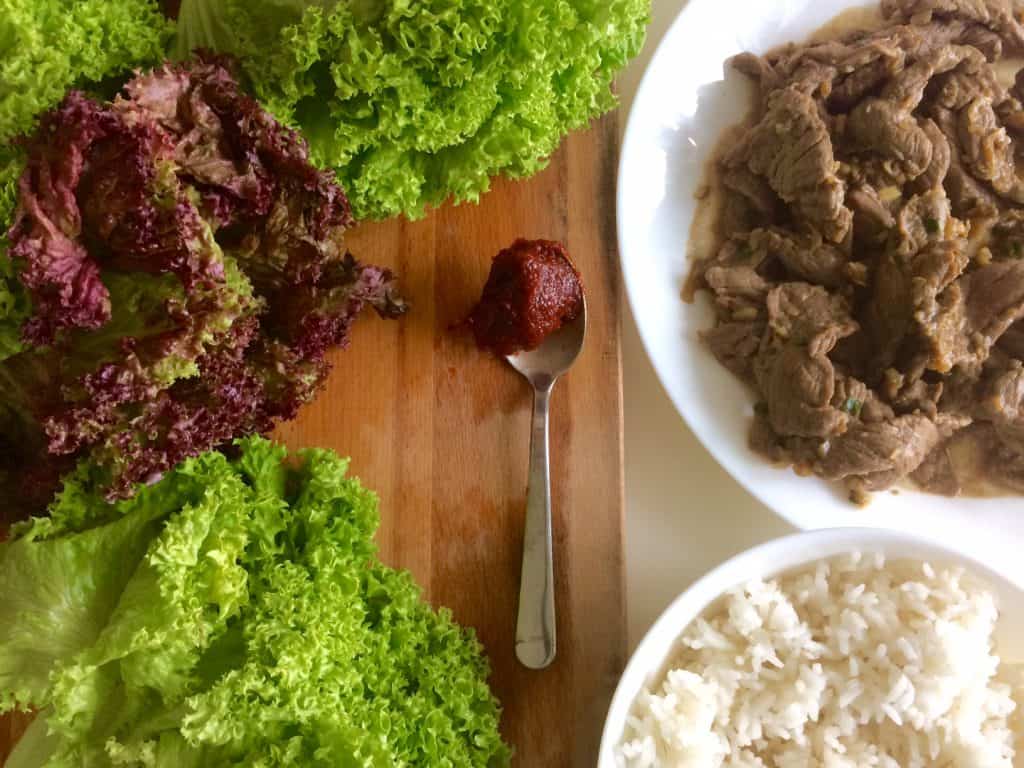 Thin yet succulent slices of tender beef, marinated in a fragrant dressing both sweet and salty, paired with hot fluffy rice and wrapped up into a parcel of fresh, crisp lettuce leaves. If that doesn’t sound appealing, I don’t know what does.

Bulgogi, which quite literally translates to “fire meat” in Korean is a popular dish both in Korean barbecue joints and home cooking alike. If you have access to a grill, by all means barbecue the beef over charcoal for a more intense flavor as this is how it’s traditionally done as well. If you’d prefer it juicier, simply stir-frying it in a pan over the stovetop works perfectly well too. Not to mention more accessible to most home cooks as well as much easier to clean up.

The essence of bulgogi lies in its marinade. Made from soy sauce, sugar, sesame oil, garlic, pepper and other aromatics such as spring onions, ginger and chili flakes. Meat tenderizers in the form of mashed kiwi and even soft drinks such as 7-up commonly make an appearance as well. For this bulgogi recipe, we’ll be using asian pear instead. The asian pear isn’t your standard crunchy green pear but almost entirely different. Also known as Nashi pear or Korean pear, its flesh is crispy, juicy and sweet and is identified by skin ranging from off-white to yellow to light brown. In traditional asian cooking, its known for having a cooling and phlegm-removing effect. In this marinade, its purpose is not only to further tenderize the meat but also to add a light and natural sweetness.

If you’ve always thought of bulgogi as an indulgent dish reserved for night outs in korean establishments, try this recipe out for yourself! All you need are the basic seasonings and aromatics found in every asian kitchen which are cheap and simple enough to find. From there on, your money need only be spent on a good piece of tender beef such as ribeye, sirloin or topside. 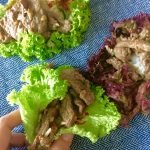 STEP ONE – PREP THE INGREDIENTS 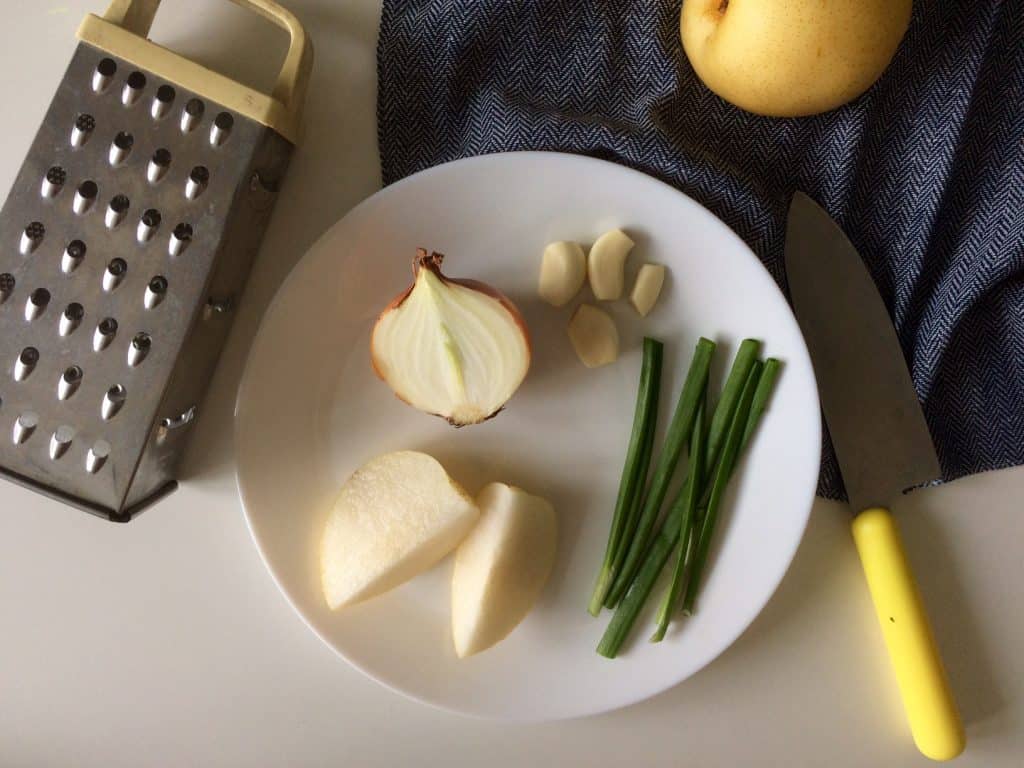 Firstly, start by preparing the ingredients. For the meat, slice it against the grain into thin slices. It can be a bit difficult if the meat is too soft or the blade isn’t sharp enough. To make things easier, place the entire chunk of meat in the freezer for 15 minutes or so (depending on the size of the steak) until it’s hardened slightly. This will make it easier to slice thinly. Peel the garlic cloves. Remove the skin of the white onion and slice it into half. Peel the asian pear and cut it into wedges (you only need half a small one or slightly less) and wash and segment the spring onion.

STEP TWO – MINCE THE INGREDIENTS FOR THE MARINADE

Mince the garlic and finely chop the spring onion. For the pear and onion, they need to be grated as we want finer pieces. Grating helps to extract more juices out from the onion and pear as well which will add even more flavor to the beef slices and is more easily absorbed! Alternatively, you can use a food processor to blend all the ingredients together to form a more homogenous marinade. Check out our review of the best food processor here! 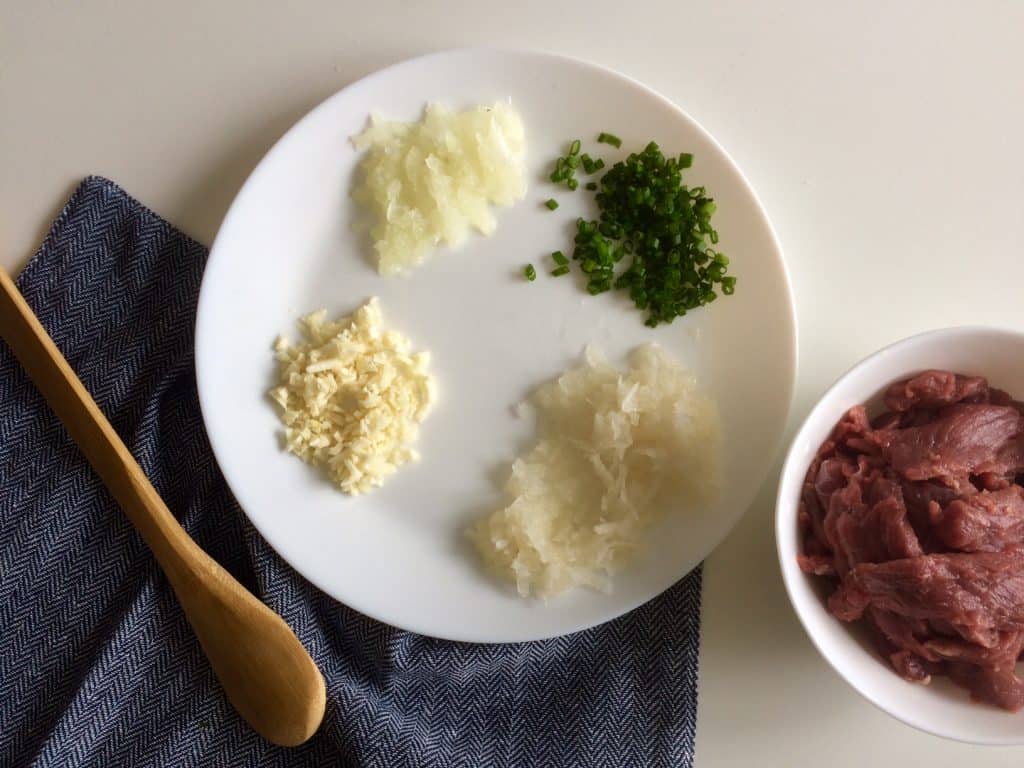 Add the garlic, pear, onion and spring onion to a bowl along with the beef slices. 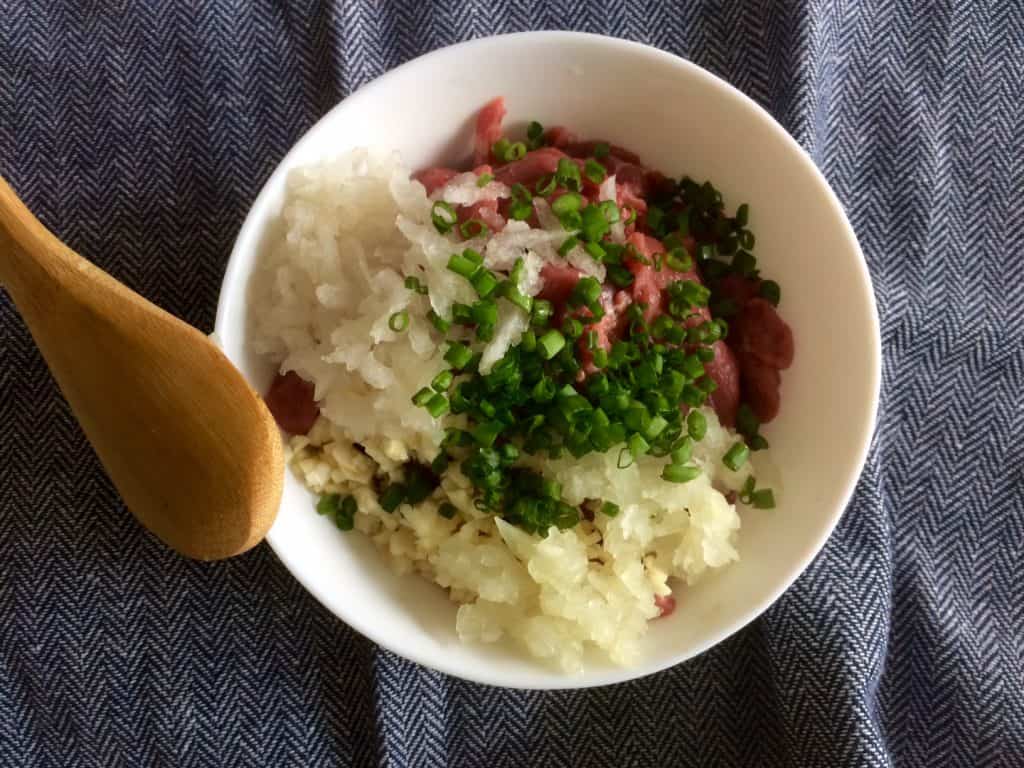 Add in ¾ tbsp of brown sugar. Don’t worry as the sugar won’t stand out at all after the cooking process. In fact, it’ll caramelize and add a beautiful depth and layer of sweetness to the dish. 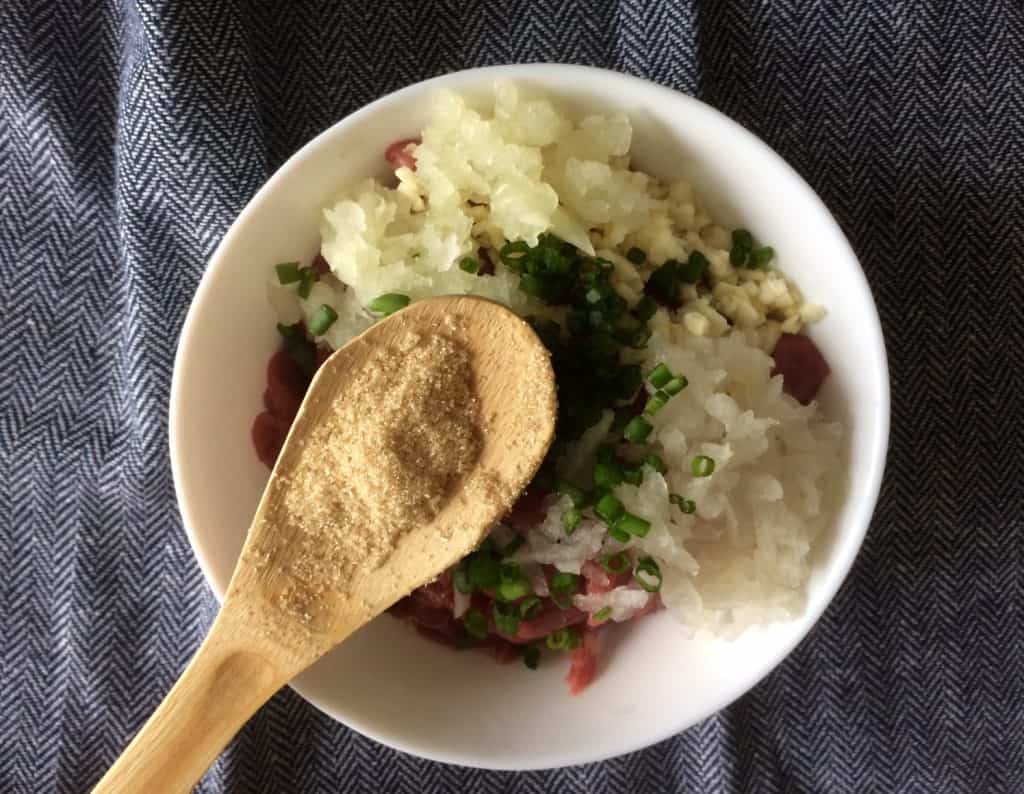 Now, add in a tablespoonful of sesame oil. Like all good Korean recipes, sesame oil is crucial. But take caution and try not to add too much as it’ll easily overpower the other flavors. 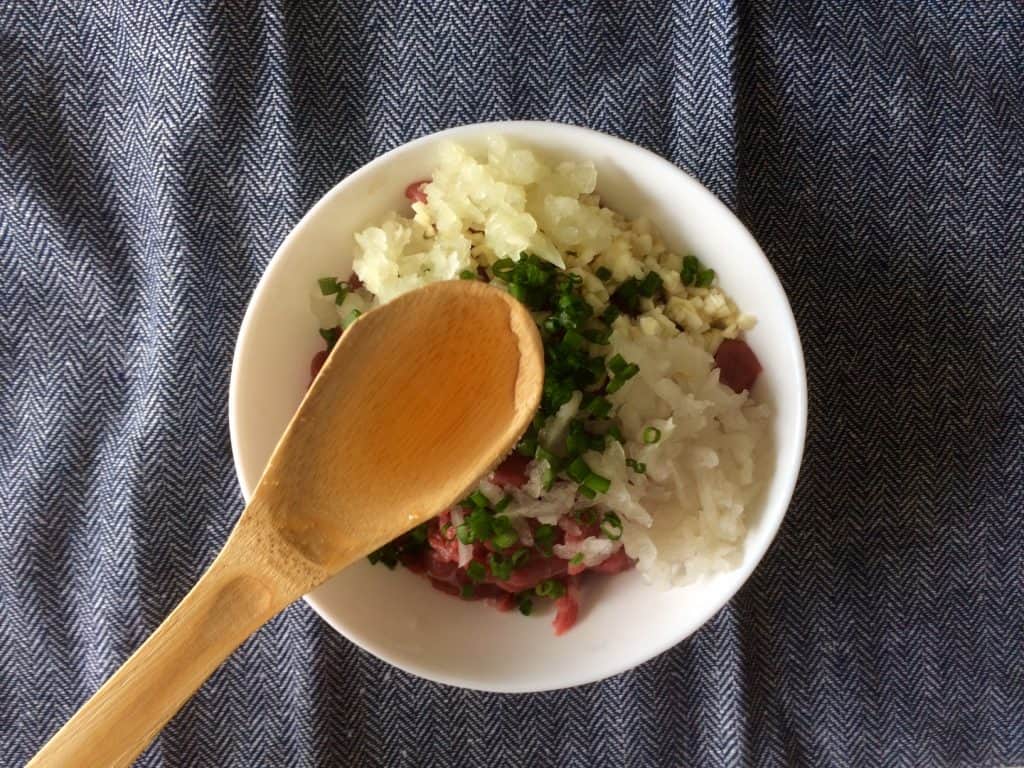 Pour in 2 tablespoons of light soy sauce. Most asian recipes incorporate a mix of both soy sauce and salt. Soy sauce adds color and a more savory type of saltiness whereas salt is to round out the saltiness and bring out the flavors of other ingredients. 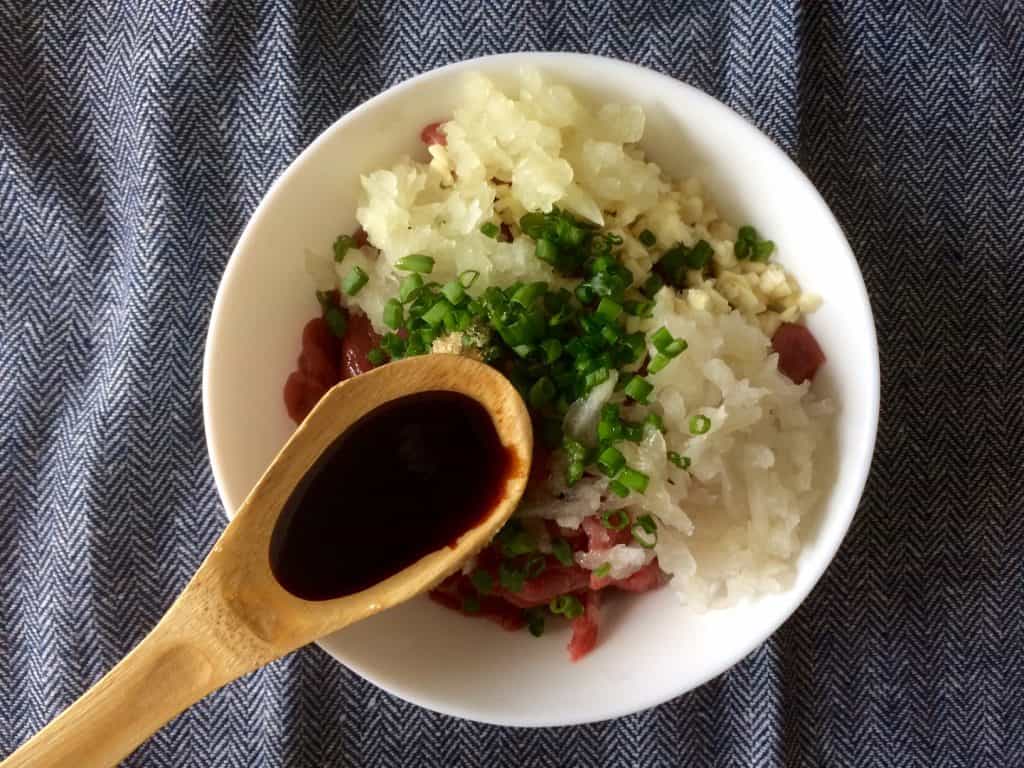 Season with a generous pinch of salt and ¼ tsp white pepper. Black pepper is fine too. When in doubt, always under season as it can be added on later. 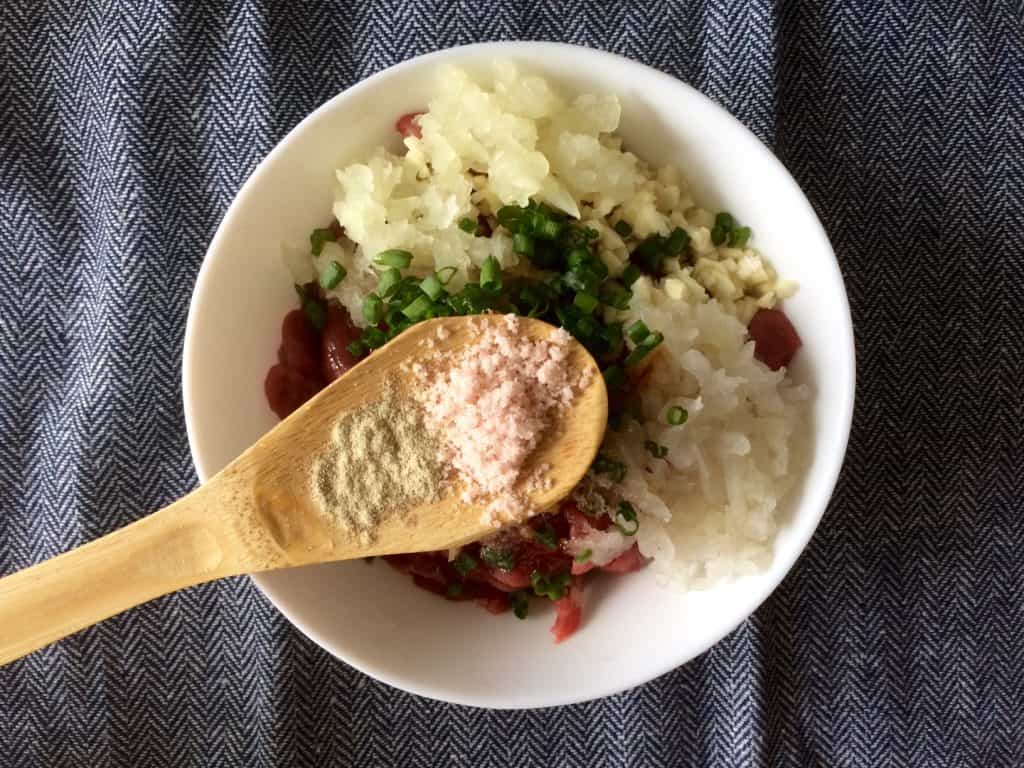 STEP EIGHT – LET THE BEEF REST IN THE FRIDGE

Now that all the seasonings have been added in. Mix everything well together (even better if you can use your hands to massage everything into the beef), cover with cling wrap or a slightly damp cloth and let it rest in the fridge for an hour or so to allow the flavors to absorb into the meat. 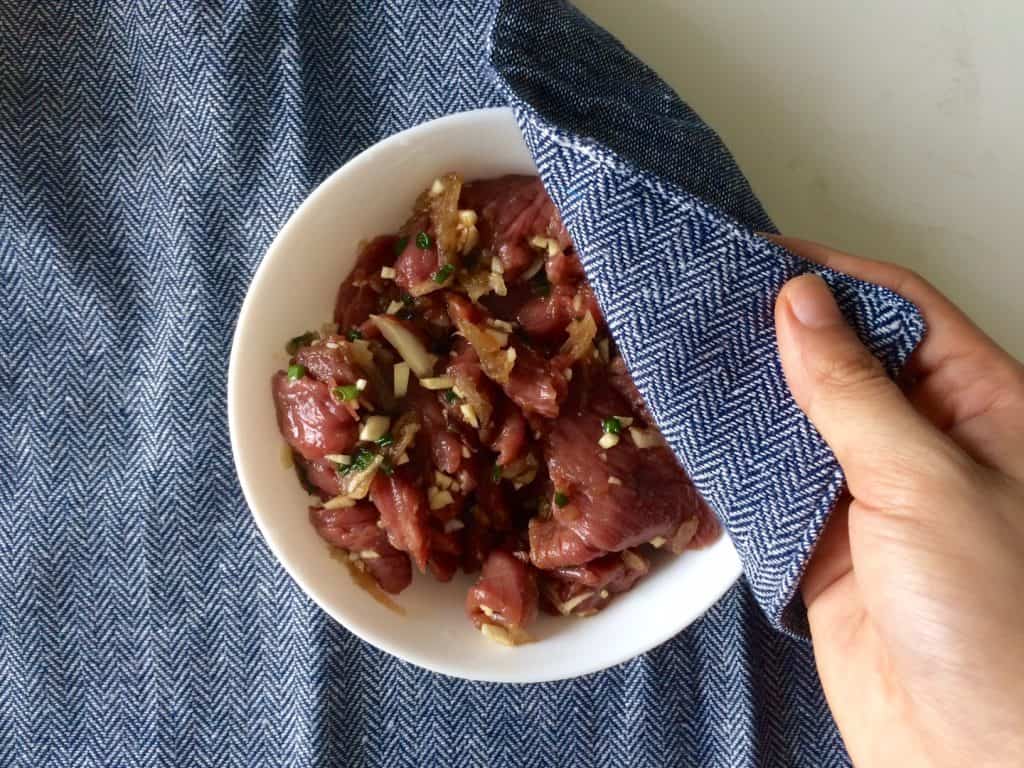 STEP NINE – STIR FRY THE BEEF OVER THE STOVETOP

Into a hot pan or wok, add two tablespoons of vegetable oil. Fry the beef on high heat JUST until it’s no longer pink. Remove from the pan and set it onto a plate immediately as the residual heat will continue cooking it slightly. If you want to know more on Stir-Fry 101, check out our stir fry article here! 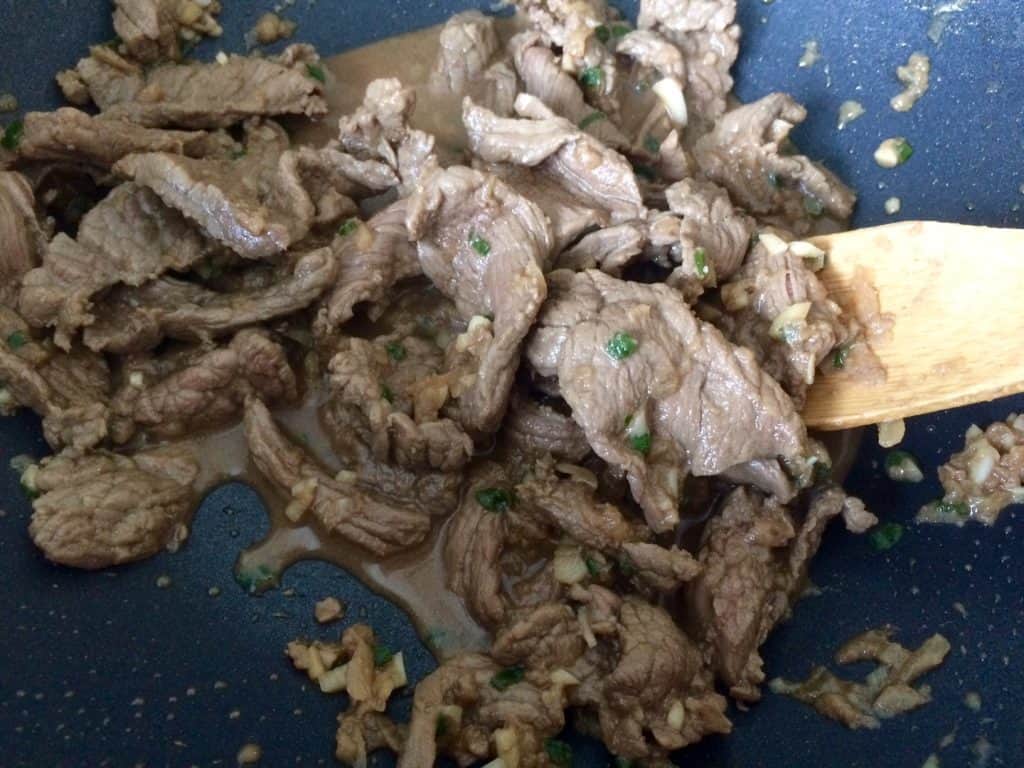 STEP 10 – SET OUT ALL THE COMPONENTS

We’re nearly there! If you’re serving these delicious bulgogi lettuce wraps to your family or friends, set out each component separately on the table so that everyone can be more involved by customizing their own wraps. The components include freshly steamed rice, just-made bulgogi, gochujang (hot pepper) paste and lettuce leaves. After rinsing and drying the lettuce, store them in the refrigerator for 10 minutes or so just to let them crisp up. This hack solves all your soggy lettuce woes!

When wrapping, spread a little bit of gochujang paste onto the lettuce leaf before spooning over a tablespoonful or so of rice, followed by the bulgogi. Be sure to make extra as the bulgogi will be the main star! 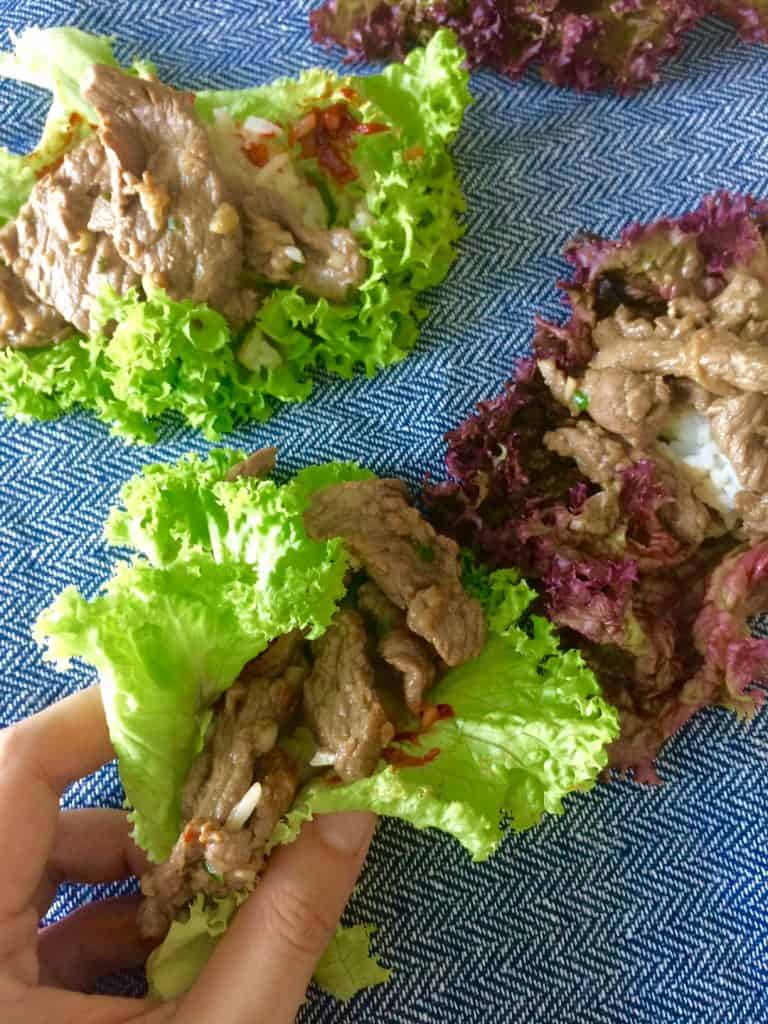 These beef bulgogi wraps are a great way to serve a crowd and is a great way to make conversation over food as well! If you’re organizing a summer barbecue, that’s even better as bulgogi is delicious grilled over charcoal. Feel free to serve it without rice, although using a carb source will help to balance out the meal and fill guests up. Bulgogi can also be made with chicken, pork or even tempeh for a vegetarian version!

How did your bulgogi turn out, did you add any extra ingredients to the wraps such as radish pickles or kimchi? Let us know in the comments!