I love an Asian influence to my pork roast as well for the simple reason that I delight in figuring out the ingredient puzzle that comes from the sweet, salty, sour, and spice flavor mixture of eastern cuisine. This kind of food not only satisfies my belly, but it allows my mind to be entertained while I eat. This pork roast does just that.

Speaking of flavor, this pork roast boasts a clear oriental influence with a homemade Chinese five spice mixture; a blend of star anise, peppercorns, cloves, cinnamon, and fennel. It makes just enough for this pear sweetened marinade, but can easily be doubled, tripled if desired to use it in other recipes. With the ginger and garlic, this mixture takes care of the “spicy”, especially if the Sichuan peppercorns are used, portion of the complex taste that is so well loved in Asian cuisine.

For sweet, it’s all about the pears. If they are available, a good Asian pear is what would be desired for this recipe, but that isn’t always possible. That was the case in this recipe. Ripe Bartlett pears will do the trick with their soft, sweet texture. Not only do pears give a bit of natural sugar and a specific flavor to the marinade, they also lend a hand in tenderizing the meat.

The last of the intricate flavor infusion happens to be the easiest to incorporate into the thick liquid that will give this pork roast it’s desired coating and taste. Rice vinegar’s sour component helps the pear force the raw pork relax while pulling the rest of the marinade deep into its fibers. Soy sauce does the job of that salt is designed to do, outside of preserving food that is, which is to draw out the subtle flavors that are hidden deep within the ingredients.

When cooked the robust liquid seeps throughout the pork roast and mellows as the heat marries it into the meat. On the surface, where the marinade clumps together with the onion and thicker bits from the seasoning, a sweet sticky crust forms to the savory roast to make perfect bites of savory, sweet, and tangy! 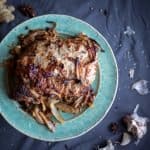 Some of the best pork roast cuts for this recipe are the shoulder, butt, loin, belly, or leg. Choose your favorite.

The ground spices are to make a quick Chinese 5 spice and it can be substituted for the spice mixture in the recipe. The garlic paste and be replaced by mincing about 3-4 small garlic cloves. The peppercorns used in the recipe can be subtle black peppercorns which are better for sensitive taste buds, or spicy Sichuan peppercorns for those who like a bit of heat to their food!

STEP ONE – GRIND THE SPICES

Place the star anise, peppercorns, cloves, cinnamon, and fennel seeds in a mortar and grind them as finely as possible with a pestle. Alternatively, use a spice grinder to grind the spices. 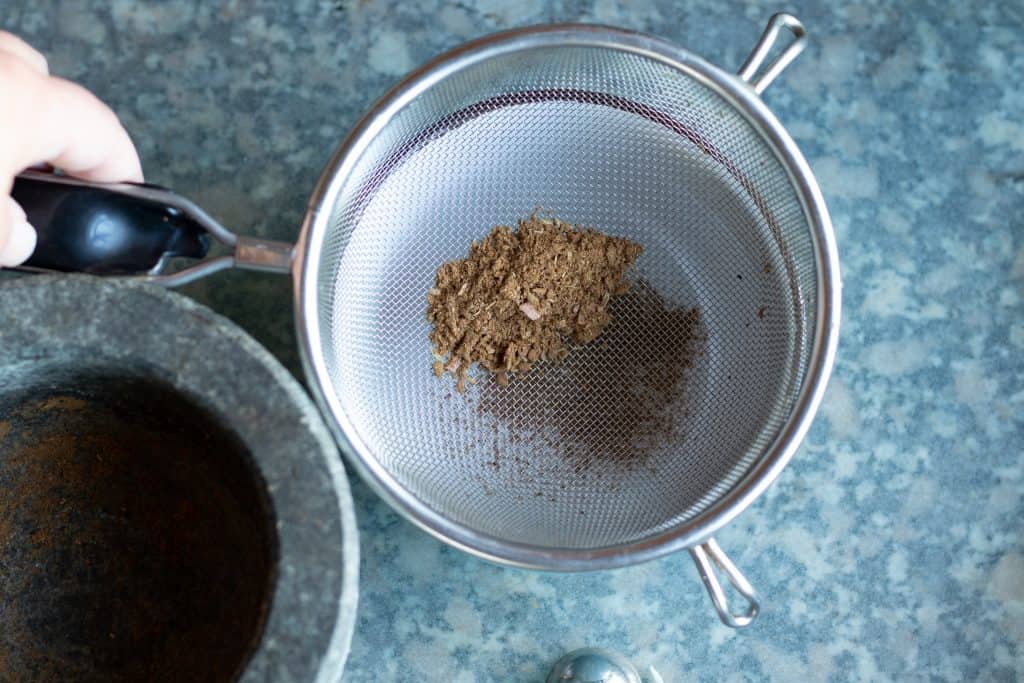 Place a fine mesh sieve over a bowl and use it to remove any large leftover pieces of the spices. Save the finely ground spice. 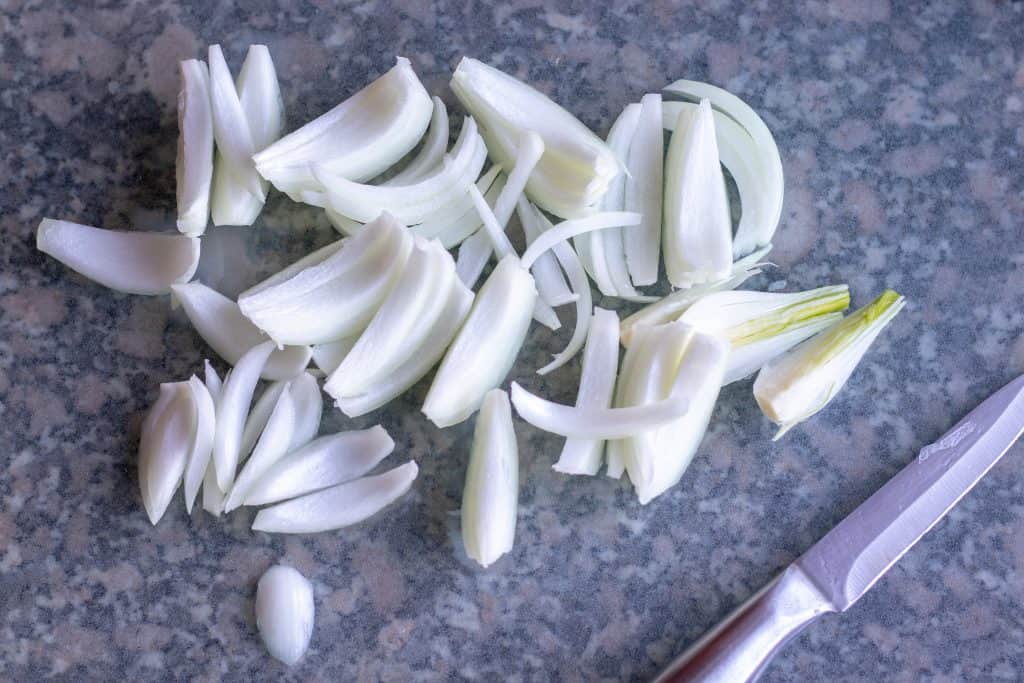 Remove the outer skin of the onion and trim the root end. Cut the onion in half and then again into quarters from root end to the tip to create wedges. Continue to cut it in this fashion to make many thin wedges. 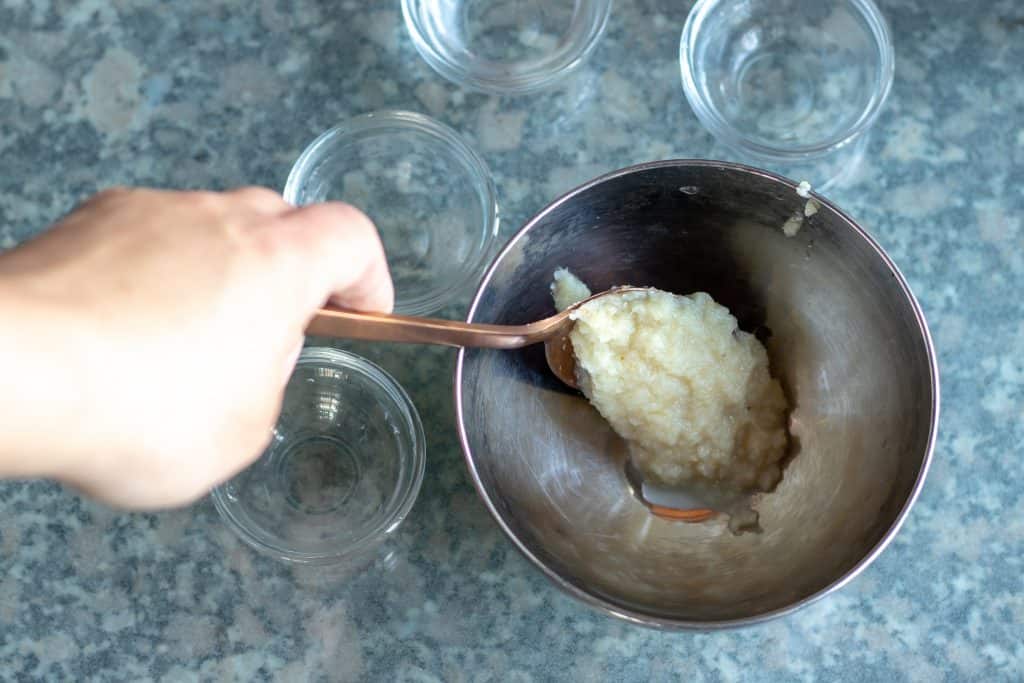 Spoon the garlic paste into a bowl. Sprinkle the ground spice mixture into the bowl with the garlic. Stir in the sesame oil, soy sauce, and vinegar. Peel the ginger and grate it on the fine grate of a cheese grater or use a microplane and add it to the mixture. Stir well. 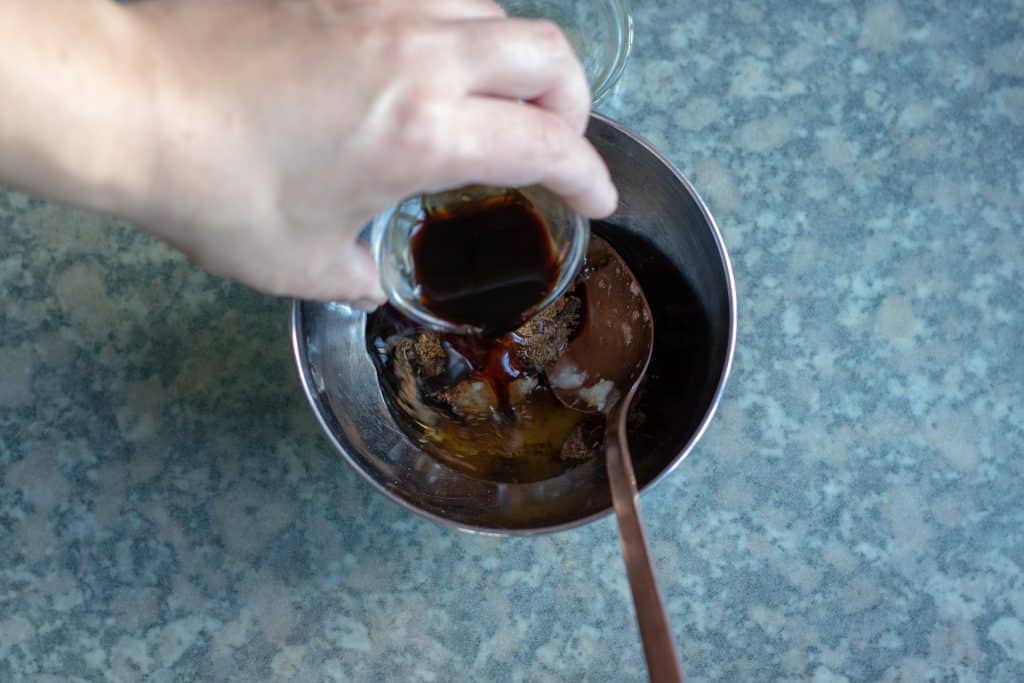 Grate the pear on the cheese grater, peel and flesh, until it’s down to the core. 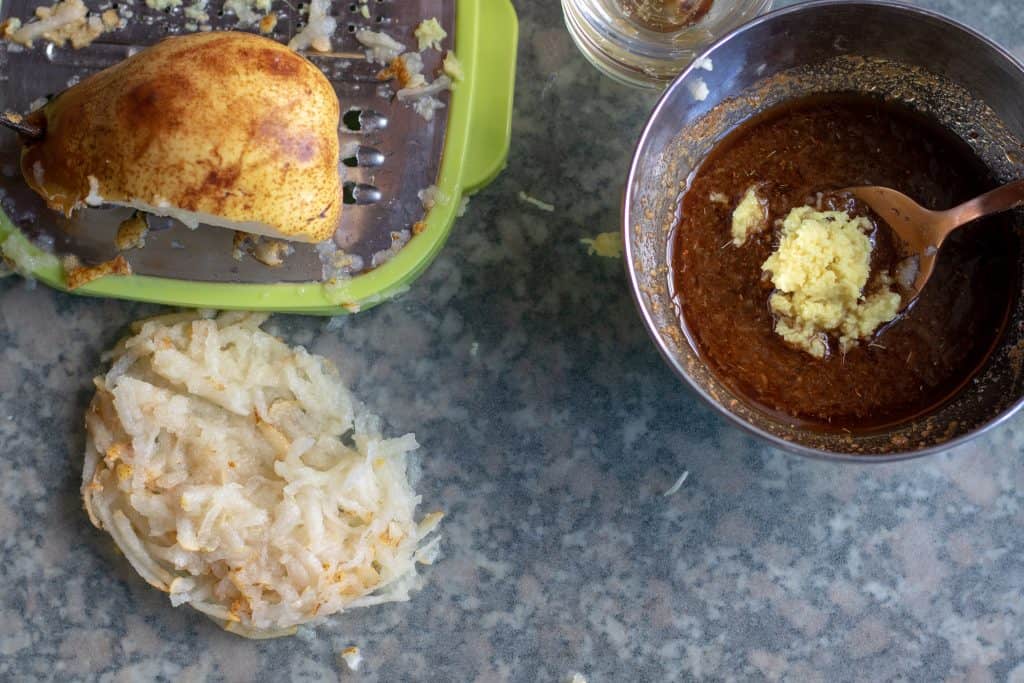 Add it to the marinade and mix until it’s completely infused with the seasoning. 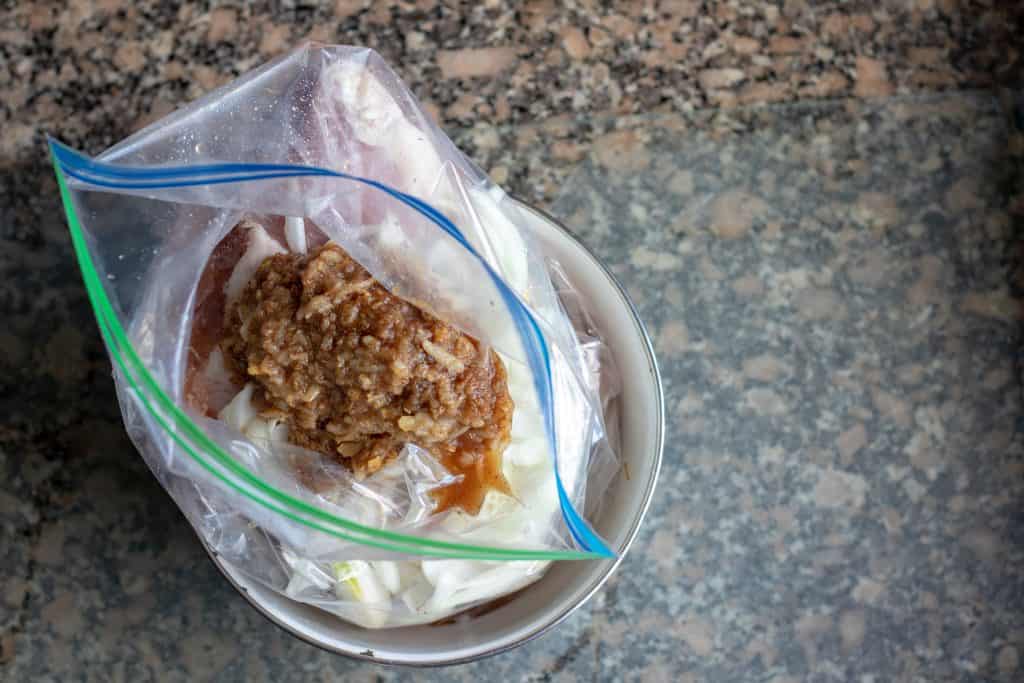 Open a large resealable bag and set it up right before putting the pork roast into it. Add the onions to the bag with the roast and pour in the marinade and seal the bag, removing as much air as possible. Mix the marinade around the roast and onion by using your hands. Put the bag in a large bowl in case of any leaks, and refrigerate the roast for at least 6 hours or overnight. 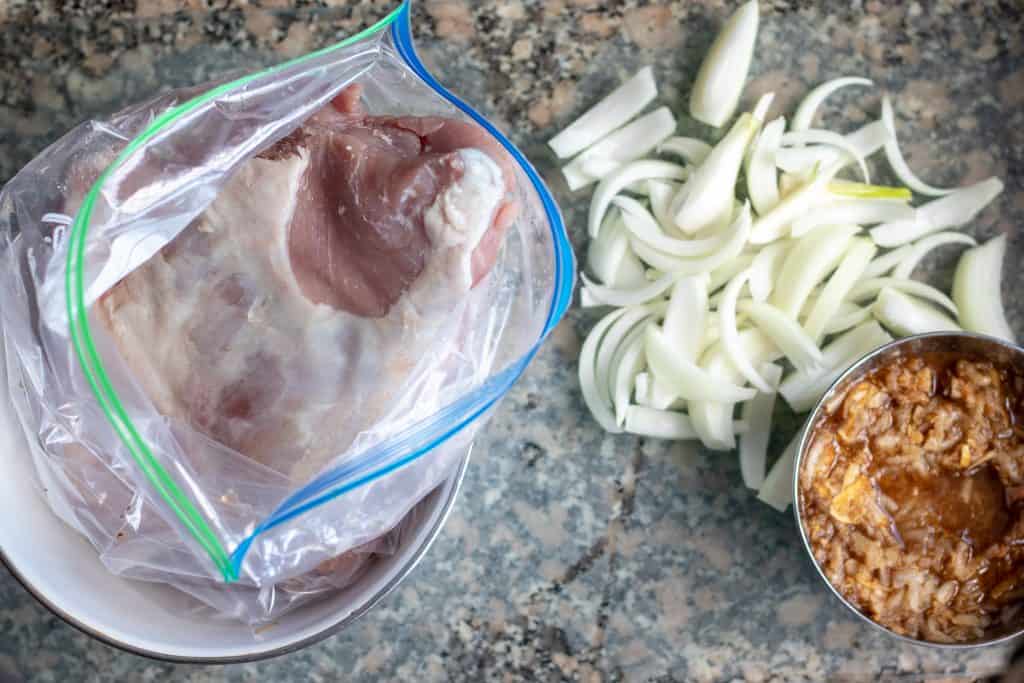 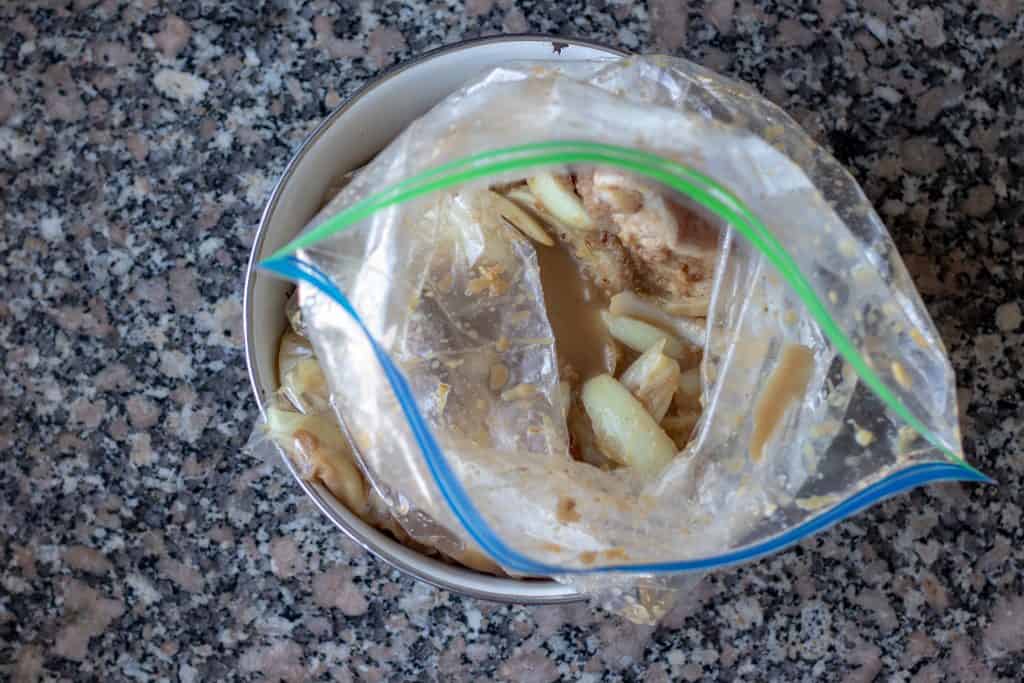 30 minutes before cooking the roast, turn the oven on and preheat it to 350F. Take the roast out of the fridge and allow it to warm up to room temp while the oven preheats. 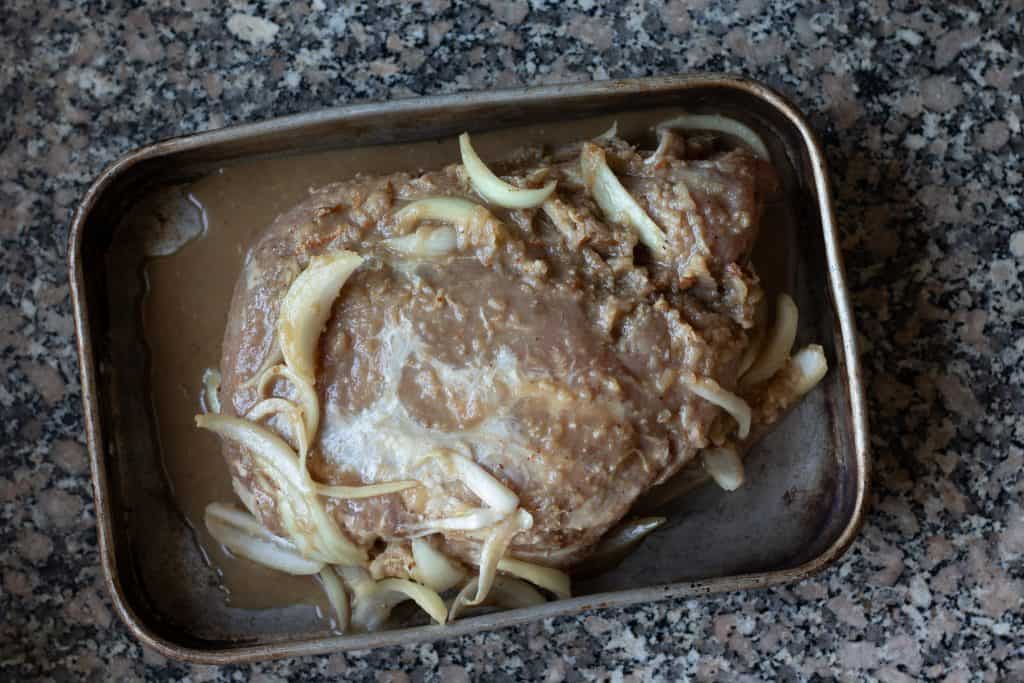 Open the marinating bag and transfer everything to a roasting pan. Cover the roast with aluminum foil. 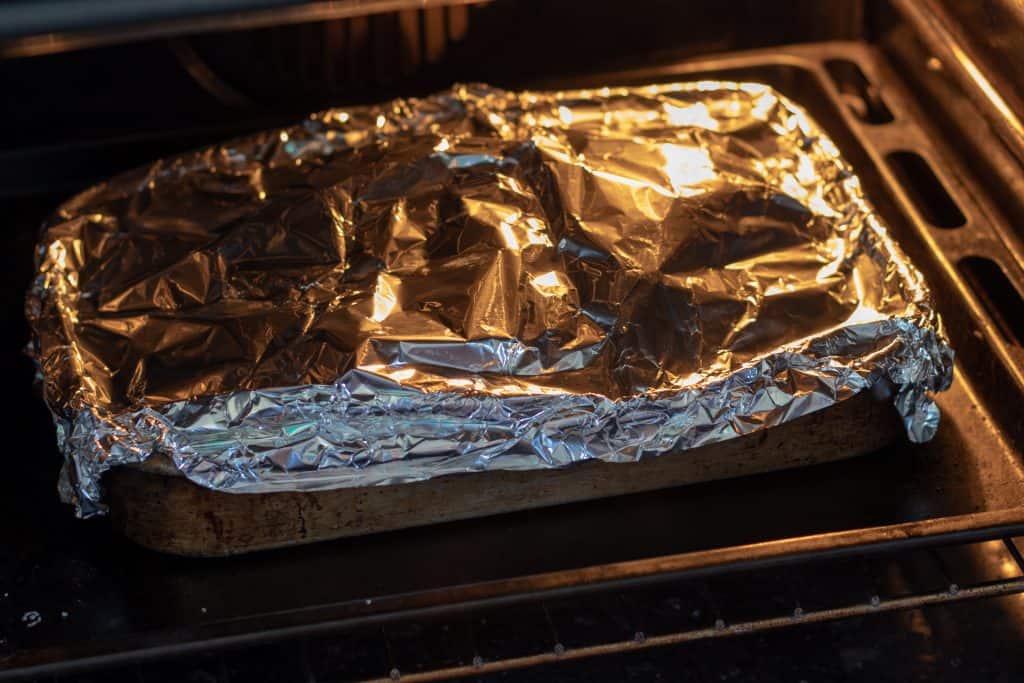 Once the oven is hot, place the roast into it and allow it to cook 20 minutes. 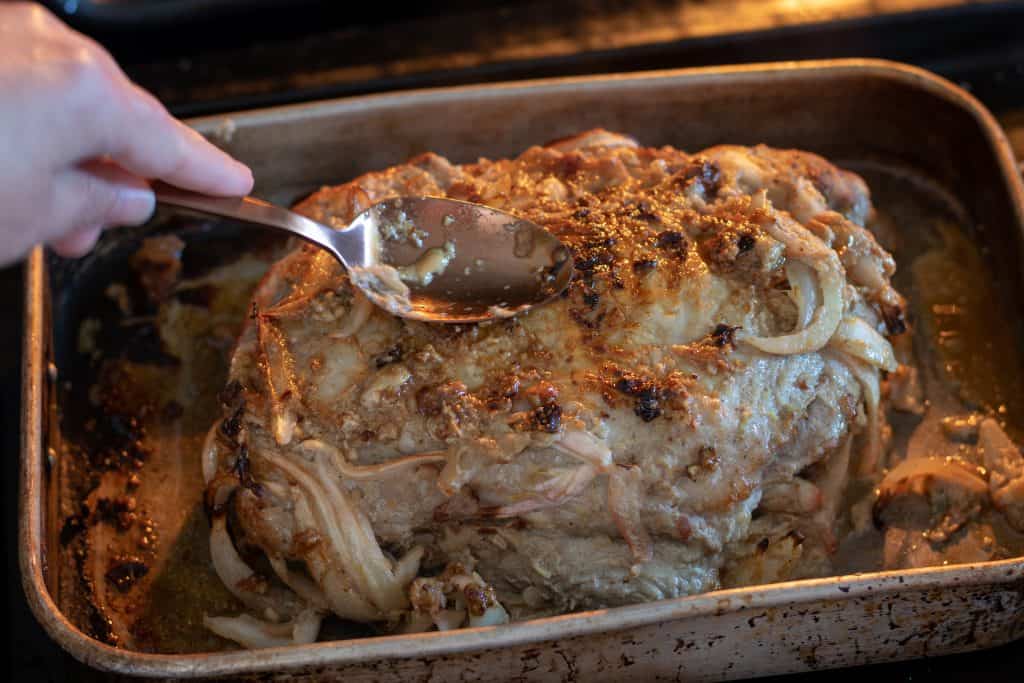 Take the roast out and remove the aluminum and spoon the marinade seasoning and juices on top of the roast.

Cover the pan with the aluminum again and return the roast to the oven for another 20 minutes.

STEP SEVEN – BROWN THE OUTSIDE OF THE PORK 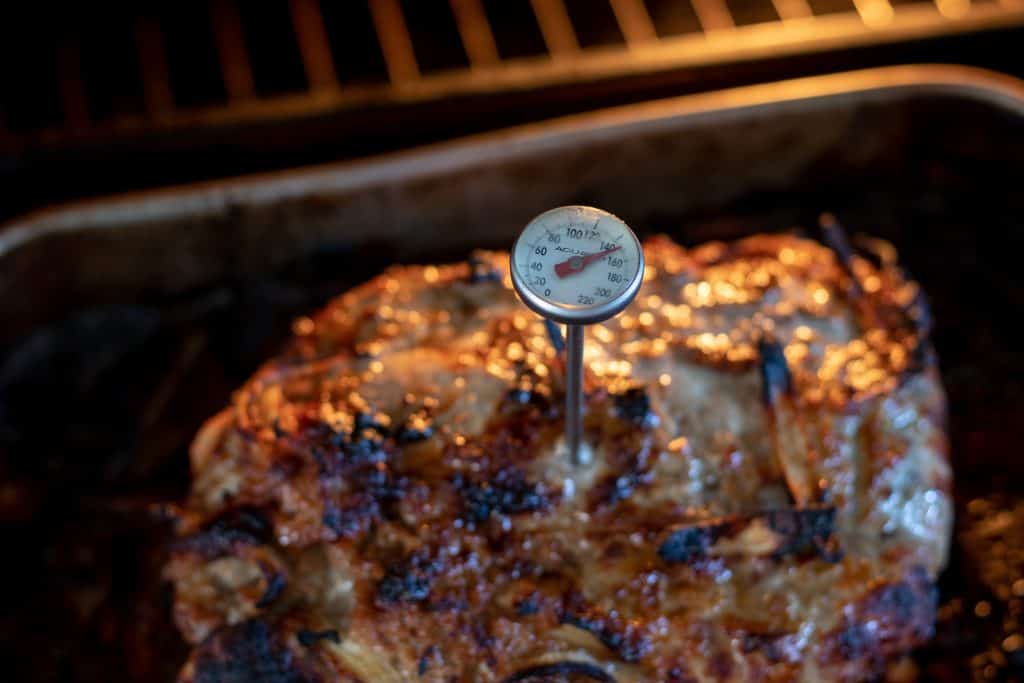 Remove the aluminum completely from the pan and save it for after cooking.

Turn the heat up on the oven to 400 F and allow the roast to brown and the seasoning on the outside to caramelize a bit. Check the temperature with a cooking thermometer and when it reaches 145F, remove the roast from the oven. 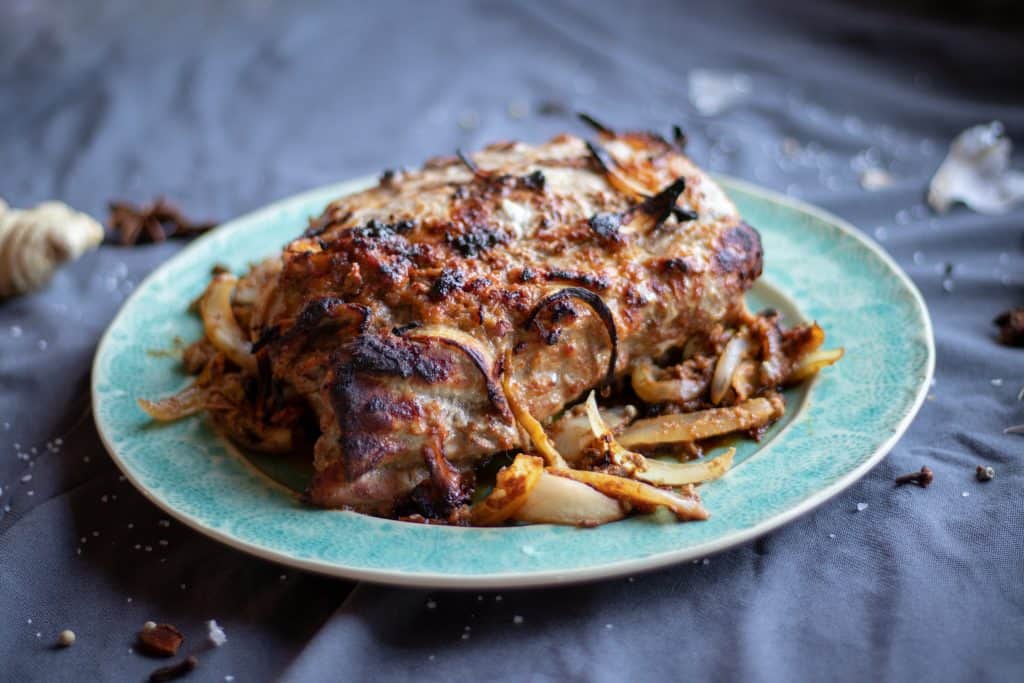 Take the reserved aluminum and tent it over the pork. Allow it to rest 5-10 minutes to allow the juices to spread back out into the rest of the meat before serving. Serve immediately.

This sweet, savory, and just a little bit sticky pork roast doesn’t have to be just for the indoor oven. A little adaptation for the grill or outdoor oven can be made and will make this roast easily enjoyable year round!