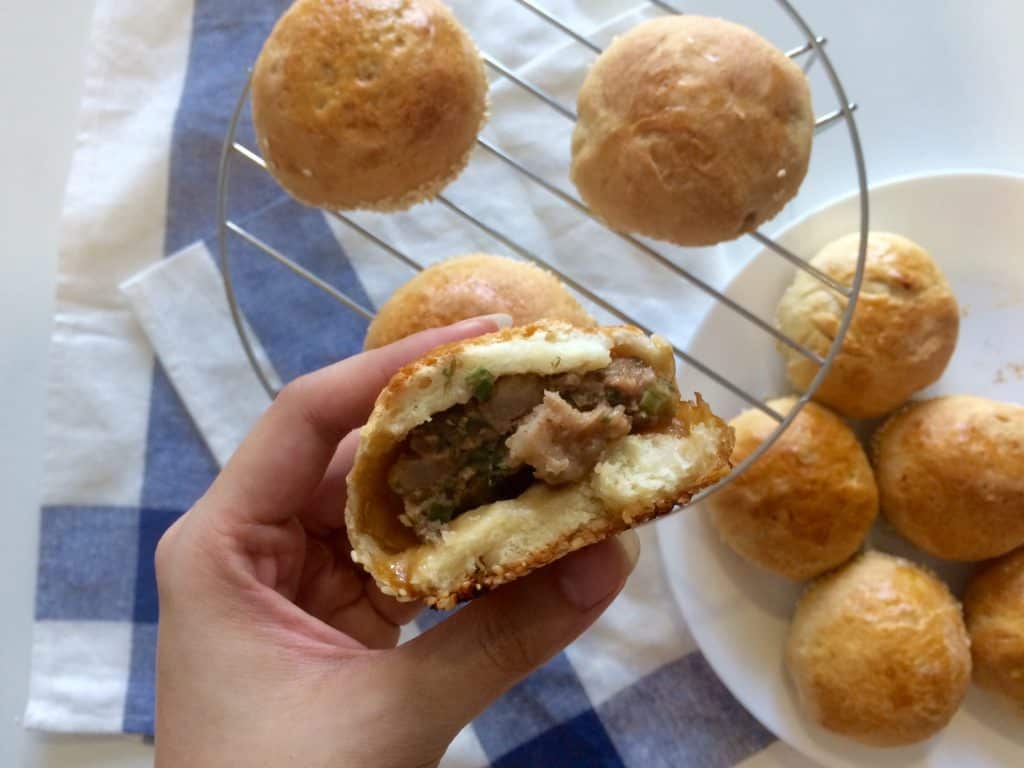 Have you heard of Taiwanese Hu Jiao Bing? It literally translates to Pepper Biscuit! But don’t let the name fool you, these pepper pork pies are so much more than that.

Hu Jiao Bing are pastries filled with a mixture of pork, scallions and fragrant with aromatics and white pepper. The crust should be crispy but not doughy whereas the filling should have the right ratio of lean meat, fat and chopped scallions. Traditionally from Taiwan, these are an immensely popular street food at night markets which are abundant throughout the country. At one specific market called Raohe Night Market, tourists and locals alike are willing to wait in line for over an hour just to get a taste of the famous pepper pork pies there which are one of the major attractions of the market.

This recipe can be altered in many ways to suit your liking. Typically, the chopped scallions are stuffed into the bun separately with the meat filling instead of incorporating it in altogether. This is done so that the flavors of the fragrant, pungent scallions are more pronounced. However, I’ve gone against the norm by mixing it in together with the pork filling, simply because it’s so much easier to wrap. For most home cooks, we rarely tackle recipes like these are they can be very time-consuming. Many people end up putting in less filling as it makes the wrapping process so much easier. Unfortunately, what you get in return is a sad pastry with little meat and all crust.

There are a few key components to ensuring a fail-proof pepper pork pie, so do take note of the step-by-step instructions! 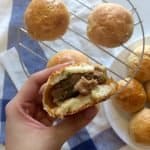 STEP ONE – MINCE THE PORK BELLY 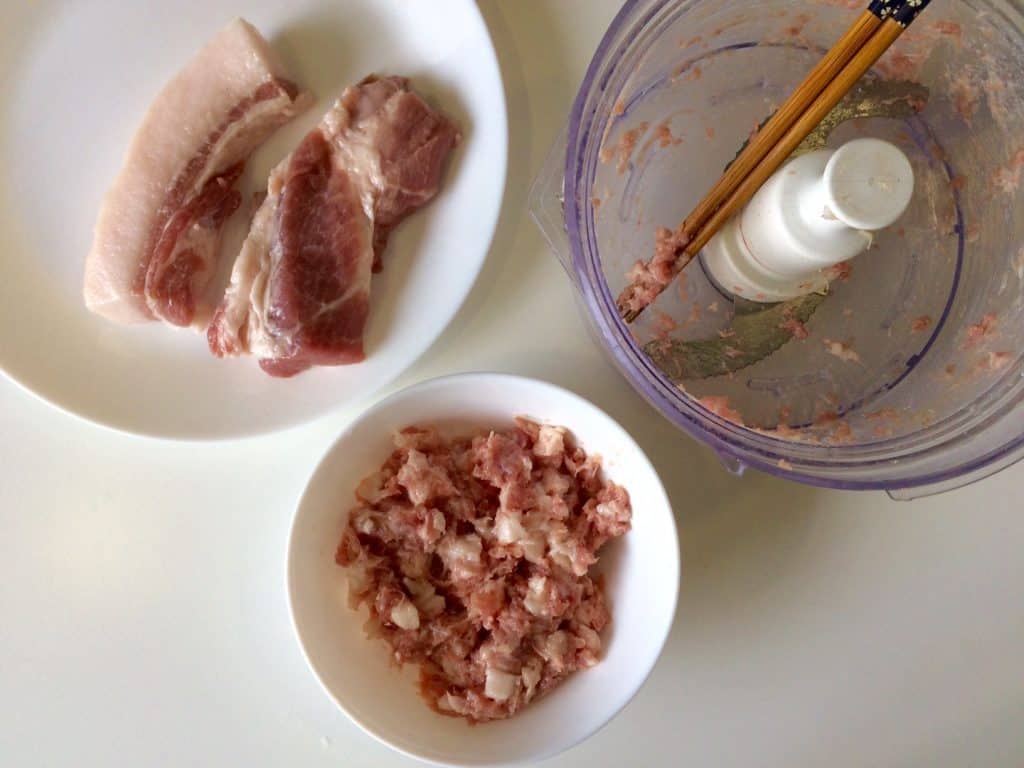 When choosing your pork belly, make sure it’s firm, pink and bounces off ever so slightly when poked with a finger. Remove the rind. Now, here is where you adjust the ratio of your fat to lean meat in the filling. If you prefer a leaner mix, remove as much of the fat from the pork belly as you desire and store in the freezer to use as lard for cooking. Alternatively, you can just buy ready minced pork. Omit this step if you prefer a juicier mix. Use a food processor to grind the pork belly to your desired consistency. It’s recommended to maintain slightly larger bits as the filling will have more textural bite to it.

STEP TWO – MIX IN THE SCALLIONS 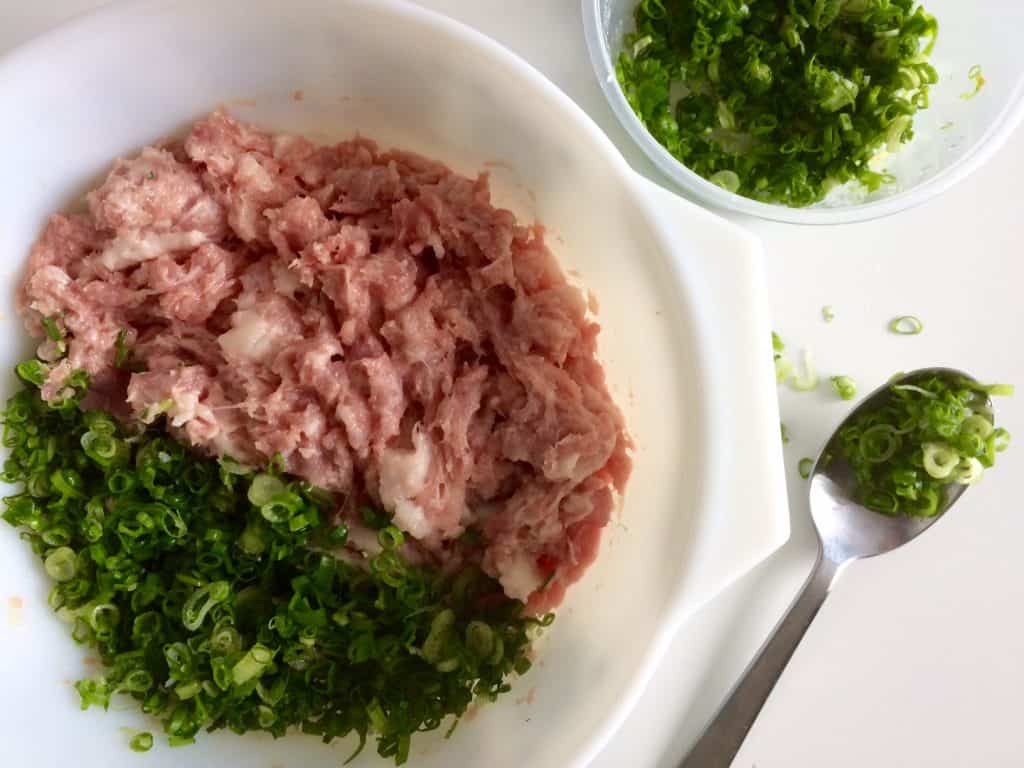 Mix in the chopped scallions into the pork. If you want the flavor of the scallions to be more pronounced, chop them roughly instead of finely as I’ve done here. If you will be serving these to people who may not be a huge fan of the taste, you can also use fewer scallions and chop them more finely. 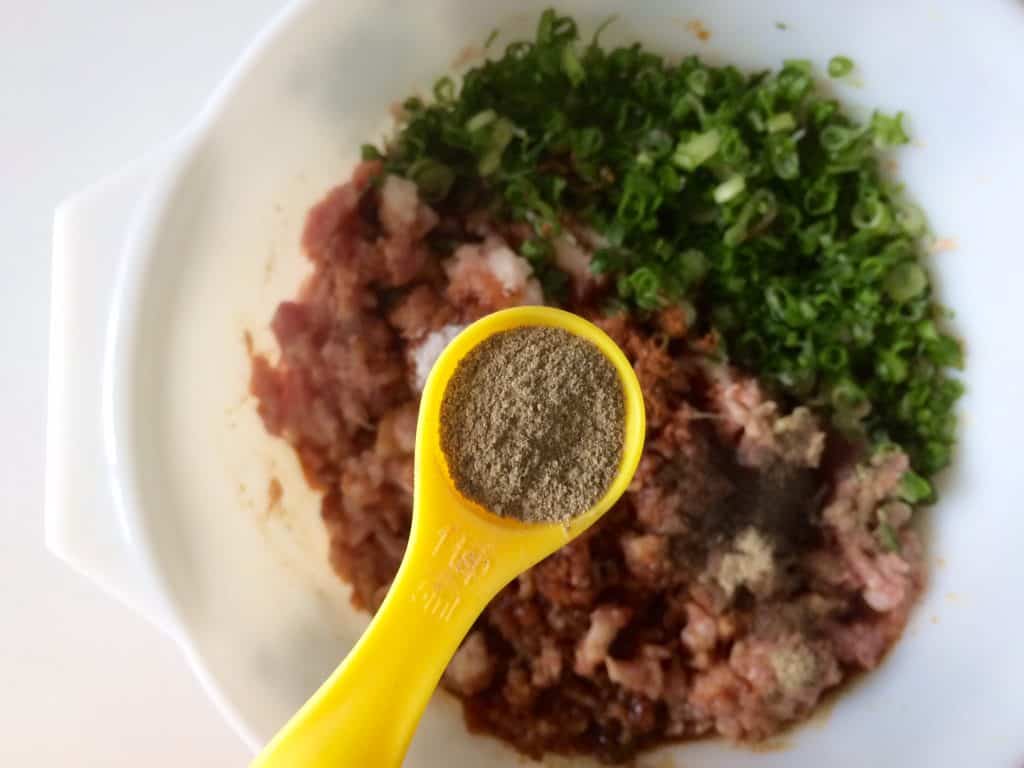 Add in the rest of the ingredients, don’t worry about over-seasoning as the filling itself has to has very strong flavors and be saltier than usual. Because the shell itself is rather flavorless, the filling will have to make up for it as well.

STEP FOUR – MIX THE DOUGH IN ONE DIRECTION 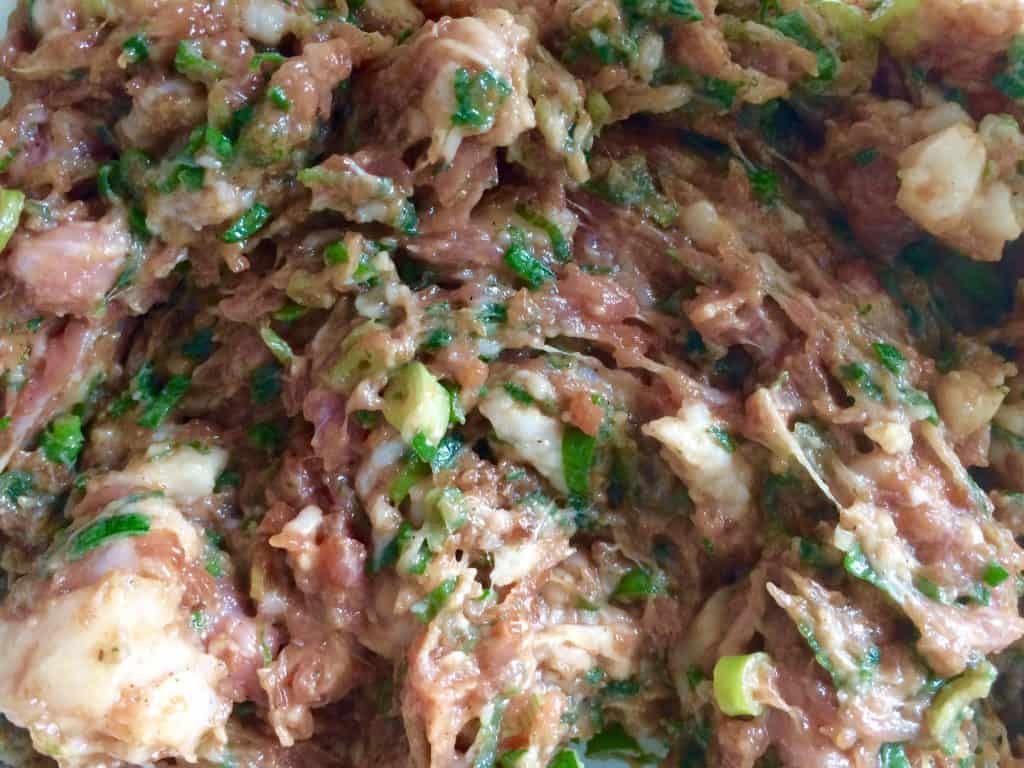 Using a fork or chopsticks, start mixing the dough either clockwise or anti-clockwise until you see the fat start to form threads like this. Using a tool with a smaller surface area will make the job easier as there will be less of the mixture sticking to the tool. Cover and let it marinate in the fridge as you prepare the dough. 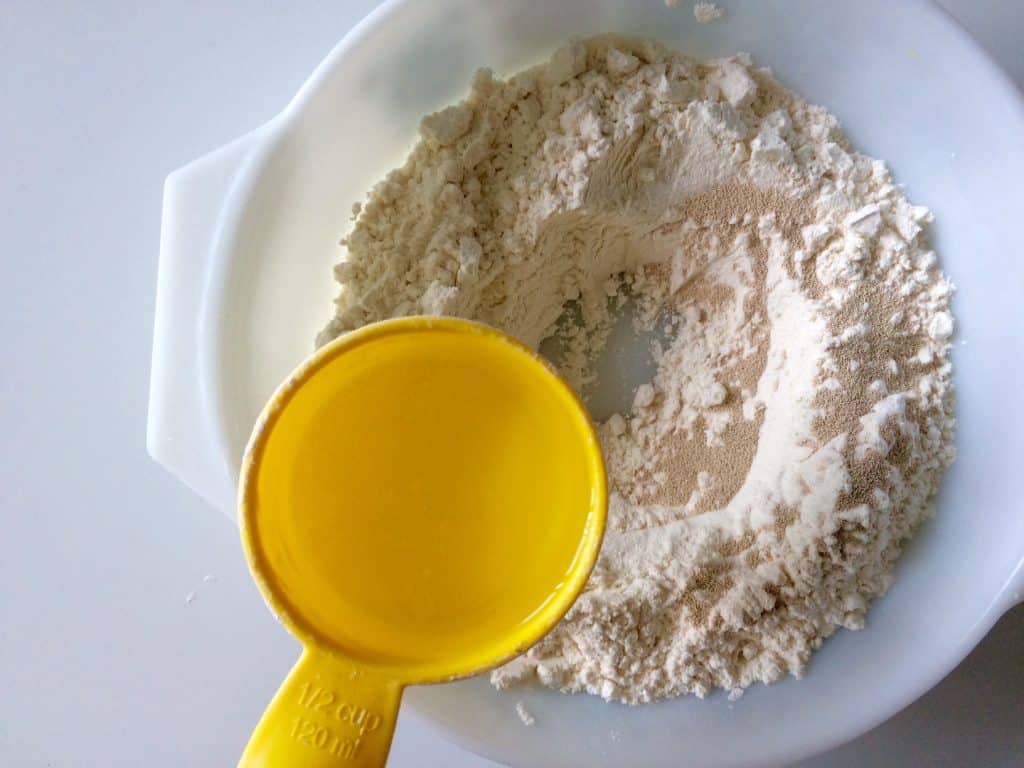 Measure out the flour, sugar and yeast and pour into a dry bowl. Make sure your water is warm at roughly body temperature. If it’s too cold, the yeast won’t activate and will be killed off if the water is too hot. Create a well in the centre and pour in ½ cup of water first. If the mixture is too dry and flaky, slowly pour in more water until you’re able to form the dough into a single ball. (there will still be a lot of flaky dry bits.) Depending on the climate, you might need more or less water. I ended up using ¾ cup of water. 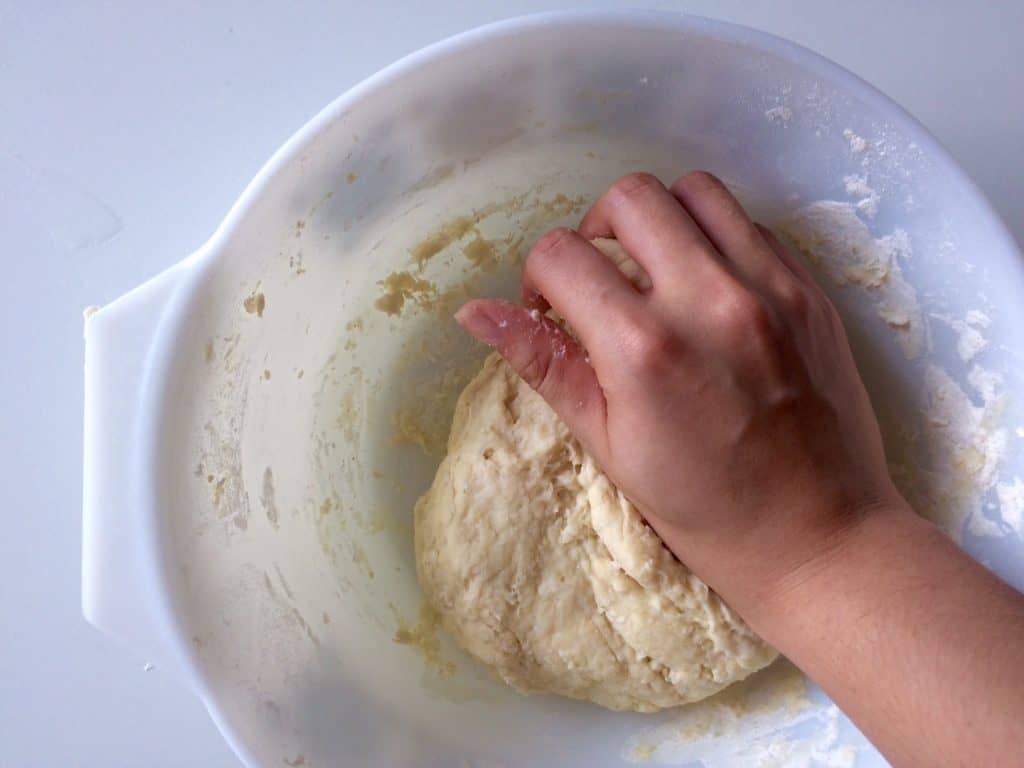 Now, add the oil into the mix. Knead the dough until it starts to become glossier and smoother. It will also start to have a bouncier texture. This will take about 5 minutes or so. If you’re making a small batch, you can just knead it directly in the bowl. If not, turn it out onto a lightly floured board or tabletop. 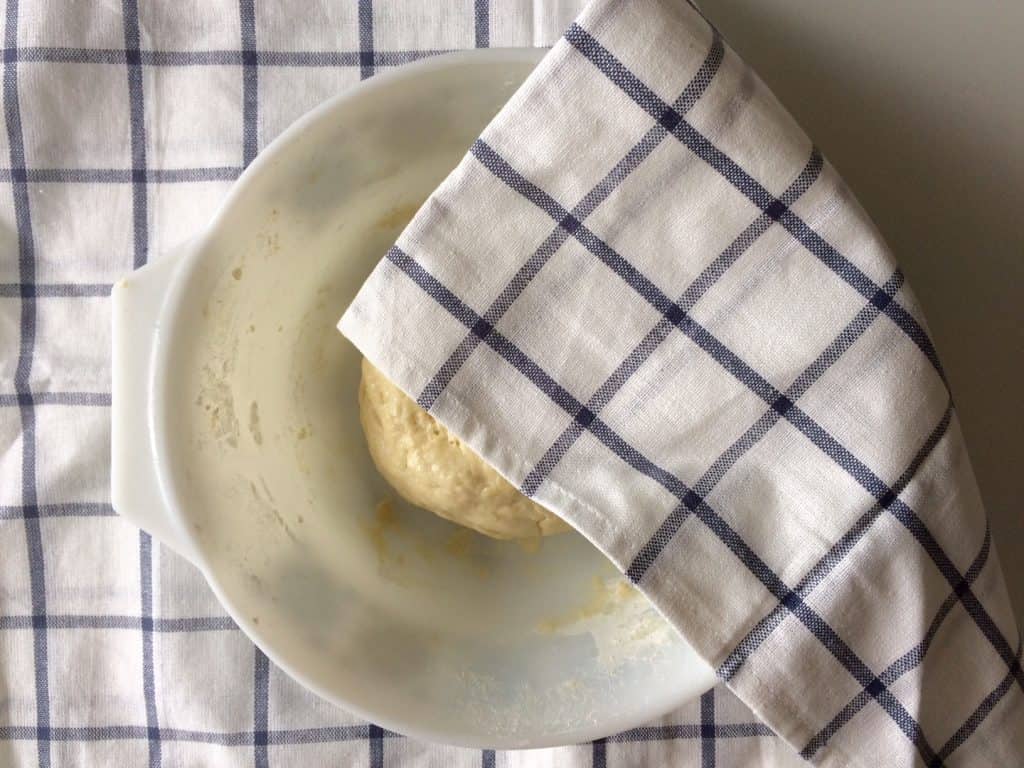 Form the dough into a ball with a rounded, even surface. Place the dough into a bowl large enough for it to expand. Cover with cling wrap or a lightly damp cloth and let the yeast do its action in a dark, warm area.

STEP EIGHT – PUNCH OUT THE AIR 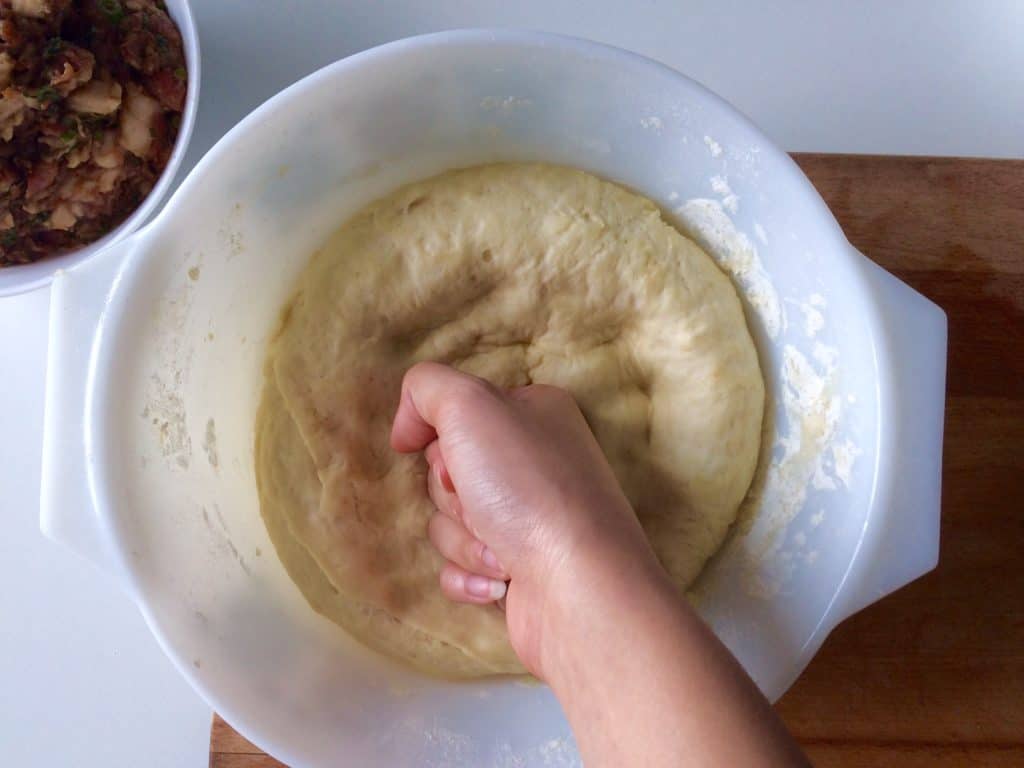 Wait until the dough has risen to roughly twice its size. This may take longer if your climate is colder and drier. For the warm and humid climate I live in, it took about 50 minutes. After that, simply punch the dough down the middle to remove the gas bubbles formed by the yeast.

STEP NINE – CUT THE DOUGH INTO 8 EVEN PIECES 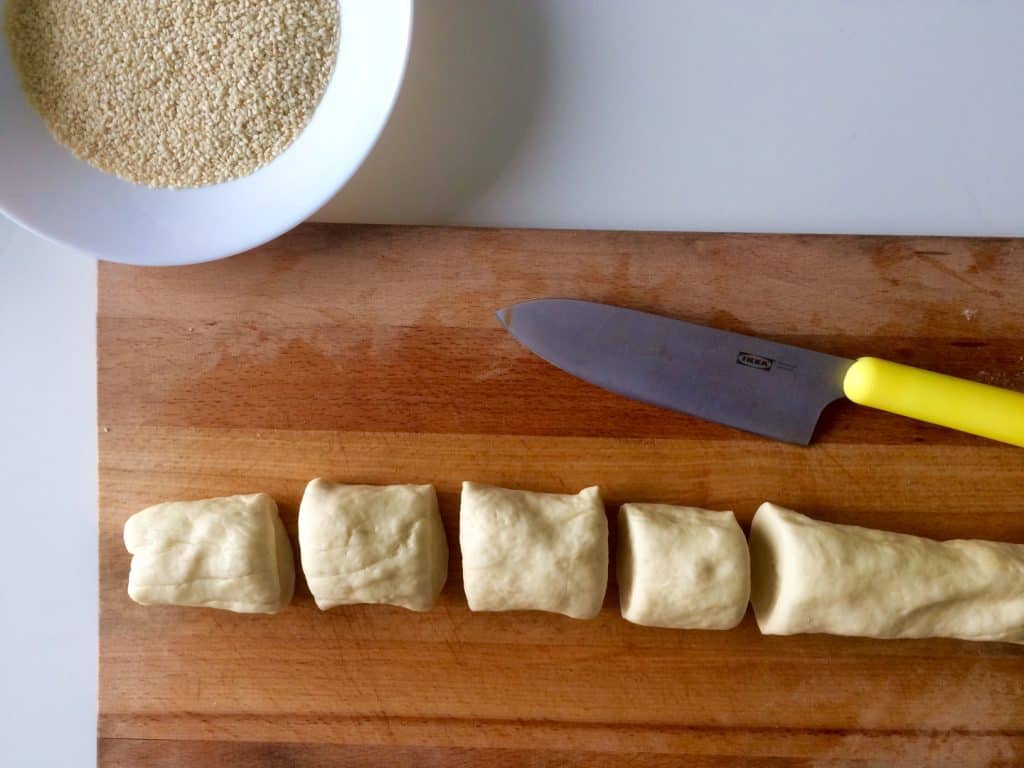 Roll out the dough into an even cylindrical log.  Divide it into 8 equal portions with a knife. You may end up having to separate it into up to 10 pieces depending on the volume of dough. Roll each piece into a ball.

STEP TEN – WRAP THE PIES AND DIP THEM 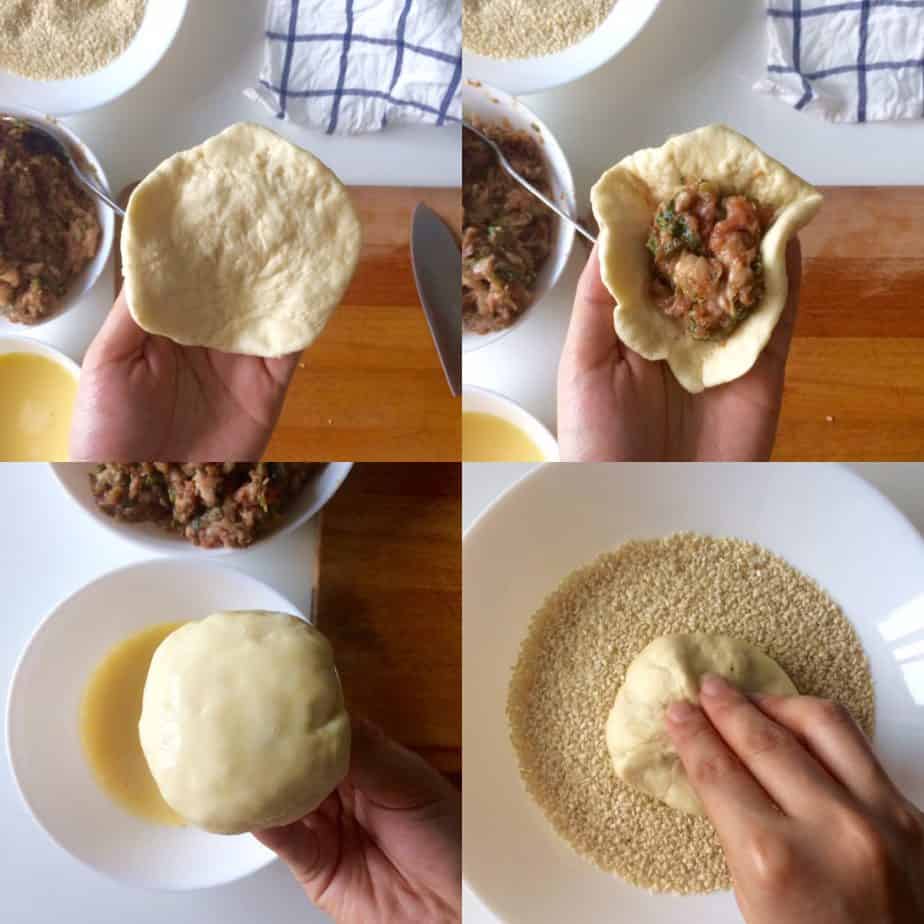 Flatten out each dough piece by simply pulling with your fingers while spinning, no rolling pin needed here. Cup it in one hand and place a generous spoonful of filling into the middle. Try to fill as much as you can. Seal off the edges by pinching them. By holding the pinched side, dip the smoother surface into the egg wash and then into the sesame seeds. Make sure your sesame seeds are untoasted as they will burn and become bitter if using toasted ones. While you’re doing this step, preheat the oven to 200 degrees Celsius. 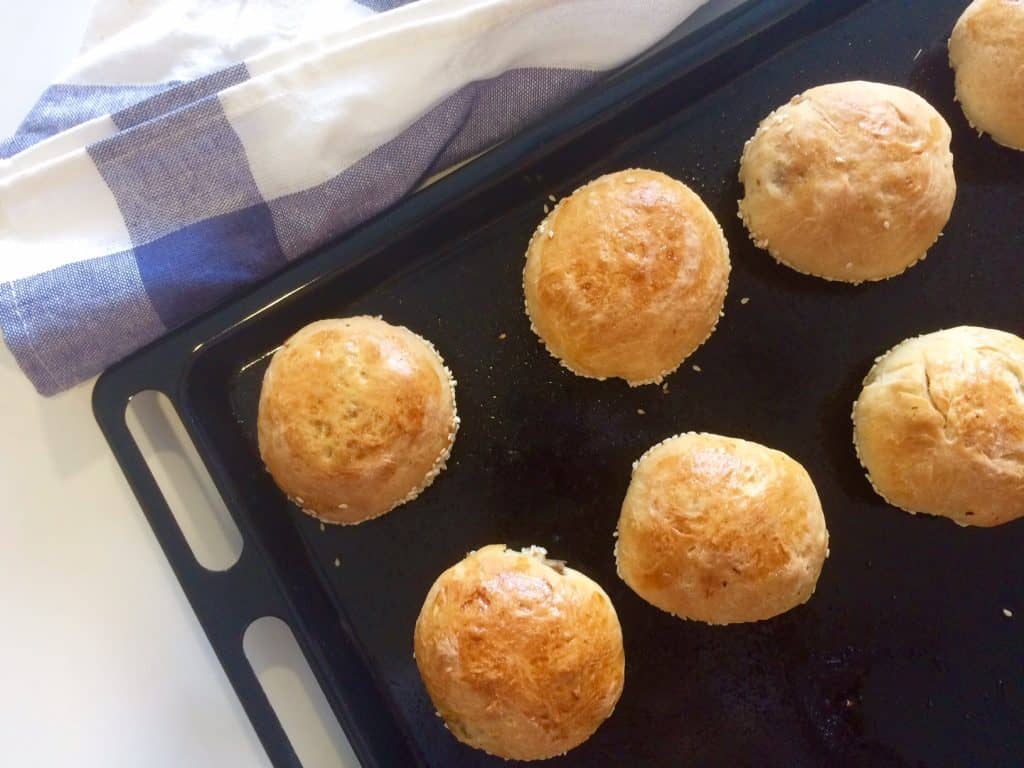 Brush the tops of each pie with egg wash so that it will be crispier and for better color. Bake in a preheated oven at 200 degrees Celsius for 15-20 minutes or until golden brown and crispy. You can test if its done by tapping the surface with a chopstick, it should be hard and the tapping should produce a small sound.

Once done, let them fully cool on a wire rack. These pepper pork pies make the perfect breakfast or a filling snack. They’re very portable and suitable for gifts as well!

This recipe can easily be doubled or even tripled for a bigger yield if you’re serving more. Albeit time-consuming, they’re every bit worth trying!

Feel free to replace the pork with beef, lamb or chicken. Instead of reducing the amount of scallions, you could even completely omit them. A vegetarian version could also be made

by using crushed firm tofu but will have to be braised in the marinade and then dried slightly.

Did you try your hand at this recipe? If so, let us know in the comments if you encountered any difficulties with it! For other recipes using pork belly, check out our Pork Belly Lo Mein recipe!