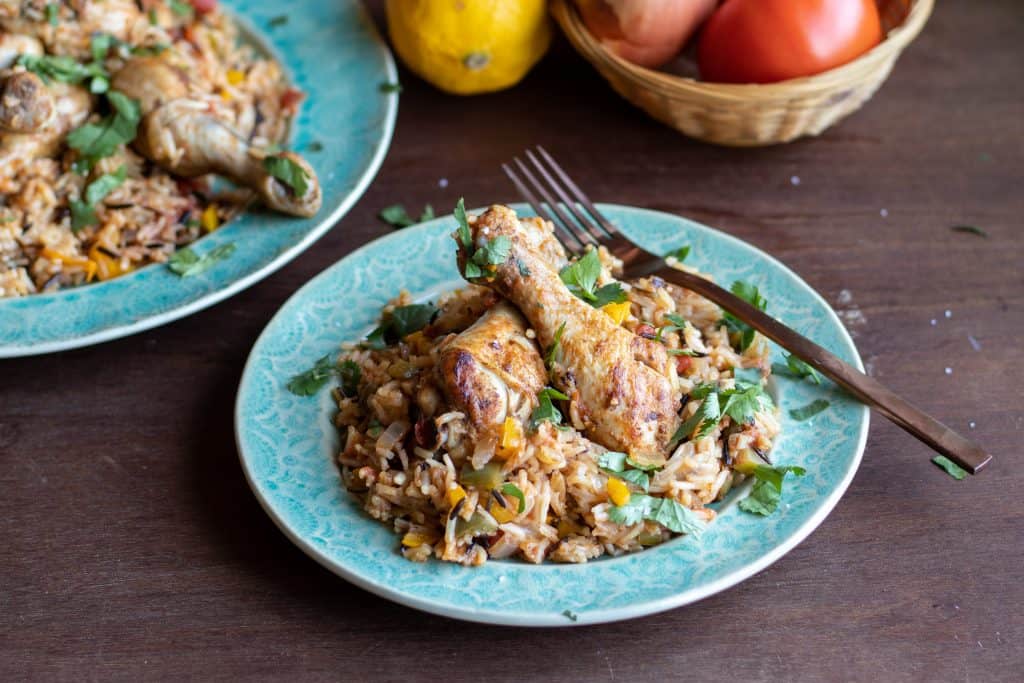 One of my favorite elements when eating at a Mexican restaurant has always been rice. It’s just a tomato infused side, but without it the entire plate seems incomplete! That’s why when I’m making a Mexican inspired feast, I make certain to whip up a batch of this rice.

This rice can be tricky if the steps aren’t followed fairly strictly. That doesn’t mean you can’t play with the flavors or additions of things, but it does mean that the recipe procedure is necessary or you’ll end up with wet rice clumps that just doesn’t meet expectations when what you really want is fluffy, individual rice that has been adequately infused with all that tomato flavor!

For this rice, I don’t use just a basic base of only onion. Green and yellow bell peppers lend their flavor and color to the dish’s basic taste profile. I also make absolutely certain that once that foundation of flavor is made, to toast the rice. This is essential. It will get that onion, garlic, and pepper flavor infused into the rice while pulling out the nuttiness of the rice at the same time. After that, the tomato and broth are stirred in and the rest is just a bit of a wait and a squeeze of lemon juice to brighten the whole pot.

It’s also necessary to note that I used a long grain wild rice as opposed to the usual white rice. I personally enjoy the texture and flavor that wild rice has and I think it really helps with making a fluffy, dry Mexican rice.

This recipe isn’t just about rice though. It includes chicken drumsticks coated in a spice mixture of oregano, paprika, and cumin. These drumsticks are first lightly browned in a pan before adding to the rice before it cooks. The addition of the chicken lets the rice absorb the element of chicken flavor, while the chicken absorbs the essence of the rice, making a pot of food that is completely cohesive.

This may take a bit of extra work, but it’s completely worth it in the end and after a couple of tries, this rice cooking technique will become a fundamental and accessible aspect of your cooking arsenal! 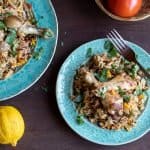 This rice can easily be made vegetarian by leaving out the chicken portion of the recipe, substituting it for mushrooms, or using a meat free alternative!

STEP ONE – PREPARE THE VEGETABLES 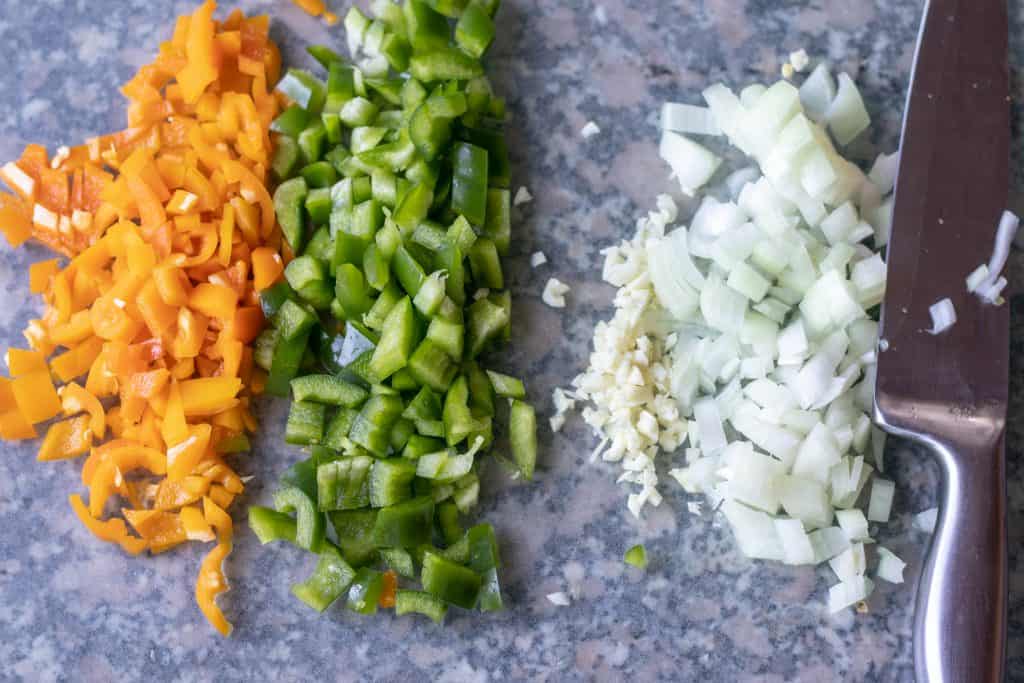 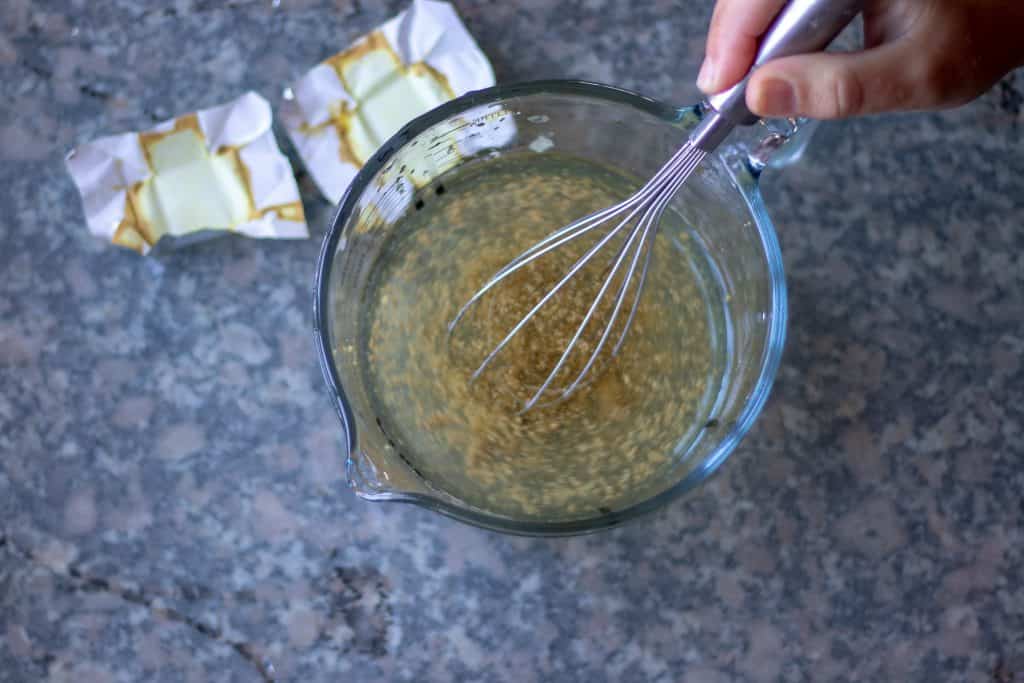 Unwrap the cubes and break them up a little before placing them in measuring cup or bowl. Fill it with the hot water and whisk the bouillon cubes with it. Allow them to dissolve and set aside. 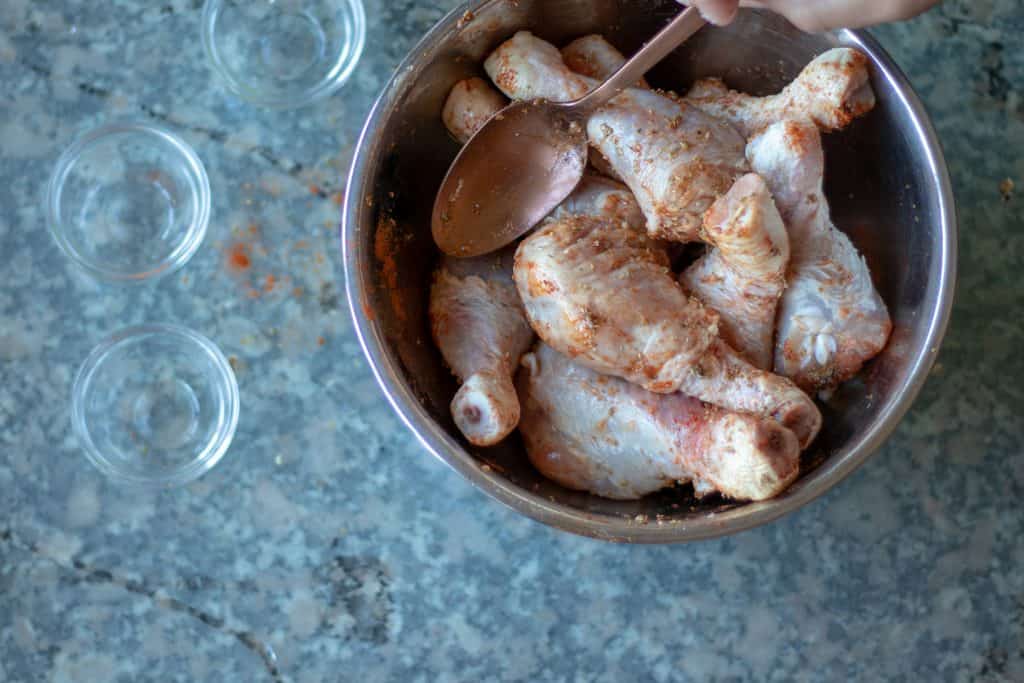 Put the chicken drumsticks into a bowl. Drizzle half of the olive oil over the drumsticks and sprinkle the oregano, paprika, cumin, and salt over them. 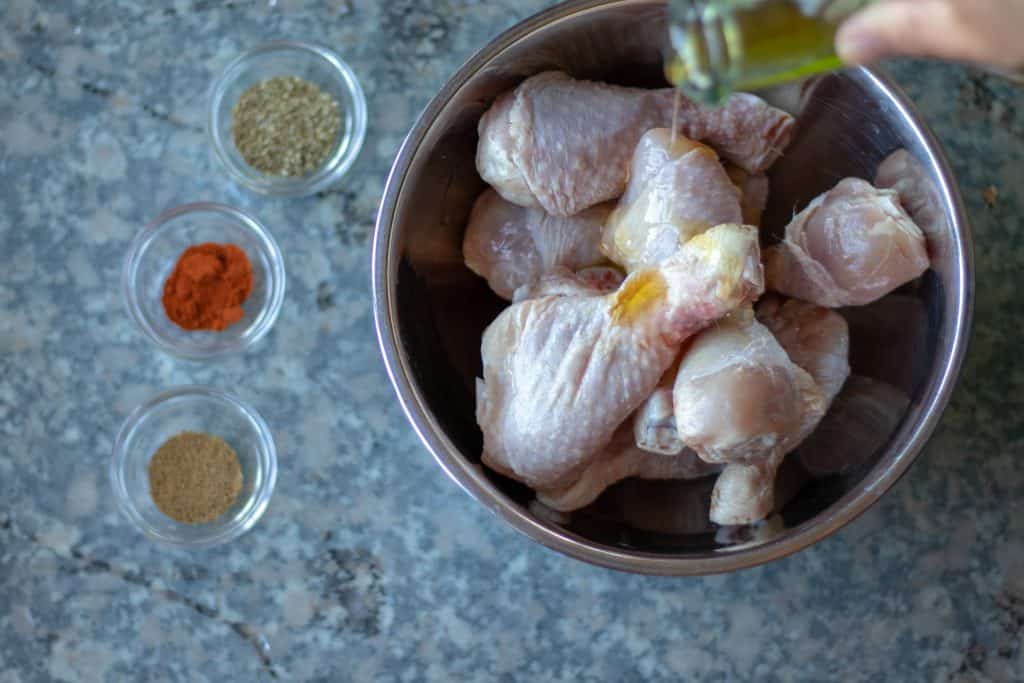 Mix the chicken into the oil and seasoning by moving them around in the seasoning to coat them on all sides. 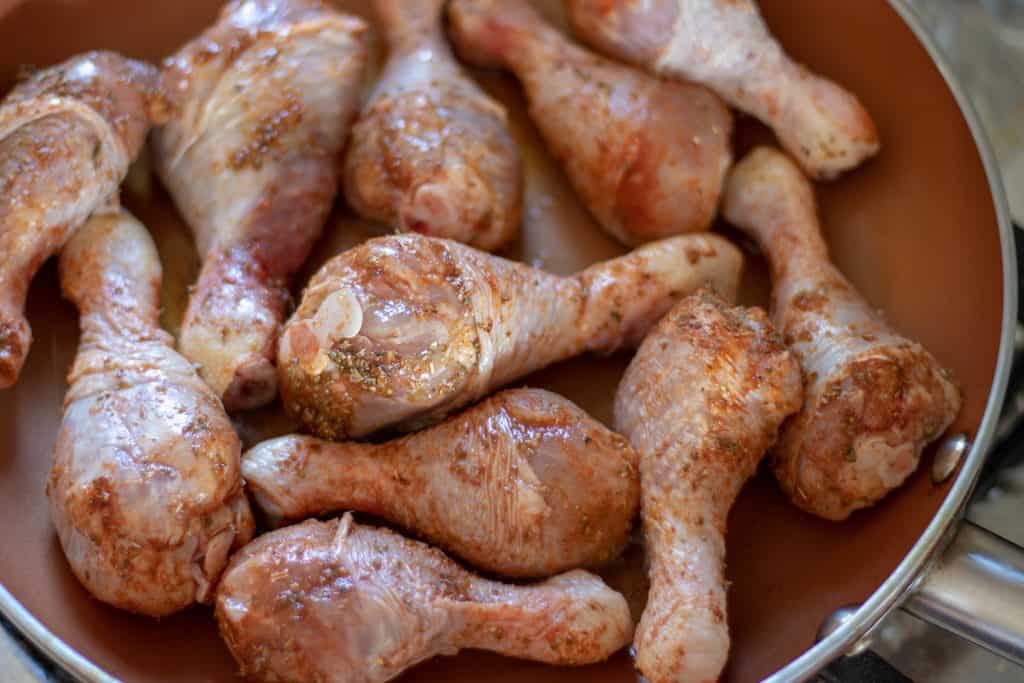 Pour the other half of the oil used for the chicken in a large saute pan or skillet. Heat the oil on the stove over high heat. Lay the drumsticks in the pan and allow them to brown lightly on the outside, turning them about every 3 minutes or so. 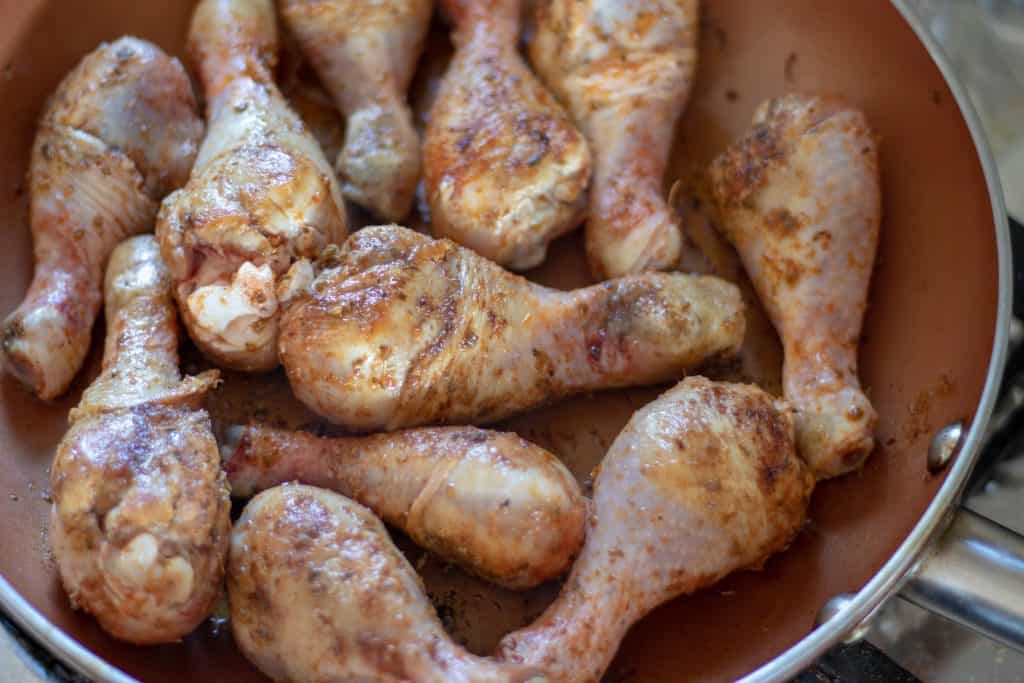 Turn off the heat. 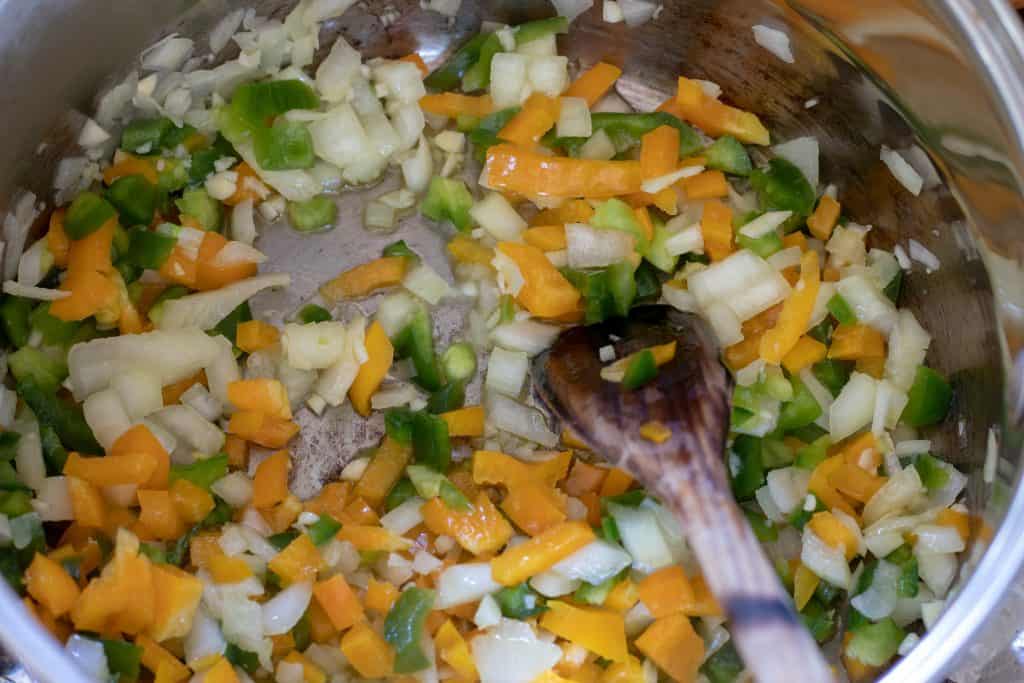 Pour just enough olive oil into a pot to cover the bottom and heat it on the stove over medium-high heat. After the oil has warmed, add the onion and garlic to the pan and allow it to cook about 2 minutes, stirring frequently so it doesn’t burn. 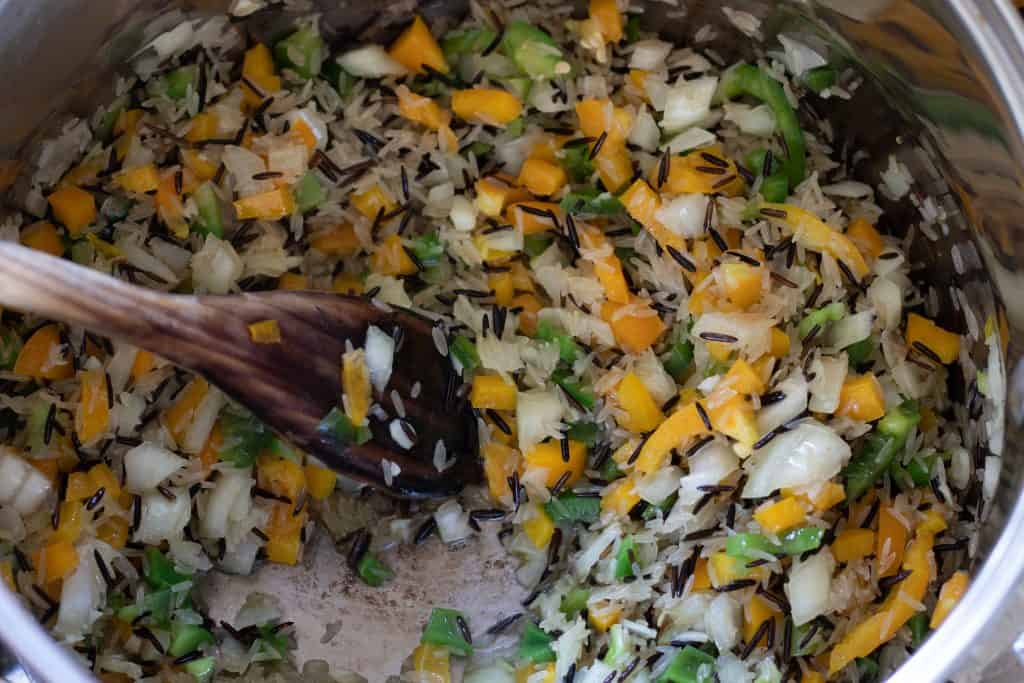 Next, add in the bell peppers, stir, and cook another 3-4 minutes. 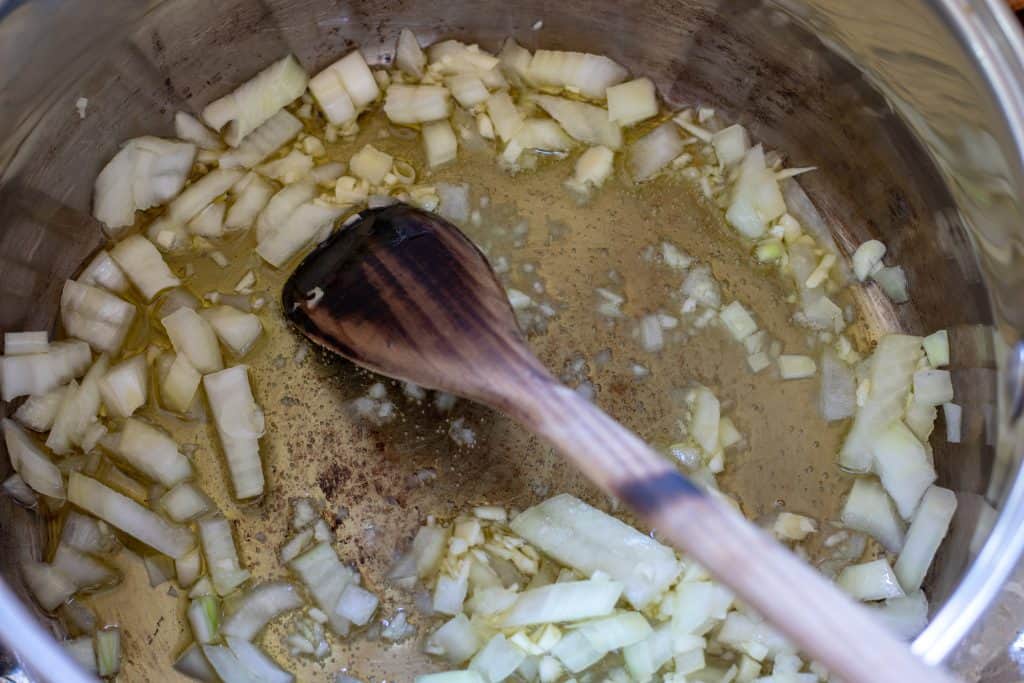 Add the wild rice to the pan and stir it in with everything and to coat it in the oil. Cook the rice, stirring so it does not burn, for about 5-6 minutes.

The rice should toast a bit, and start to smell slightly nutty. Last, stir in the diced tomatoes. 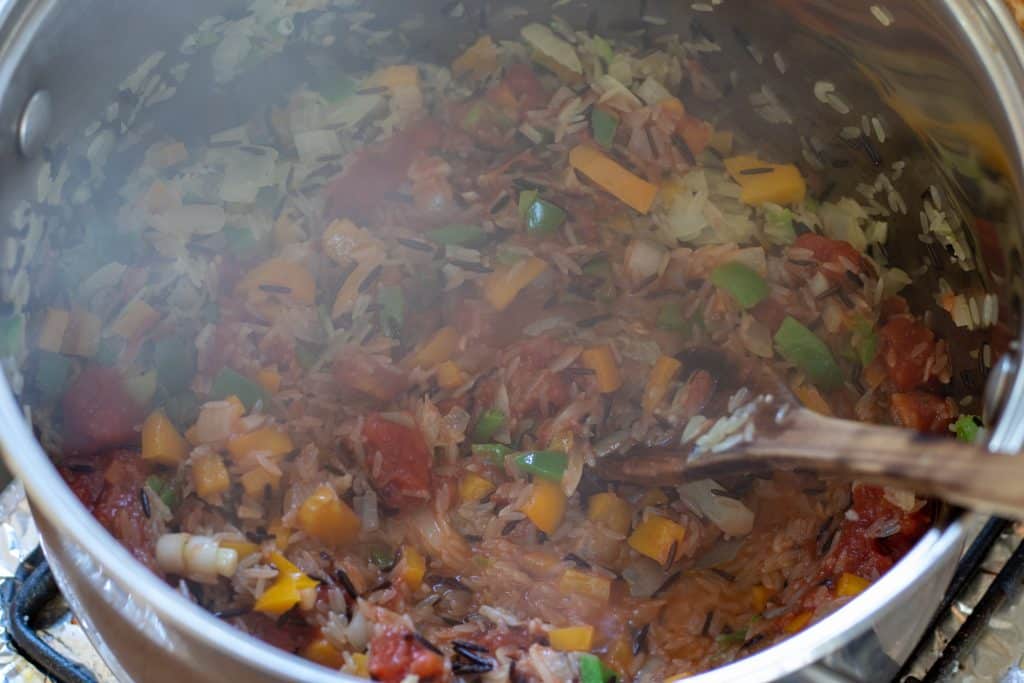 Using tongs, move the chicken drumsticks to the rice pot. 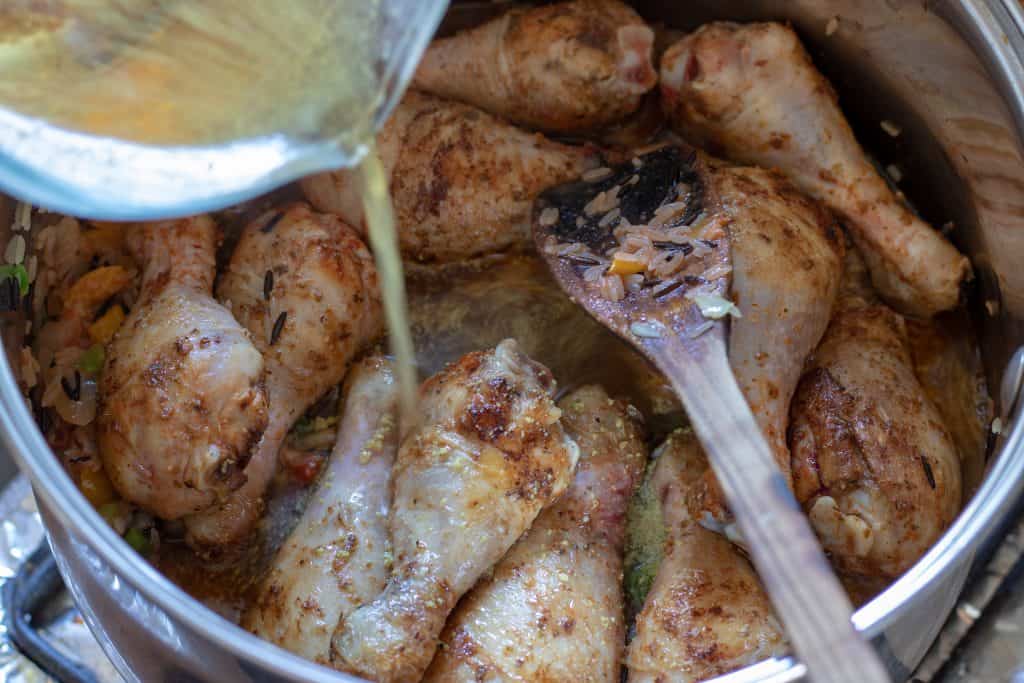 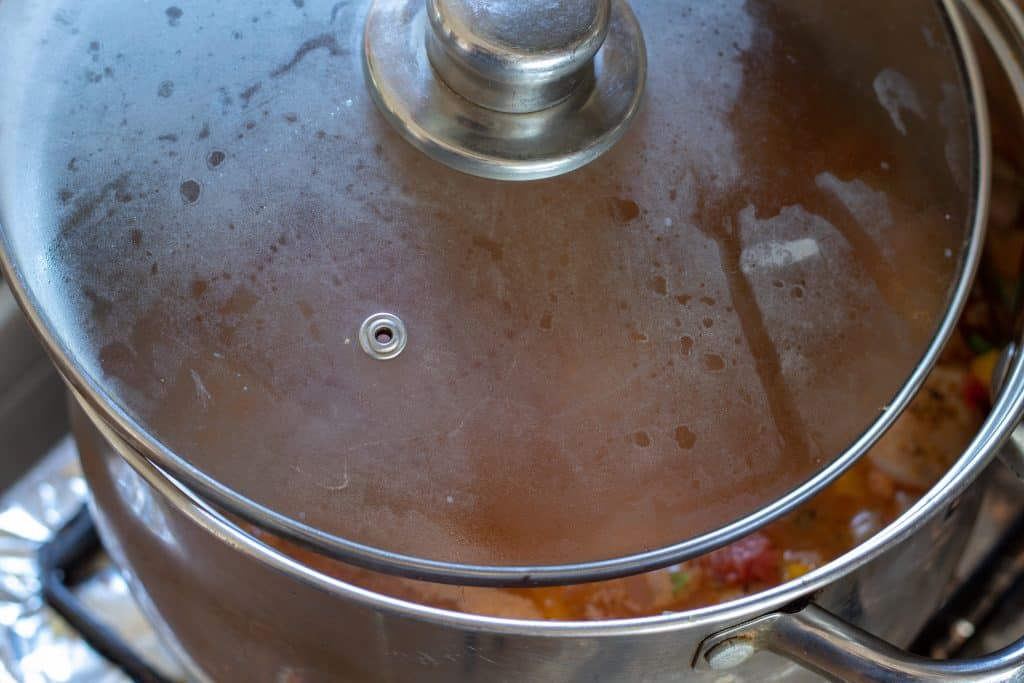 Put the lid onto the pan with it slightly off to allow steam to escape as it comes to a boil. 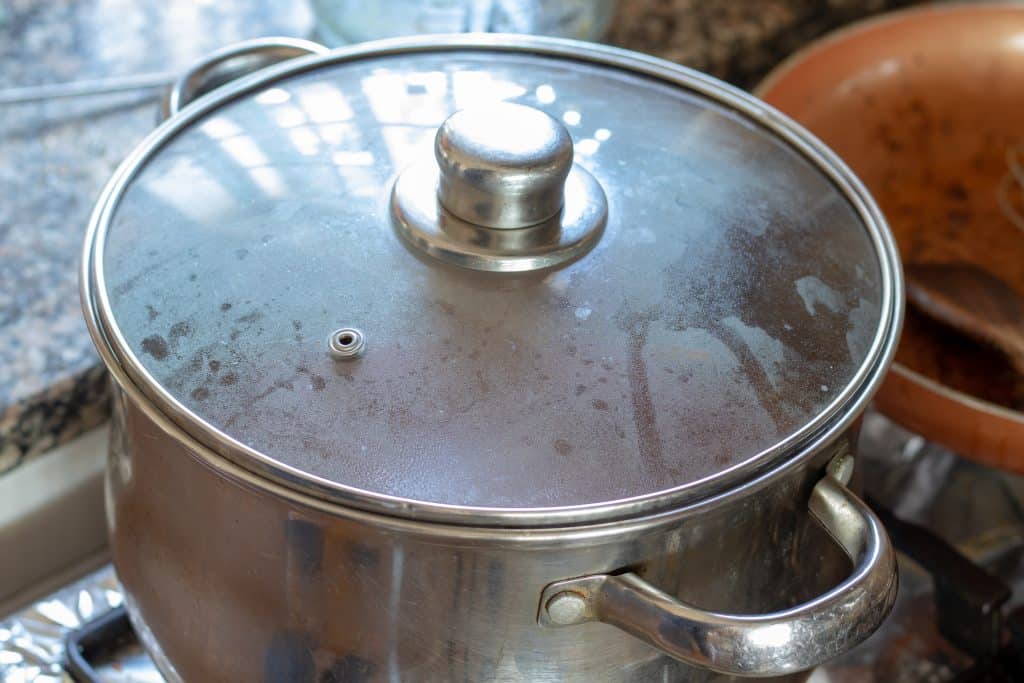 After the rice has started to boil, reduce the heat on the stove to low and move the lid so it fits tightly to the pan. Let the rice cook about 20-25 minutes. It will be done when the chicken is cooked through, the rice is tender, and the liquid has all been absorbed. 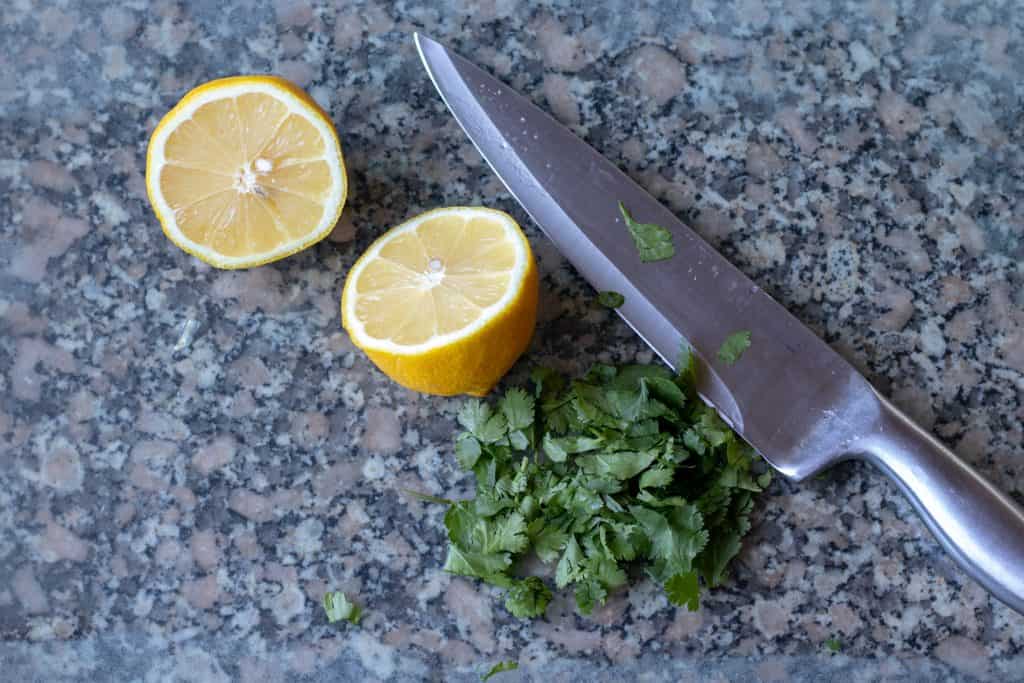 While the rice cooks, roughly chop the cilantro, removing any extra long stems. Cut the lemon in half and try to remove any easy to see seeds.

Turn off the rice and open the lid. 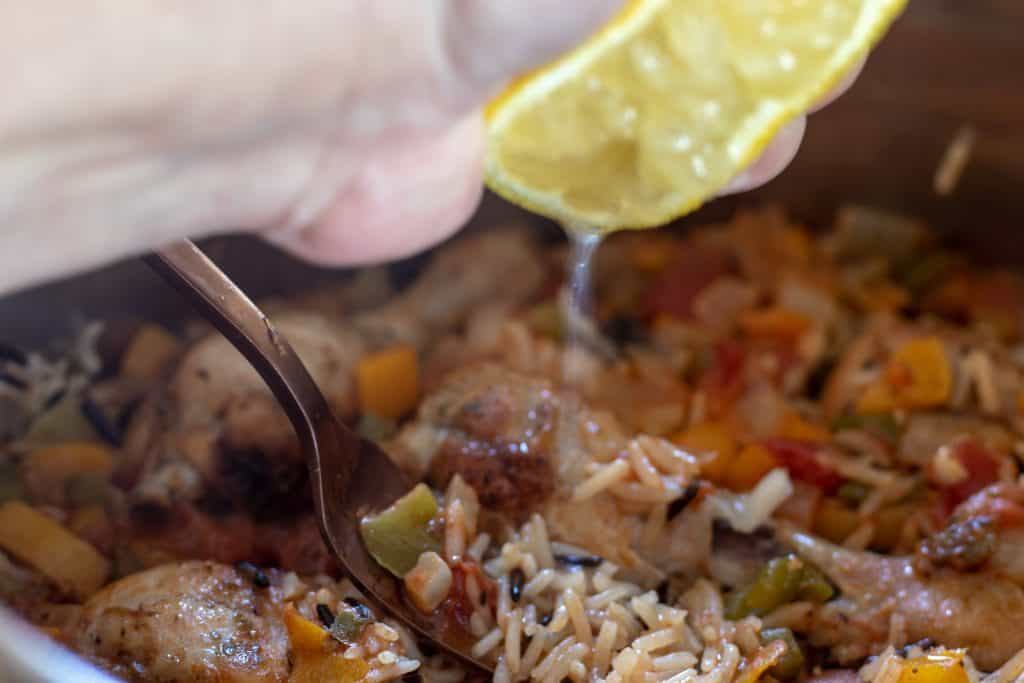 Squeeze the lemon juice over the rice and chicken and fluff it with a fork a bit to help the lemon season everything. 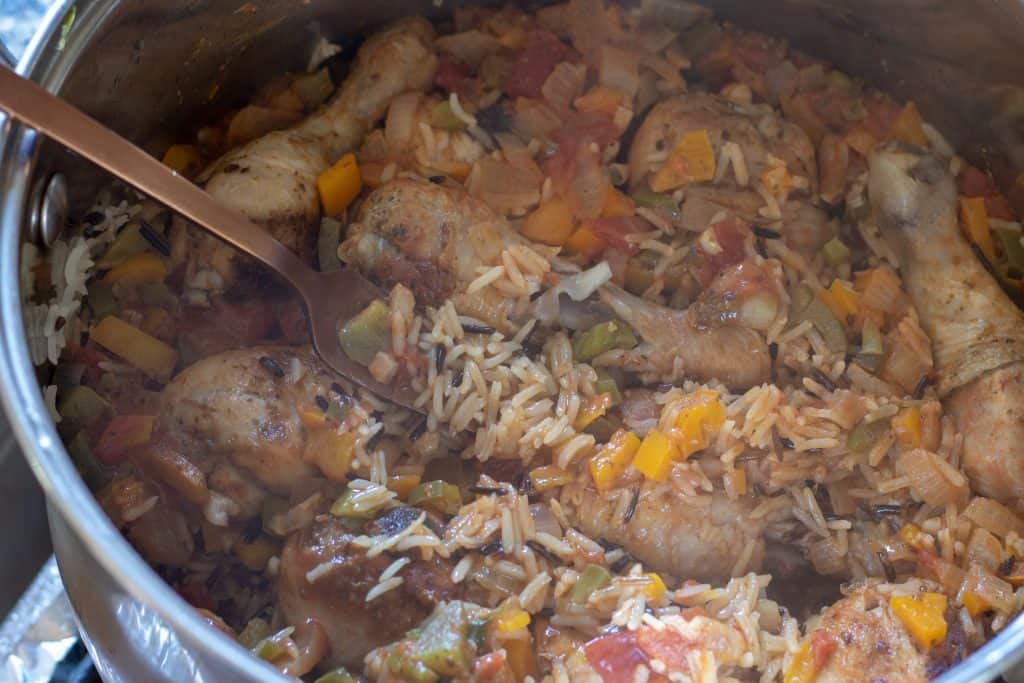 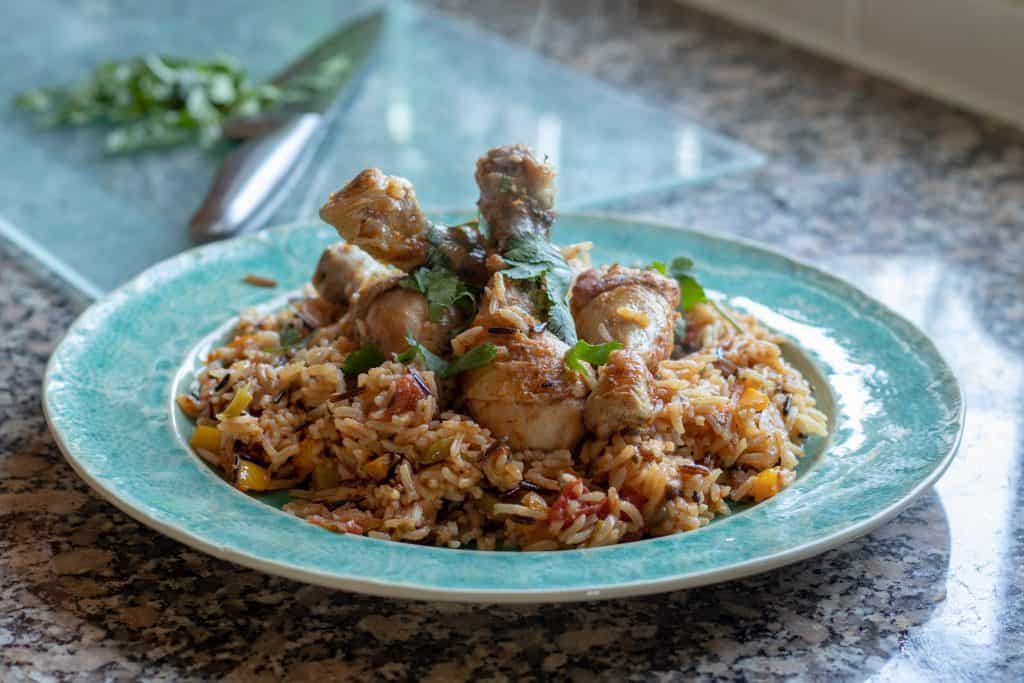 Spoon the finished wild rice and a couple of drumsticks onto plate and sprinkle each with a bit of the fresh cilantro and serve. 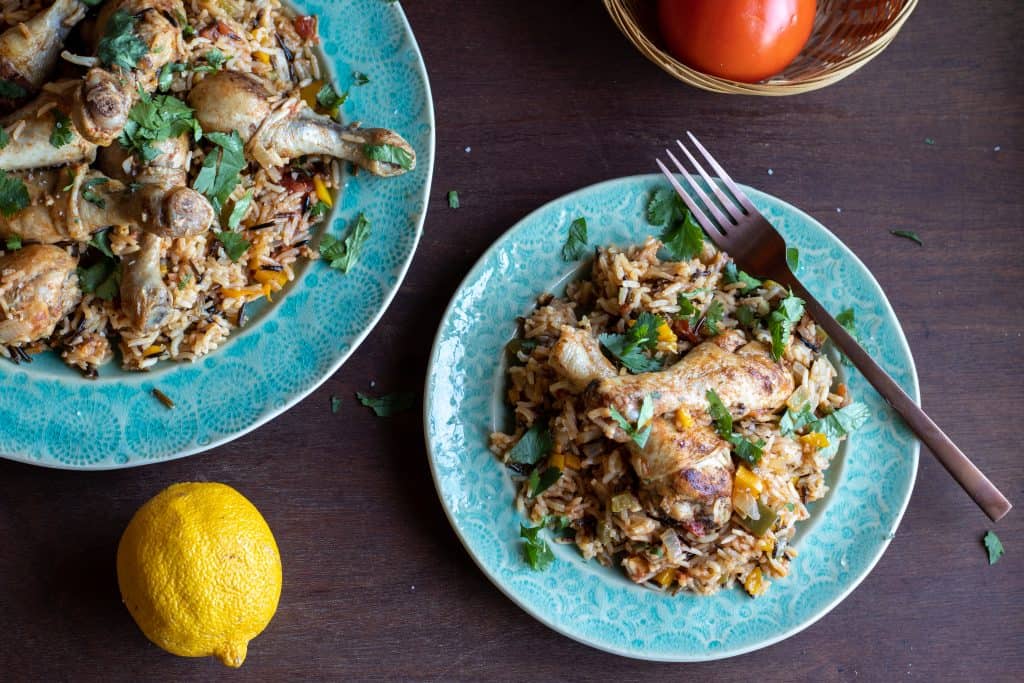 Mexican rice, especially this delicious wild rice version, doesn’t have to be exclusive to restaurant fare . And with the addition of spiced chicken, it can become so much more than just a side dish!

Do you prefer Mexican rice dry like this? Or is a wet, more risotto-like rice more appealing for your dinner table? We’d love to know!