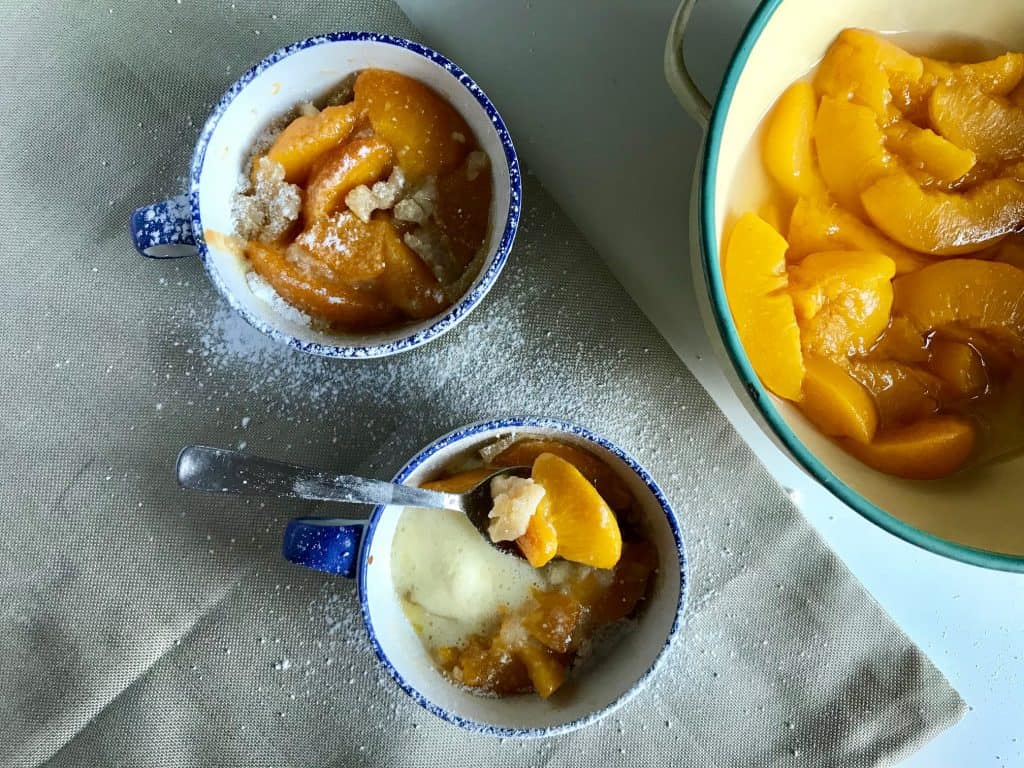 Sometimes, you want the comfort and familiarity of a rustic dessert but without the boring “plopped-onto-your-plate” presentation.

And sometimes, you want to indulge in a dessert that doesn’t require hours upon hours of preparation and a trip to the grocery store.

I can relate. That’s why this recipe for peach cobbler is the easiest thing you can whip up within minutes while still managing to look dainty! It’s chock-full of peaches (more than batter!) and has a soft, cakey texture. Which brings us to another point – Do you like your cobbler to be cakey, crispy or crumbly? If you’re unfamiliar with what I mean, you’re one Google search away from diving headfirst into the world of peach cobbler controversy.

From using complicated pie crust dough, to slabs of biscuit dough, to even using the “dump cake” method where you scatter box cake mix atop the fruits then pour melted butter, methods of making peach cobbler are in abundance. This recipe uses the traditional method of pouring runny batter over melted butter, without stirring. Read on to find out! 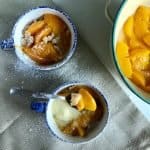 STEP ONE – PREPARE YOUR INGREDIENTS 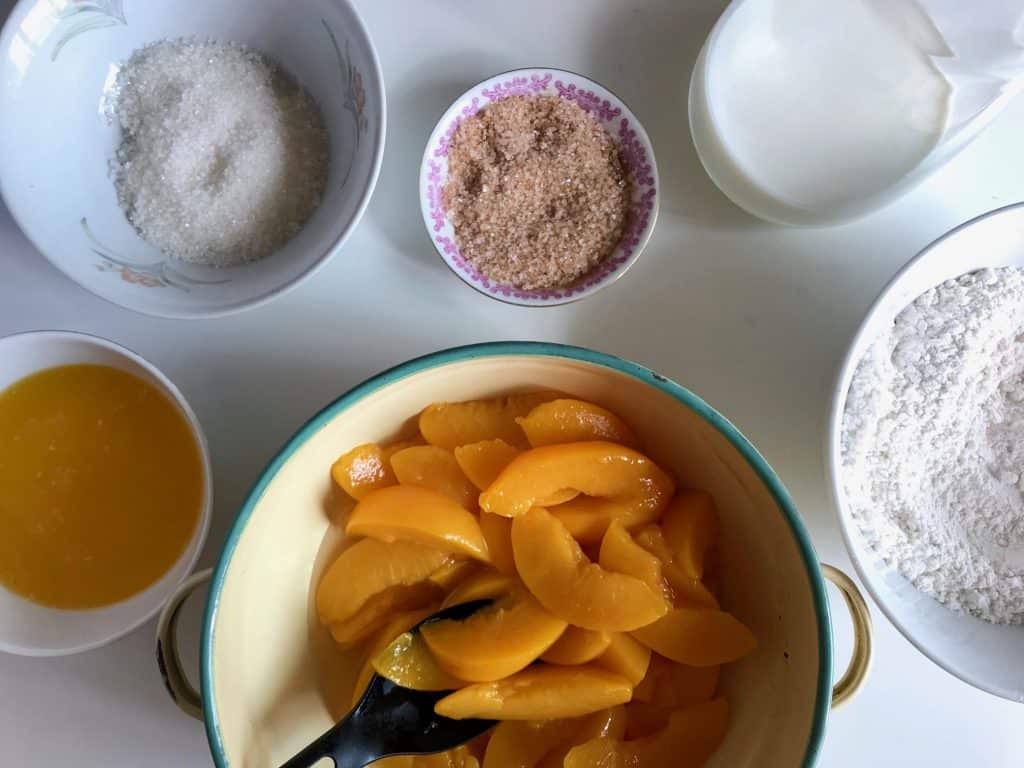 As with all recipes, prepare your ingredients beforehand. That means measuring out the dry ingredients, melting the butter and opening the cans of peaches. This recipe uses canned peaches, which you can keep in the pantry for extended periods of time. (Read: Peach cobbler anytime!) 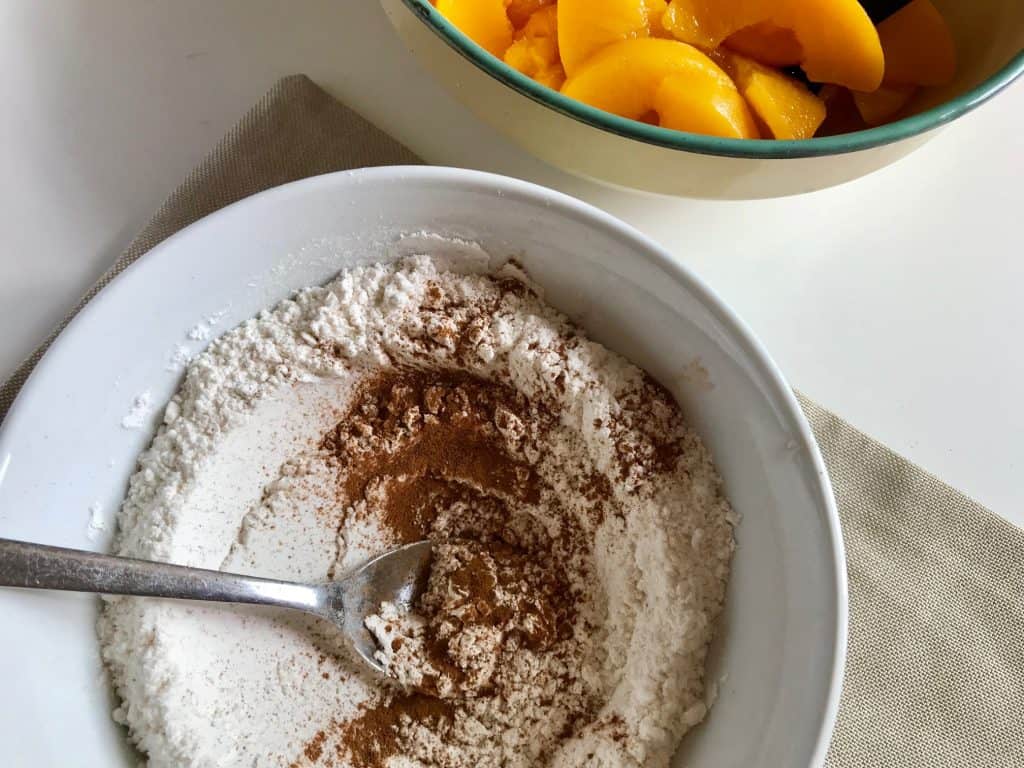 Combine the flour, cinnamon, sugar and salt in a large bowl. While sugar is typically considered a wet ingredient, you can just chuck it in with the dry for this recipe.

STEP THREE – POUR IN THE MILK 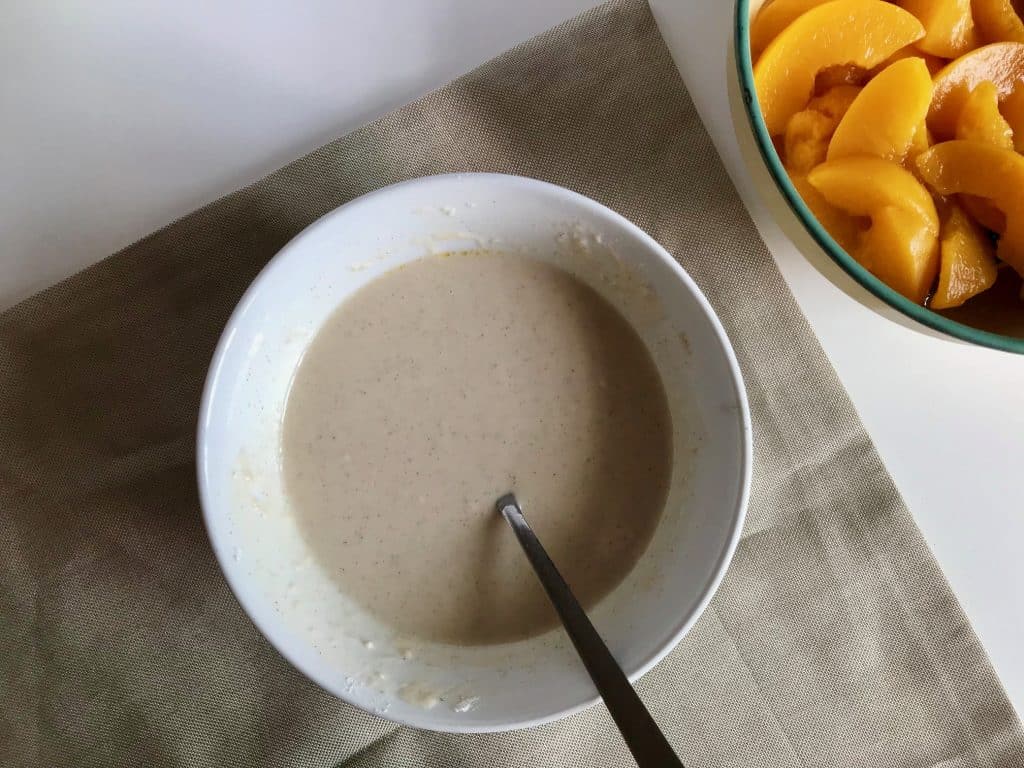 Make a well in the centre and pour in the milk, combine until homogeneous and that’s your batter done! Set aside as you prepare the teacups. 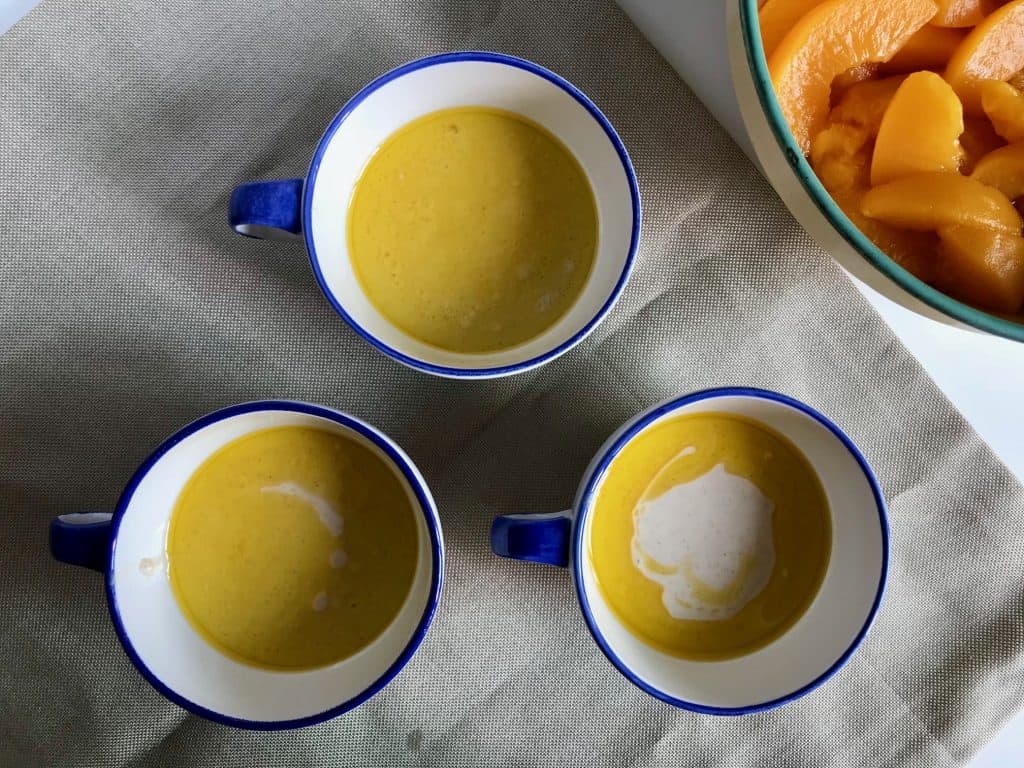 Use large oven-safe ceramic teacups for this. If you have souffle ramekins or muffin moulds, that’d be great as well, though you might have to alter the baking time and amount of butter according to the size of the moulds.

Pour ¾ tbsp of melted butter into each teacup. Swirl the butter around the edges of the teacup to grease it. Pour in ¼ cup of batter or until ¾ full. Do not stir! 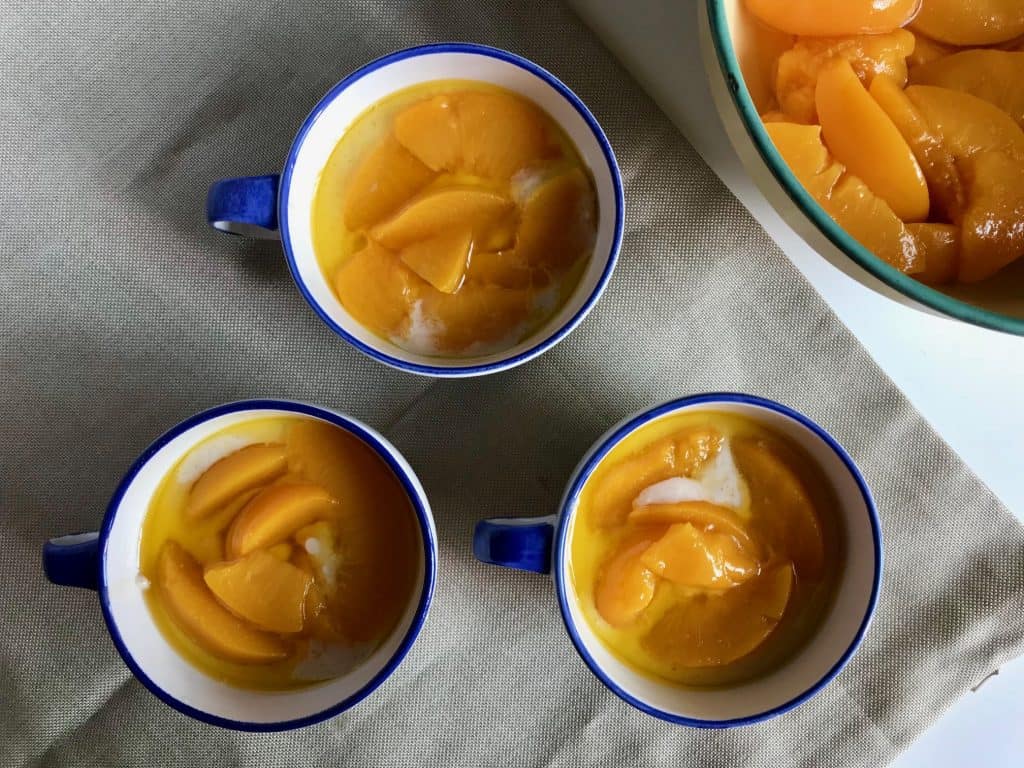 Now go ham on the peaches! Place 4-5 slices of peaches into each teacup (again, depending on the size of your mould) but make sure not to add any of the syrup in. Another benefit of using canned peaches is that they’re already full of moisture and sweet enough, whereas if you were to use fresh peaches, you’d have to first go through an entire process of blanching to peeling to simmering with sugar. 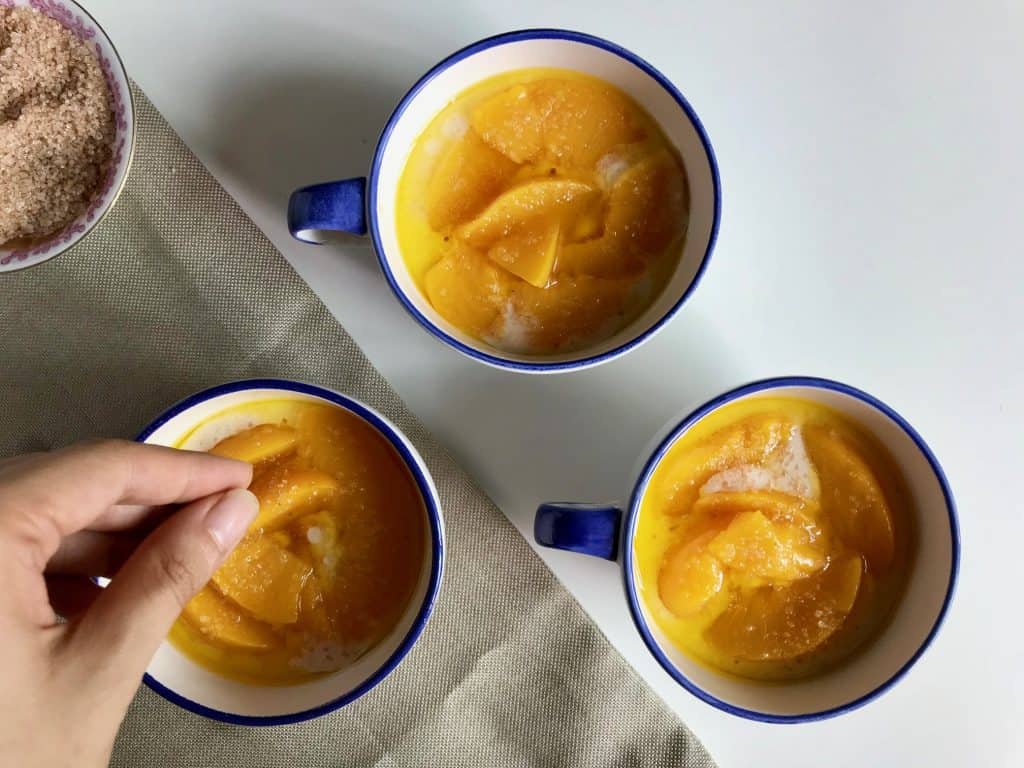 This step is optional. Combine a few tablespoons of white granulated sugar with cinnamon powder and lightly sprinkle over the top just before baking. The sugar melts beautifully to form a faint, aromatic crust. 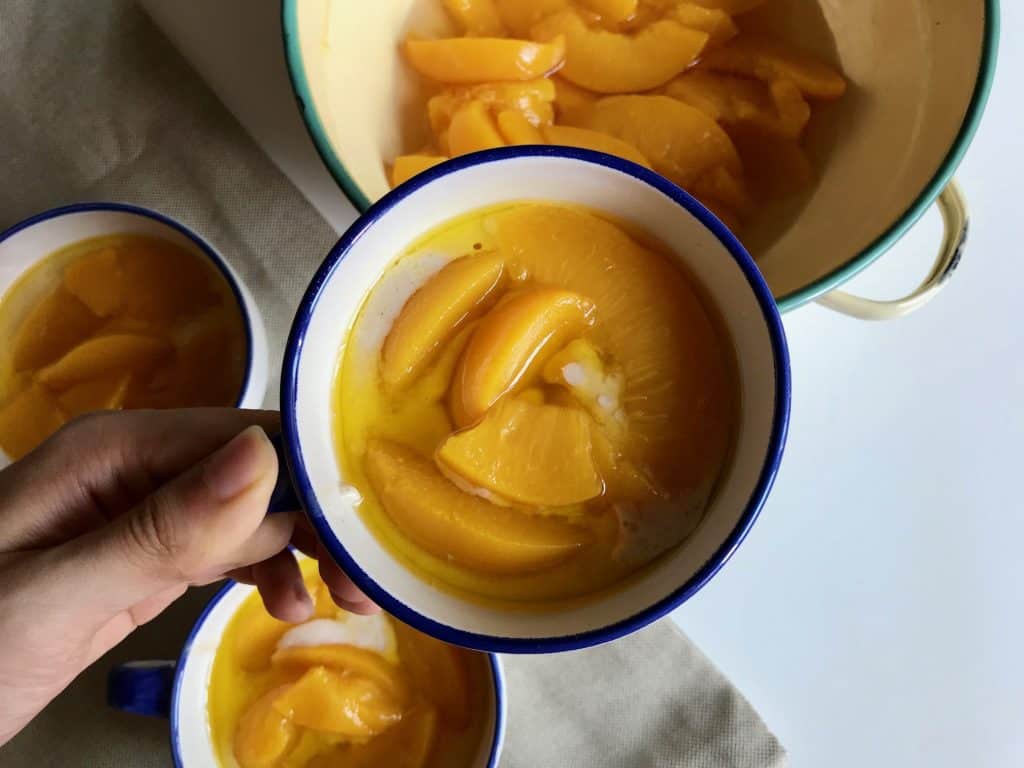 Preheat your oven to 180 degrees celsius and bake for 20 minutes or until the batter rises slightly. Best part about this recipe is you can make it even in a small toaster oven!

From here, you can serve it however you’d like. Plain, with a dusting of icing sugar, homemade peach purée or caramelised peaches, or perhaps a scoop of ice cream? (In quenelle form if you’re feeling fancy!)

Do note that this isn’t the crispy sort of cobbler. Rather, the cakey kind! If using fresh peaches or fresh fruit in general, peel the skins and combine with sugar, lemon juice, and a little cornstarch if necessary. Then let it macerate and release some of the juices for at least 30 minutes before using in the actual recipe.

Canned fruits get a bad rep sometimes. But we love it for its all around easy accessibility at anytime of the year, anywhere across the globe. (And anytime the cravings call!)

For more desserts like this, check out our decadent strawberry funnel cake, vegan red velvet cake and cranberry pound cake with orange glaze!