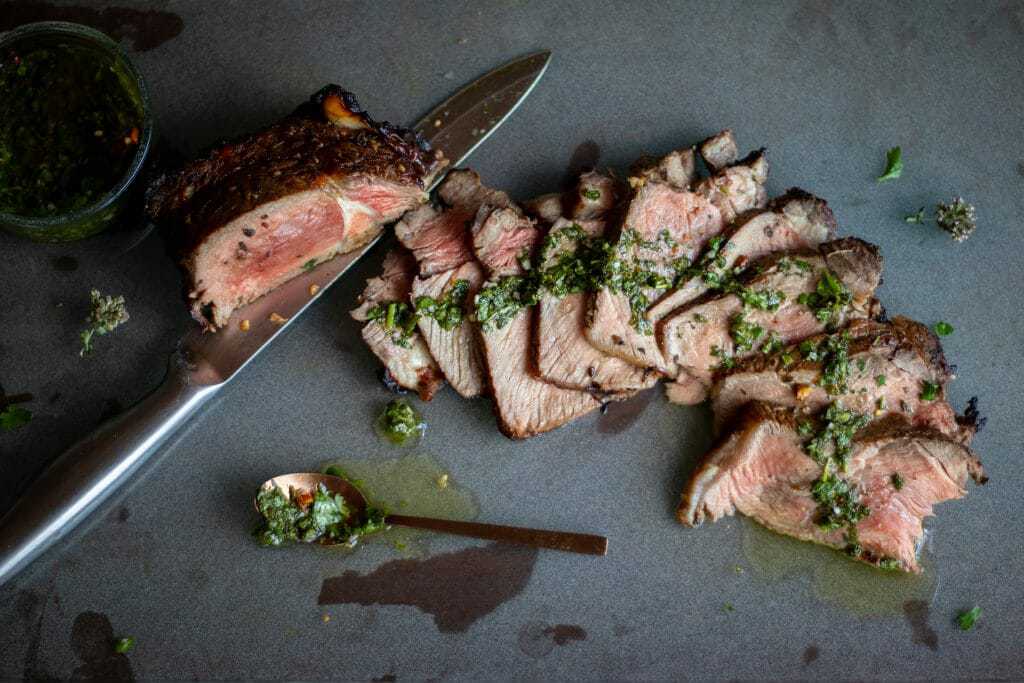 Contrary to popular belief, London broil is not a particular cut of meat, but a cooking method. It doesn’t require a certain roast, or steak from a specific area even if you may come across such a statement on prepackaged beef in the grocery store. Though, to be fair, a London broil does do beautiful things when coupled with a lean, tough meat. It will turn that tight sinew into a delicate, flavorful, bite every time as long as steps are followed!

First step pertains to the cut. Choose one that will soak up a marinade well like a flank, skirt, sirloin tip, or top round. A steak that is lean is ideal because the marinade will soak into, infuse, and ultimately help to tenderize a usually more tough and inexpensive bit of meat without having to do a low and slow roasting or stewing. It means you can have the caramelized crispy bits on the outside as well as intense flavor and tenderness inside.

Next is the marinade. A good marinade does two things; tenderizes and provides flavor. In the marinade provided here uses acid from balsamic vinegar and Worcestershire sauce to help break down those lean fibers, and a bit of heat from chili pepper flakes, a hint of honey, and plenty of herbs and garlic to saturate the meat with a deep level of flavor. Which is all apart of the biggest step aside from the actual cooking process; time. This absolutely needs to sit for at least an hour, but is always better after a good overnight immersion.

For cooking, there needs to be intense and direct heat from either the top coil in the oven, often referred to as the broiler, or from direct heat from an outside grill. To broil, however, it is usually done exclusively in an oven and is more controlled than on a grill. The meat goes into the oven to char and create browned, crispy bits on the outside while cooking deep down at the same time without over cooking so that it stays tender.

As with any good bit of meat, a lovely sauce is usually present. In this case a quick, fresh, and green chimichurri sauce, tuned just right to compliment this London broil has been provided. 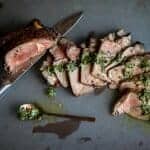 This recipe is best with a cheap, tough piece of beef. Use flank, skirt, or top round steak or look for packaging labeled as “London broil”. This marinade and cooking method also does very nicely with a more expensive cut of steak as well as lean roasts.

STEP ONE – PREPARE THE MARINADE

On a cutting board, peel the garlic, remove the stems from the oregano, mince each and put them in a bowl. 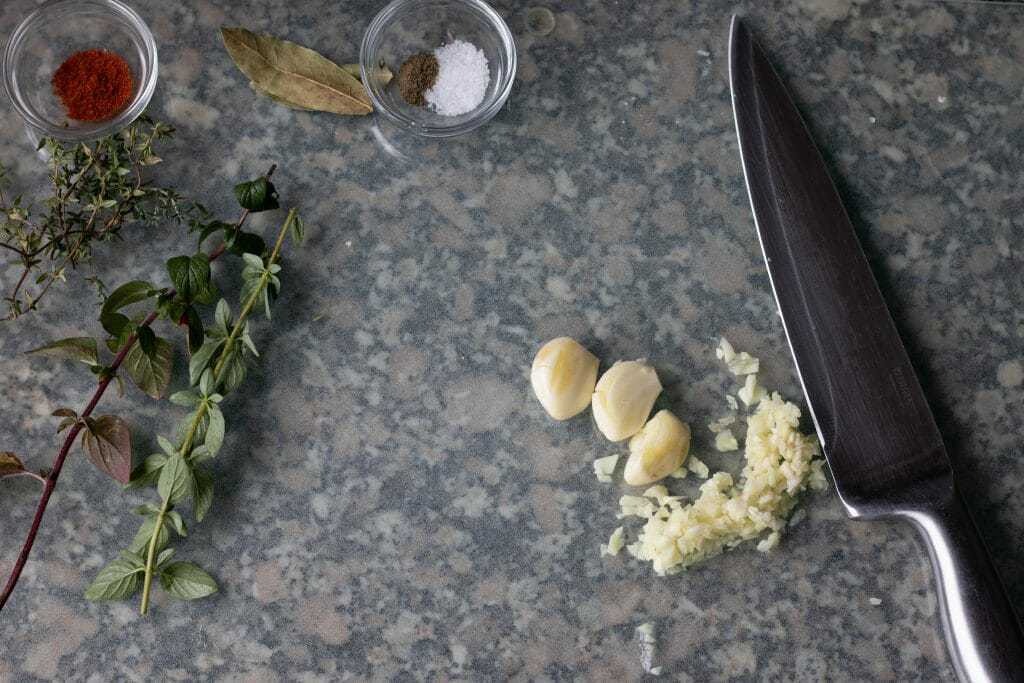 Add the Worcestershire sauce, balsamic, honey, salt, and pepper and whisk well. Taste and add more of the salt and pepper if it needs it. 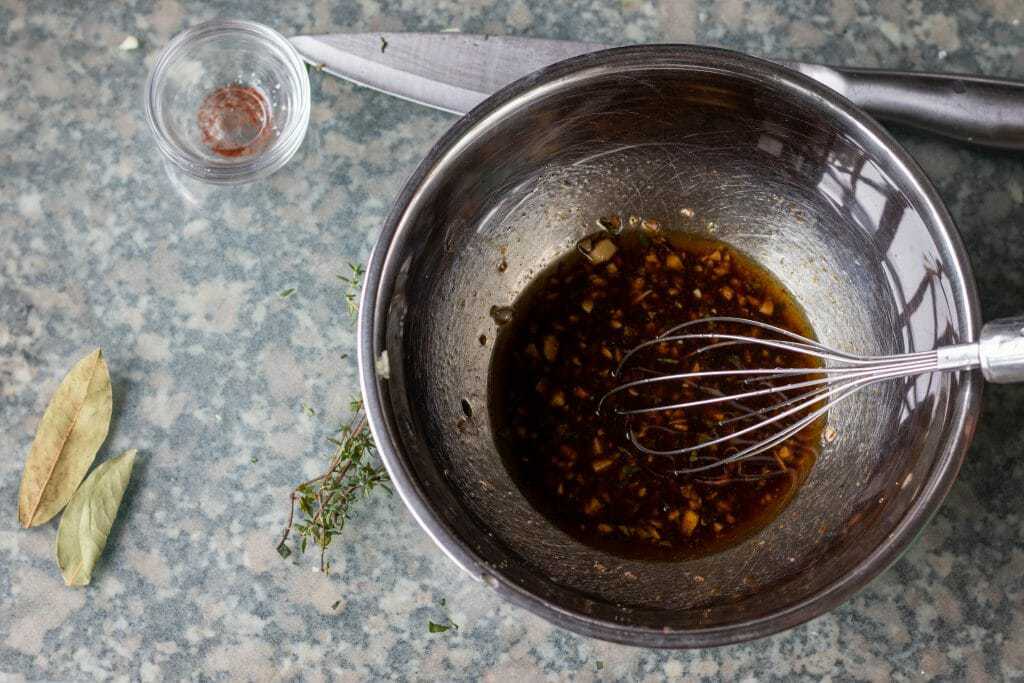 Transfer the beef to a large resealable bag for marinating. Pour the marinade into the bag and add the thyme and bay leaves to the bag. 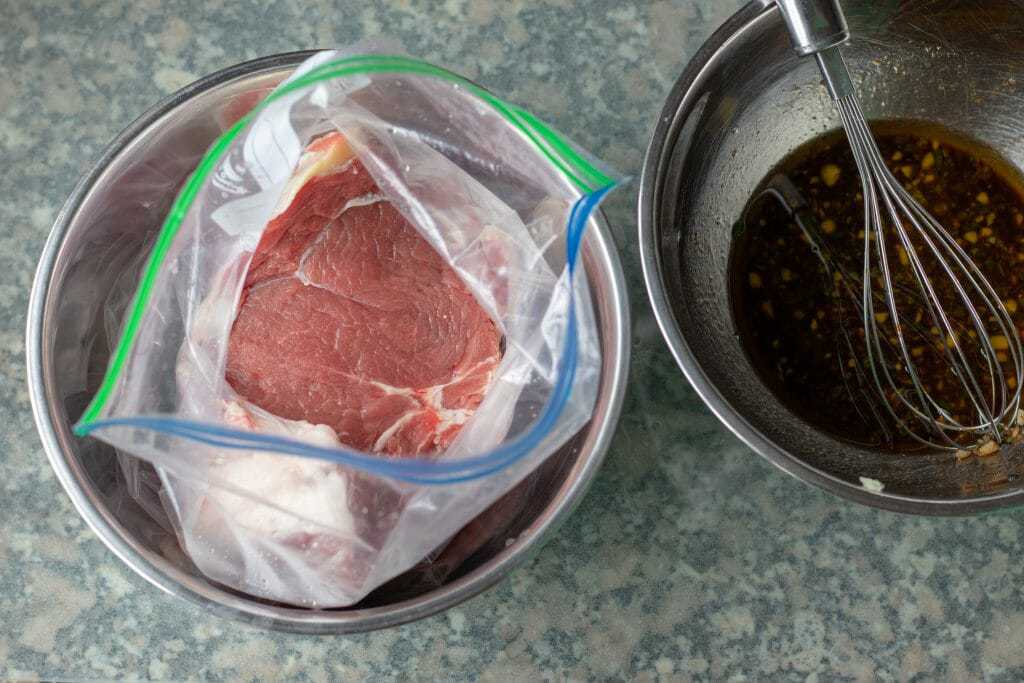 Seal the bag and massage the marinade into the meat before placing it in the refrigerator to soak up the flavorings for, at the very least, 1 hour. Overnight would be better for flavor and tenderizing. 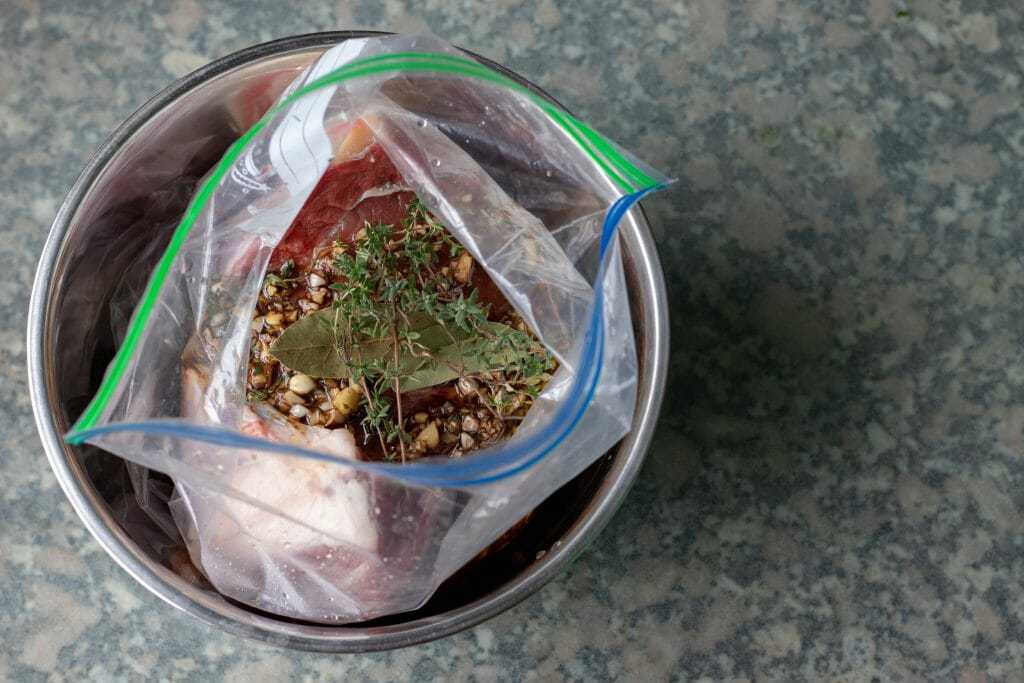 Thirty minutes before wanting to cook the meat, remove it from the refrigerator. 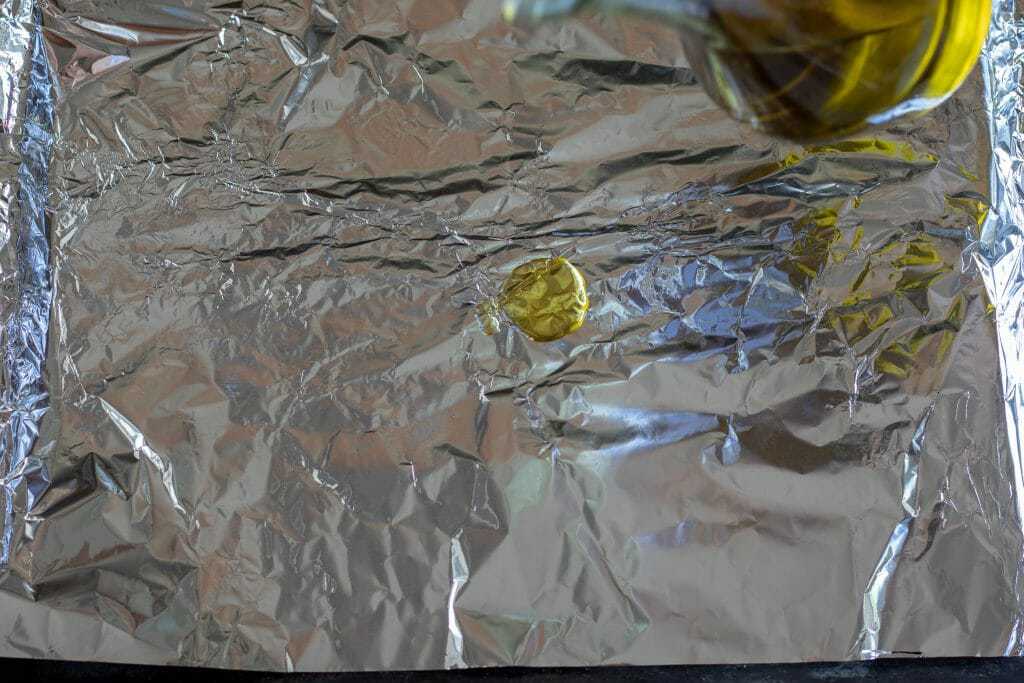 Lay the meat on a lightly oiled aluminum lined cooking sheet or in a dish. 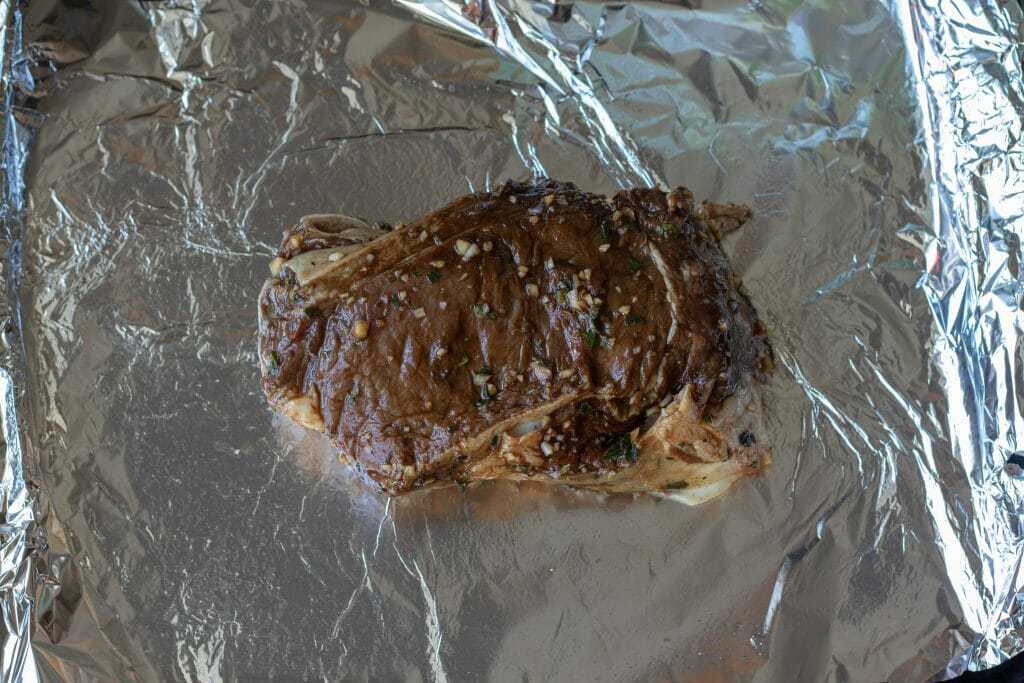 Preheat the oven on broil, which is heating the top coil of the oven to cook with. 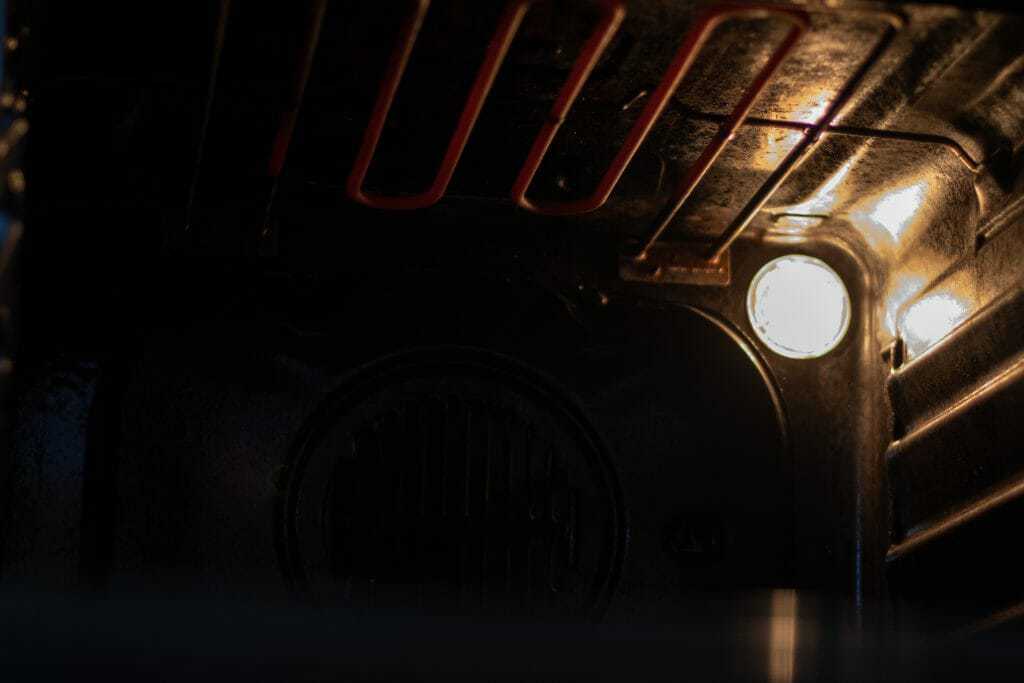 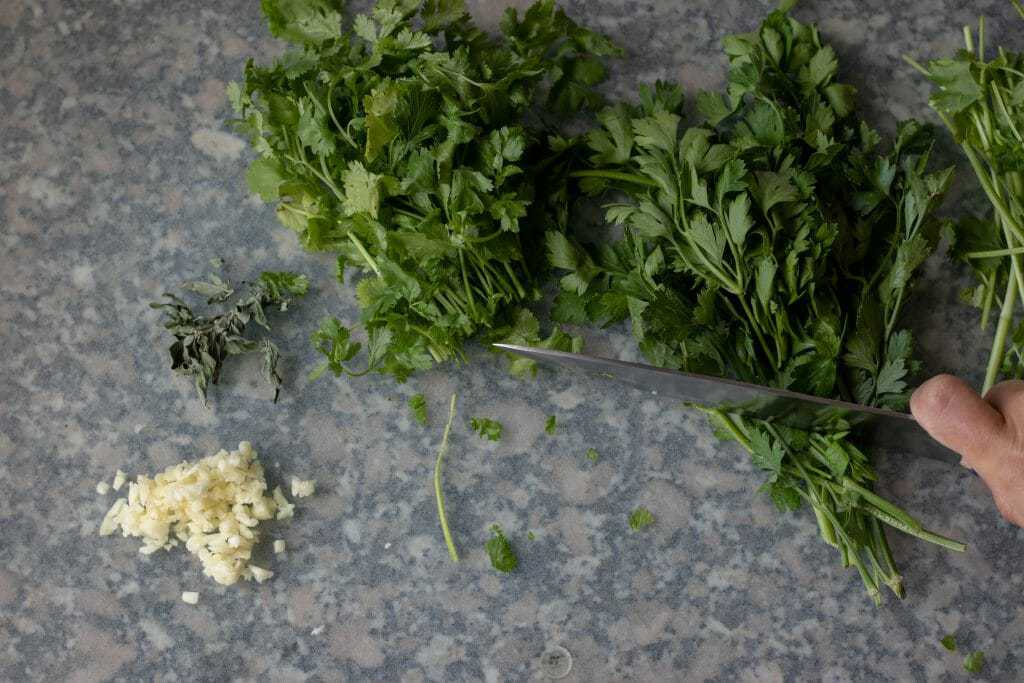 Cut the stems off of the parsley and cilantro before placing them in a pile to mince finely with a chef’s knife or mezzaluna. 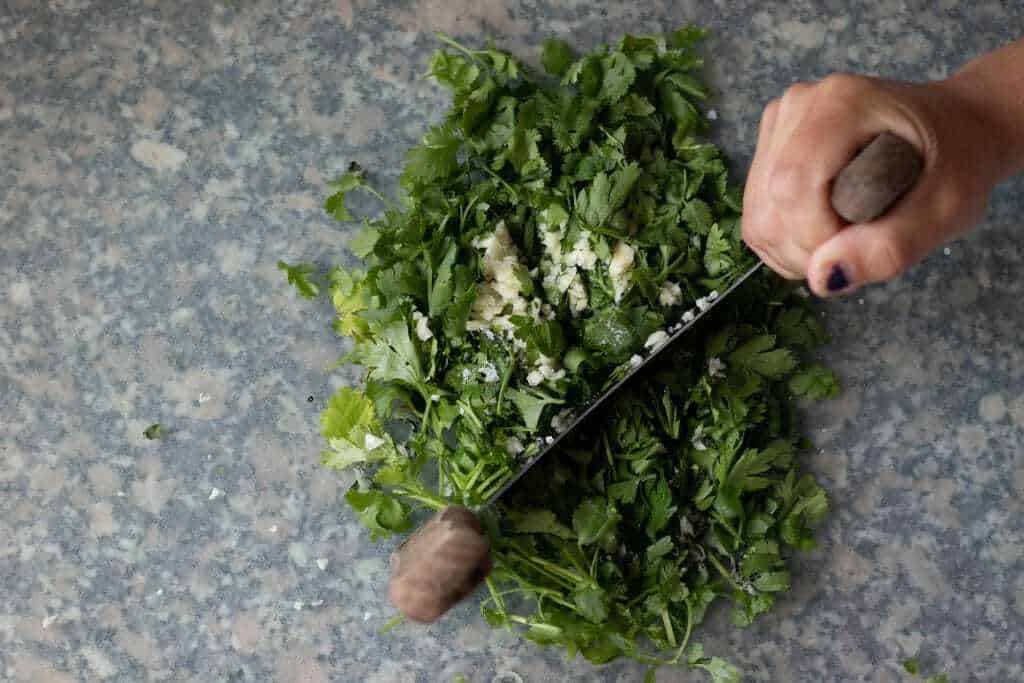 Add garlic, oregano, and chilies to the pile and continue to finely mince everything together. Transfer everything to a bowl. 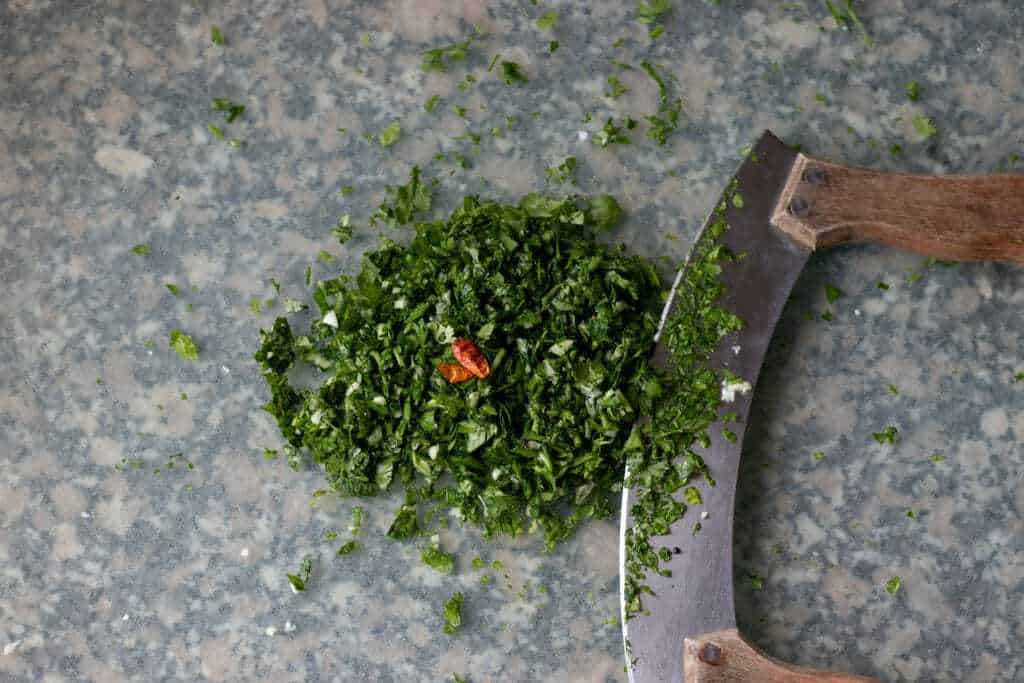 Stir the vinegar and olive oil into the bowl with the herbs. 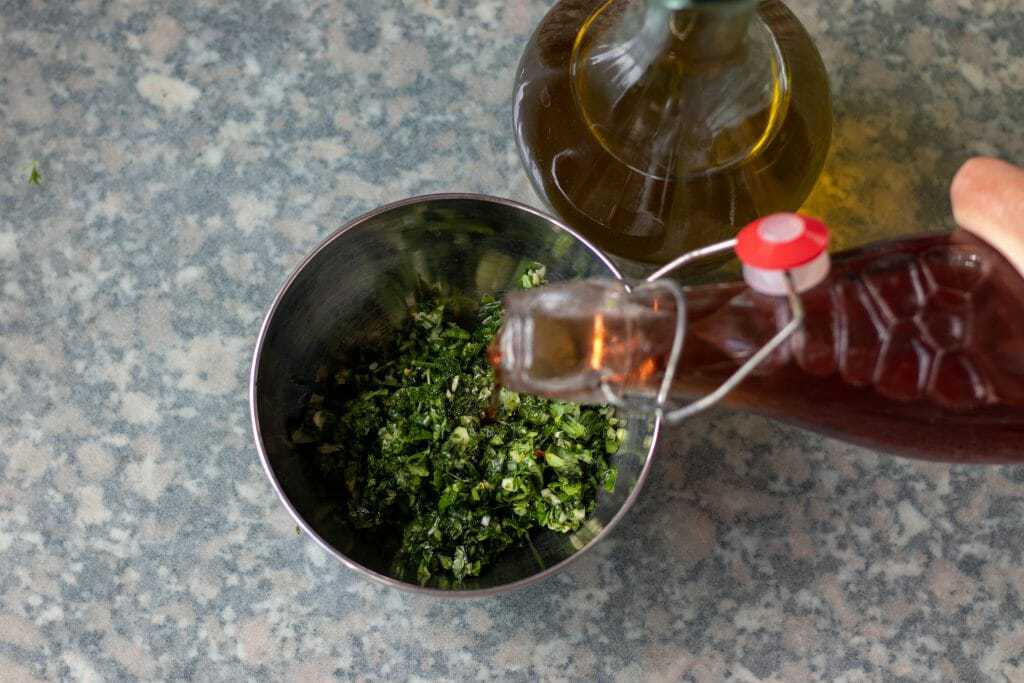 Squeeze the lemon juice, careful to remove any seeds, into the bowl and taste. Season with salt and taste again to make sure it’s seasoned well. Cover and set aside or refrigerate if making ahead of time. 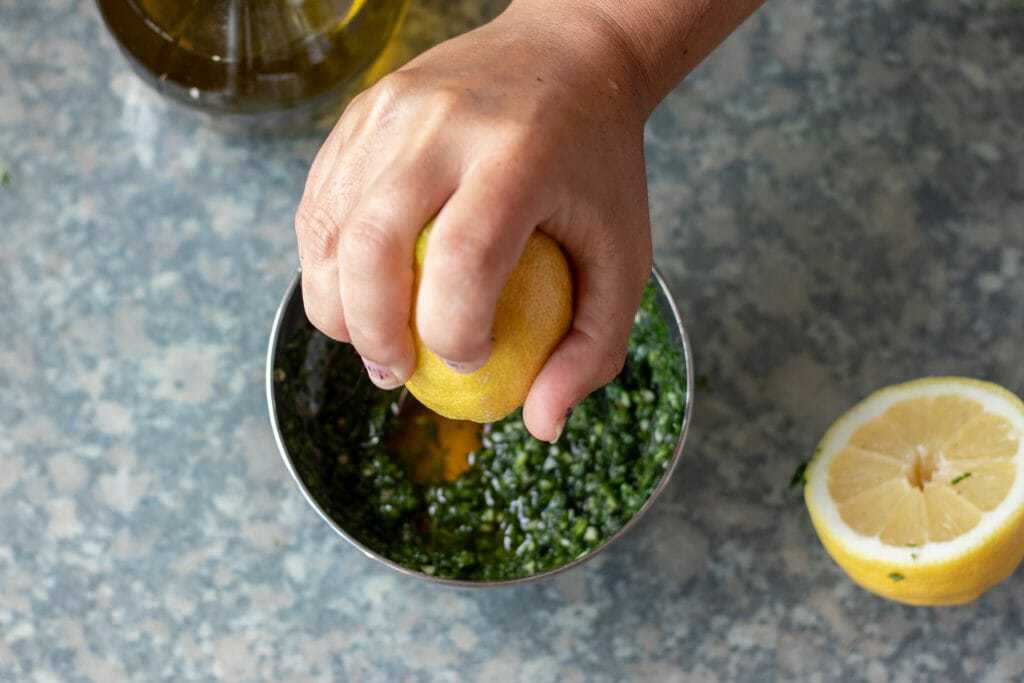 Once the oven has preheated, slide the cooking tray with the beef on it into the oven. 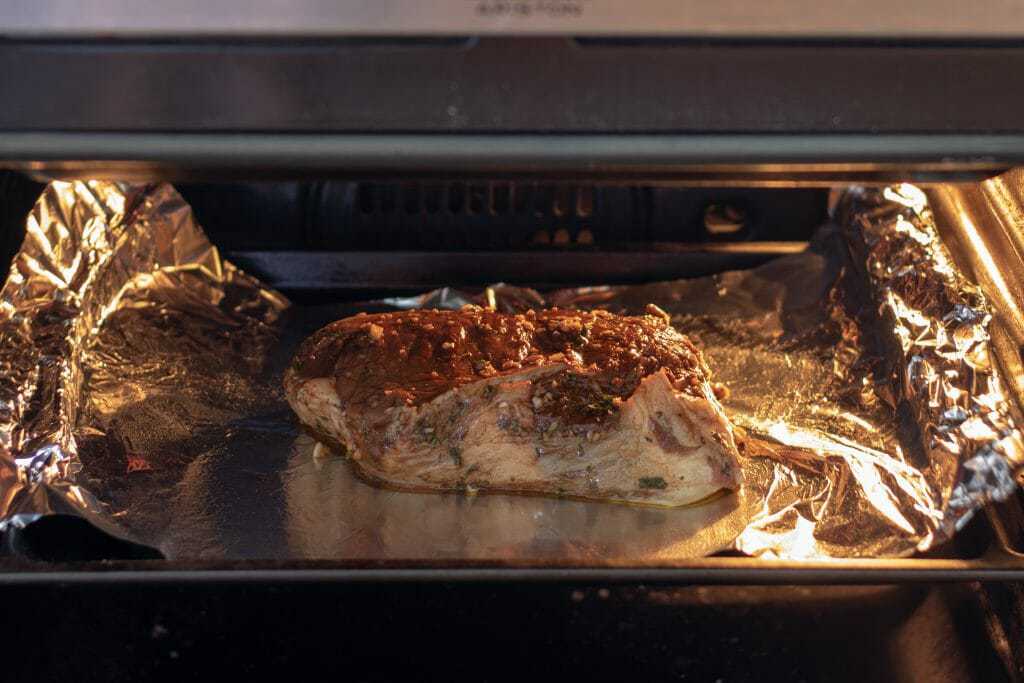 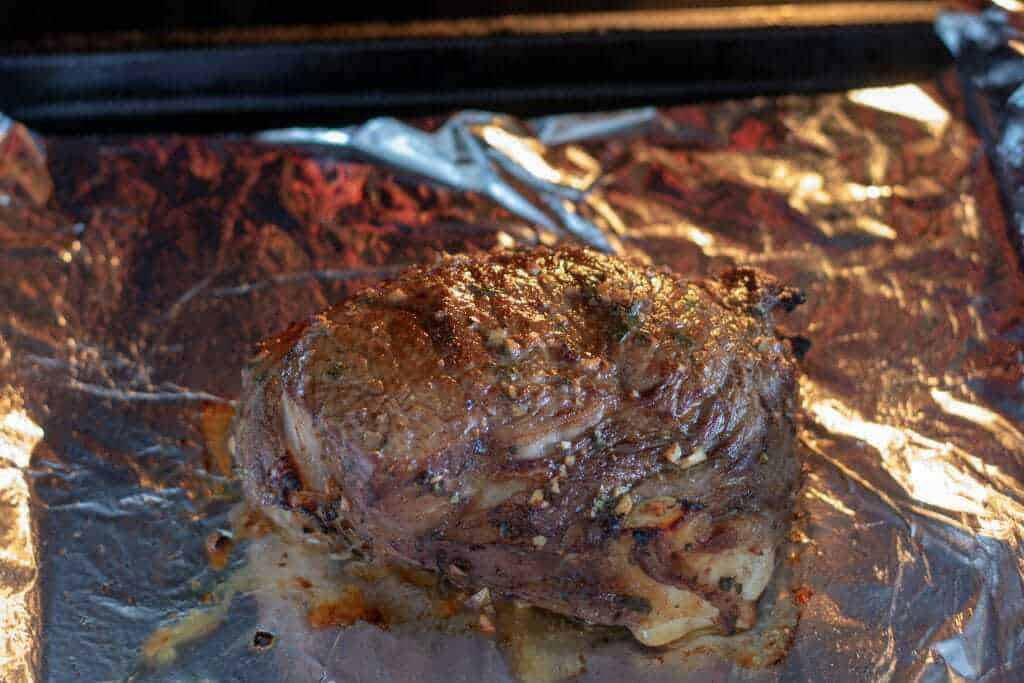 Check the temperature with an instant read thermometer to make sure it reads at 125F for medium rare in the middle. 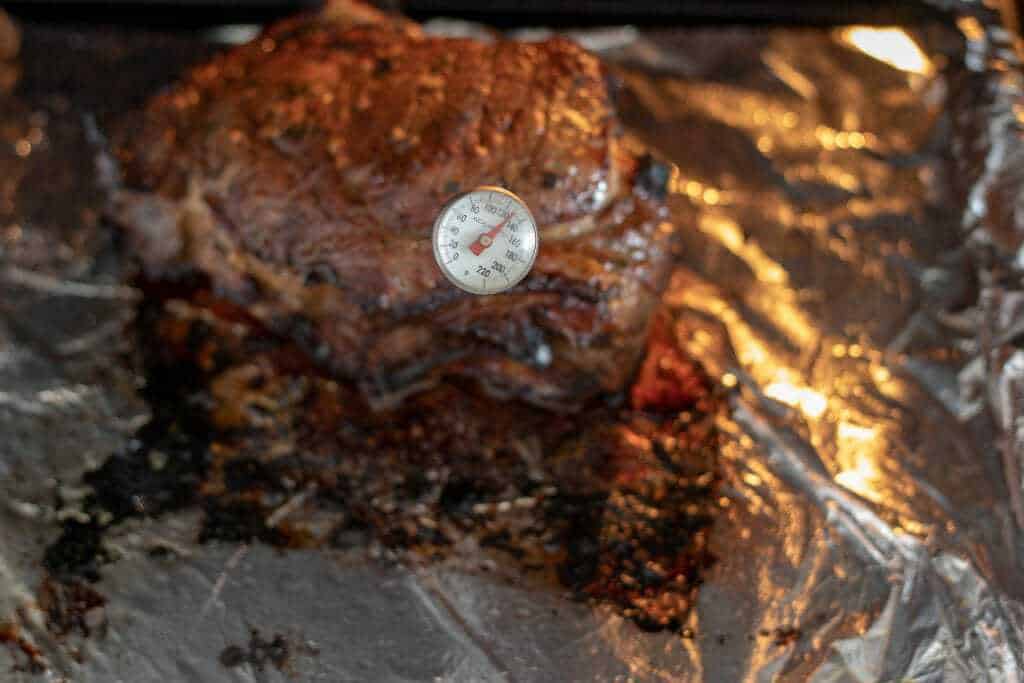 Take the cooked London broil out of the oven and place it on a cutting board. Take a piece of aluminum foil and fold in half to “tent” it over the meat while it rests for about 10 minutes. This helps to keep the meat warm while the juices spread back out through the meat rather than being concentrated in the middle. 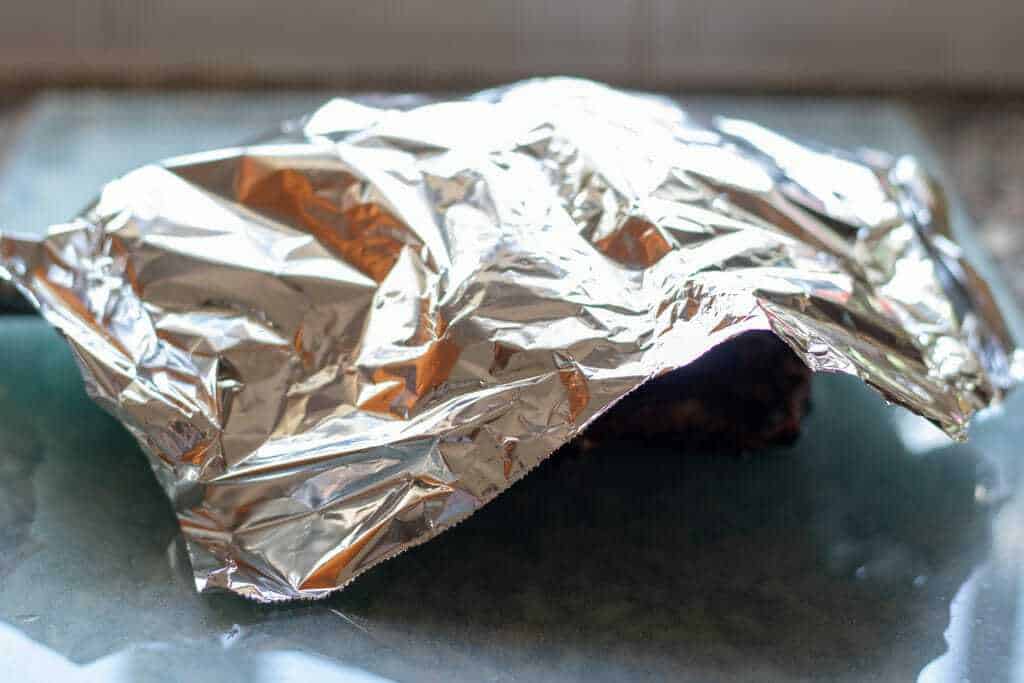 Remove the aluminum from over the London broil and set it aside. Using a sharp knife, cut the meat against the grain into thin slices. This helps to create a more tender bite on tougher cuts of meat. Serve with a bit of the chimichurri sauce spread on top to complement each bite! 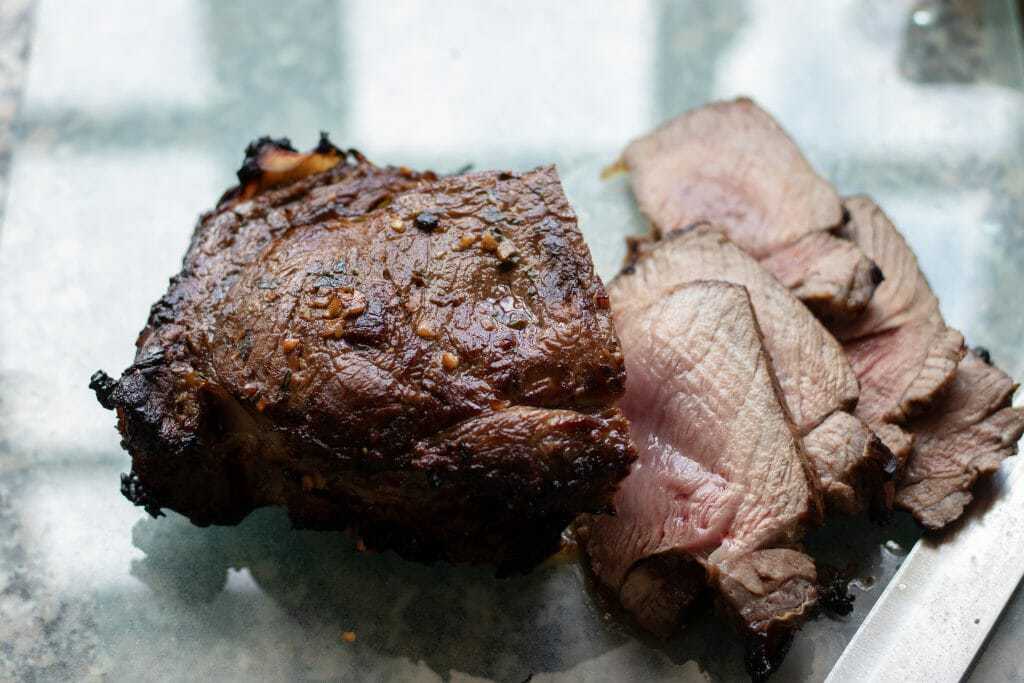 This recipe for London broil obviously doesn’t need a grill to come out perfectly, making it wonderful for those cooler autumn and winter months. However, it could be modified fairly easily to become something ideal for your next summer cook out!

Do you enjoy making London broil? What cut of beef is your favorite for this cooking method? Tell us in the comments! 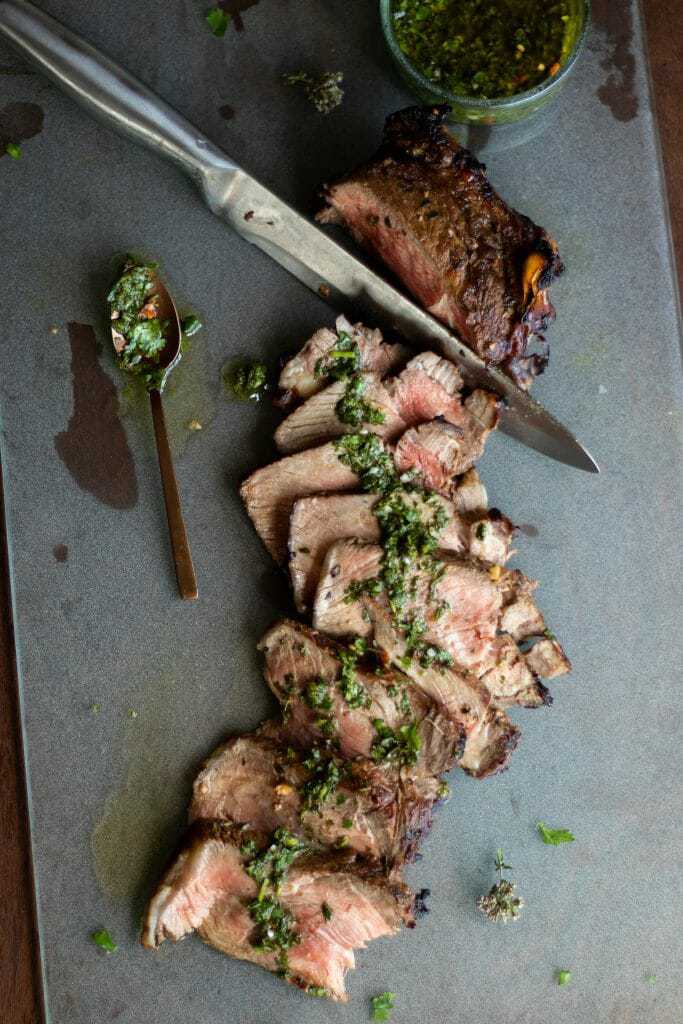