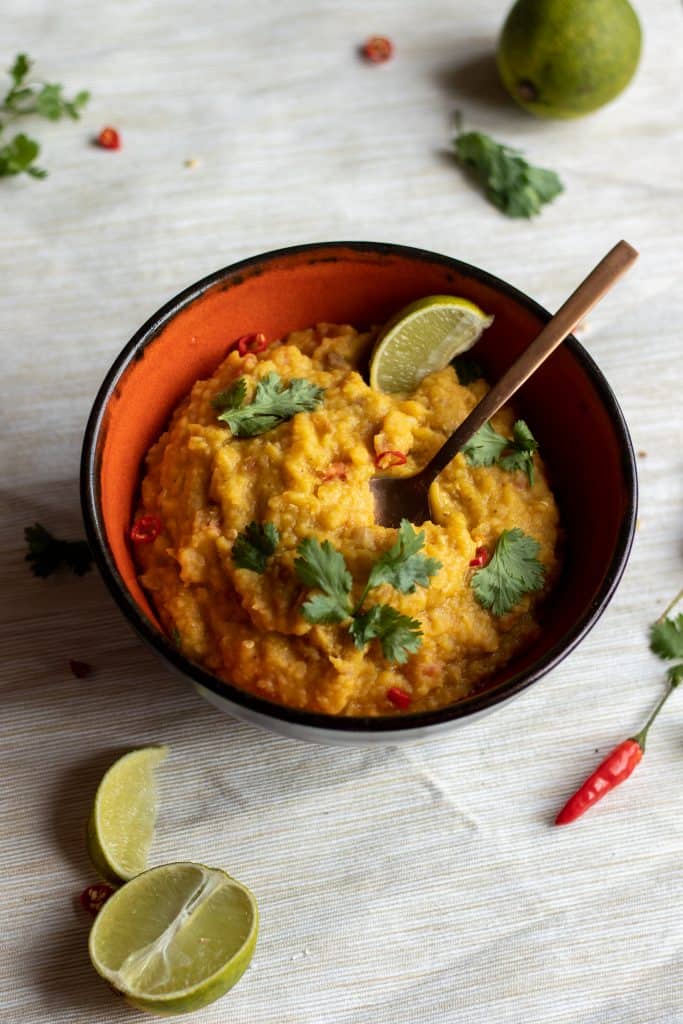 When I’m in the need of comfort food, especially the healthy variety, lentils often pop in my head. No other lentil dish is more comforting than a bowl of deeply flavorful creamy dal!

Dal has a double meaning to it, in that it can be a word associated with split lentils as well as the dish that is produced when cooking the lentils. Red lentils, or masoor dal, happen to be a personal favorite for their quick cooking time and creamy texture. The earthiness of this type of lentil also invokes a taste memory of “home” that I’ve never actually experienced but is so vivid each time I take a bite.

When stirring up a pot of dal we all know that lentils are going to be the central ingredient, but aren’t the only essential piece to the dish that’s involved. To really get a delicious and homey flavor, you must temper your spices in ghee before stirring them into the finished lentils. Tempering requires frying the spices in ghee to release their essence into the clarified fat. This is an essential step to turn a dish that is otherwise fairly bland into something amazing. A couple of chopped tomatoes and garlic thrown into the mix with those spices definitely doesn’t hurt any either!

Speaking of ghee, it’s perfectly fine to go ahead and grab a jar from your local store, but it’s so easy to make it at home that I just never do. It only takes a bit of butter, a little extra time, some straining and you’re good to go. It also never hurts to have just a bit extra in the fridge for your next batch of dal.

Now that you have a good idea of what and how to create a delicious authentic dal, it’s time to get into the kitchen and give it a go! 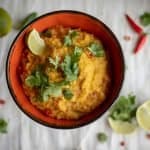 This recipe makes more ghee than you need. Keep it in a sealed container like a jar for later use for any recipes that require ghee, butter, or use when sauteing foods instead of using oil.

STEP ONE – PREPARE THE INGREDIENTS

Remove the stems from the tomatoes before dicing them on a cutting board with a chef’s knife. Peel the onion and garlic and remove the root ends of each before chopping them. Peel the ginger and turmeric before finely chopping them as well. Lay the chilies on the cutting board and cut off the stems of each one and slice one thinly with the seeds still intact. The other chili slice it down the middle and remove the seeds. 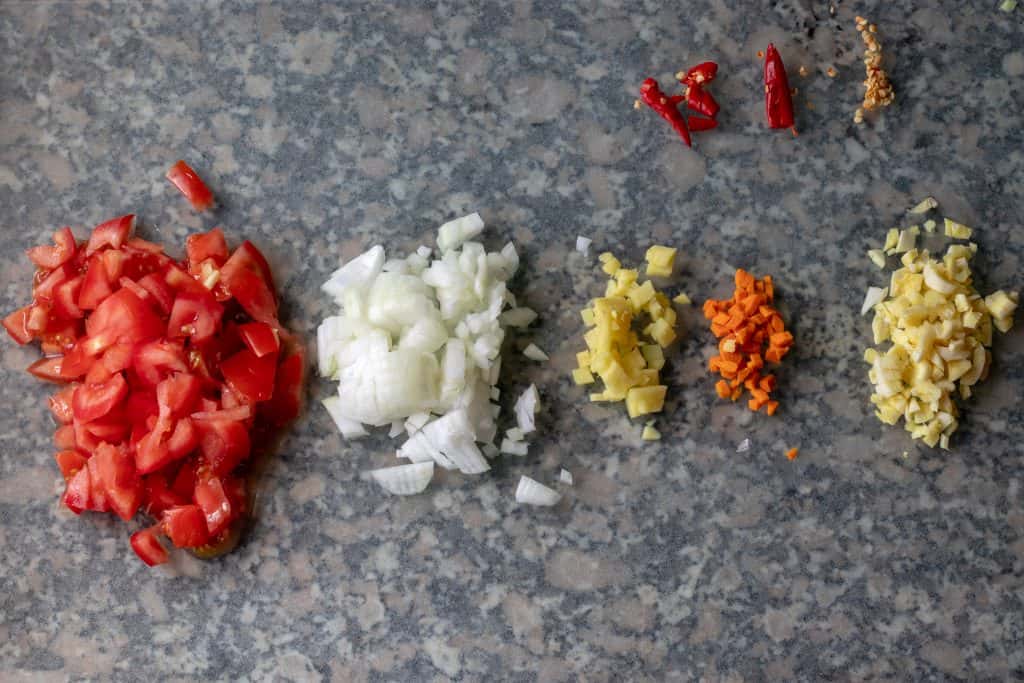 Pour the dried lentils into a mesh strainer and run cold water over them to rinse them thoroughly. The water will run clear when they are well rinsed. 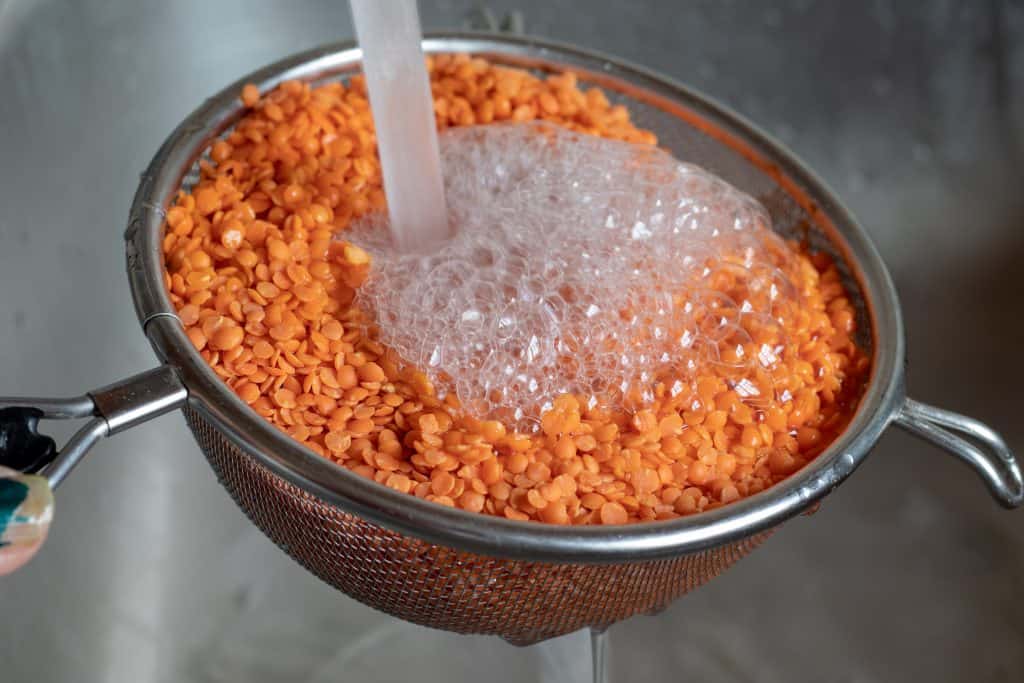 Place the butter into a small saucepan and place it on the stove top over medium-low heat. Allow it to melt all the way down and wait for it to come to a simmer. 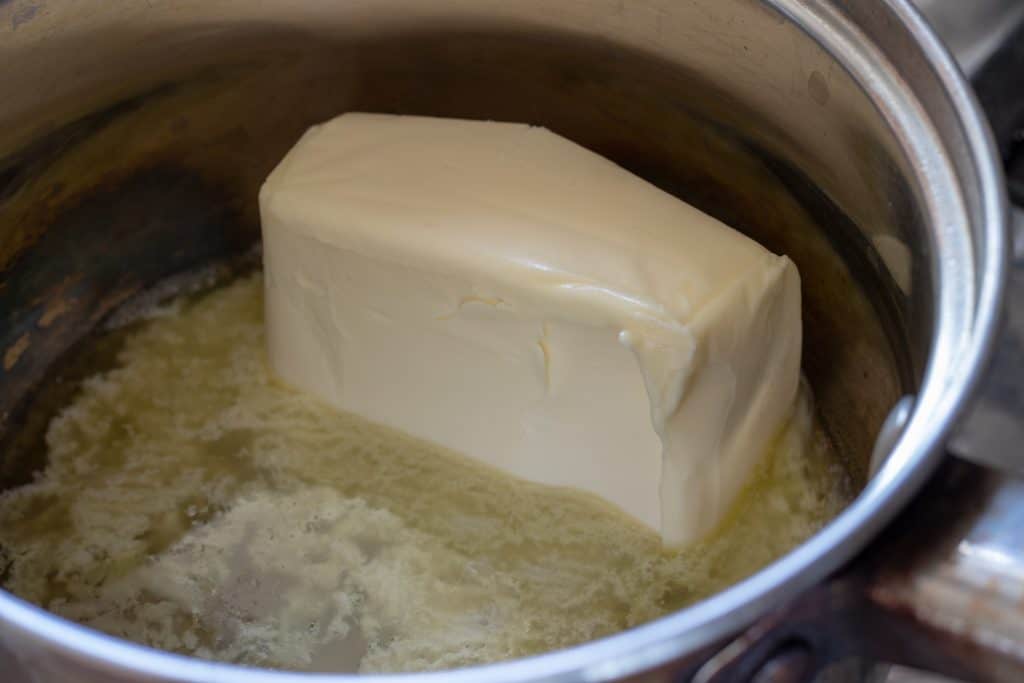 As it simmers foam will form on the top as the butter layers separate from each other. With a spoon, skim the foam off the top and discard it. Once the clear golden middle layer has separated completely from the thick milk solids layer at the bottom turn off the heat.

Using a mesh strainer, pour the clear portion of the butter through it into a container such as a glass jar. Don’t allow the thick solids into the mixture. 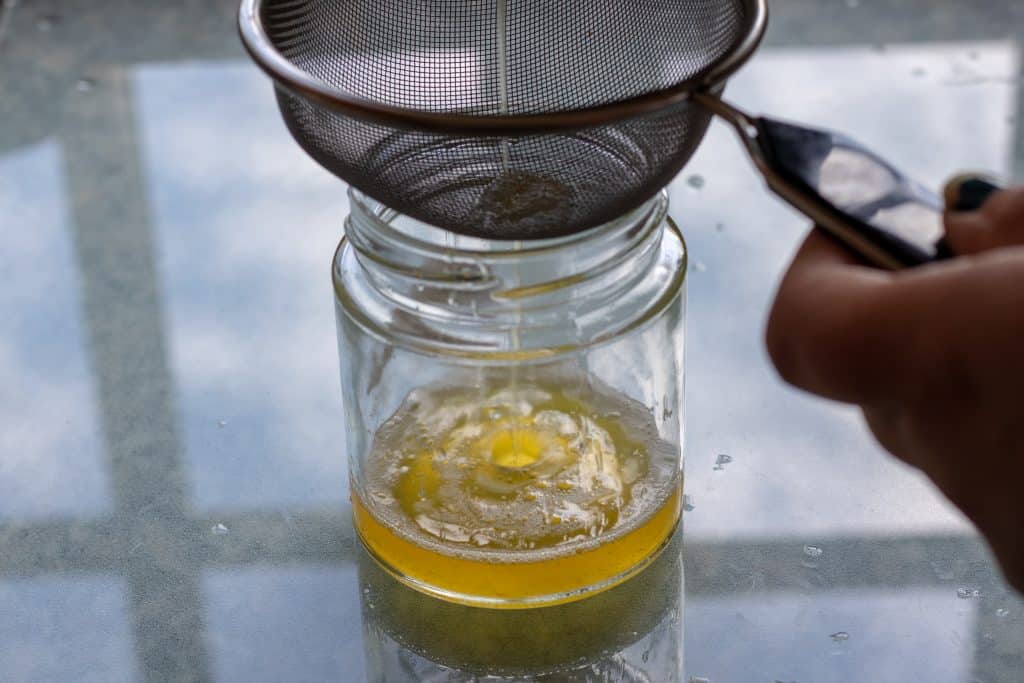 STEP FIVE – MAKE THE BASE FOR THE LENTILS

Spoon the ghee into a soup pot over medium-high heat. Add in the onion, ginger, turmeric, one cinnamon stick, and the seedless chili pepper. Stir the onions and spices into the ghee to distribute them around the pot and allow them to soften and become fragrant. Remove the chili pepper for a less spicy dal. 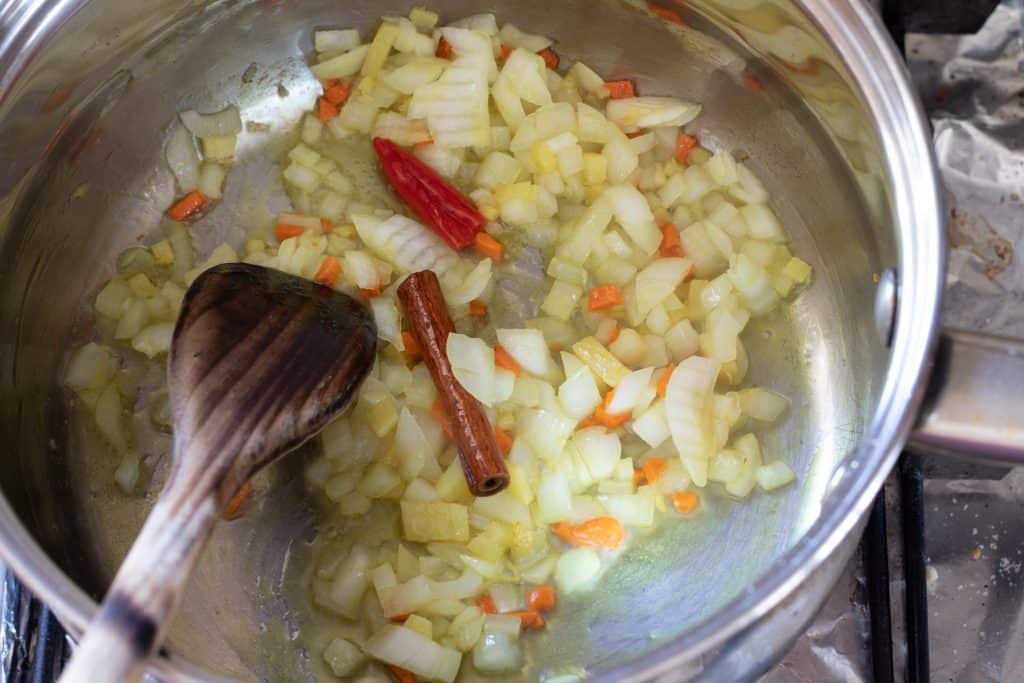 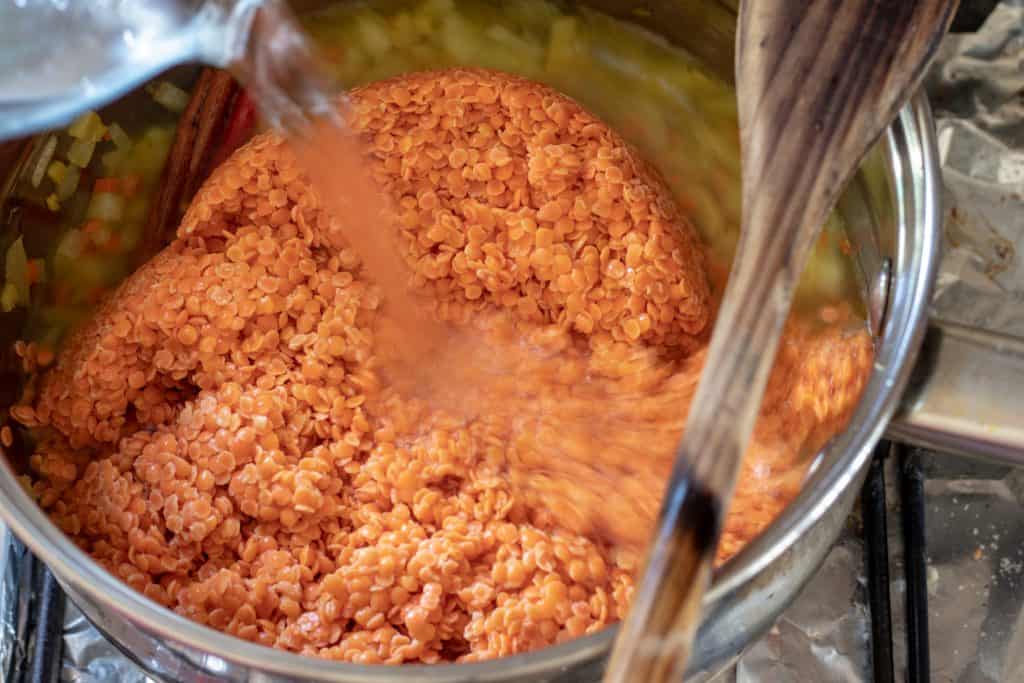 Place the lid on top of the pot askew so that steam can escape, reduce the heat, and let the lentils come to a simmer. The lentils will be done when much of the water has been absorbed by the lentils and has become an almost “creamy” consistency but still with texture. Stir in more water if it becomes too dry as they cook so that they don’t burn. 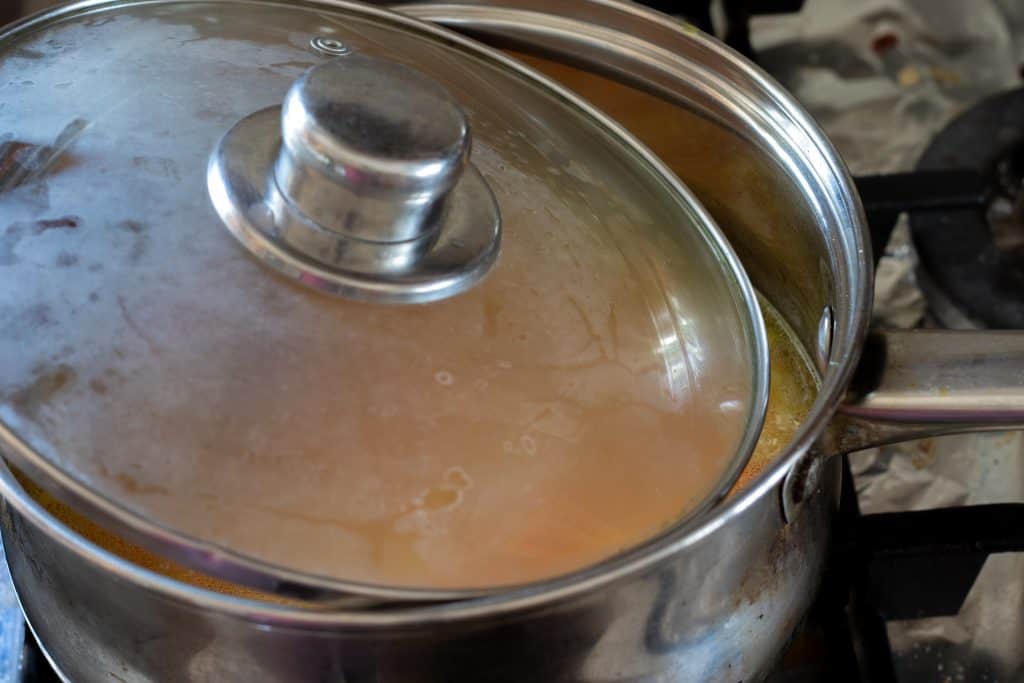 While the lentils cook down to make the dal, temper the spices. 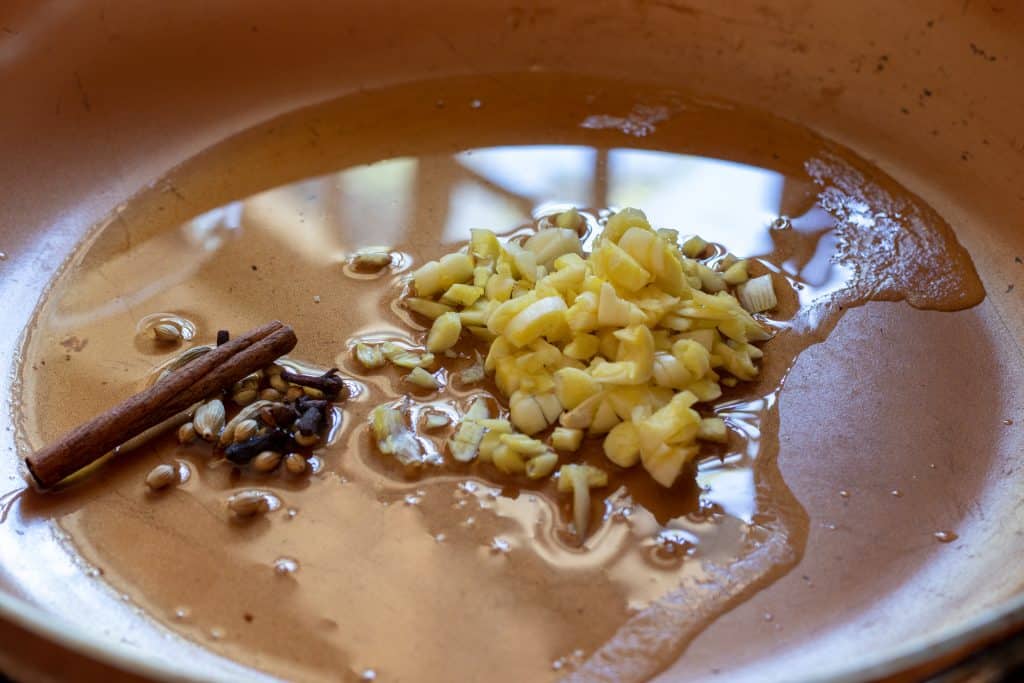 Add another couple of tablespoons of ghee to a saute pan or skillet. Toss in the garlic, cinnamon stick, cloves, cardamom, fennel seeds, coriander seeds, and the other chili pepper. Stir them into the ghee so that they are all coated with it and allow them to cook until very fragrant. 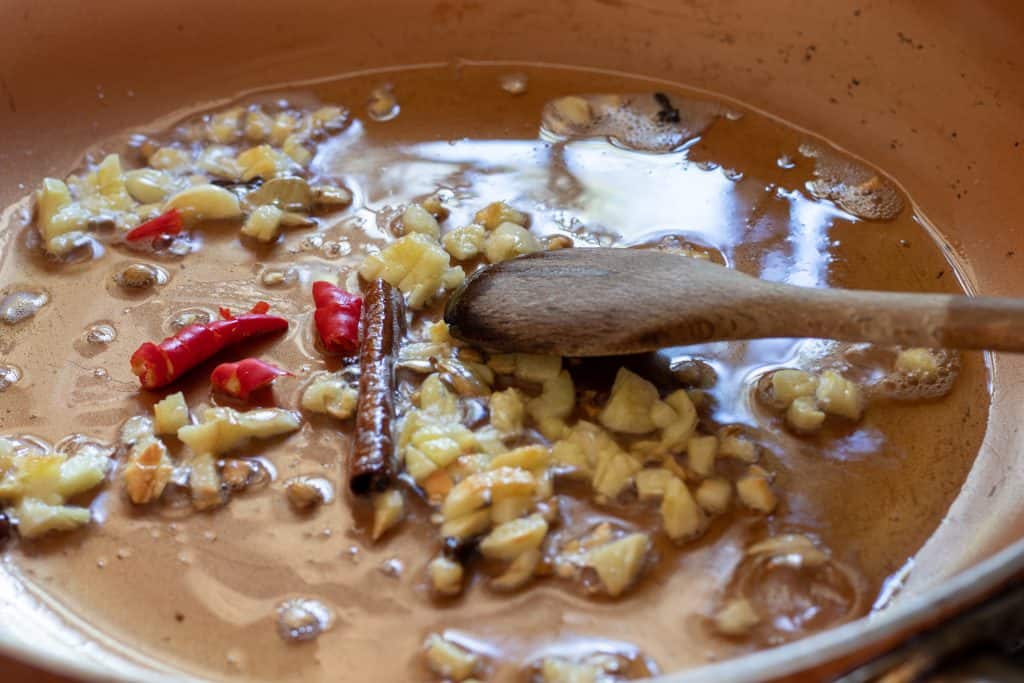 STEP EIGHT – ADD THE TOMATO TO THE SPICES

Add the tomatoes, ground cumin, and black pepper to the pan. 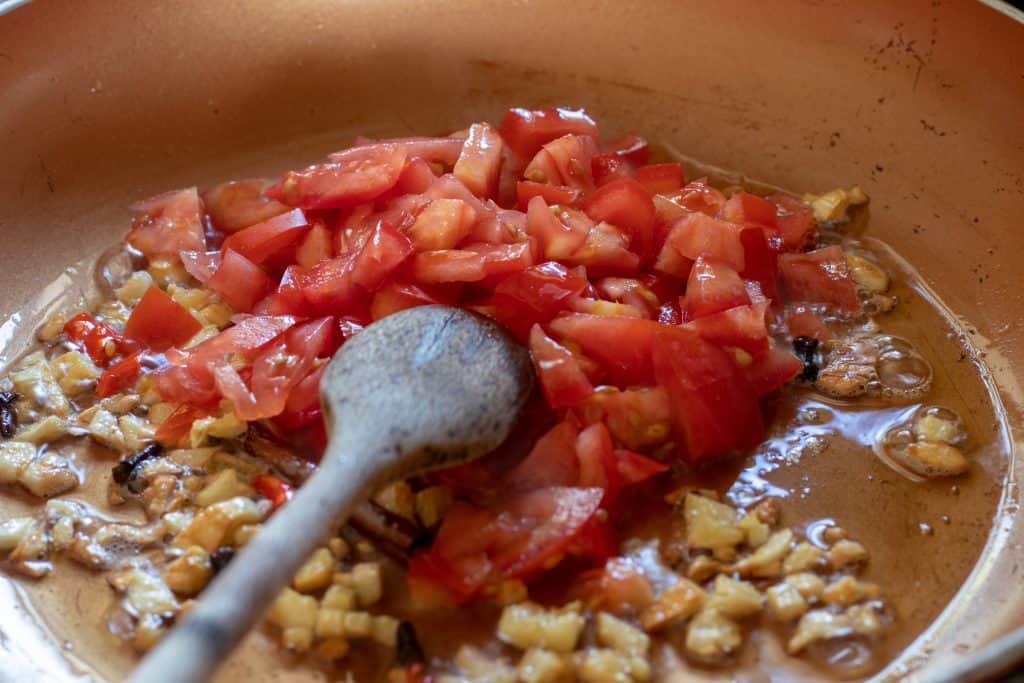 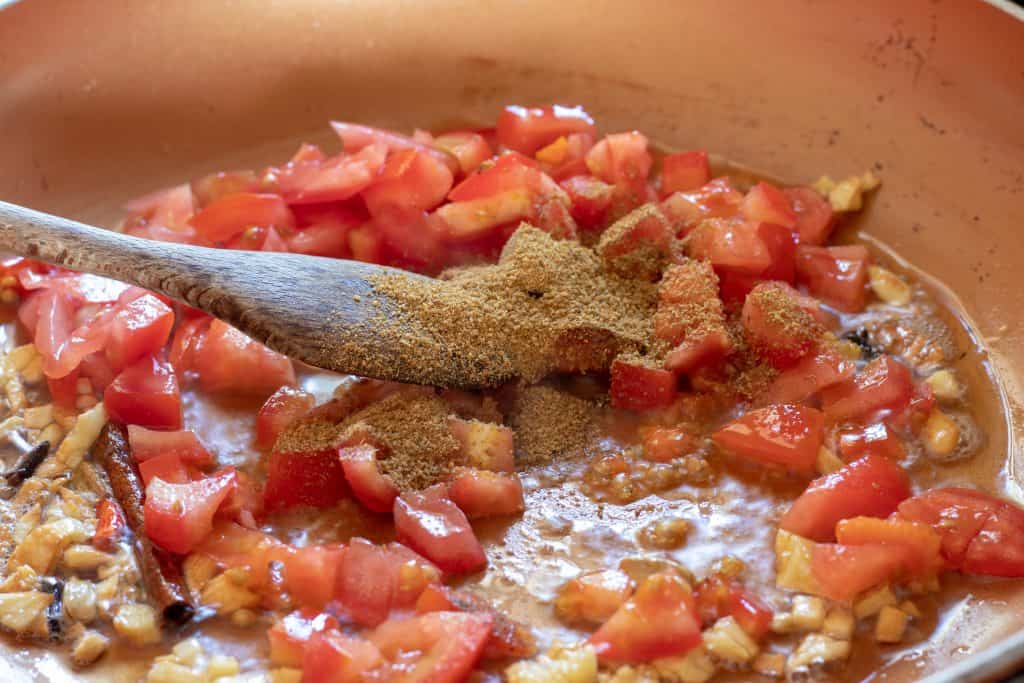 Stir them in well and let them cook another 5 or so minutes. 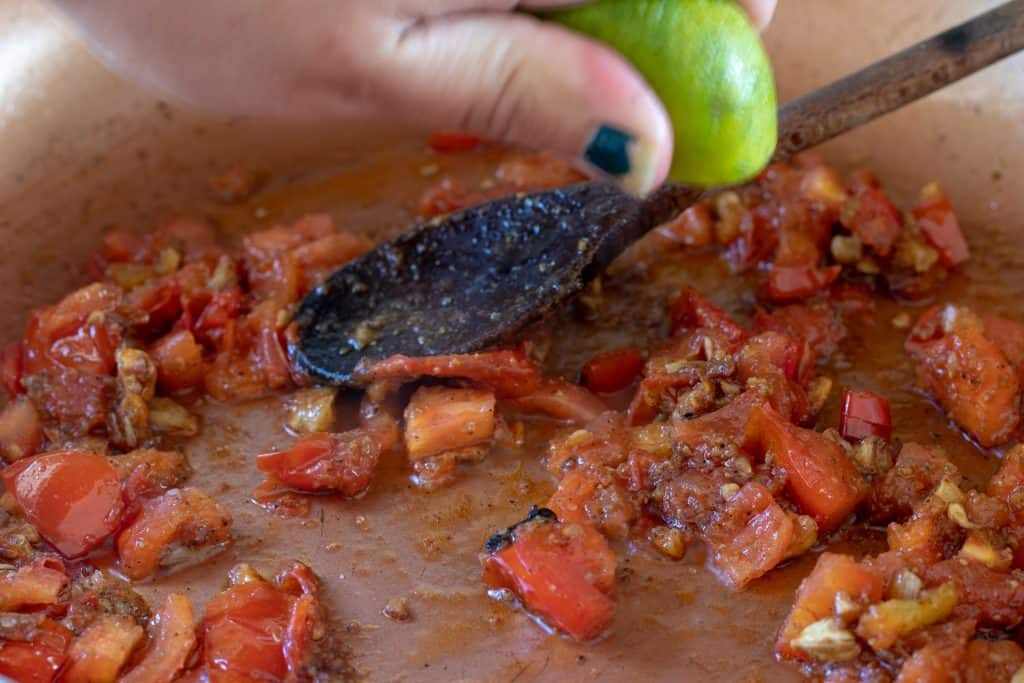 With a wooden spoon, scrape the tomato mixture into the dal when it’s done cooking. 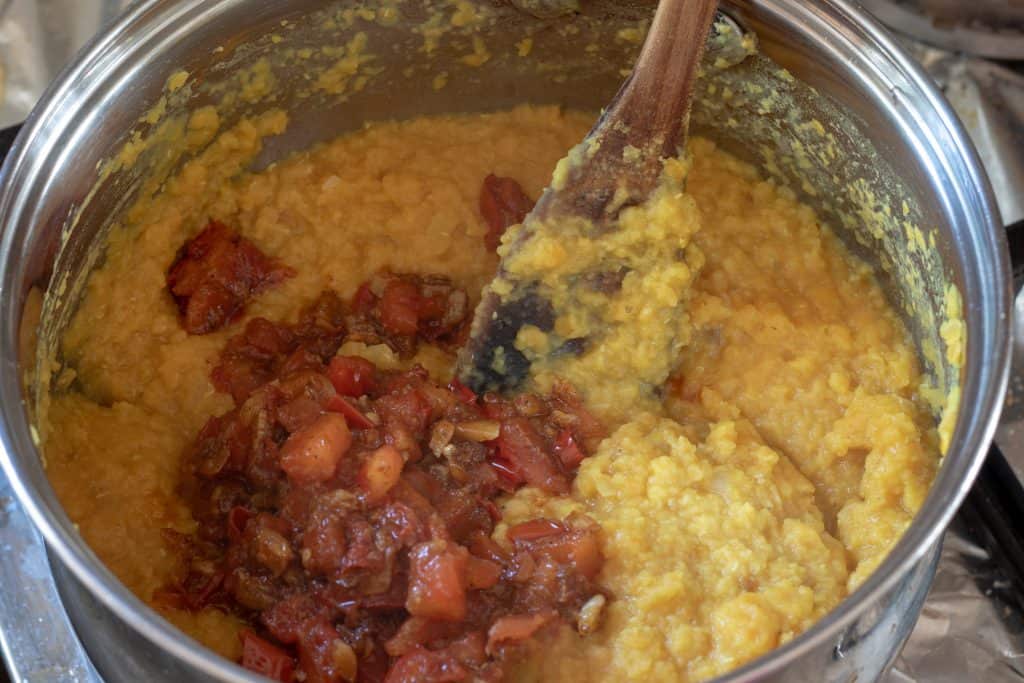 Stir it into the mixture and remove any inedible chunks like the cinnamon sticks and large pieces of ginger and turmeric. 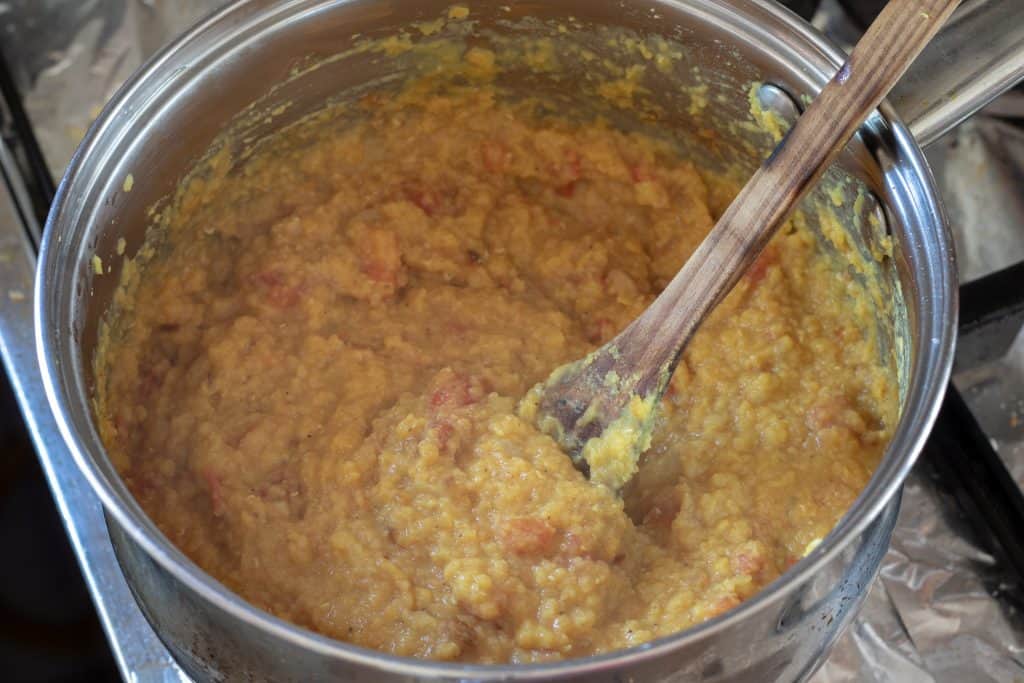 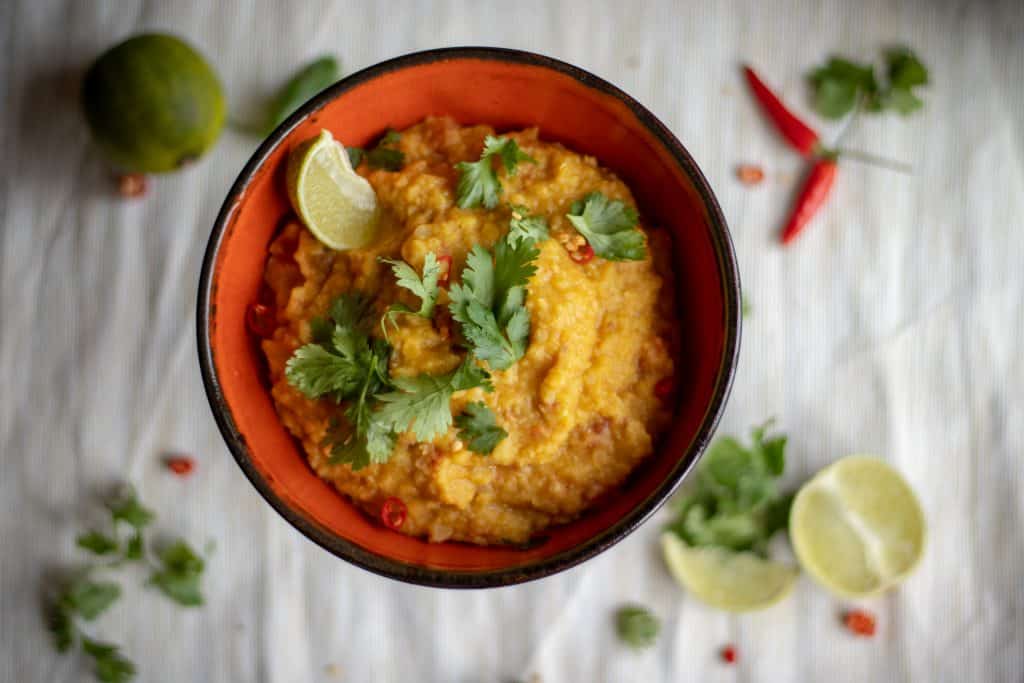 This dal is sure to become a go-to meal in your home after a few tries. Try it with steamed basmati rice, naan bread, or as an accompaniment to your favorite curry. Let us know your favorite dal and how you like to serve it in the comments!