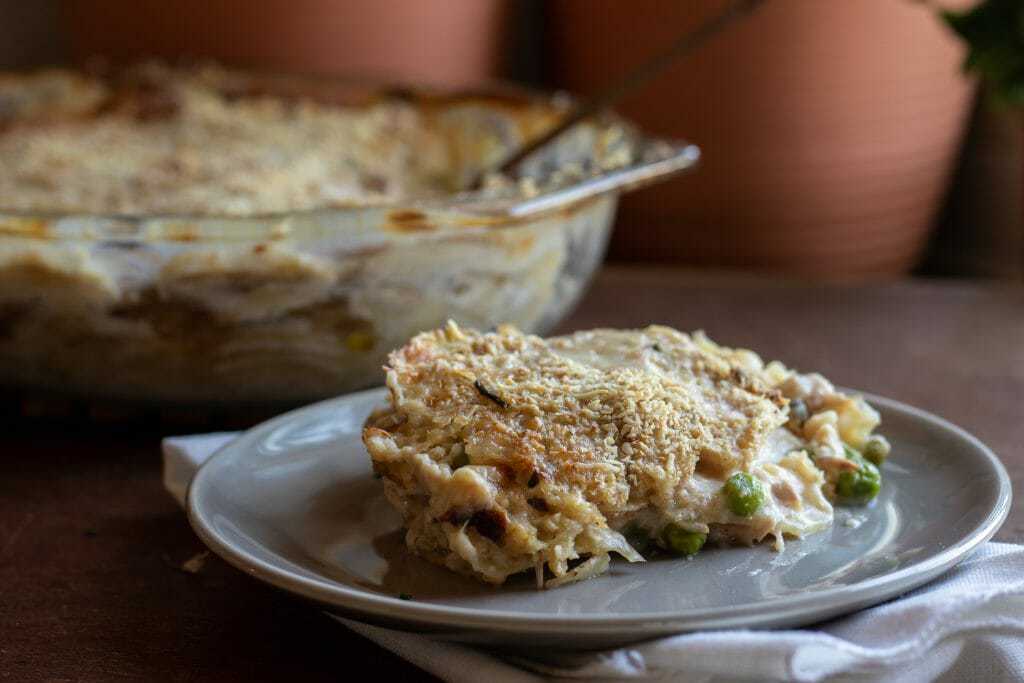 When the leaves turn red, orange, yellow and the air starts to carry a chill of frost in it I begin to crave something comforting to eat. Often these dishes are one pot affairs with that include a tender starch like pasta, rice, or potatoes and prepared in the form of a casserole. One such dish is a tuna casserole, but it can become so boring after doing it a specific way for so many years. That gave me inspiration to combine it with another lovely comfort food; scalloped potatoes!

Tuna casserole is usually made with the idea of using primarily pantry items such as canned tuna, dried pasta, and other canned or dried vegetables and herbs. This is a great way to conserve on expenses while also providing a quick way to whip up a hearty dinner. In order to keep a bit of that ease incorporated in this dish, I decided to use the canned tuna for this recipe, but looked toward toward a few other staples that were less preserved for the other ingredients.

Instead of the usual noodles, thinly sliced potatoesare used, and the creamy sauce they usually swim in to make the scalloped dish have been saturated with the tuna and a couple handfuls of frozen peas. The sliced potatoes are then coated in layers of the sauce and topped with a mixture of sharp cheddar and ground oats that melts and creates a crunchy crust.

The two dishes combined may sound a bit on the rich side, but I promise they work well together and will be a welcomed deviation from the tried and true classics! 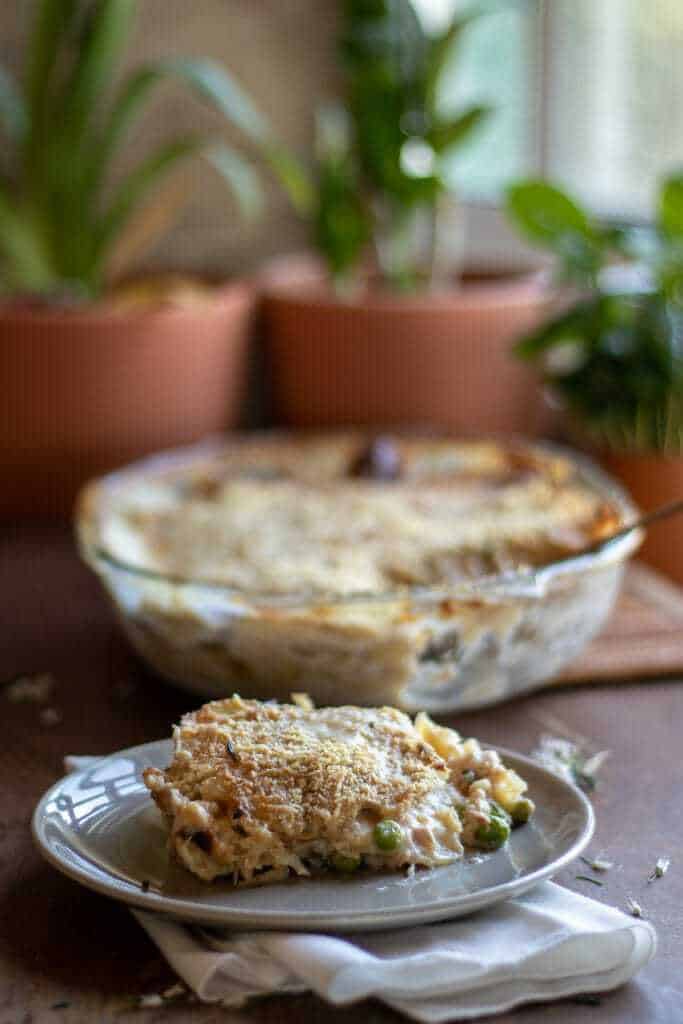 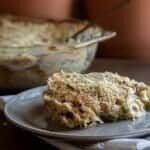 STEP ONE – PREPARE THE POTATOES

Turn the oven on to 375F to preheat while preparing the ingredients for the casserole. 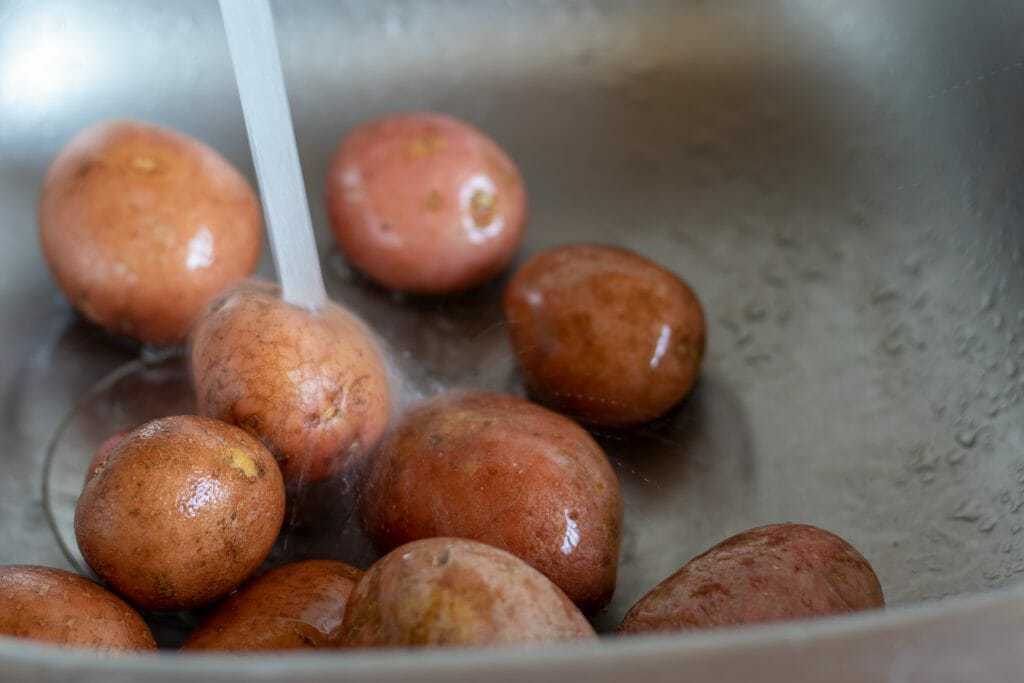 Wash the potatoes thoroughly, scrubbing the skin well to remove any dirt as we are keeping the skin on. Using a sharp chef’s knife or mandoline slicer, thinly slice the potatoes. 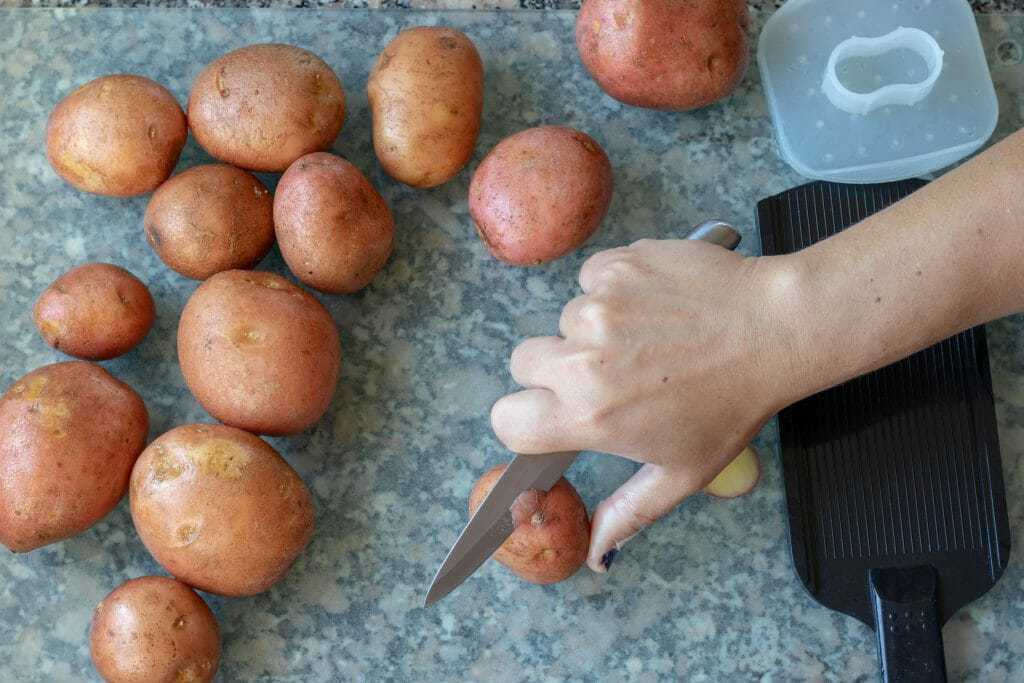 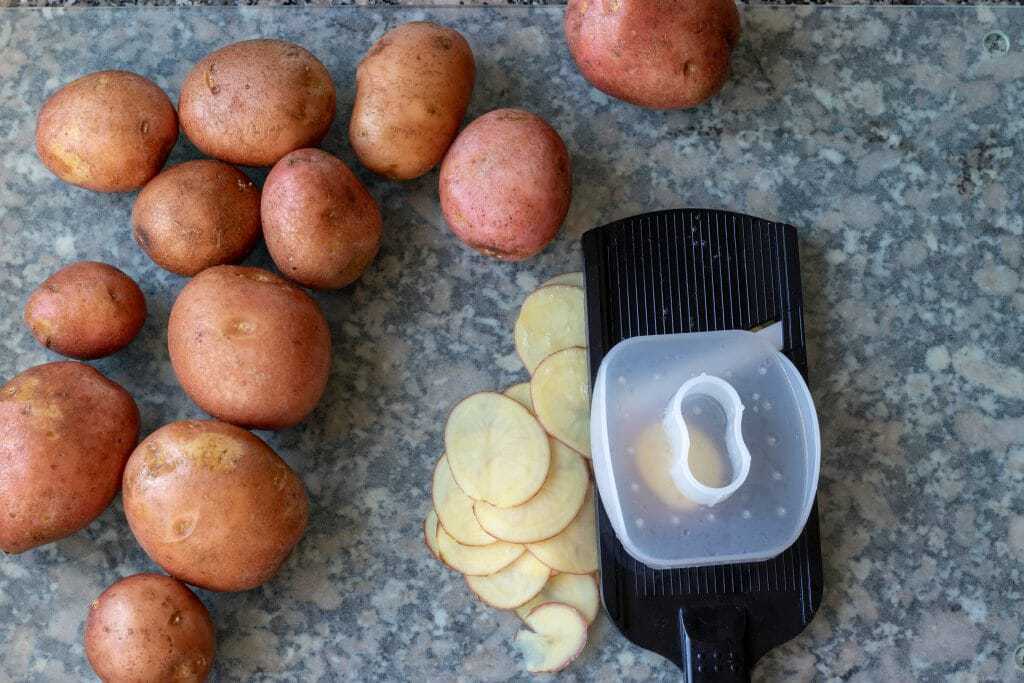 Transfer the slices to a bowl and fill it with water to pull out excess starch from the potatoes. 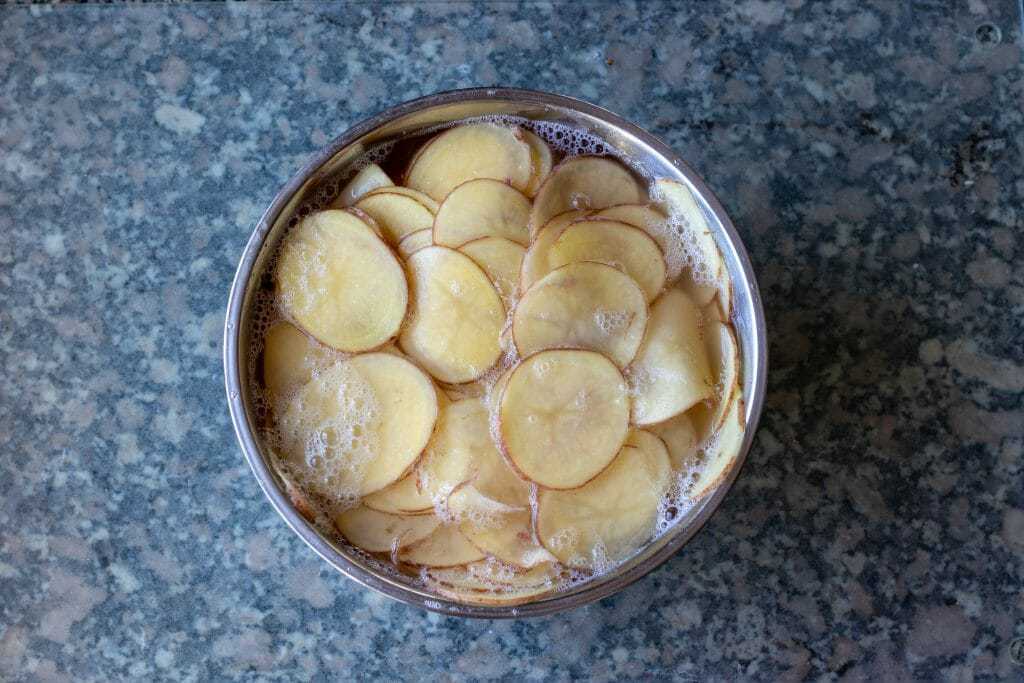 Peel the onion and garlic. Rinse the chives under cool water. Mince the garlic, chop the onion, and chop the chives. 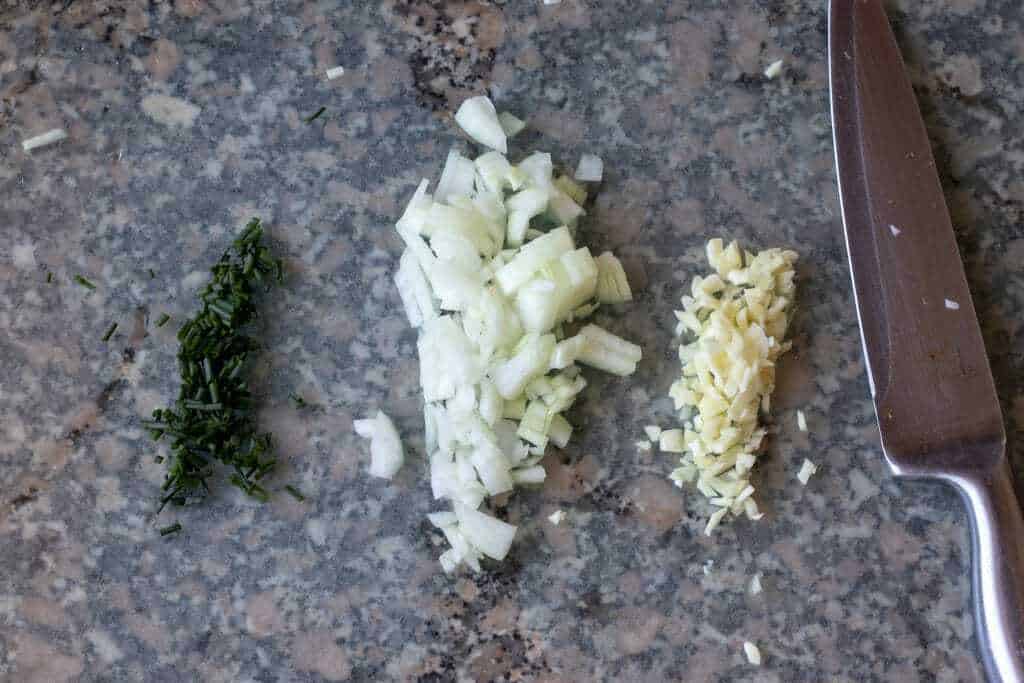 In a bowl, mix the ground oats and shredded cheddar together. 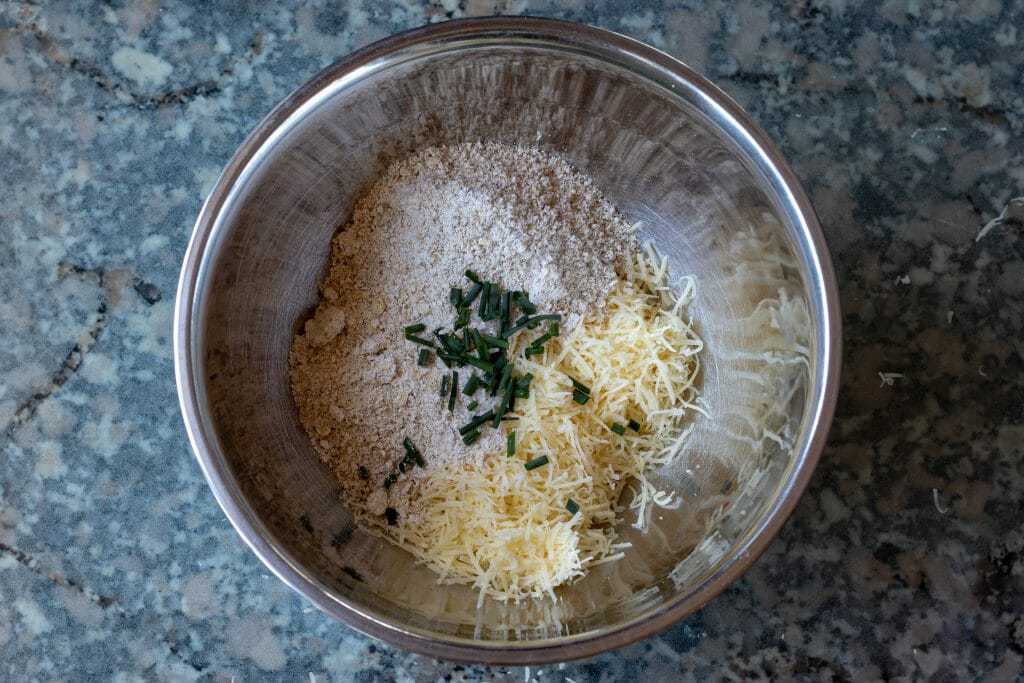 Add in the chives and stir again. Set them aside. 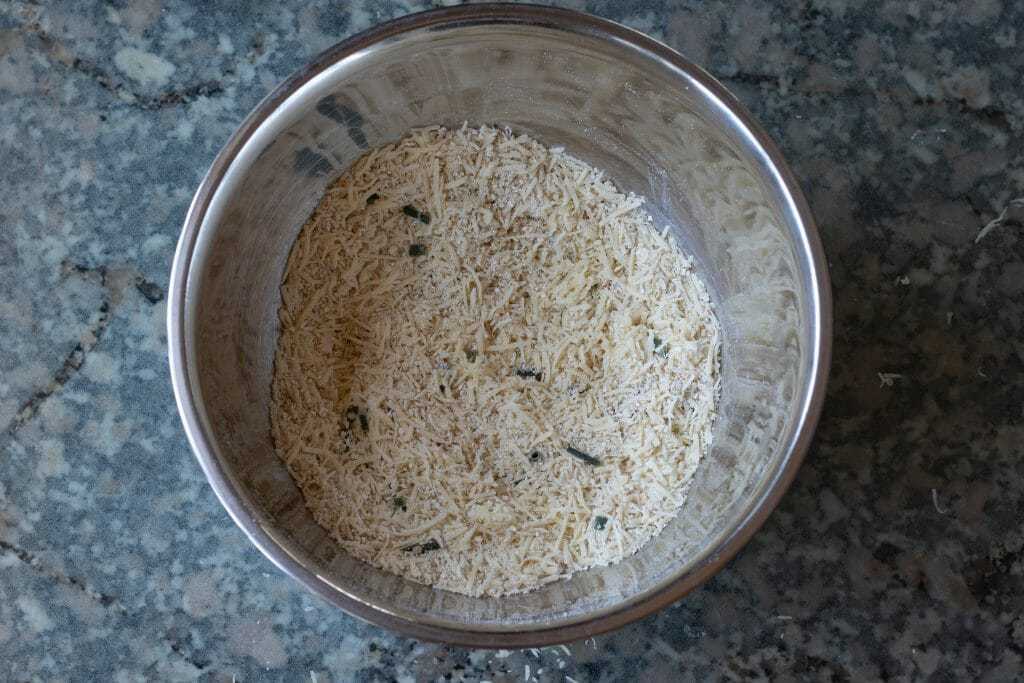 Pour the potato slices into a colander to drain from the water. Shake the colander to release any excess drops and let sit in the sink while preparing the sauce. 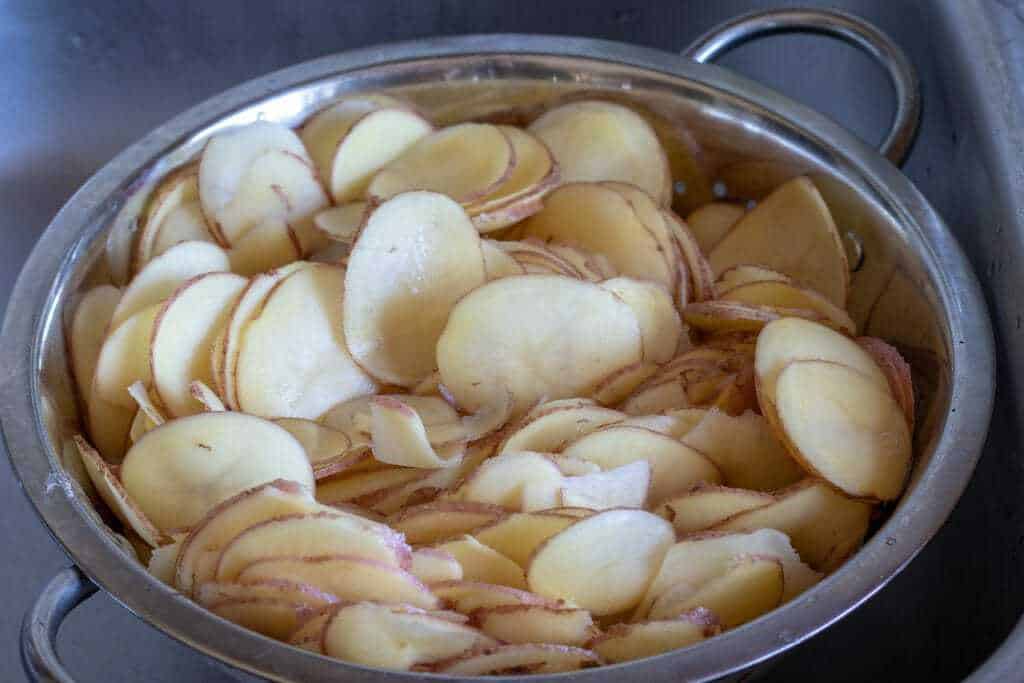 Pour olive oil into a saute pan or skillet and heat it over medium-high heat. Once the oil is hot, add in the onion and garlic and cook 3-4 minutes, stirring frequently. 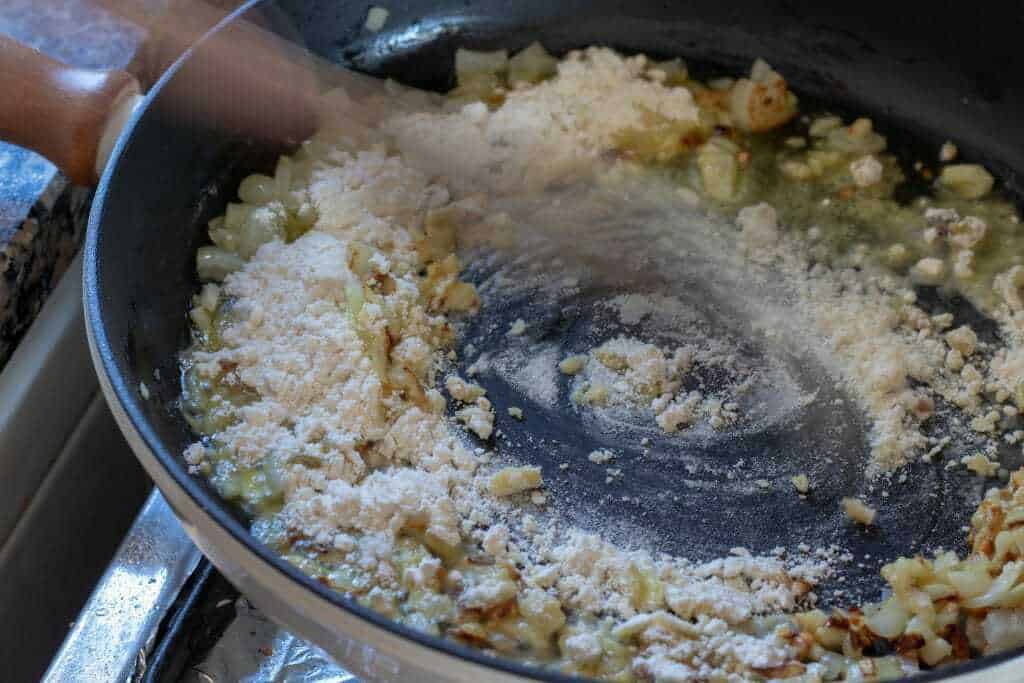 Sprinkle the flour into the pan, while stirring, and allow it to coat the onions, garlic, and soak up any of the oil in the pan to make a paste. 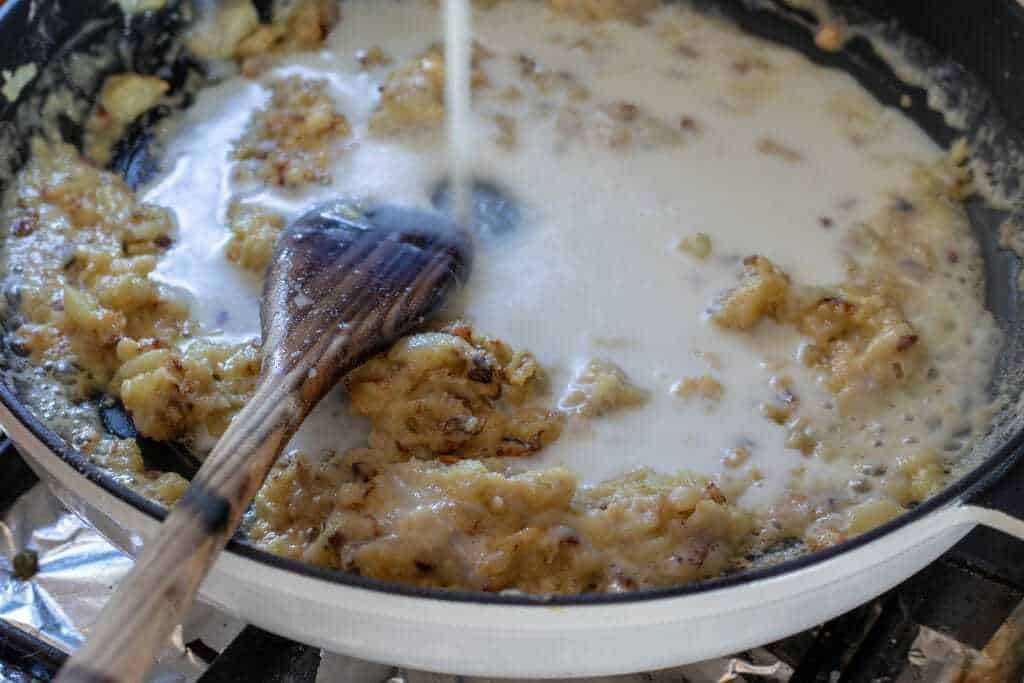 Cook 2-3 minutes to remove the raw flavor from it. Stir in the milk, still stirring until it’s all incorporated. Let the sauce simmer and thicken. 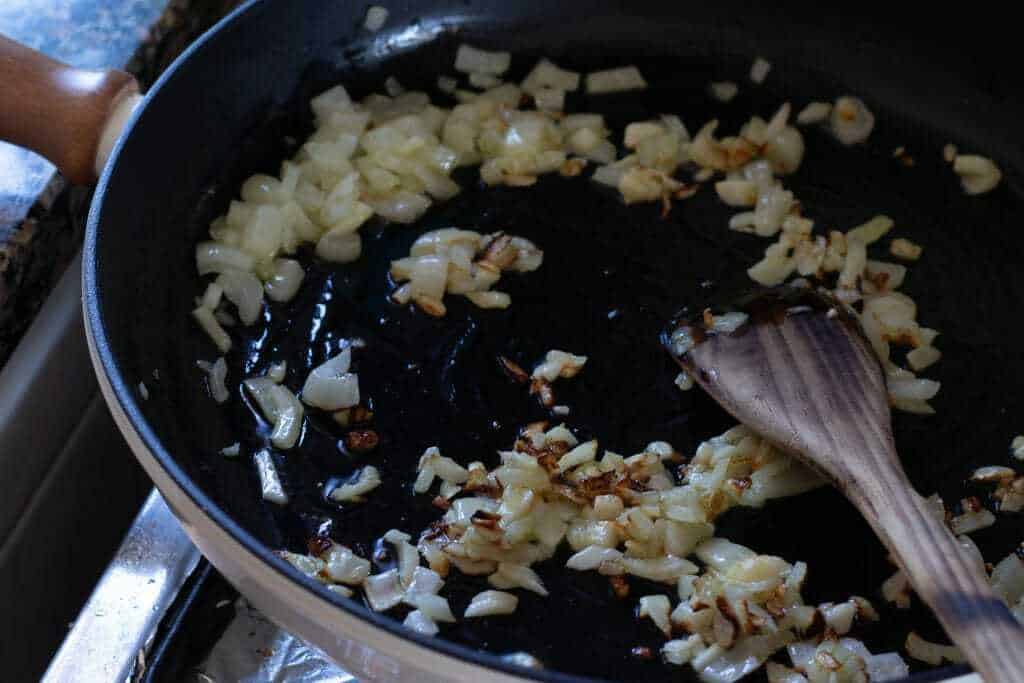 Add the tuna and the peas to the sauce and stir well. 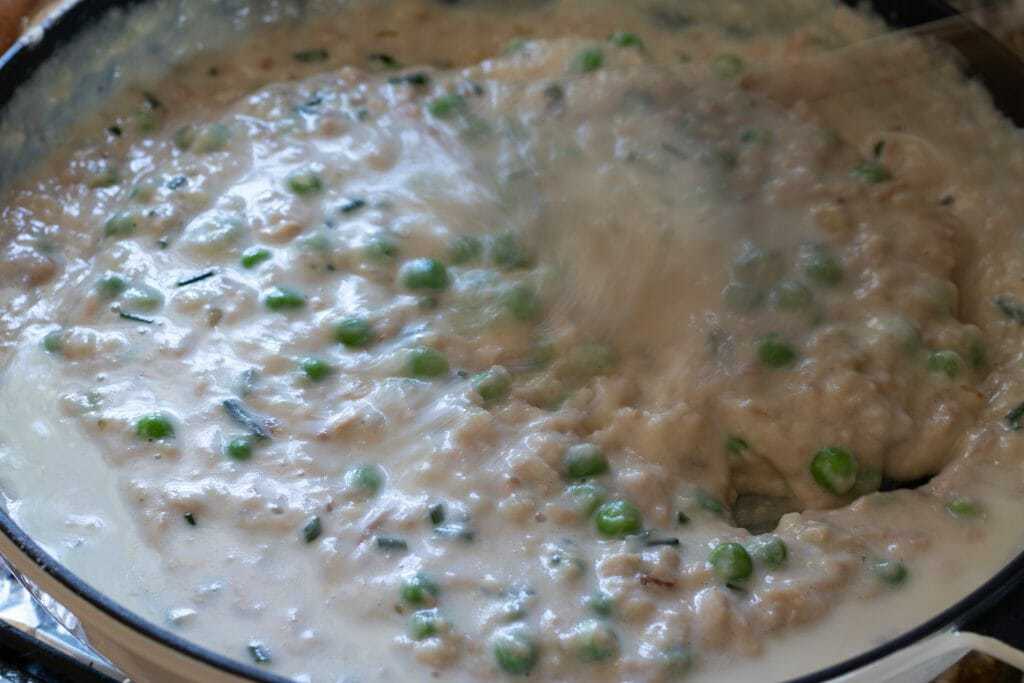 Season with salt, pepper, and the rest of the chives and stir again. 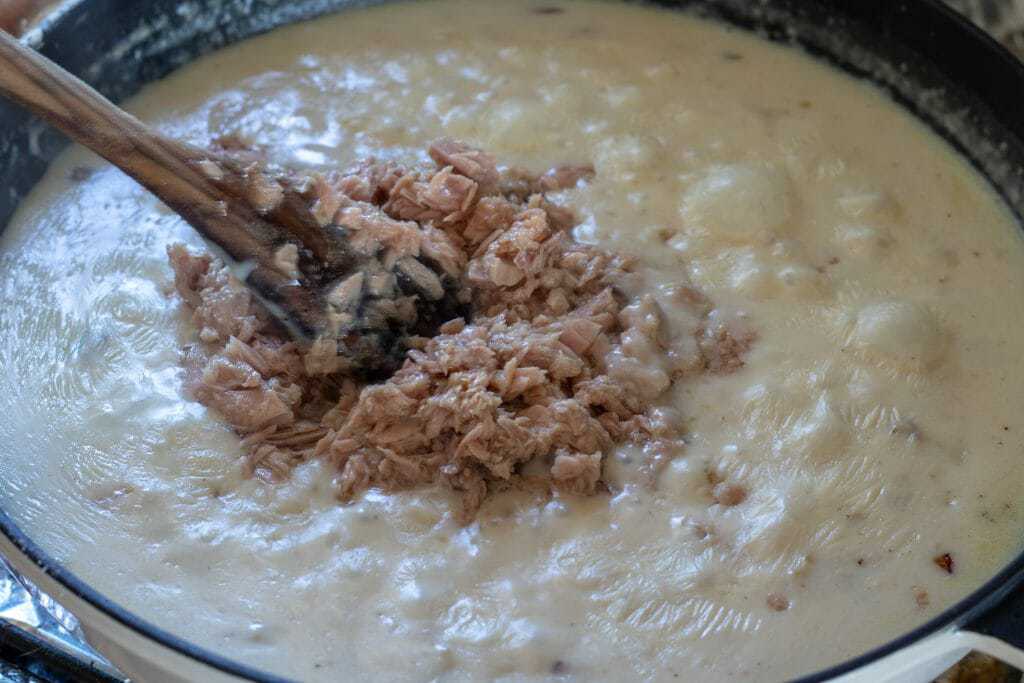 Ladle some of the sauce into the bottom of a casserole dish. 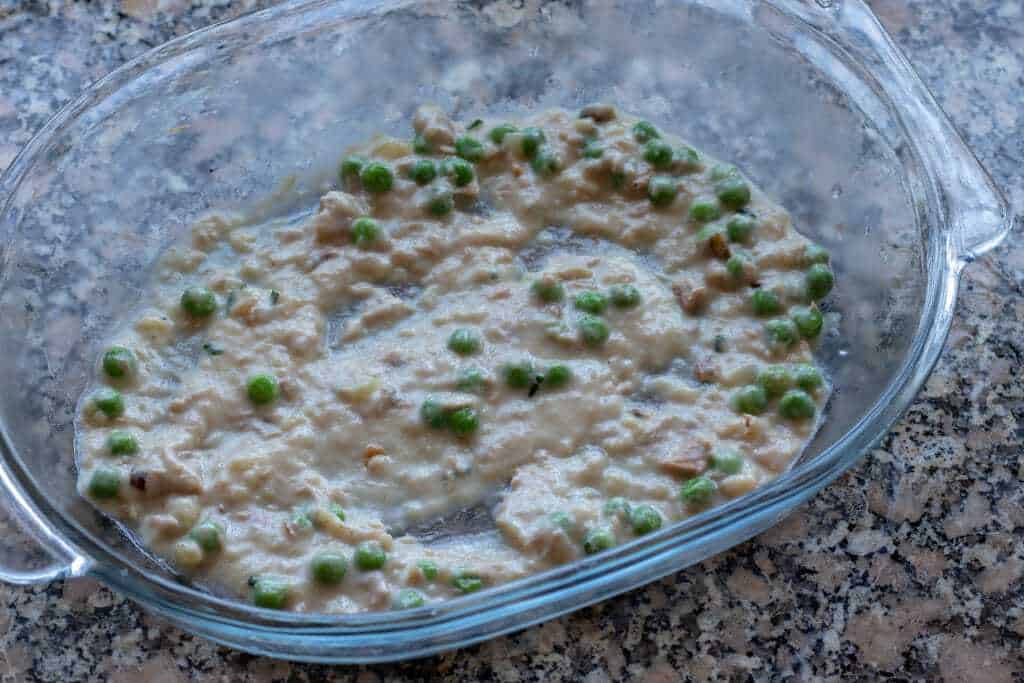 Layer some of the sliced potatoes into the dish to cover the bottom. 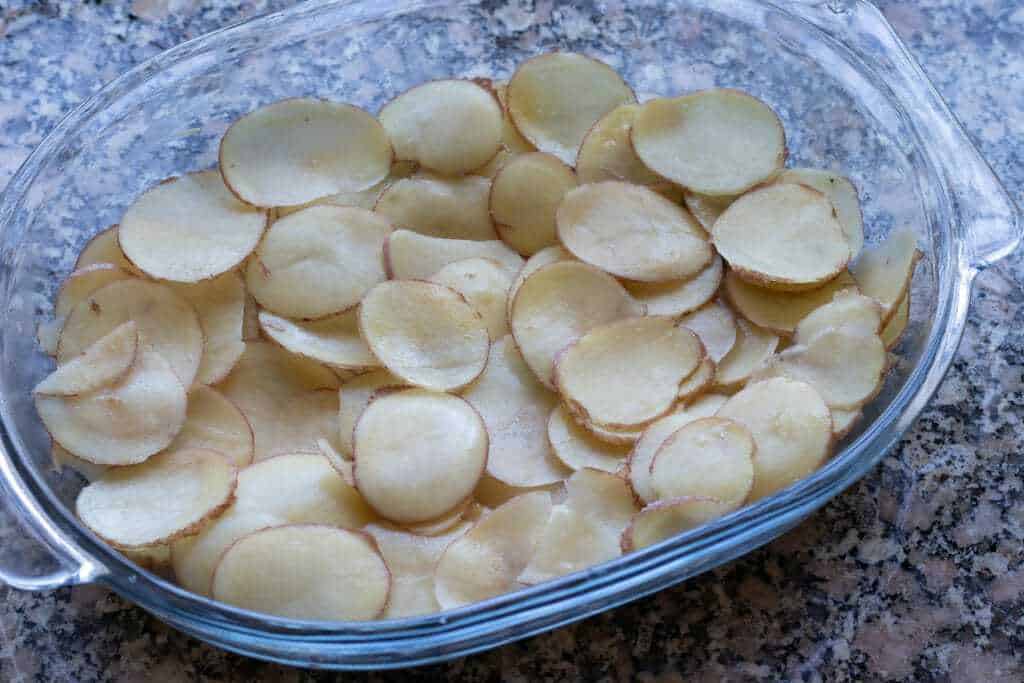 Spread more sauce on top, then more potatoes. Continue until all of the potatoes and sauce have been used. 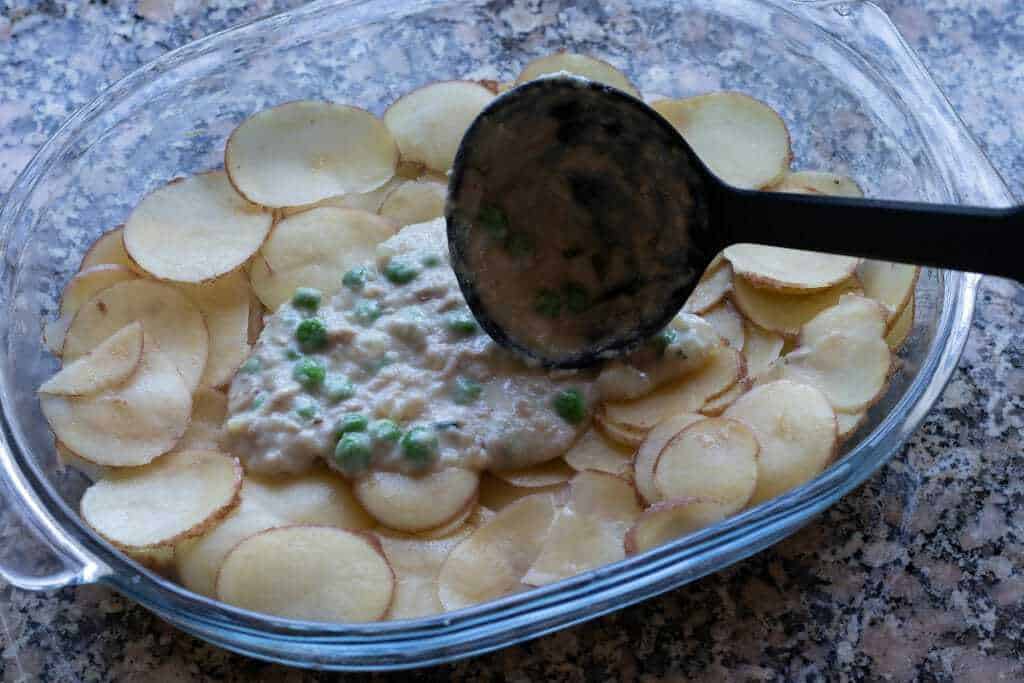 Finish with the sauce on top before sprinkling the mixture of ground oats and cheese in a thick layer on top. 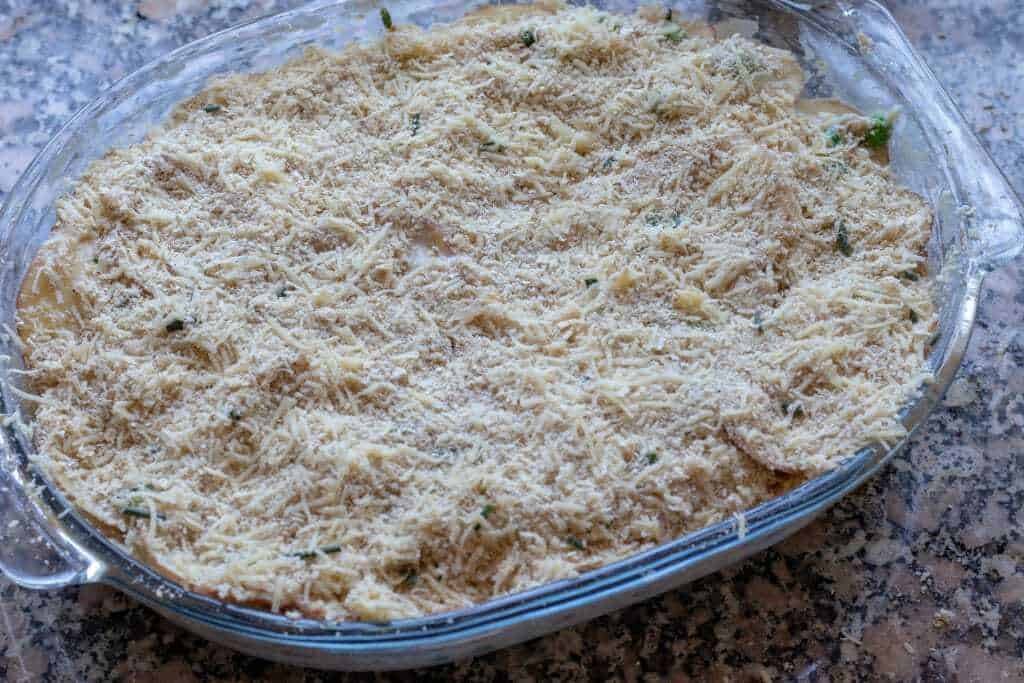 Cover the dish with aluminum foil. 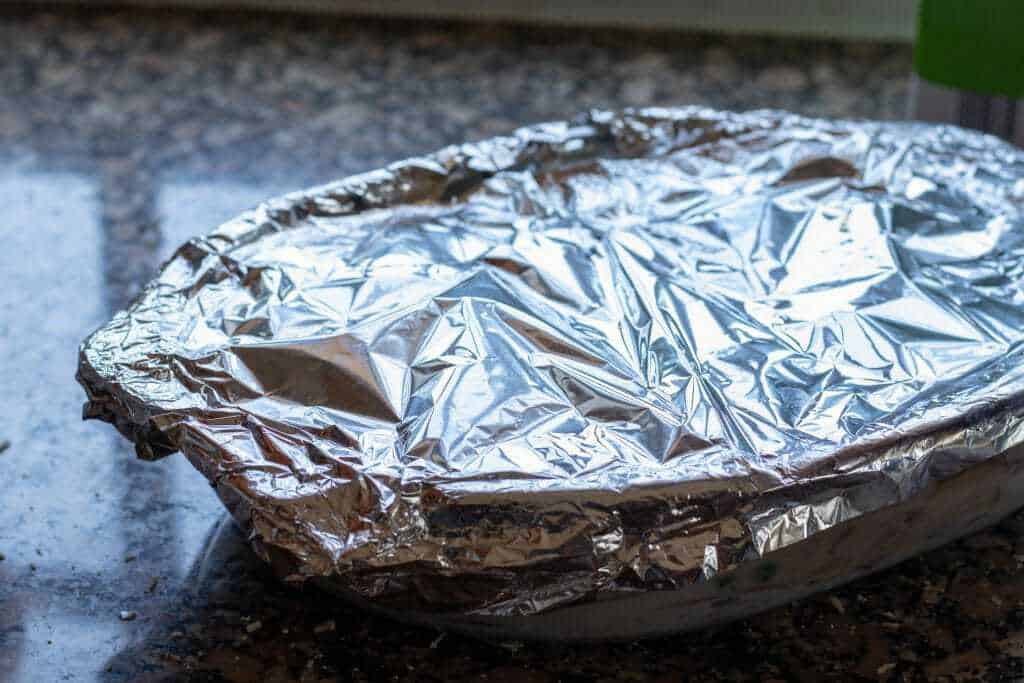 Place the casserole in the oven to bake about 35 minutes. At that time, remove the aluminum foil and allow the casserole to continue cooking for another 10 minutes so that the top browns and the cheese has melted. 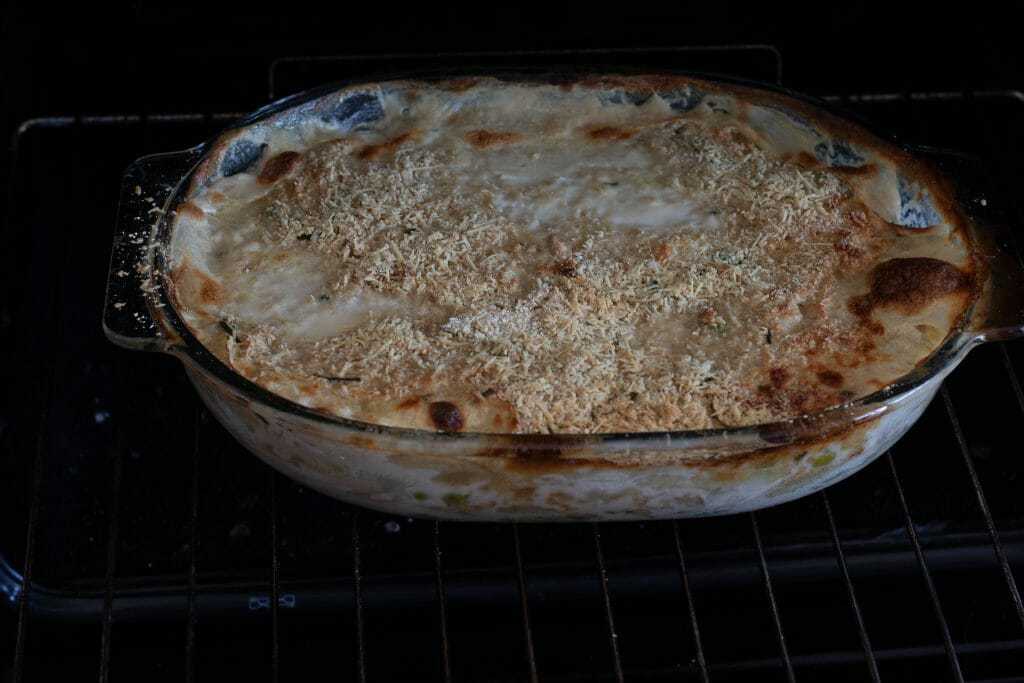 Turn off the heat and remove the casserole from the oven. Allow it to cool for 10 minutes before serving. 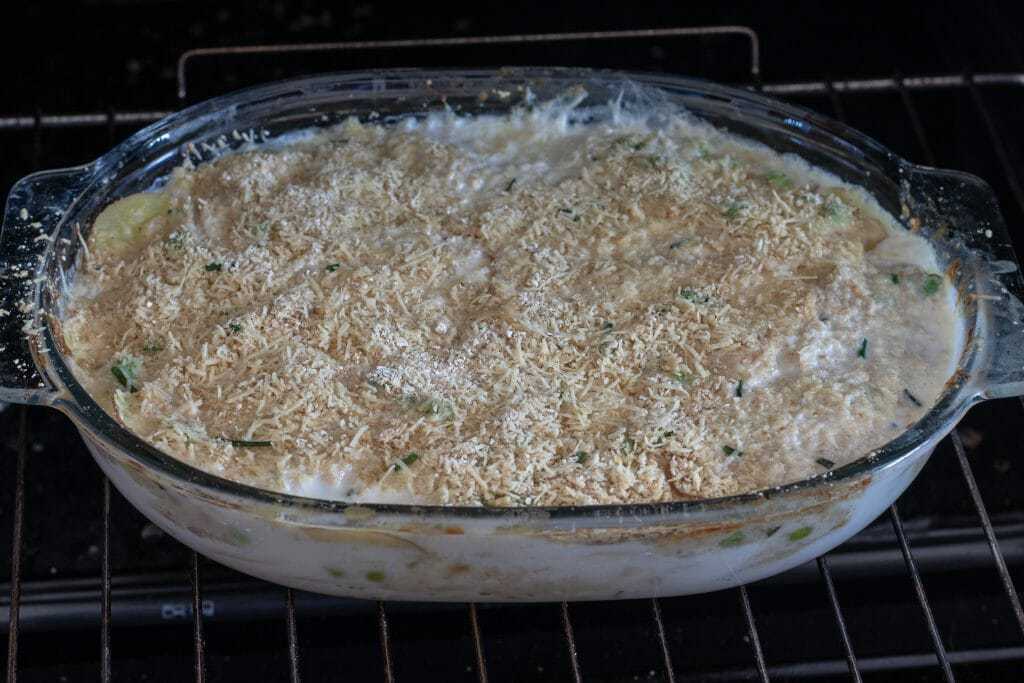 A bite of this blending of change of seasons comfort foods is destined to become a favorite at home. It can easily be changed up seasonally by swapping out chives for dill, tarragon, or even rosemary. Go ahead and give broccoli a chance instead of peas for a heartier version as well!