Chicken is easily one of the easiest and widely available meat proteins out there. Roasting, grilling, barbecue, and shredding it into pieces to add to a multitude of dishes can be absolutely great, but after a few times, it often can feel a bit redundant with the same old recipes to work from. That’s when it’s appropriate to look to outside inspiration once in a while. One such preparation would be in the form of a korma, a mild yogurt sauced curry that can be easily adapted to many levels of heat!

This curry can knock your socks off spicy or tamed down to just use a beautiful combination of flavors that involve absolutely no chilies if so desired, though not necessarily recommended because even the hint of heat can intensify the flavor.

Yogurt as the medium for marinating the chicken in this recipe. Some spices are added to this step as well to allow them time to seep into the chicken before cooking. After, coconut cream and more spices like cinnamon and cloves are used to make the sauce, which gives more the idea of sweet, than actually adding any sugar or honey to the mix. It winds up being savory with a hint of sweet that is not even present!

One of the best parts? This chicken has very little active time. It’s mostly marinating and simmering in the rich creamy liquid until ready to serve. 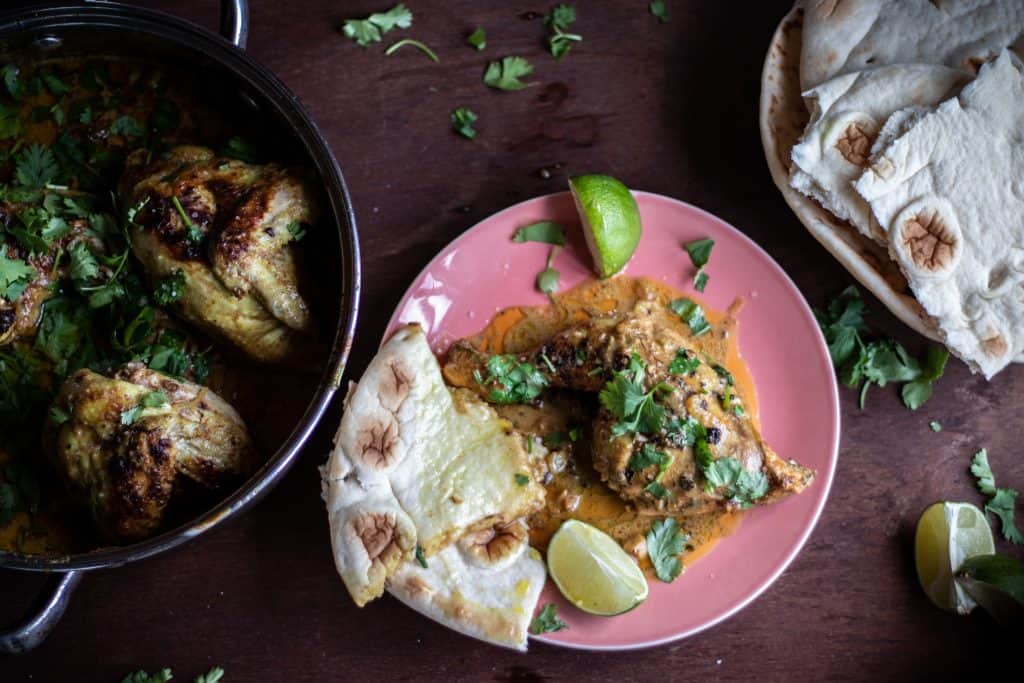 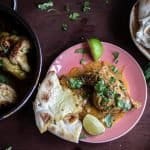 This recipe uses a whole chicken, but can easily be adapted to your favorite cut of chicken or you can use cubed chicken breast. Either use 4 of each cut or weigh it out to about 2 pounds.

STEP ONE – PREPARE THE CHICKEN

Lay the chicken on a cutting board and remove any giblets that may be in the cavity of the chicken. With a sharp chef’s knife, cut the chicken into quarters; two breasts with wings attached, two hindquarters. Transfer the chicken to a bag that can be resealed. Place in a bowl to prevent any mess if the bag has a leak. 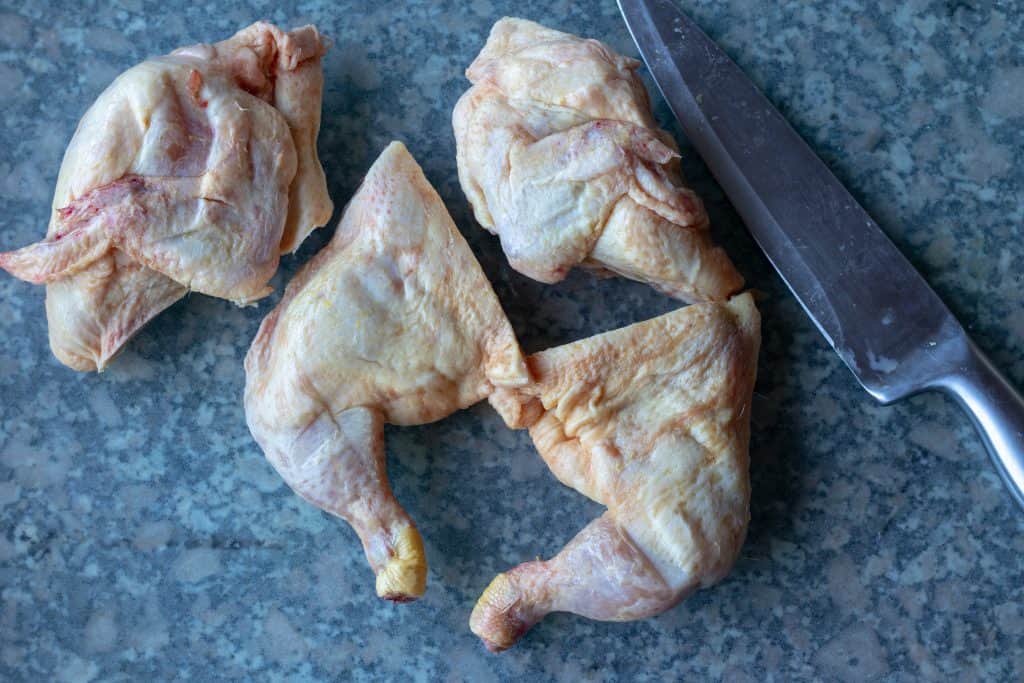 Scoop the yogurt into the bag with the chicken. Add in ground spices and bay leaves to the bag before sealing it. 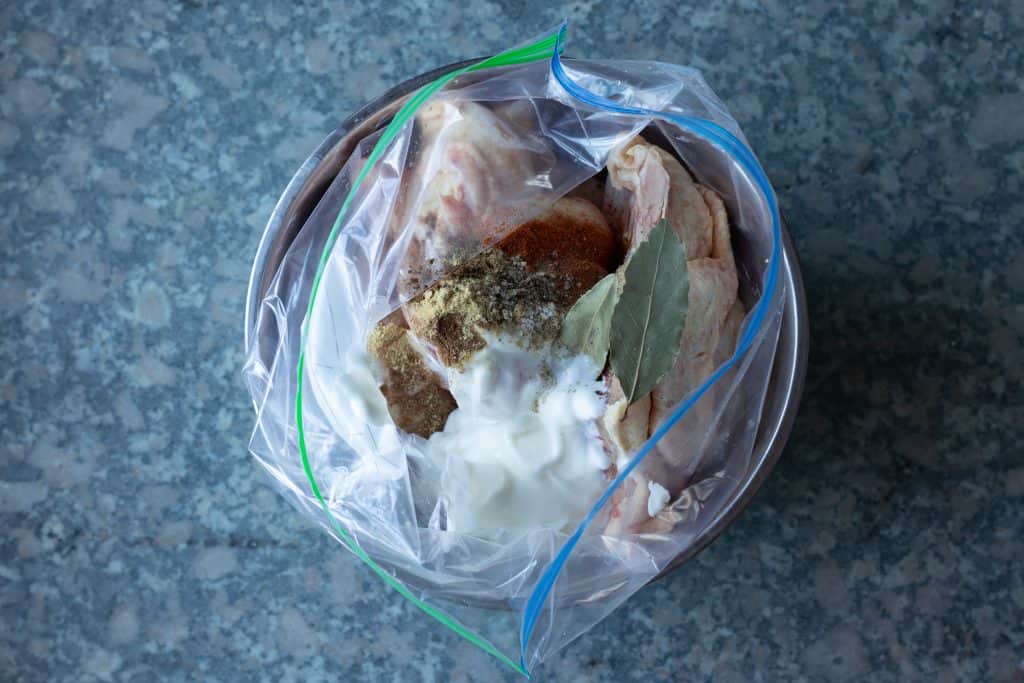 Turn the bag in your hands to help massage the marinade into the chicken and to help it completely cover each piece. Refrigerate for at least 1 hour before cooking or overnight for even more flavor infusion. 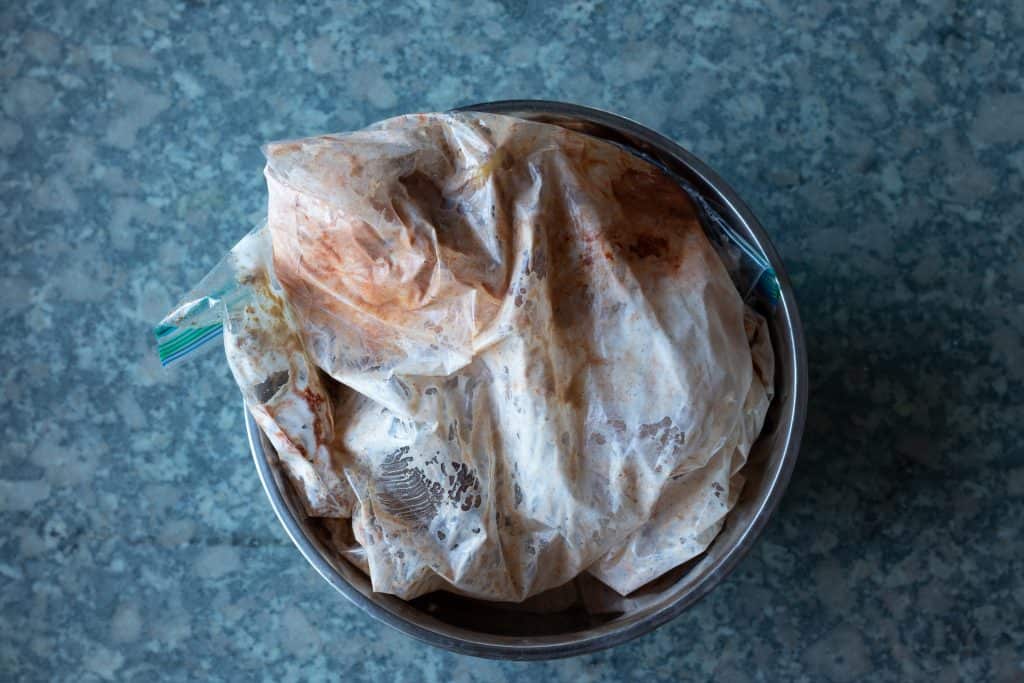 With a paring knife, carefully peel the ginger and turmeric then peel and cut off the root end of the garlic cloves. 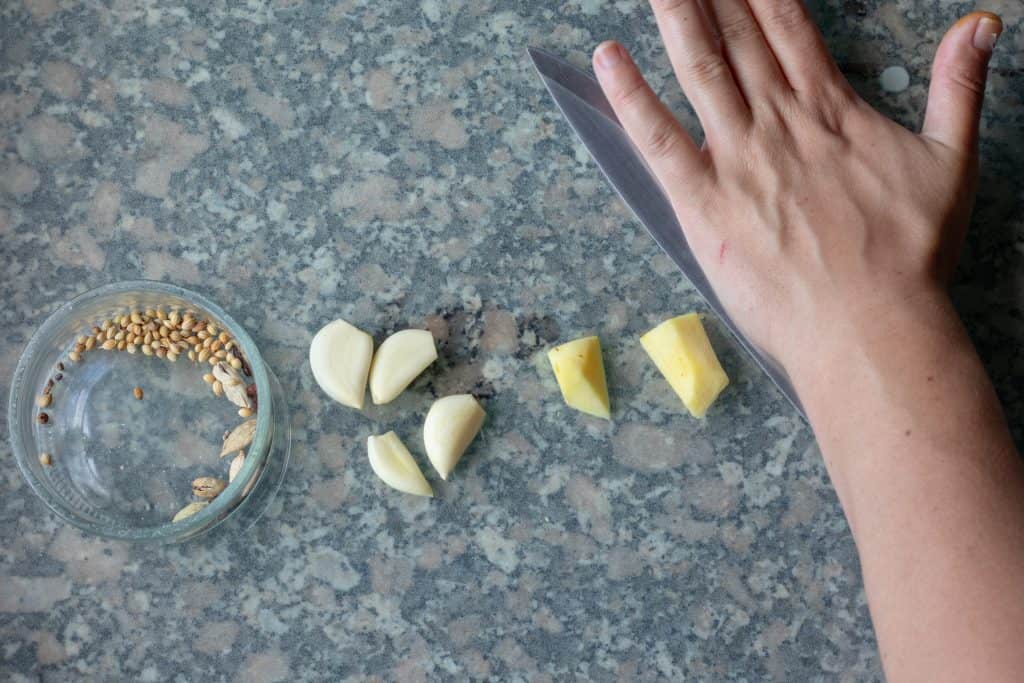 Using the flat side of a chef’s knife or another heavy object, crush the ginger and turmeric to help the flavor to seep into the sauce better as it cooks and be easier to discard when done. 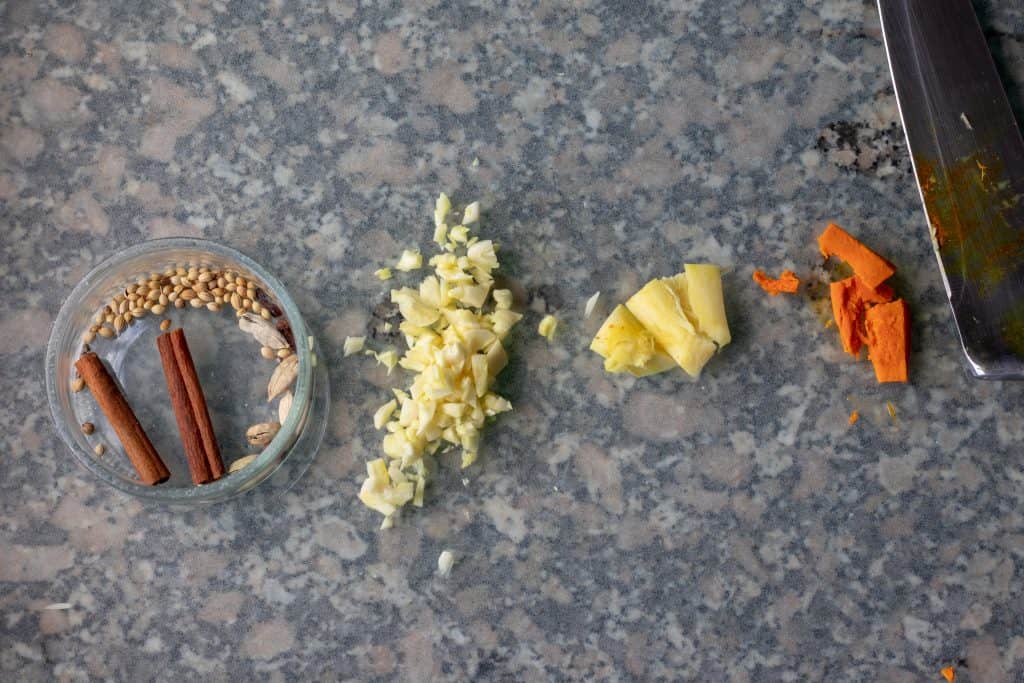 Chop the garlic cloves into small pieces and slice the onions. 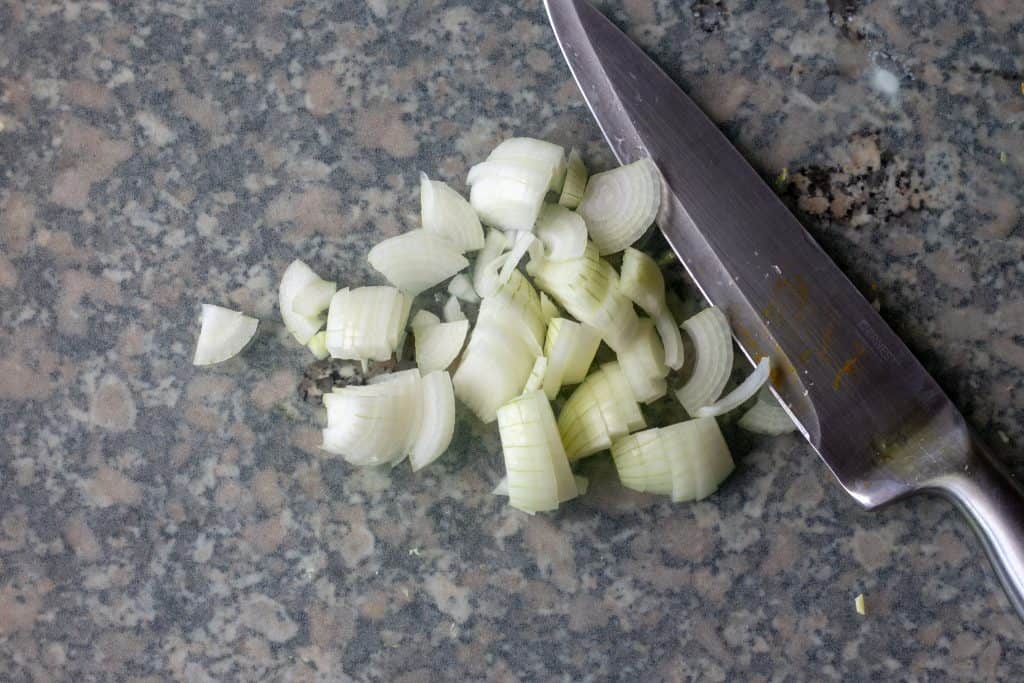 Cut the cilantro stems and about a ¼ inch into the leaves off from the rest of the cilantro. Cut the stem portion into small pieces and roughly chop the leaves. Cut one lime in half and cut the other into quarters. Set the quartered lime and cilantro leaves to the side. 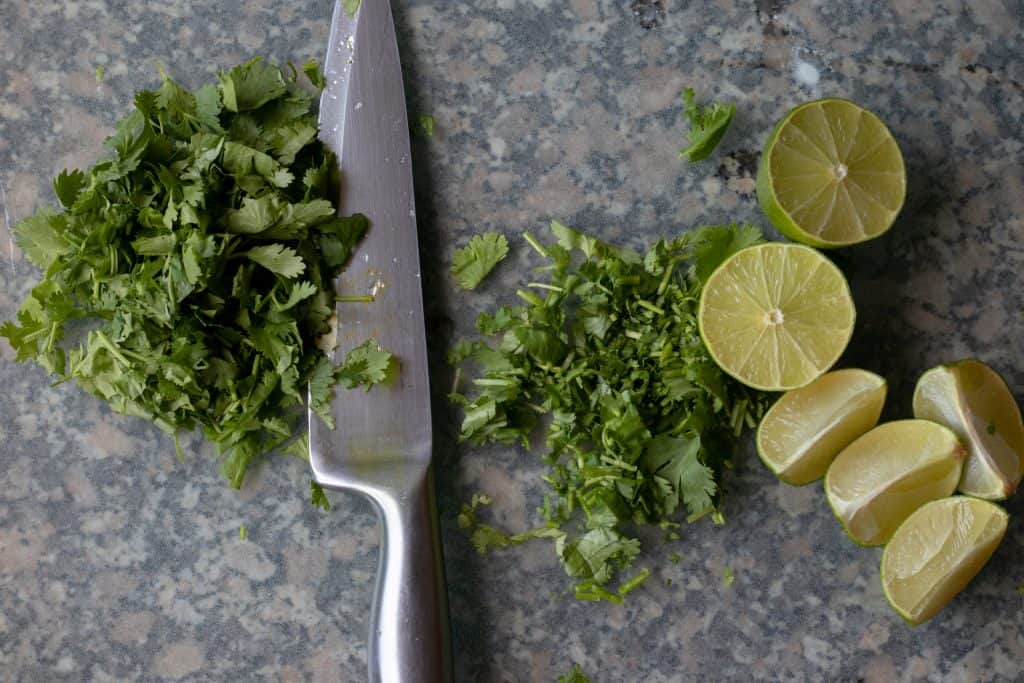 STEP FIVE – MAKE THE FLAVOR BASE

Melt the ghee in a deep pan such as a saute pan or braising pan. Once the ghee has melted at least halfway, add in the cardamom pods, cinnamon sticks, cloves, and coriander seeds. Let them cook in the ghee for about 2 minutes or until very fragrant but not burnt. 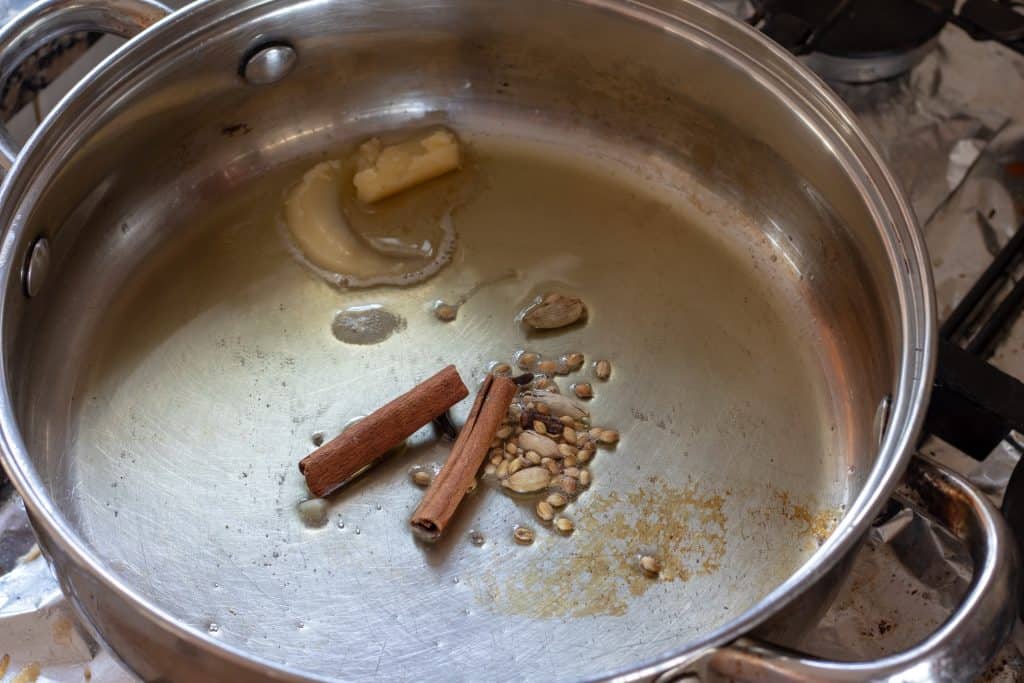 Toss in the onion, ginger, turmeric, and garlic and stir well. Let them cook for a few minutes until the onion has become soft and starting to turn translucent. 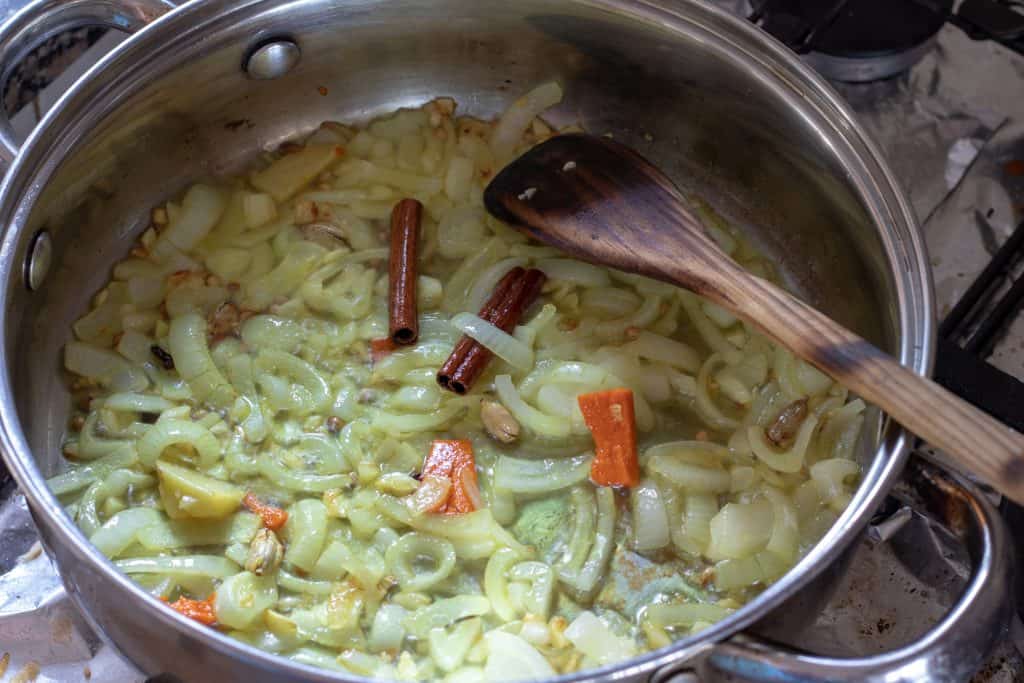 Lay the chicken into the pan with the skin side down. Add the cilantro stems and let the chicken cook until the skin has started to brown. 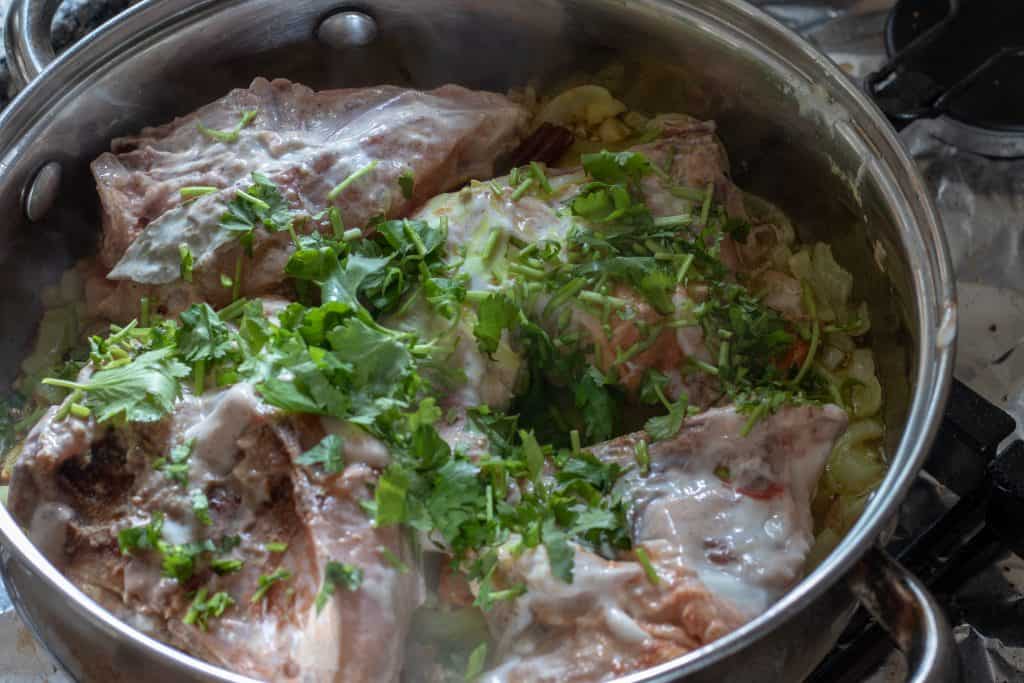 Add the coconut milk and cream to the pan, stirring with a wooden spoon to mix it in with the seasoning and remove any stuck bits from the bottom of the pan. 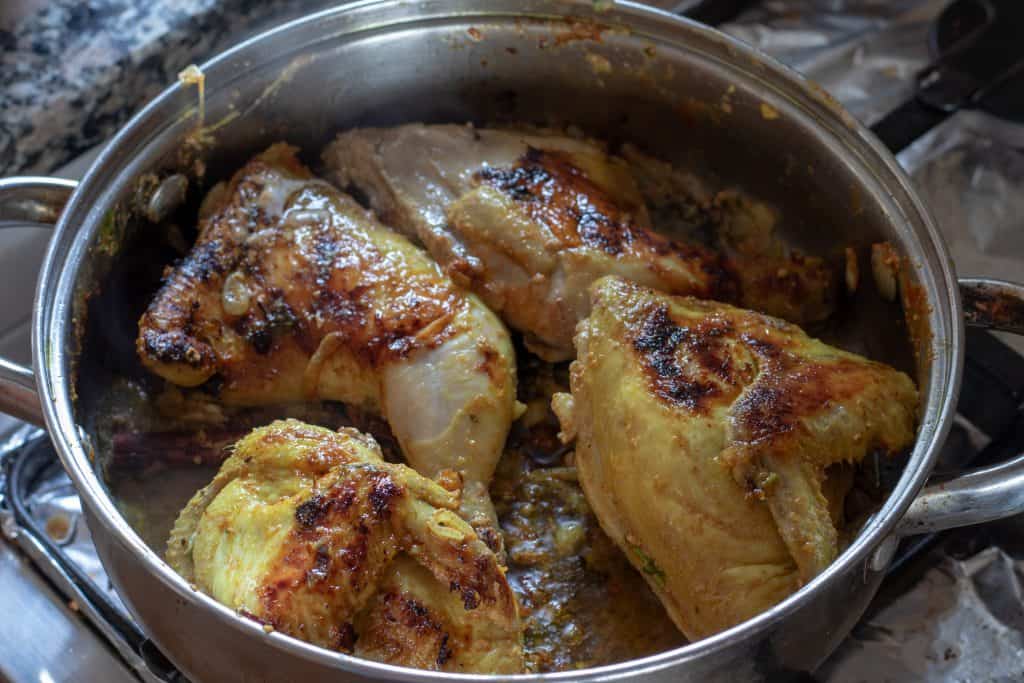 Turn the chicken over in the milk a few times to coat it with the milk before leaving it skin side up in the pan. Cover the pan, reduce the heat, and let the chicken cook for about 20 minutes. 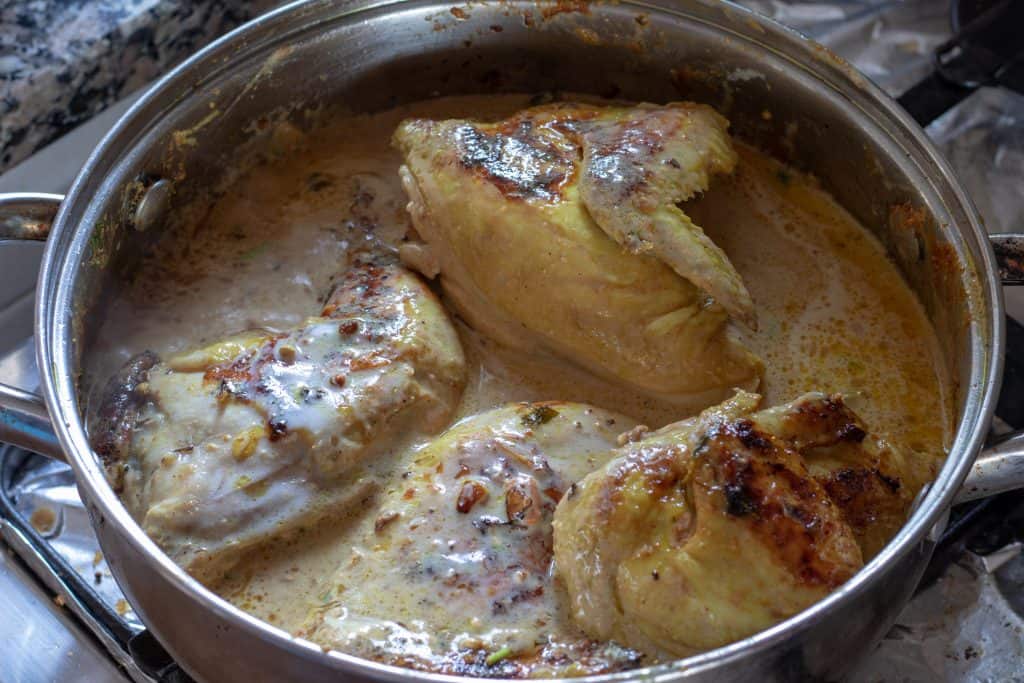 Take the lid off of the pan and stir the sauce. Let the chicken and sauce cook about 10 more minutes in order to let it thicken and the chicken to finish cooking. 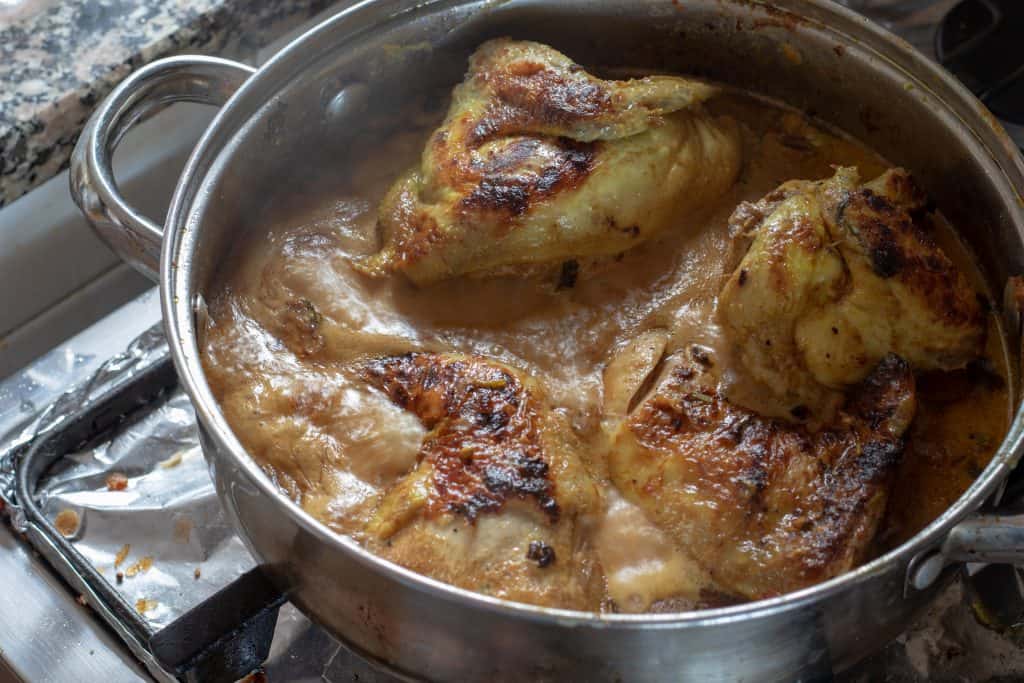 Add the cilantro to the pan and squeeze the lime halves into the pan over the chicken. Serve with lime wedges on the side and any leftover cilantro leaves. 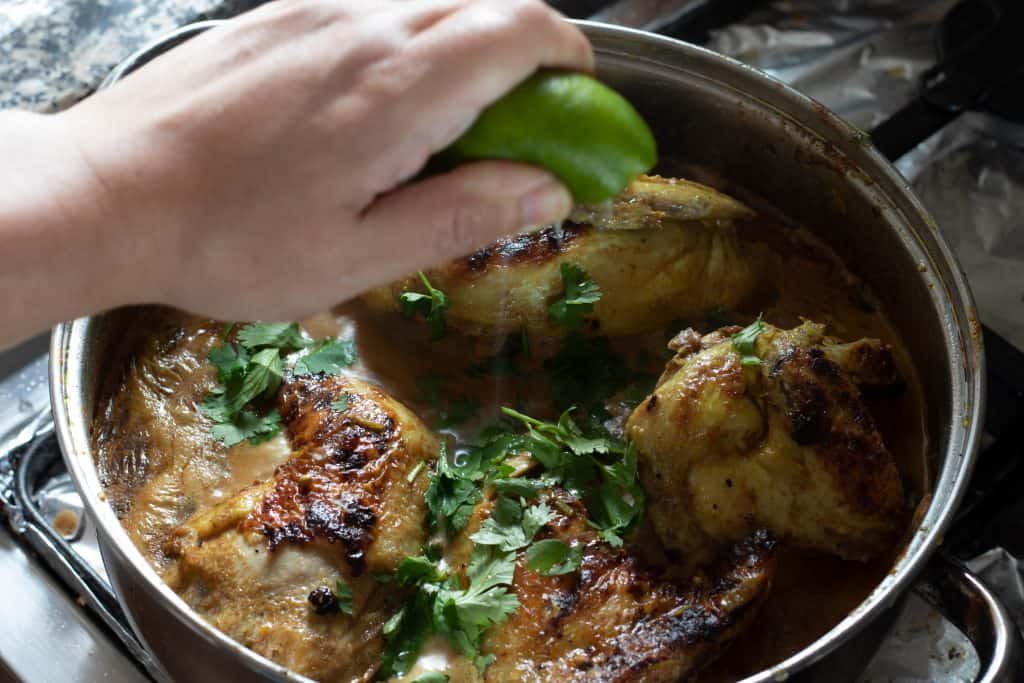 This recipe for chicken korma is a keeper for anyone needing a change in the dinner department, and requires no more effort, nor ingredients, than what can be easily found in the local grocery store!

What do you like to pair with your chicken korma? Warm naan bread or steamed jasmine rice? A delicious dal, or some vegetables would work perfectly as well! 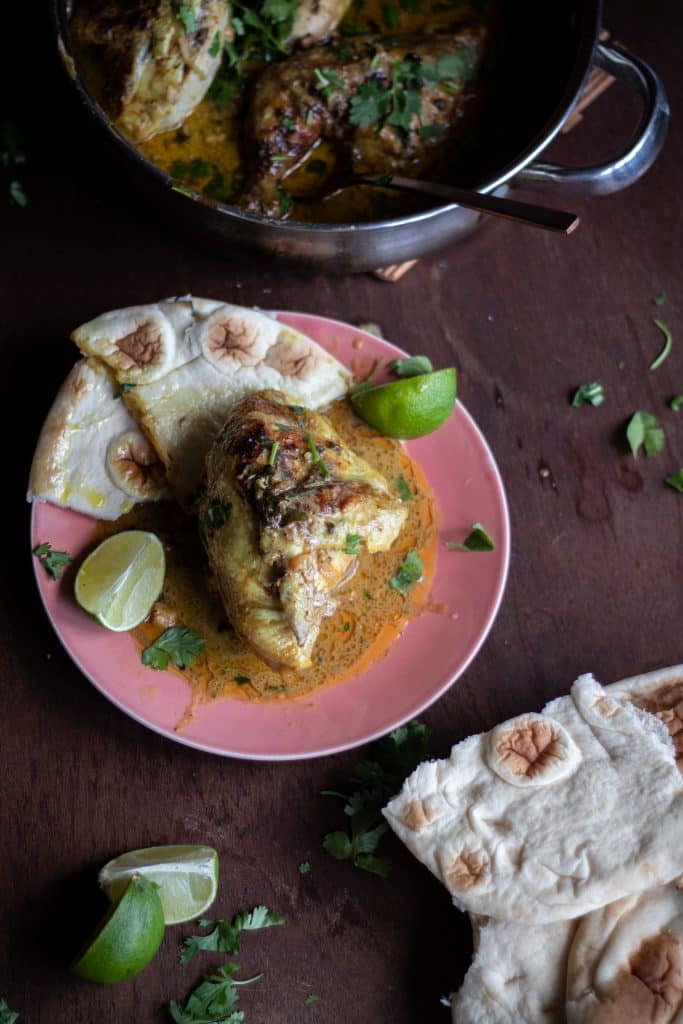