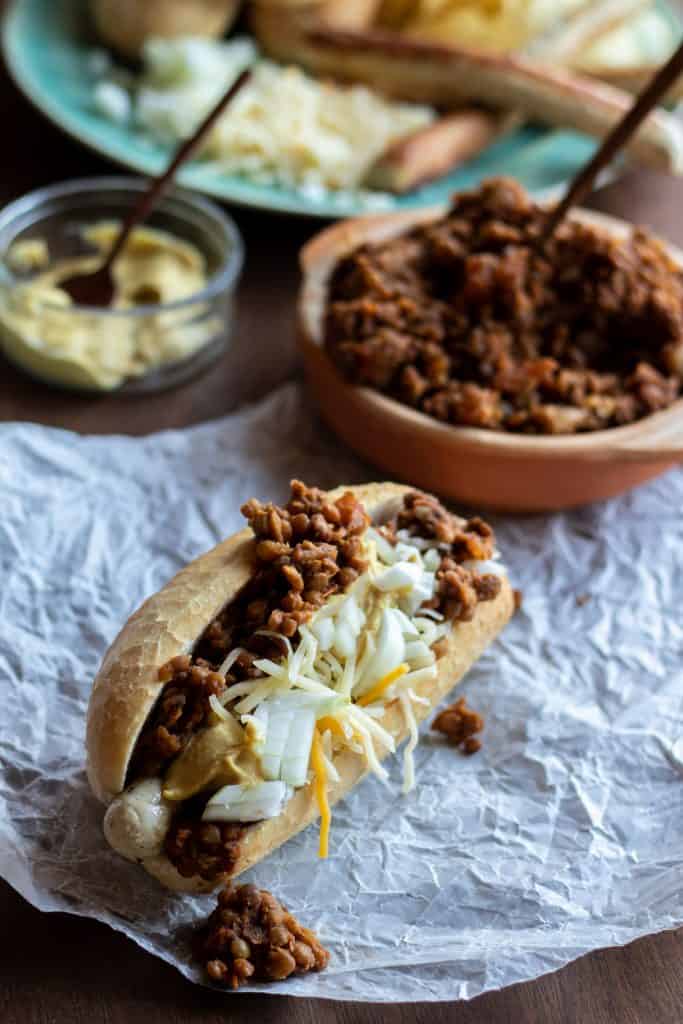 Not much else embodies America’s summer like a hot dog. Probably one of the best known is the Coney Island hot dog, a dog that’s been smothered in a lightly sweet, tangy, and most definitely savory meat sauce that’s then topped with cheese, onions, and a bit of mustard. But what if you’re looking to go more vegetable based? Does that mean you can’t enjoy a good old fashioned dog? Absolutely not, and that’s where this vegan lentil chili comes in.

This chili isn’t just for Coney Island dogs, but that’s what it was made for. It can be used for anything you would substitute meat rich sauces for pasta to sandwiches. And it takes barely any effort to throw it together and let it cook down. All that’s required is a slow cooker, the ingredients, and a whole lot of waiting time.

You see, this recipe is versatile as well as beautiful in its simplicity. It uses Greek-inspired flavors that can be found in the original meat recipe, most specifically with the herbs. This works so well to give it the oomph required to be accepted, if not heartily enjoyed, by meat enthusiasts.

For the lentils, this recipe uses the classic whole brown variety. These are ideal because they have the ability to stay intact when cooked for long periods of time, rather than turning to mush. This texture, paired with diced tomatoes, onions, and garlic really gives this vegan chili a lovely “meaty” mouthfeel.

When all of that has slowly cooked down into a thick chili, there is always the decision of how to serve it. Of course in this recipe, the decision has already been made and it’s delicious. Vegetarian sausages fill these buns, whatever is your favorite of course, before being smeared in a heavy layer down the middle and topped by fresh diced onions, shredded cheese, and a deeply flavorful Dijon mustard.

Mouthwatering for sure, so what are you waiting for? 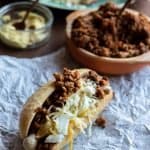 STEP ONE – PREPARE THE VEGETABLES AND HERBS

On a cutting board, cut the stems off the tomatoes and peel the onion. Dice both before peeling and mincing the garlic. 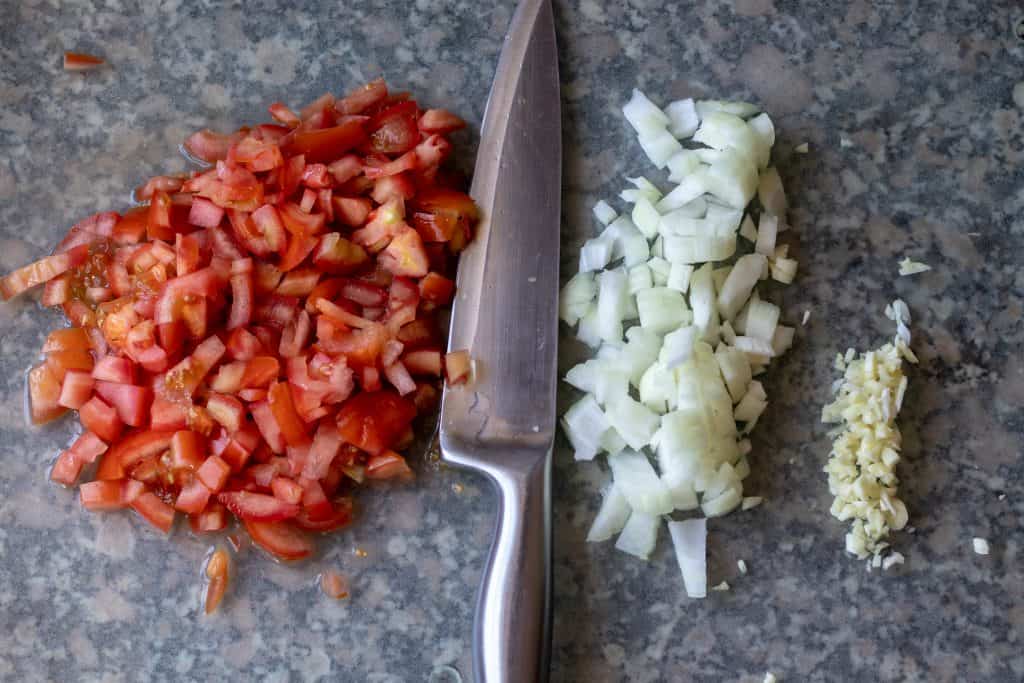 Rinse the herbs under cool water and mince the dill, remove the stems from the oregano and mince, and remove the leaves from the thyme sprigs. 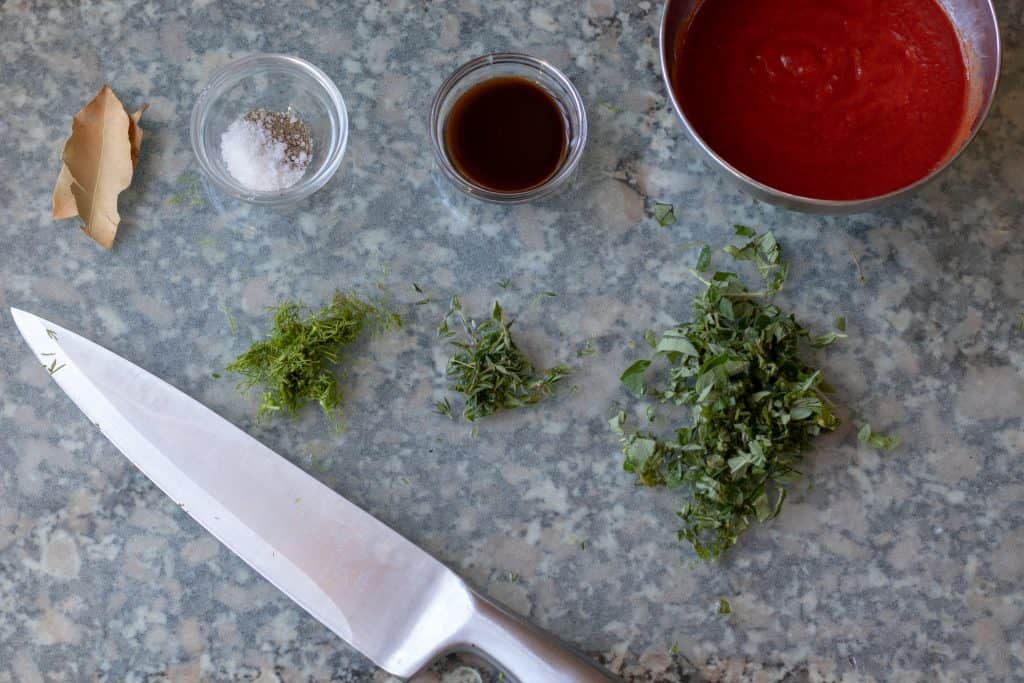 Place the lentils in a strainer and run cool water over them to rinse them thoroughly before picking them over to make sure they are completely free of debris. 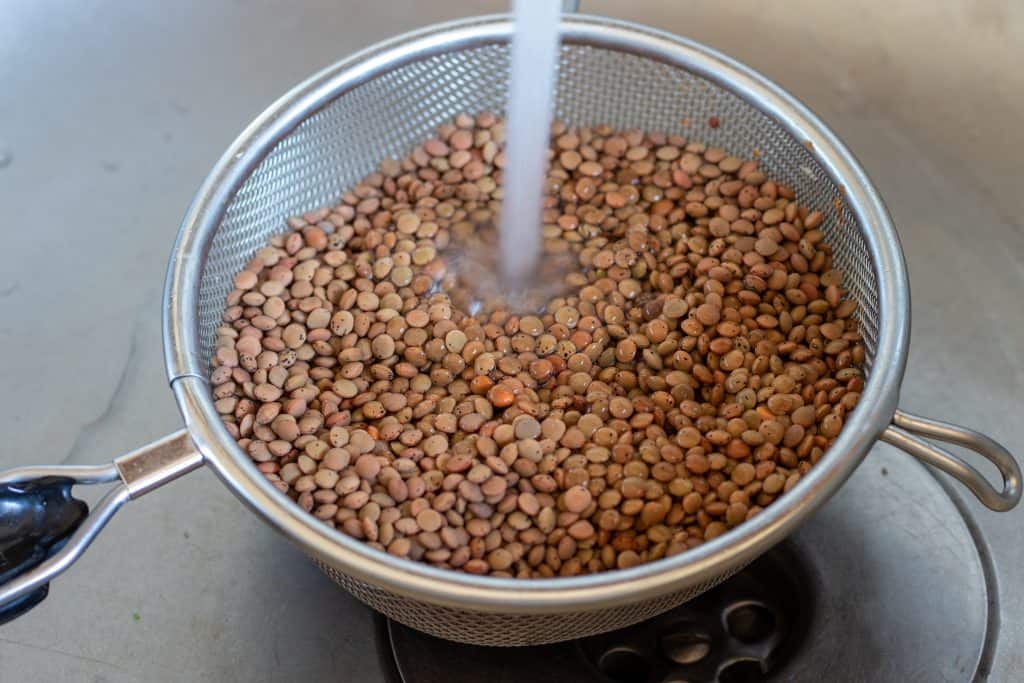 Transfer the cleaned lentils into a slow cooker along with the tomatoes, onions, garlic, herbs, Worcestershire sauce, and tomato puree. Pour in the beer and broth and add the bay leaves, salt and black pepper. 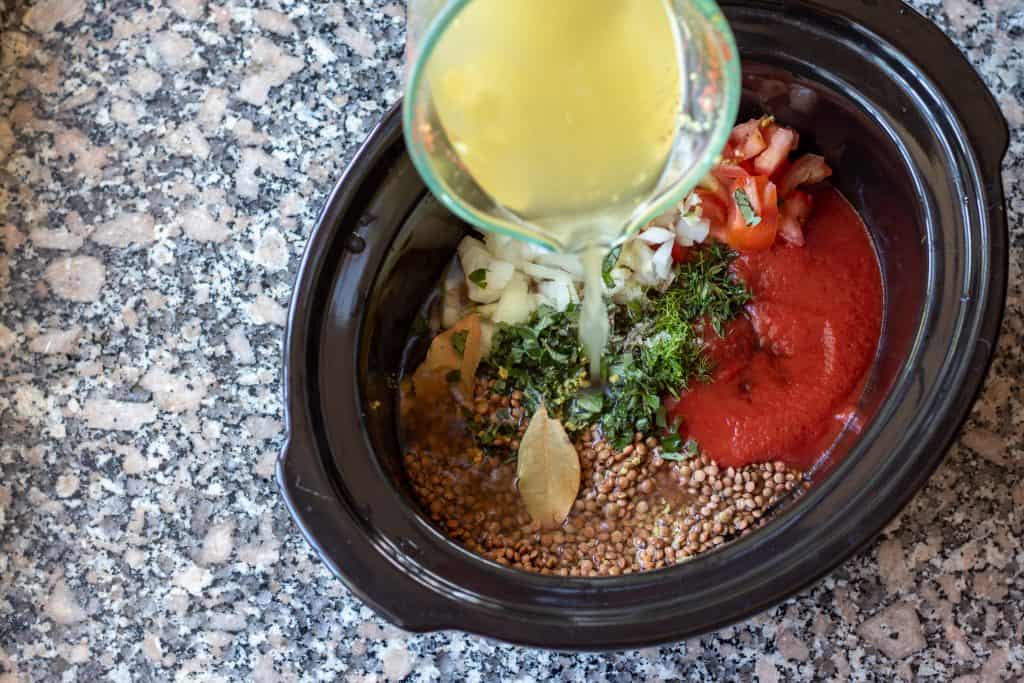 STEP FOUR – COOK THE LENTILS IN THE SLOW COOKER

Place the container for the slow cooker back into its base and turn it on high. 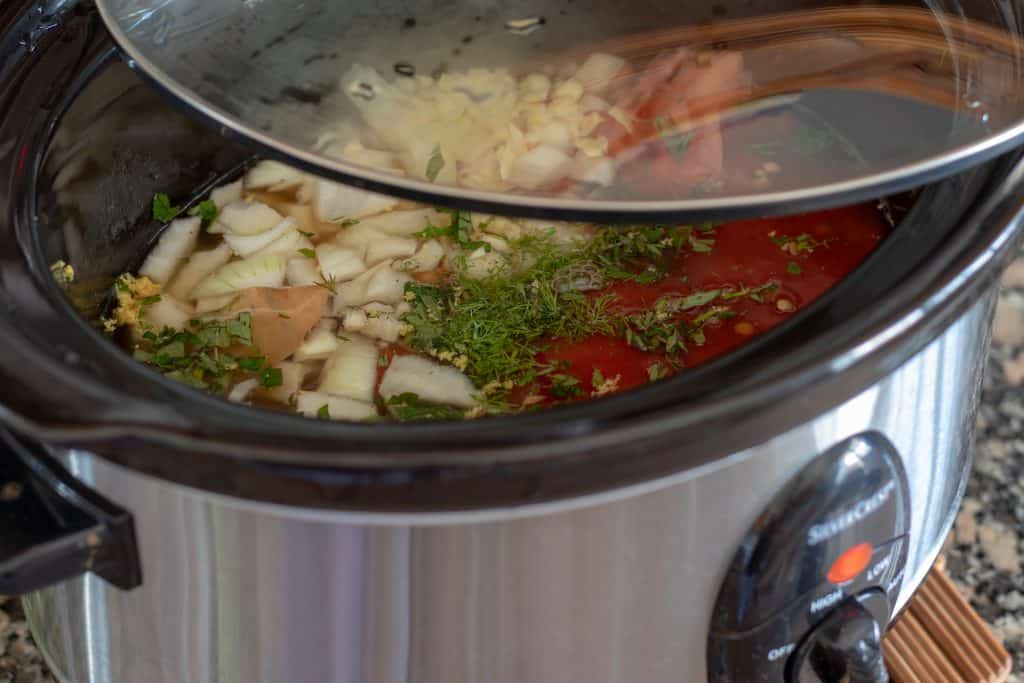 Let the lentils and everything cook down for a few hours until they have absorbed much of the liquid and become thick and tender, but not mushy. If they start to become dry add a little more water. Turn off the lentils when they are cooked and extend cooking time to 8-12 hours if using low heat. 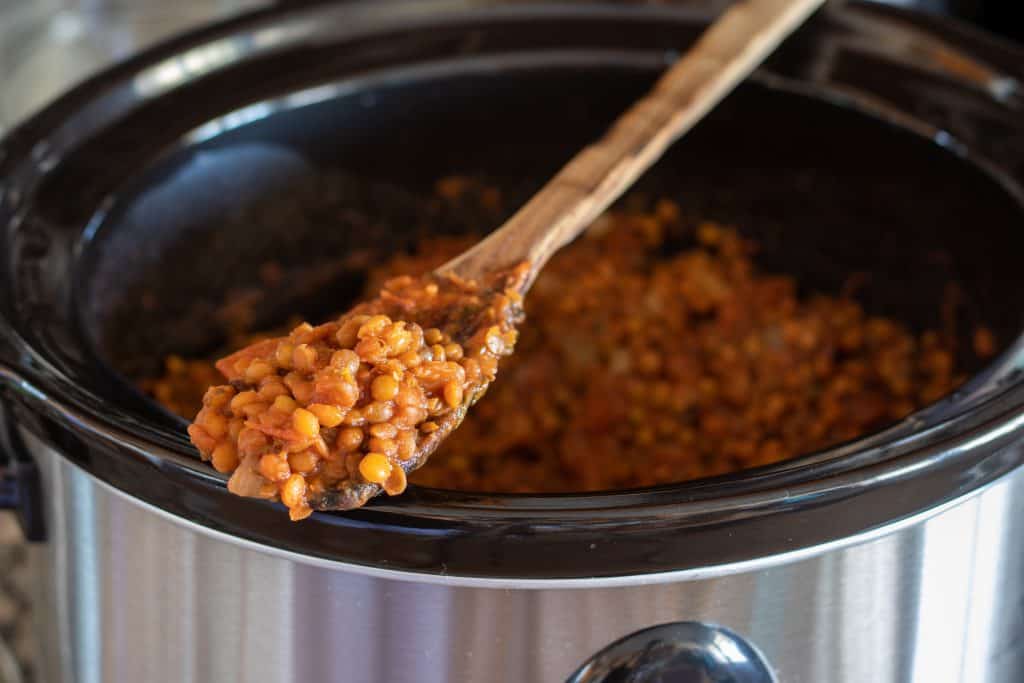 Once the lentils have finished cooking prepare the vegetarian sausages by pouring the olive oil into a large saute pan and turning the heat on to medium-high. Add the sausages in a single layer to the pan, turning them as they cook so they can brown on all sides. 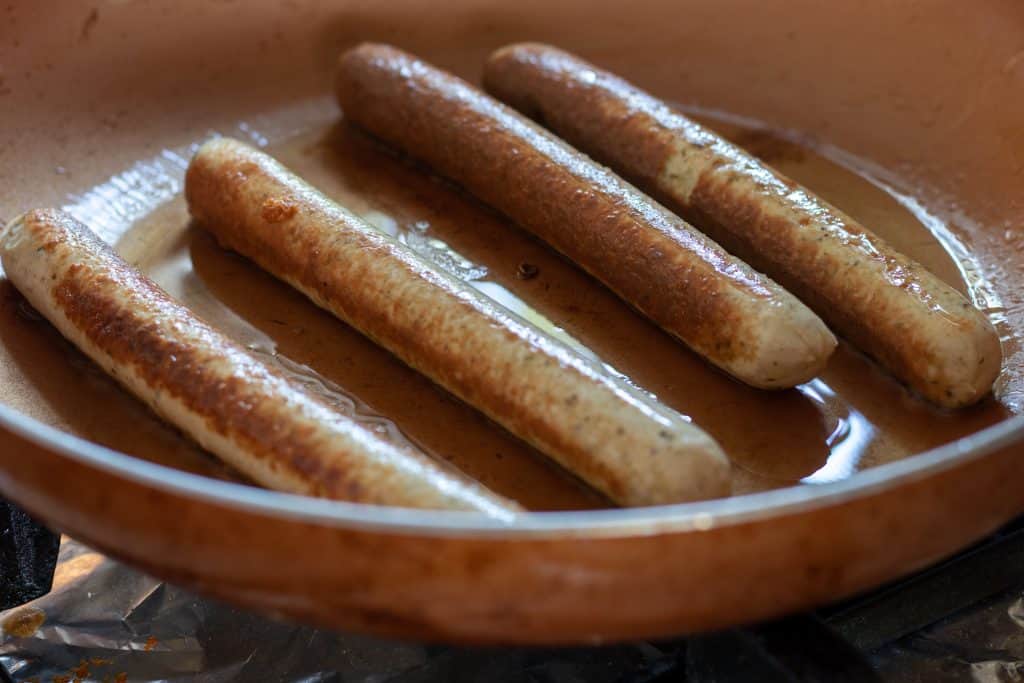 Cut the bread for the sausages down the side of the middle length wise and open them up like a book, leaving one side intact. Set them aside. 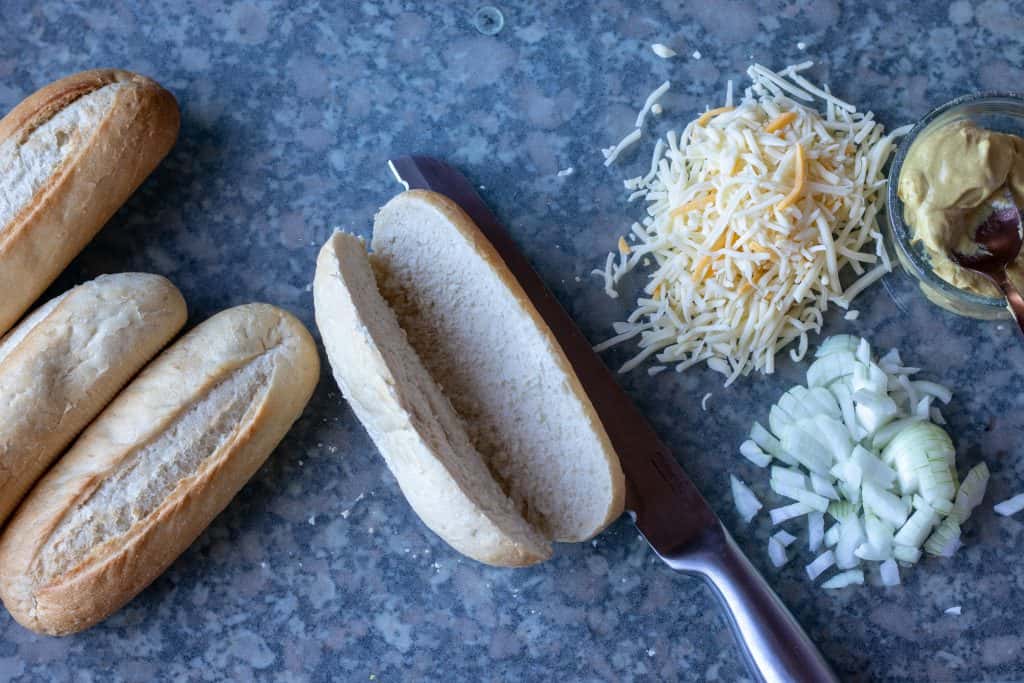 STEP SEVEN – PUT THE SAUSAGES IN THE ROLLS

With a butter knife, spread mayonnaise on the inside of each hoagie roll and transfer the cooked sausages to the buns. Spoon the lentil chili onto each sausage, spreading it from end to end. 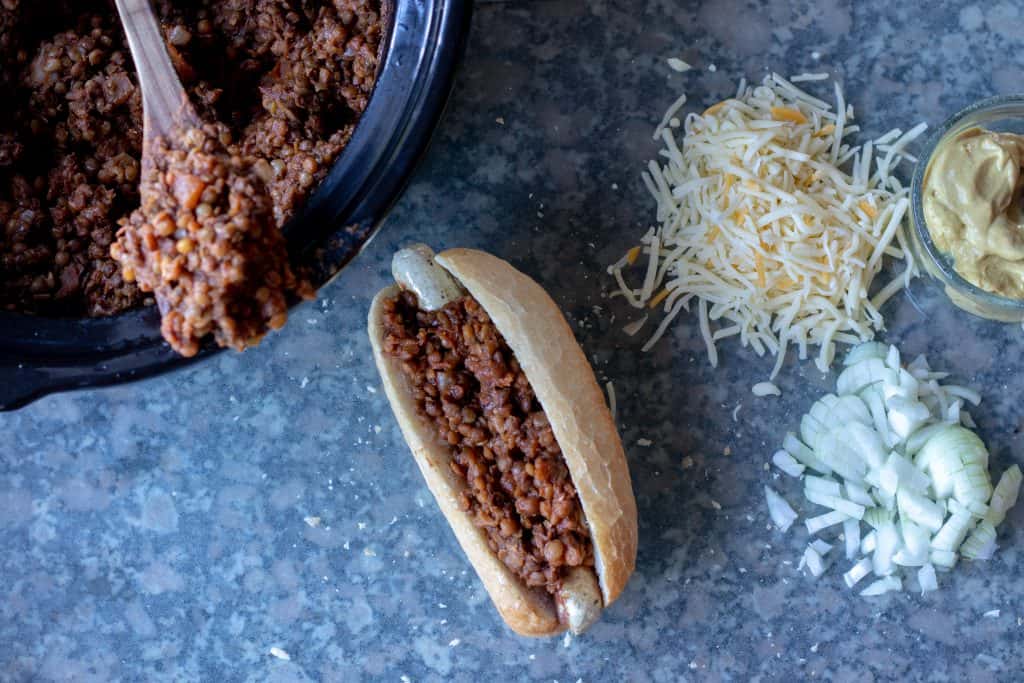 Sprinkle the shredded cheese on top of each and add a bit of diced onions on top. Spoon some Dijon mustard if desired. 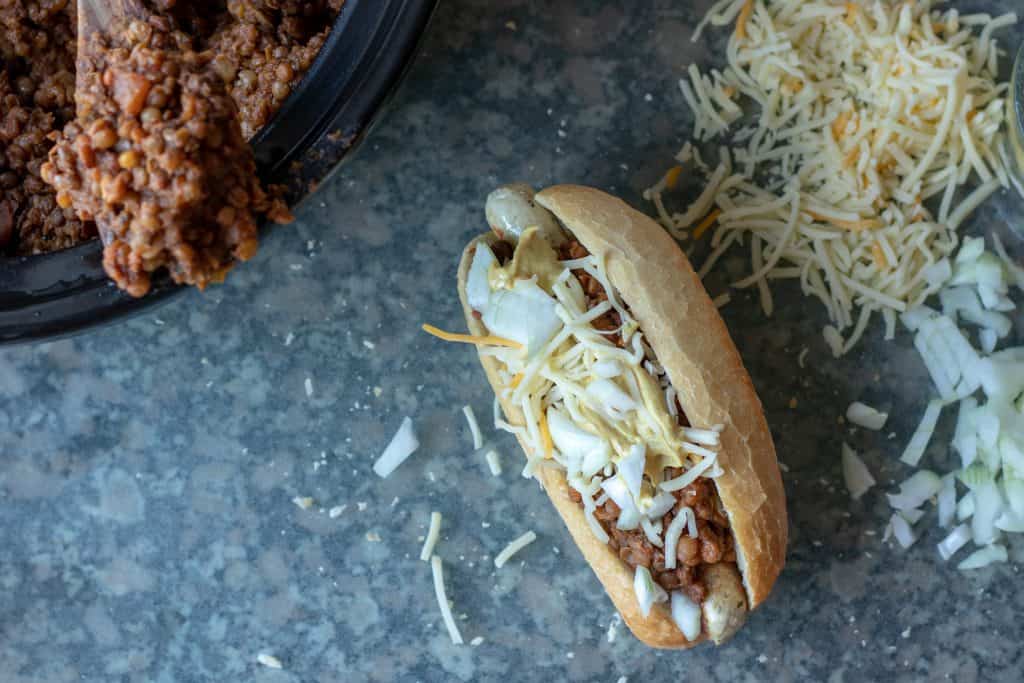 This slow cooker lentil chili isn’t just for Coney Island hot dogs. It can be turned into a healthy sloppy joe, added to spaghetti to make a Cincinnati chili, or just add some freshly chopped onions, a sprinkle of shredded cheese, some salsa, and maybe a dollop of guac for your very own vegetarian chili bowl! 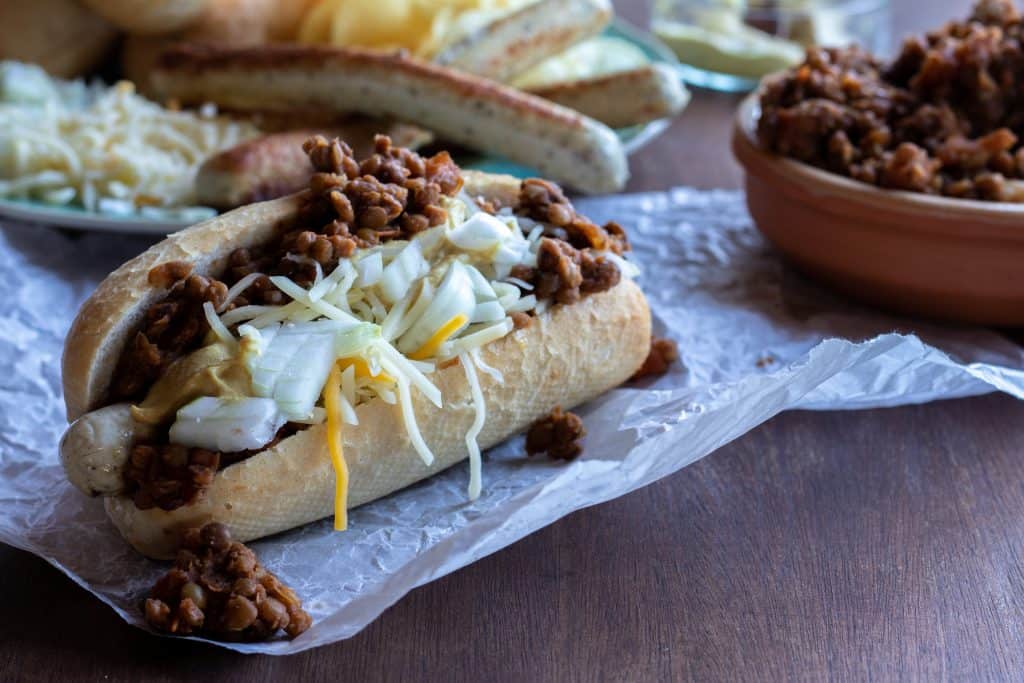