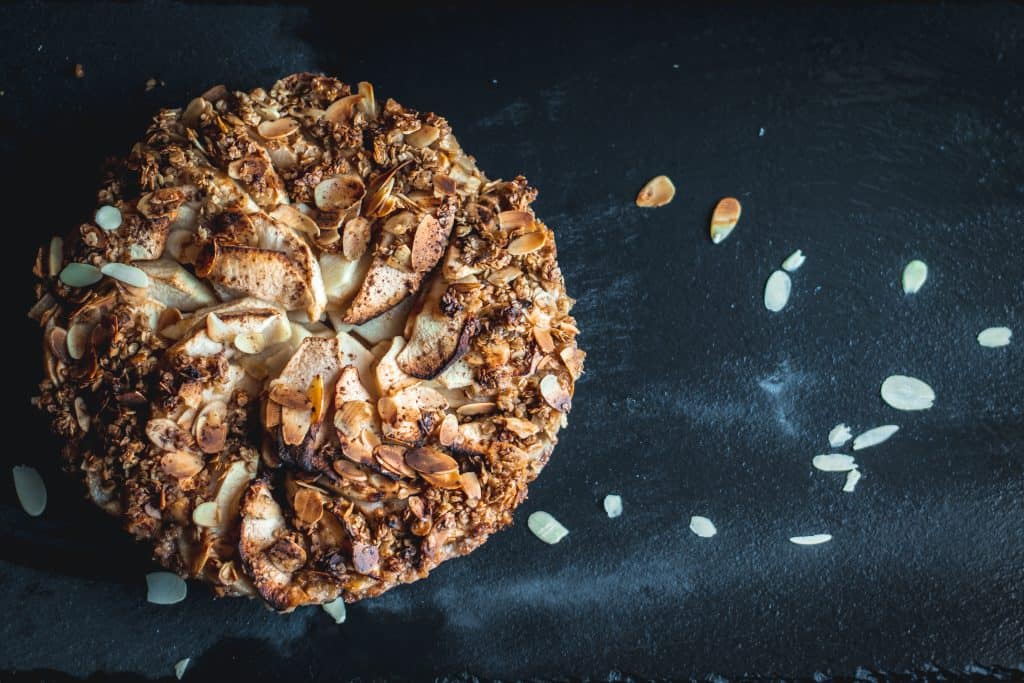 Apple pie is known for its syrupy sweet flavor, a flaky crust, with a good bite to the slices of the fruit held within. These three things are what often pop into one’s mind when the saying “As American as apple pie” is uttered. Maybe with a little red, white, and blue flag to go with it! But only one of those things must be involved for apple pie to be delicious, and that has solely to do with the apples chosen!

You see, apple pie doesn’t have to be glued together with a thick gelatinous glue of syrup. Just a little does the trick, I promise! A thin syrup made from the leftover apple peel, a stick of cinnamon, and ginger is all you really need to give some sweetness while maintaining that apple flavor and texture.

Which brings us back to the apples. Apple pie needs apples that are firm and can hold their shape after being baked. A red delicious apple may be truly delicious, but it will fall apart in the cooking process. Best to leave them to healthy raw snacks. Pie needs something with substance, and that’s why I like the use of three specific types.

These apples are chosen firstly for their ability to stay intact when baked for a long period of time, and secondly for their unique flavors. Granny Smith apples are my favorite apples. Their tart flavor and firm texture make them a staple in my home for snacking. The next is pink lady apples, which have a less tart flavor, more sweet, but still crisp and crunchy and oh so good for cooking. Fuji is the third of my trifecta of apple pie goodness for their ability to lend any extra sweetness that the other two might lack. Thinly sliced and tossed into a pie crust, and you’ve got the making for the perfect apple pie.

Speaking of crust, how about something a little different to the original apple pie? Something that is healthier, something that is actually less likely to fail, and still pairs so well with the taste of apple is what I decided to go with in this pie. Oatmeal is spiced and pressed into a pie tin as well as turned into a crumble topping with thin slices of almonds to make this pie dutch influenced too!

This is apple pie may truly be as “American as apple pie” in that it takes tradition and transforms it into something new! 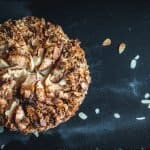 STEP ONE – PREHEAT THE OVEN AND MIX THE PIE CRUST

Turn the oven on to 375 F. Take a 9 inch pie tin or short cake pan and line it with aluminum foil. 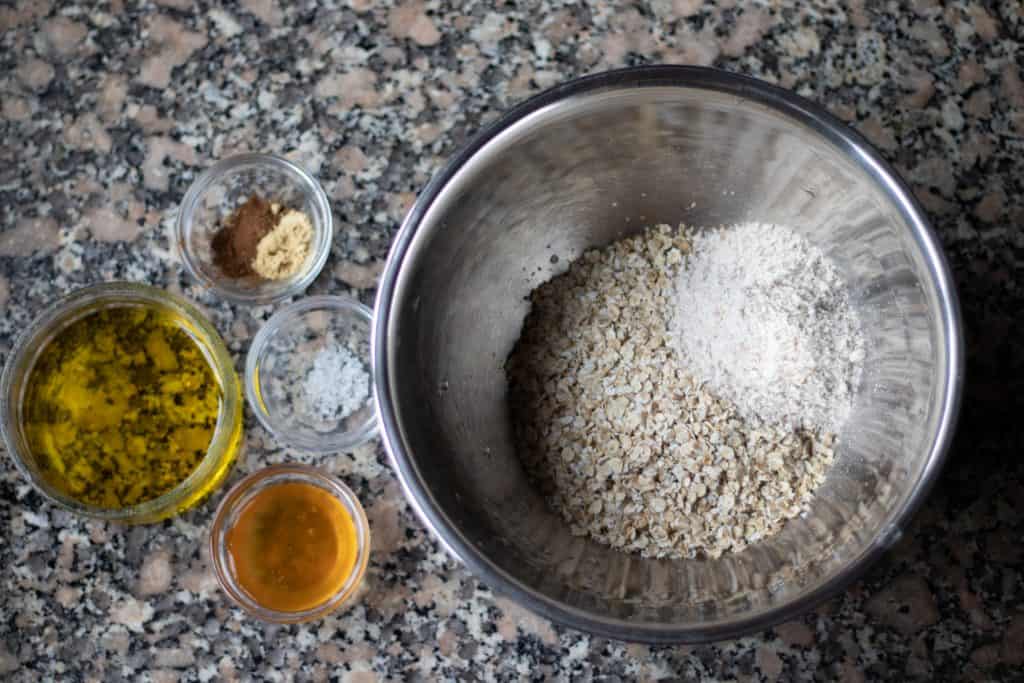 Pour the oatmeal, flour, ground ginger and cinnamon, and salt into a bowl. Add the honey and olive oil and stir well to distribute everything evenly and make a sticky, clumpy mixture. 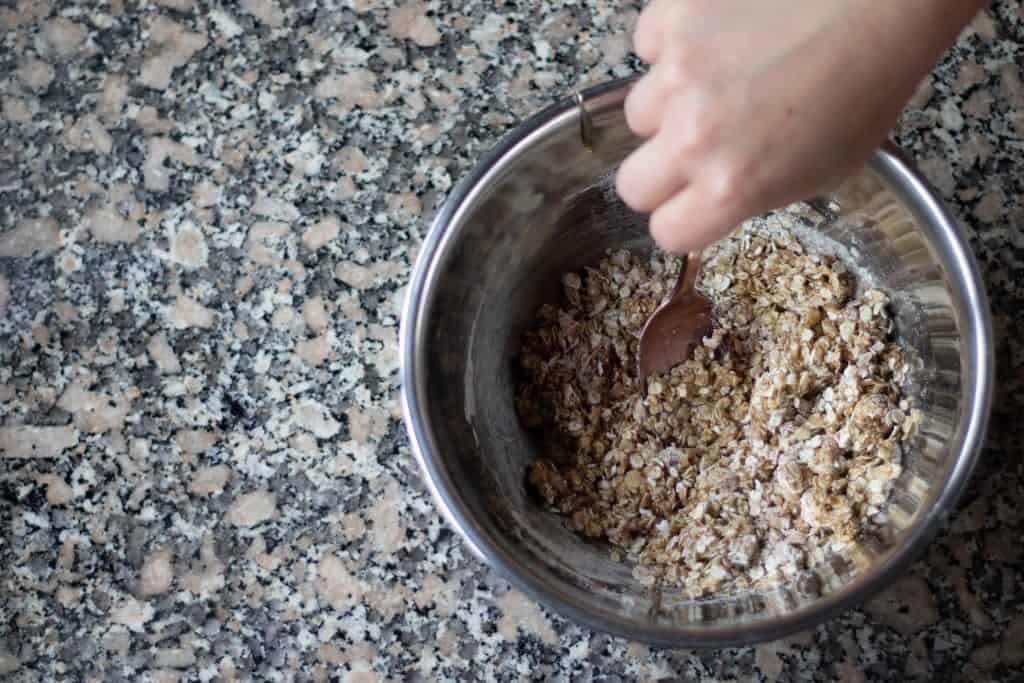 If it doesn’t clump well add a little more olive oil to the mix. 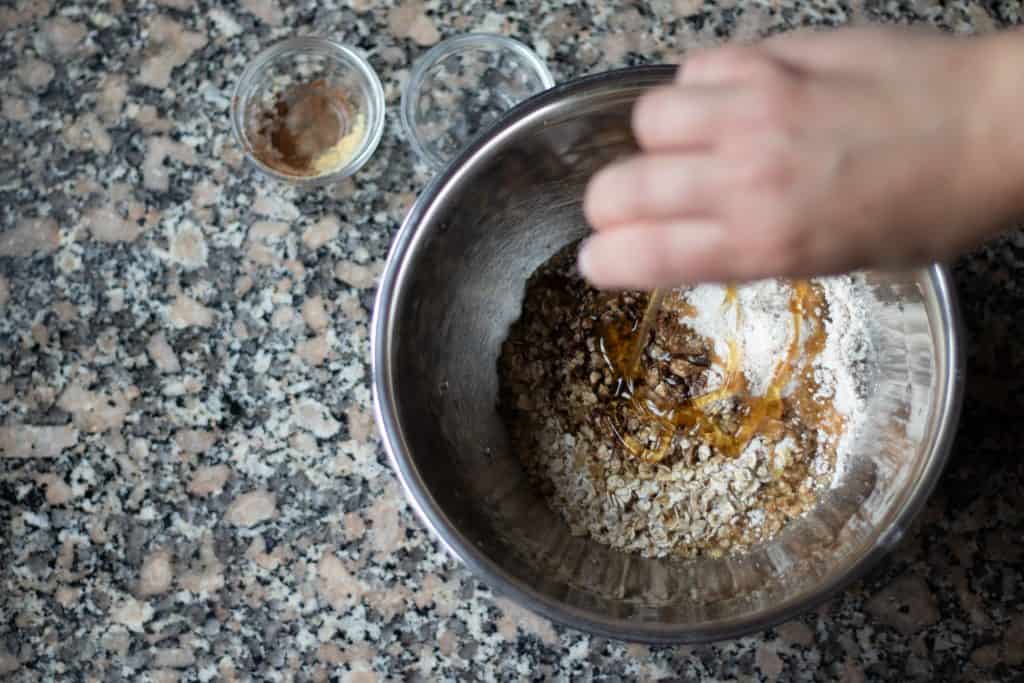 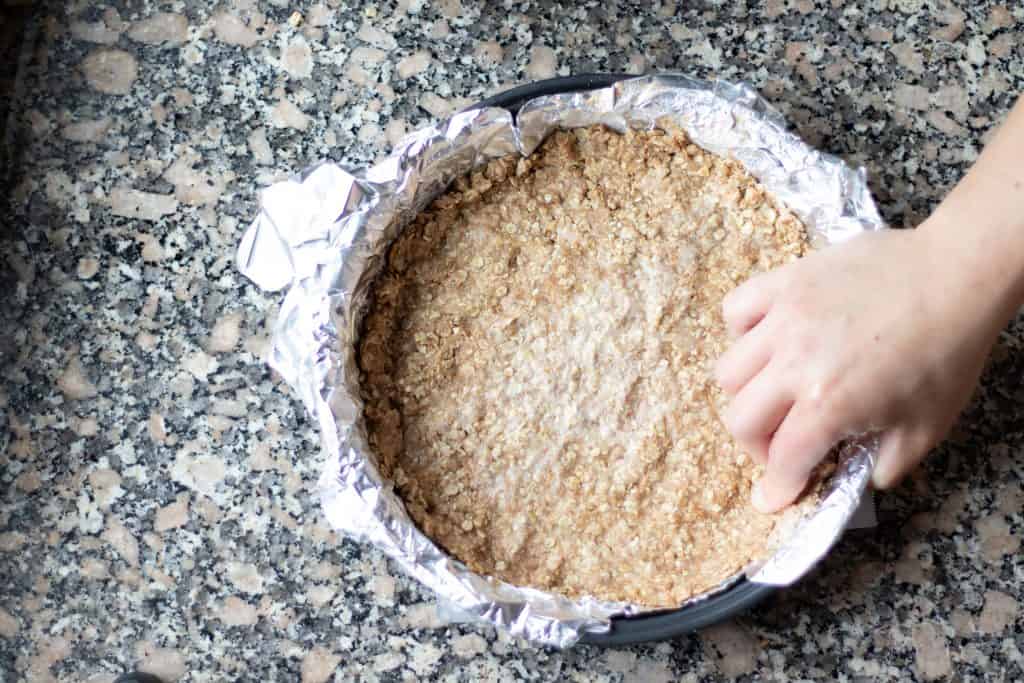 Bake the pie crust in the oven for 10-15 minutes. It’s done when the crust has become firm and very lightly browned around the edges. 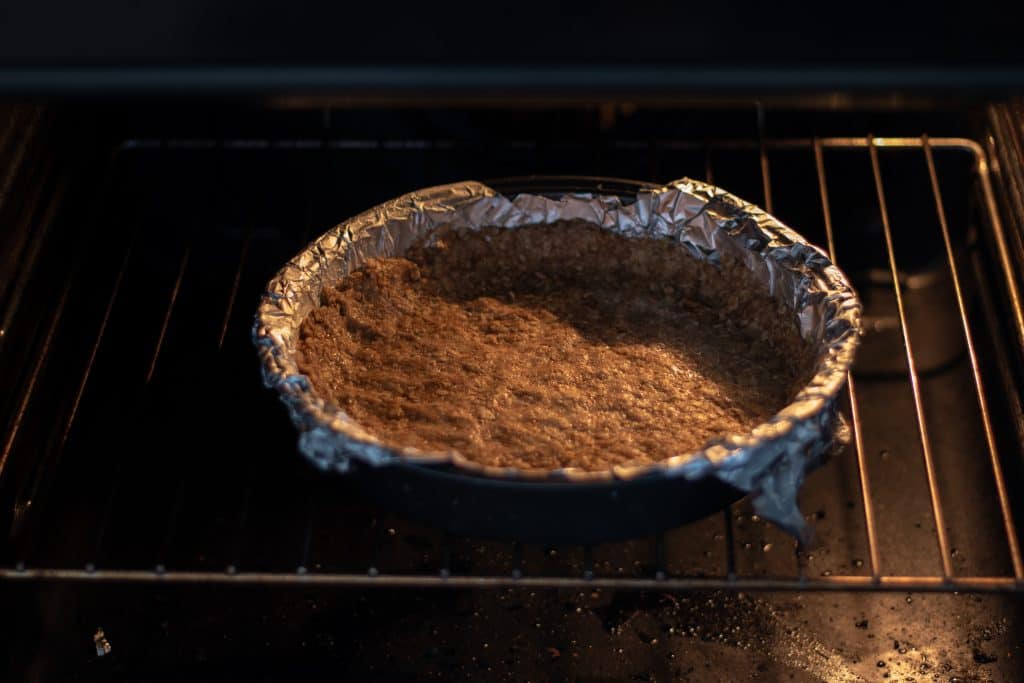 Turn off the heat and remove the pie crust from the oven to let it cool while making the filling. 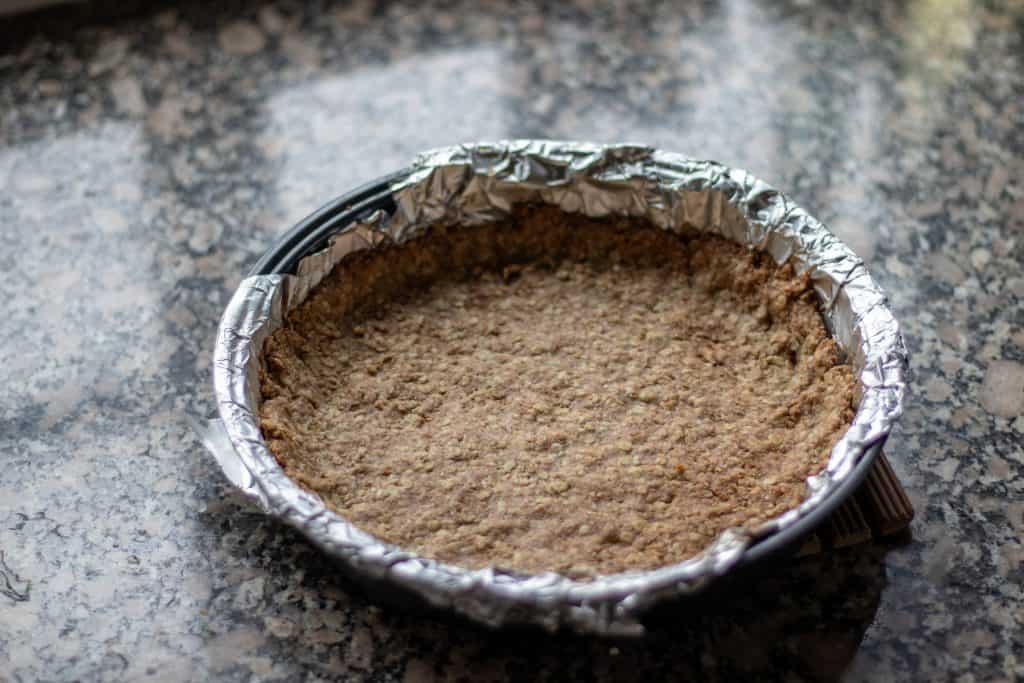 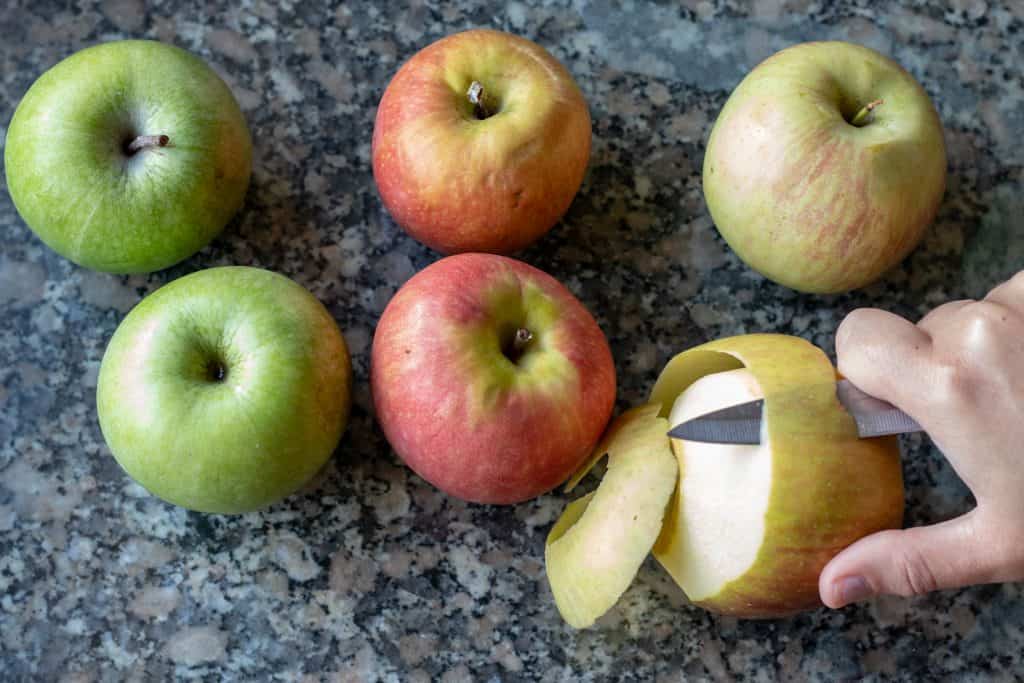 Wash the apples really well under cool water. Peel the apples with a paring knife and reserve the peels to the side for the syrup. 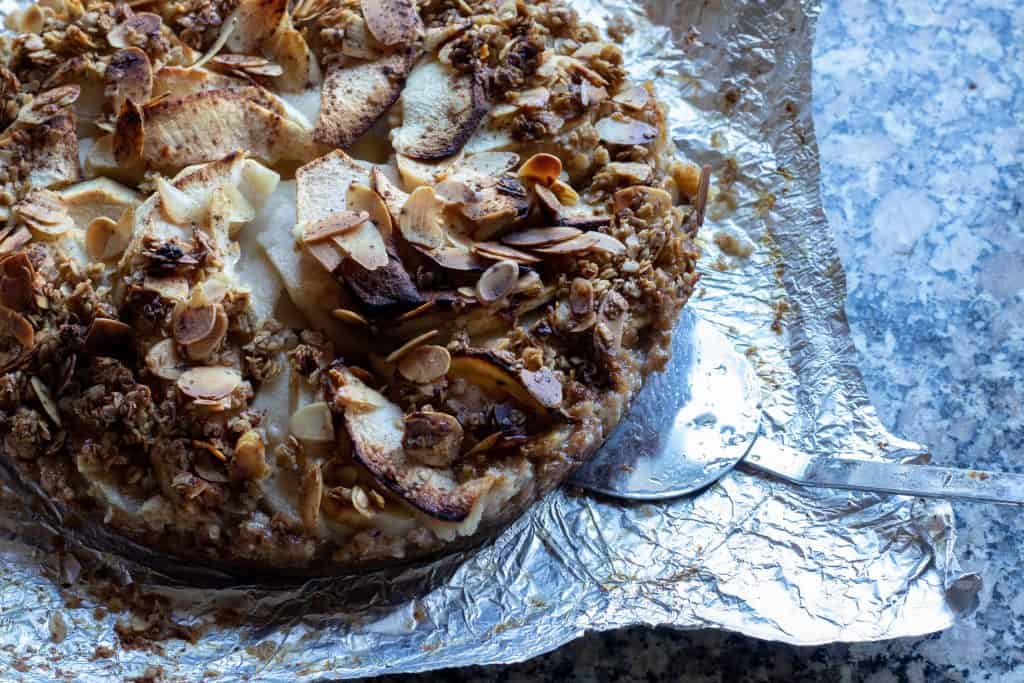 Cut the apples into quarters before cutting out the seeds and core to discard. Thinly slice each apple quarter and place them in a bowl. 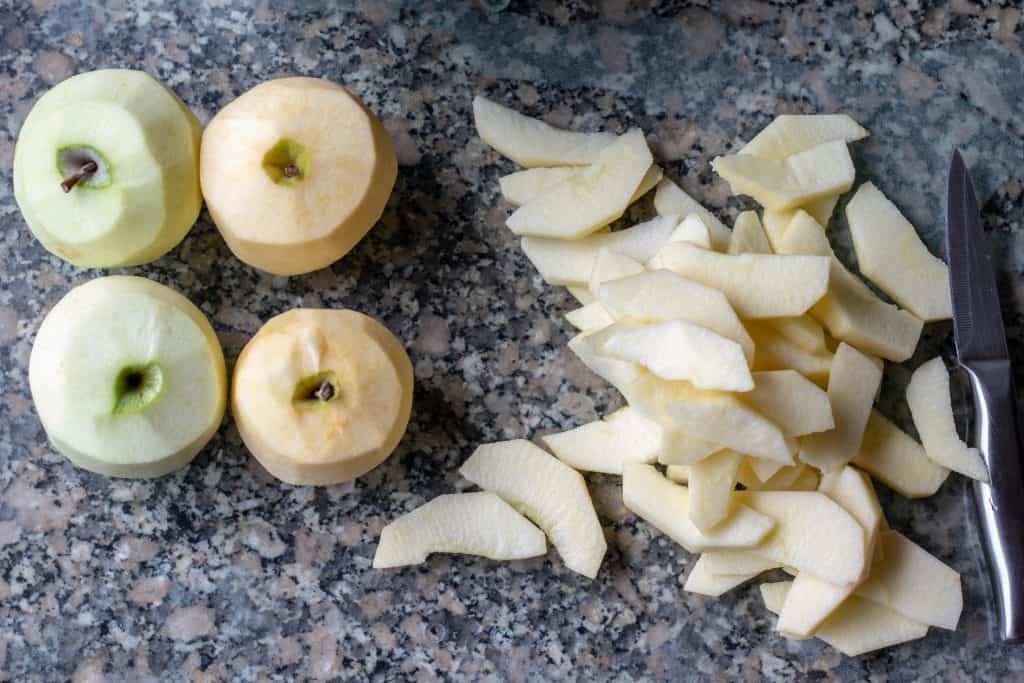 Cut the lemon in half and squeeze the juice over the apples; this helps to prevent them from turning brown while waiting for the syrup to cook. 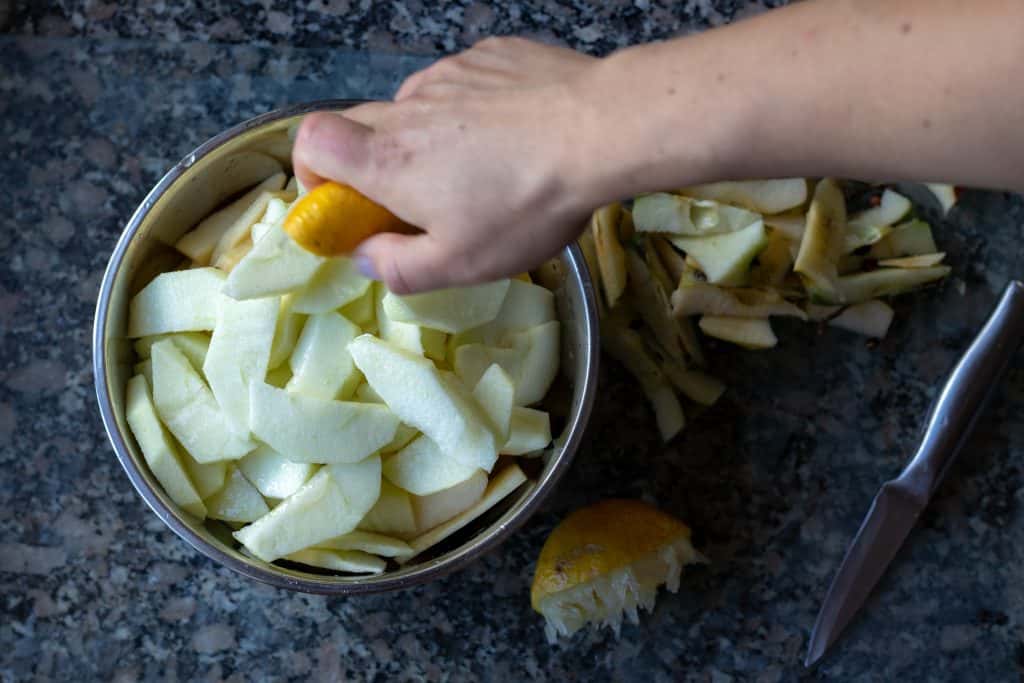 Add the 2 tablespoons brown sugar to the apples and toss them well to coat each slice. Set the apples aside. 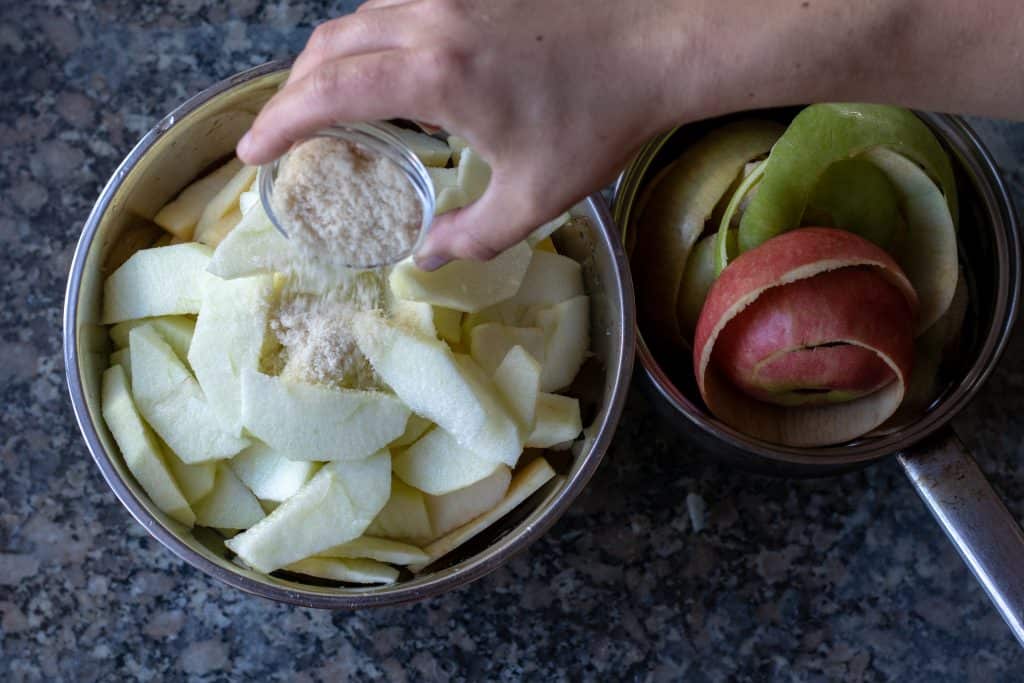 Transfer the reserved apple peels, ginger root, cinnamon stick, sugar, salt, and half of the water into a saucepan and put it on the stove over medium heat. 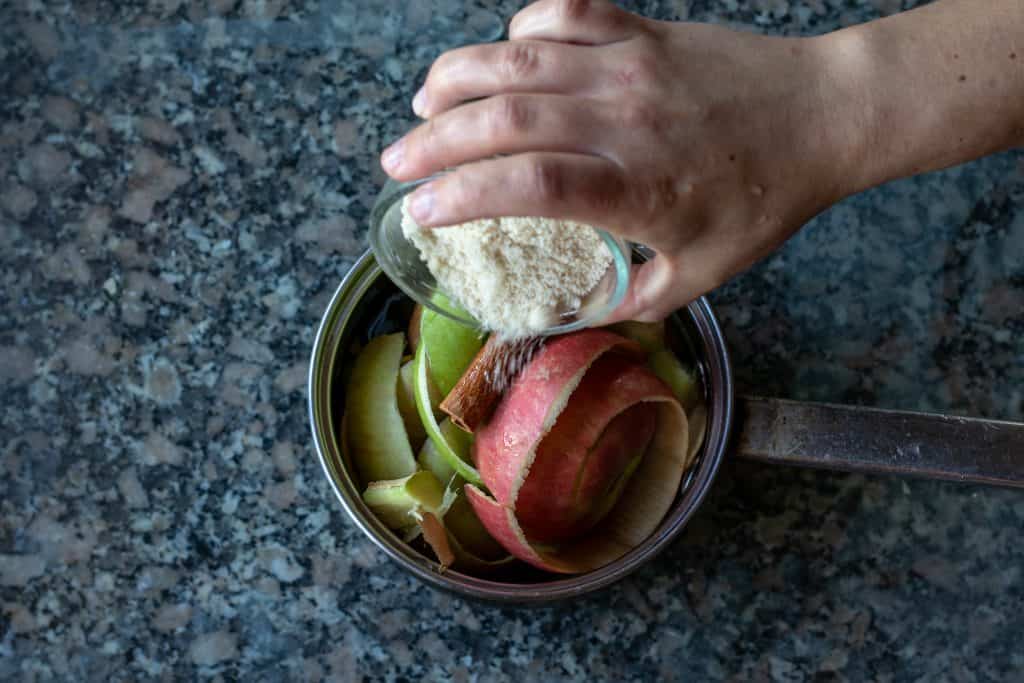 Let the apple peels cook, stirring occasionally as they soften. They need to cook for about 20 minutes to infuse the water with the flavors from the spices, release the juices from the peels and to reduce the liquid just a little. 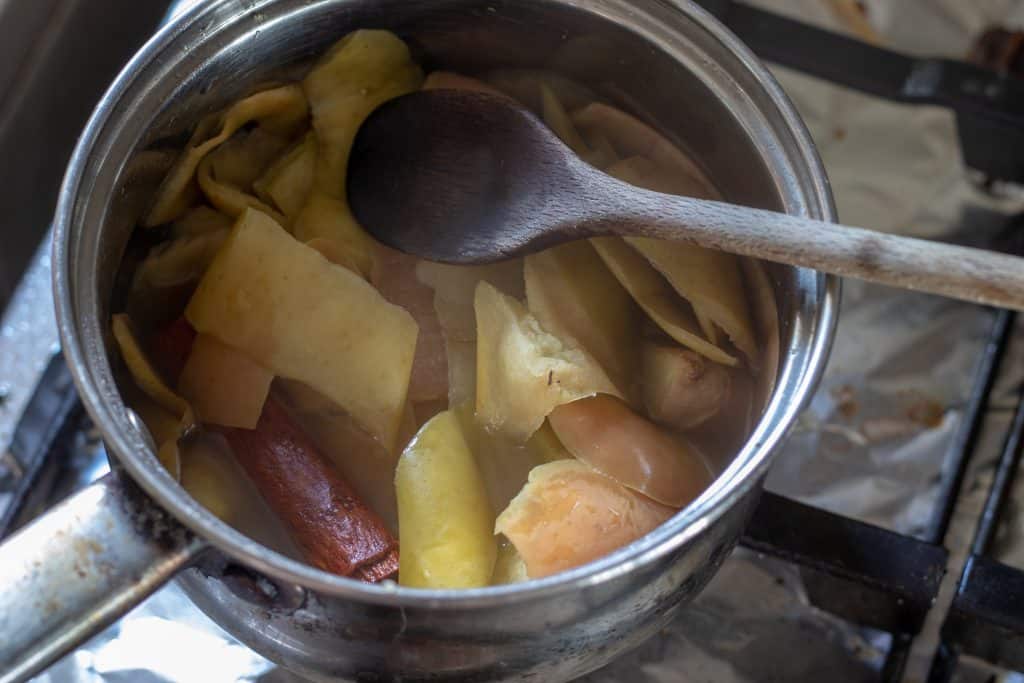 Transfer the apple slices to the pie crust and arrange them in layers on top of each other. For this pie, they are arranged in a circular pattern working from the outside in on each layer. 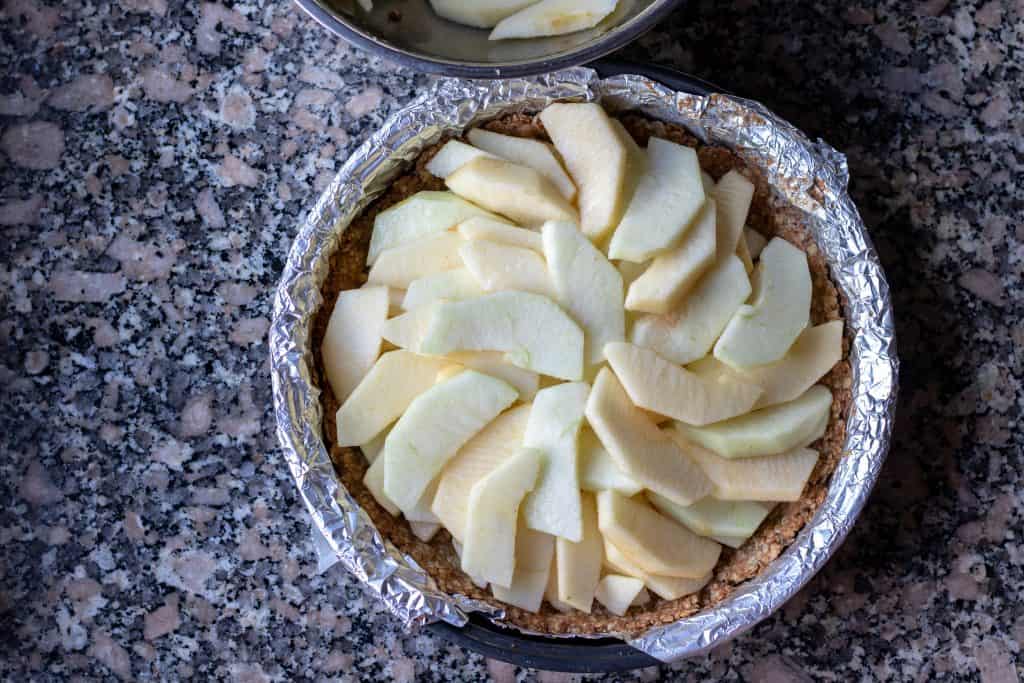 Turn off the heat and strain the apple syrup by pouring it through a sieve and into a large measuring cup. Discard the apple peels, cinnamon stick, and ginger left in the sieve. 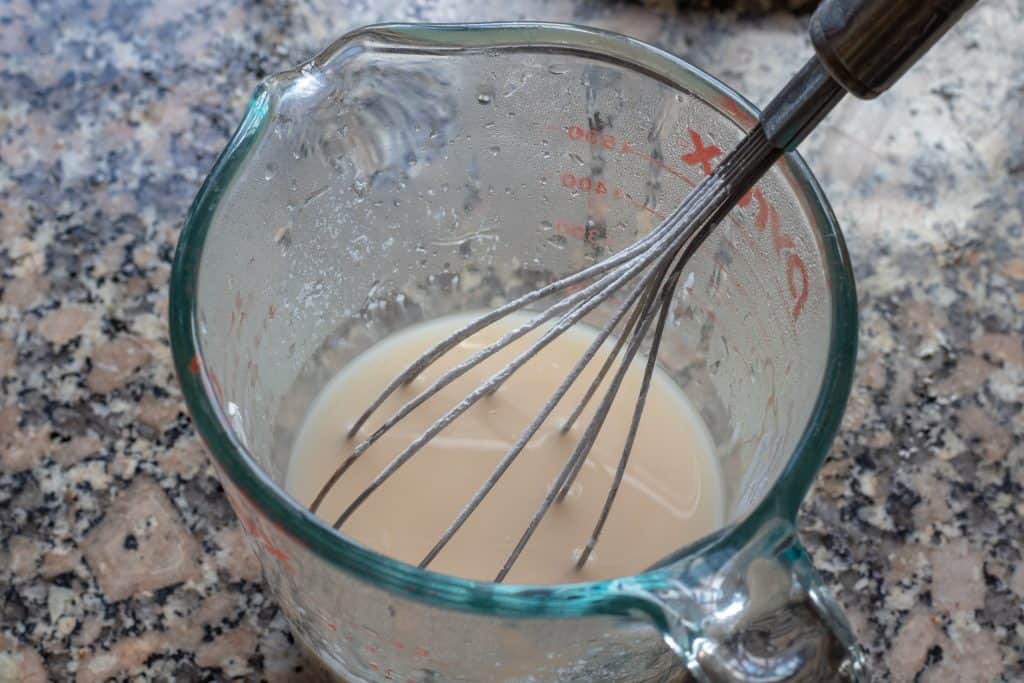 Whisk in the extra water and cornstarch. Pour the leftover water into the cup with the syrup along with the cornstarch and vanilla. Whisk well to remove any lumps before pouring it over the apple pie in an even fashion. 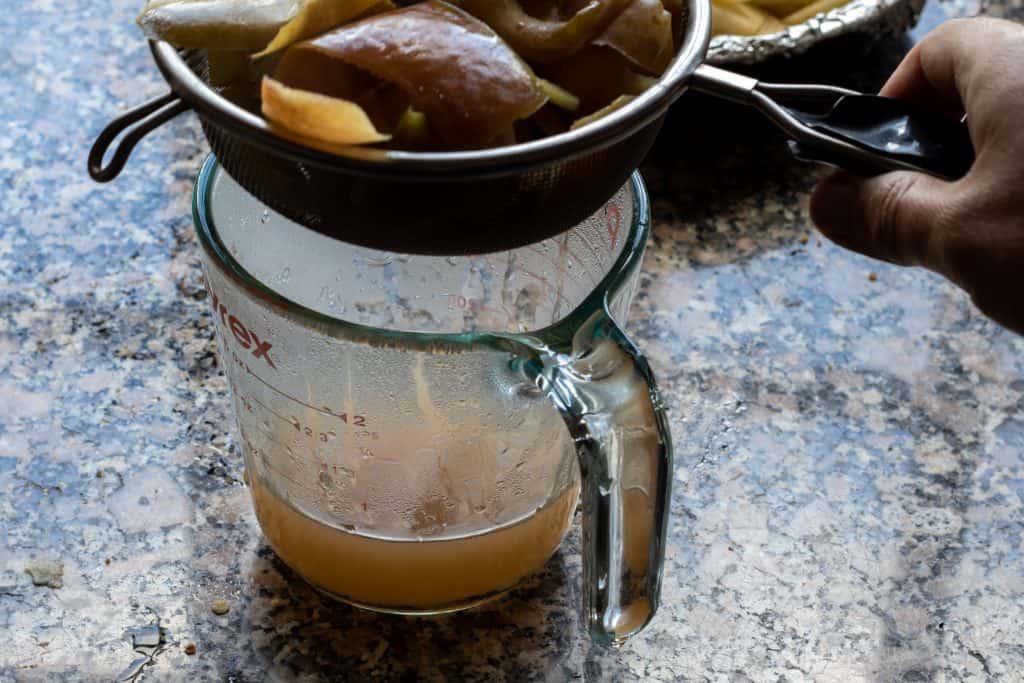 Mix the crumble by pouring the oats, ground ginger and cinnamon, honey, and olive oil into a large measuring cup or bowl and stir well to combine and make clumps, much like the pie crust but it doesn’t need to clump as much. 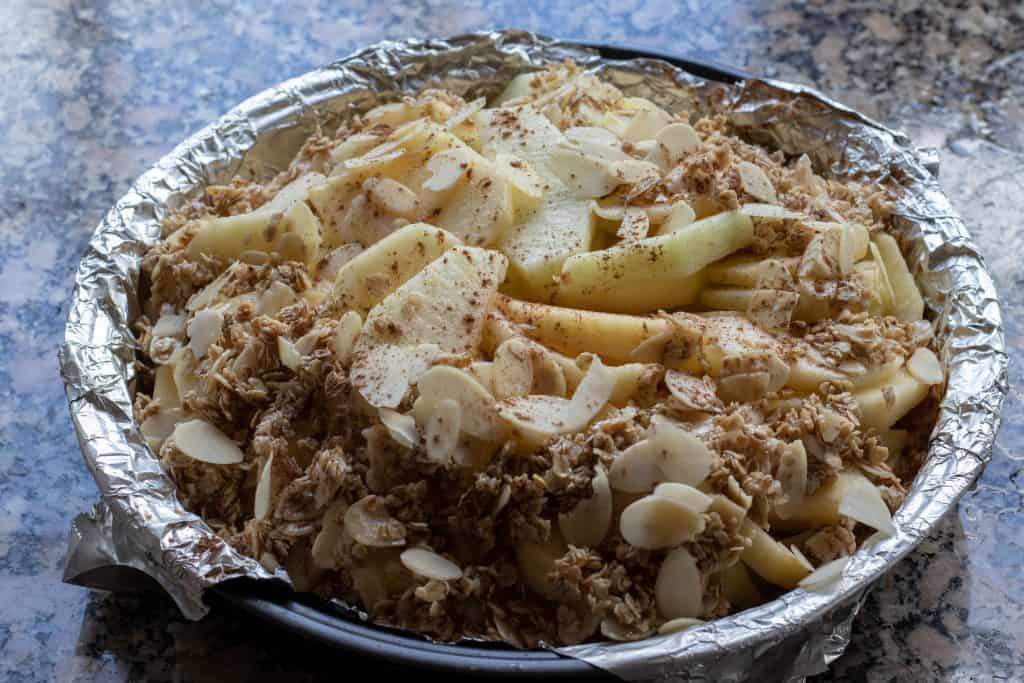 Stir in the sliced almonds and drop the crumble around the edges of the pie, working inward as you go. 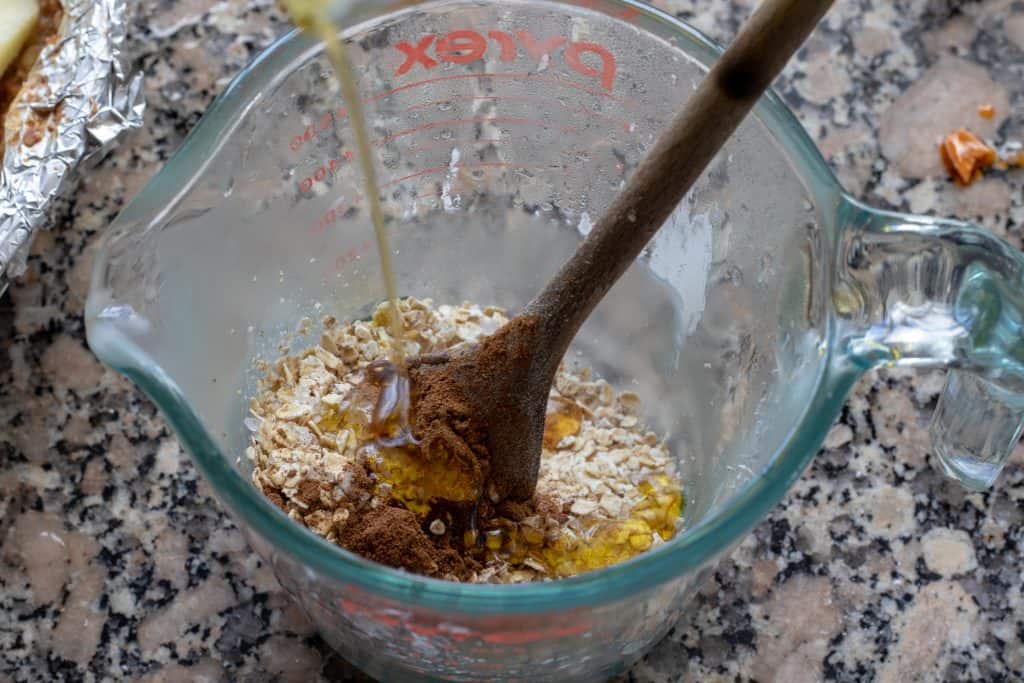 Transfer the filled pie to the oven and allow it to bake 45-50 minutes. It’s done when the crumble and almonds have been nicely browned on top and the filling has become firm but not hard. 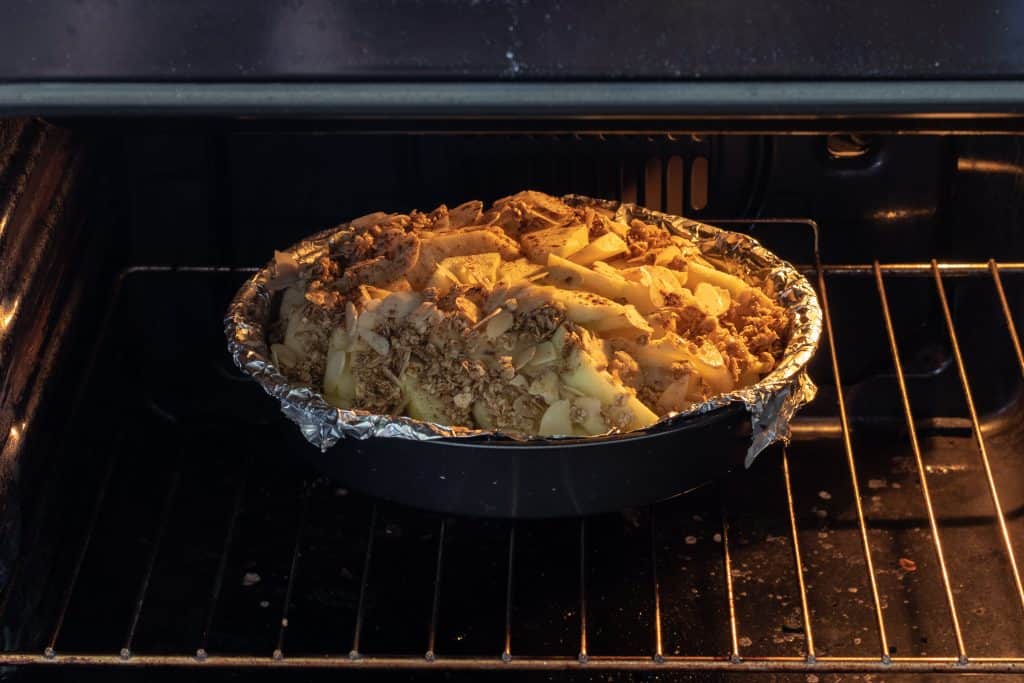 Take the pie out of the oven and allow it to cool for about 20 minutes. With the edges of the foil, pull the pie out of the tin and peel the foil down from the sides, slip a spatula or wide long knife under each side to release the pie from the foil on the bottom and transfer it to a large plate or serving board.

Cut the pie into 8 equal slices and serve immediately.

This apple pie, with its oatmeal crust and subtle sweetness, is perfect for spring, early autumn, or for a light dessert after a heavy winter meal. It could even be one of those pies that could be turned from dessert to breakfast! 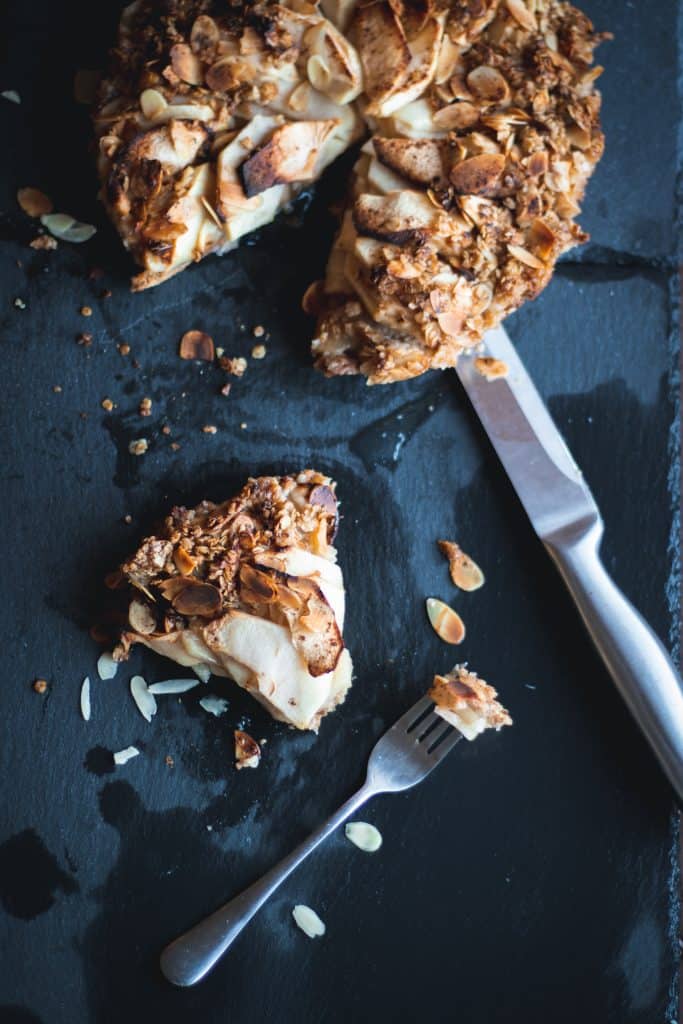 How do you like your apple pie? With a scoop of ice cream, warm, or cool? Let us know in the comments below!