I knew what I wanted the moment Black Friday got here. I wanted a HP Sprocket and a Sous Vide Machine. My machine is a clamp version and was bought from Sam’s Club for about sixty dollars. There are different styles, some of which can be multiple use.

One of the main reasons I wanted to purchase it is because I am not the best at cooking meat, typically leaving that to my husband. Being the chef that I am, though, I thought it’s mighty time I stepped up my game.

A sous vide machine uses water to a set temperature to steam a bag of food to the perfect temperature. Here’s how I explain it to people: Say you like your steak to medium rare (131 degrees Fahrenheit). You have a one inch steak, so you cook the steak at 131 degrees for one hour. At the end you sear it to give it the pretty grilled look. The difference is when you cook the steak traditionally you will have an area between your top layer and the medium rare taste you want, with sous vide it is medium rare all the way through, making it exactly what you were looking for.

For my first steak I wanted to try something a bit different though-  I wanted tuna steak. 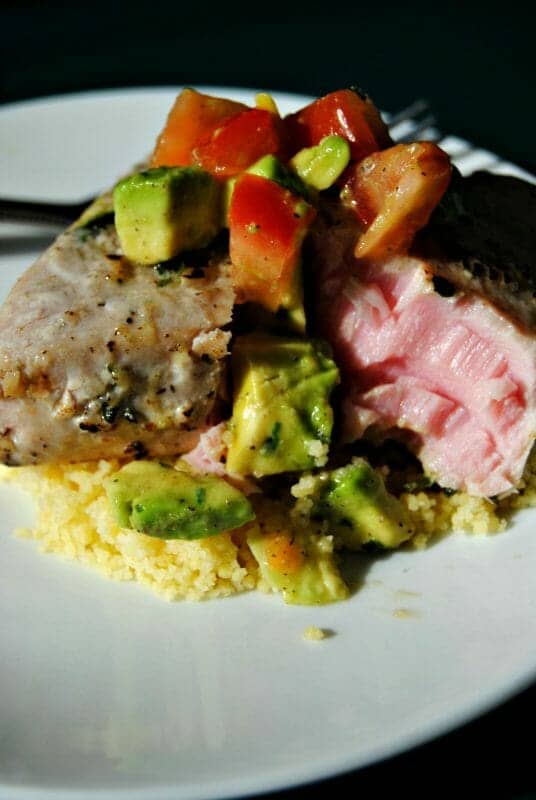 Step One: Salt the Tuna Steak 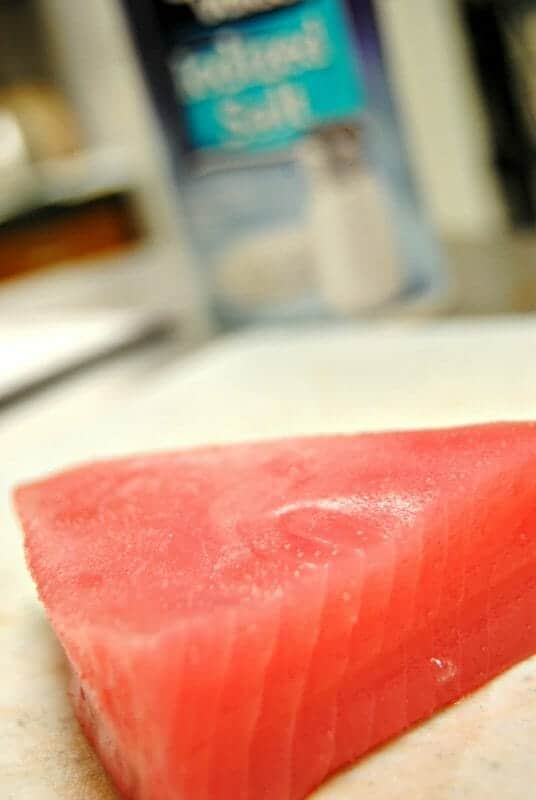 The whole recipe is easy but this part is crucial. In order to get a tender flakyness to your tuna steak, you want to sprinkle it with salt and let it sit for half an hour. I used this time to clean up my kitchen, get my sous vide bath water ready, and prepare my marinade. 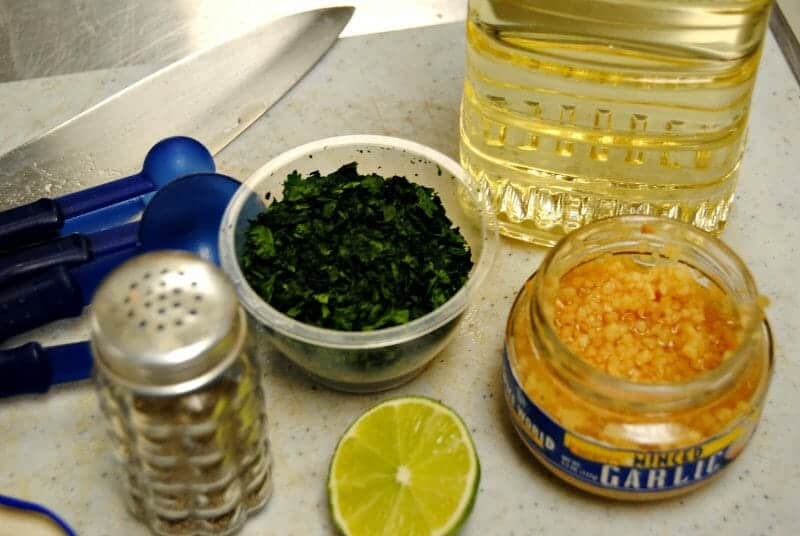 Many times when working with a sous vide machine, the recipes will tell you to use a Vacuum Sealer. I currently do not have one and can tell you that using a traditional ziplock bag works just as well. As a matter of fact, when I was doing research on making the tuna steak, they recommend not using a vacuum sealer because it will hurt the tenderness of the meat. 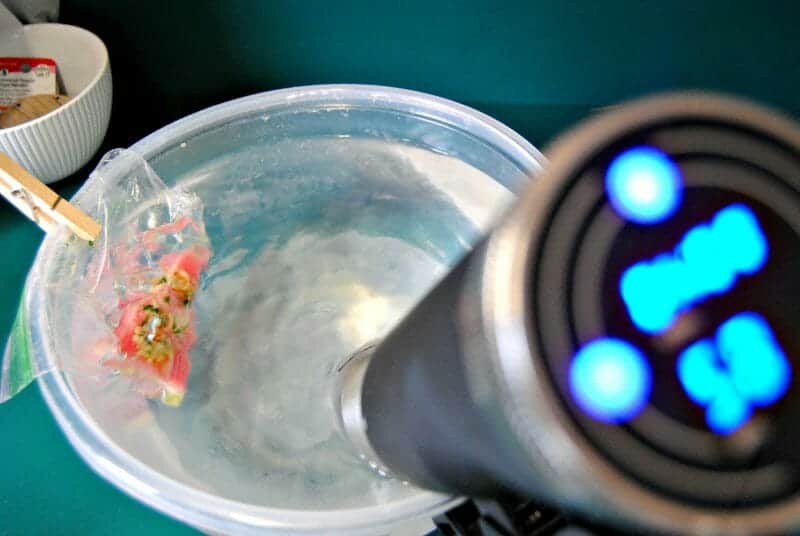 Put the steak in the ziplock bag and add the cilantro-lime marinade as well. Then seal it and add to the bath water with a clip.

*Adding the clip is crucial. If you let it swirl around without an attachment of some sort it will come closer to the machine and the water won’t be able to swirl causing the machine to malfunction.

Also, I like to use a clear container for the water so I can watch what I am making change form. 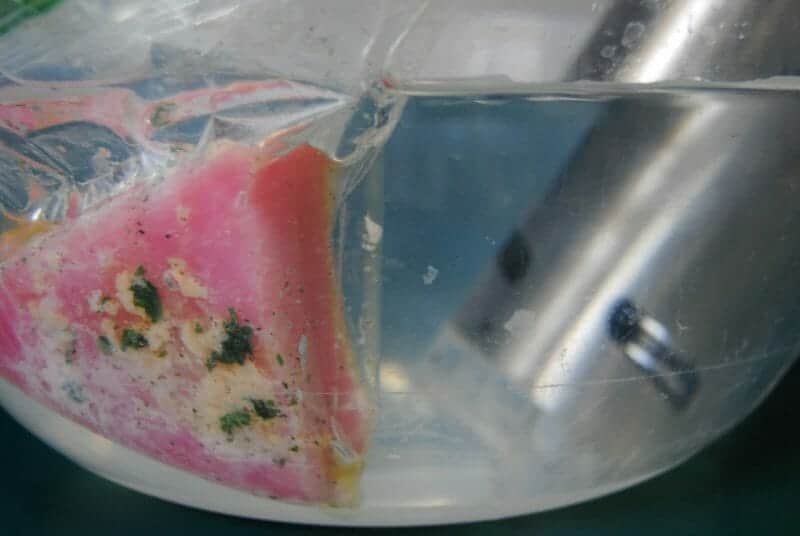 The perfect temperature for the sous vide tuna depends on how you like it. I chose mine for 113 degrees which gives it a meaty taste. If you prefer something similar to canned tuna, you will want to cook yours to 130 degrees.

Time will not change though and ideally you want to cook it for forty-five minutes. While you can cook it longer and it shouldn’t affect the taste, given the sensitivity of the meat, the best option is to cook it for that short of a time. 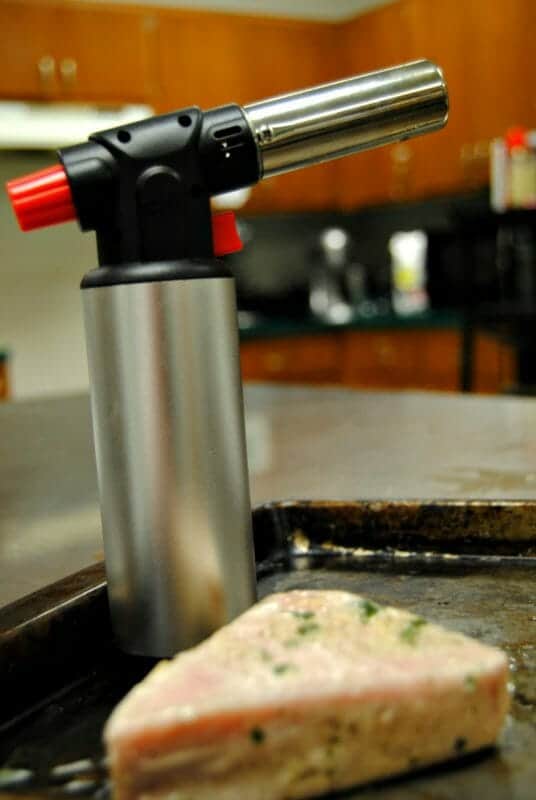 As with most of this recipe, there are many different ways you can sear the meat. You can use the broiler for about two minutes on each side, or you can opt for the grill, giving it that nice line marks, and then there is a skillet set to a sear temperature. 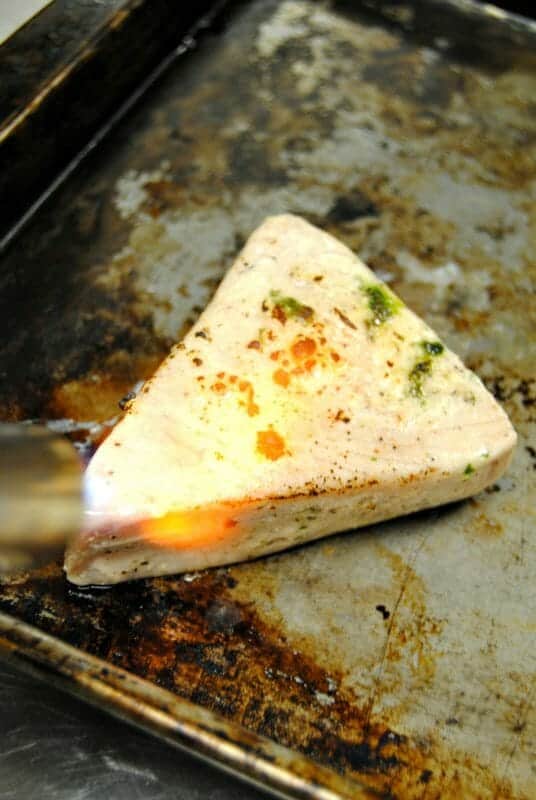 I chose the blow torch because I have a love for fire and, again, there is a joy I get in watching it transform before my eyes. The blow torch creates a nice pop sound as it sears the meat. The best part is once this is finished, you are ready to assemble and eat.

You can see by this picture that the meat turned out very flakey. This is exactly how I wanted it, moist and meaty. The recipe has a slightly fishy flavor that pairs perfectly with the freshness of the tuna.

Combine that with the starch of the couscous and it makes for a wonderful spring or summer time dinner, which around our house is made complete with a Topo Chico lime flavored water. 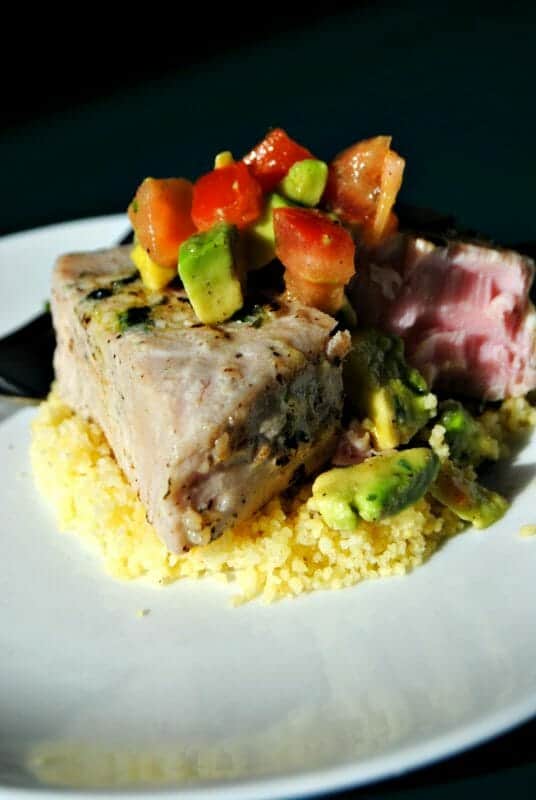