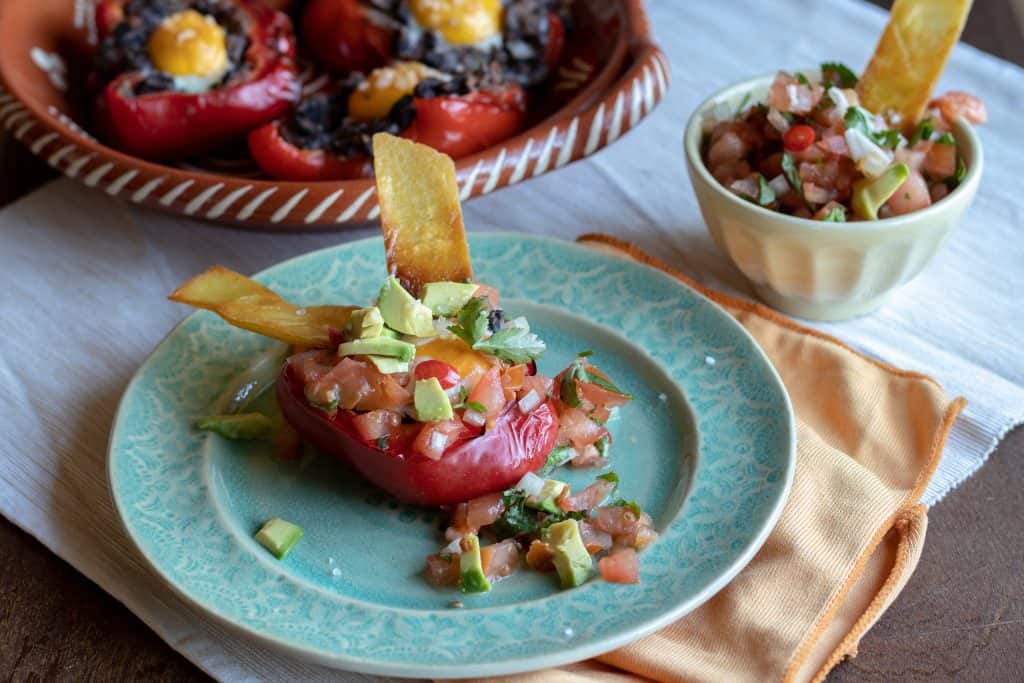 Breakfast has been designated the most important meal of the day for a reason.  It should be something nutritious and filling, but often we opt for a quick bite that includes a ridiculous amount of sugar, refined carbohydrates, and fat instead. That all changes when a beautiful breakfast of Huevos Rancheros stuffed into bright red bell peppers come into play!

The idea for using bell peppers as the vessel for the huevos rancheros comes from the idea that tortillas and refried beans may be too much fat and carbs. These two things definitely are good to fill one up first thing in the morning, but they include a lot of calories and can easily be swapped out for something that is better for the mind and body to get you going for the day. The peppers pack a sweet but mineral and nutrient-rich punch to boost mood, the immune system, and much more making it an ideal addition to any meal, not just breakfast.

Refried beans are essential to the huevos rancheros experience. It’s just not the same without them, but they can be made in a better way like what has been done with what I like to refer to as “faux refried black beans”. This version gives a similar texture but doesn’t include lard or much-added oil to make the smooth, paste-like consistency. Black beans have also been considered one of the highest protein containing beans that also includes a good amount of fiber to help that blood sugar stay even and with minimal spikes.

Eggs are well known to be an awesome ingredient when trying to eat a healthy breakfast. They are also essential to this dish because of the flavor and texture they add with a rich runny yolk. Just cutting into a runny yolk and letting it ooze over the black beans, is all the added healthy fat needed to make a perfect bite!

Top it all with a quick and freshly made pico de gallo and avocado to enhance not only the visual appeal but the flavor and salubriousness of the dish and you have the perfect breakfast!

Now, one might be wondering what happened to the tortilla that is so loved in the original huevos rancheros dish. Not to worry! Instead of full tortillas, strips of tortilla are used and then quickly fried in a little olive oil until crisp and crunchy. This dish was designed to enhance and make healthier, not to deny anyone of anything that made the original great.

Let’s get in the kitchen and get started! 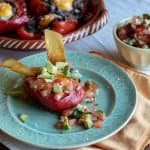 STEP ONE – PREPARE THE VEGETABLES

Turn the oven on to 350 F and let it heat up while preparing everything. Line a baking sheet with aluminum foil.

Remove the top half inch off of the tomatoes. Remove the stem and dice the rest of the top and set it aside. Dice the rest of the tomato and put it in a separate pile. Peel the onion and dice it before dividing it into two separate piles. Cut the stems off of the cilantro and mince them and set them in their own pile as well. Roughly chop the cilantro leaves and put them in another pile.

Cut the red bell peppers in half and remove the stem before placing them on the prepared baking sheet. Roll the lime back and forth on the cutting board to soften it just a bit and release the juices before cutting it in half. 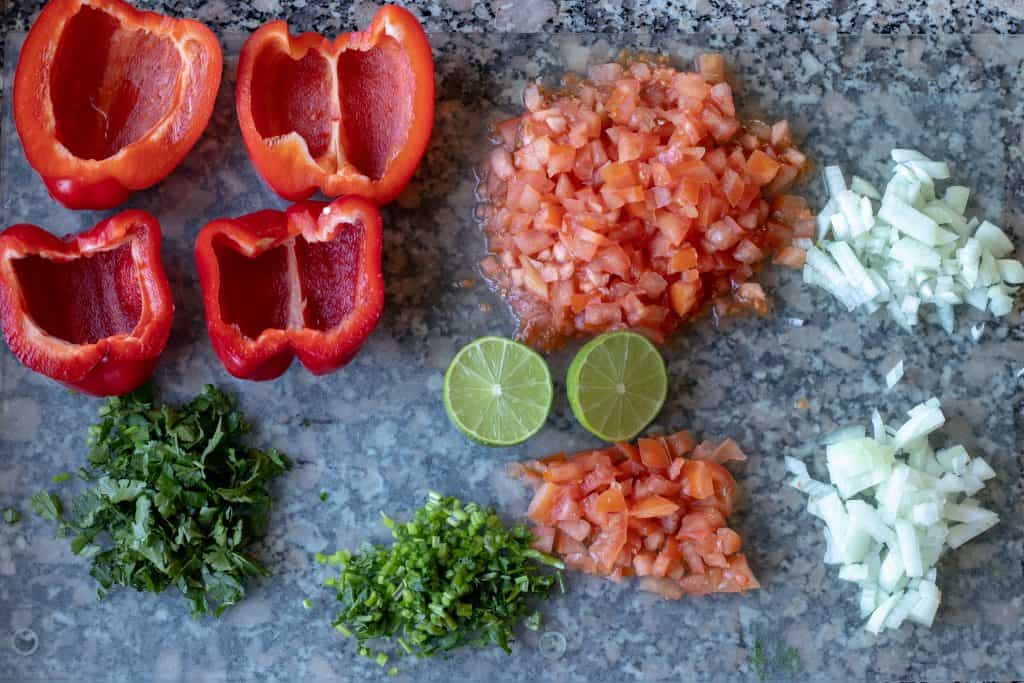 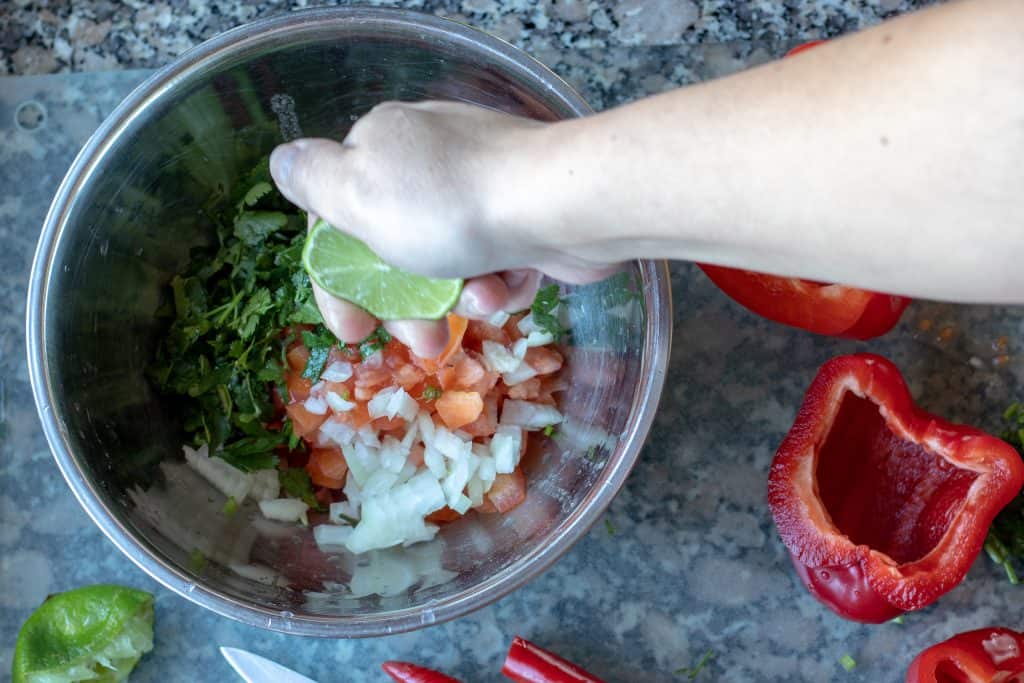 Put the two diced tomatoes, half of the onion and the cilantro leaves into a large bowl. Slice the red chili pepper and add it into the bowl. 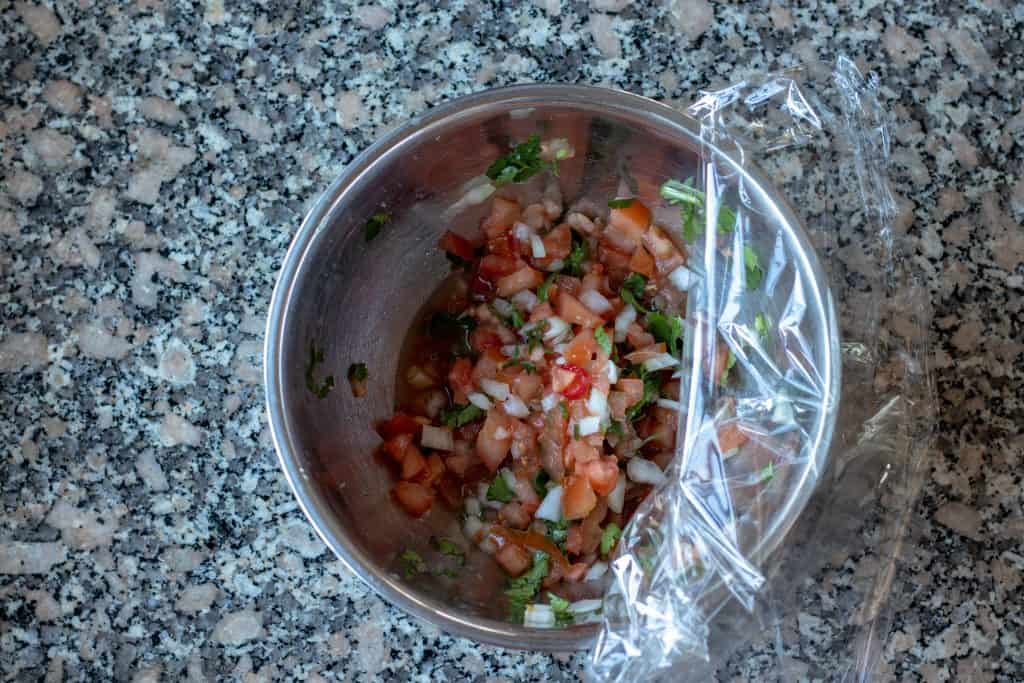 Squeeze the lime into the bowl and season with a pinch of salt to taste. Stir well and cover with plastic wrap. Put the bowl in the refrigerator until ready to use. 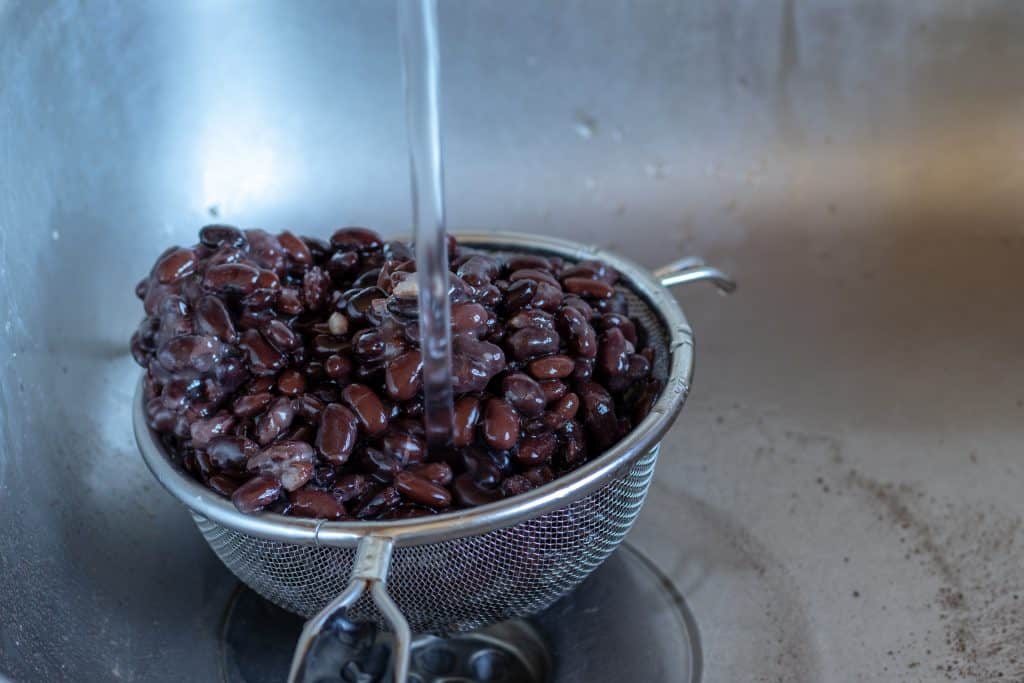 Pour the black beans into a sieve or colander and rinse them well under cool water. This will remove any leftover liquid from the can.

STEP FOUR – SAUTÉ THE BASE FOR THE BEANS 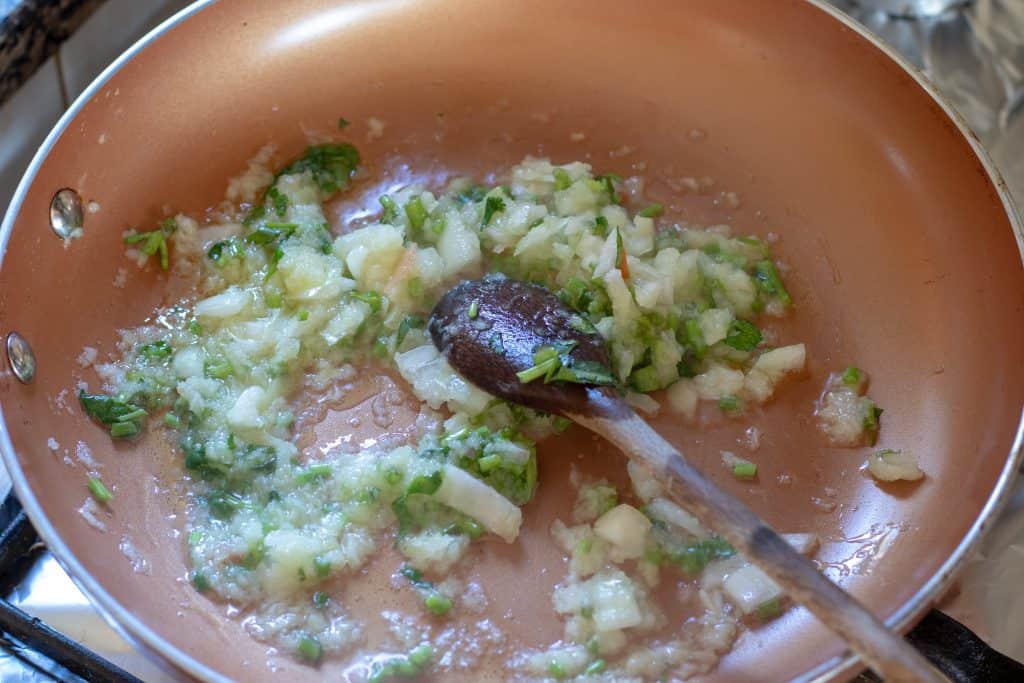 Heat the olive oil in a sauté pan over medium-high heat. Add the rest of the onion and chopped cilantro stems to the pan and stir well. 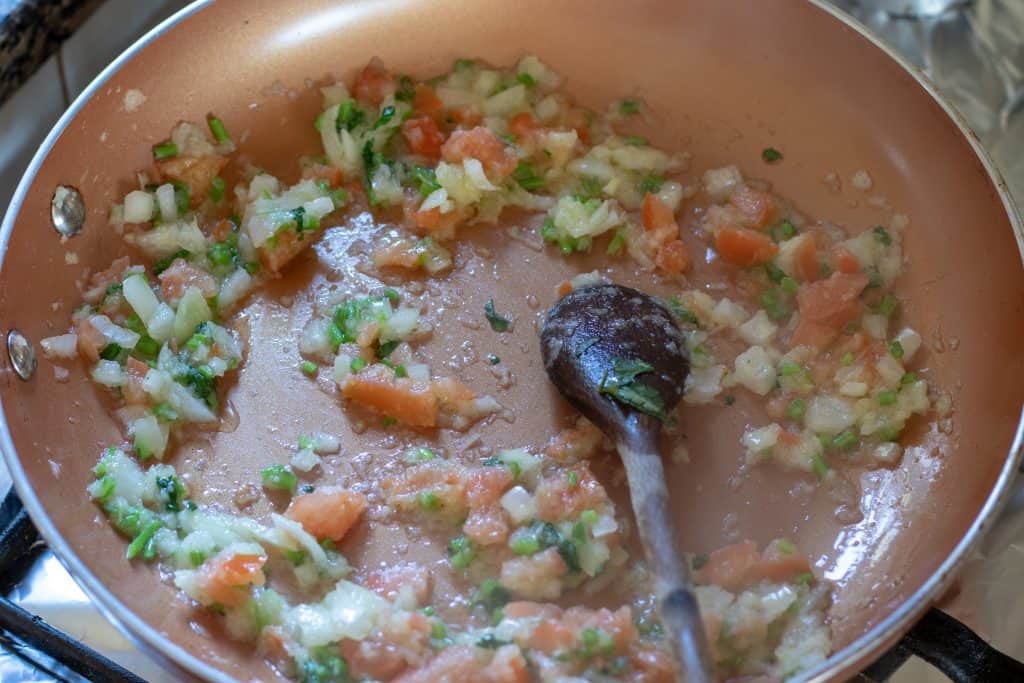 Let them cook about 2 minutes before adding in the last of the tomato, stirring again. Cook 2-3 more minutes. 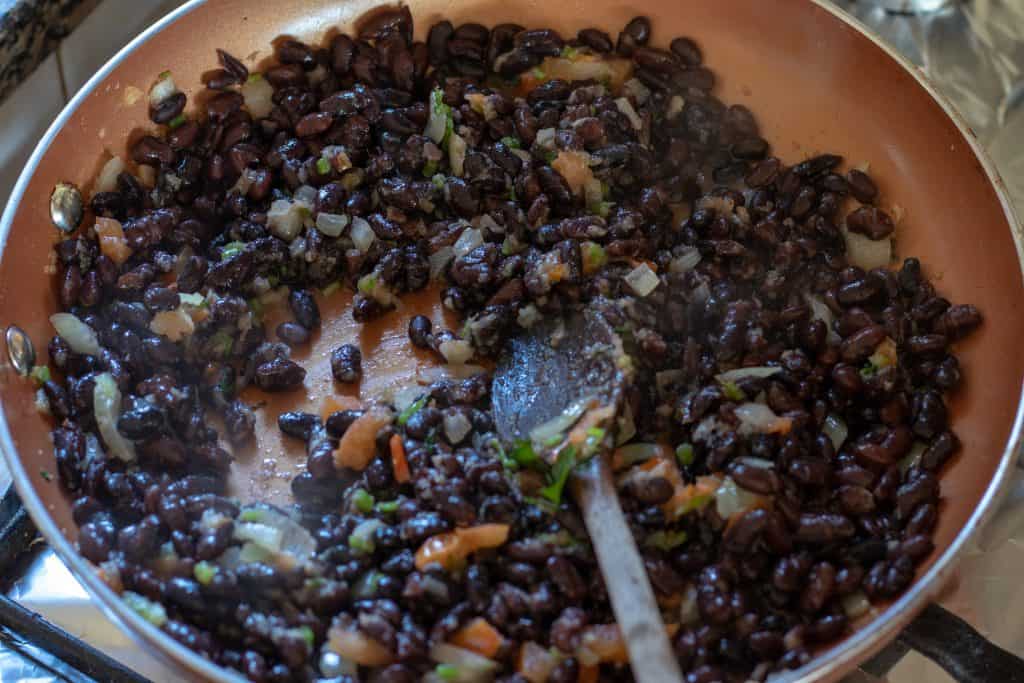 Add the rinsed and drained black beans to the pan and stir them to combine. With the back of a wooden spoon, gently smash some of the beans into the pan.

Pour a bit of water, just enough to barely cover a single layer of the beans, and stir well. 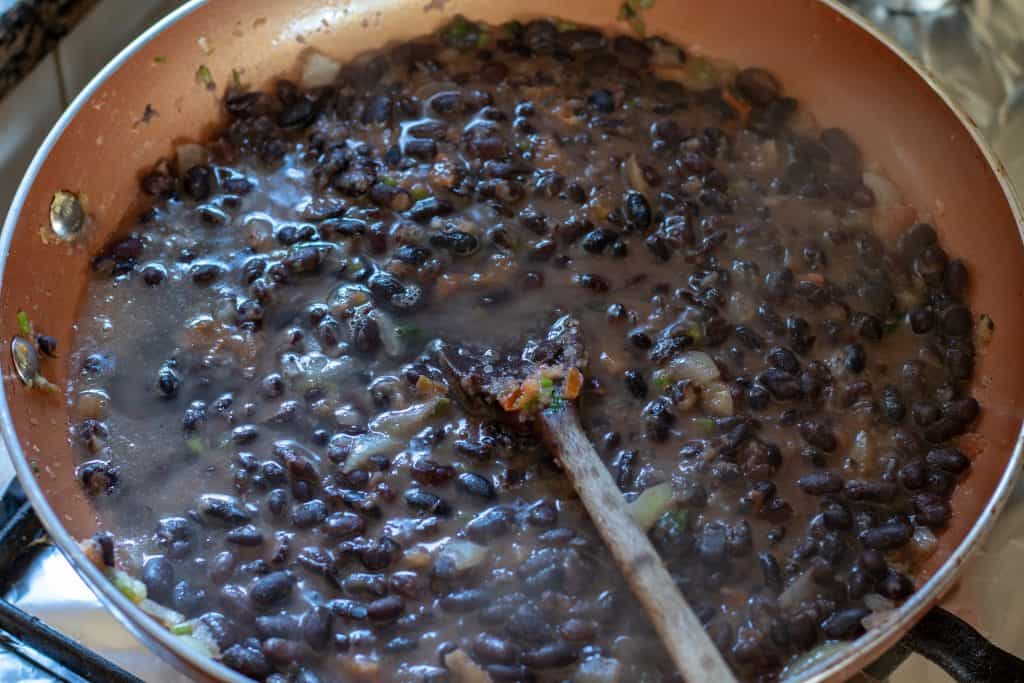 Bring it to a simmer, but make sure to stir it frequently so the beans soak up the liquid a bit and nothing sticks.

Once the beans have soaked up a bit of the liquid and what’s left has become thick, mash the beans again with the back of the spoon. 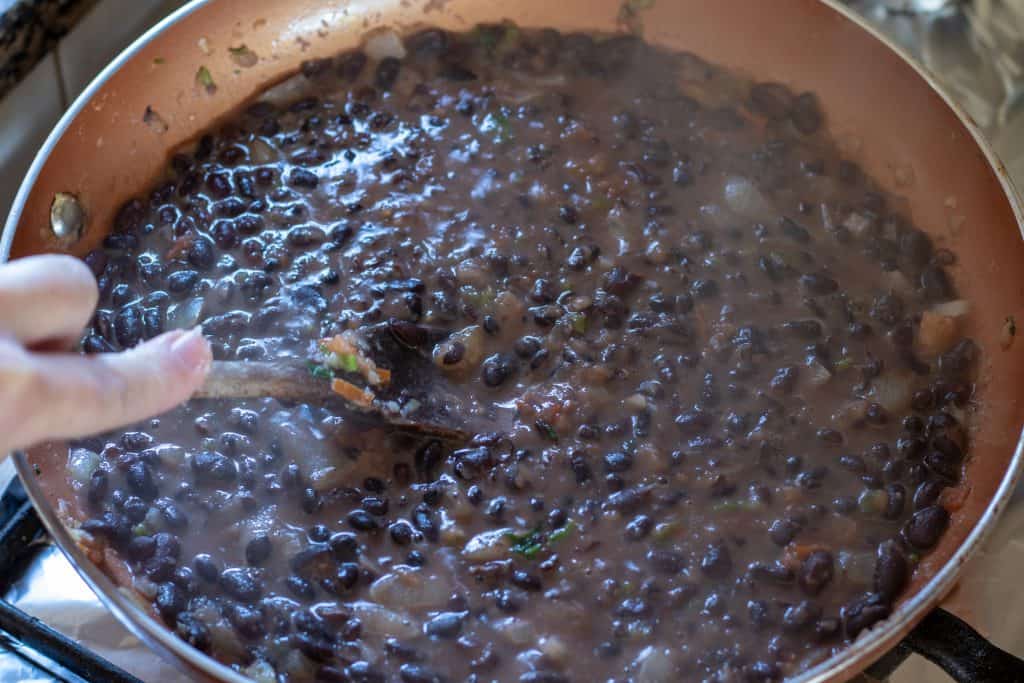 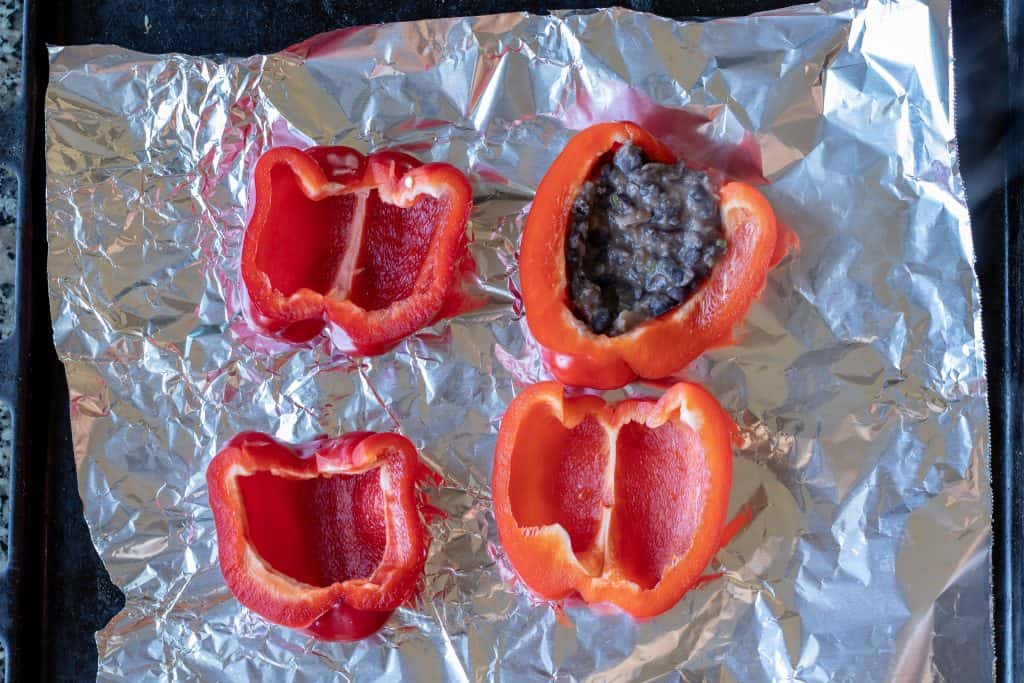 Spoon the prepared black beans into each pepper half. With a spoon, make a hollowed out space in the middle of the beans for the egg.

Crack the egg and remove most of the yolk by transferring the yolk back and forth between the shell halves. Add the yolk and white attached to it to the black beans in the pepper.  Repeat with all of the peppers. 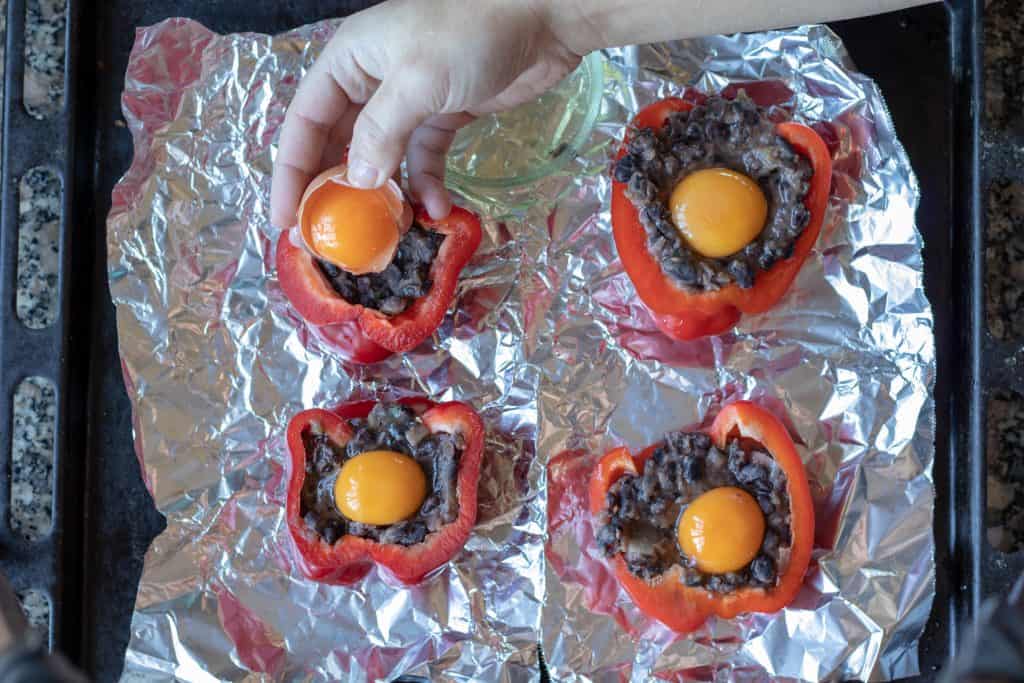 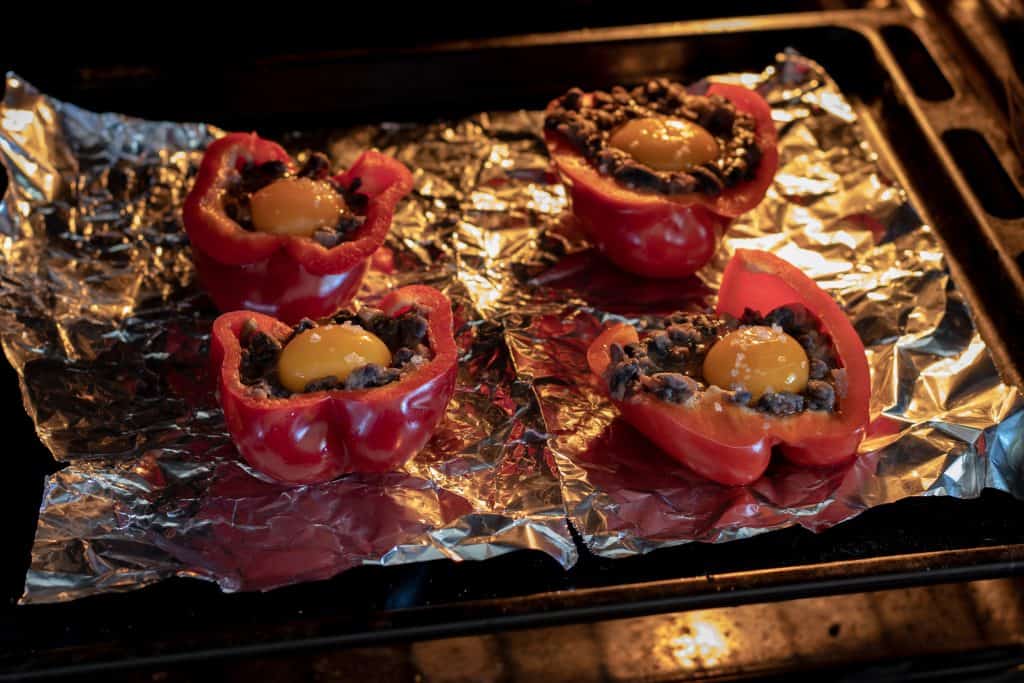 Slide the baking sheet with the filled peppers into the oven to bake about 15 minutes. They will be ready when the egg white has set and the skins on the peppers have wrinkled a bit. 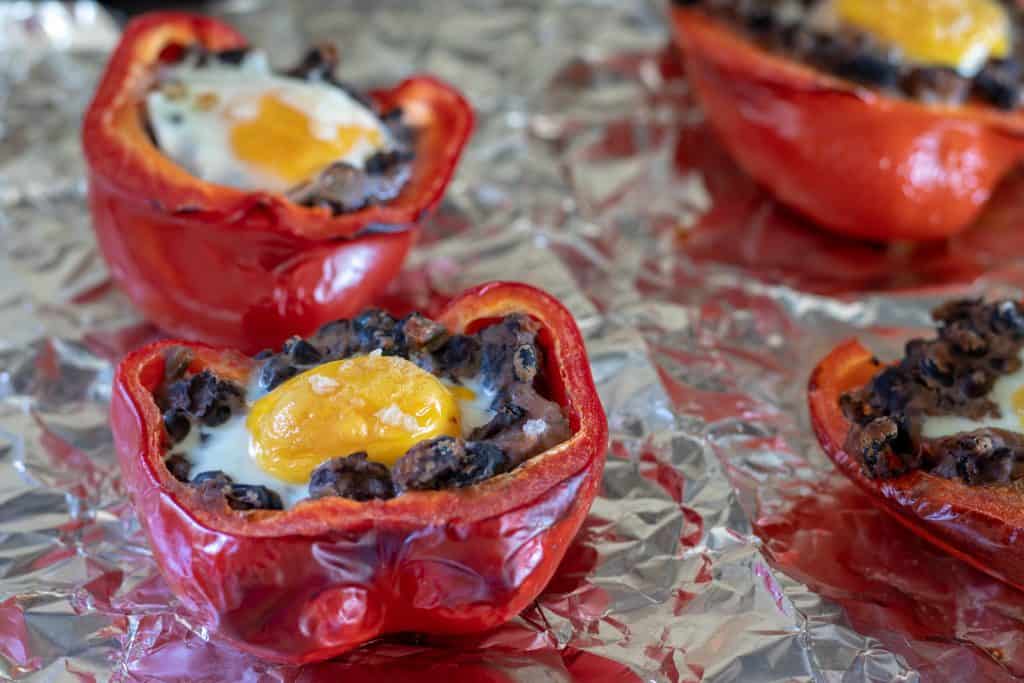 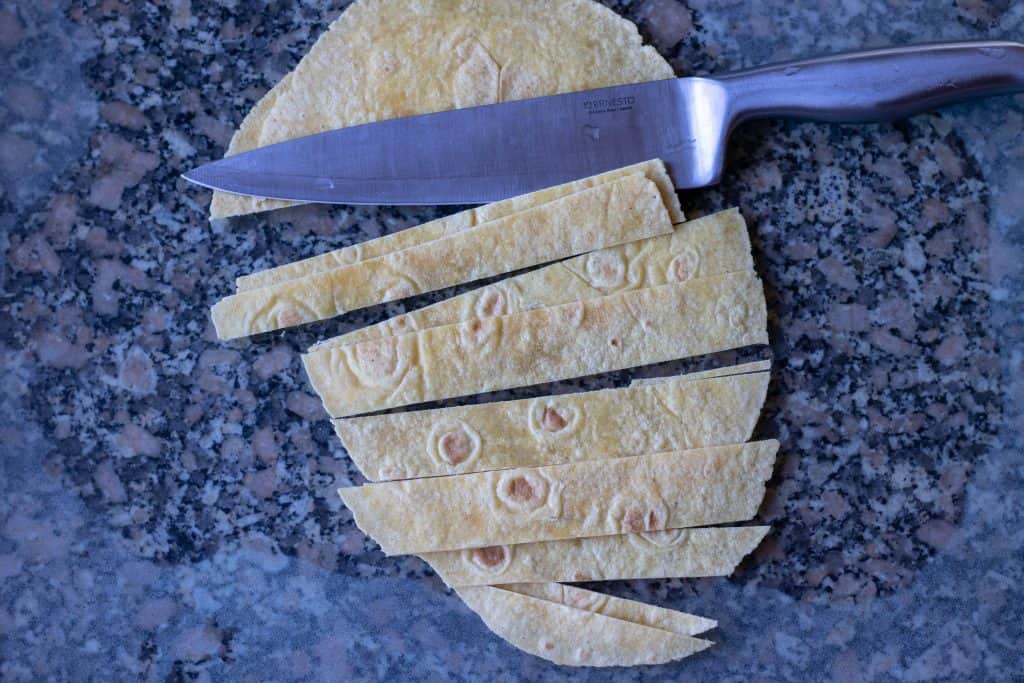 Lay the tortillas on a cutting board, one on top of the other, and cut them into 1 inch thick strips. 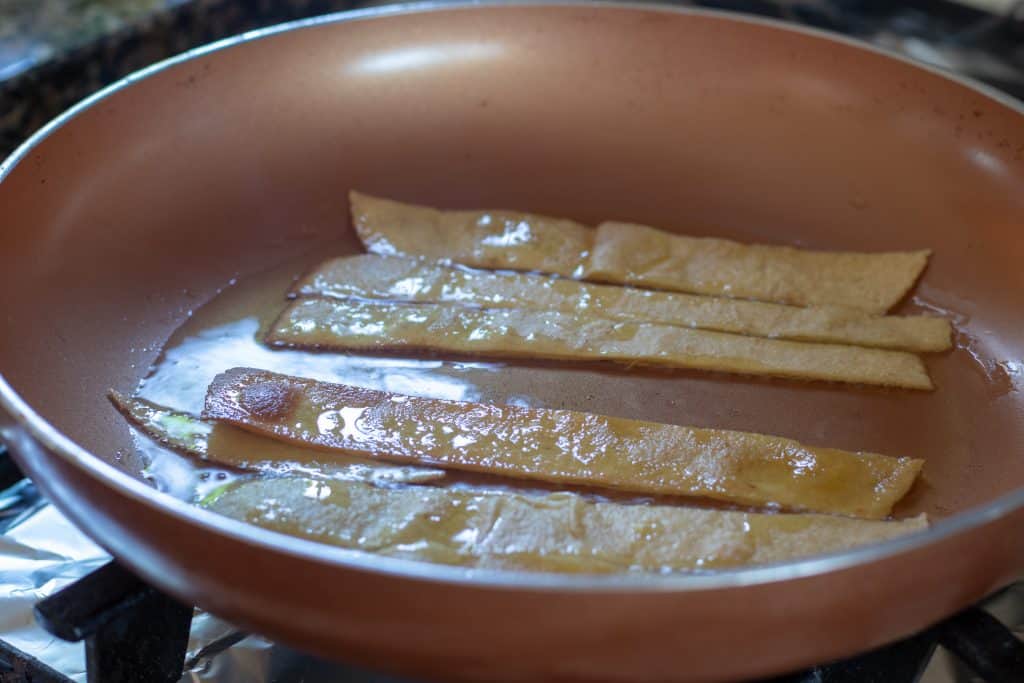 Heat the olive oil in a sauté pan over medium-high heat. Lay the strips of tortilla in the pan in a single layer and allow them to cook about 2 minutes on each side. They will be crisp and brown when ready.  Repeat with the other tortilla. 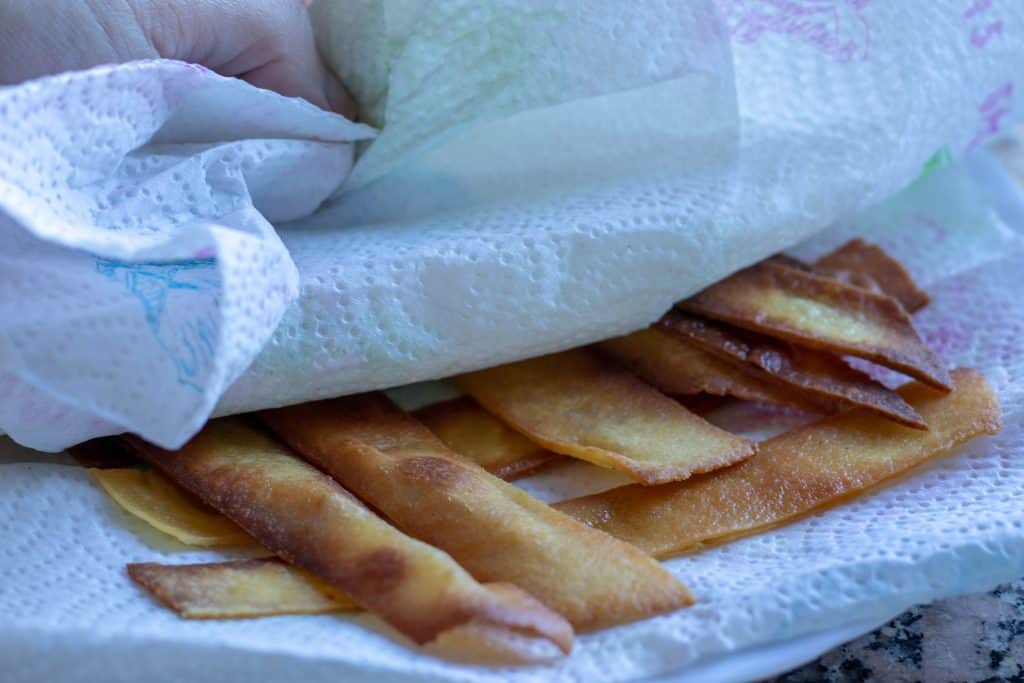 Line a plate with paper towels and move the cooked tortilla strips to it. Blot the tortillas with another paper towel to remove any excess oil from frying them. 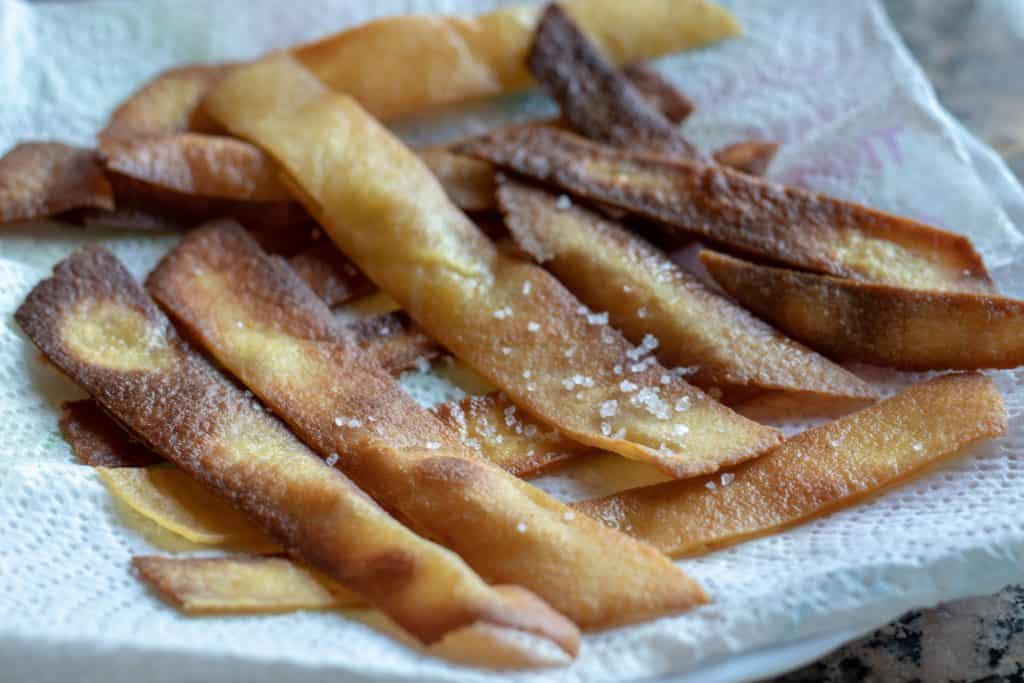 Sprinkle coarse salt on the tortilla strips while they are still hot. 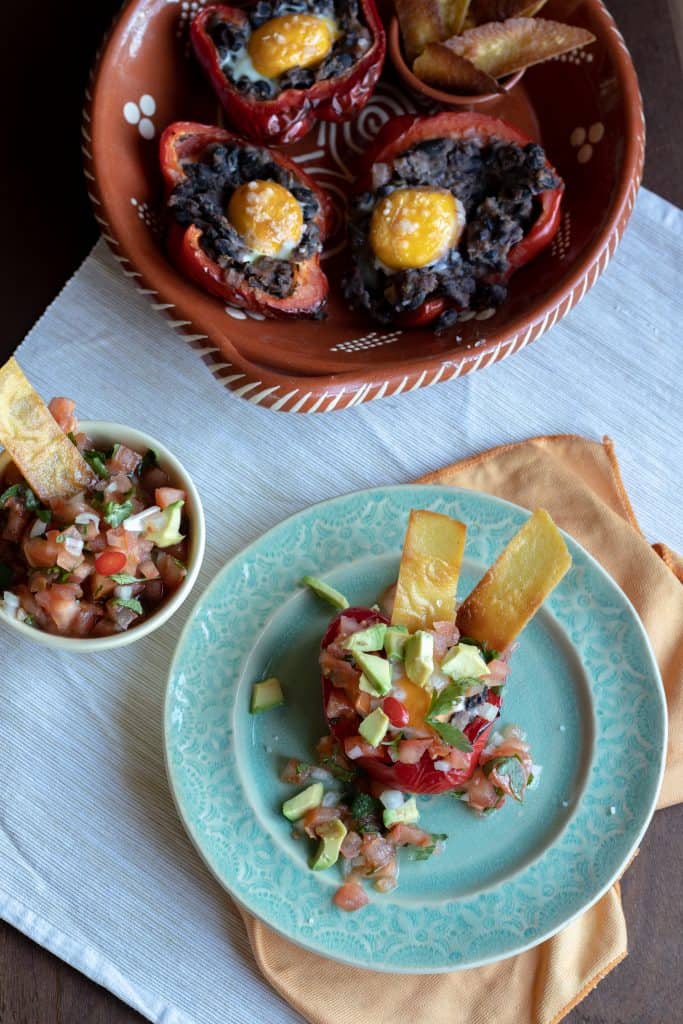 Cut open the avocado and remove the seed. Cut the green flesh down lengthwise, not going through the skin, and then across horizontally. With a spoon, scoop out the avocado cubes. Plate the stuffed pepper and add a spoonful of pico de gallo, some avocado, and a couple strips of the fried tortilla. Serve immediately.

As you can see, these huevos ranchero stuffed peppers are a beautiful and healthy way to start the day! The flavor can be altered just by changing this basic pico de gallo by adding more peppers like this one here, or use topping similar to these citrus chicken tacos.

To make this easier, try the black beans from this recipe in this homemade steak burrito recipe and just double it to use them for breakfast leftovers.