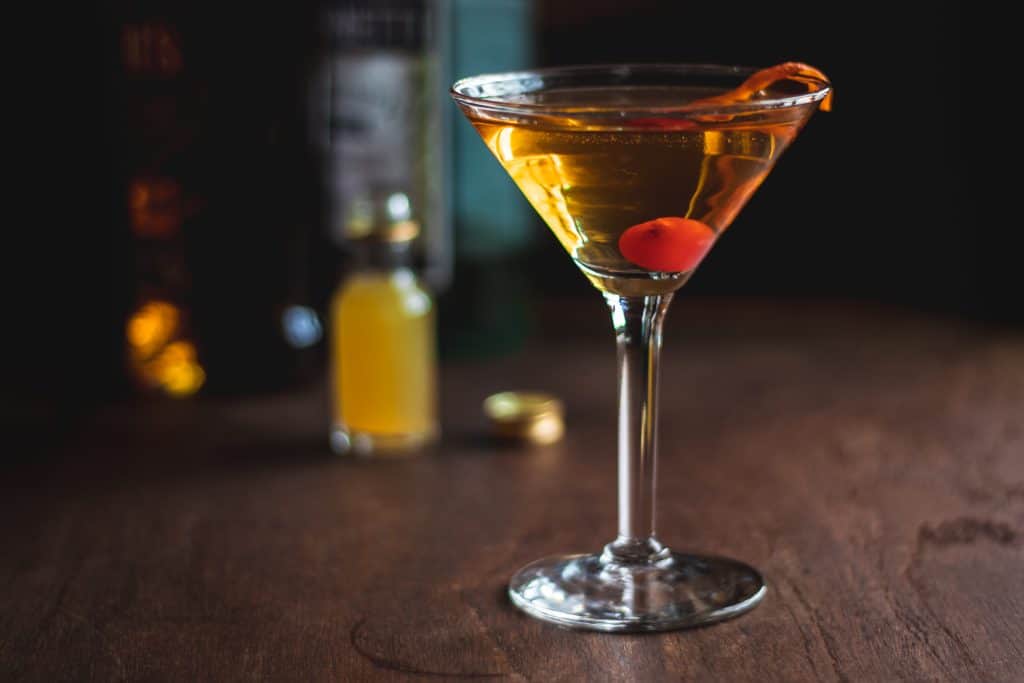 I admit it, I’ve never had a Manhattan before. It was a type of drink I always thought was for a more sophisticated creature than I. The smooth glass like surface made from two parts whiskey, one part vermouth, and a dash or two of bitters adorned with a dainty twist of citrus peel and a sweet electric colored maraschino cherry. It was a cocktail that looked and sounded as elegant as the people that should be imbibing it, but was actually so simple to recreate at home. The one item that I found difficult to procure for the drink, was the necessary bitters.

Bitters are essential to many alcoholic mixtures. They provide a couple drops of unique aroma that changes the overall taste of the drink it is added to. Depending on the type of bitters be they the famous Angostura bitters, or a premade orange bitters, or a concoction brewed at home with a bit of imagination and love tossed in, they make the drink what it is.

Problem is that many can’t find them at their local spirits or liquor vendor or don’t have the time to wait for an entire month to enjoy a fresh bottle of homemade bitters. Which means a bit of investigating was needed to find a new way. The secret to quick homemade bitters lies entirely in the procedure.

Instead of waiting for the flavors to develop into a beautiful marriage of spices and acidic bitters as it seeps into a high proof alcohol over time, science had to come to the rescue by speeding up the process through cooking.

Cooking the flavors straight into the alcohol isn’t the way to go, however. Instead these need to be stuffed into a container, a heat proof plastic bag was suggested, but I choose a glass jar instead to be safer and to not accidentally melt the plastic. This also requires some understanding in that glass has to be able to let the steam out as it heats up or it will break, so no sealed lid is allowed. If these steps are taken, the whole process that usually takes about a month long to produce your bitters, can be clipped down to about 30-45 minutes.

Of course, this means that when a cocktail craving strikes, you can mix and match your bitter flavors to your mood. They say the required flavors need to be three to four spices, a bit of fruit, something bitter like citrus peel, and a high proof liquor like vodka.

Keeping all these things in mind and your manhattan can become a truly creative labor of love that doesn’t have long to wait! 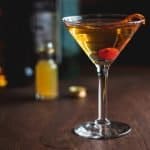 If a high proof vodka is unavailable, use something else that is high proof like everclear or a  high proof rum or whiskey.

STEP ONE – PREPARE THE SPICES FOR THE BITTERS

Break the cinnamon stick into smaller pieces so that it can fit into the jar easily. 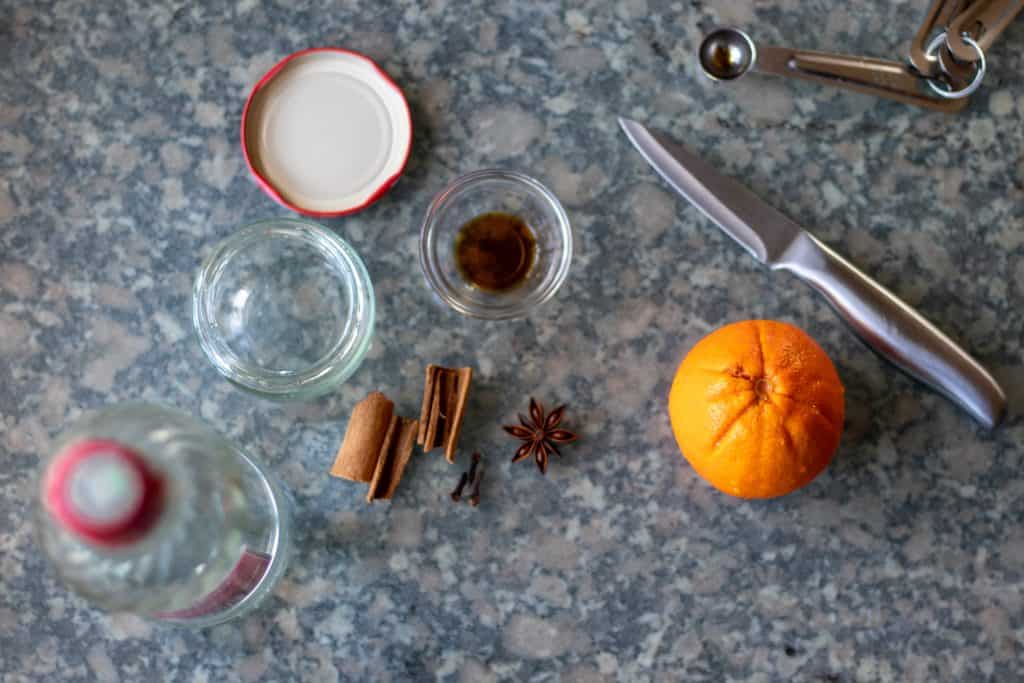 Cut the orange peel from the orange and scrape off the white pith on the inside with a knife and get rid of it. 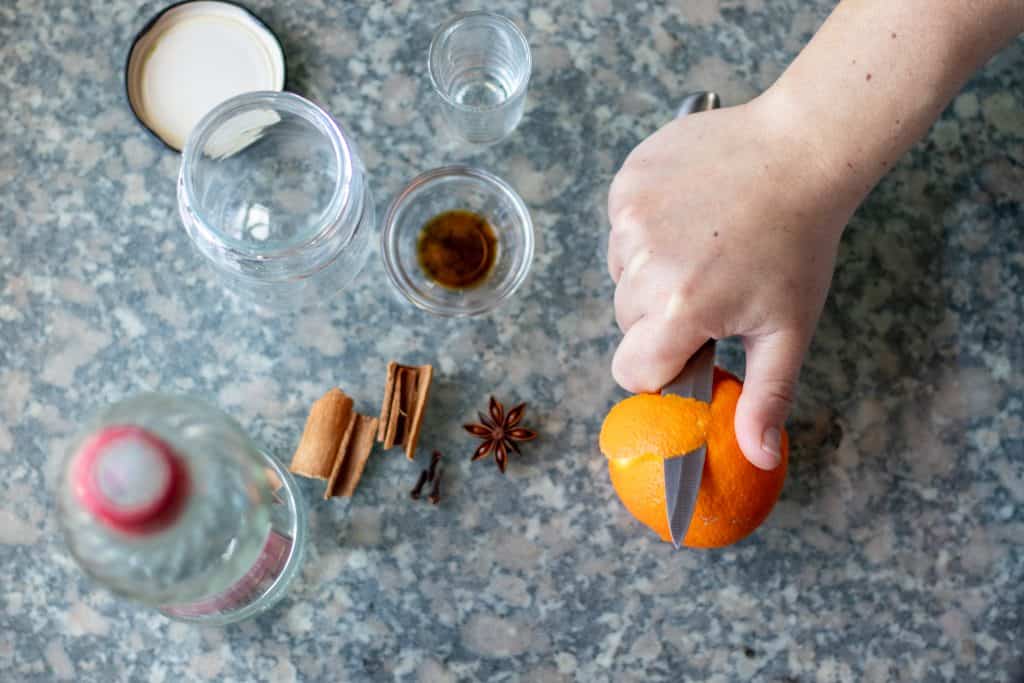 Break the orange into segments and then break the segments in half if needed so they fit in the jar. 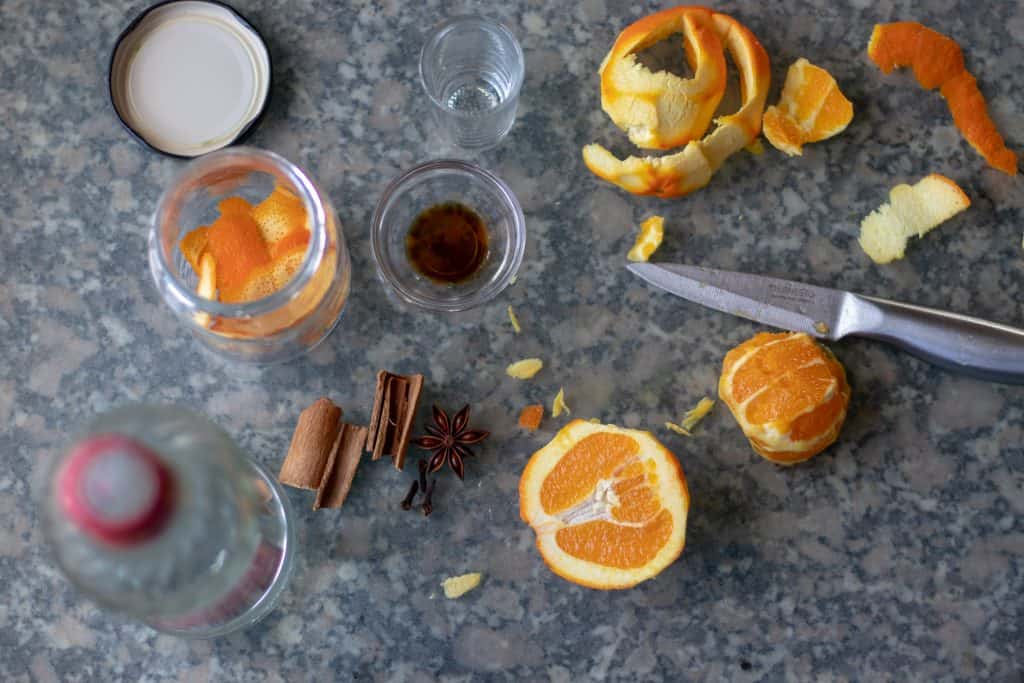 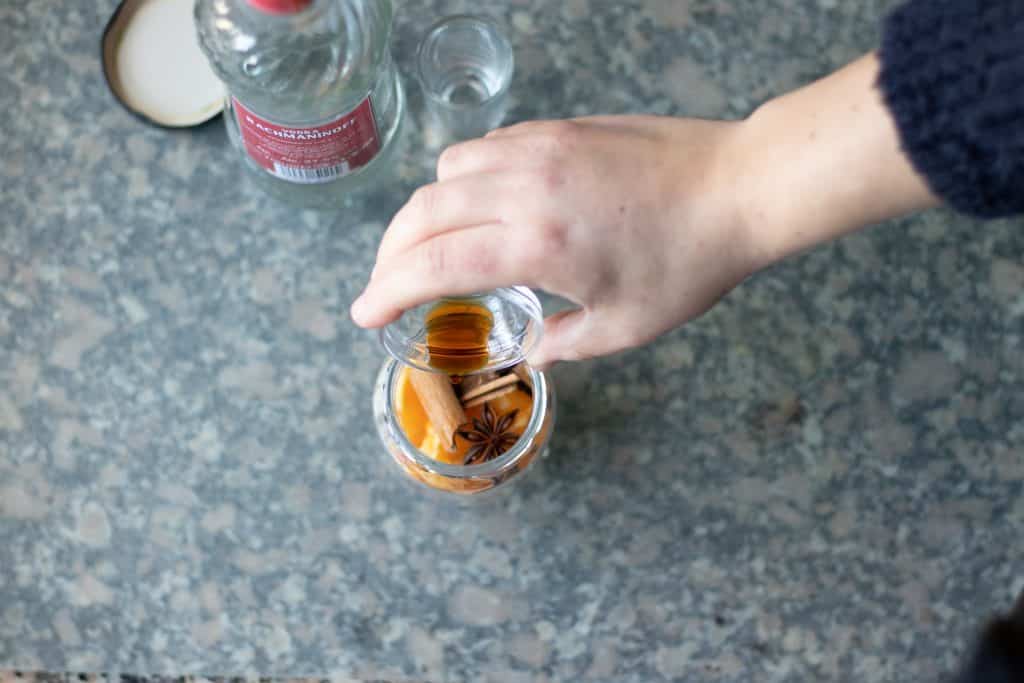 STEP TWO – ADD THE VODKA TO THE JAR 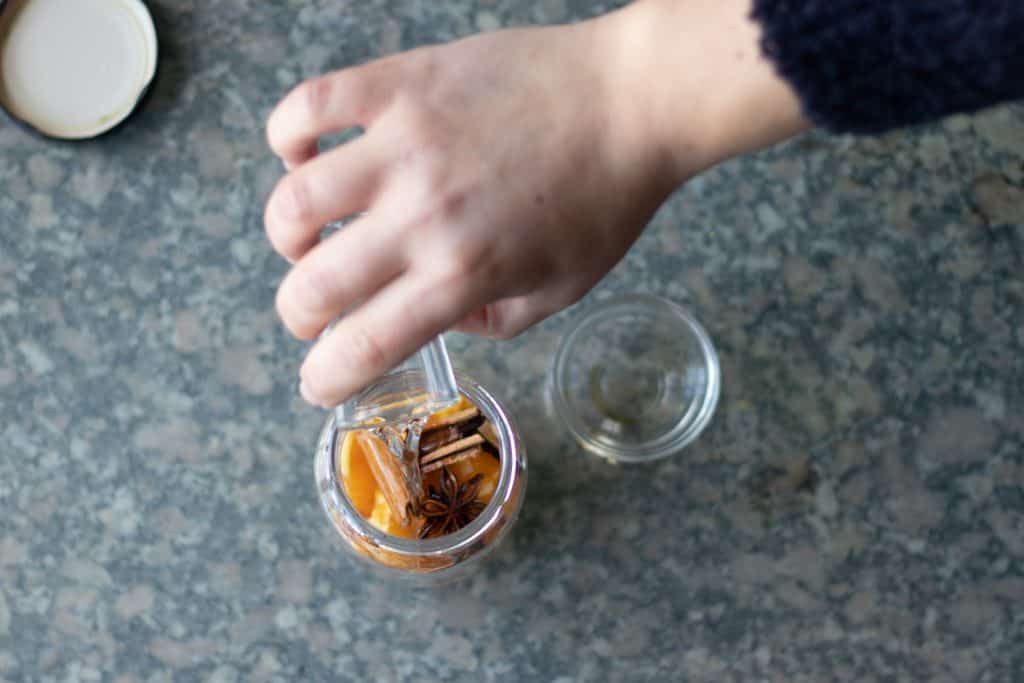 Using a shot glass, pour about 3 glasses full of vodka and add them to the jar with the spices and orange. Put the lid on the jar, but only turn it to let it catch the ridges of the jar, but not seal it. 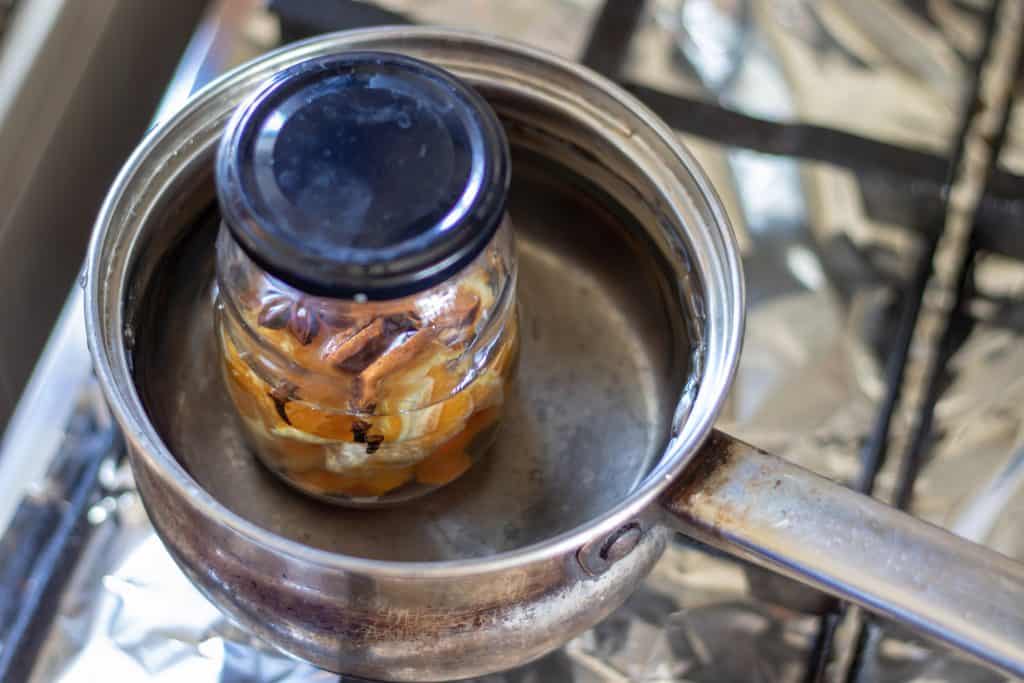 Fill a small saucepan to about halfway with water. Place the jar in the pan so that the water rises on the outside to approximately the same height as the liquid inside of the jar. If it’s too high, remove some of the water and check again. Loosen the lid to make absolutely sure it is NOT sealed. Turn on the burner to medium-high and wait for the water to come to a simmer on the outside. 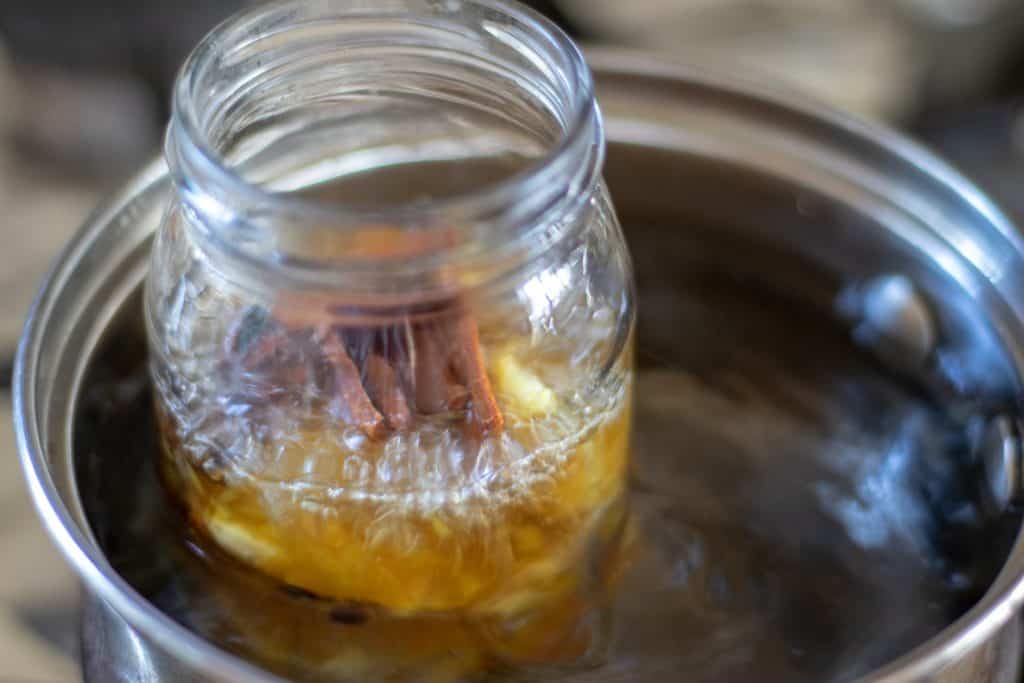 As the water in the pan comes to a simmer, the vodka inside the jar will start to simmer and then come to a low boil. Carefully remove the lid as it starts to boil. The water on the outside should only simmer, never boil. Let the liquid inside the jar boil slowly for about 10 minutes. Turn off the heat and allow it to cool about 5 minutes. 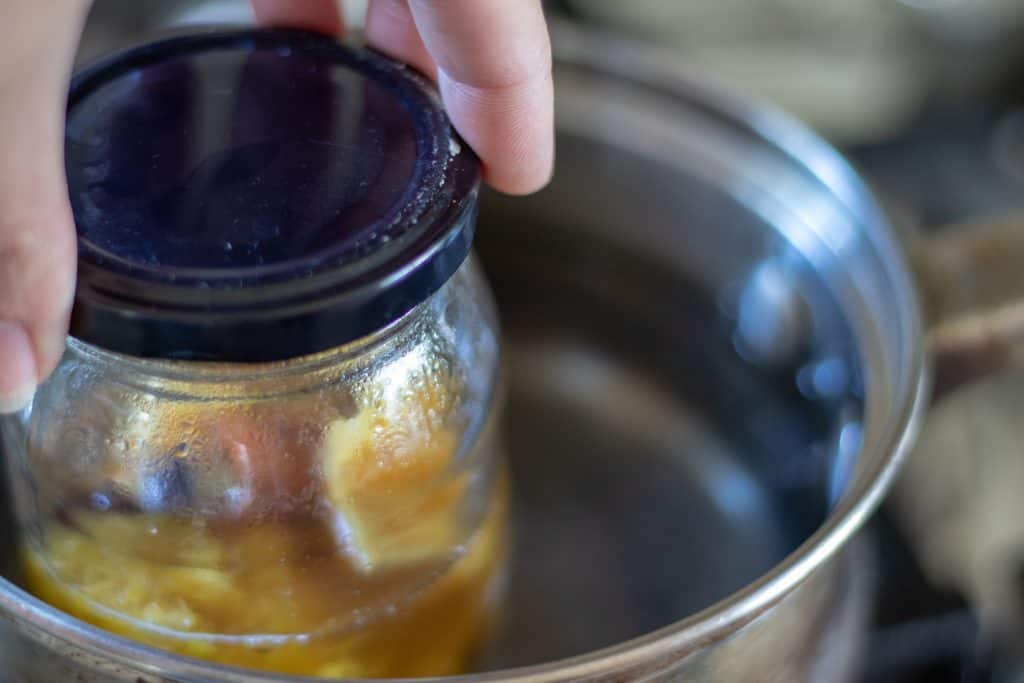 Return the lid to the jar and turn it once so it firmly catches the ridges of the jar.

Use the lid to lift the jar out of the hot water without burning your fingers and move it to a hot pad to rest on. 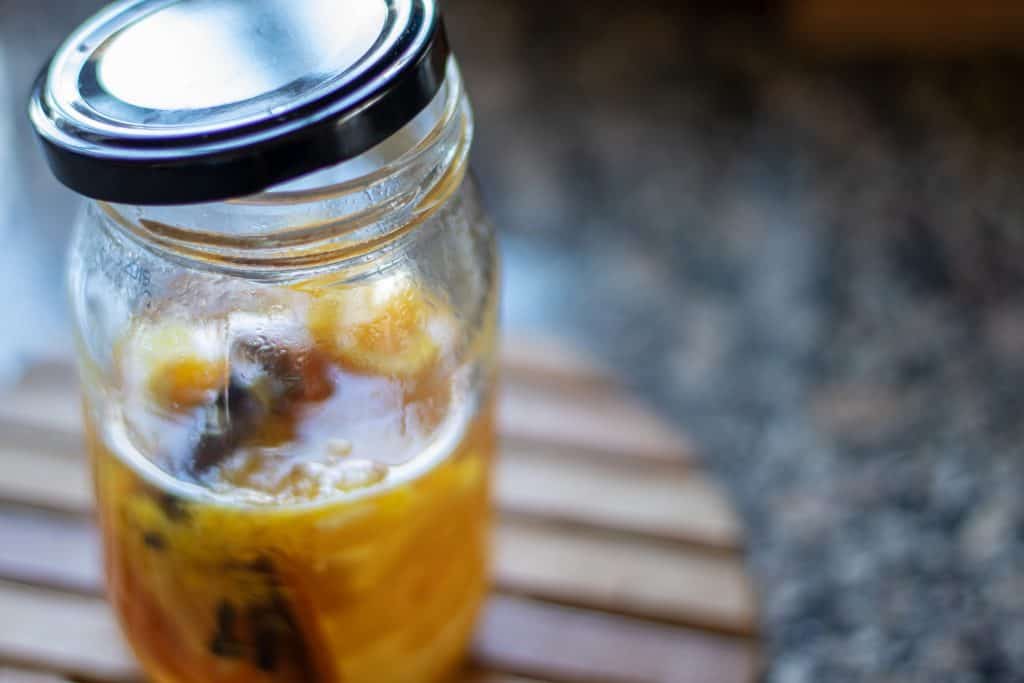 Alternatively, if you have canning tongs used for canning, use those instead. Remove the lid and leave it askew on the top of the jar to let the bitters cool completely. 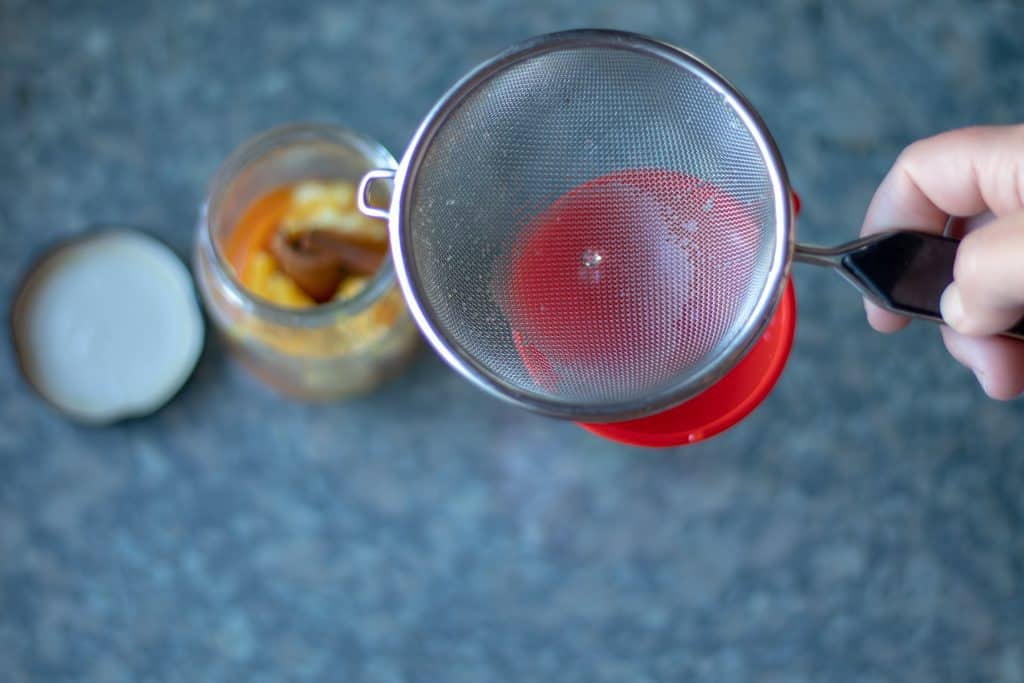 Remove the lid completely from the cooled bitters.Place a funnel in the neck of a small jar and place a strainer over the funnel. Pour the bitters into the strainer to remove the solids from the bitters. 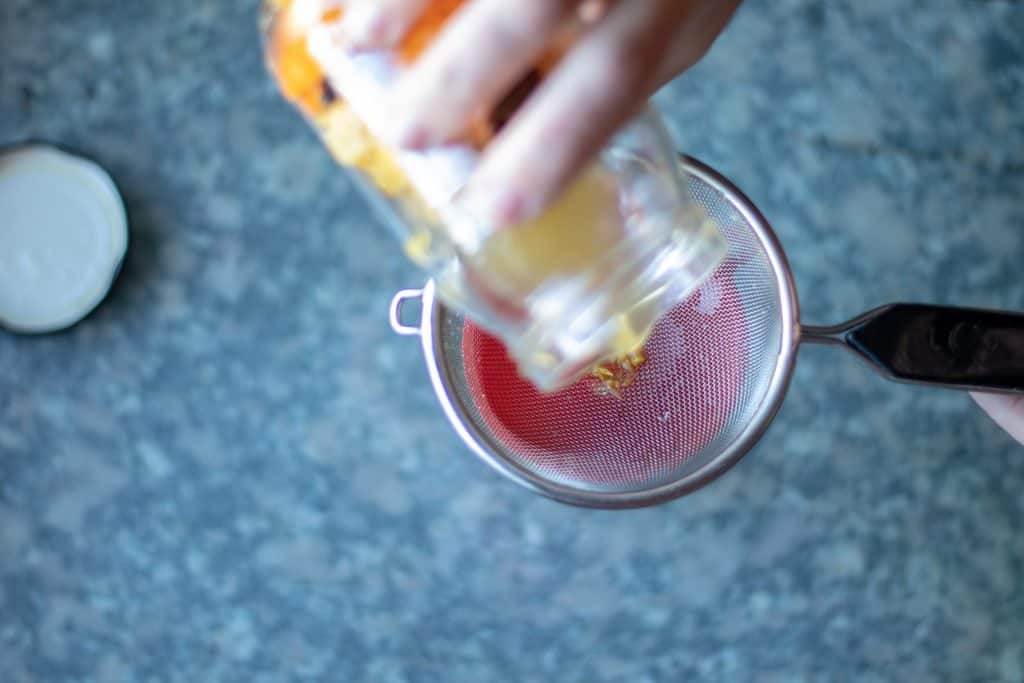 Close the jar with a lid that fits. This will stay good for a couple of weeks in the refrigerator.

Pour two shot glasses of whiskey and pour it into a cocktail shaker. 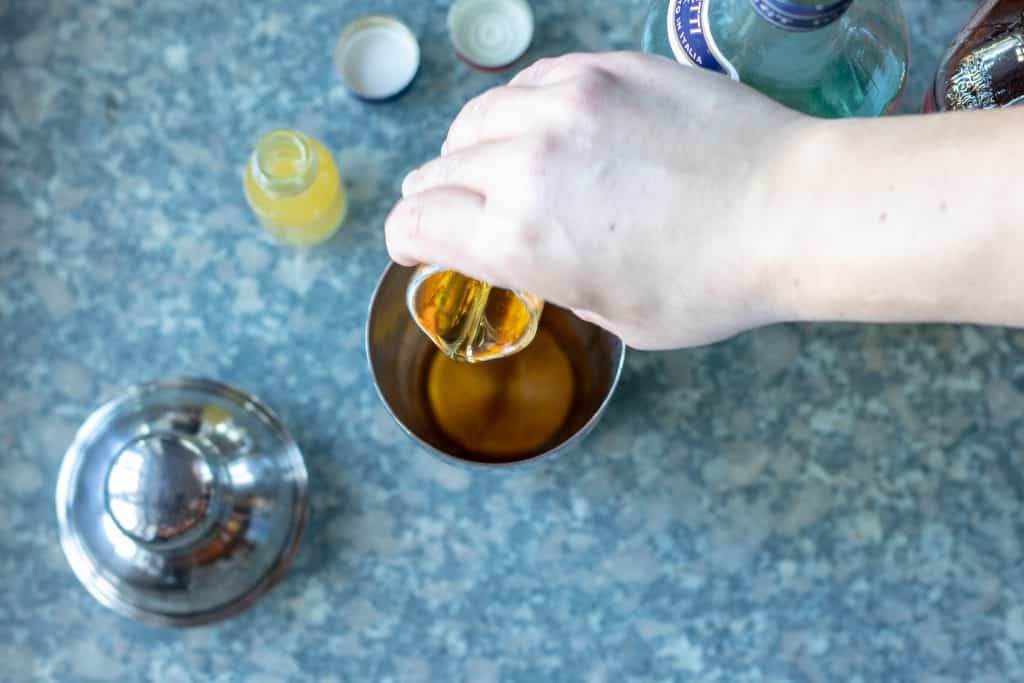 Add a shot glass of vermouth and two or three drops of the homemade bitters. 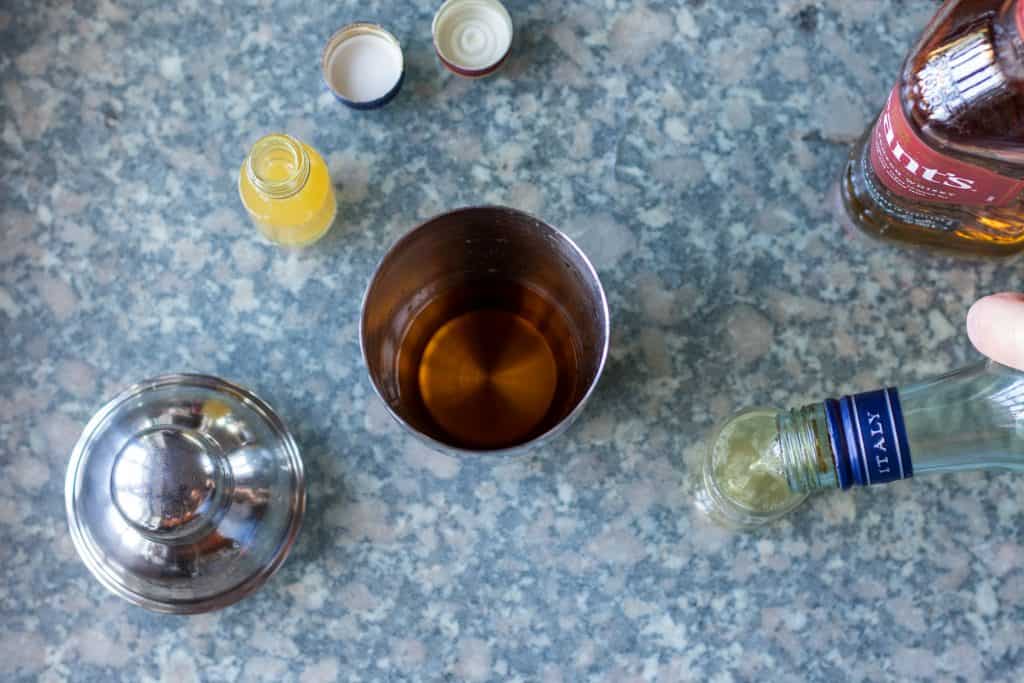 Add a handful of ice. 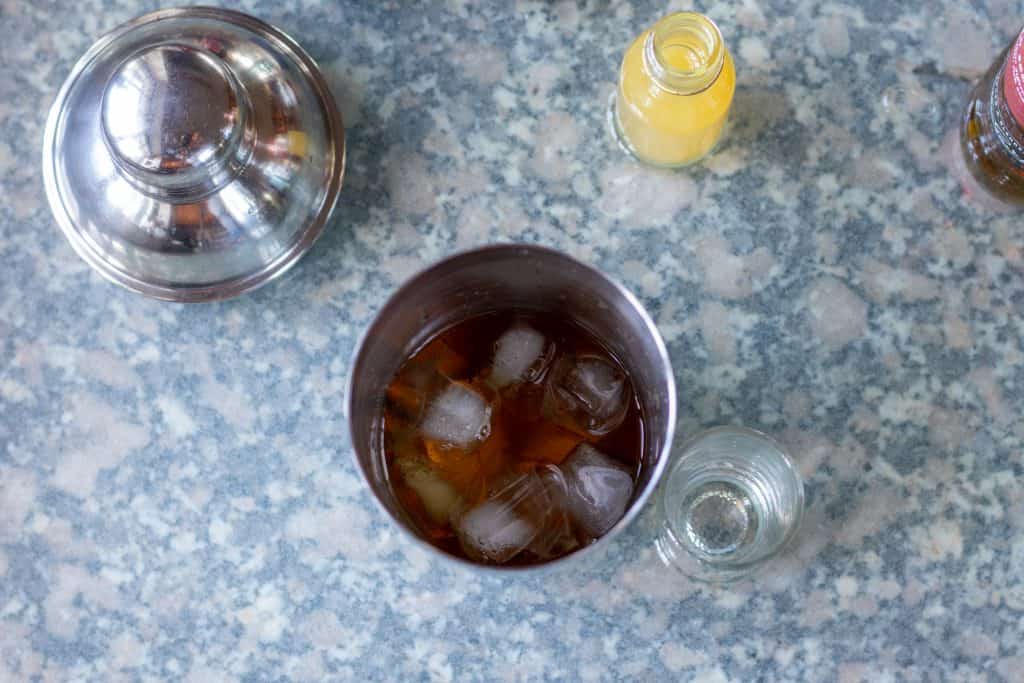 Put the lid on the shaker and, while holding the lid closed to the shaker, shake the alcohol well. 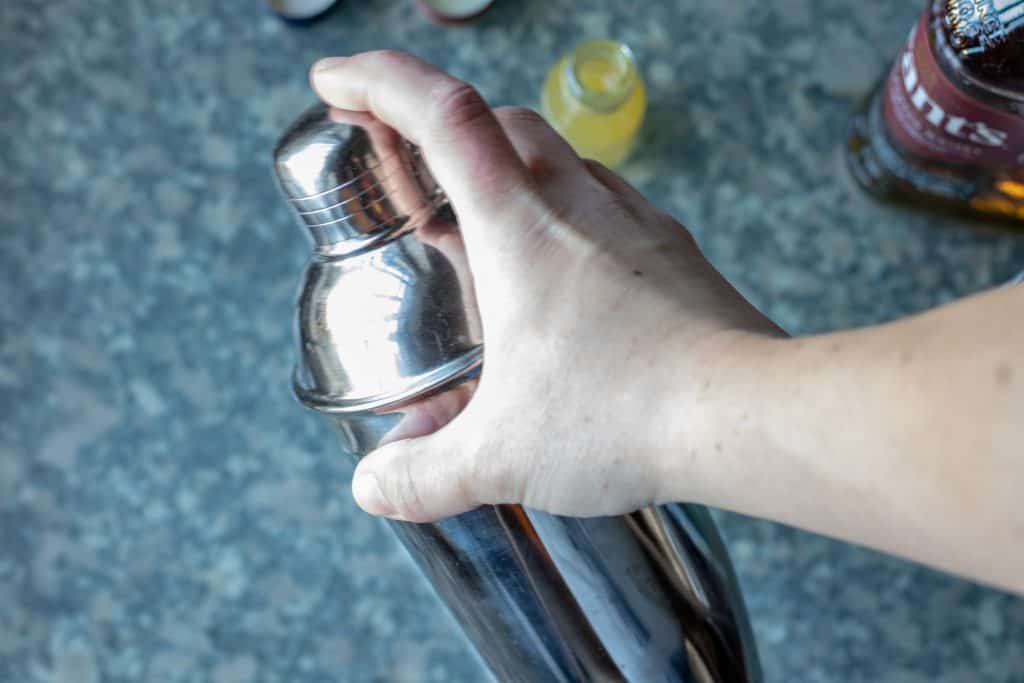 Pull the little top lid off of the shaker and strain the drink into a cocktail glass. 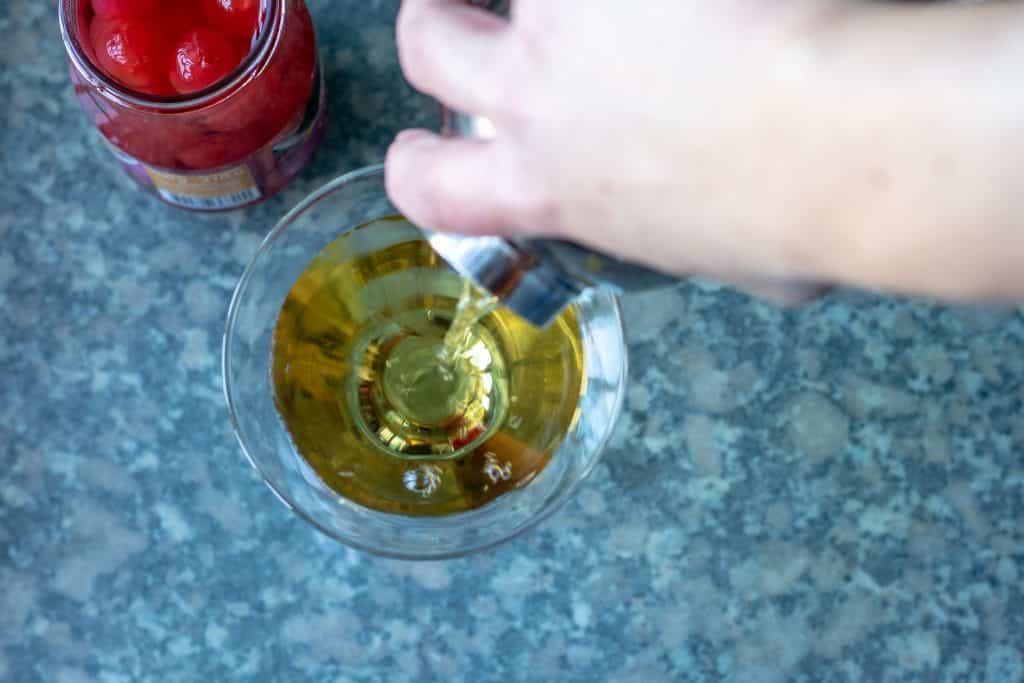 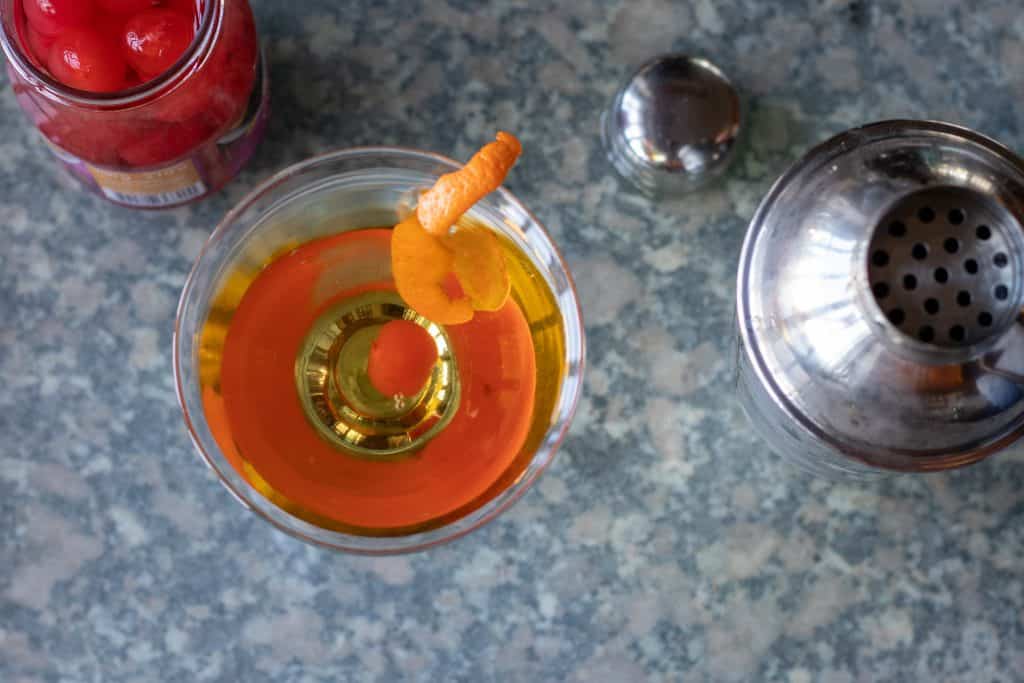 Drop a maraschino cherry into the cocktail and add a twist of orange peel to the side and serve! 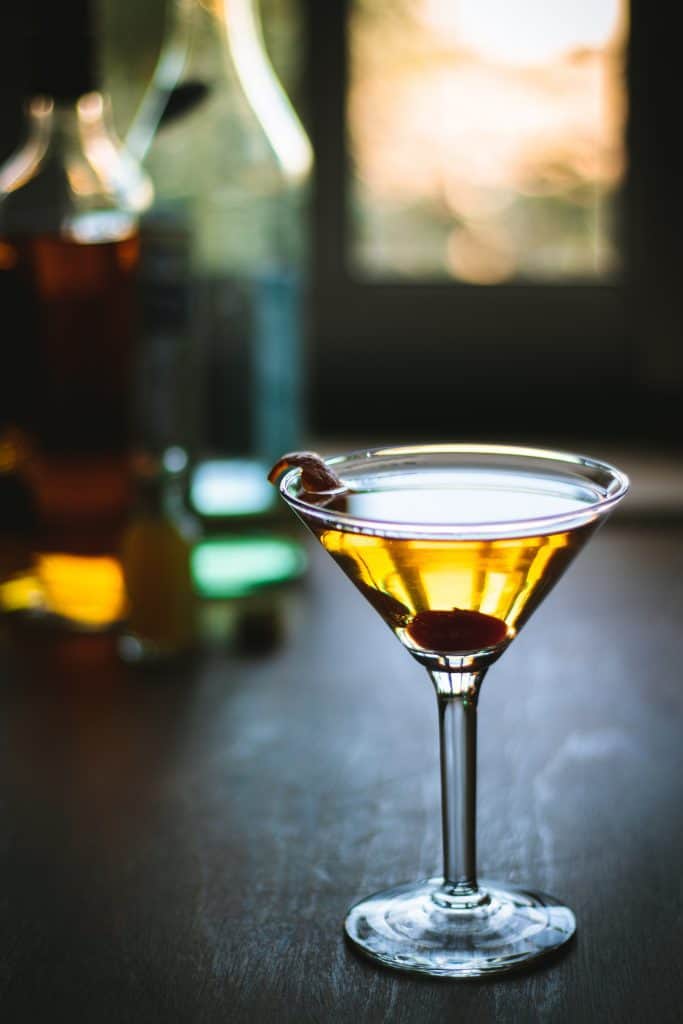 The Manhattan cocktail is a classy drink that may seem like it has to be reserved to a nightclub or for those with access to extravagant ingredients, but as you can see, it’s quite simple really, and just a quick bitters recipe away!

What is your favorite bitters recipe? Have you tried the time-honored way of making bitters with the month long process? How do you do your favorite Manhattan? We want to hear all about it!