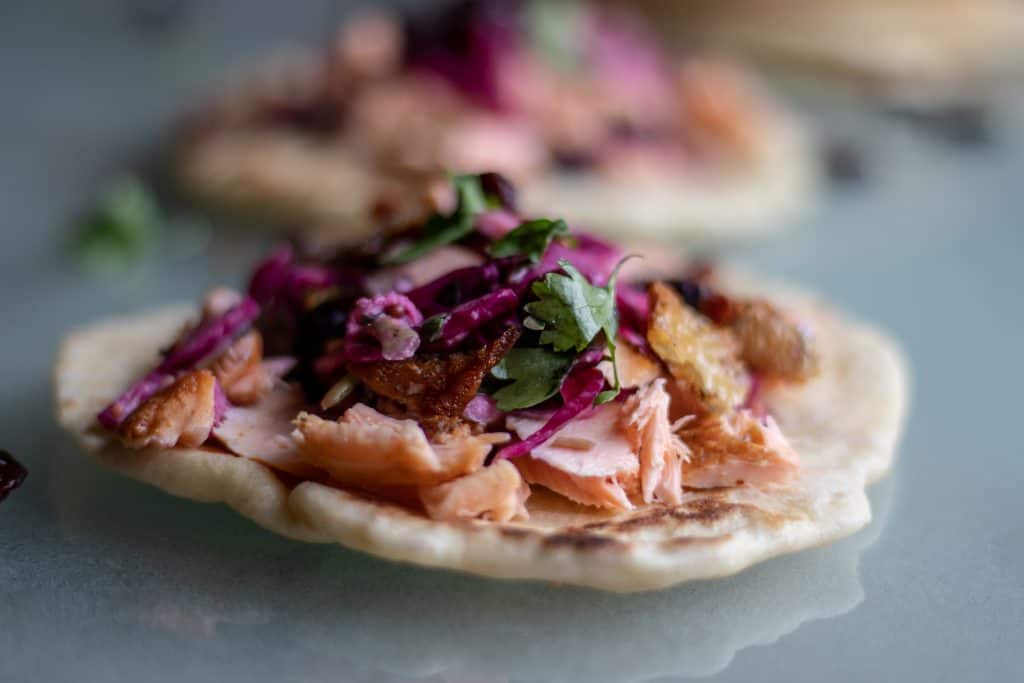 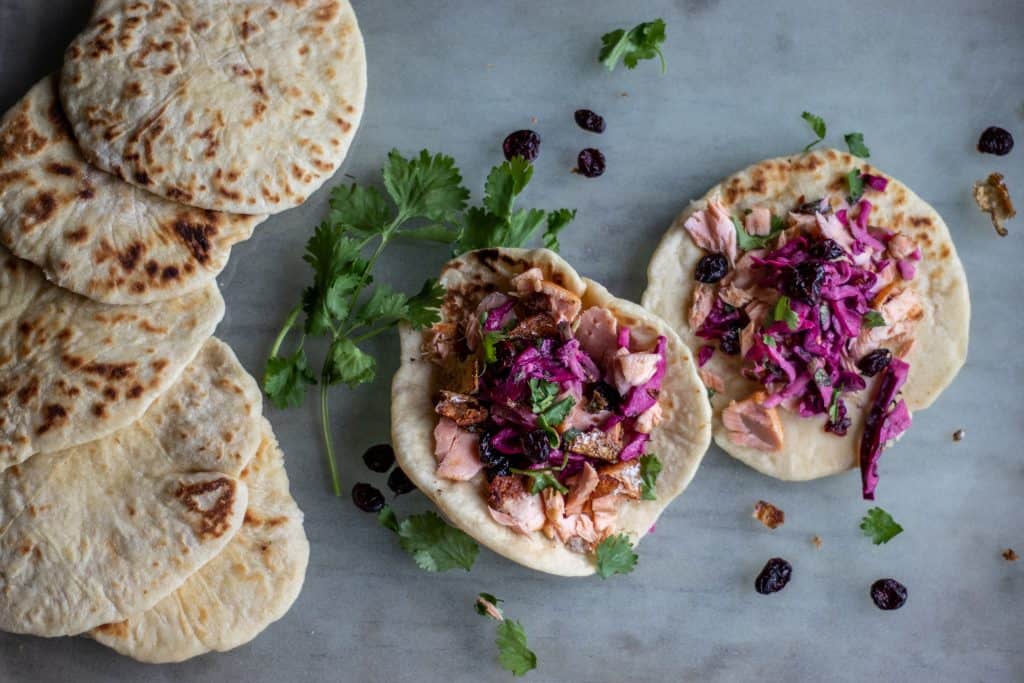 Tacos are the one of the most favored of handheld foods to enjoy year round. Pork, chicken, or beef can be roasted in the oven, tossed into a slow cooker, sautéed on the stove top, or grilled and become a taco no matter what the date shows on the calendar. Fish tacos contrarily, I’ve found, are often restricted to summer regardless of preparation, be it off the barbecue or served with a fried golden crust and then topped with a crunchy slaw.

These fish tacos, on the other hand, contain the essence of summer but are the product of a craving acquired during chillier months. Salmon, rich with fat, requires no batter or a pool of oil to fry in to become protein worthy of comfort. The crunch of red cabbage and sour green apple produce a crisp seasonal accompaniment to the salmon that beautifully cuts the rather oily fish that, while pan seared, still requires something to mellow it down before it becomes excessive. And, let’s be honest, no one can only have one taco without feeling a bit deprived!

That cabbage and apple slaw is not just to cut the fat. It balances the strong flavor of the salmon by making it have a tang and subtle warmth that has nothing to do with the element of fire. A squeeze of lime forces the cabbage to soften while adding a sour element; honey and mustard add a hint of earthy spice with concentrated sweetness, and a large dollop of yogurt to add creaminess while keeping the freshness intact. Green cilantro leaves and the one thing that, in my opinion, pulls all those flavors together; a peppering of sweet and sour dried cranberries finishes it off.

Folded around all that deliciousness is what puts this in the category of “taco”; warm, soft, freshly homemade wheat tortillas. Traditionally tacos are made with corn tortillas, but too often the proper masa harina can prove to be rather elusive to come by. However, while a corn tortilla is delicious, I don’t think that means you should have to deny yourself, and others, a delicious taco. I make these tortillas just to eat them, they don’t even have to be a vehicle for other foods for me to enjoy.

If that doesn’t pique your hunger, and inspiration, for these fish tacos, I don’t know what will! 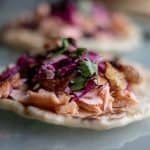 Don’t skip the cranberries! It changes the entire taste of the slaw/salmon combo.

The salmon skin can be left out, but if you’re the adventurous type, it can give a satisfying crisp crunch.

Corn tortillas can be substituted for the wheat ones made in this recipe if they are preferred.

STEP ONE – MIX DOUGH FOR TORTILLAS

Whisk the flour, baking powder, and salt in a bowl. 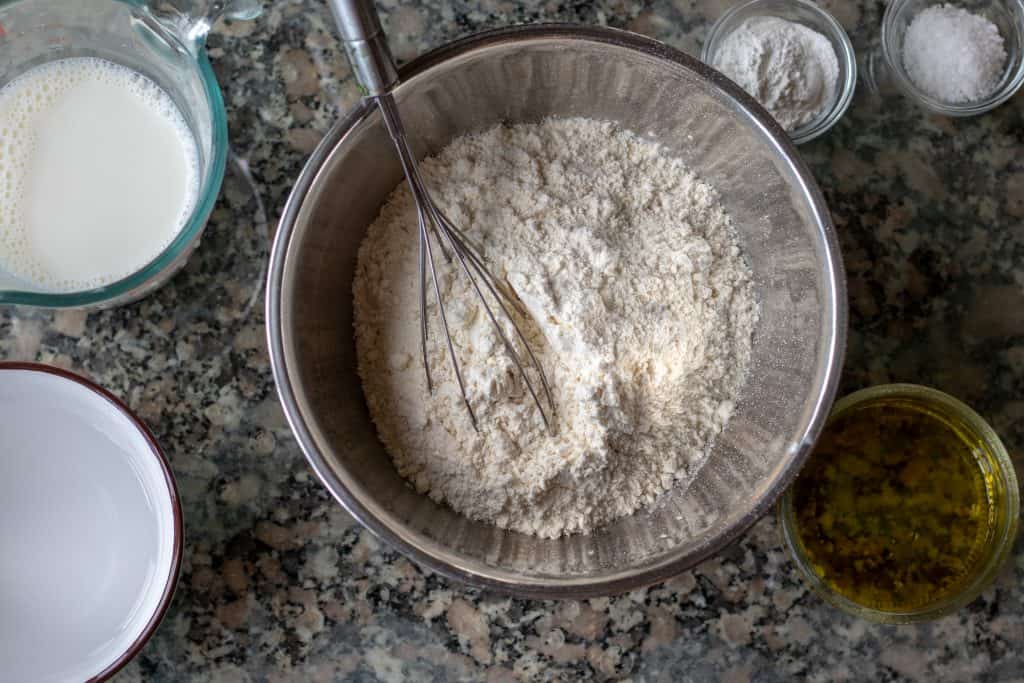 Form a well in the center and pour the olive oil and milk into it. 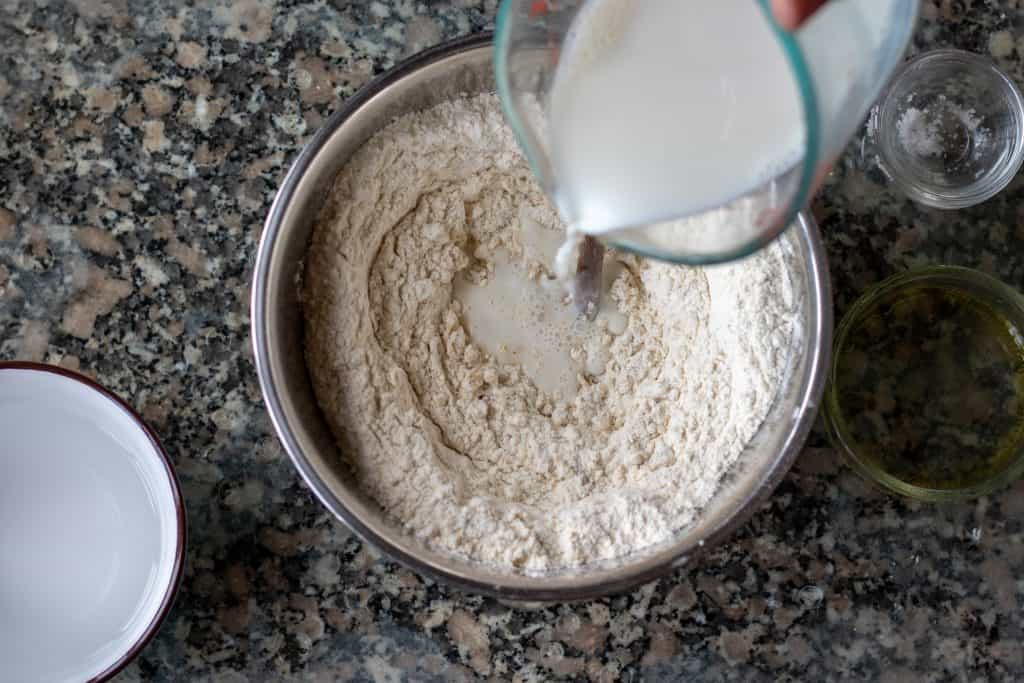 Using the handle of a wooden spoon, start stirring the milk and pull the flour into the middle at the same time. Stir until a ball forms, adding water or flour to make the correct texture; a firm but sticky ball. 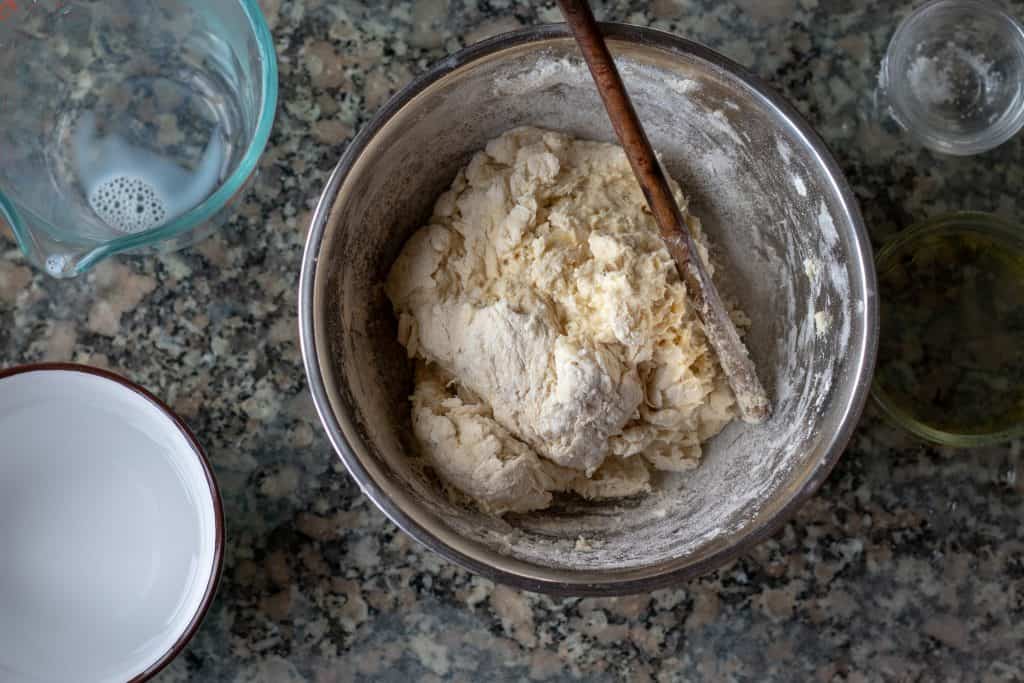 Sprinkle flour on a cutting board and turn the dough out onto it. 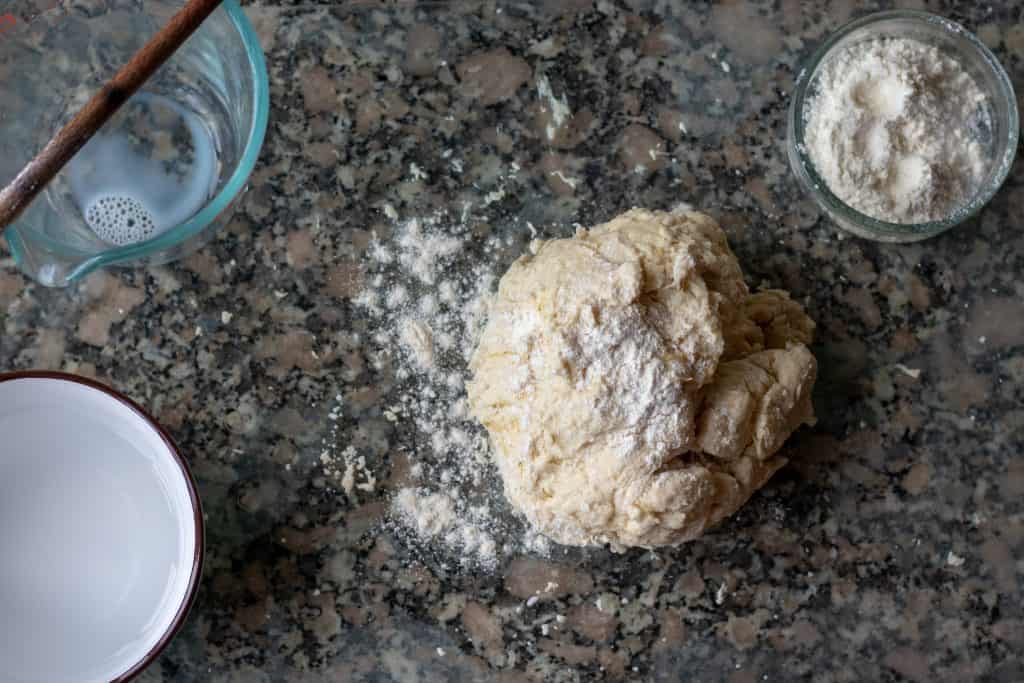 Flour the top a little before kneading the dough for about 5 minutes until it becomes a smooth ball. 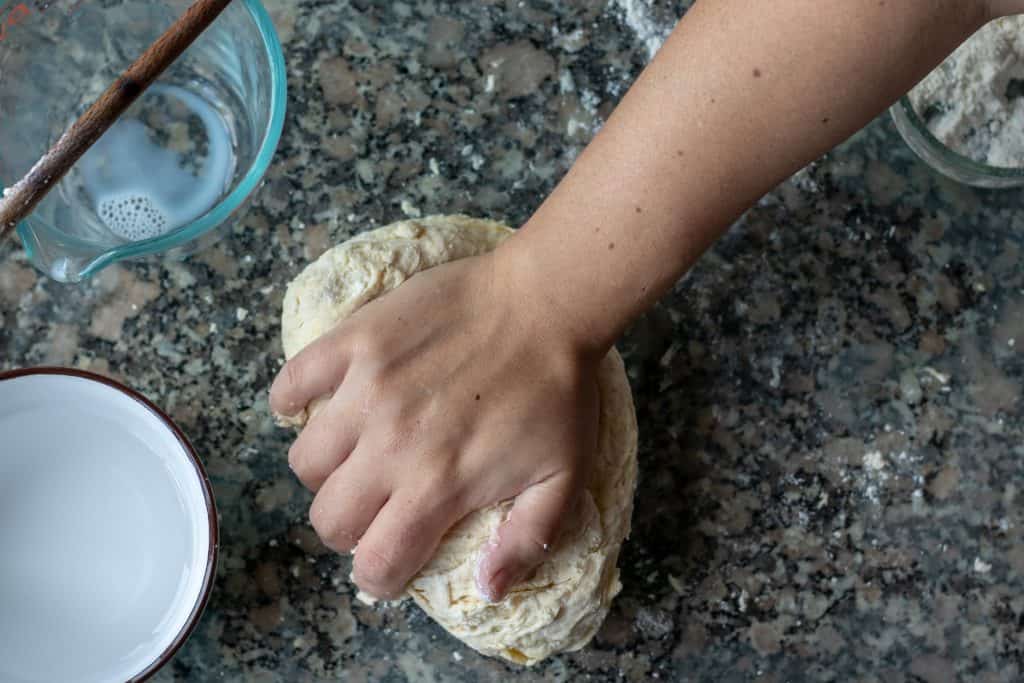 Return the ball to the original bowl and cover it with a damp cloth to rest for 30 minutes. 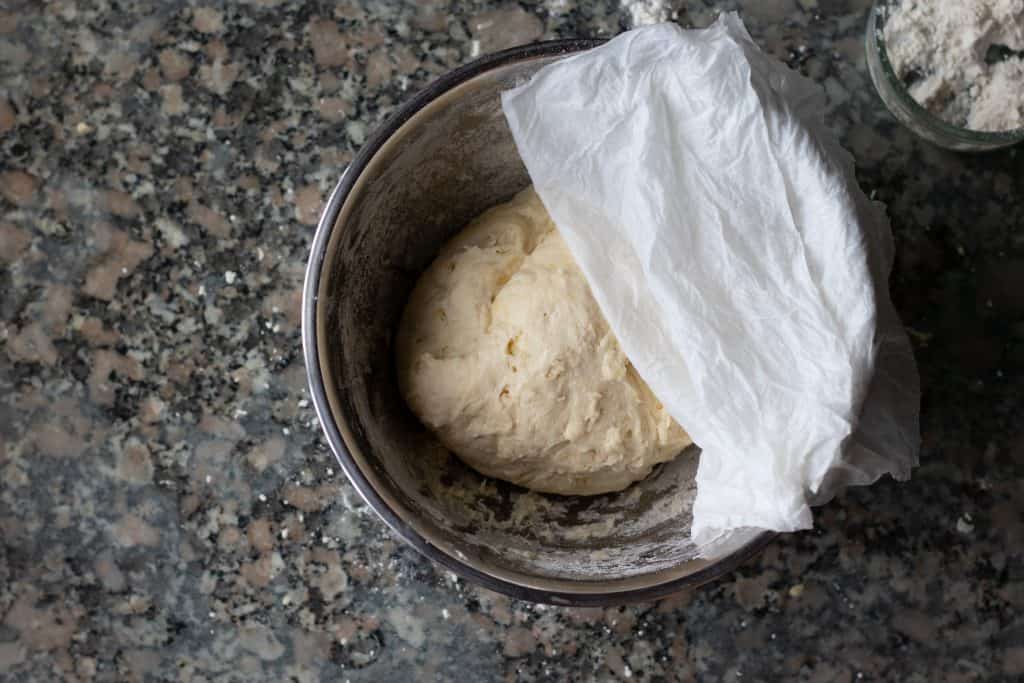 Turn the dough out onto a cutting board and cut it into 12 equal pieces. Roll each in between the palms of your hands to form small balls of dough. 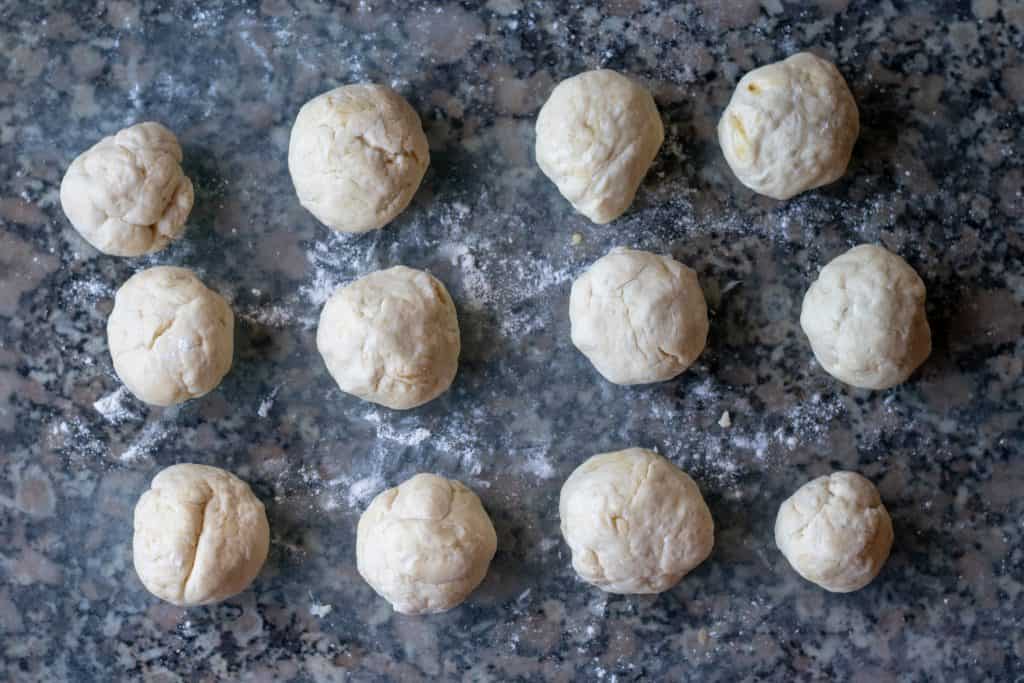 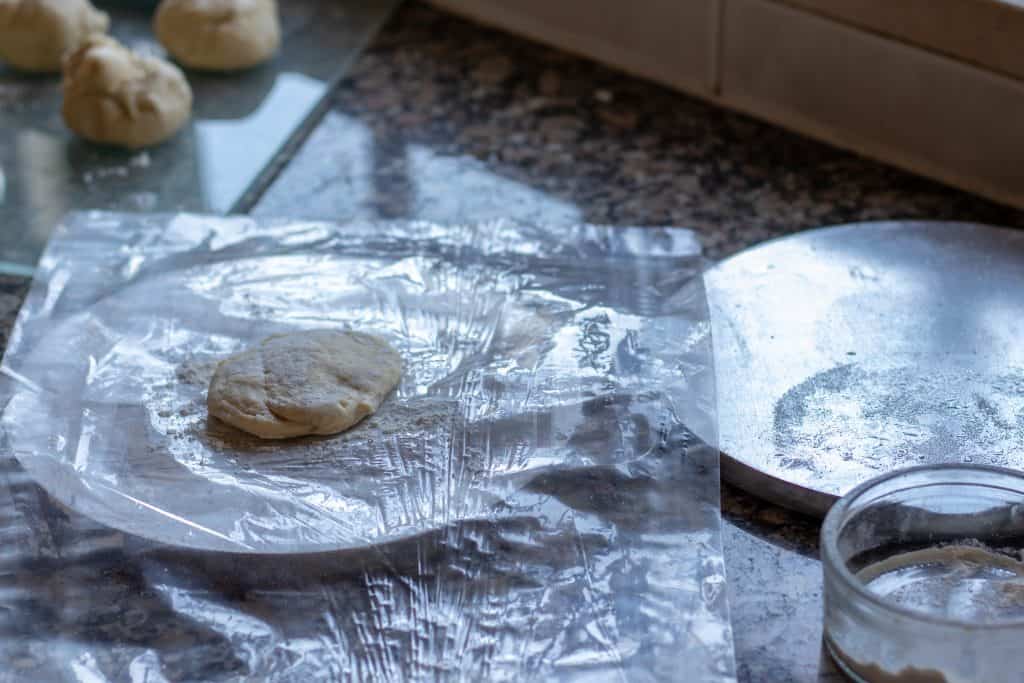 Remove the tortilla from the press and roll again with a rolling pin if needed to make the desired thickness. 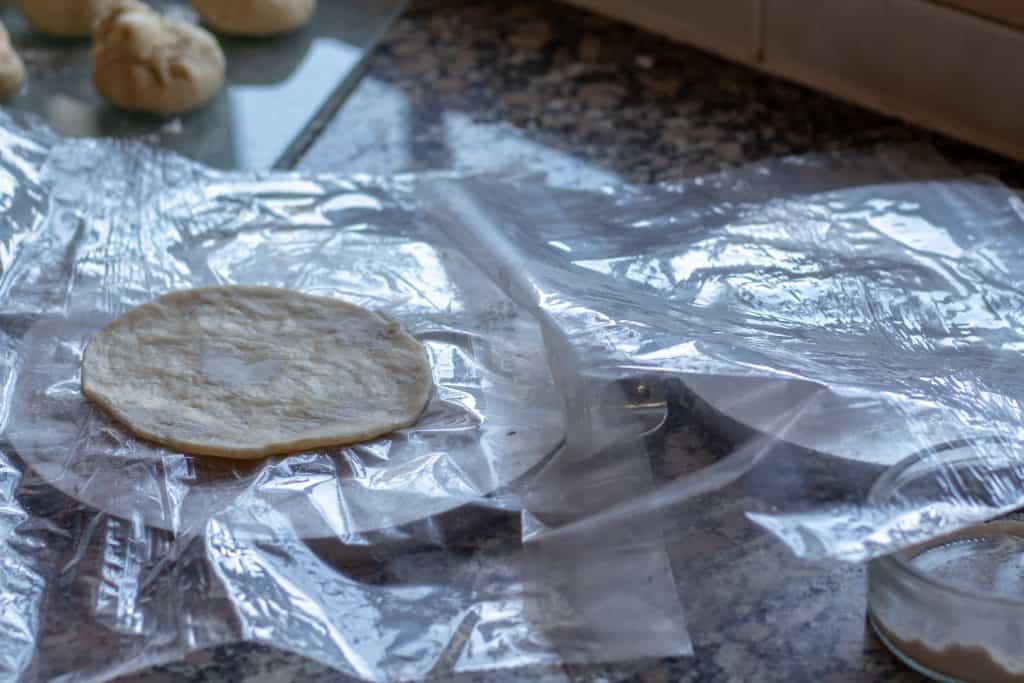 If using a rolling pin, lightly dust a flat surface with additional flour and roll the dough out into a circle. 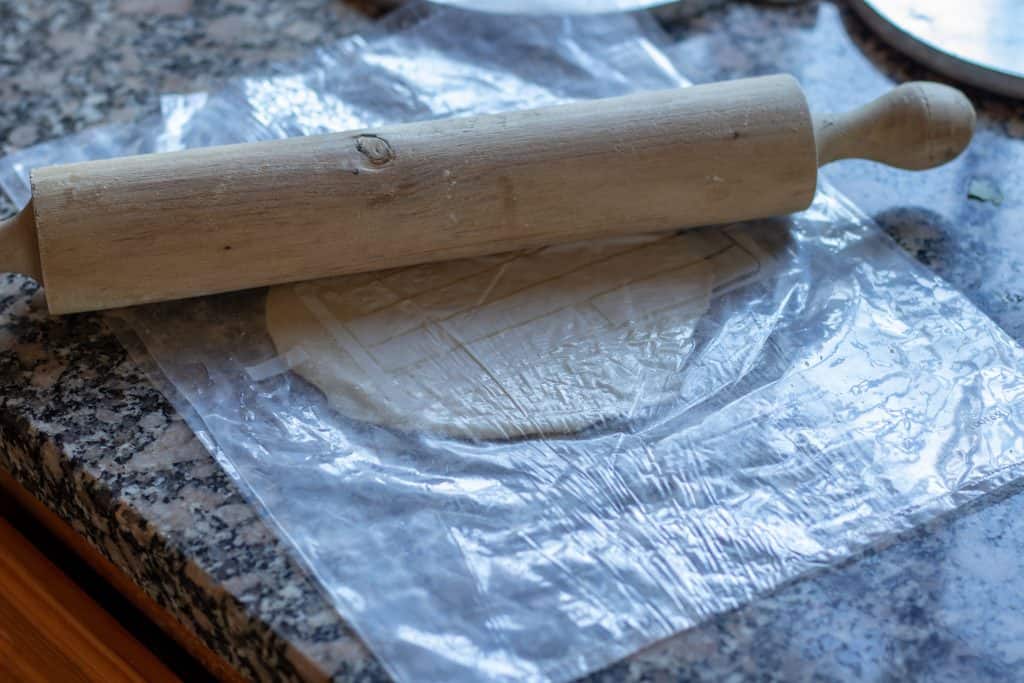 Heat a dry non-stick pan or griddle over medium heat and lay a flattened tortilla on it. Let it cook about 1 minute and turn once bubbles have formed. 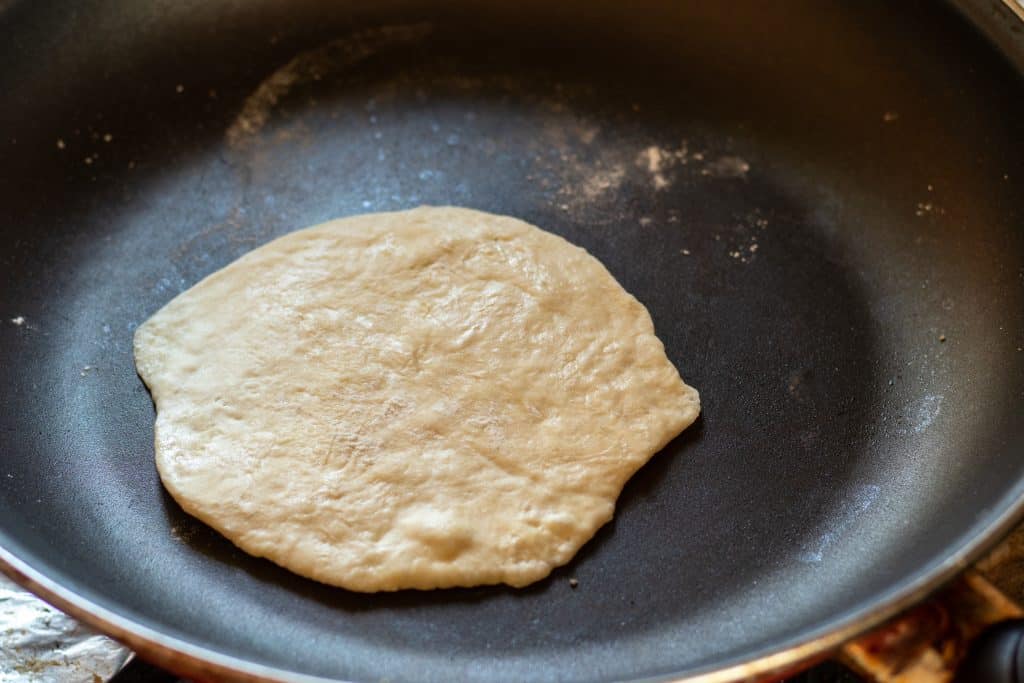 Cook the other side another minute and transfer to a plate and cover with a very lightly dampened cloth to keep them warm and soft while cooking the rest of the tortillas. 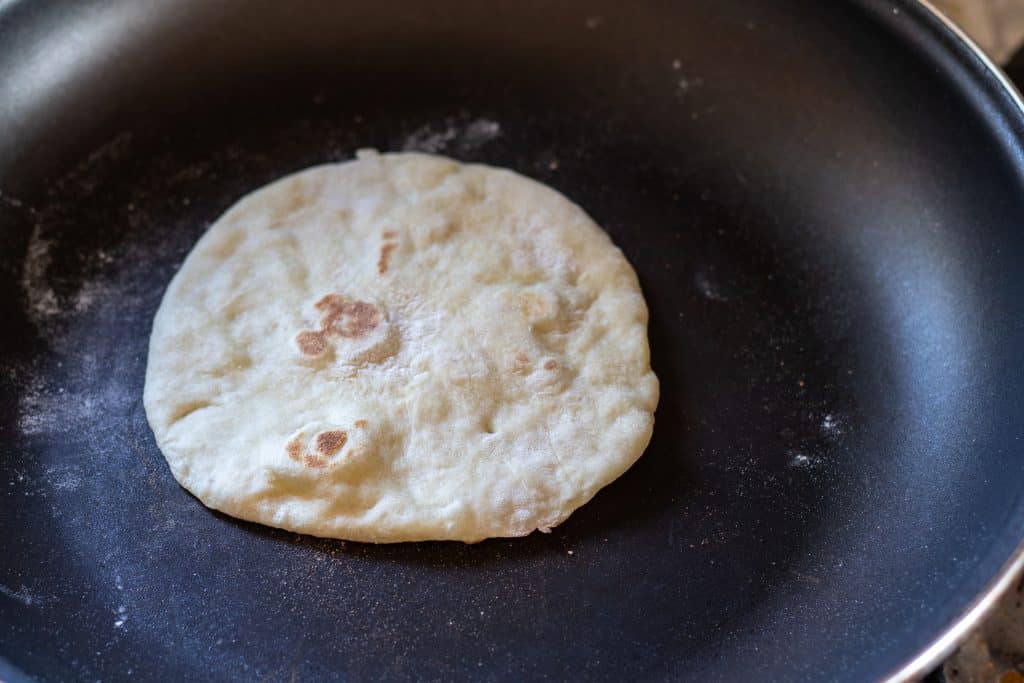 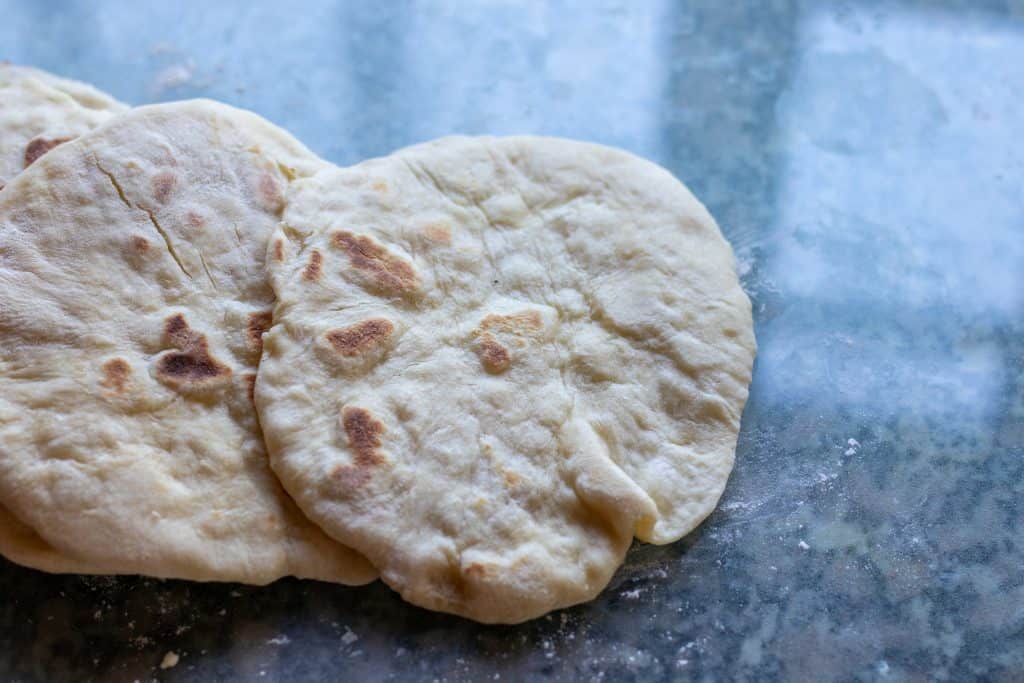 On a clean cutting board, thinly slice the cabbage and shred the apple on a grater down to the core, which then needs to be discarded. Lay the cilantro on the cutting board and roughly chop it with a chef’s knife. Put them all into a bowl. 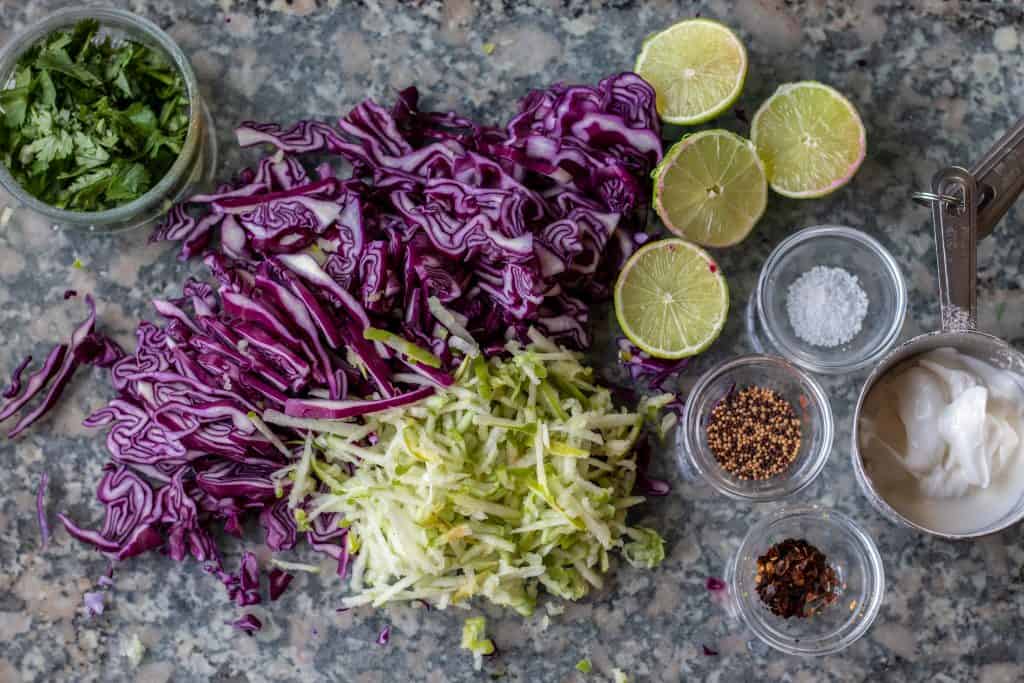 Add the mustard seed, yogurt, and salt to the bowl and mix. Cut the limes in half and squeeze the juice from each into the slaw. 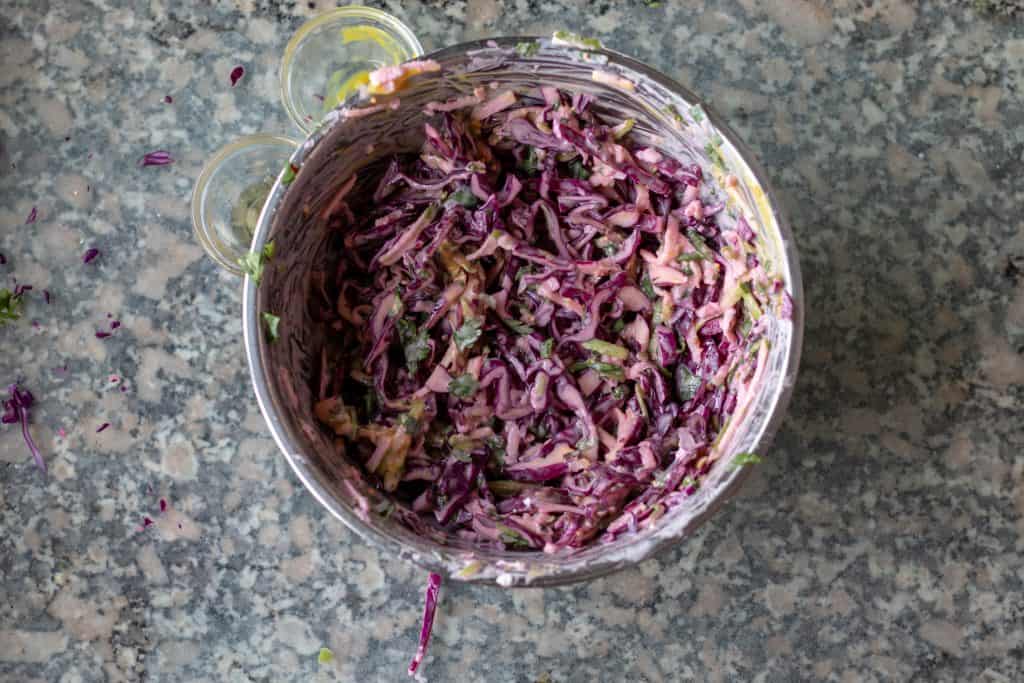 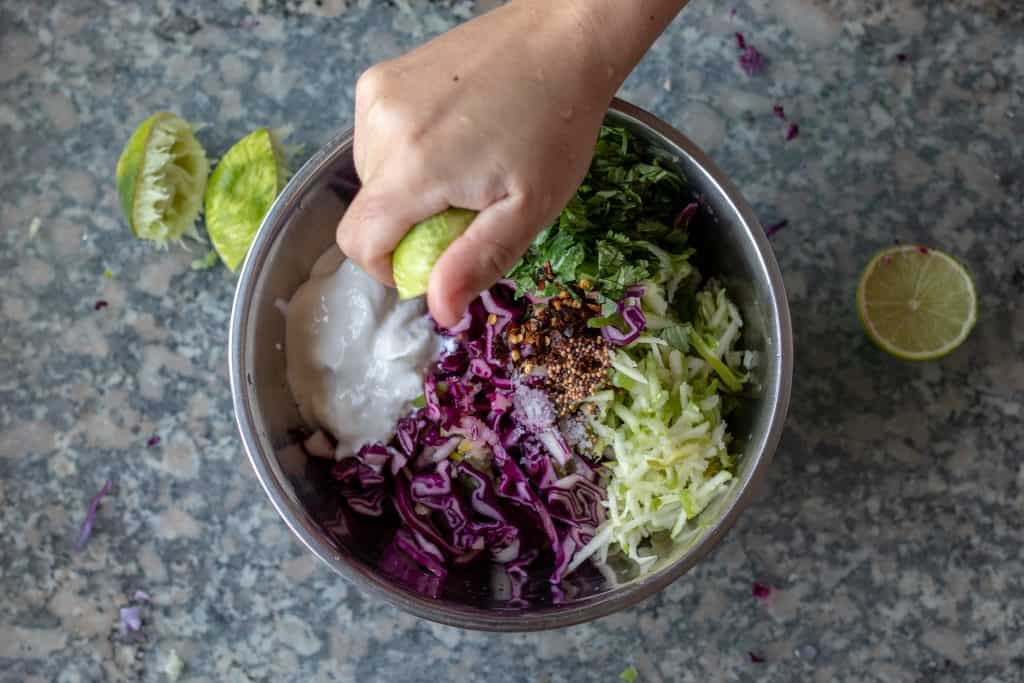 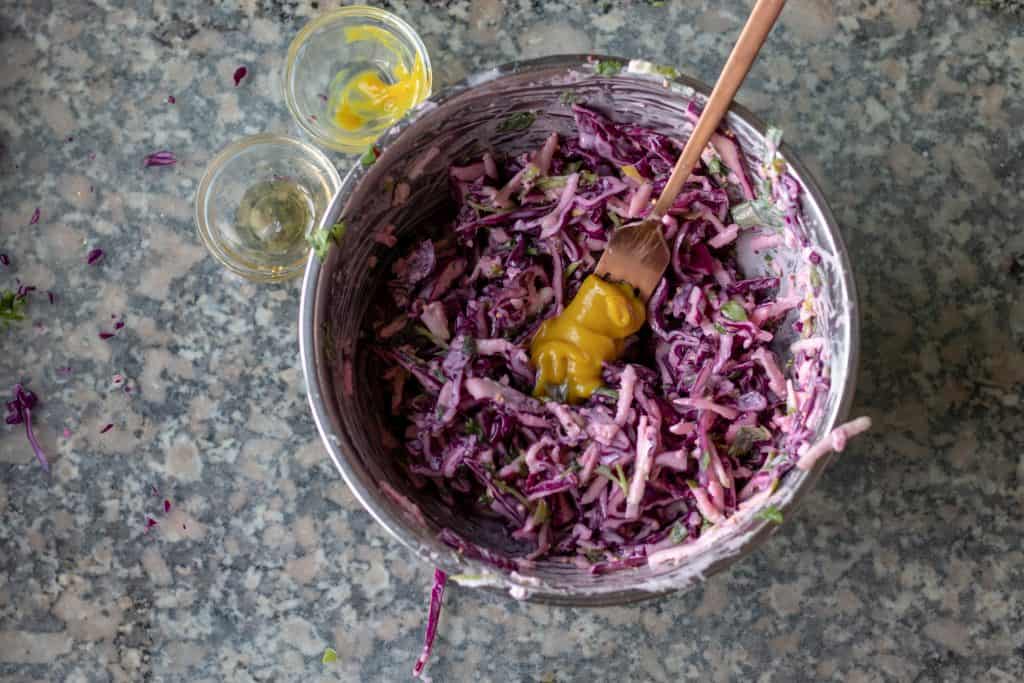 Add the honey and the mustard and mix them in as well. Cover the bowl and refrigerate until ready to use.

Lay the salmon on a clean cutting board, skin side down. Dab each filet with a paper towel to remove moisture so they’ll brown and crisp nicely when cooked. 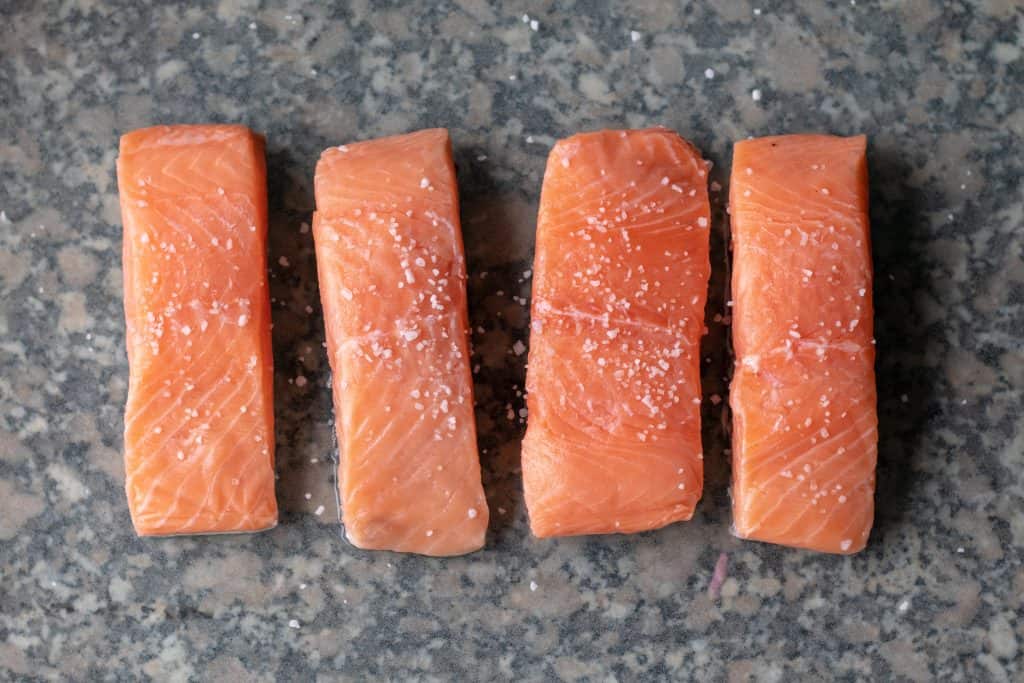 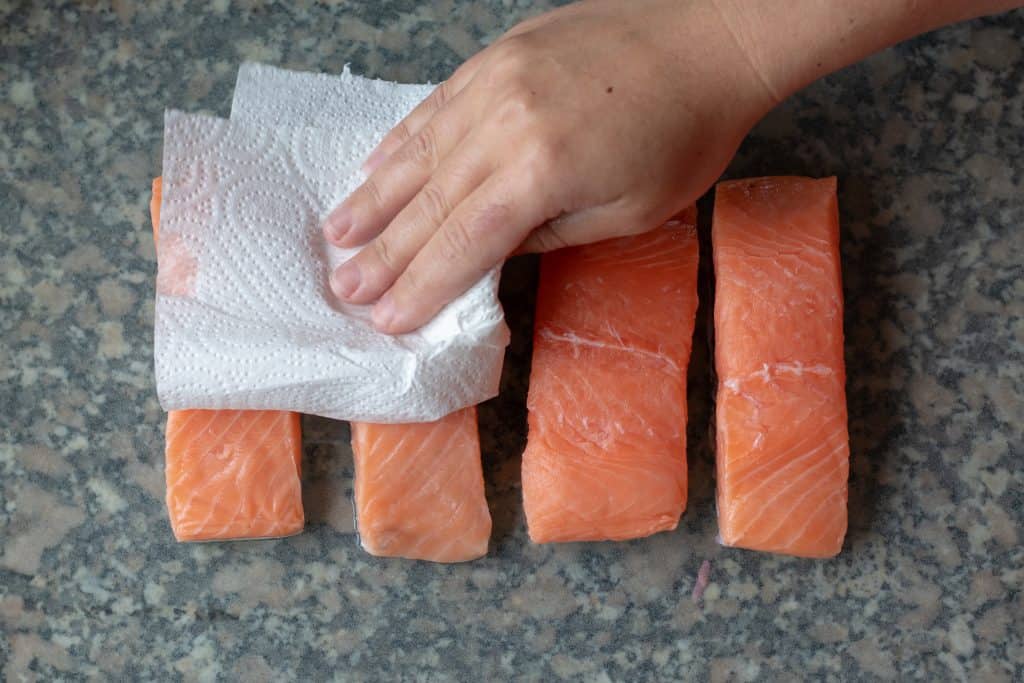 Sprinkle salt on each filet.

Heat olive oil in a clean non-stick pan over medium-high heat. Once the pan is hot, add the filets to the pan in a single layer, skin side down, and allow them to cook about 3 minutes. Turn the salmon over and cook the other side for another 4-5 minutes. 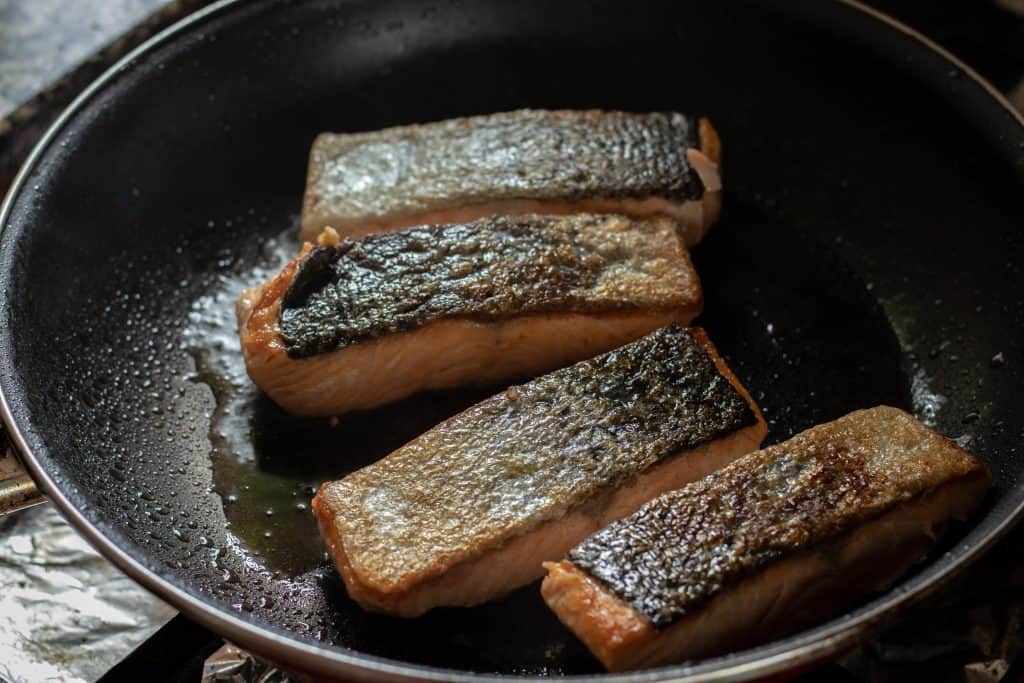 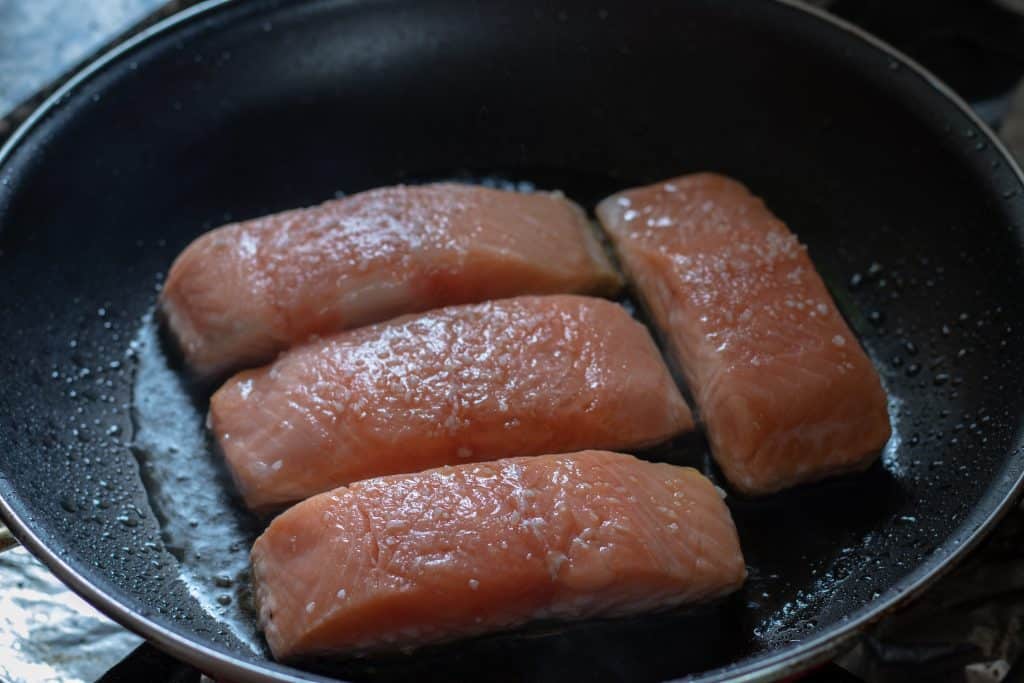 If the skin hasn’t become firm and crisp, turn the salmon over and cook another couple of minutes.

Turn the salmon so its skin side up and gently slide the tip of a spatula in between the meat and skin. Lift up to pull the skin off of the salmon and place it back into the pan, brown and crispy side up to let the other side crisp as well. Check the rest of the salmon for doneness; it should be a light pink and firm with no darker pink in the middle.  Transfer the cooked salmon to a clean cutting board. Line the other side of the cutting board with paper towels and place the crispy skin on top to drain off any excess oil. 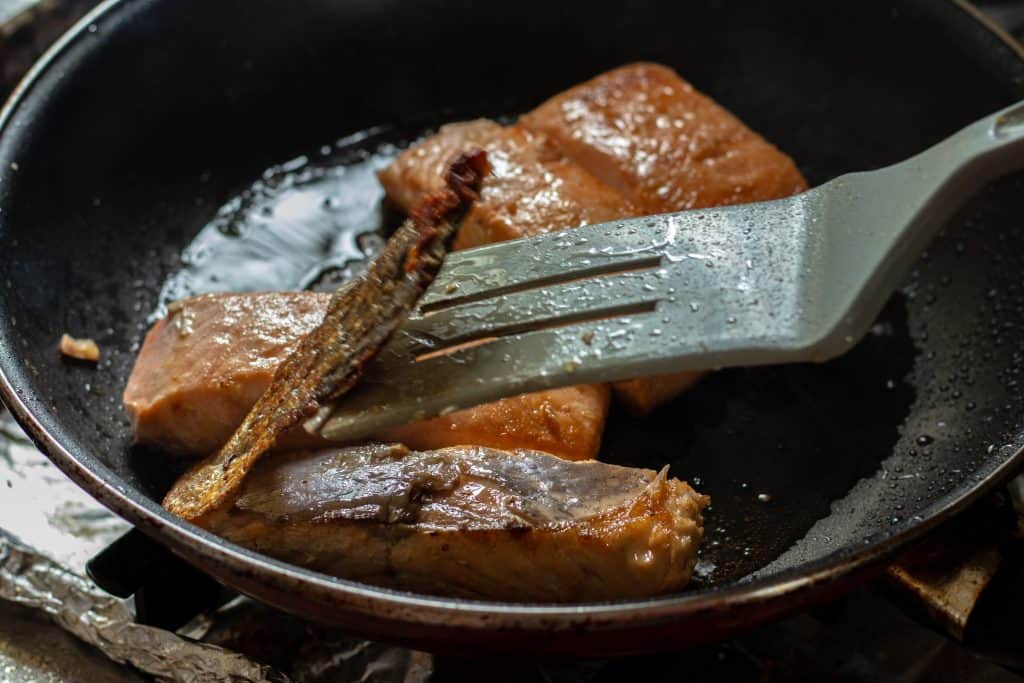 STEP TWELVE – FLAKE THE SALMON AND CRUSH THE SKIN

Using two forks hold down the salmon with one and use the other to pull the salmon apart in flakes. 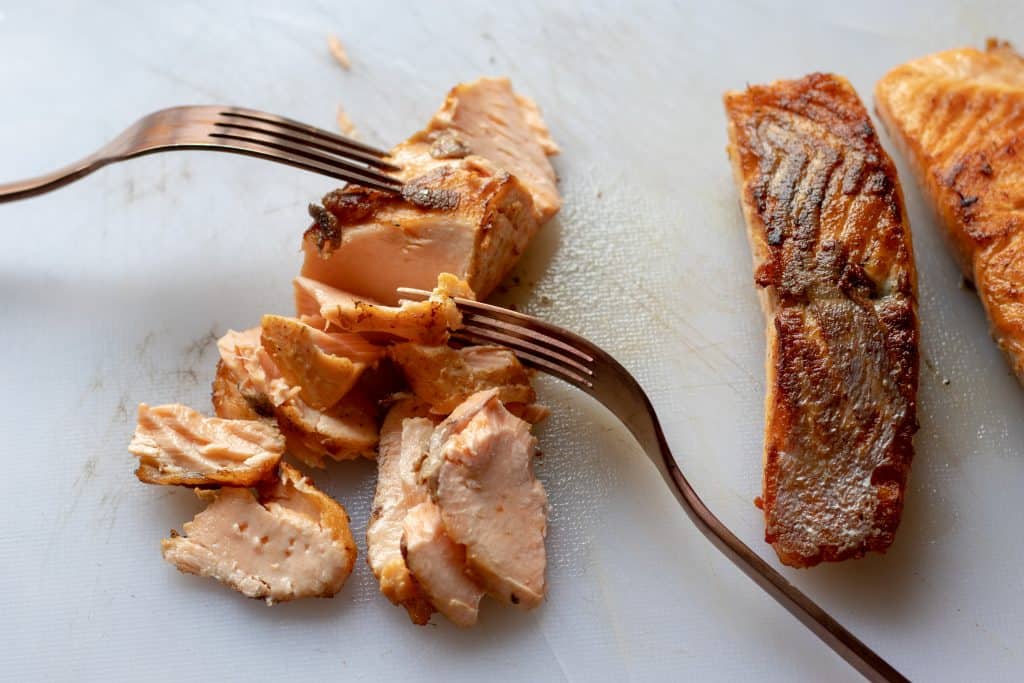 With a paper towel, press down on the crispy skin crush it in to pieces. 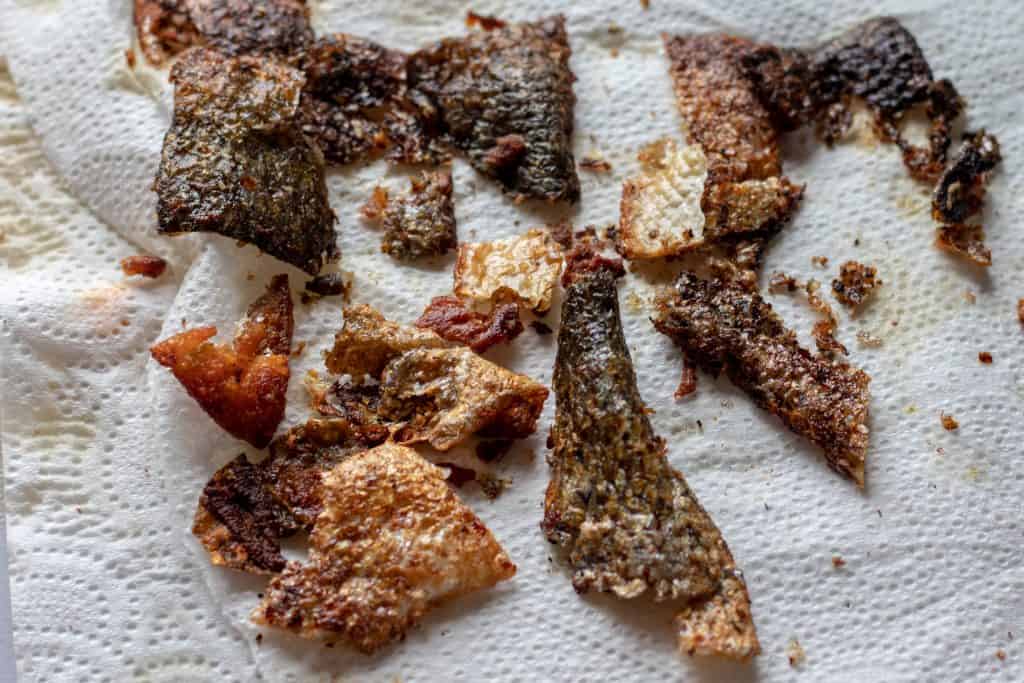 Place a tortilla on a flat surface and top with salmon, slaw, a sprinkle of dried cranberries, cilantro, and the crispy salmon skin. Serve immediately. 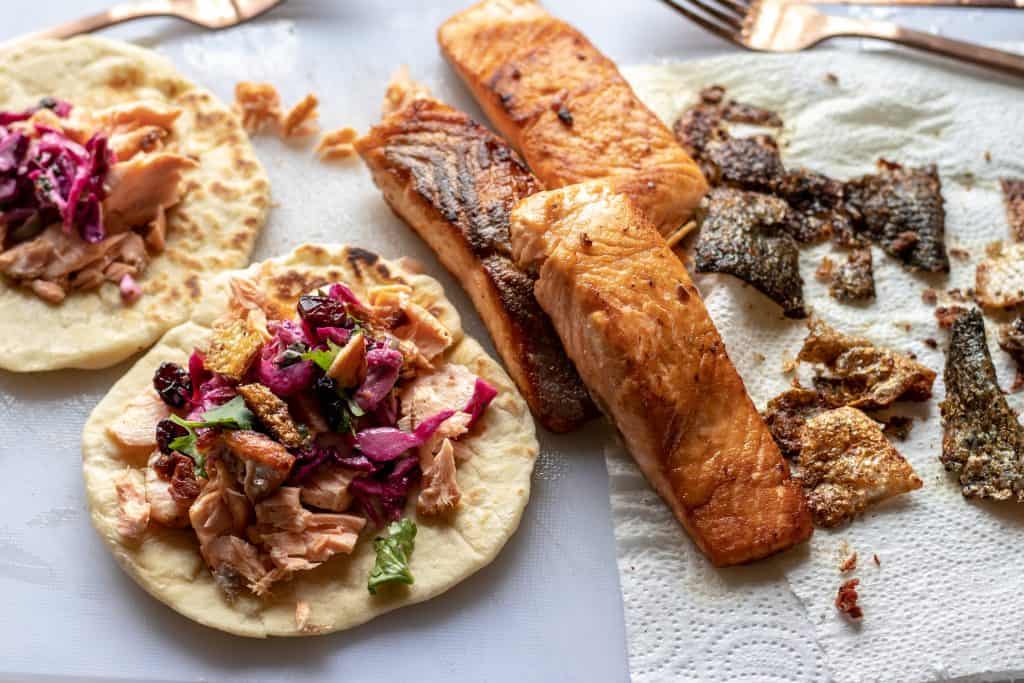 These salmon tacos with crispy skin can easily modified to fit the season by throwing the fish on an outdoor grill. And while you’re at it, switch out the flour tortillas for a corn version or, to make them even lighter, use big lettuce leaves instead!

What is your favorite fish for tacos? Do you prefer fried or grilled? Let us know!