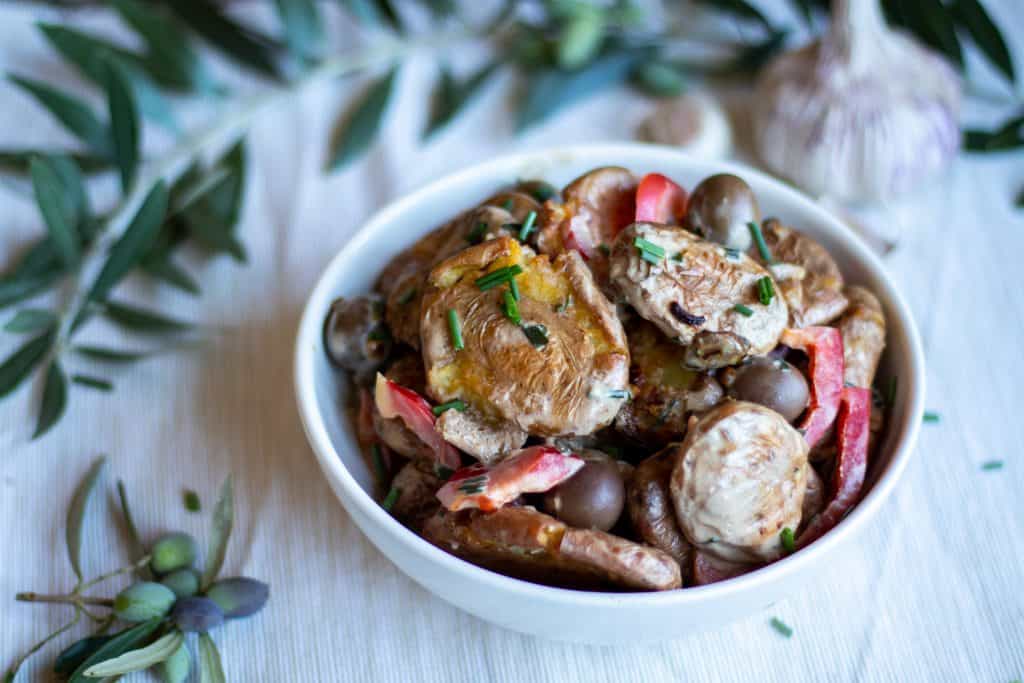 Potato salad, in one form or another, has consistently graced every holiday table in my home since birth with the season being the only real modifier to the preparation and ingredients used.

Boiled and cubed or mashed skin on or off, perhaps roasted for something a little more offbeat. Serve this salad mixed with a variety of crunchy vegetables, or leave the potatoes in a near solitary state, save for the dressing of salt, vinegar, and oil or coated with creamy mayonnaise and a hint of mustard. The options for such a classic dish are seemingly endless once creativity is allowed to take hold!

My kitchen has the influence of Portugal in it because of my location. This country has taught me a few new ways to prepare potatoes that I had never tried before such as Portuguese punched potatoes. These potatoes are roasted whole, “punched down”, dressed with a bit of olive oil salt and other herbs and seasonings, then returned to the oven where they are allowed to crisp around the edges while simultaneously becoming soft and infused with flavor.  This makes them ideal for any cool weather spread.

This preparation allows the potatoes to speak for themselves but is confident enough in its flavor to easily be accompanied with bites of crisp sweet red peppers and a smattering of briny green olives. A healthy dressing of creamy yogurt, infused with balsamic vinegar, and a light herby punch of chives is just right to finish it off.

The best part of this particular potato salad? It’s something that can be prepared the day before, roasted while cooking something else on top of the stove, or can be done winter or summer! 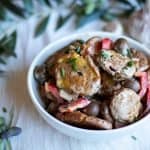 Preheat the oven to 400F with the rack set to the middle. Line a baking sheet with aluminum foil.

Rinse the potatoes under cool water and scrub the outside if necessary to remove any dirt or debris. 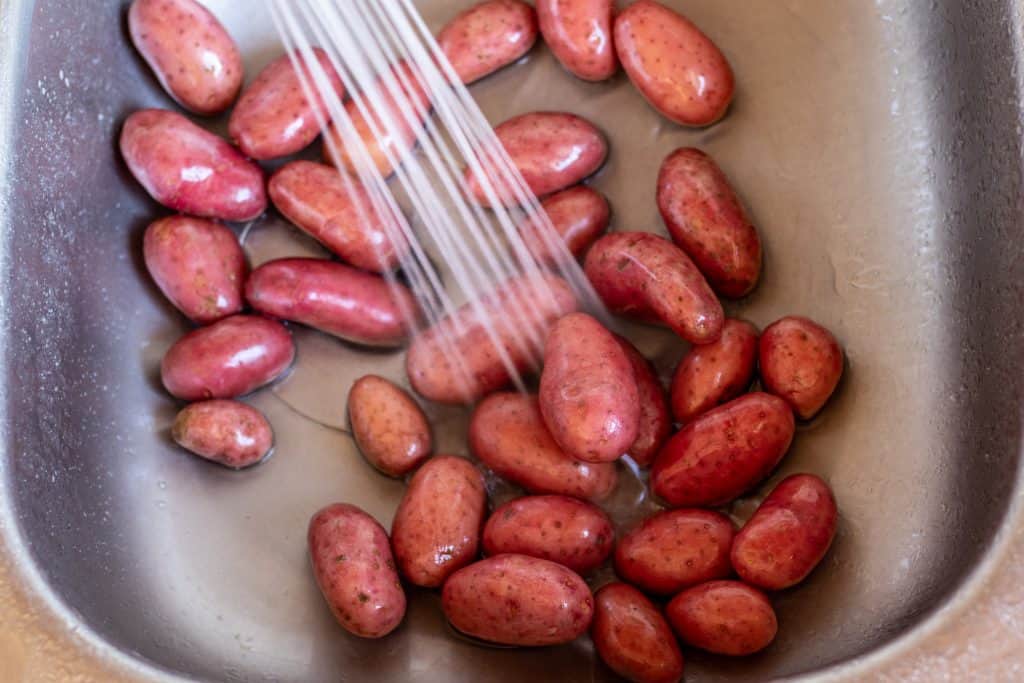 Hold a potato one on hand and, using a fork, poke holes around the outside of the potato. Repeat with all the potatoes. 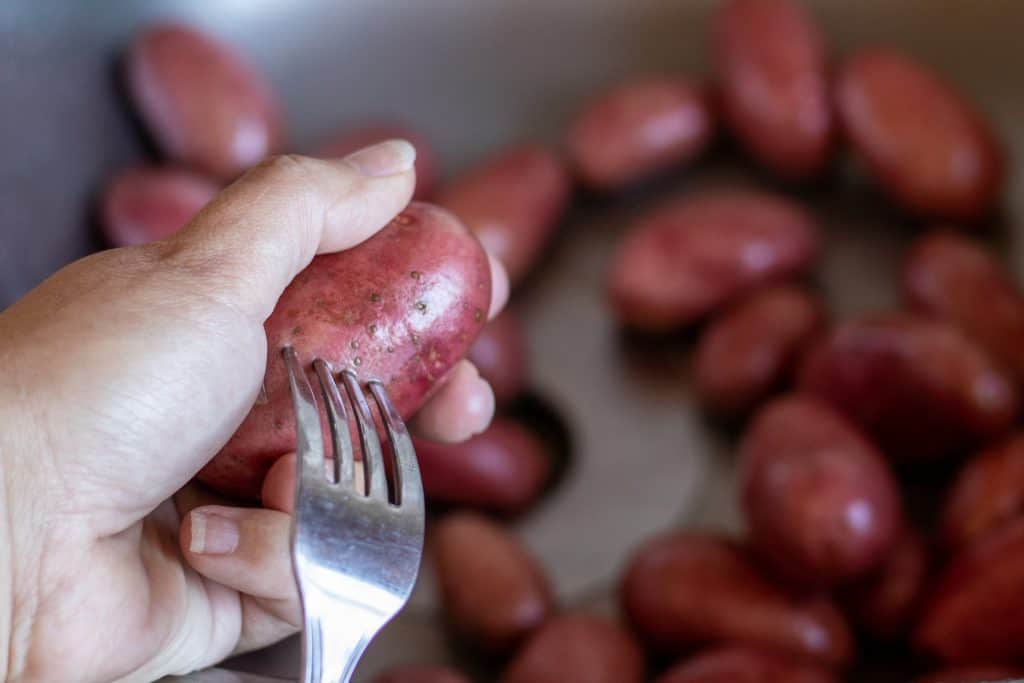 Place the potatoes on the lined baking sheet and allow them to cook 20-30 minutes. 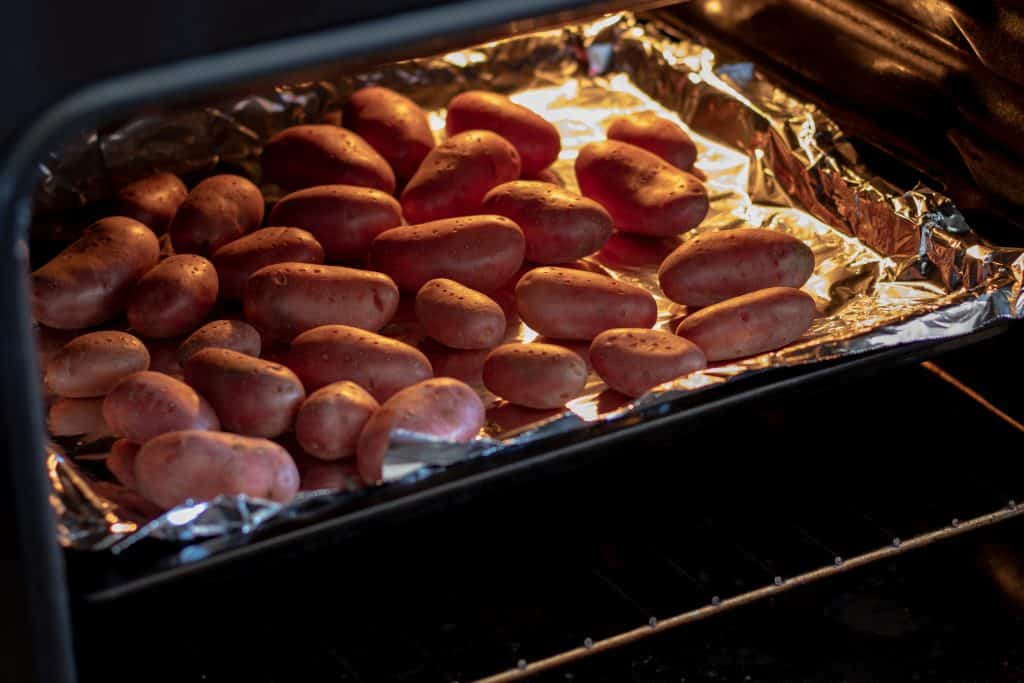 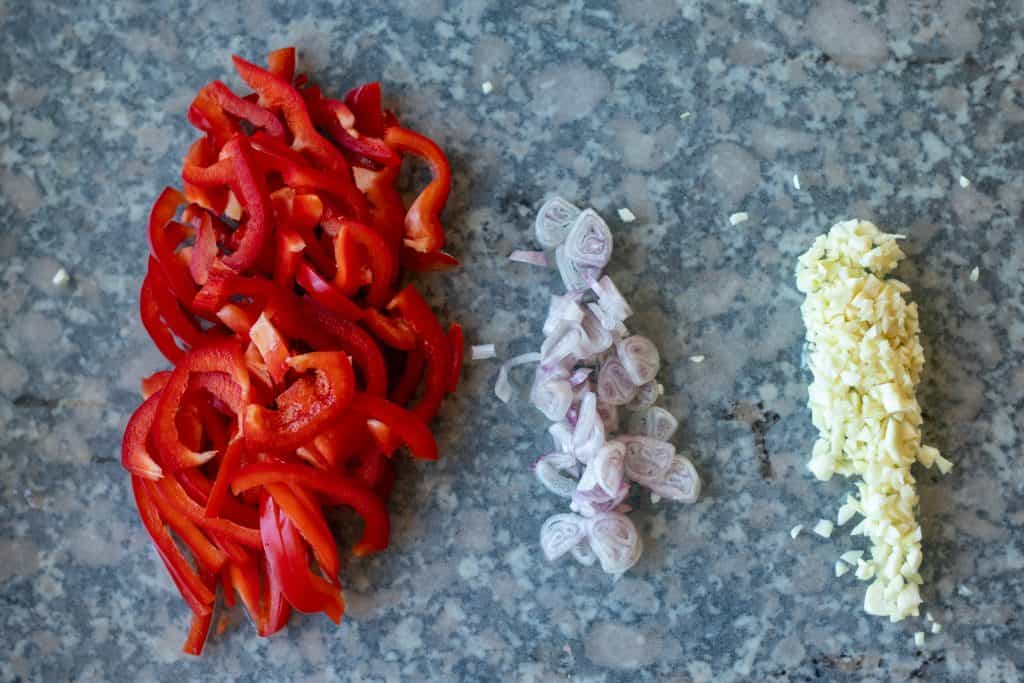 Put the yogurt into a bowl along with the balsamic vinegar, olives, olive oil, and chives. Stir well to combine. 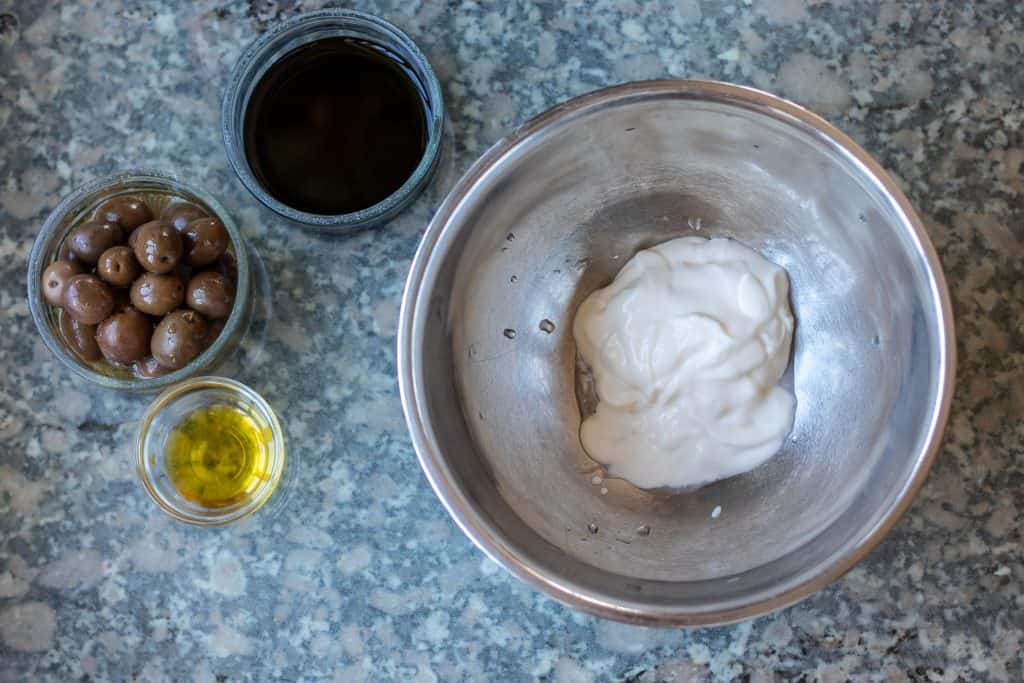 Cover and set the bowl to the side. 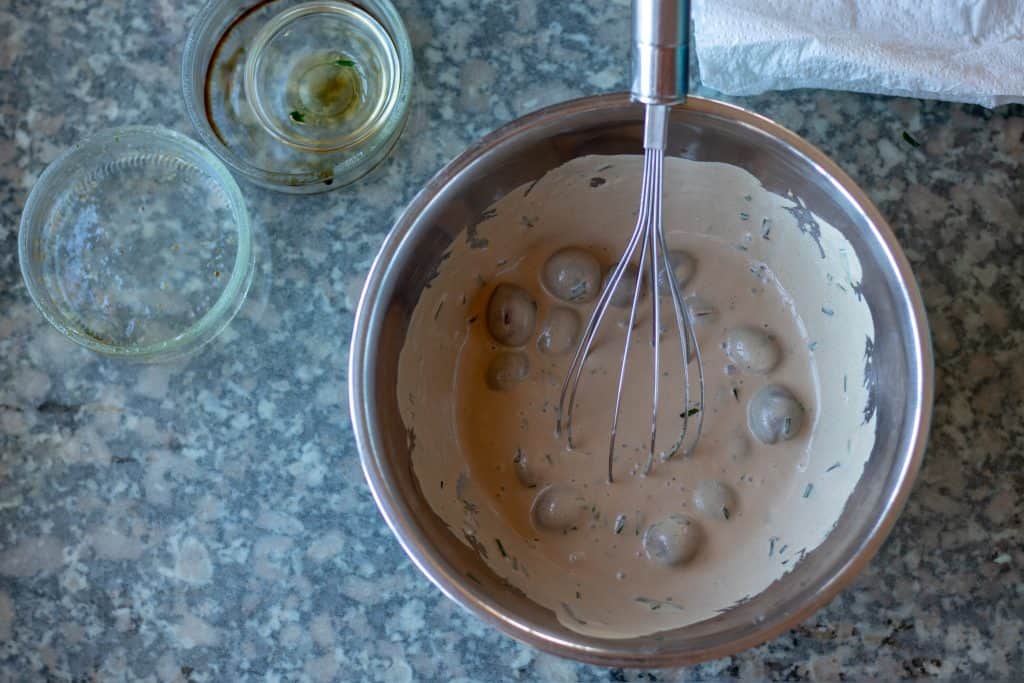 When the potatoes are done remove them from the oven and transfer them to a cutting board with a clean kitchen towel on it. Allow them to cool just enough to be able to touch.  Do not turn off the oven. 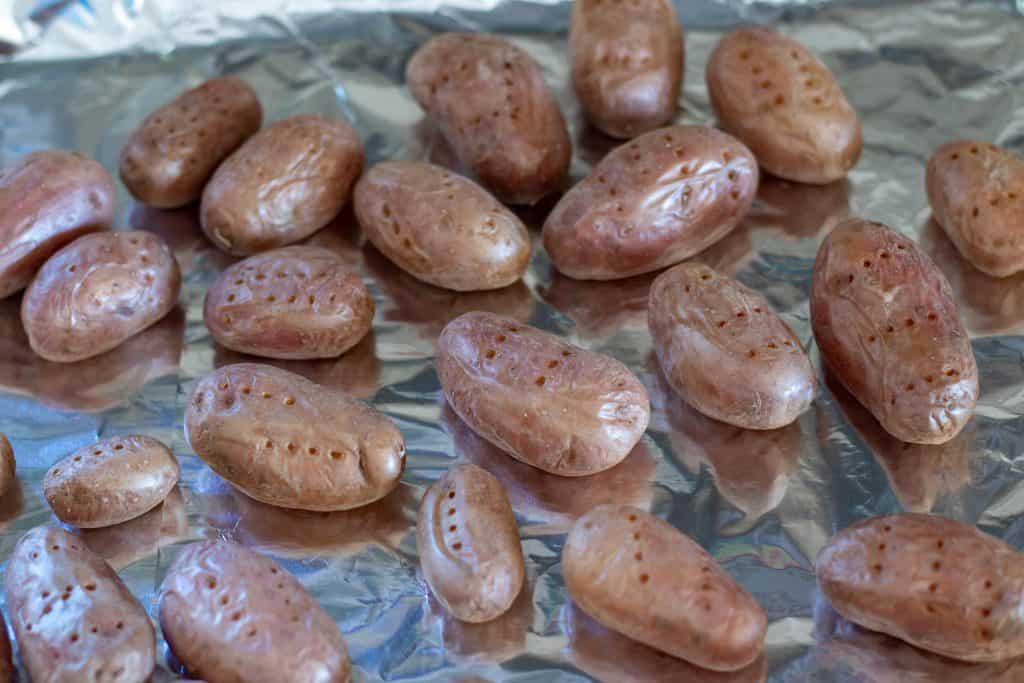 Using another clean towel, lay it on top of a potato and press down. It should pop open. Repeat with the rest of the potatoes. 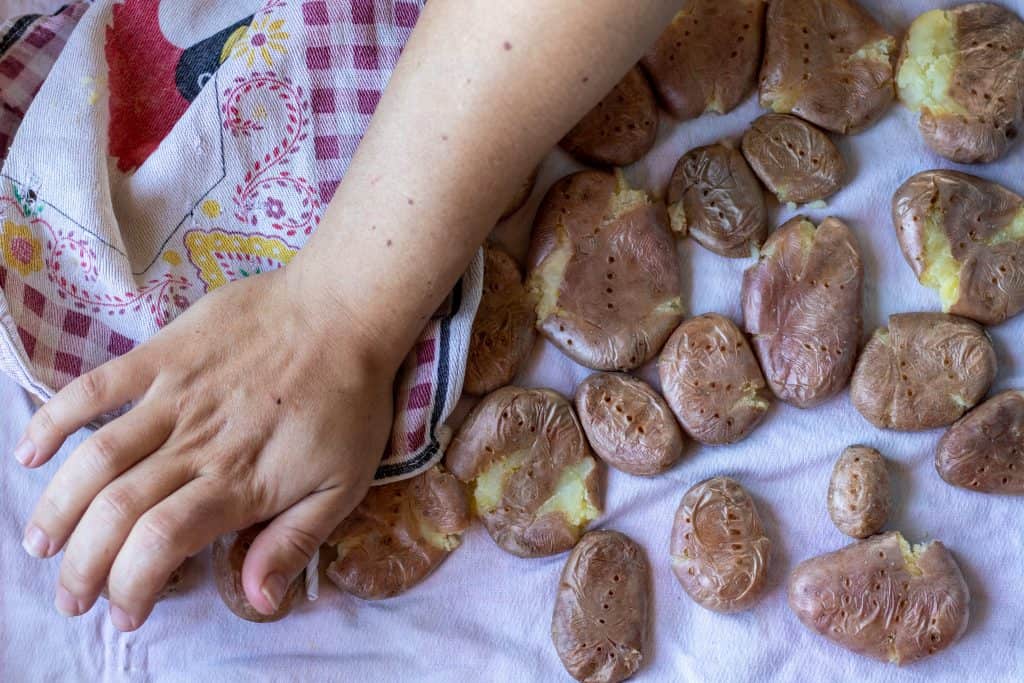 Once the potatoes have all been “punched” transfer them to a large bowl and drizzle olive oil on top. Add the sliced shallot, minced garlic, coarse salt and toss them all together to coat the outside of the potatoes well. 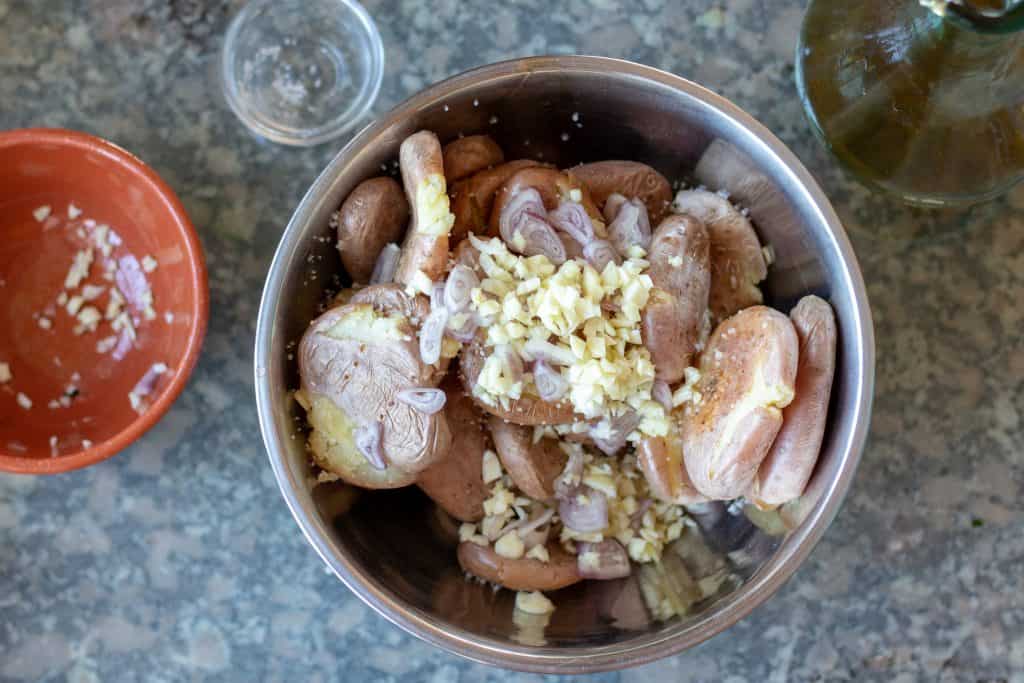 Place the dressed potatoes back on the baking sheet and put them back into the oven and let them bake another 15-20 minutes. They are ready when the skin has crisped up and has turned golden brown.

Take the potatoes out of the oven when they are done and transfer them to a large bowl. 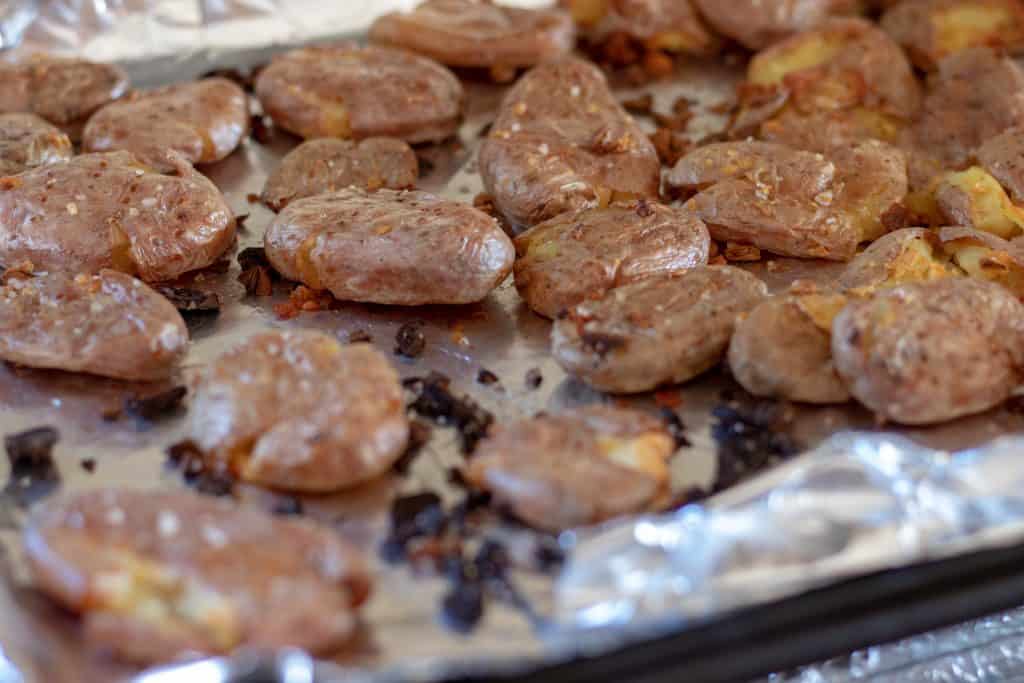 Add the pepper and any crispy, but not burnt, bits of shallot and garlic to the bowl with the potatoes. Pour the dressing on top and stir well to coat the potatoes with it and evenly distribute all the ingredients. 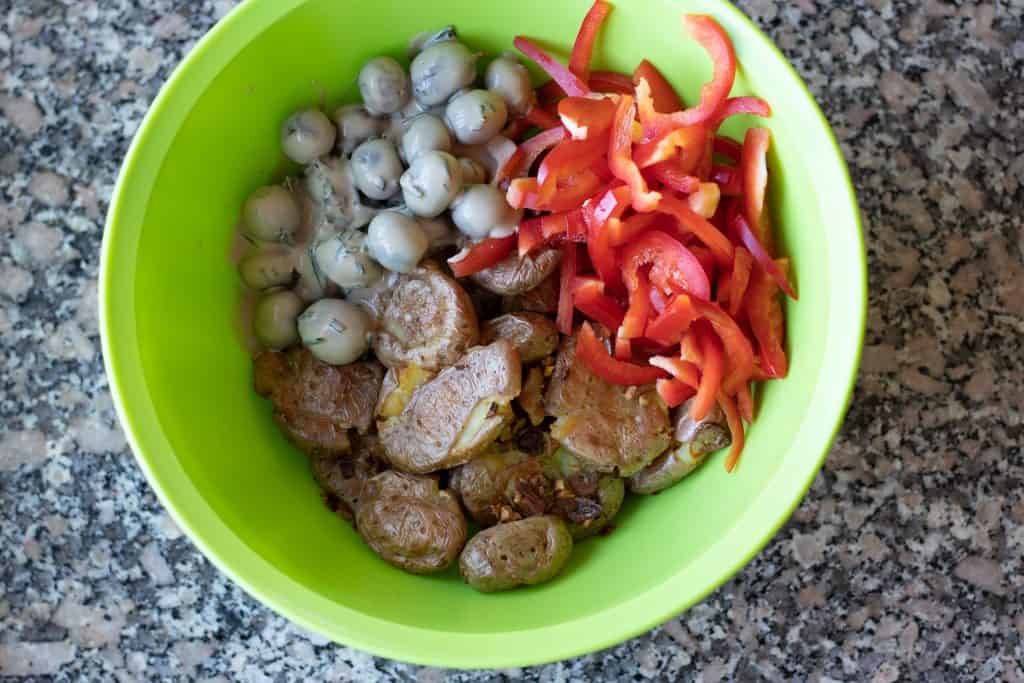 Serve the punched potato salad warm or chill it in the refrigerator until ready to serve. 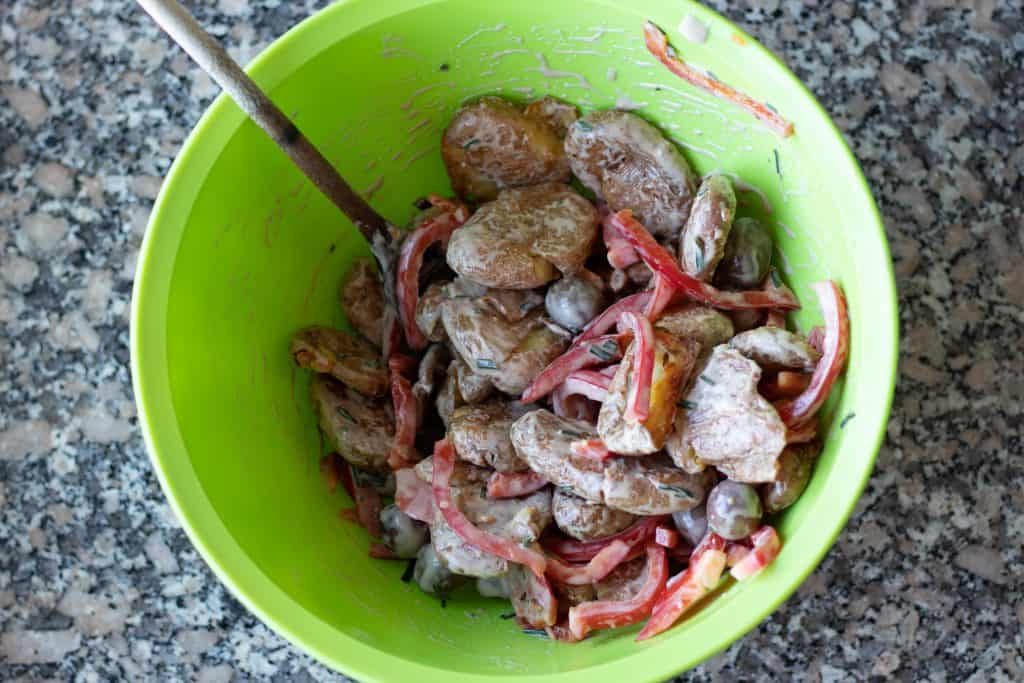 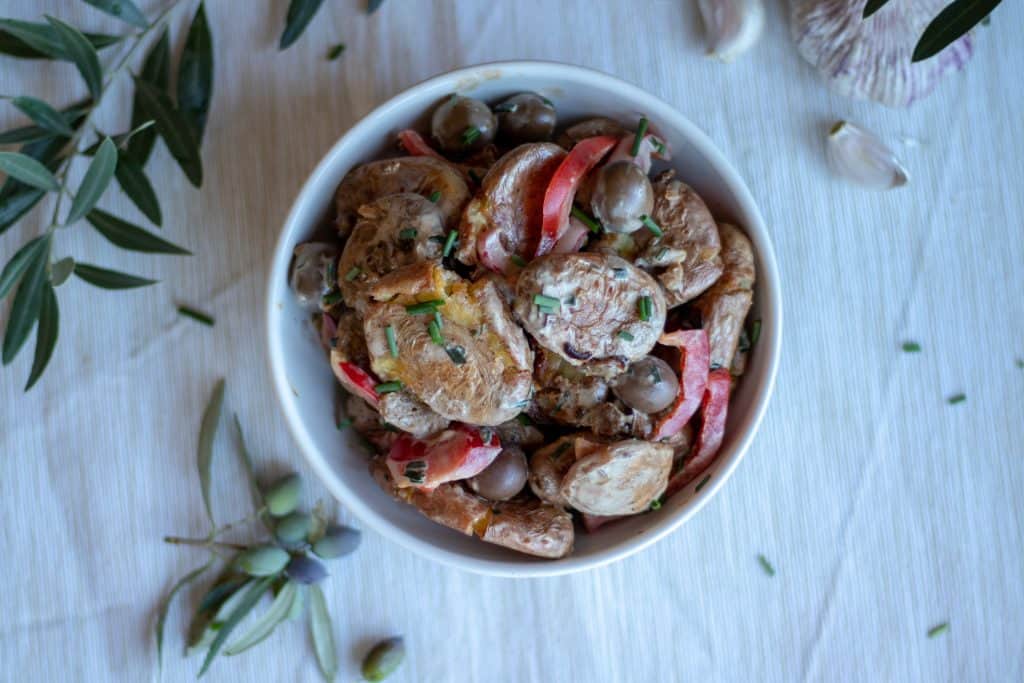 Many potato salads are easy to switch up, and this is no exception. Roast the potatoes on a grill for summer, or forget the yogurt in the dressing to make it just a little lighter. Add more herbs or peppers to really punch up the vitamin C too. What is your favorite type of potato salad? Let us know!