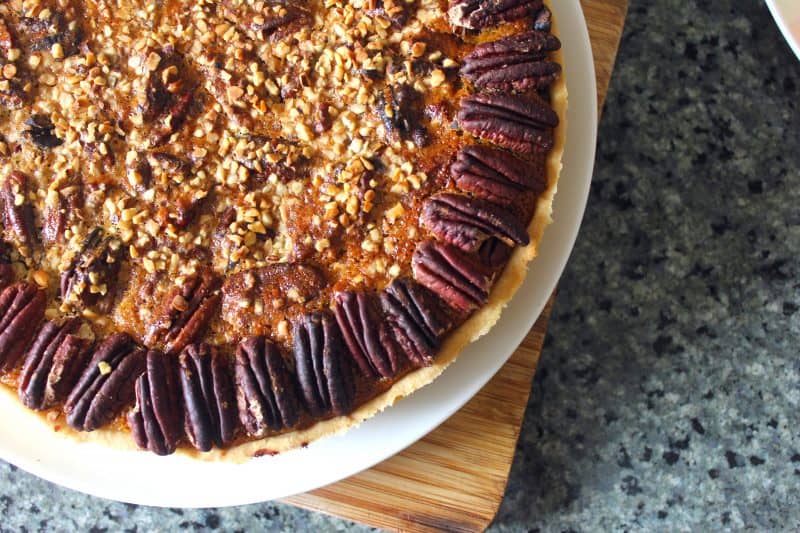 Traditional pecan pies generally consist of pecans drowned in egg custard, butter and sugar. It is said that the French invented pecan pie when they settled in New Orleans, after they were introduced to pecan nuts by Native Americans.

The actual making of a pecan pie is relatively easy. However, the high sugar content, the cholesterol from the eggs and the extra calories from the butter make this a very intense but inviting treat, which is probably why it’s a pie that is mostly reserved for the holidays. Pecans, on the other hand, are extremely nutrient dense. Pecans contain monounsaturated fats responsible for reducing the risk of heart disease, magnesium which aids in reducing inflammation, and the ellagic acid found in pecans fights free radicals that cause premature ageing. All technicalities aside, this is a wonderful treat to make for yourself or a loved one no matter what the occasion or time of year, as even while it’s baking it’s going to fill your home with the most scrumptious, cozy aroma that is guaranteed to put anyone in a good mood in seconds — and that’s before even having a slice. I especially love having pecan pie in the morning with a nice cup of black coffee, since, even though it’s not a must, pecan pie is best served after leaving it to rest in the fridge overnight. I let mine rest in a cake box on my countertop, because I prefer having my pies at room temperature.

I wanted to make this pecan pie recipe as healthy as I could, so I left out the corn syrup. Although it’s not as bad as high fructose corn syrup, I wanted to make an indulgent pie recipe without the side of guilt that it’s generally served with. I used bourbon in this recipe, but you can omit it completely and still have a great tasting pie! You will need to play around with adding more spices and increasing the amounts of cinnamon, nutmeg, and ginger powder to still create a dynamic flavour under all the sweetness!

If you’re going to make a pie shell from scratch and you don’t have a mixer, the biggest tip I want to give you is: don’t use your hands until the very last second when you need to collect all the dough into a ball, as the heat from your hands is going to melt the butter, which will affect the flakiness of your crust. Use a fork (or pastry cutter) to cut the fat (butter/coconut oil) into the flour. Overworking the dough is the surest way to ruin the flaky crust that you ultimately want to achieve. Aside from that, just have fun baking! 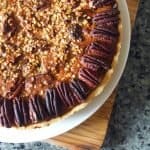 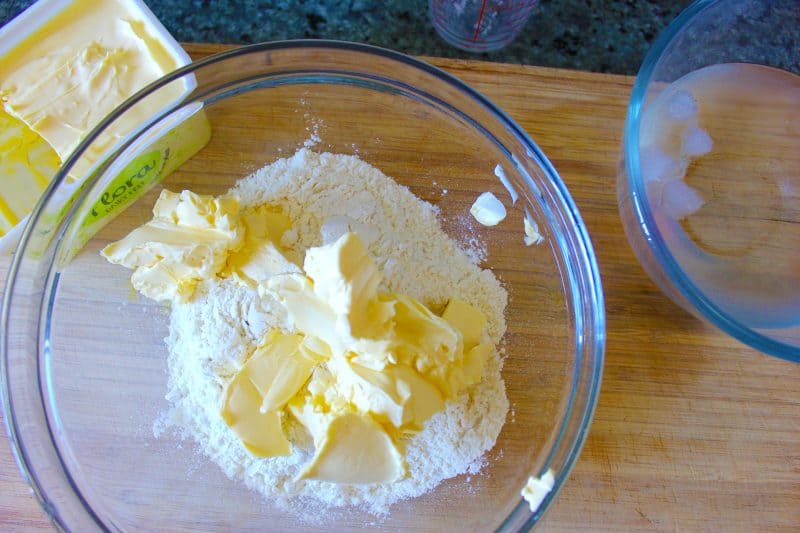 Now that the butter and flour are well combined, slowly add the ice water to the mix until the dough becomes “sticky”, and continue mixing with a fork. Use your fingers to pinch some dough — if it sticks together well, you’ve added enough water. 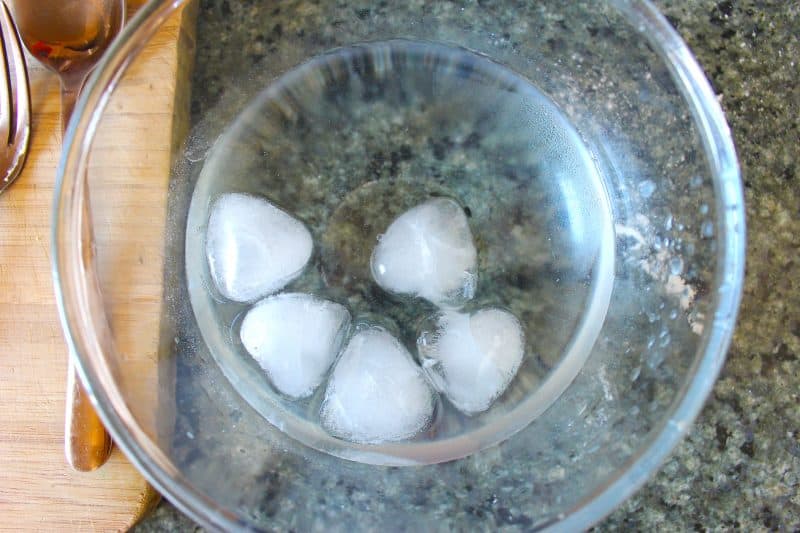 STEP THREE – FORM A BALL AND LET IT REST

Collect the dough with your hands (you don’t need to take it out onto the countertop). Ideally you’ll want to collect all the dough so that your mixing bowl is clean, leaving hardly any residue. Do not knead the dough. Shape it into a ball, cover it with cling film and leave it to rest in the fridge for at least an hour. I’ve tried leaving the dough to rest for 20 minutes, but I find that the bare minimum really is an hour if you want a successful pie crust. Leaving the dough to rest in the fridge allows the flour to really absorb the flavours from the salt and butter. It also allows the gluten in the flour to relax, resulting in a more flexible dough. 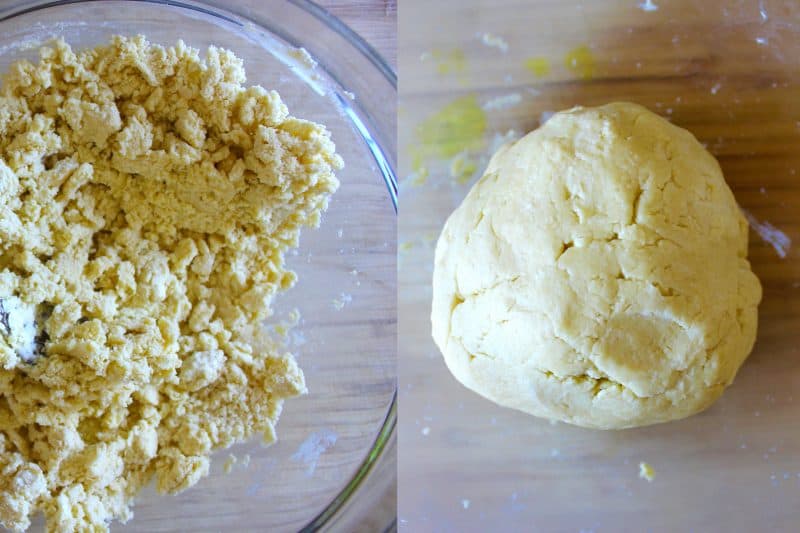 STEP FOUR – ROLL OUT THE DOUGH 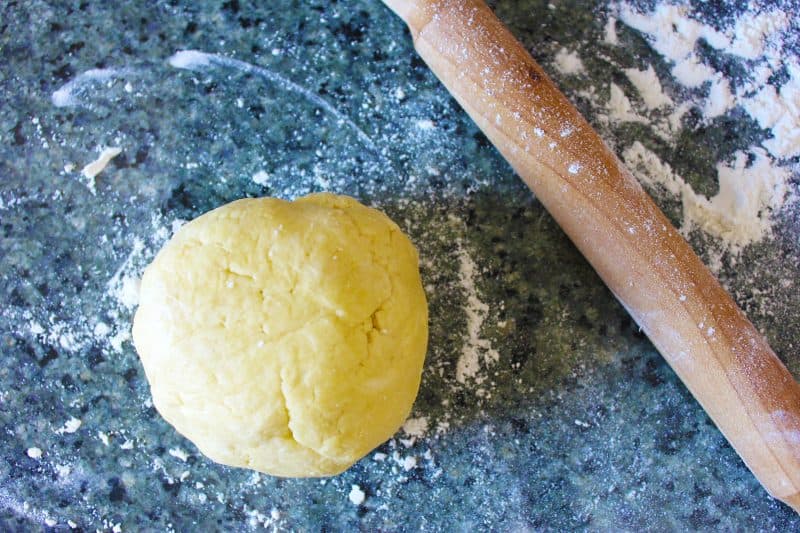 Grease your pie dish and carefully roll the dough onto the rolling pin to make it easier to lift and transport. After placing your dough in the dish, gently press the sides and edges down and cut off all the extra dough hanging off the edges. You can do this quickly and easily by taking your rolling pin and rolling it over the pie dish so that when it presses down on the edges, the extra dough falls away. Lastly you’ll need to poke little holes in the bottom of the pie shell with a fork. This helps to stop the bottom of the pie shell from morphing and arching upwards from the heat in the oven. 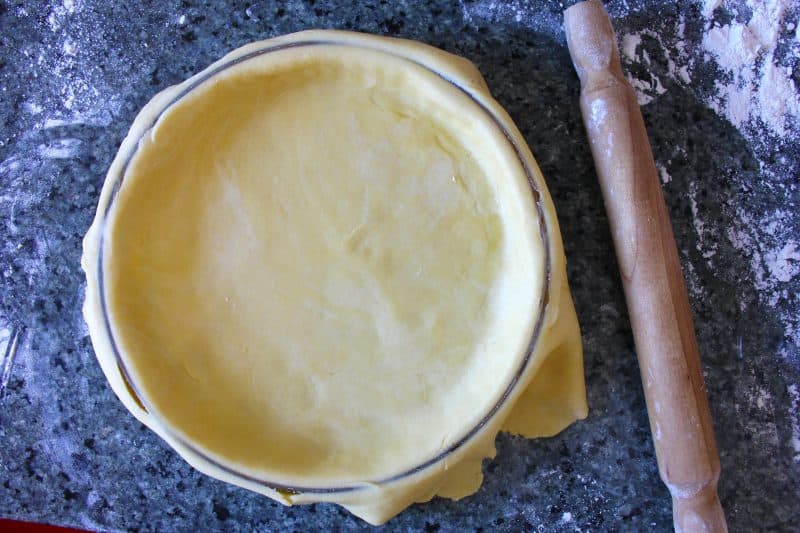 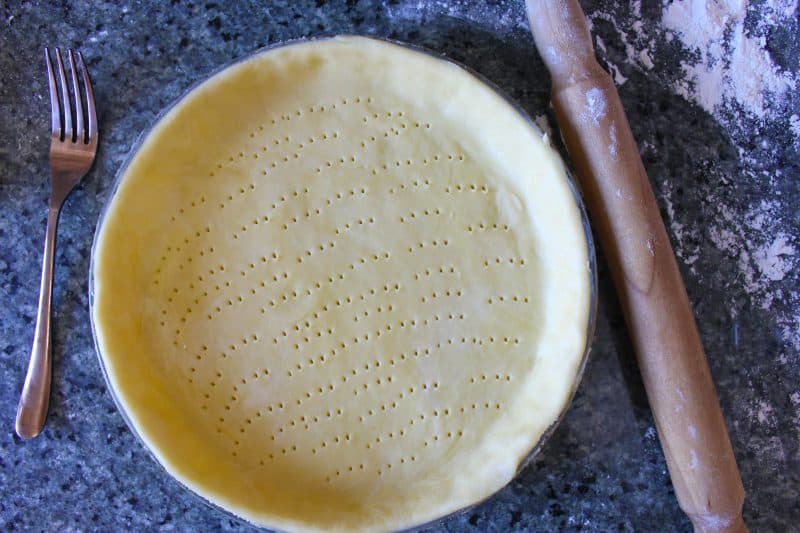 Cover the pie shell with baking paper and place your baking weights or beans on top. Alternatively you can also use rice. Make sure that the weights you use are placed evenly and also come up to the sides of the pie shell. This will ensure that during the blind baking, the shell doesn’t shrink too much and will still retain its shape. 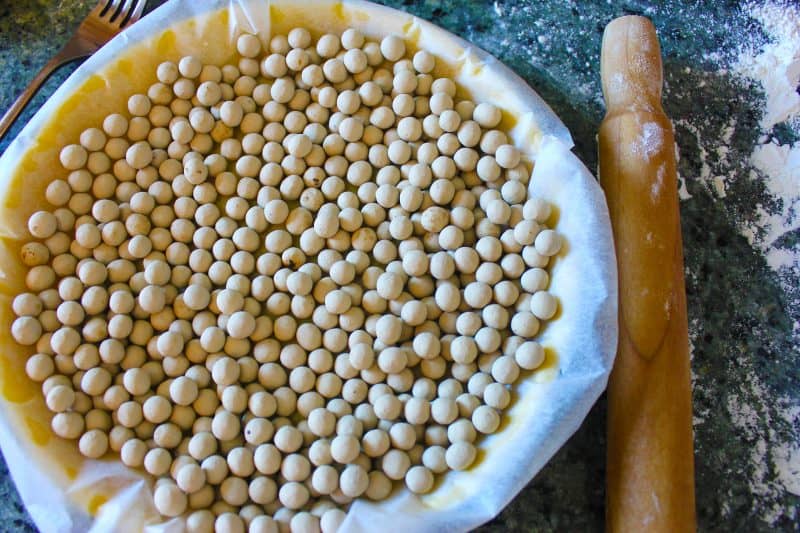 Bake the pecans for about 7 to 8 minutes to get them nice and toasted while you’re blind baking the pie shell. This will intensify their flavor, but it’s not a must. I like to toast half my pecans, to get a variation of colours when their all mixed together, as the toasted nuts will be darker. 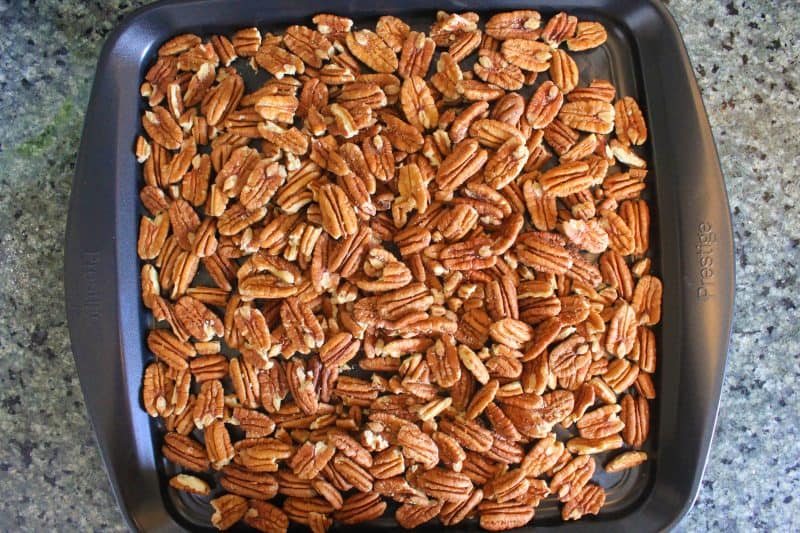 Mix the VeganEgg powder and water and set aside for now. Mix vigorously with a fork, or use a high speed blender to get an even fluffier consistency. 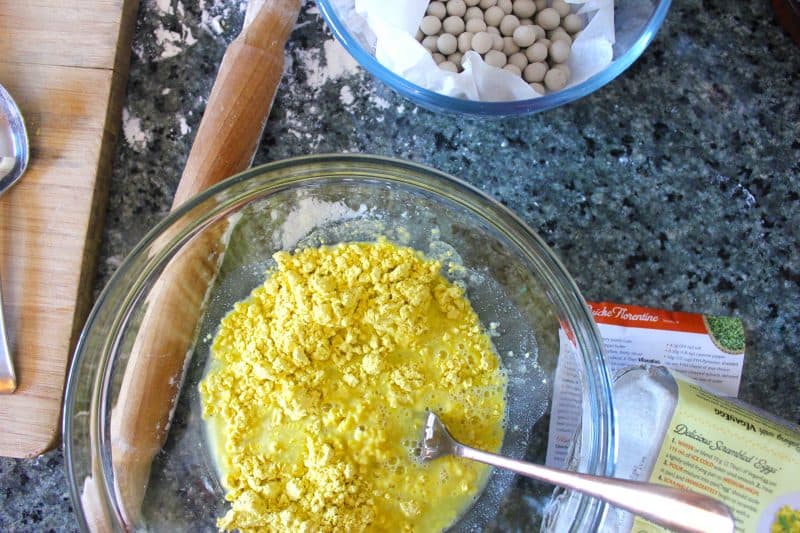 Mix the sugars, maple syrup, butter, milk, flour and spices into a small pot. Using a whisk, stir occasionally on medium heat until it comes to a gentle boil. Remove the pot from the heat and set aside for about 2 minutes. 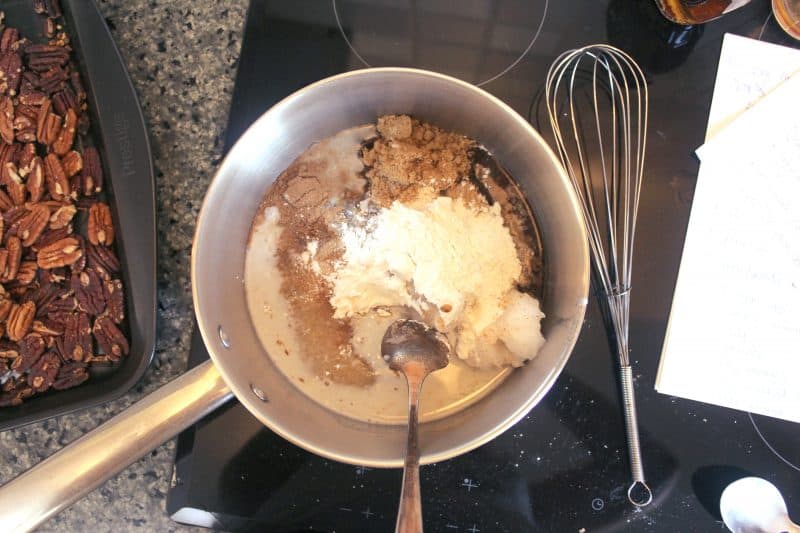 After letting the custard mixture cool down a little, slowly add it into the VeganEgg mixture, making sure to continuously whisk them together. Now you’re almost done! 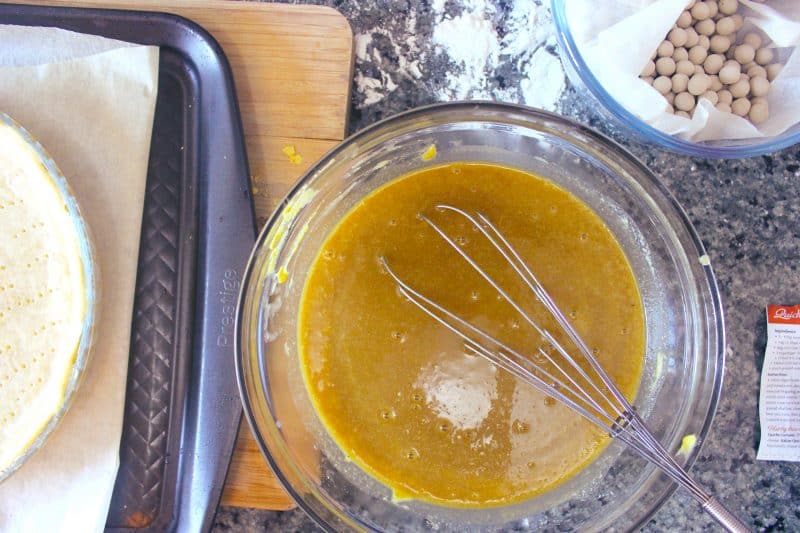 Place the pecans into the pie shell. You can either lay them down in concentric circles, adding a little bit of the custard mixture after each layer of pecans, or can you simply dump them in, like I did! The former method allows for a more even distribution of pecans, as sometimes the pecans can float to the top. I just threw in some pecans to form an even layer, then sprinkled some dessicated coconut on top before pouring in half of the custard. Repeat until you’ve poured in all the custard mixture. I topped it off with a sprinkle of hazelnuts, because I love the smell of hazelnuts in the oven! 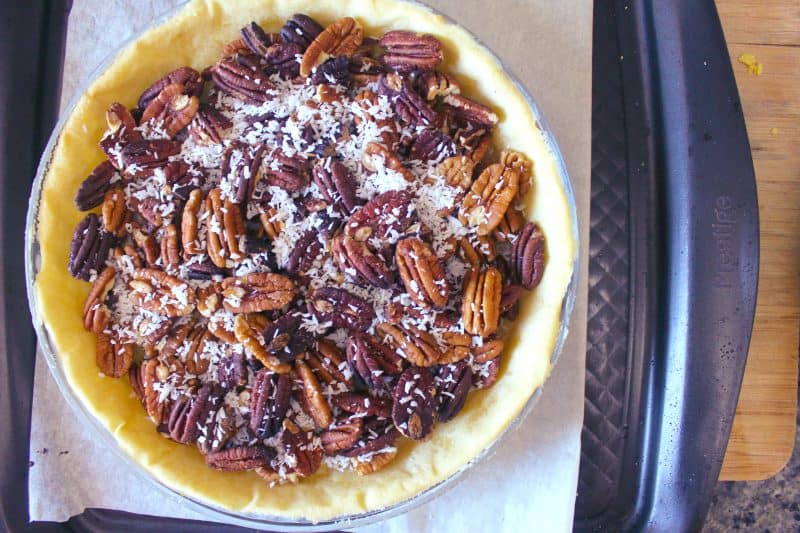 Place the pie dish onto a baking tray. This makes it a lot easier to move the pie dish in and out of the oven without any accidents! Bake the pie for 40-45 minutes at 180°C / 350°F, or until the pie is golden brown and set. If you shake the pie dish and it’s still jiggly, continue baking for a couple of minutes. 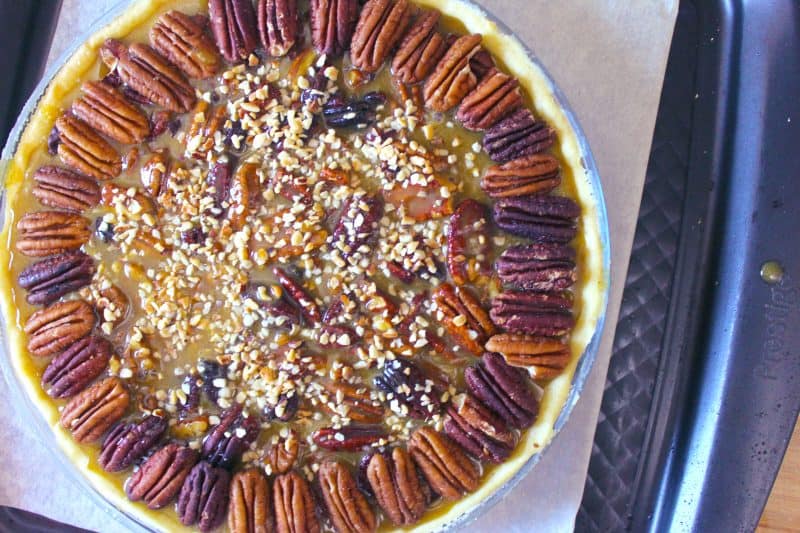 Ideally you should let the pie rest overnight. But letting it rest in front of an open window for at least four hours would do nicely as well. If you are keeping it in the fridge overnight, simply pop it in the microwave for a minute to get it nice and toasty again. 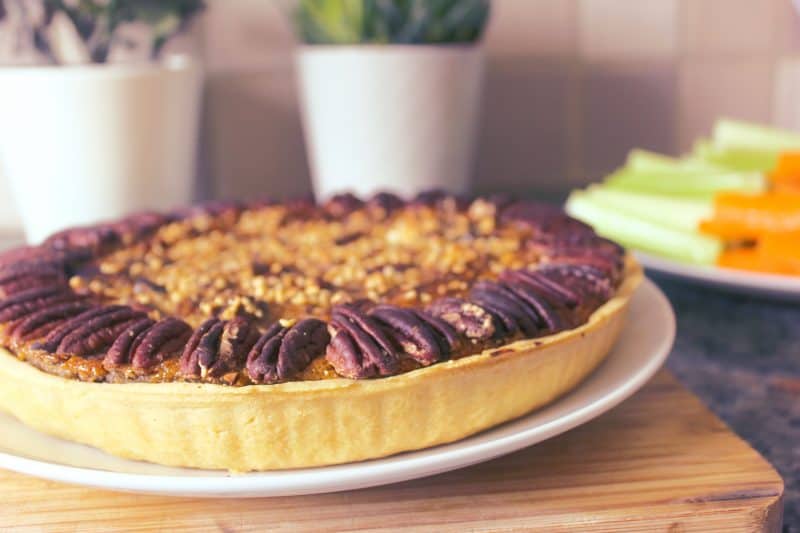 Although this pie turned out really well, next time I make this recipe I will try adding slightly less of the VeganEgg, and adding more milk, as although it was soft and moist, I want to try and take that ooey-gooey factor up a notch. I really liked how the dessicated coconut added just a hint of that coconut flavour, just enough to let you know it’s there, but not too much to overpower the star of the pie; the pecans. Even though this is a vegan recipe, you can easily use whole eggs, and dairy instead of the plant based options. 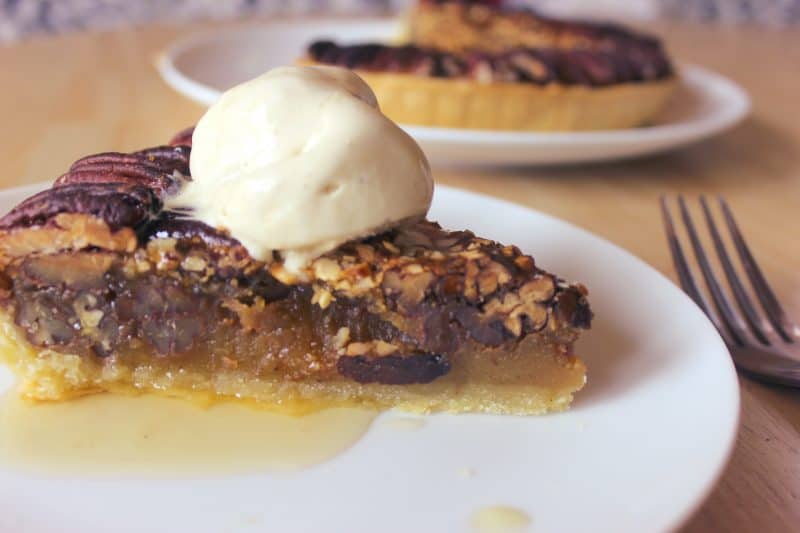 Serve it à la mode with some vanilla ice-cream, topped of with a drizzle of maple syrup, or just enjoy it as it is! This is honestly such a great breakfast in bed recipe to treat a loved one, or to have ready when you have houseguests over.