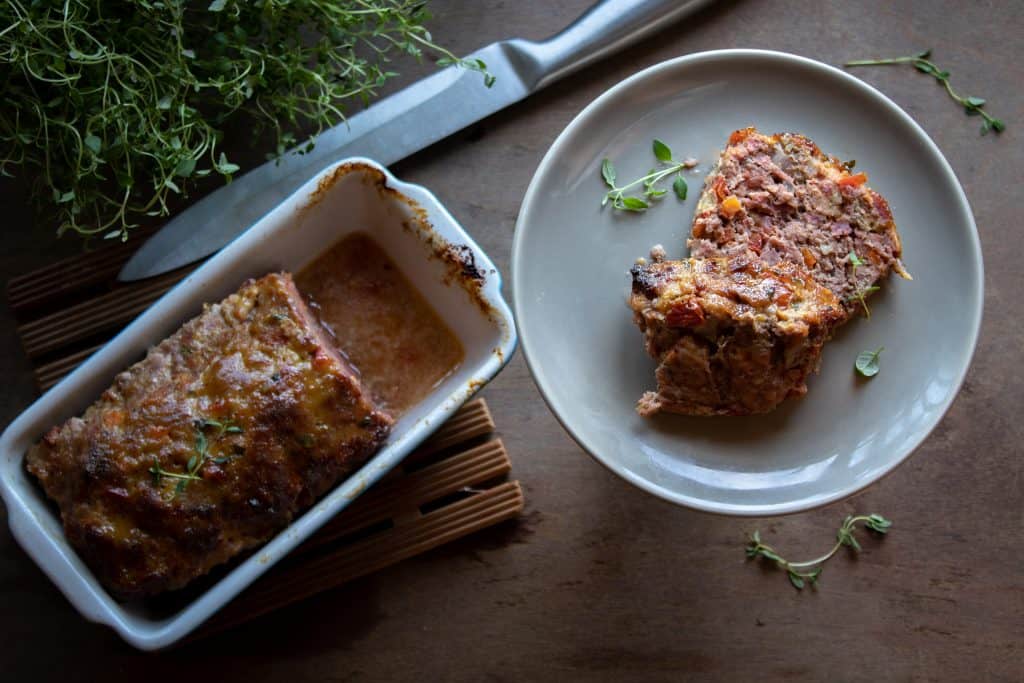 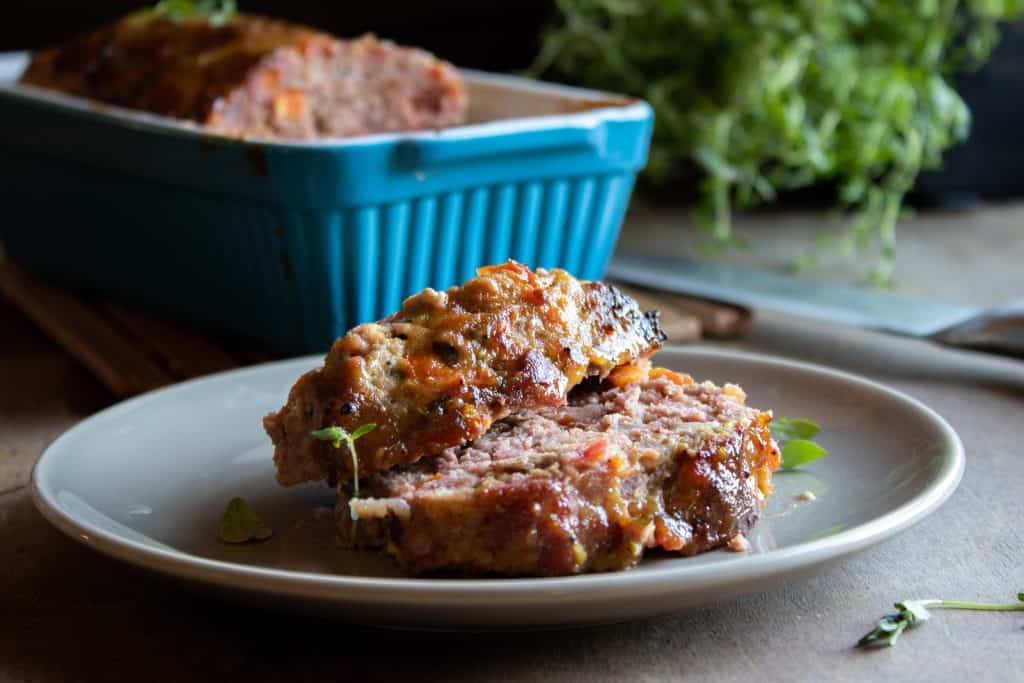 Meatloaf is one of those dishes that is either loved or hated. I’m firmly convinced that if it’s a cherished dish that brings back memories of warm cozy family dinners, it was a really good meatloaf. The secondary reaction usually means it was pretty bad. Not just bad in flavor, but probably too dense, too dry, and basically bland except for a layer of sticky overly sweet dark red smeared on top. I was in the latter group growing up.

The realization that meatloaf could be delicious was close to a revelation. I remember getting a kick out of playing with the ingredients while making the food as a child, the meat, eggs, and other ingredients squishing between my fingers, then being formed into a loaf and tossed into the oven to be cooked. That was where most of the enjoyment ended when it came to meatloaf for dinner.  That is until I grew up and decided that the traditional recipe needed to change to turn it into one of those dishes that are cherished rather than avoided.

An overhaul of one of the most traditional recipes requires some effort and many trials and errors to make it worthwhile, though, in the case of meatloaf, one must just take a look at what is wrong with the classic and the think creatively about how to solve those problems.

Density is the main culprit in making meatloaf little more than just barely edible. Something so packed down that it becomes a brick can’t possibly be juicy, flavorful, nor have much texture. To correct this I realized that adding diced vegetables, sautéed beforehand to add flavor, would not only create space but texture and nutrition. Toss in a couple diced juicy ripe tomatoes there will also be plenty of moisture for the meat to baste itself in as it cooks, transforming that flavorless dry brick into a dish that has the essence of herbs, spices, and nourishment literally flowing through it.

But that is just the foundation of turning meatloaf into something worth eating. That one-dimensional layer of red sweetness though? It’s something else entirely.

Most often, meatloaf just has to have that ketchup layer on top. It can be jazzed up with the addition of this and a little bit of that, but it’s so boring. I decided for this recipe to remove the tomato-based sauce altogether and opted for a more autumn-like taste with honey and Dijon mustard. Just a little apple cider vinegar for a bit of tanginess, thyme for more depth, and melted butter to help pull that all that saucy goodness down into the rest of the meatloaf and infusing it with flavor worked like a charm.

What was the result of this new enhanced recipe? The best meatloaf I’ve ever had. 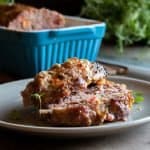 STEP ONE – PREHEAT OVEN AND CUT THE VEGETABLES

Turn the oven on to 350 F and allow it to heat while preparing the meatloaf. 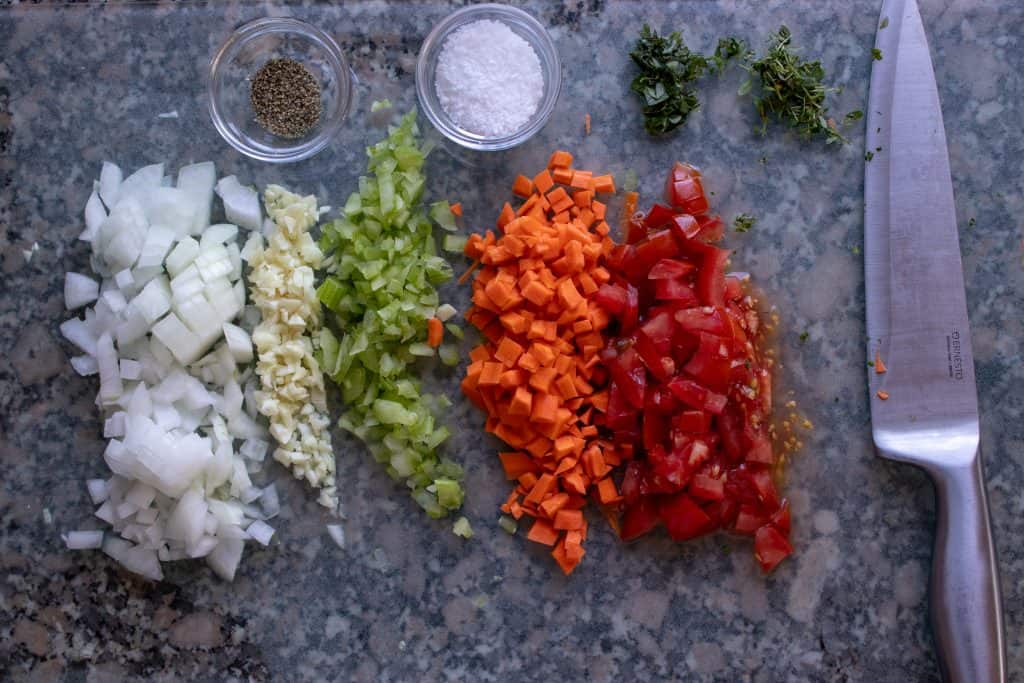 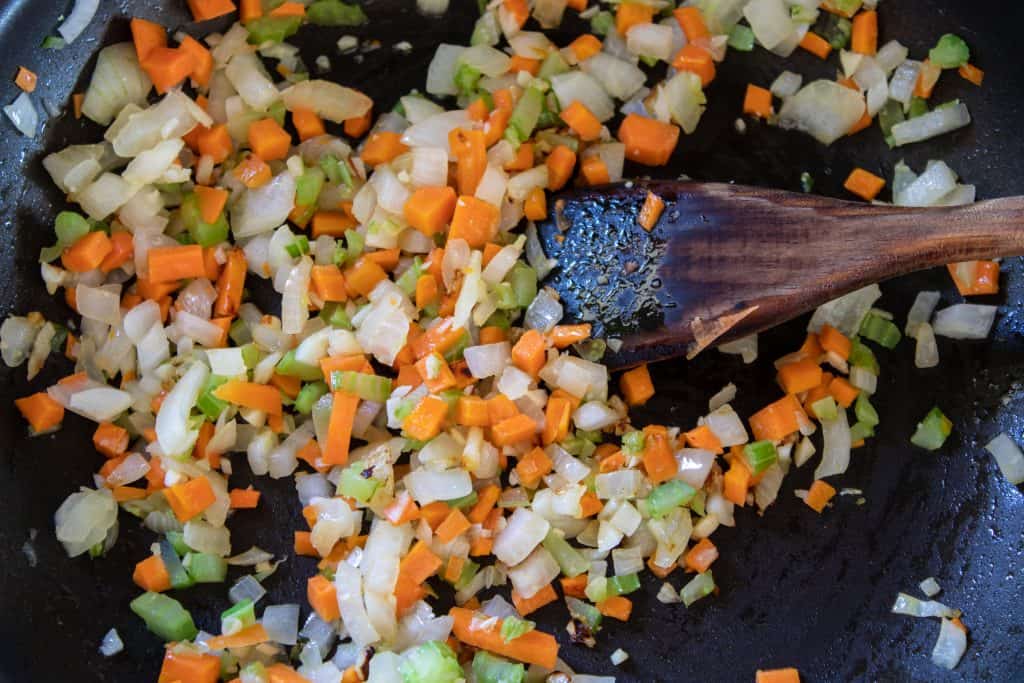 Pour the olive oil in a sauté pan over medium-high heat. Once it has gotten hot, add in the onion and garlic and cook a couple minutes, making sure to stir it so it doesn’t stick to the bottom of the pan. Next, add in the carrot and celery and cook them, again stirring frequently, and cook until they are tender and just start to turn brown. Turn off the heat. 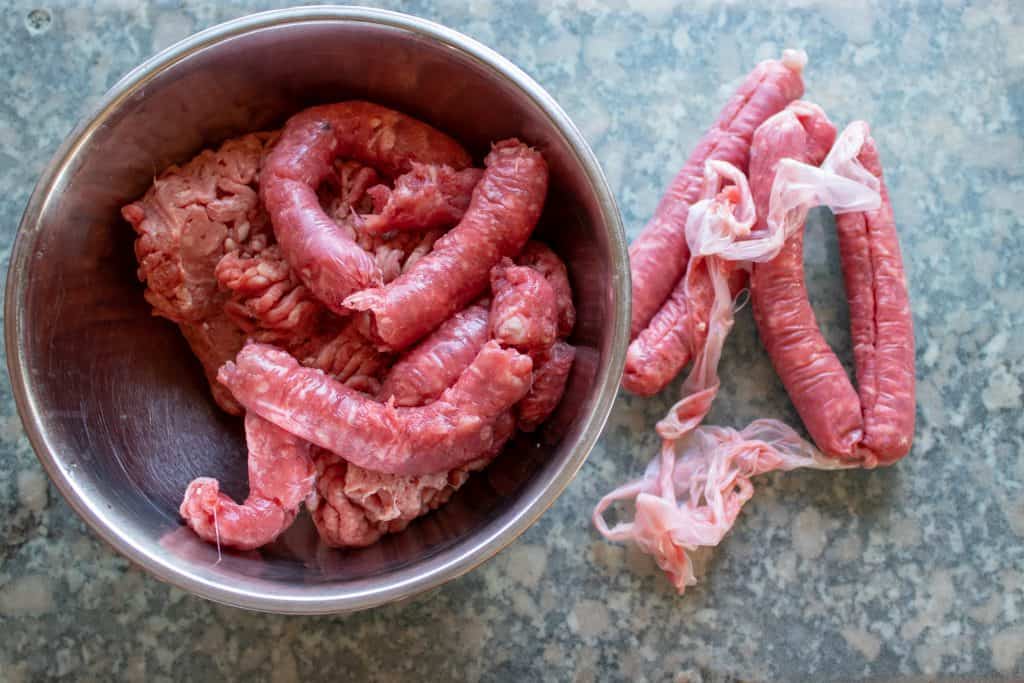 Put the ground beef into a bowl and remove the casing from the sausage before adding it to the bowl as well. 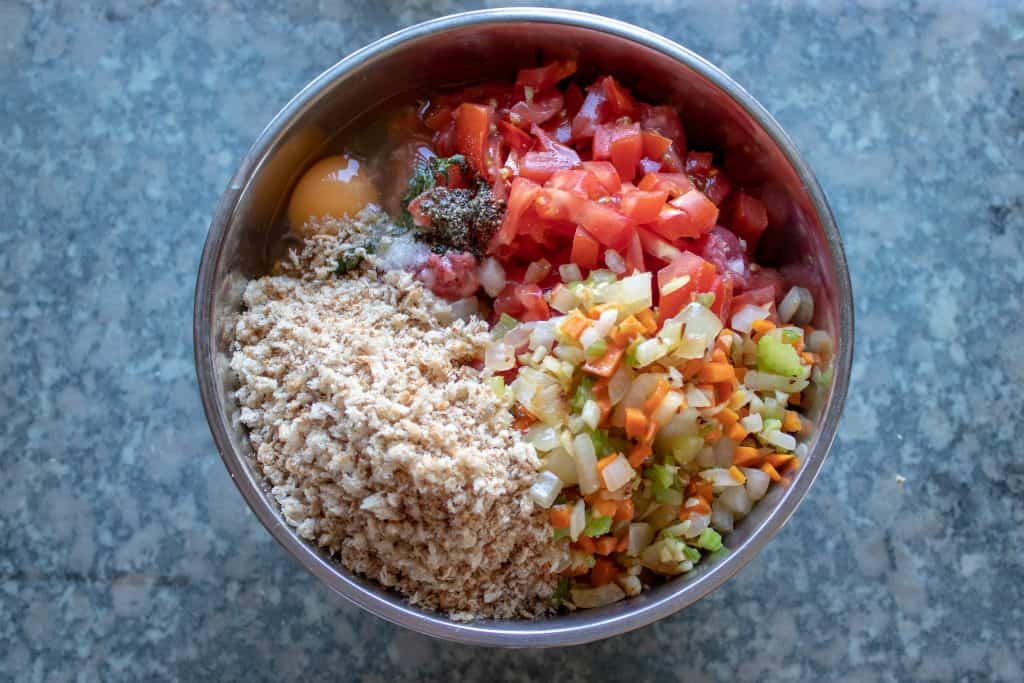 Transfer the cooked onion, garlic, carrot, and celery to the bowl. Next, add the diced tomato, dried herbs, salt, and pepper. Crack the egg into the bowl and add in the breadcrumbs. 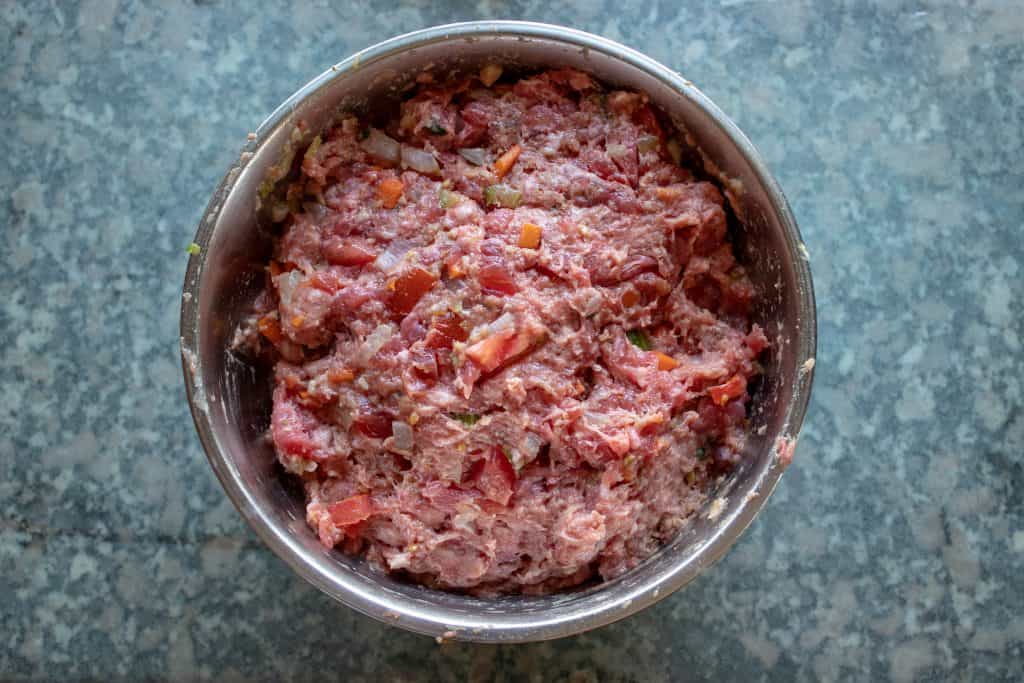 Using your fingers, mix everything together really well to make sure everything is evenly distributed throughout the meat. 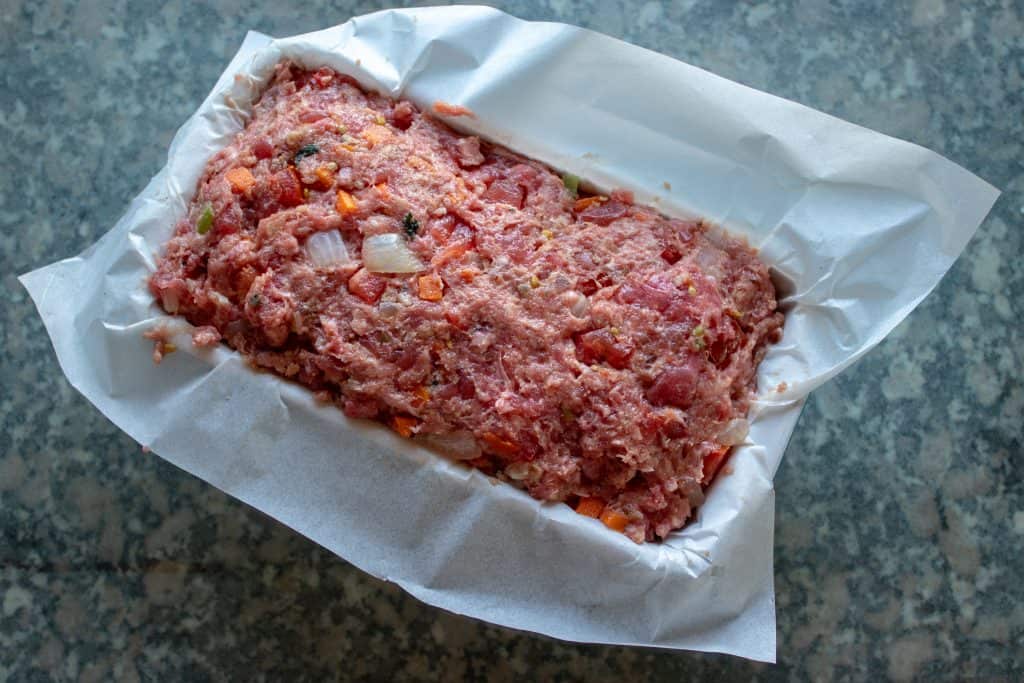 Take a sheet of parchment paper and line the inside of a loaf pan with it. Trim any excess paper so it doesn’t overhang too much, but just enough to be able to grab it to help pull the meatloaf out after it has finished cooking.

Fill the pan with the meatloaf meat and press it down into it to make a loaf shape. 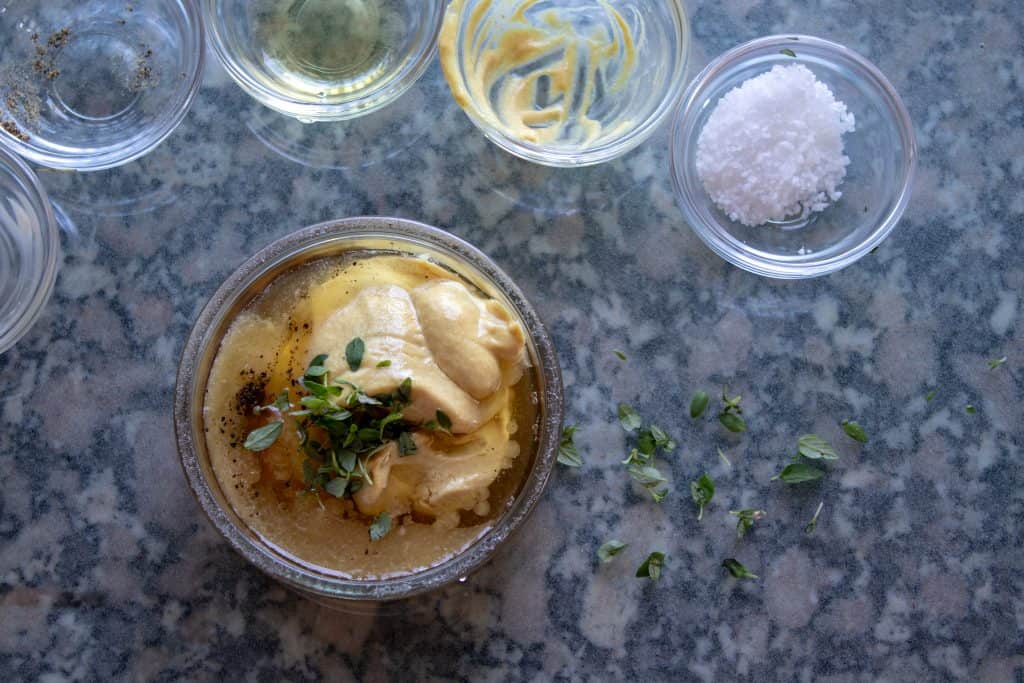 Pour the honey and Dijon mustard into a bowl. Add the vinegar, melted butter, salt, and black pepper to the honey and mustard. Remove the stems from the thyme and add it, whole leafed, to the bowl. 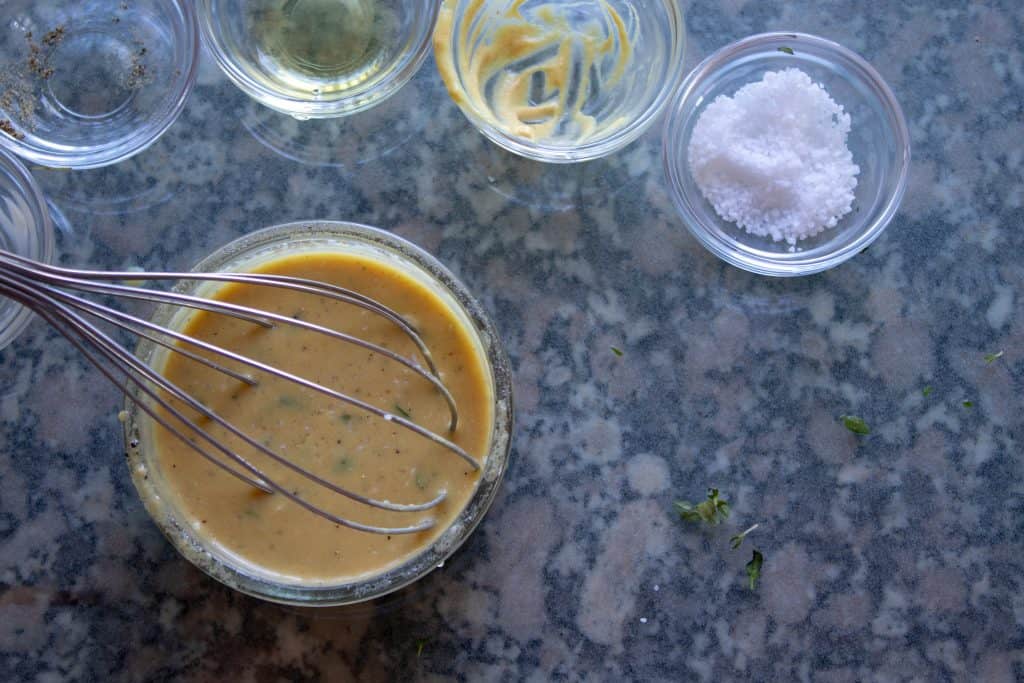 Whisk it all together well, taste, and adjust salt to taste. 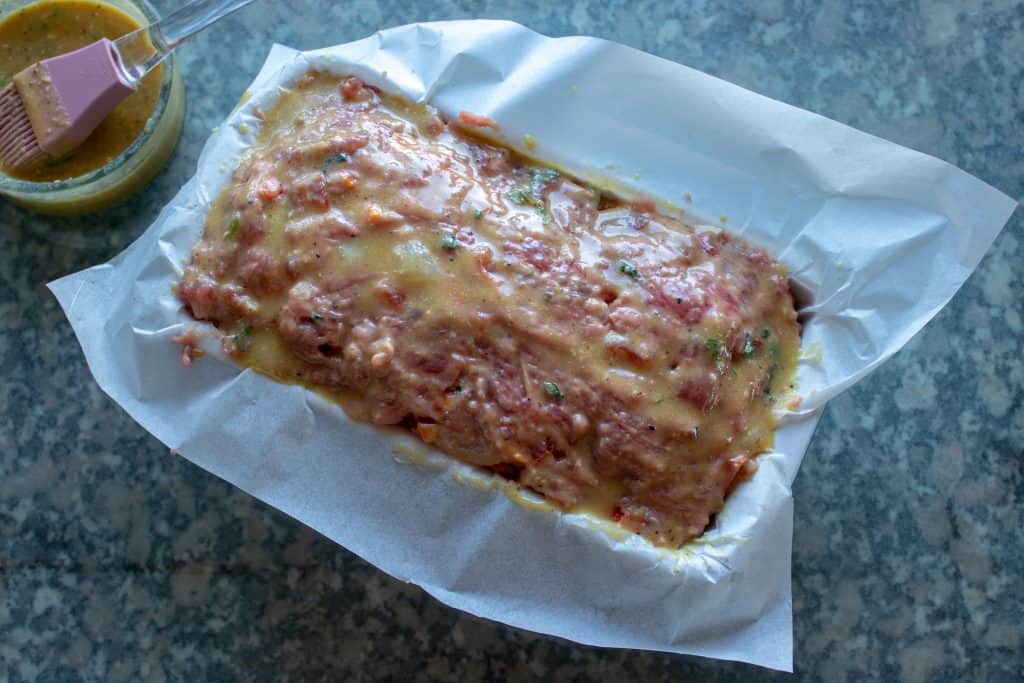 Take a pastry brush and liberally brush the top of the meatloaf with the honey mustard glaze in a thick layer. Reserve the rest of the glaze for a second coat on the meatloaf half way through cooking. 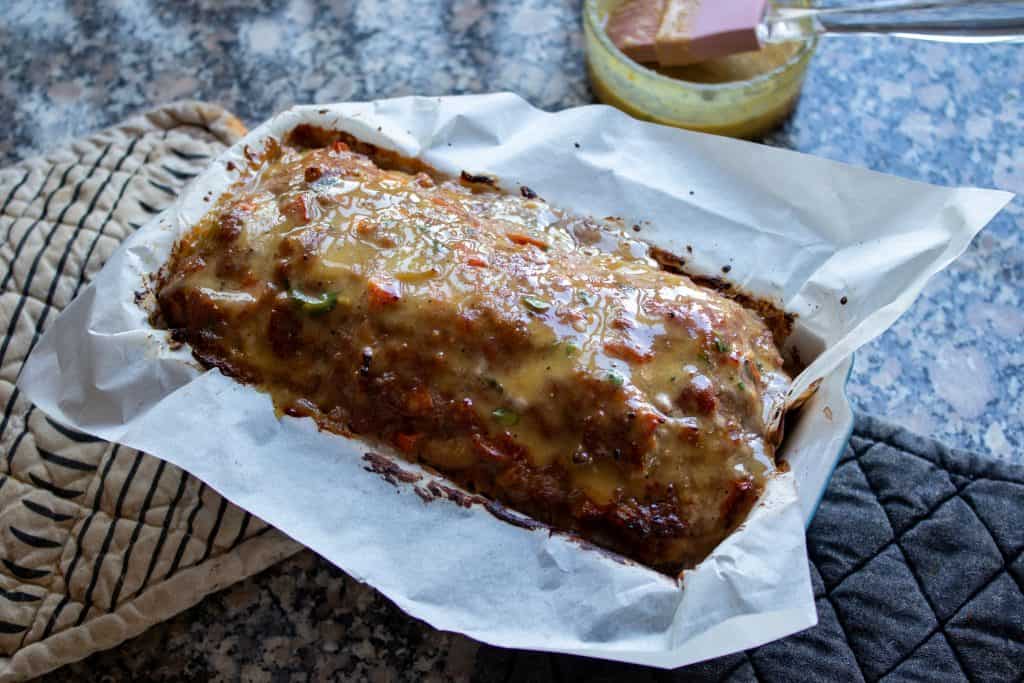 Remove the meatloaf from the oven, and insert a meat thermometer and make sure it reads 145F in the middle.  Allow the meatloaf to cool down at least 5 minutes before removing it from the dish, slicing, and serving. 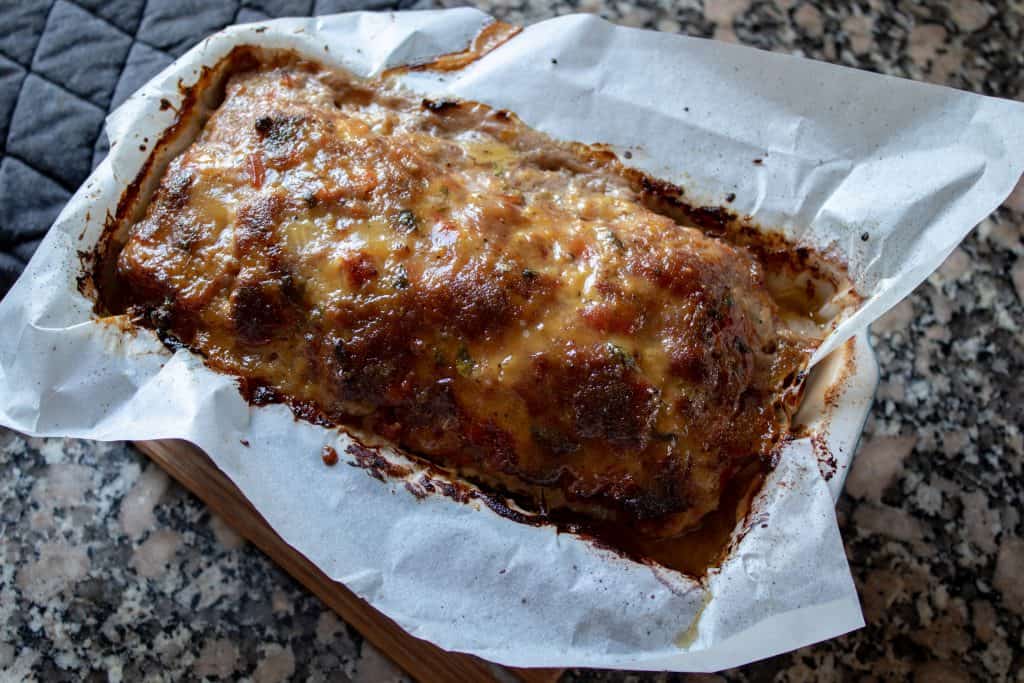 This recipe can be easily changed with different herbs, spices, or switch out diced mushrooms for the tomatoes, especially as the seasons change!

What has been your experience with meatloaf? Good, bad, or indifferent? Let us know!