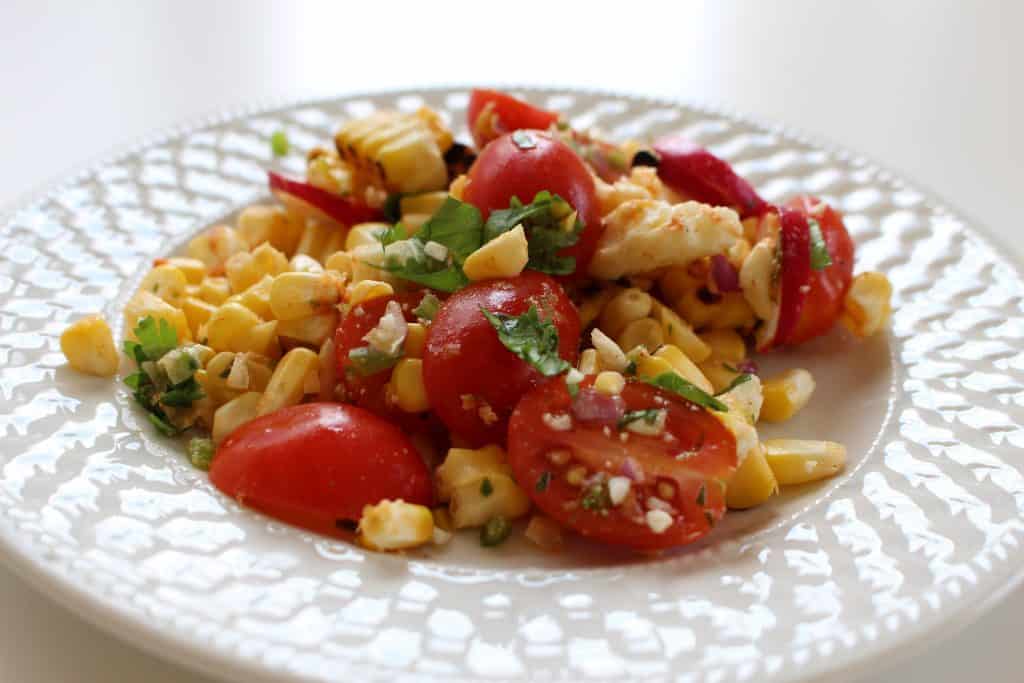 Summer has just about left us, but that doesn’t mean the weather has gotten any cooler. In these final, sweltering days, I cling to late summer produce for refreshing meals that won’t leave me sweating in front of an oven or stovetop for longer than necessary. Sweet corn, that quintessential summer vegetable, can still be found in grocery stores right now and I always feel the need to take advantage of it before it disappears for good (or, at least, until next year).

This fresh corn and feta salad is one of my go-to summer dishes. Inspired by delectable Mexican street corn, this dish is rife with bright, vibrant flavors: the smoky-sweetness of the charred kernels and paprika, the acidity of the lime, and the salty tang of the feta mix together to create an addicting salad that could just as easily serve as a main course as an accompaniment to a larger meal.

This recipe is all about doing things to your taste. Feel free to vary the amounts of any of the ingredients as you prefer. You can also substitute ingredients. Don’t like cilantro? Try parsley or even scallions as an alternative. Or you might use cotija cheese instead of feta to really play up the street corn flavors (or no cheese at all if you want to make the dish vegan). These flavors are forgiving, so you can really let your creativity run wild here. 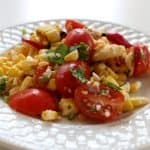 STEP ONE – SHUCK THE SWEET CORN

Shuck the sweet corn by stripping the green outer leaves from the cob beneath and discarding them. Remove the thin, wispy hairs from between the kernels. Then gently run the cobs under cool water to wash them and pat them completely dry with a towel. 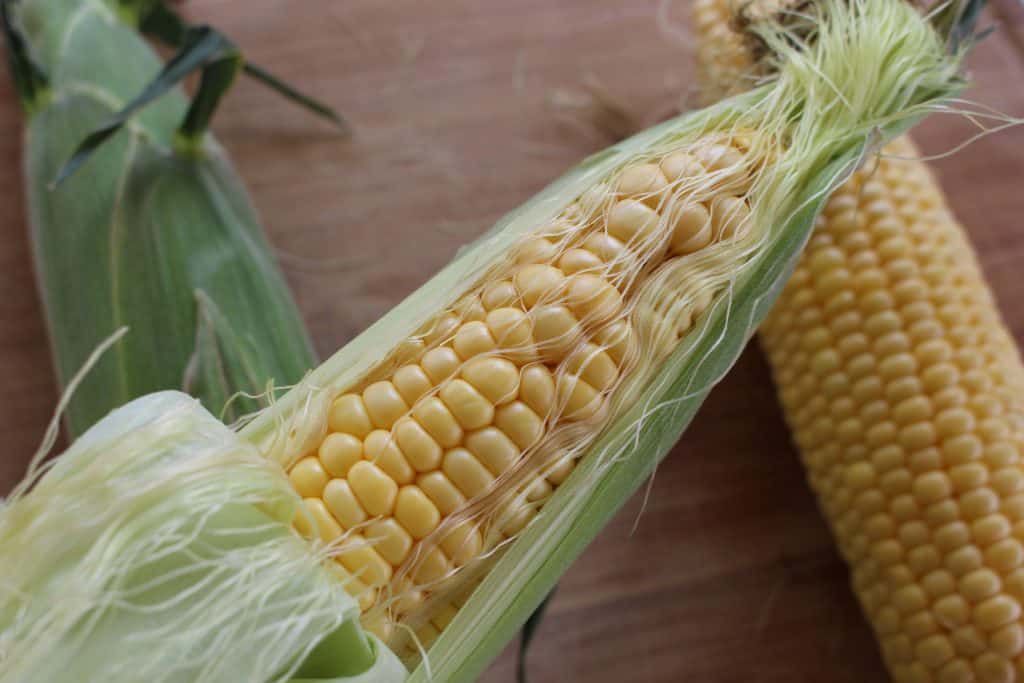 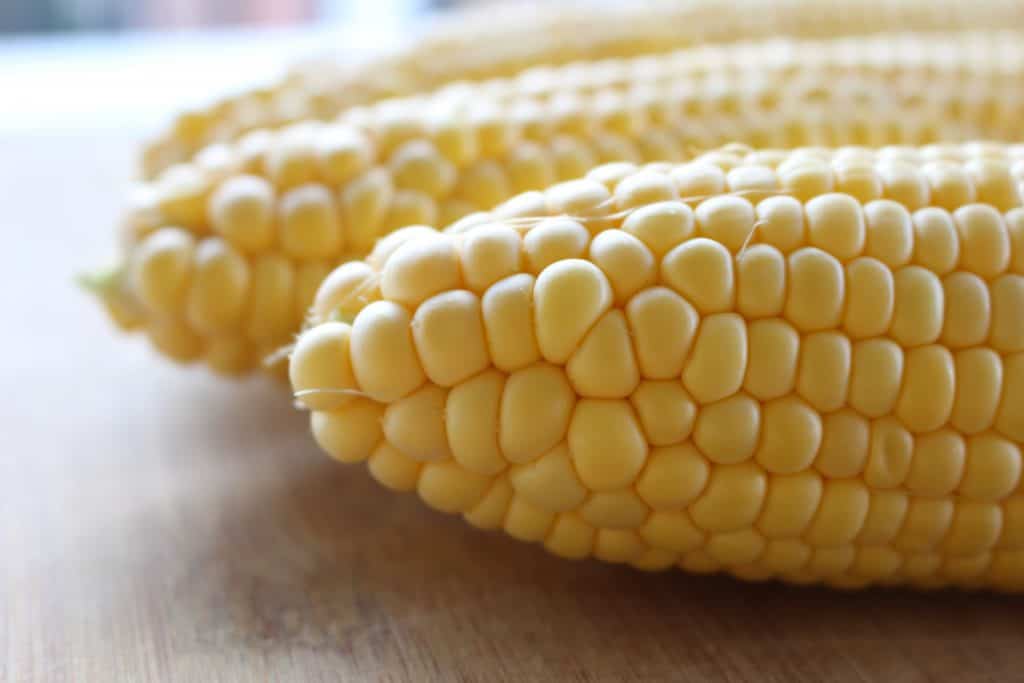 Turn on your grill to medium-high heat. Place the corn cobs on the grill and let them cook, turning them every minute or so, for 8 to 10 minutes. If you don’t have access to an outdoor grill you can use an indoor grill; you can also use a cast iron or nonstick skillet on medium-high heat to sear and char the corn cobs. Grilling or searing the corn imparts a smoky flavor and adds that aesthetically pleasing black char to the exterior of the kernels. 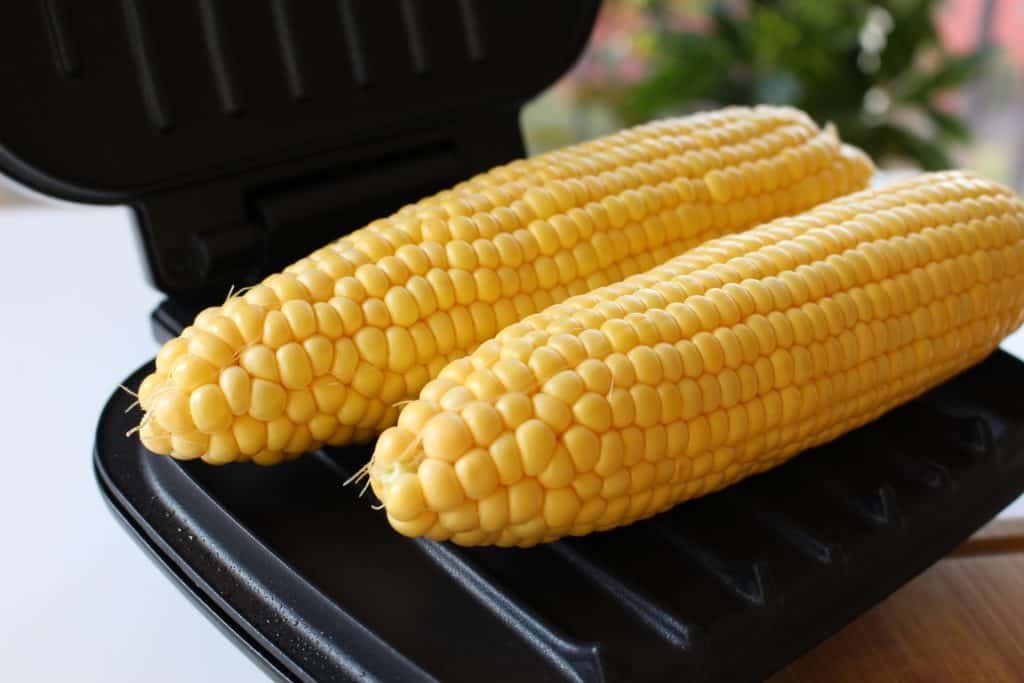 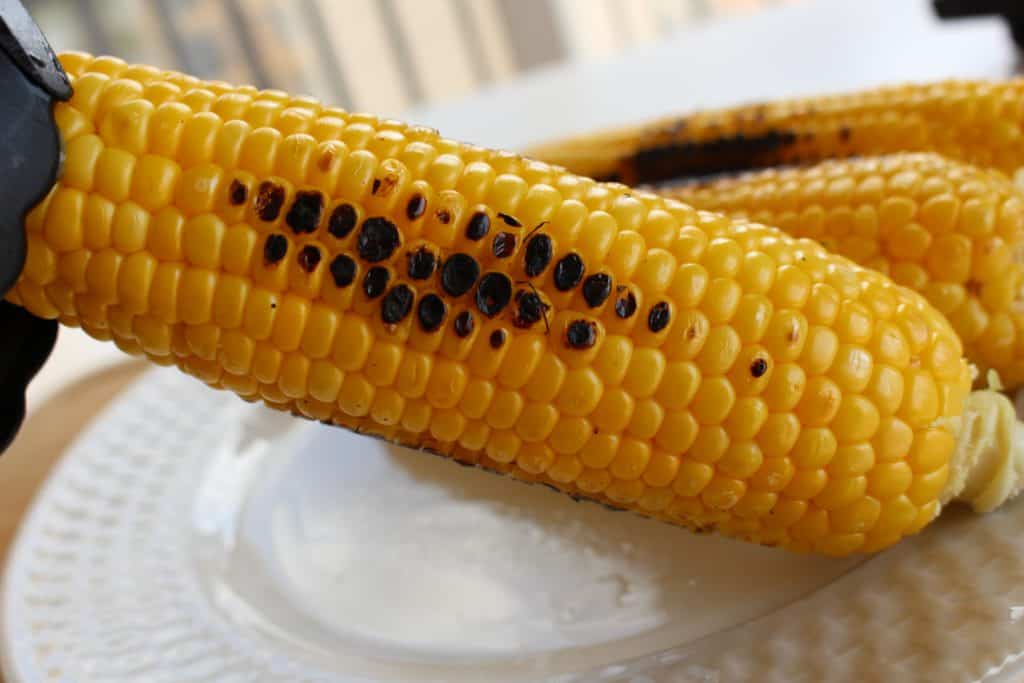 Let the corn cobs cool enough so that you can handle them. Stand them up on one end on a cutting board or in a bowl (you can slice one of the ends of the cob flat if you need to) and, with a sharp knife, cut downwards to shear the kernels off the cob. Remove all of the kernels from each of the cobs, then transfer the kernels to a large bowl. 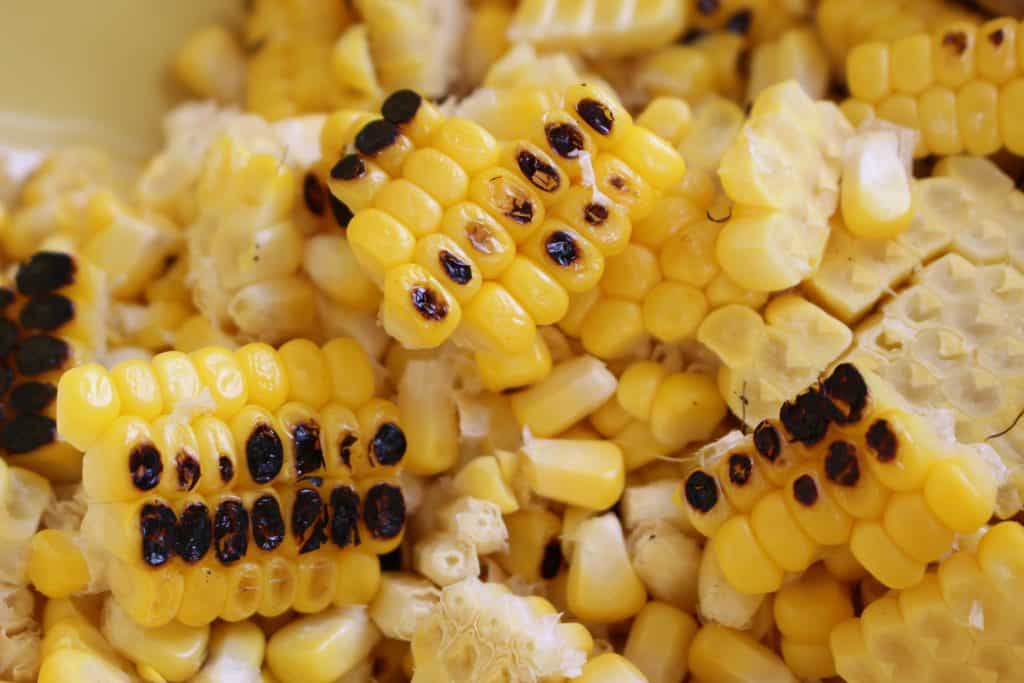 Chop the red onion, deseed and mince the jalapeño, slice the tomatoes in half and thinly slice the radishes. Add these vegetables to the large bowl with the corn. Then shake out 3/4 cup of crumbled feta cheese on top and mix thoroughly. (You can add more or less feta according to your tastes, or omit it completely to make the dish vegan.) 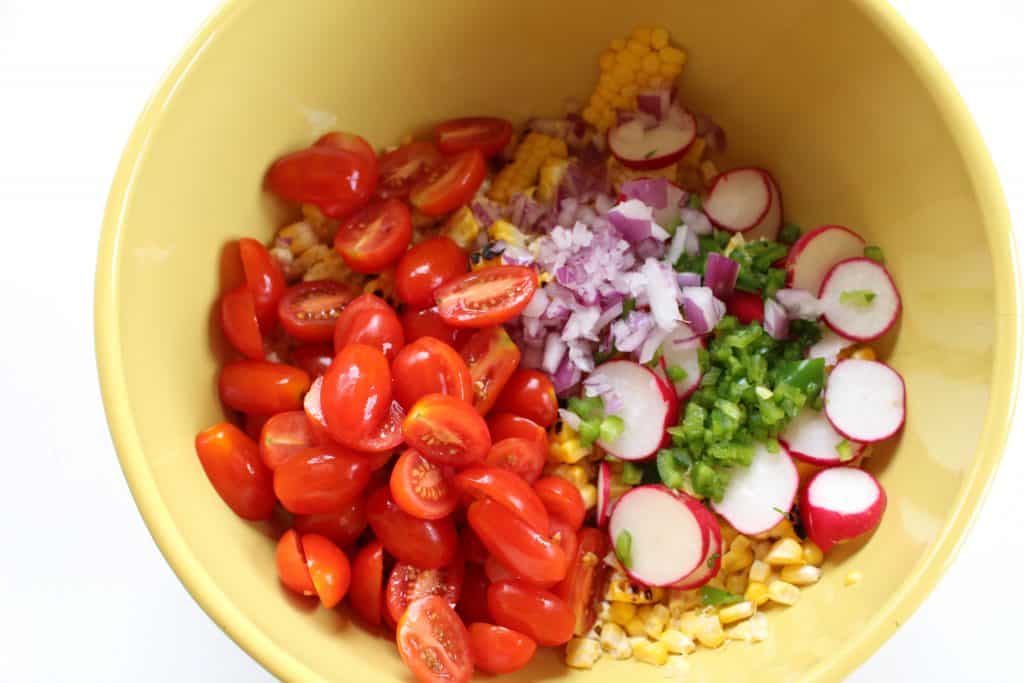 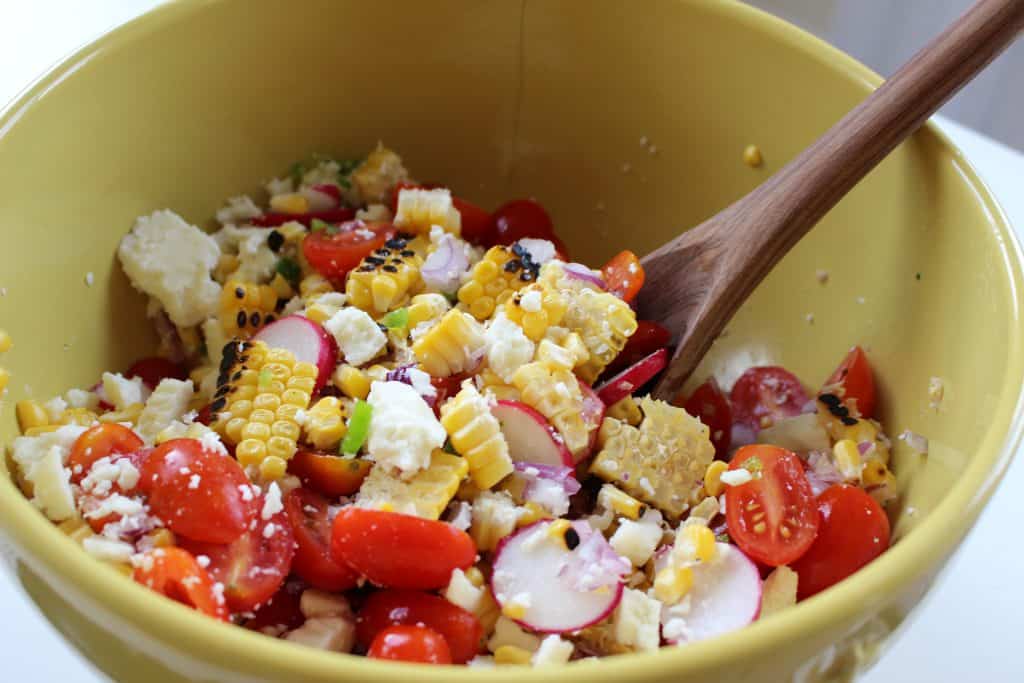 Zest the lime using a fine-holed grater, then slice it in half. Add the zest and squeeze the juice into the large bowl with the rest of the ingredients. 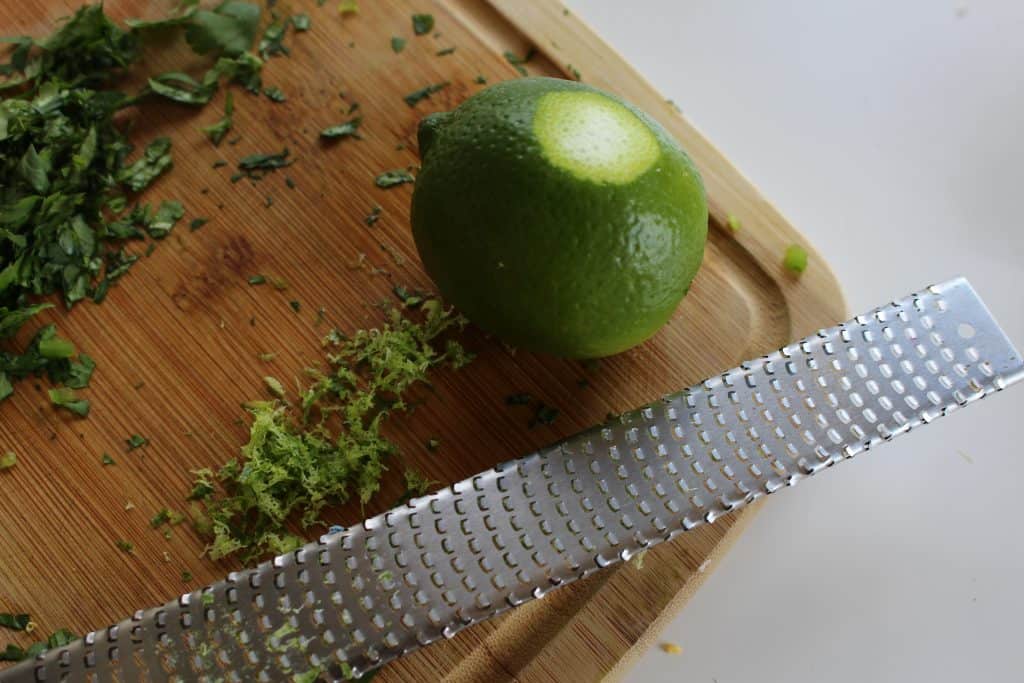 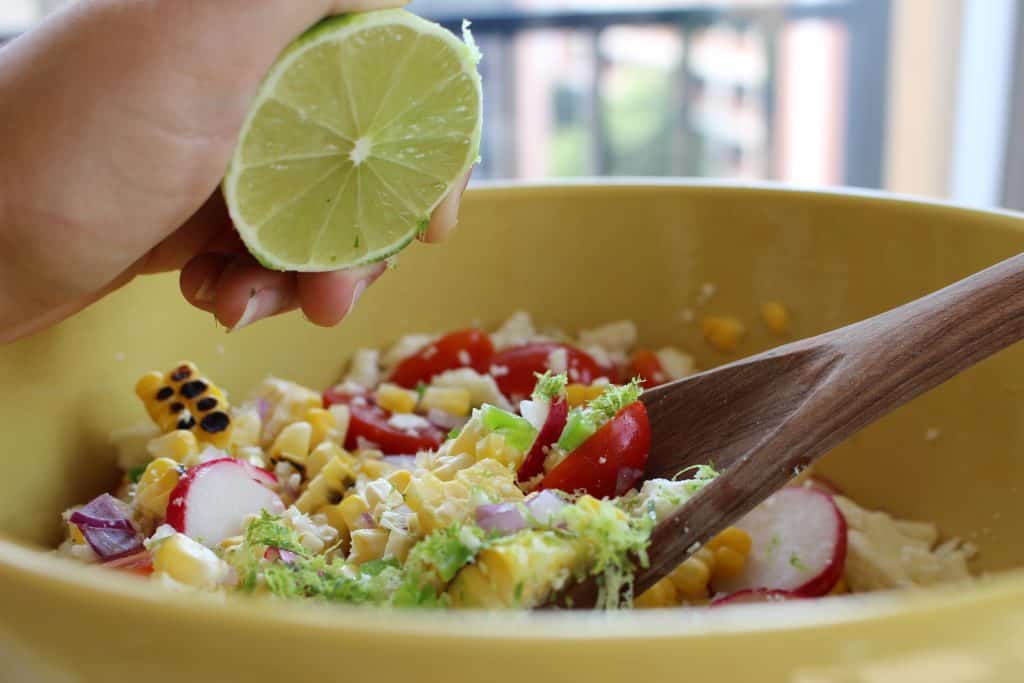 Drizzle the olive oil over the ingredients, then sprinkle in the chopped cilantro. Season the salad with ¼ tsp salt and ¼ tsp smoked paprika. Stir well and taste, adding more seasoning as desired. 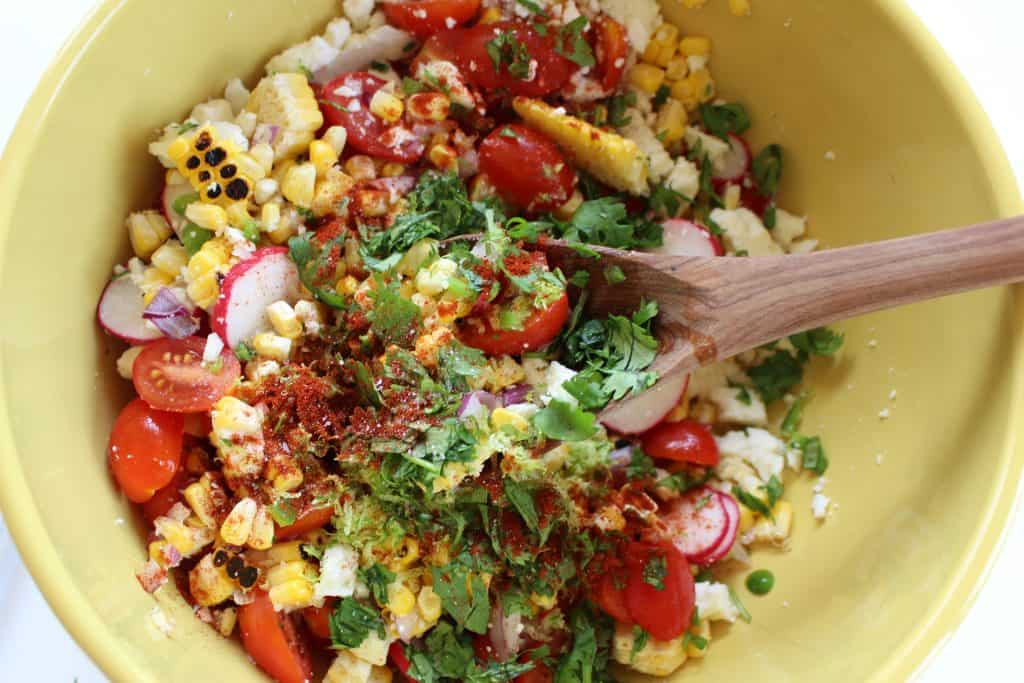 Serve the salad immediately, or refrigerate and serve cold or room temperature. In an airtight container this salad will keep up to two days in the refrigerator, though it should be eaten as quickly as possible for maximum freshness.

If you want to serve this dish as an entree, it might benefit from a topping of sliced avocado and grilled shrimp for extra fat and protein. As a side dish it goes excellently with tacos, fish or chicken kabobs, or almost any kind of grilled meat. It also makes for an incredible potluck dish: bring it to your next barbecue or picnic for a fresh, veggie-forward addition to the table. Regardless of how you serve it, you’ll be basking in the delicious glow of summer’s final bounty.

How will you make your version unique? Tell us in the comments below!