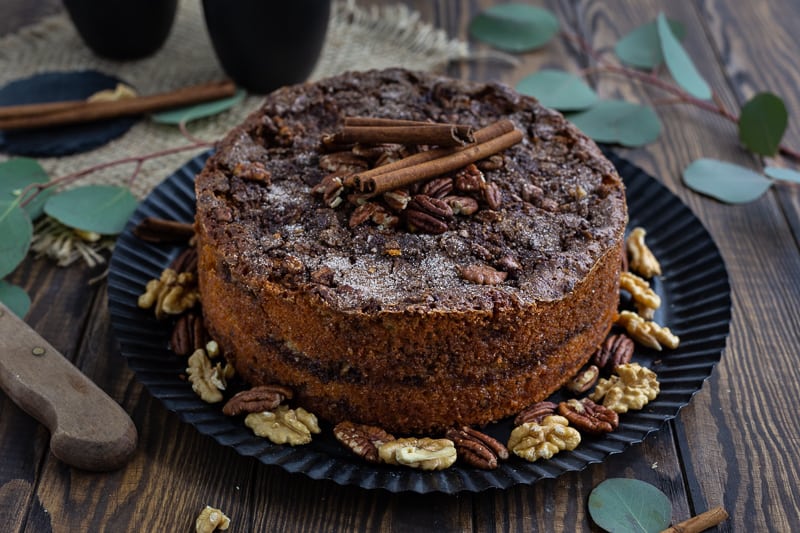 I love a good cinnamon roll, whether for my 4 o’clock afternoon coffee or simply any time of the day. However, the elaborate work that goes into those fluffy rolls has me skipping out on them most of the time. This cinnamon swirl cake is the answer to my dilemma. The taste instantly reminds you of cinnamon rolls and definitely satisfies those cinnamon cravings. Plus it’s an easy cake that you can whip up for those spontaneous guest visits that will have any dessert lover going back for seconds!

Don’t let the humble exterior of this cake fool you. It’s packed with cinnamon, vanilla and crunchy pecan flavour. The crispy cinnamon sugar topping is a delightful contrast to the soft and moist inside of this cake. In addition, the cinnamon sugar swirl creates a pretty presentation when sliced into pieces.

What makes a cake a coffee cake? 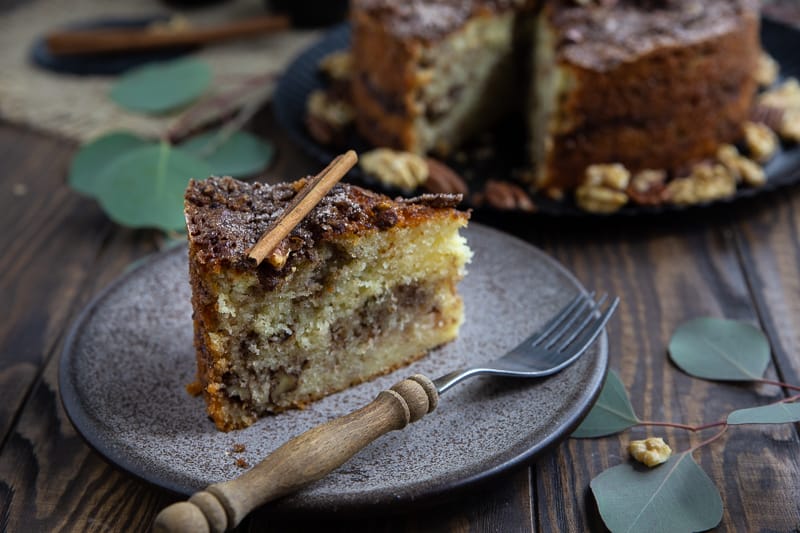 The term coffee cake is used quite loosely to describe a variety of cakes, usually containing cinnamon or fruit. Coffee cakes have been around since the 17th century, when Europeans enjoyed sweet cakes alongside their coffee. Traditionally, coffee cakes contained yeast, dried fruit and sweet spices. While today’s coffee cakes are quite different from their origins, each country also has their own version of a coffee cake. British varieties are filled with a flavoured buttercream while American coffee cakes often come in the form of a sheet cake or contain a streusel topping. Austrians like to bake their coffee cakes in the shape of a bundt cake, calling them Gugelhupf. To keep it short, coffee cakes or whatever you want them to be (as long as you enjoy them with your coffee that is). 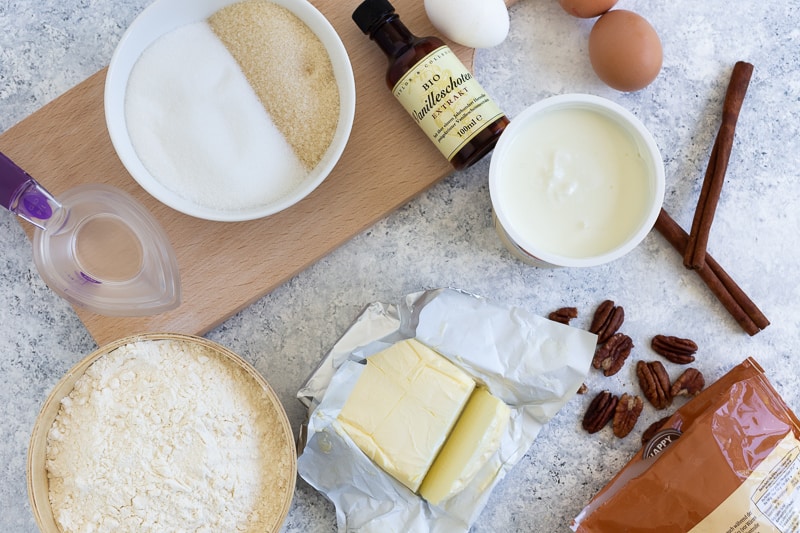 Our cinnamon swirl cake contains simple ingredients you probably have sitting in your pantry right now. If you do not have any pecans on hand, feel free to substitute them for walnuts or even almonds. Be sure to use room temperature ingredients so the batter creams together nicely, resulting in a fluffy and moist cake. Because we are using a lot of moist-makers (butter, yoghurt and milk) in our batter, the cake stays soft for up to 4 days (be sure to store it in the fridge after 2 days). It’s an ideal cake for making ahead if you know you have guests coming over or need a dessert for a potluck dinner. 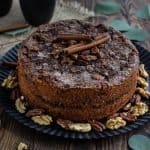 The cinnamon swirl coffee cake can be made ahead and stored in an airtight container to keep it fresh. It keeps for up to 4 days and freezes well up to 4 months. If making it ahead, add the garnishes shortly before serving to keep the pecans crunchy. 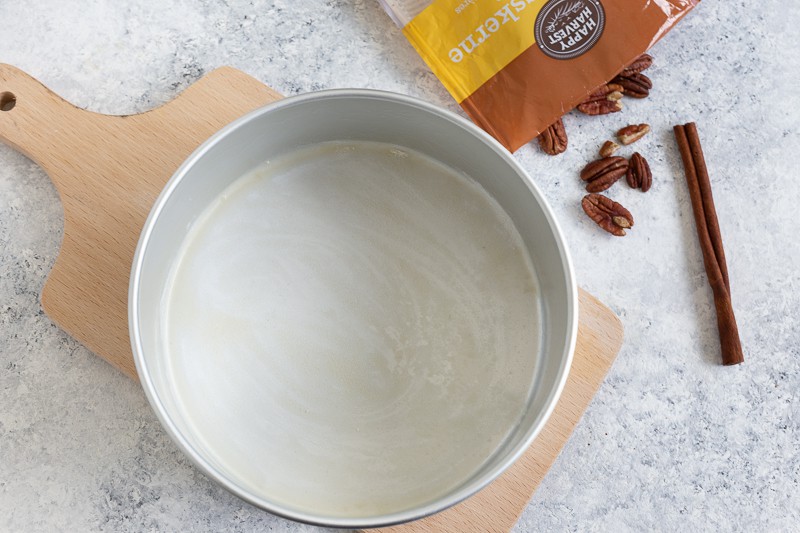 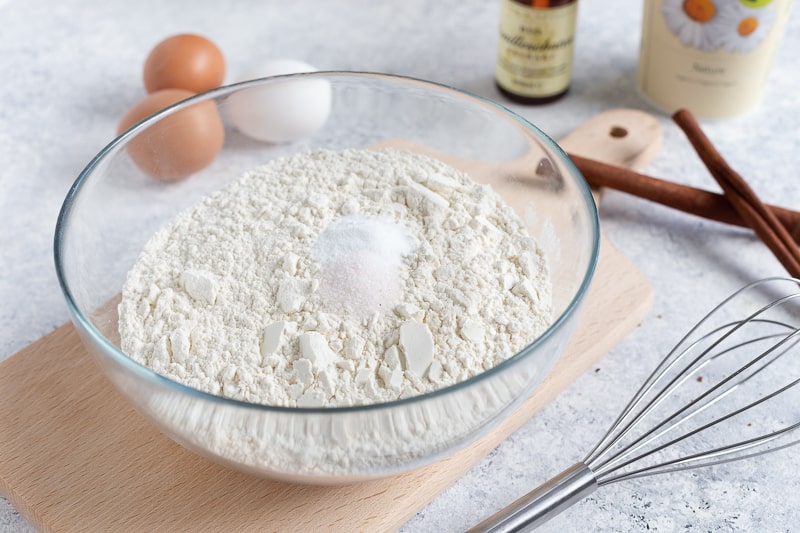 Whisk together the flour, baking soda and salt until well combined. 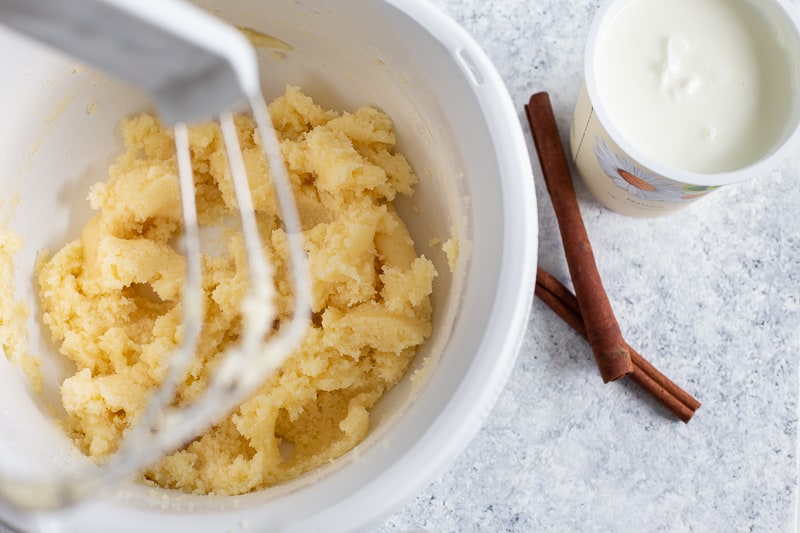 Using the stand mixer fitted with the paddle attachment, cream together the butter and sugars until fluffy, about 2 minutes. Then add in the vanilla extract and eggs. 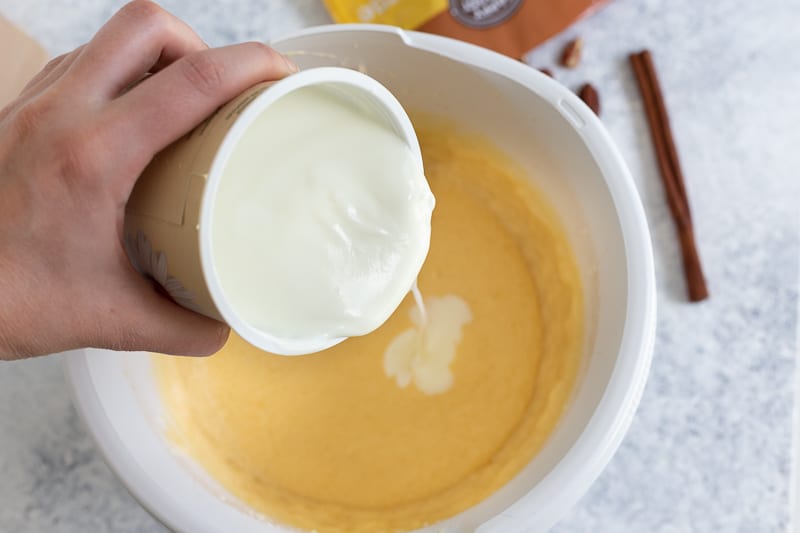 With the mixer running on low speed, add 1/3 of the flour mixture and 1/3 of the yoghurt and milk and repeat in the same pattern two more times. 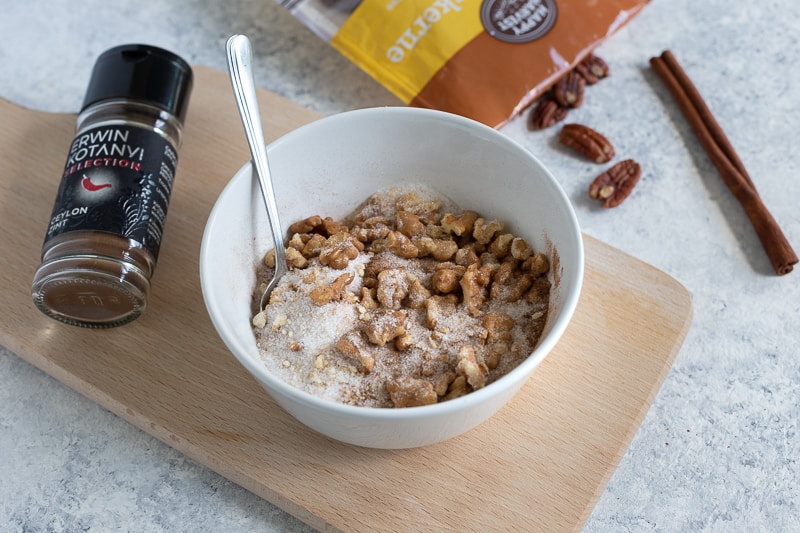 To make the cinnamon mixture, combine the sugar, cinnamon and half of the chopped pecans in a bowl. 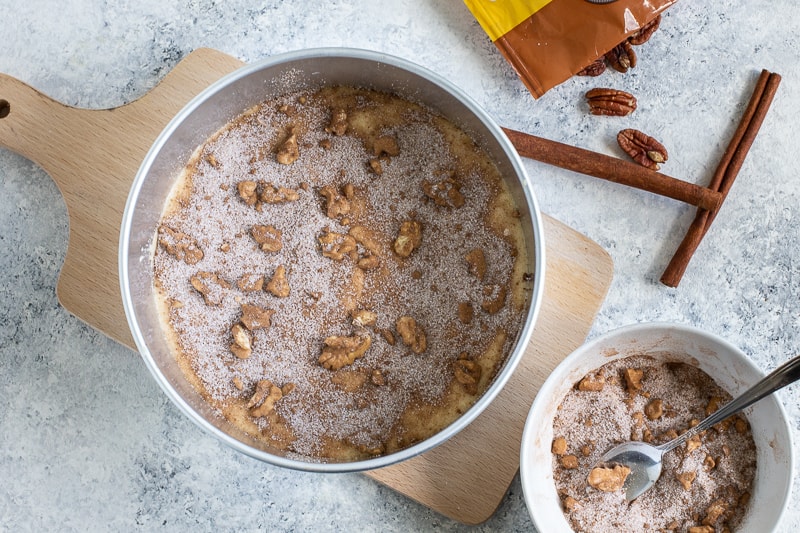 Fill 1/3 of the batter into the cake pan and sprinkle with 1/3 of the cinnamon mixture. Repeat two more times. 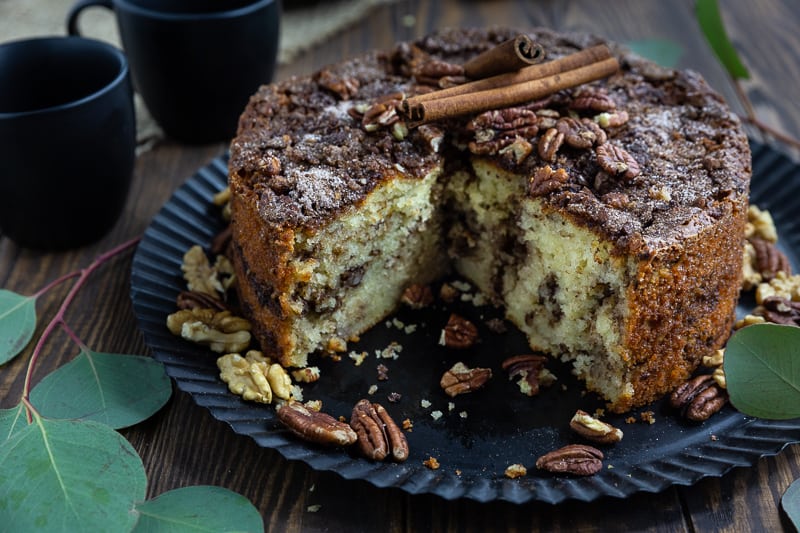 Bake the cake for 1h – 1h 5 min, or until a toothpick inserted comes out clean. Let the cake cool completely. Garnish the cooled cake as desired with the rest of the chopped pecans and/or cinnamon sticks.

The best way to enjoy this cinnamon swirl coffee cake? You guessed it, alongside your coffee (or tea)! If you want to go all out you can even add a dollop of whipped cream. But honestly, this cake is already so good, it doesn’t need any additions. Try it and see for yourself. Happy baking!