The game of softball was invented in 1887, in Chicago. It is very similar to baseball, except that it is played with a larger ball and on a smaller playing field. Originally it was an indoor sport. There were many different names for the game before it was called softball. Some of the names it was known by were indoor baseball, playground softball, mush ball, and kitten ball, and originally, it was only played by women. The game became a women’s Olympic sport in 1991, and is played by millions of women the world over. An interesting fact is that although the game is called softball, the ball is in fact very hard. It is quite a bit larger than a baseball which measures 9″ in circumference. A softball measures 12″ in circumference. Softball is now played on every continent in the world. 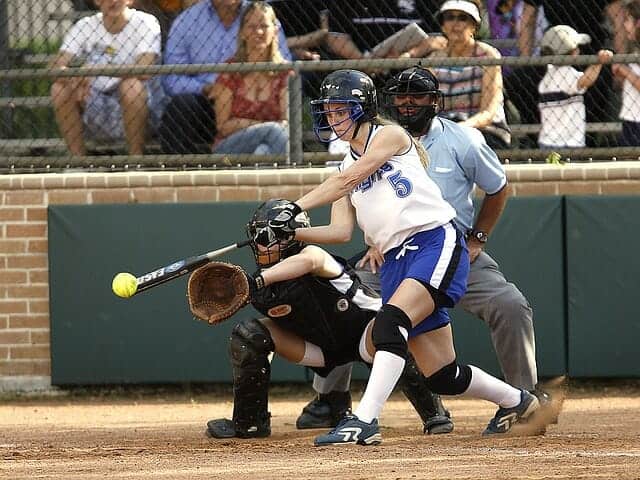 Softball is a sport which is played using a bat and a ball. There are two teams which compete against each other. The game is very similar to baseball, although there are some very striking differences. Softballs are larger than baseballs, and the pitches are thrown underhand instead of overhand. The game of softball is also played on a diamond which is smaller than baseball.

There are normally 9 or 10 players on the field at the same time. The field has four bases, namely first base, second base, third base and fourth base or home plate. Very close to the centre of this square is the pitchers circle, and inside that area there is a ‘rubber’ which is a small rectangle area.

The object of the game is to score more points – or runs – than the other side, by batting the ball into play and then running from the first base to the last base. Each base must be touched as the player passes it. The game has one or more umpires.

Slow-pitch softball: the ball can measure either 11 or 12 inches in circumference, depending on the age of the players. The ball must arch on the way to the batter. There are 10 players in a team.

Fast-pitch softball: there are nine players in a team and the ball is pitched very fast. Bunting and stealing are allowed with this type of softball.

Modified softball: this type allows the pitcher to throw as hard as possible but with a restricted back swing. The ball must be pitched underhand from 46 feet for men and 43 feet for women. There are only seven innings instead of nine is in a regular game.

In some parts of the world, the winters are far too harsh to be practising outdoors. However, it is important that players keep doing drills in preparation for the season. Gymnasiums are the perfect places for drill sessions to be held as they have plenty of space and are protected from the elements.

While it is very difficult for players to get real practice against a live pitcher indoors. It is possible for them to stay in the hitting mode by hitting off a tee and taking batting practice while using a machine.

Often coaches will begin the season with indoor coaching as it is easy to spot mistakes in smaller spaces than out on a large field.

According to an article about indoor softball drills you can see that these are very easily carried out in any small space.

Work on these to be a good hitter:

Every new softball player needs a set of new items to play in. Here’s a box set which will make a great gift to that young player.

This is the perfect back pack to carry all your gear in.

For practice sessions where you need extra balls, this pack of soft training balls is just what you need.

A great fast pitch bat for a youngster to own.

To get extra strength in those hands, this exercise gripper is the perfect tool for the job.

Despite the origin of the game of softball as an indoor game, it is a wonderful way to spend time outdoors with friends and family. Whether you choose to just play the game for recreation or whether you decide to take it up as a profession, softball is a game which is a lot of fun for all who play it. While there is a huge amount of work involved for anyone taking the professional route, if you set your mind to it, the game will reward you in ways you never thought it would. Softball is not only a great way to meet other people, but an excellent way to keep fit, stay in shape and have fun.