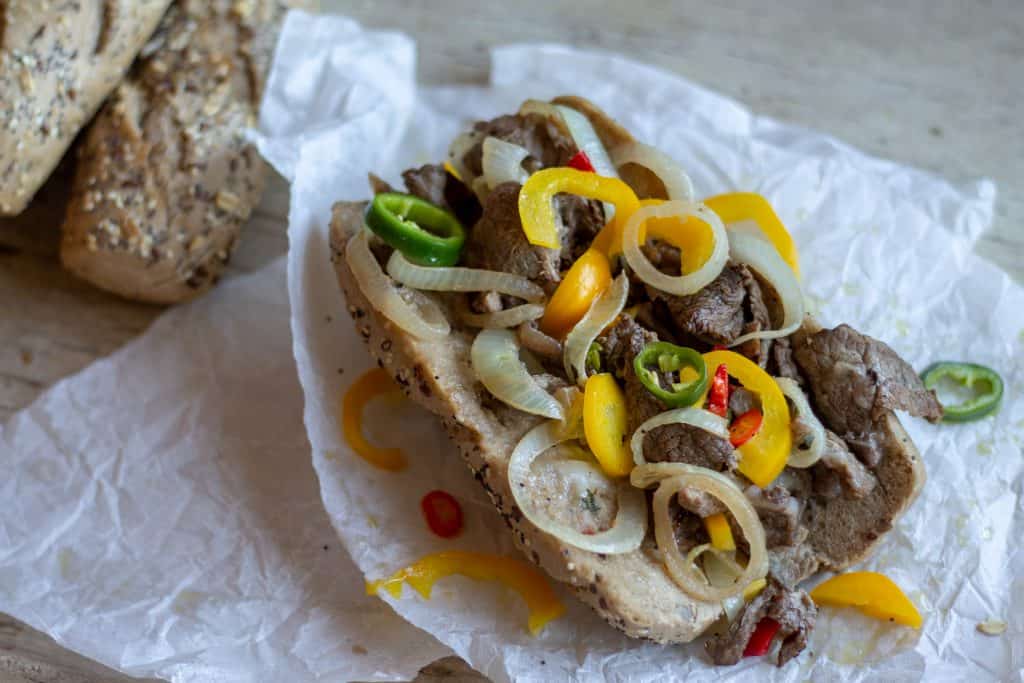 This is not a classic Philly cheese steak recipe. A true cheese steak sandwich from Philadelphia is something exclusive to its location, save for a few rare sandwich shops speckled around the US. This leaves few options to those far from the north east corner of the country, and in particular, to those of us around the world who often are afflicted with an acute culinary homesickness for a bite of America. So, to alleviate such hunger we must adapt to our current situation.

When adaptation is the only way to fill a food craving, the idea isn’t to change everything, it’s to come as close to the sense memory of the best version you had in the past. If successful, that means you get something very close, but, more often than not, includes a bit of nostalgia as an unintended ingredient. If luck is with you, however, you may wind up with something different enough to allow it to be branded with new memories while keeping the essence of the original idea intact. This Philly cheese steak sandwich does just that.

It’s not an easy task to create a recipe that can accomplish that goal. The first step is to figure out what must be there, and how it can be shaped to be similar but different. For such a sandwich there are three main elements and, in this case, an extra that is not a “must have” but a highly suggested “should have”; meat, cheese, bread, and peppers.

Thinly sliced beef is first on that list, and while it can be substituted with other meats, it’s what the classic calls for. The classic does not call for the cheapest cut of beef you can find, which is often tough and chewy if not treated properly. So instead of the pricy traditional rib eye, I used an acidic, herby, marinade to break down the firm fibers of the meat into slices of tender lightly sweet but unquestionably savory sandwich meat.

Next is the cheese. Purists believe that only an orange oozing melted cheese or pale slices of provolone will do for a true Philly cheese steak sandwich. I always have been the provolone type, but it’s a rare find for me. Goat cheese, on the other hand, is always readily available. Slices of firm earthy goat cheese turn this from an almost-but-not-quite-right reminder of home into something that will satiate the sandwich craving.

Last of the fundamentals is the bread. This, for many, is what makes the Philly cheese steak sandwich authentic. Unfortunately, the amoroso roll isn’t available to the hungry masses outside of that area usually. I fully believe they’d be a fantastic addition if they weren’t so scarce, but I found a substitute that works and probably help to make this less likely to create a longing for the old times.  Crusty on the outside, soft on the inside, whole wheat hoagie type rolls do the trick. They soak up the steam from the hot meat while cooking, and soak up the juices without falling apart.

The cherry, or rather pepper, on top is a handful of quickly prepared hot and sweet pickled peppers. These take less than 5 minutes to make and the combo of sweet, sour, crunchy, and spicy elevates and pulls together the rest of the sandwich in a way that truly makes it stand out from the classic it originated from.

If all of that doesn’t make you want to try your hand at creating something new, but still inspired heavily from something old, I don’t know what will! 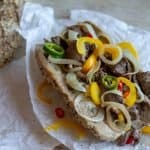 Notes
Spice, isn’t your thing? Remove the seeds and white pith from the jalapenos or leave them out entirely!

STEP ONE – PREPARE THE MARINADE 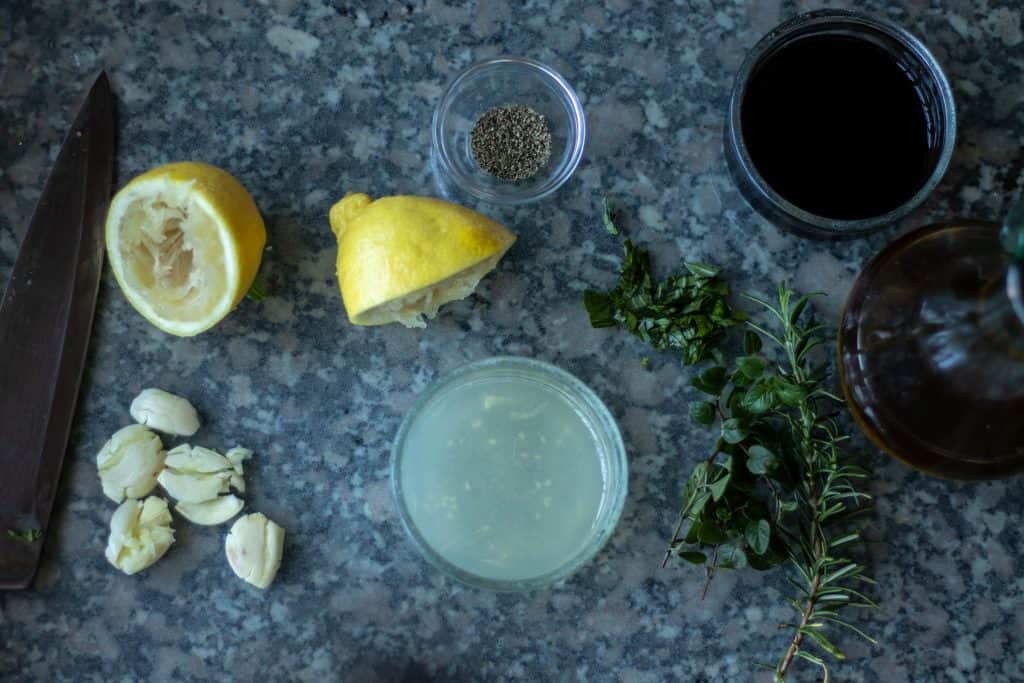 Place the garlic on a cutting board and lay a chef’s knife on top of a clove. Press down on the knife, crushing the garlic between the blade and the cutting board and trim off the root end. Cut the lemon in half and remove any seeds. Squeeze the juice from each half of the lemon into a bowl. Run cold water over the rosemary and oregano to remove any dirt or debris then shake off the water. Roughly chop the basil leaves. 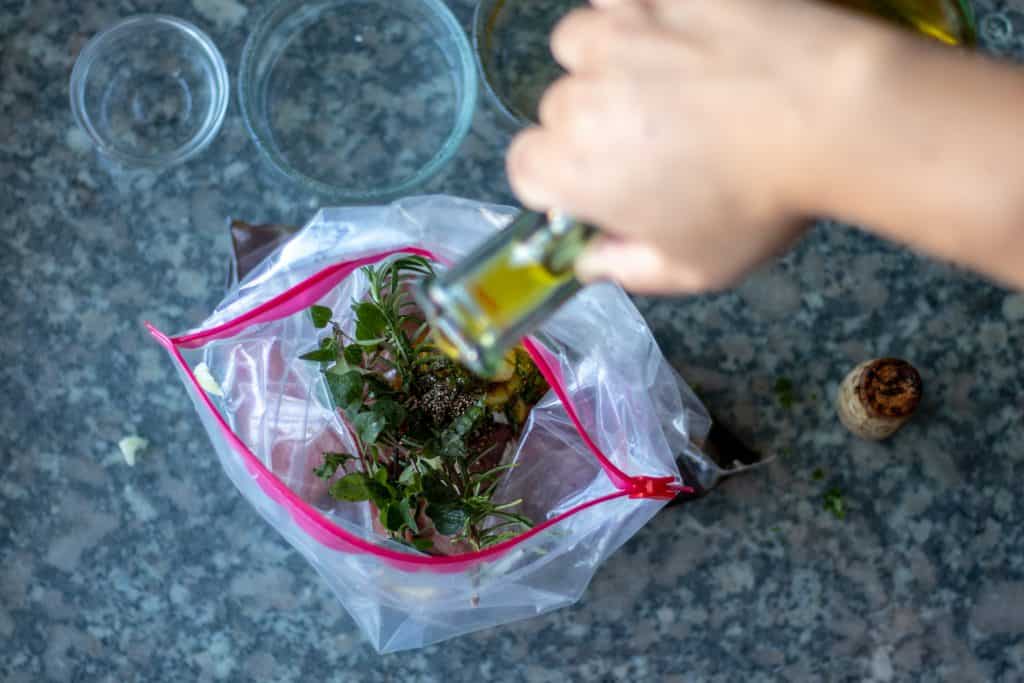 Put the beef into a sealable bag and add in the garlic, herbs, Worcestershire sauce, lemon juice, olive oil, and black pepper. Seal the bag and massage the meat around with your fingers to coat it well. 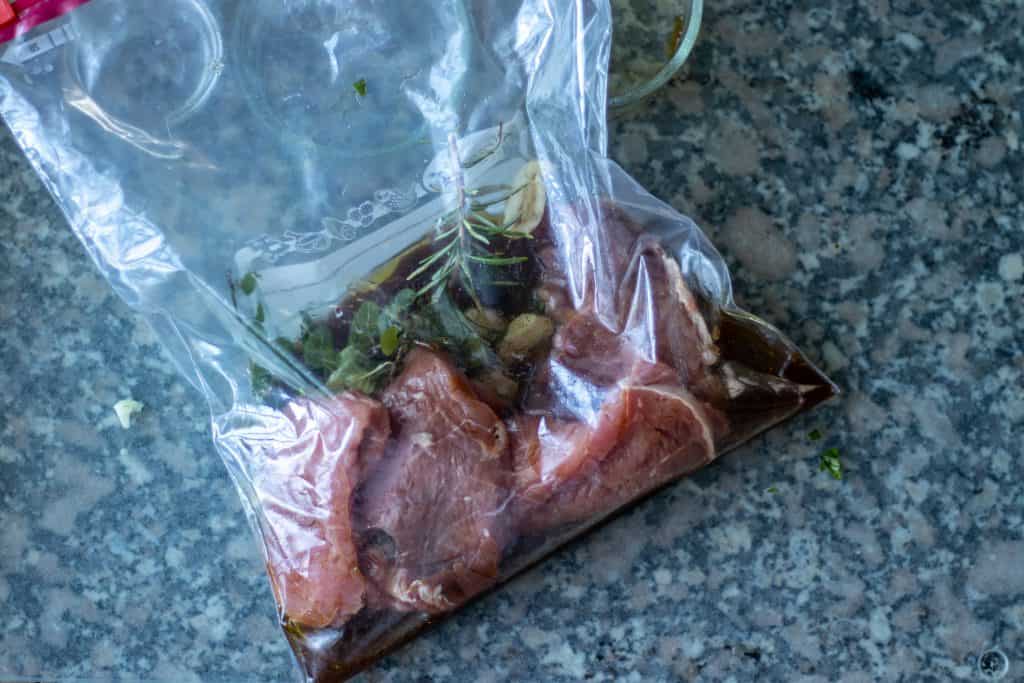 Put the bag in another container and place it in the refrigerator to marinate at least 6 hours to overnight. 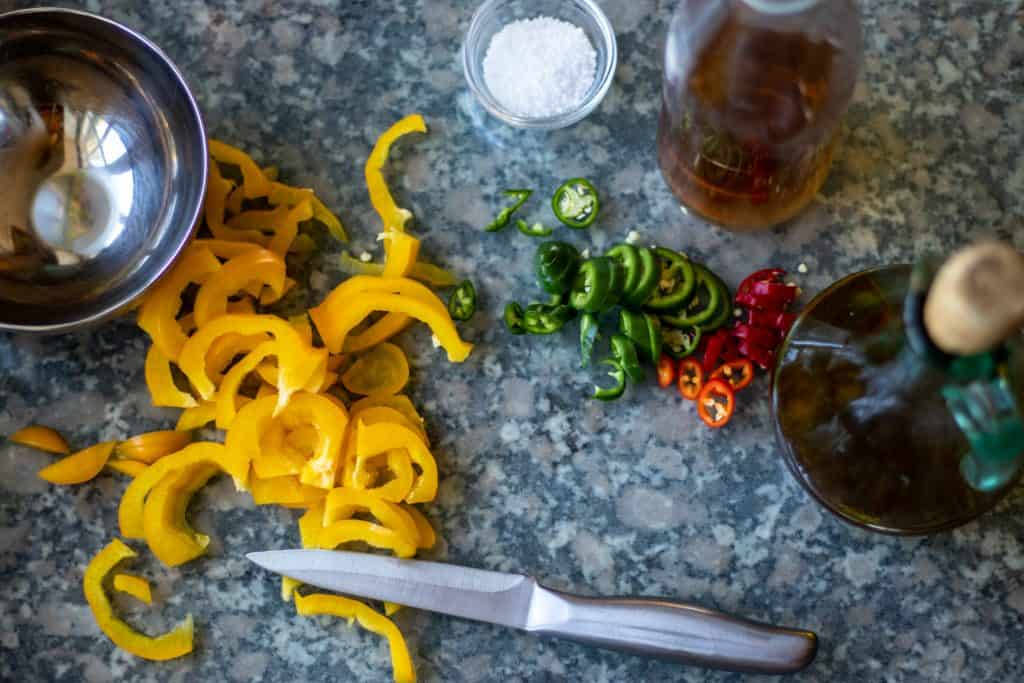 Cut the tops off the peppers and remove the stems. Cut the yellow pepper into thin strips and the green peppers into thin rounds. Carefully remove the stems from the red jalapeno peppers and thinly slice them into rounds, making sure not to touch the white membrane inside or the seeds with bare hands. Use gloves if necessary. 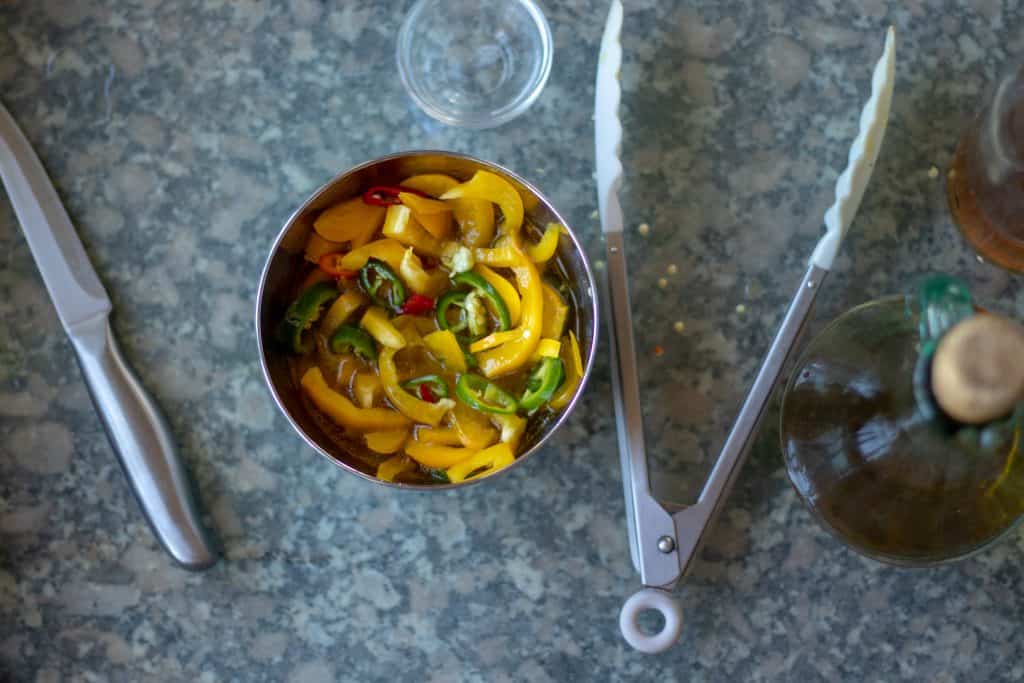 Put all of the sliced peppers into a bowl and add the vinegar, olive oil, sugar, and salt to it and stir well.  Cover the bowl and refrigerate until ready to use.

STEP FIVE – FREEZE THE BEEF AND SLICE IT 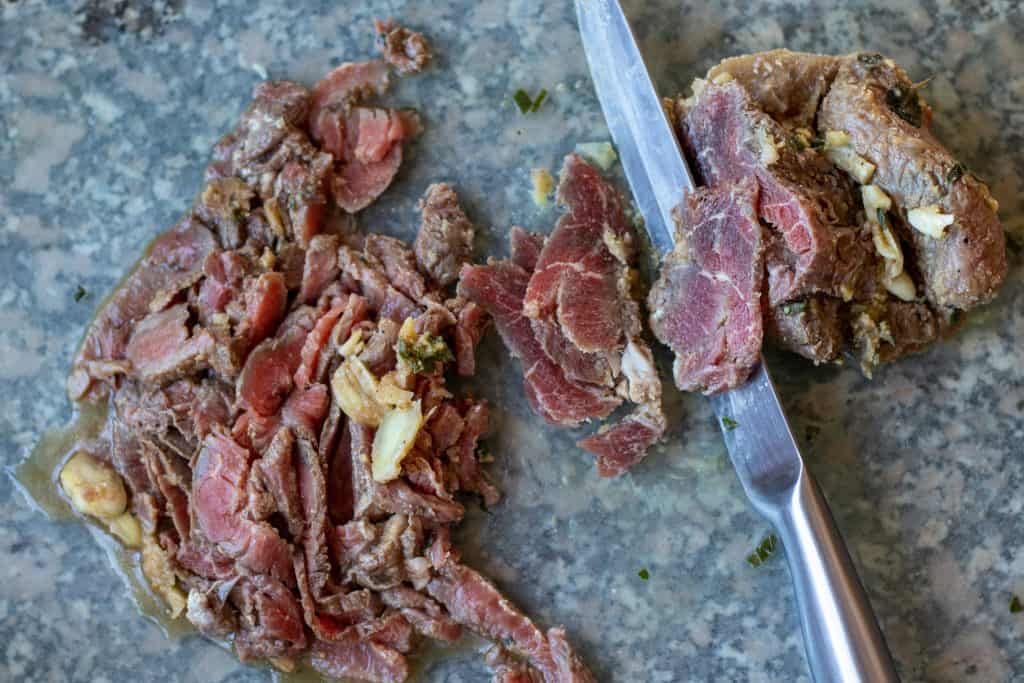 Remove the marinating beef to the freezer about 2 ½ hours before cooking to firm it up before slicing. After 1 hour, it should be firm enough. 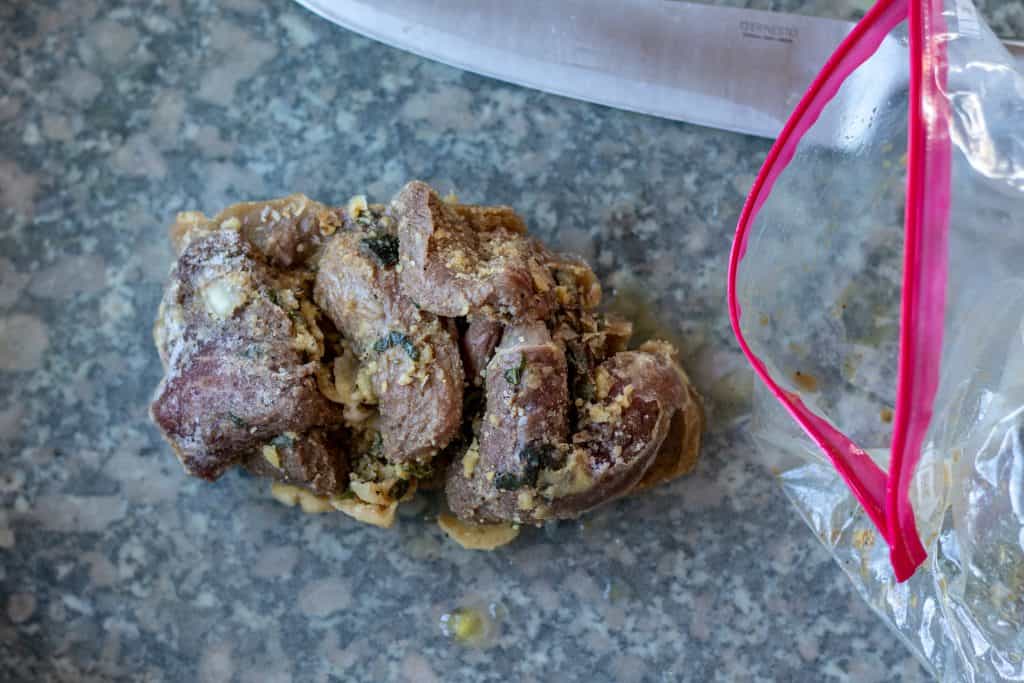 Put the hardened meat on a cutting board and slice it as thinly as possible with a sharp knife. Transfer it into a medium sized bowl. 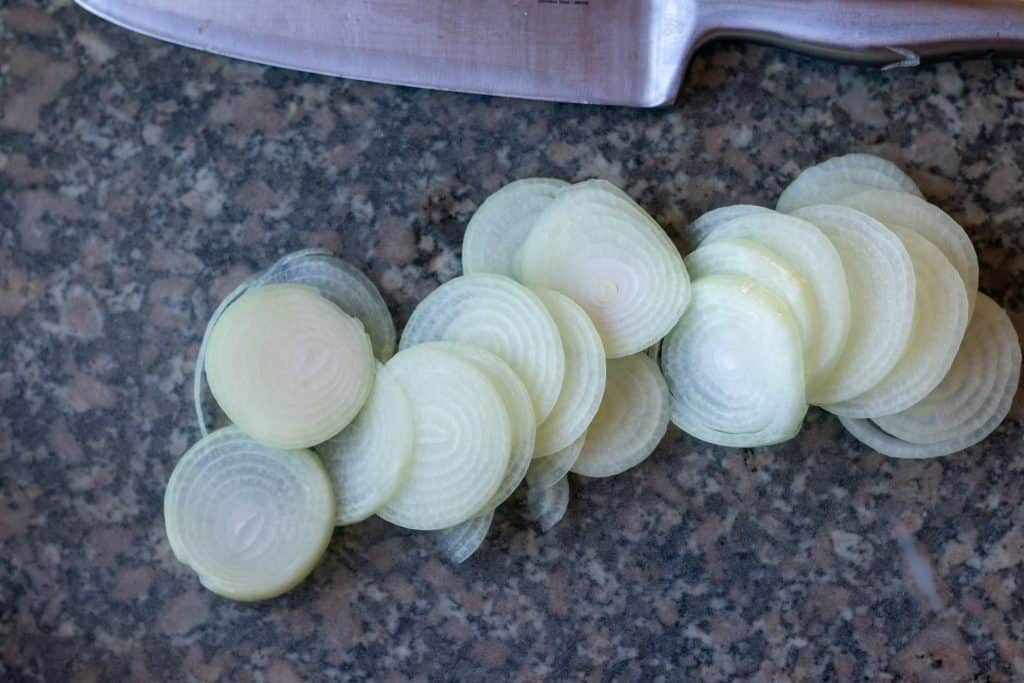 Peel the onion and cut the root end off. Slice the onion into thin rounds and add it to the bowl with the beef. 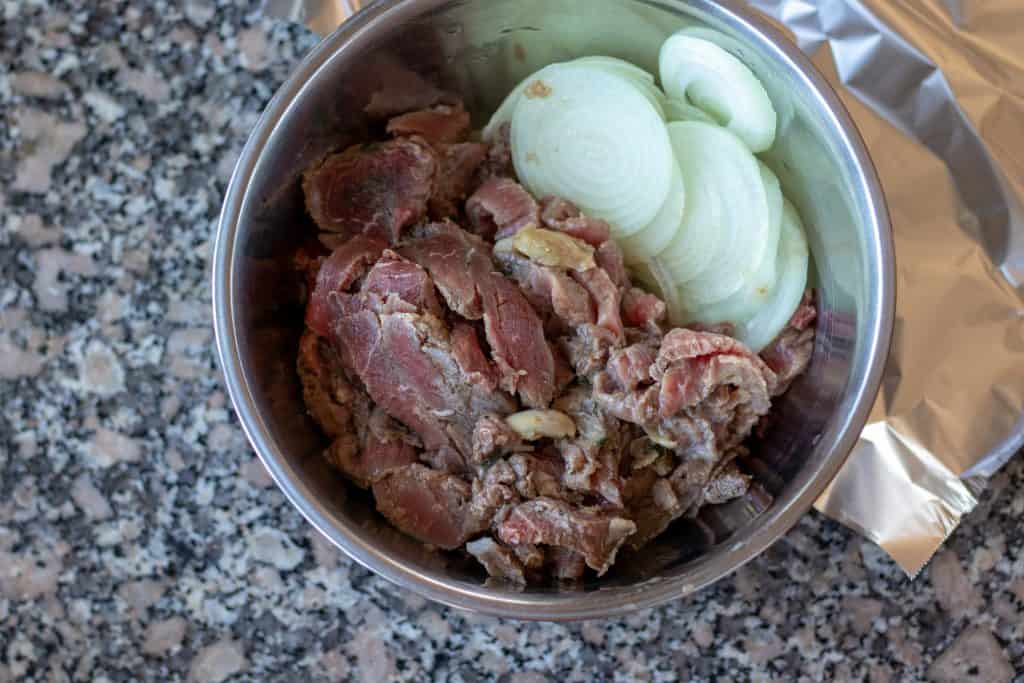 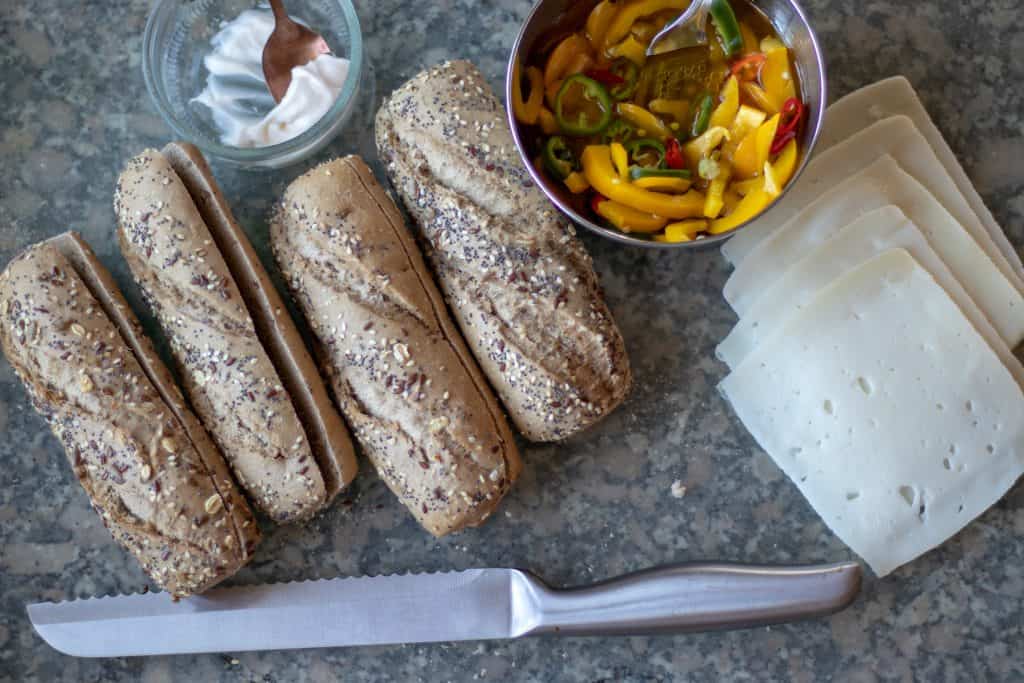 Lay the bread on a cutting board and using a serrated bread knife, cut down the length of it about 3/4ts of the way through so that that one side is still attached. Lay the cheese on the cutting board for easy access while cooking the beef and remove the pickled peppers from the refrigerator. 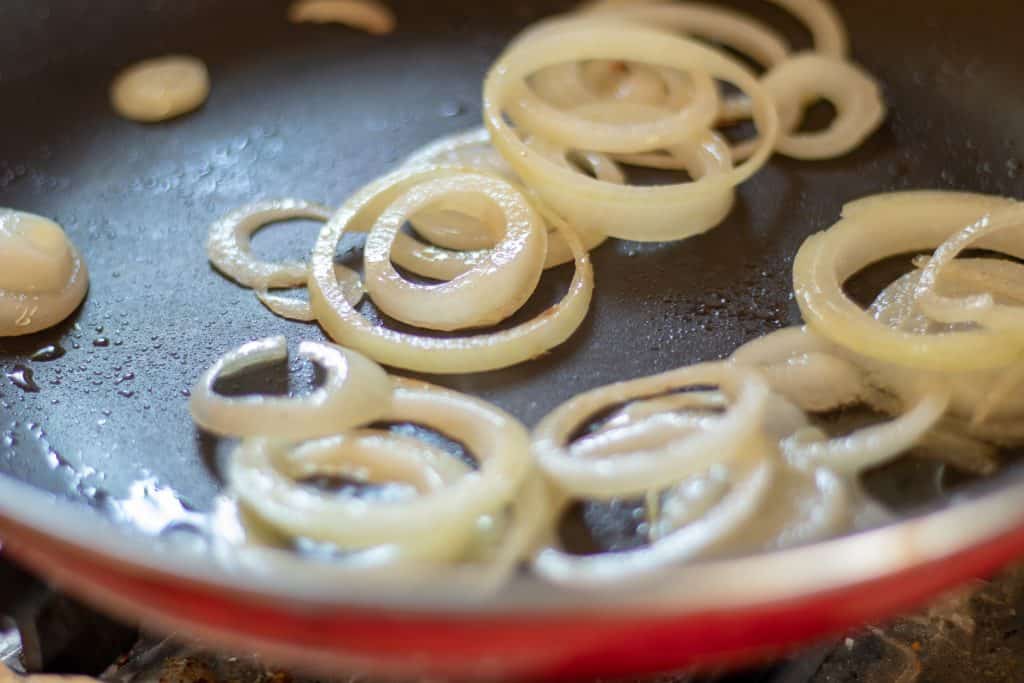 Pour the olive oil into a sauté pan and heat it over medium-high. Toss the onions into the pan and sauté them for a couple of minutes. 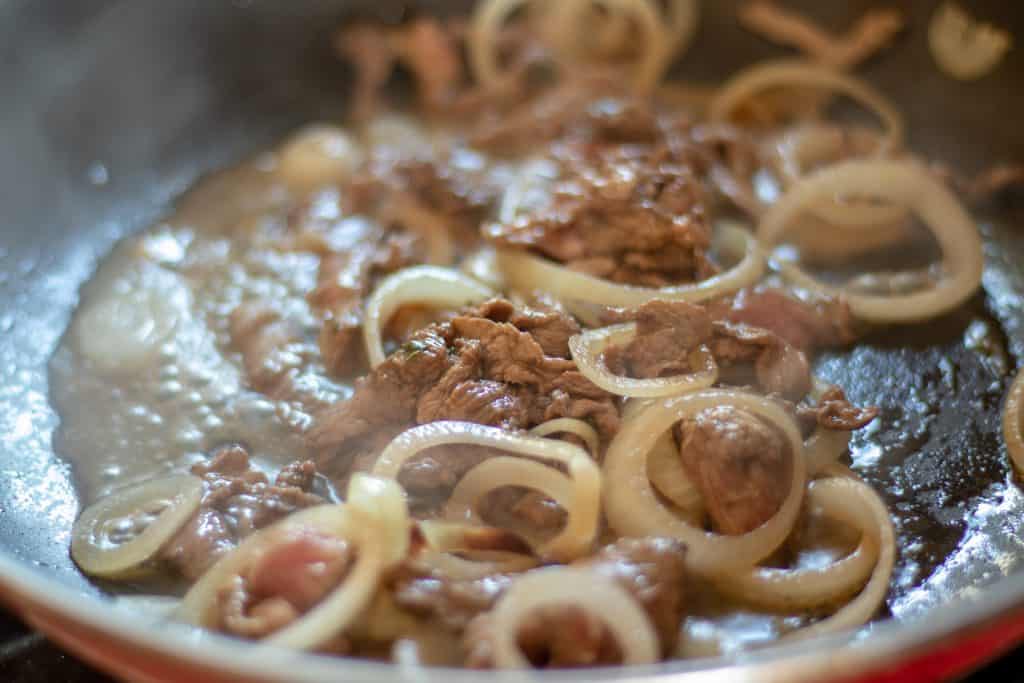 Add the beef slices in a single layer to the hot pan, sauté them, and mix them with the onions as they cook.

STEP ELEVEN – ADD THE CHEESE TO THE BEEF 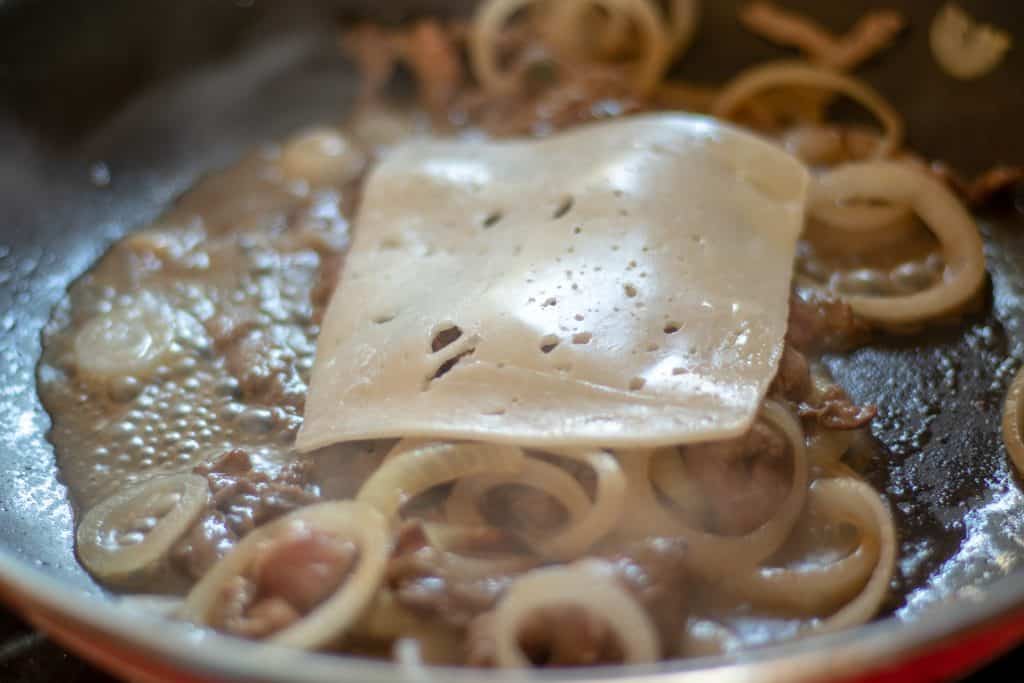 Divide the beef into portions and lay a slice of cheese on top of each and let it melt slightly.

STEP TWELVE – ADD THE BREAD TO THE BEEF AND CHEESE 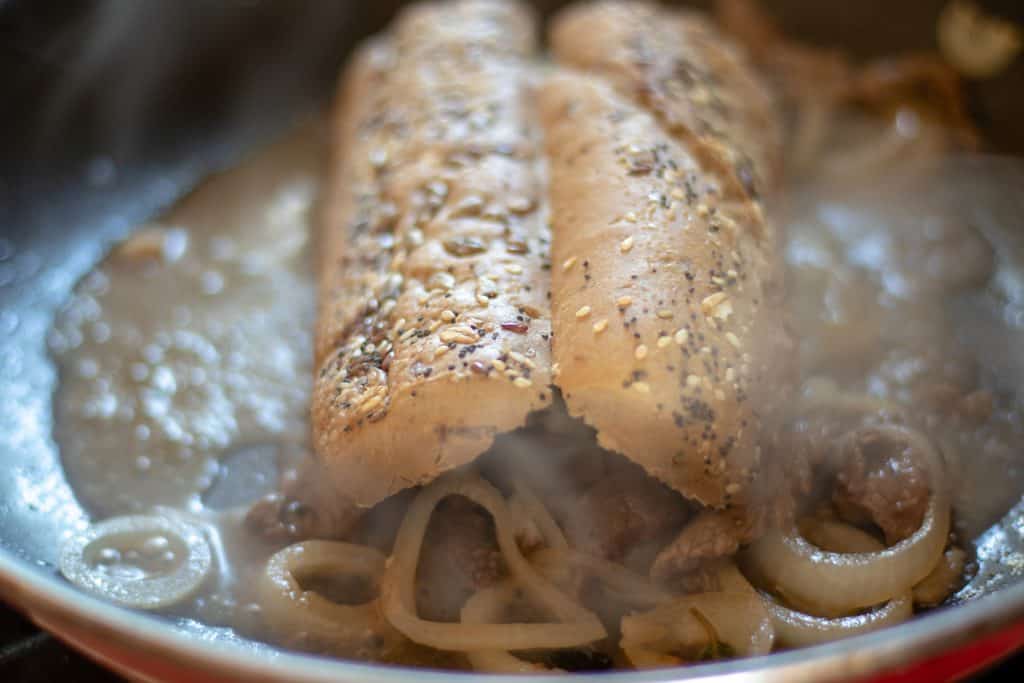 Spread mayonnaise on the inside of the bread before laying it, inside down, on top of the cheese and beef. Allow the bread to sit on top a couple of minutes to soak up the steam before picking it up with a spatula and turning it over to rest on a cutting board.

STEP THIRTEEN – ADD THE PEPPERS TO THE SANDWICH 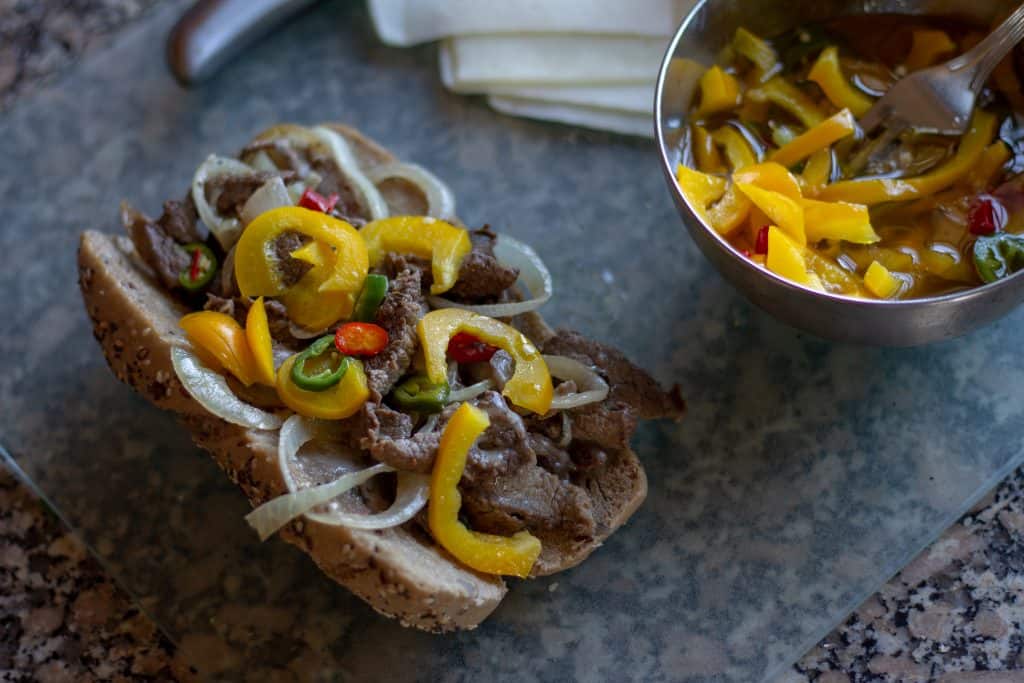 Add the pickled peppers on top of the sandwich and serve them immediately.

This sandwich isn’t the classic Philly cheese steak, but it is taken from the same idea and uses the same elements in a new way!

How would you make this your way? Mushrooms instead of beef? Use all sweet peppers or a mixture of different varieties of spicy ones for pickling? You’re favorite bread perhaps? Let us know!