The game of tennis is widely believed to have started thousands of years ago. One theory is that monks played a crude courtyard ball game which was played against the walls of the monastery. It was named ‘je de paume’ which meant game of the hand. Theory says that the monks would shout ‘tenez’ when they served the ball. ‘Tenez’ means to take, and the game seems to have evolved from there. Over time the game grew in popularity and spread beyond the monastery walls. At one point, it became so popular that the Pope as well as King Louis IV tried to ban it. The game continued and to this day it is still played avidly all over the world. Tennis rackets changed from rather strange looking paddle type things to wooden frames with string, and then to more modern versions. Tennis balls were originally made of wood but over the years they changed to leather filled balls.

In 1850 Charles Goodyear invented vulcanised rubber which changed the whole design of a tennis court and made the balls somewhat bouncier. These were the beginnings of tennis courts as we know them now. Tennis is now played all over the world and by millions of people everywhere. 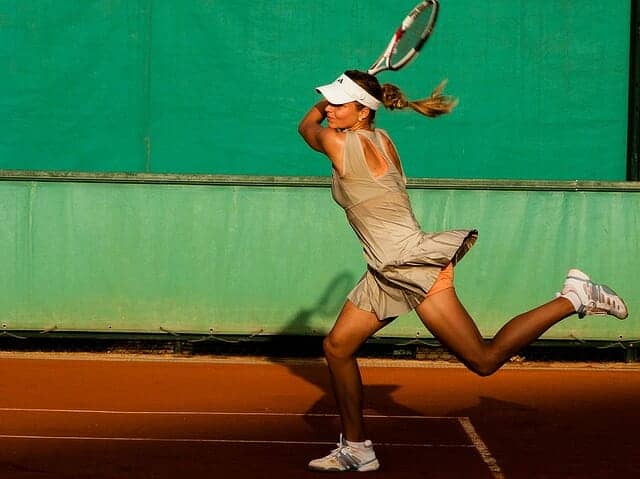 Tennis is a game which is played by either two or four players, in singles, or doubles. Each person uses a racket to hit the ball. The aim is to hit the ball over the centre net and into the opponent’s side of the court in a way that the opponent cannot return, and thus win the point. If the opposite players are unable to return the ball, then the point is awarded to the side that hit the ball first.

Tennis is played at all levels, from children’s tennis to social tennis and up to Olympic level. It is even played by people in wheelchairs. In fact, it can be played by anyone who can hold a racket.

According to a 2013 MIT study wheelchair tennis is now played in over 100 countries.

The rules of the game have changed very little since 1890, with the last change taking place in the 1970’s with the introduction of the tie break. Only recently has electronic review technology been added, along with the point challenge system.

Drills for under sevens

Children who are under seven years old need entirely different drills from older children. While an adult may think of these as just games, they form an important part in teaching the little ones’ coordination and speed.

Drills for beginners and kids

Drills are the best way for beginners and children to learn the basics of the game and develop correct techniques. They are also the best way to develop consistency and build up confidence.

Every tennis stroke is really just a process of putting together a series of movements, but these must be practised for the player to play to a reasonable level. Below is a basic running lines drill, although this can be hanged as the coach wishes.

Many club and social players are in the intermediate range. They may become frustrated playing at club level because they lack the experience or training to finish off a shot. Tennis is a game where small improvements can mean big rewards. Having a consistent drill routine is a quick and simple way to improve the game.

Even senior people may still enjoy playing tennis and to do this well, there are some exercises that can be done to keep them in good shape.

In an article from href=”https://www.researchgate.net/publication/232162553_Speed_Quickness_and_Agility_Training_for_Senior_Tennis_Players we read that these three qualities will improve a senior tennis

For anyone taking practise seriously, this pack of 12 cans is exactly what you need.

This Junior tennis racket will make a great gift for any youngster.

This racket holder is exactly what you need to carry all your tennis gear with you.

For playing in cold weather, this Argyle Men’s Sweater will be perfect!

For anyone serious about practice, this electronic pitching machine will be a great bonus.

Tennis is without a doubt, one of the most popular games in the world. It can be played by any person who can hold a racket. Whether you choose to play the game socially or turn professional, this is a game that will reward you when you practise. Not only is it a great game to meet people and make friends, but also a wonderful way to get fit and healthy.