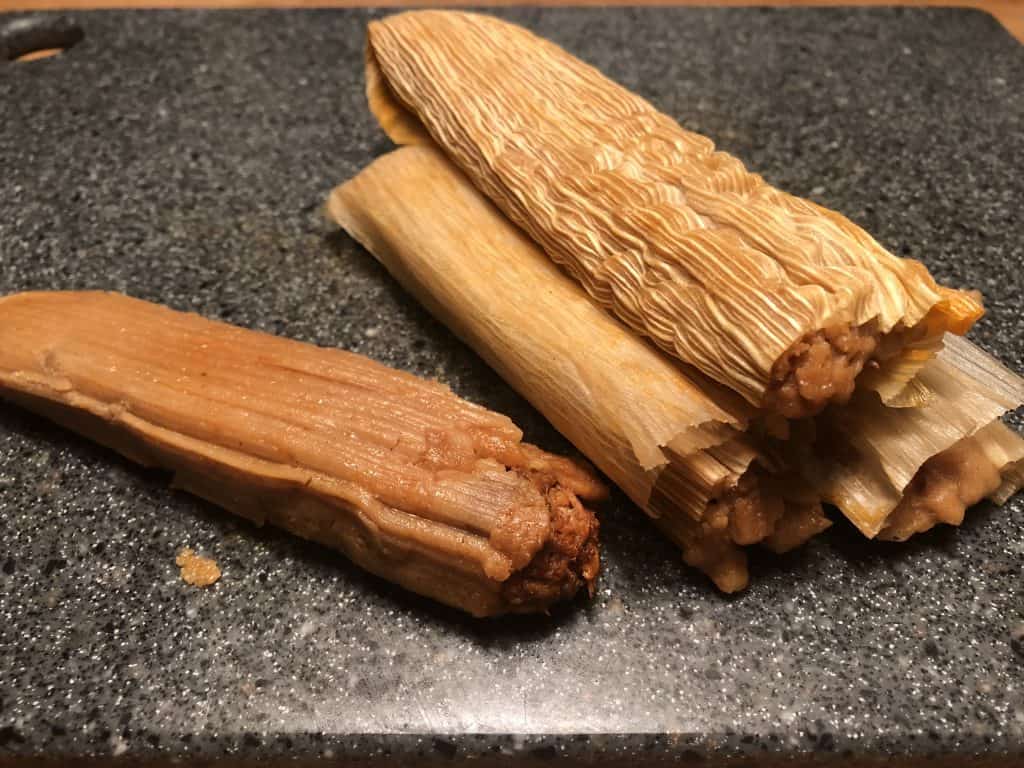 Tamales have got to be one of the most iconic dishes when dealing with Mexican cuisine. These savory snacks are packed with flavorful meat and surrounded by a soft dough that has been steamed inside corn husks. This recipe will be for authentic Mexican tamales, and it should be noted that this dish takes a great deal of preparation to complete so make sure that you have a few free hours if you want to try it out for yourself.

Making these tamales has been one of the most rewarding dishes that I have cooked in quite some time, and the sheer quantity of tamales that are produced will keep you fed for weeks to come! 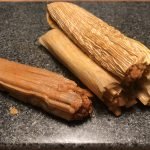 Step One – Prepare the Pork for Slow Cooking 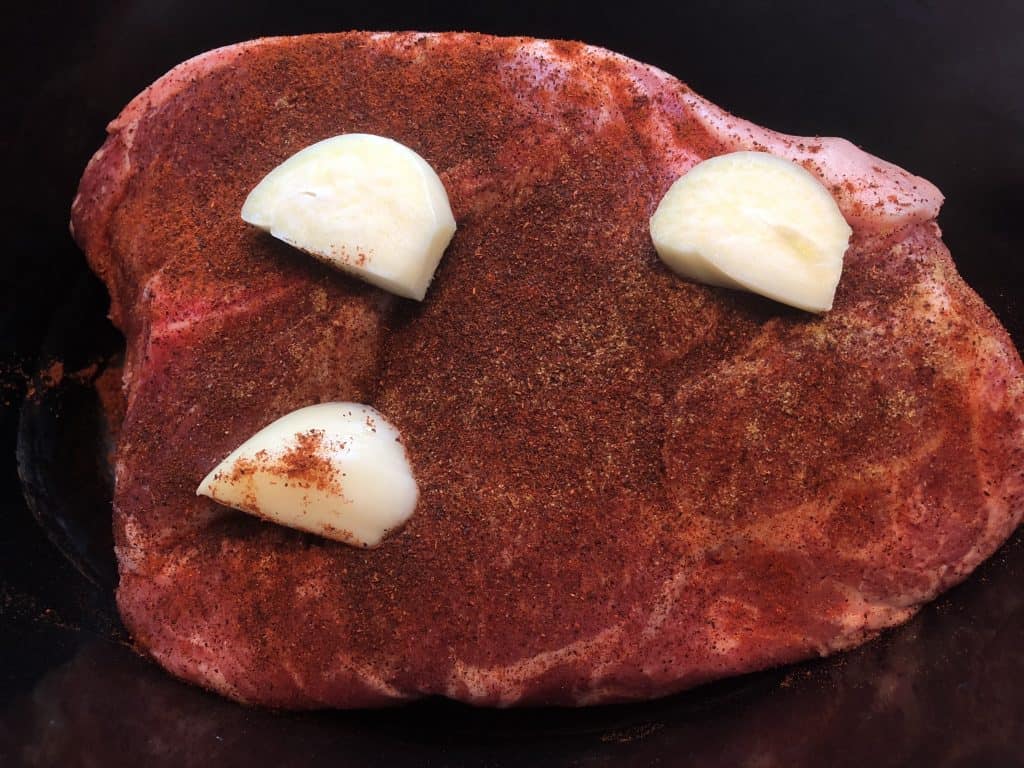 Before doing anything else with this recipe, we will begin by preparing the pork shoulder to be slow cooked. This is by far the best method of cooking your tamale meat, as the tenderness and flavor that a slow cooker provides simply cannot be matched. Take your pork shoulder and place it in the bottom of an empty slow cooker. Feel free to trim any excess fat if you desire, but leaving it on the meat will add to the drippings that will be used later, and the unrendered fat can easily be removed once the meat has been cooked. Next, add liberal amounts of chili powder, paprika, salt, and pepper to coat the entire surface of the meat. Throw in a few garlic cloves and set the slow cooker to low for up to eight hours. 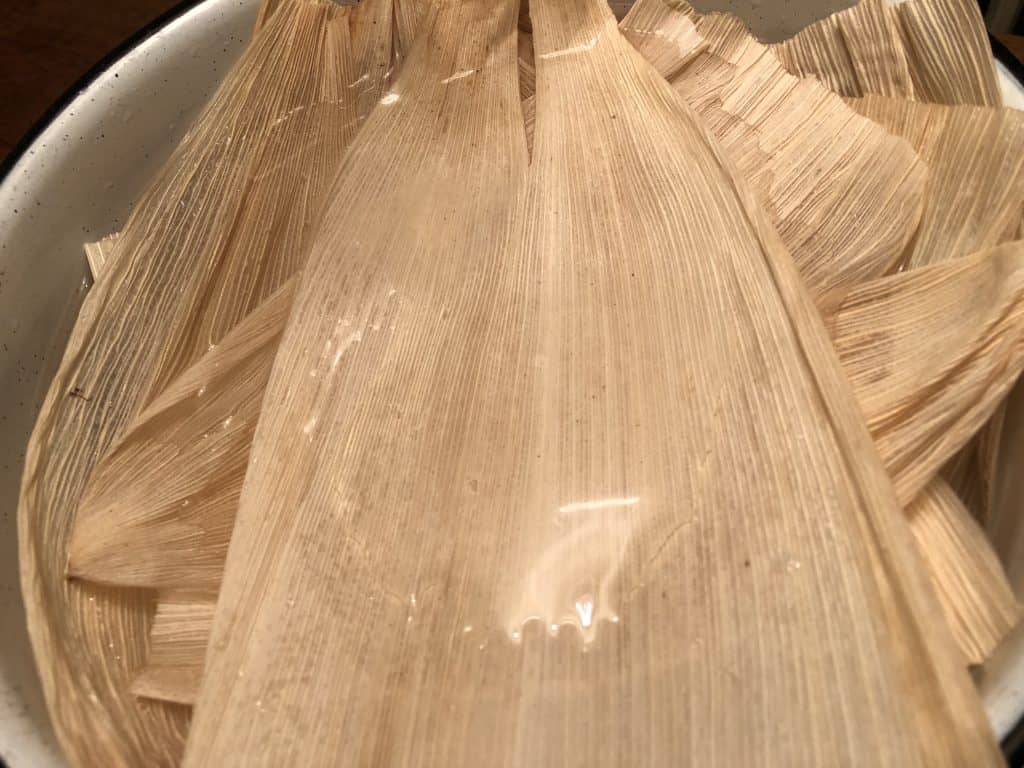 At least two hours before the pork is finished cooking, you will want to begin getting everything else in order. The first step in this would be to soak the corn husks in very hot water. Doing so will make the husks much softer and allows you to wrap your tamales more easily. If they are floating to the top, try putting a plate or other heavy object on top to keep the husks submerged. 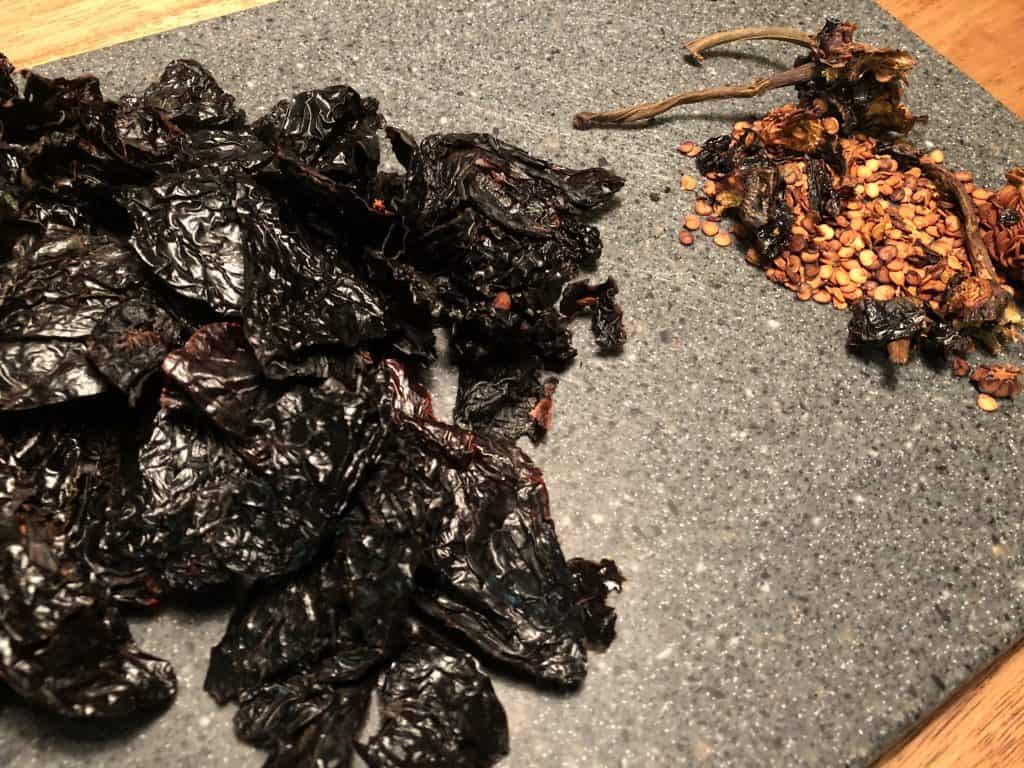 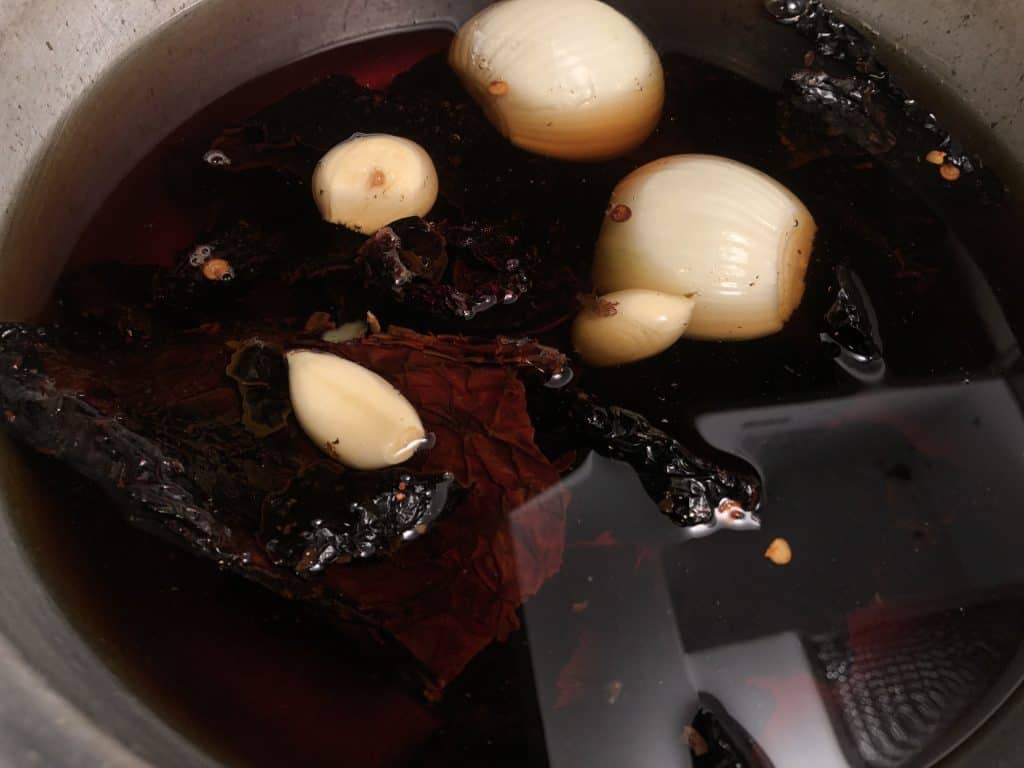 Take your deseeded ancho chile peppers and add them to a large pot of boiling water. Throw in a halved onion and a few cloves of garlic and continue boiling for around 30 minutes. You are really just trying to get the peppers softened so that they can easily be blended into a paste. When you are finished boiling the peppers it is very important to keep a some of the dark liquid for later. 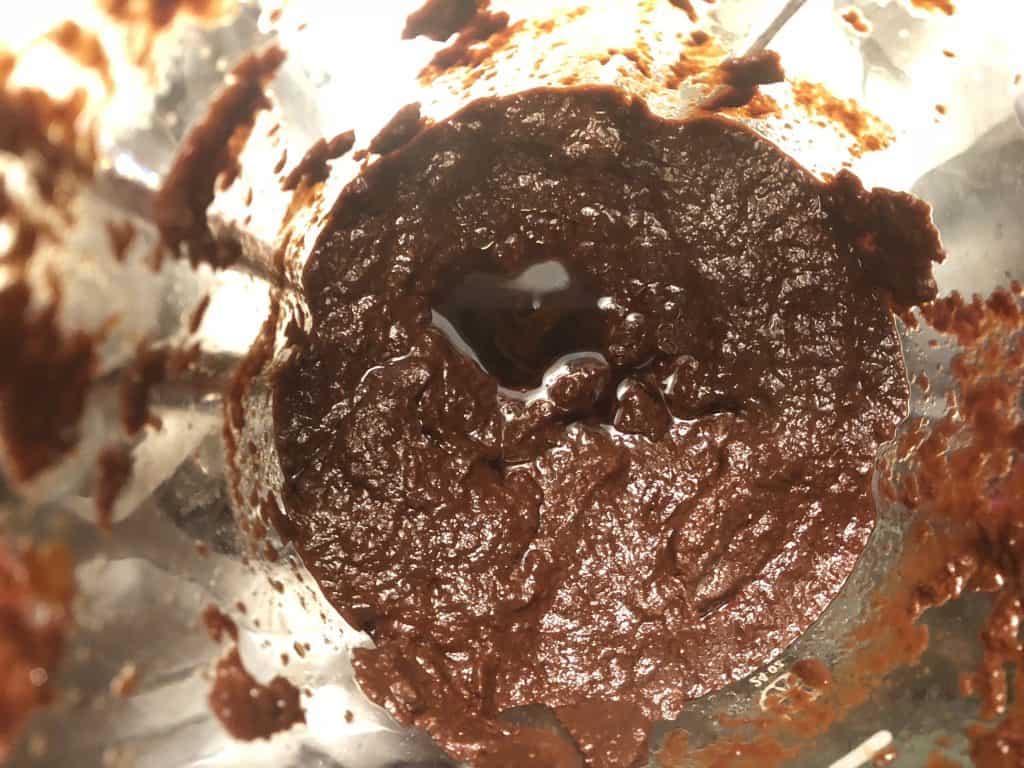 In a blender, pulse together the ancho chiles, garlic, and onion. Add a bit of the boiling water so that everything is able to blend smoothly. Once your paste is around the same consistency as the photo above, taste and add salt to your liking. Using an immersion blender will make this much easier and requires far less liquid to get the right consistency. 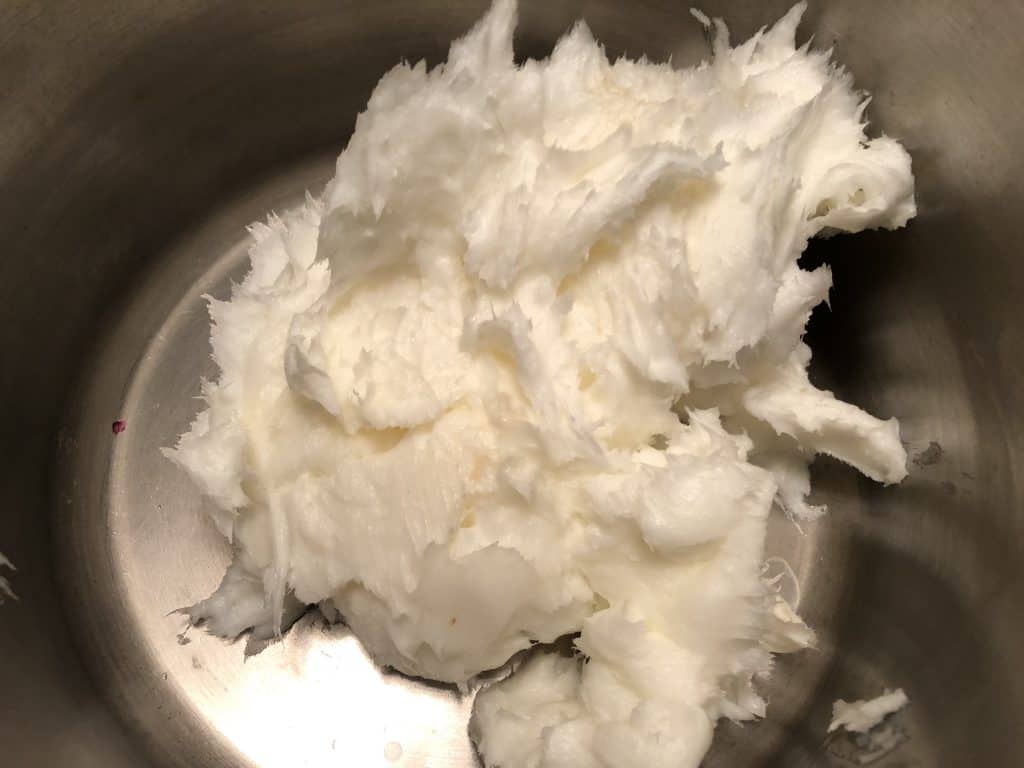 The next step of this recipe is making the masa corn flour dough for the tamales. Unlike typical doughs, this will have a consistency that closely resembles a grainy peanut butter. Start by melting lard in a medium saucepan over low heat. Do not heat the lard too rapidly as it will begin to splatter and can be both messy and dangerous. Once the lard has completely turned into a liquid take it off of the heat. 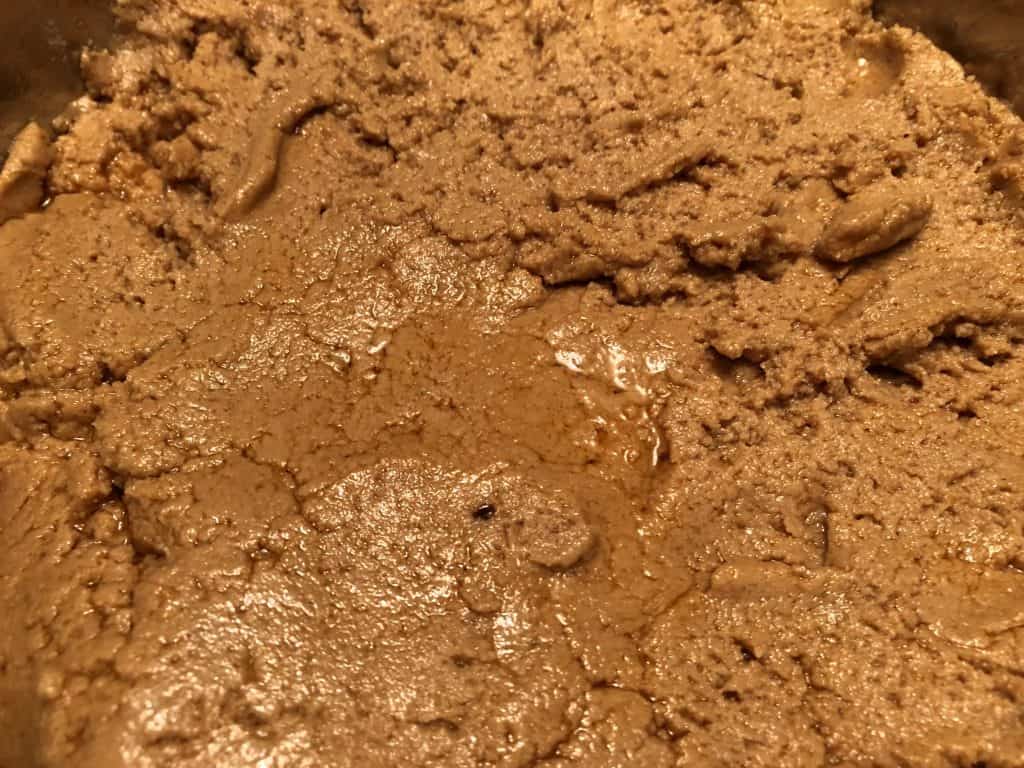 In a large bowl, slowly begin adding the melted lard to the corn flour. The dough should be a bit dry and clumpy still, so we will be adding a little bit of the pork drippings and ancho chile water to get the right consistency. This will also help to flavor and add color to the tamales. Again we will be adding salt to taste, along with a little bit of the ancho chile paste. 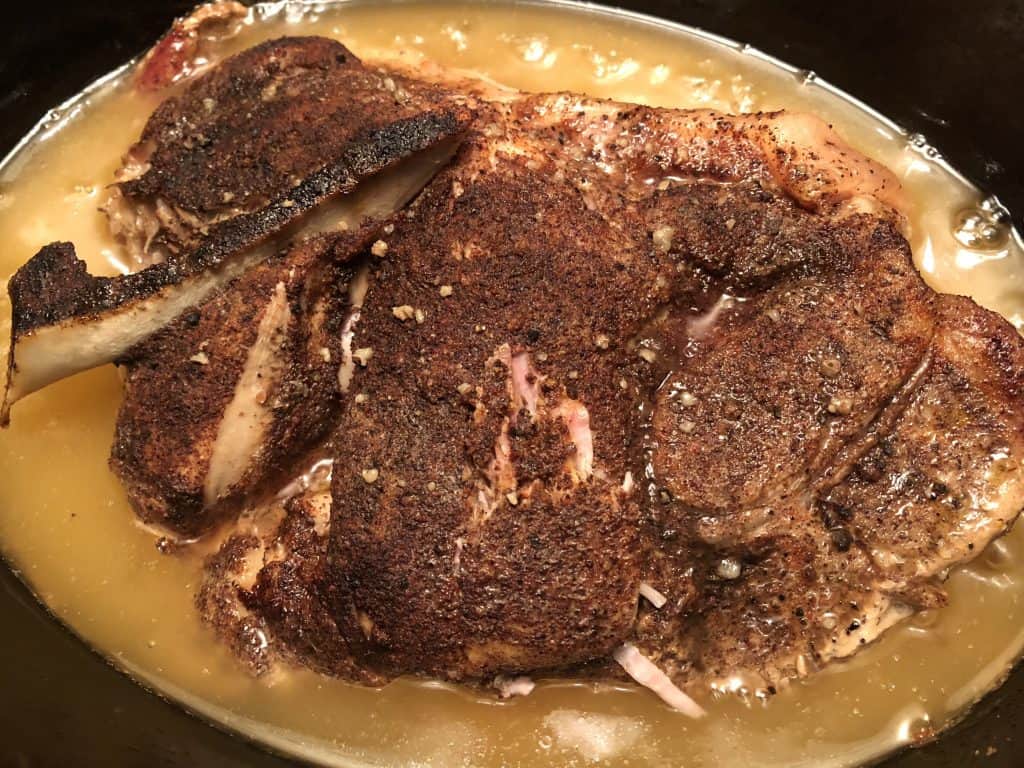 By the time that you have everything else just about ready, the pork shoulder should be finished cooking. You want the meat to be tender enough that the bone slides right out cleanly, and can easily be shredded with a fork. At this point you should remove the layer of fat (if you left it on) and discard of it. Make sure to save the drippings from the meat, as they will be used in the tamale dough. 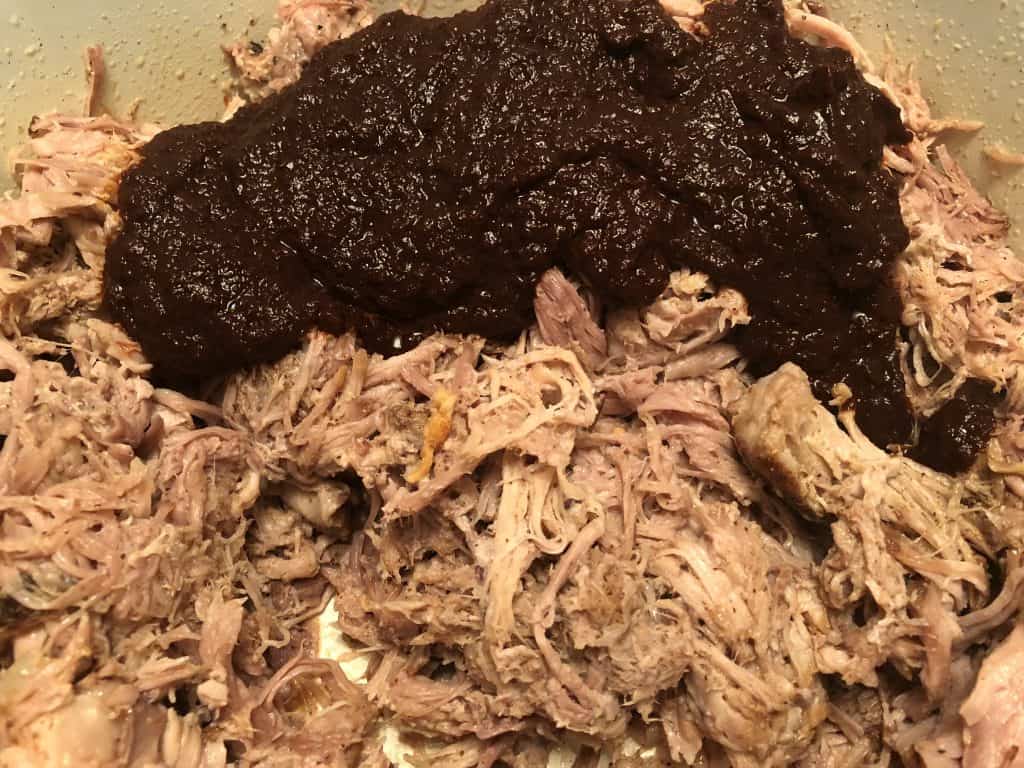 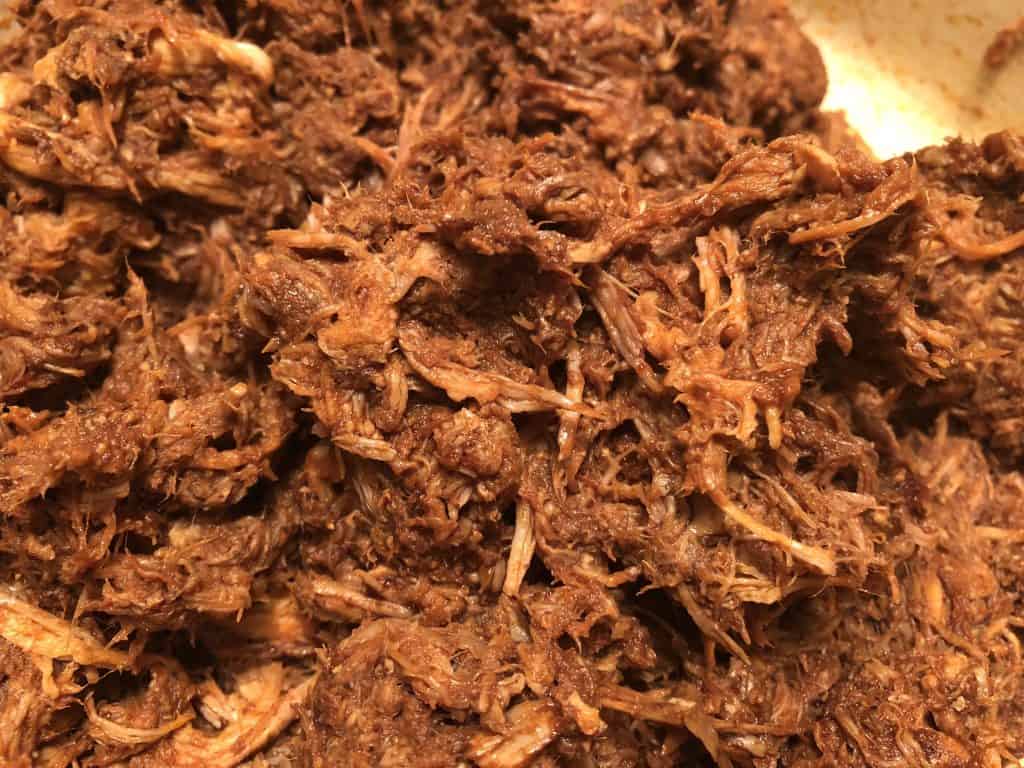 Now that the pork is completely shredded, all that is left to do is mixing in the ancho chile paste. You want the mixture to retain its meaty texture, ensuring that it doesn’t become too watery which would result in an unstable tamale. Mix it all together and then once again salt to taste. After this step you have everything ready and can begin assembling the tamales. 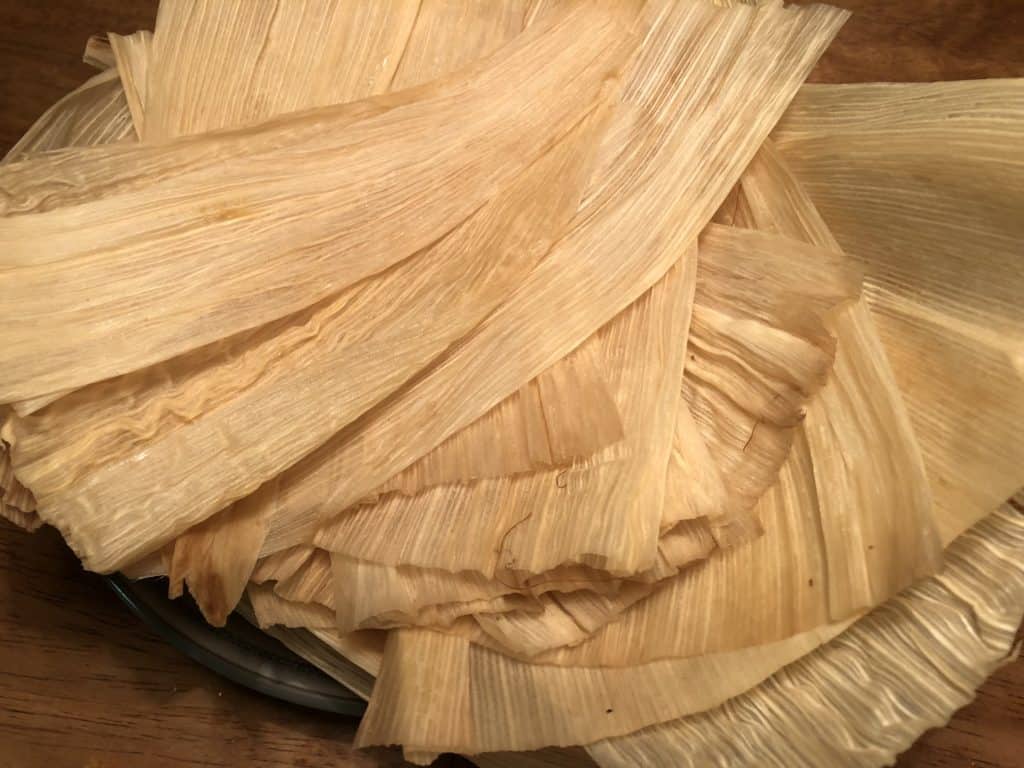 It is now time to remove the corn husks from the water. They should be much softer to the touch and can now be easily rolled and folded. Feel the exterior of the corn husks to determine which side will hold the filling. One side will be much smoother than the other ridgy side, so make sure to put everything on the smooth side. 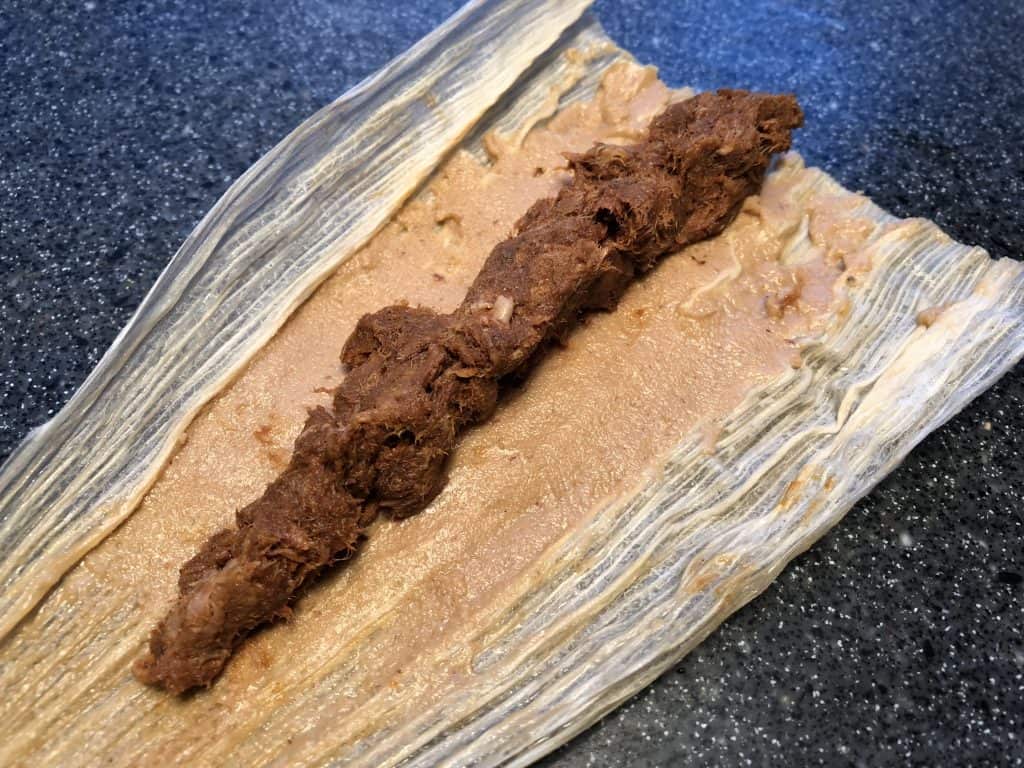 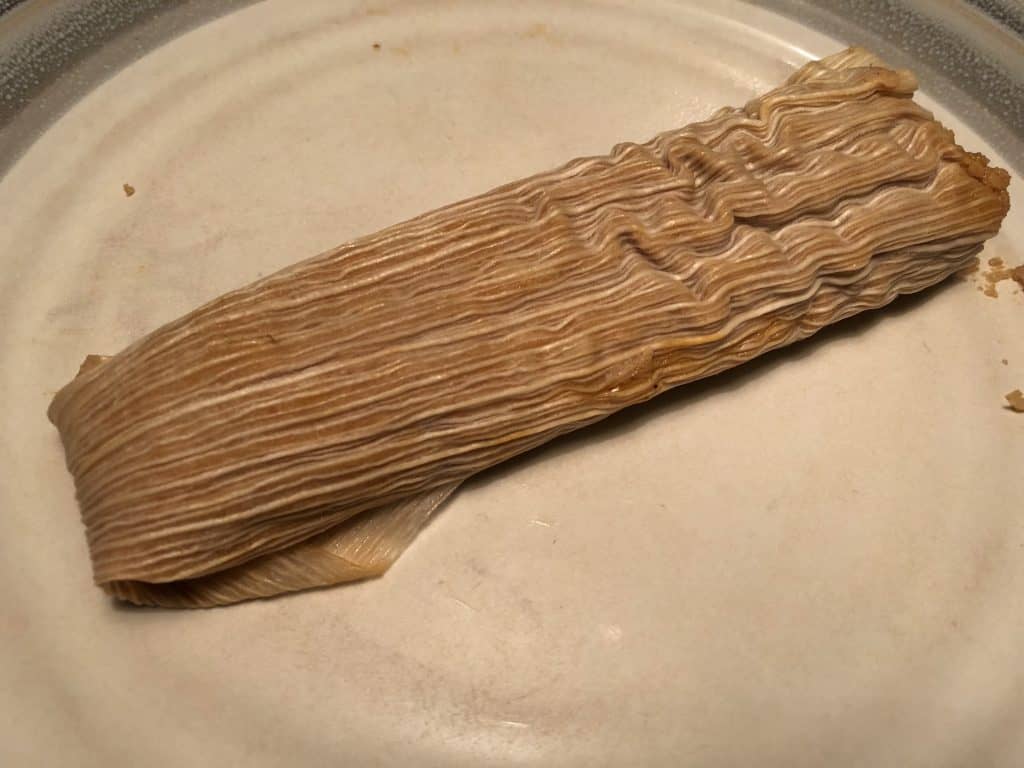 Now for the fun part! Take your corn husk and spread a thin layer of the tamale dough on the smooth side. You do not want to cover the entire husk with dough, so you should try to cover about 75% of its surface while making sure to leave space at the bottom. Next, take a good amount of the pork filling and pack it right in the middle. You want to have enough meat so that when you wrap the husk around it the dough should connect on the other side. After rolling the ends together, take the bottom of the husk and fold it upwards so that there is no longer any empty space. 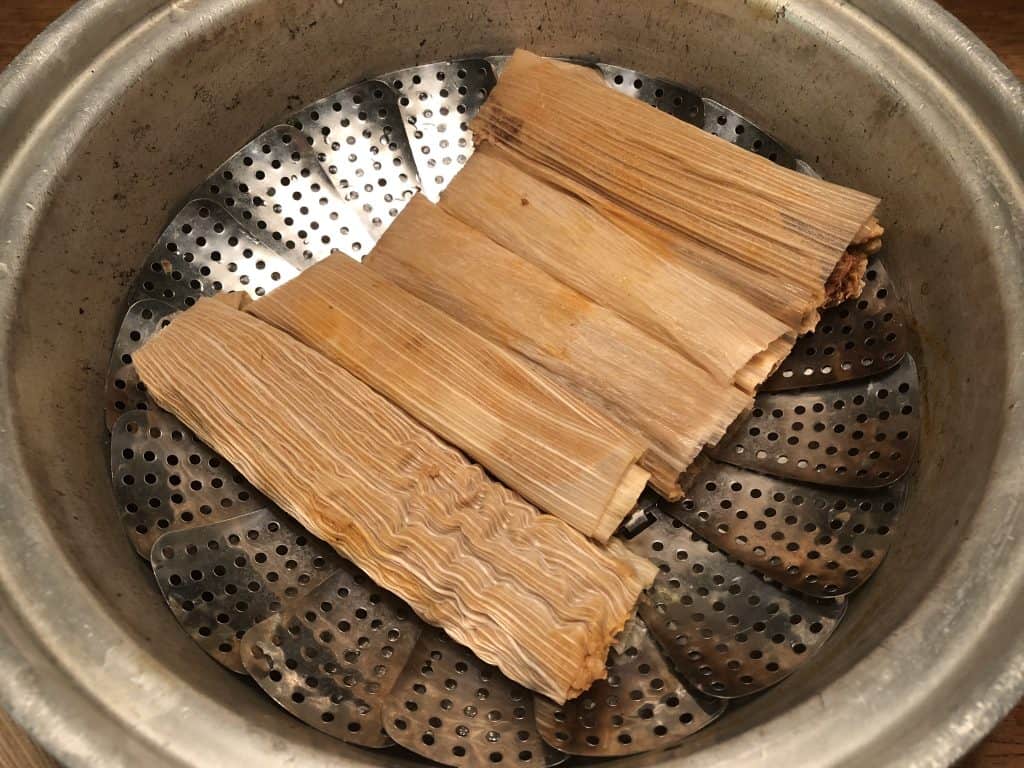 Now that it is finally time to actually cook your tamales, prepare a steaming pot by filling it with a layer of water and turn the heat on medium high. You want to use the largest and tallest pot that you can, as it is best to stack the tamales vertically with their open faces on top. Fill the pot with as many tamales as you can, then seal it with a lid and let them steam for at least 90 minutes. The finished tamales should be slightly firmer to the touch, but the best way to check if they are done is by simply opening one up. Also, dedicated food steamers will make this process much easier.

For anyone who may be intimidated by the difficulty of preparing this dish, you should know that it is much easier than it may seem. The majority of the cooking and preparation time is spent idly letting the meat cook or steaming the tamales. In fact, this is a great recipe to bond with family or friends when cooking together.

Expect to have leftovers as this recipe makes around 50 servings! Anyone and everyone will love this dish, so if you have the time and appetite this recipe is one you absolutely must try out for yourself.