The ThruNite Archer 2A V3 LED Flashlight is our best military flashlight. With a 2-button interface that is easy to operate, the firefly or SOS mode ensures that this is a good emergency flashlight as well. Its candle mode allows you to stand it up from the tail, which also makes it suitable for camping.

Our step-up pick is the ThruNite TC12 Micro-USB Interface Rechargeable Flashlight and the military flashlight has an IPX-8 standard waterproof rating which can take up to 2 meters of water immersion. Moreover, it is a great flashlight for those who work on night shift. With a max output of 1100 lumens so it is extra bright, the military flashlight runs at 5 volts at 1 amp on its charging current.

The budget pick is the Vizeri LED Focusing Lens Tactical Flashlight and bringing a natural beam, the military flashlight gives you easy battery replacement as a duty light for the police or the military. With a momentary-on feature for emergency preparedness and other military exercises, it is quite economical for its power source.

A military flashlight is used for tactical purposes, for emergency rescue operations, for working in the dark and in woody areas, and for various military or police operations. The durability and functions make them different from regular EDC or everyday carry flashlights that most people have in their homes and pockets. Any kind of flashlight attached to a military or police weapon is important because it will serve as a guide for dangerous situations in the dark when you or your comrades’ lives are at stake.
Waterproof and shock resistance are two of the things that make a military flashlight fit for military purposes. It is much like a tactical flashlight such that it is a bit more expensive than your usual flashlight and has a lot of functions. They are usually built to last for not just outdoor adventures but also for military operations.
Most red colored flashlights can be associated with IR or infrared flashlights as well. They are also great for bringing out the details in your current work or operations, especially in the dark or at night. Having a red colored lens in your flashlight will be a great thing to have for these kind of special situations, especially for military operations.
Using a military flashlight should be done sparingly. Only turn it on when you absolutely need it so that your target won’t know that you are carrying a light and it won’t give in your position, especially if you’re hiding from them and waiting to strike. 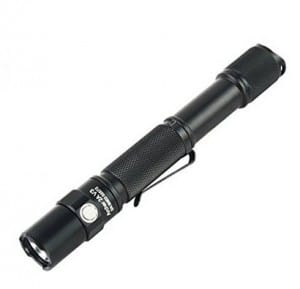 ThruNite Archer 2A V3 LED Flashlight
Our best military flashlight would be the ThruNite Archer 2A V3 LED Flashlight. As for the operation, its push button tail switch for on/off operation is easy to use. It is also o-ring sealed for the elements and for less damage to the bulb. Moreover, the lens is made with scratch resistant coating so it lasts longer.
Using a Cree XP-L V6 LED light bulb for its lighting, it is also o-ring sealed so it is great for the rainy days. With an IPX-8 standard waterproof rating or up to 1.5 meters of water immersion, , the overall visibility is good for this military flashlight with up to 118 yards or 130 meters.
It is made with military grade anti-abrasive material for the coating to protect against the elements. It is powered by 2 AA batteries so it is easy to find batteries for it. The cool white color makes it ideal for relaxing your eyes.
Reaching up to 500 lumens, the military flashlight also qualifies as a high-end EDC flashlight with five modes of lighting for versatility. It has a switch cover to protect it from the elements and it is made with a type III finish hard-anodized aluminum body for durability.
The memory function to remember your last settings is helpful in tough times. Being a versatile military flashlight which can also be used for reading books and maps, it has a lanyard included for attachment purposes.
With overheat protection to protect the internal components, the military flashlight has a peak beam intensity of up to 4232 CD. You can use it on an emergency and the reverse polarity protection for the battery ensures it won’t fail if you accidentally messed up the battery installation.
It can last up to 11 hours on its medium power mode. What’s more, it has a side button and tail switch for easy on/off. Also ideal for law enforcement, the military flashlight has a hidden strobe feature for self-defense purposes. Great for self-defense purposes, the military flashlight has a 10-year shelf life and is also backed by a lifetime limited warranty.

Some flaws but not really deal breakers to say about the ThruNite Archer 2A V3 LED Flashlight include the fact that its rated distance is not as good as others, but for the money, it is pretty decent for a military grade flashlight nonetheless. 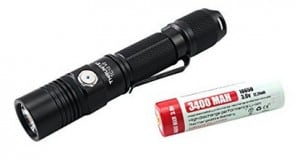 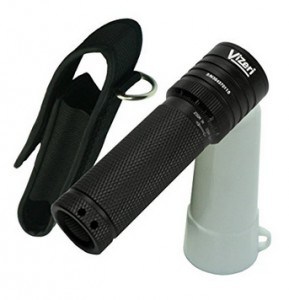 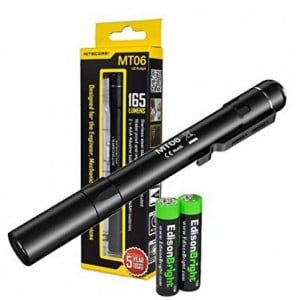 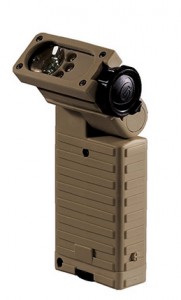 Streamlight 14032 Sidewinder Military Tactical Flashlight
The Streamlight 14032 Sidewinder Military Tactical Flashlight is our unique military flashlight that has an angled head or articulating head. With over 4 lighting sources for its LED lighting, such as blue, red, white and infrared, you can use it for various operations possible.
With a military flashlight like this, you can use it with your night vision goggles due to the presence of the infrared and red light, which can be used in covert operations. Moreover, the strobe function of this military flashlight makes it also a great tactical or self-defense flashlight for intruders who pass by.
Simply double click the switch of this military flashlight to use the strobe function. It uses only 2 AA batteries which can be easily supplied. It also has a spring steel clip for easy attachment onto anything. It is also o-ring sealed and gasket sealed for the openings so water will not get inside of the flashlight.
The military flashlight can be used for your AR-15 rifle and accessories for attaching this light to different gears are available. Being a waterproof or water resistant military flashlight, it can be used for MOLLE or ACH mounting. Its cap seals watertight so it can be protected against the weather.
Made under MIL-STD-801F Method 512.4, the military flashlight uses polycarbonate lens so it is tough and durable against scratches. What’s more, there are battery polarity indicators so you can switch batteries at night or in total darkness, which makes it ideal for important military operations.
The military flashlight can last about 5 to 6 months of daily use and it has a push-button switch for on/off operation. Great for bad weather and water instances, the military flashlight withstands -40 to 150 degrees Fahrenheit temperatures so it is great for almost any weather instance.
It can be switched from low to high light power levels and its lens is very scratch-resistant. Moreover, the military flashlight has a tethered tail cap so you can keep it with you at all times. In addition to that, the nylon case gives weather resistance and shockproof quality. This particular military flashlight is backed by a one year limited warranty. 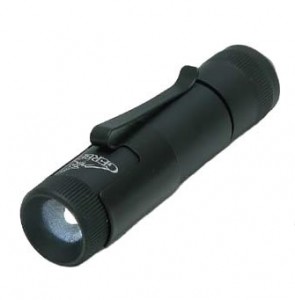 Best Military Flashlight that is Rainproof 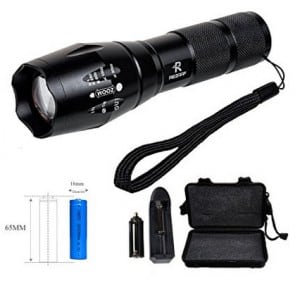 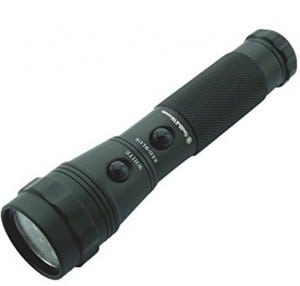 Smith & Wesson 110224 LED Flashlight
The Smith & Wesson 110224 LED Flashlight is our ideal military flashlight with color options, because you get a ton of LED light options, such as white (6), green (2), blue (2) and red (2) bulbs for your choice of action. It is able to shine up to 12 meters or 20 feet for the white light.
You can just power up the military flashlight with 3 AAA batteries. Being waterproof up to 1 meter of immersion, it is also shockproof and may run for up to 3 1/2 hours. It is able to switch easily because of the Multiple Switch Advanced Technology system (MSAT) for ease of operation.
The light can be used in alleys and streets and a one-handed operation is possible due to the reverse rear switch. The military flashlight can fit in a shirt pocket due to its size. The silent operation for the switch also makes it discreet. A holster is also included along with the batteries. There are a total of 12 LED lights in this unit and it is backed by a limited lifetime warranty. 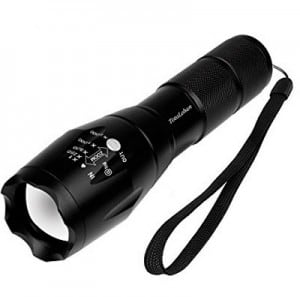 TotaLohan Tactical Military Grade LED Flashlight
The TotaLohan Tactical Military Grade LED Flashlight is our ideal lithium ion powered battery that has an adjustable focus for wide or narrow lighting. It also has 3 brightness levels to save up on battery power. It has an SOS and strobe function as well for emergencies and rescue operations.
Being skid proof means that this flashlight can be used in bad weather. With an IPX6 waterproof rating for rain survival, it also comes with an AAA battery slot for 3 AAAs. It has a lighting distance of 150 to 200 meters and has an aluminum alloy construction.
With power of 10 watts, this water resistant flashlight can be used on various outdoor activities other than in the military, such as in camping, hiking, cycling, trekking and others. It can also be used in search and rescue operations and can save lives.

As a whole, the ThruNite Archer 2A V3 LED Flashlight is our best military flashlight due to its 130-meter distance, IPX8 water rating and 500 lumens brightness, which makes it sufficient for military and rescue purposes or when the going gets tough in your police operations as well.