After moving in to a new place for the first time or renovating a basement, many people find the air to be muggy or stuffy due to bad ventilation. A quick and easy way to solve this problem is to invest in an air exchanger. Our top pick for the best air exchanger 2020 BPE-XE-MIR-2000 would reduce the humidity in your home and fill it with fresh clean air.

Our Top Picks For Air Exchangers
BPE-XE-MIR-2000
Top Pick
This is an energy recovery ventilator with an airflow capacity of 2250 CFM.
VIEW ON AMAZON → 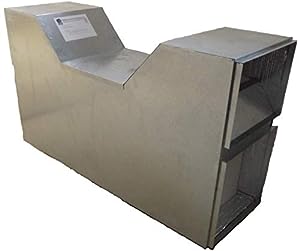 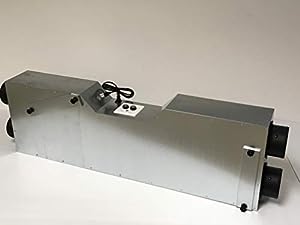 What are Air Exchangers?

Air exchangers do exactly what their name says. They exchange the “stuffy” air from inside your home for the “fresh, clean” air of the outdoors. According to the AIVC (Air Infiltration and Ventilation Center), this type of air ventilation can improve the air quality of your house, reducing allergens and pollution. The AIVC also describes how air exchangers can also help reduce energy use by regulating the air temperature as it enters the house.

Our top pick, the BPE-XE-MIR-2000, is an energy recovery ventilator with an airflow capacity of 2250 CFM. The ventilator, made with white polished polymer, weighs 280 pounds. This top pick has a voltage of 120 volts and an effective wattage of 990 watts. This enormous amount of power gives this top pick ventilator 1.33 horsepower.

The key pros that make the BPE-XE-MIR-2000 our top pick include: 80% to 98% thermal efficiency rate, a 2250 CFM airflow capacity, and ability to ventilate a large home. With such a strong airflow capacity, the BPE-XE-MIR-2000 can easily and effectively regulate the air temperature of a large home, while also providing the home with fresh outdoor air.

The BPE-XE-MIR-500 is our step-up pick. This BPE model is an energy recovery ventilator that can increase the thermal efficiency in your home by 91%. The device is made with white polymer and weighs 80 pounds. This step-up pick can supply 120 volts and 274 watts. This machine gains its energy from an AC unit and has 0.38 horsepower. The airflow capacity is 550 CFM.

The key pros of the BPE-XE-MIR-500 are thermal efficiency and durability. These two traits secured the ventilator on to our list of the 10 Best Air Exchangers and won our step-up pick award with its affordability and efficiency. With a high airflow capacity, this device constantly brings fresh air in to the home. This air is also thermal regulated, so the temperature of the house can be maintained all year long. Made with polymer plates, the BPE-XE-MIR 500 will not rust. Without any moving parts, this unit requires little to no maintenance.

The BPE-XE-MIR-350 won our budget pick award because it’s our most affordable energy recovery ventilator. This model is made with polished galvanized steel and weighs 58 pounds. Powered by an AC unit, the BPE-XE-MIR-350 has a voltage of 120 volts and wattage of 274 watts. With horsepower up to 0.37, the ventilator has an airflow capacity of 350 CFM.

The key pros that make the BPE-XE-MIR-350 our budget pick include: insulation with 6.0 R-value, up to 98% thermal efficiency, and direct counter-flow pattern. The high insulation values in this budget pick really amps up the thermal efficiency of the ventilator. This combined with their direct counter-flow patter can improve the air quality and maintain a constant air temperature throughout the house. 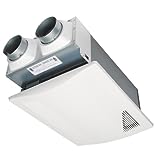 The Panasonic Whisper Comfort is made with Galvanized steel and has two 4-inch air ducts: one to take out the “stuffy” air from inside your house and one to pump in fresh air from outside your house. This air exchanger from Panasonic is attached to the ceiling using an ERV insert. The Whisper Comfort weighs 24 pounds and puts out 120 volts and 23 watts. This system has a 40 CFM air flow capacity.

The key pros for the Panasonic Whisper comfort are the two-duct system and runs quietly. The two-duct system balances the air in your home by continuously supplying the home with fresh air and taking out the pollutants from the air inside your home. Plus, the system makes little noise so if you’re watching a football game or just trying to sleep, this air exchanger will not distract you at all. It’s quiet nature gave this air exchanger a spot in our 10 best air exchangers list. In the summer and winter months, this system helps to regulate the air temperature in your house. This keeps your house cool in the summer and warm in the winter without using much energy.

The BPE-XE-MIR-100 is made in the USA with white polished polymer. The unit weighs 41 pounds and has an airflow capacity of 100 CFM. The BPE-XE-MIR can put out 120 volts and 38 watts giving the system 0.025 horsepower. The AC unit powers this air exchanger.

The key pros of the BPE-XE-MIR-100 include: removable and washable parts, constant intake and outtake of air, and 91% thermal efficiency. The removable and washable parts make cleaning and maintenance of the unit easier, allowing the unit to run more effectively. The BPE-XE-MIR-100 constantly exchanges 100 CFM of indoor air for 100CFM of outdoor air. For only 38 watts of powers, this unit can ventilate a medium-sized home. With a built-in Energy recovery module, the BPE-XE-MIR can increase the thermal efficiency of a home up to 91% by regulating the temperature of the air coming in to the house.

The BROAN HRV90HS is a heat recovery ventilator. The machine is made with steel and weighs 39 pounds. The box is quite small with 1.9 by 1.6 inch dimensions. Although the BROAN box is small, it can actually heat houses up to 3,000 square feet. Plus, this ventilator system can put out 120 volts and 150 watts. All this power gives the BROAN HRV90HS an airflow capacity of 45 to 96 CFM and a current of 1.3 Amps. 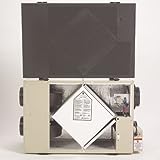 The BROAN HRV100H is a heat recovery ventilator with an airflow capacity of 135 CFM. The unit is made with steel and weighs 74 pounds. The dimensions of the unit are 13.2 by 30.2 by 20 inches.

The key pros of the BROAN HRV100H are its ability to heat homes up to 4,500 square feet, maintain balanced ventilation throughout the home, and prevent ice build-up during the cold winter months with a built-in defrost mechanism. The BROAN HRV100H constantly exchanges the stale indoor air for fresh outdoor air. Plus, the unit will never freeze up or be iced over because it has a built-in defrost mechanism that will keep the system core warm and running.

The BPE-XE-MIR-200 is an energy recovery ventilator that can put out 120 volts and 38 watts of power. The ventilator, made with white polymer, weighs 40 pounds. Powered by an AC unit, this ventilator has an airflow capacity of 225 CFM.

The key pros of the BPE-XE-MIR 200 include: an 80 to 98% thermal efficiency rate, a direct counter-flow air pattern, and an energy efficiency ratio (EER) of 60 or greater. By regulating the temperature of the air going in to the home, the BPE-XE-MIR-200 can help keep the heating and cooling bill low all year round. The unique direct count-flow air pattern constantly exchanges the polluted indoor air for fresh outdoor air. With an EER of 60 or greater, the BPE-XE-MIR-200 is one of the most efficient ventilators on the market today, which makes it worthy to be on our list of the 10 best air exchangers.

The BROAN GSHH3K can filtrate, freshen, and ventilate indoor air. This system has an airflow capacity of 270 CFM. The unit is made with ABS, a thermoplastic polymer known for its insulation and durability.
The key pros of the BROAN GSHH3K are its ability to reduce allergens in the home and exchange polluted air in the home for fresh clean air. The filtration system within the BROAN GSHH3K can detect and reduce allergens and pollutions that are 0.3 microns. This sysem can also supply fresh air to a home up to 6,000 square feet.

That concludes our list of the 10 Best Air Exchangers. Whether you want to ventilate an office space or a whole house, don’t forget to check our list to see which ventilator best fits your needs.