There are several methods used to determine an athletes lactate or anaerobic threshold. While the most accurate and reliable is through the direct testing of blood samples during a graded exercise test, this is often inaccessible to most performers.

There are several field tests that can also be used to estimate lactate threshold. They vary in their reliability but some offer an acceptable alternative for most amateur athletes.

It is also worth bearing in mind that blood lactate and lactic acid are not the same substance. Blood lactate production is actually thought to be beneficial to endurance performance and may delay fatigue. Nevertheless, its accumulation still remains a good marker for the onset of fatigue. See the lactic acid article for more information.

The most accurate way to determine lactate threshold is via a graded exercise test in a laboratory setting (2). During the test the velocity or resistance on a treadmill, cycle ergometer or rowing ergometer is increased at regular intervals (i.e. every 1min, 3min or 4min) and blood samples are taken at each increment. Very often VO2 max, maximum heart rate and other physiological kinetics are measured during the same test (3).

Blood lactate is then plotted against each workload interval to give a lactate performance curve. Heart rate is also usually recorded at each interval often with a more accurate electrocardiogram as opposed to a standard heart rate monitor. 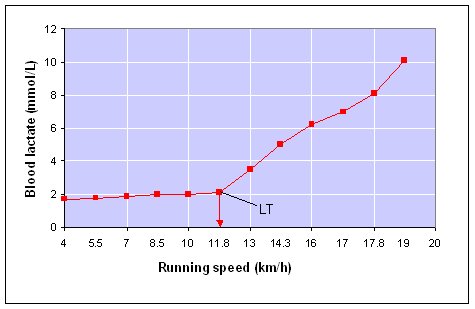 Assuming the inflection is clear (as in the graph above), the relative speed or workload at which it occurs can be determined. In this example, the athletes anaerobic threshold occurs at about 12km/h. This means, in theory they can maintain a pace at or just below 2km/h for a prolonged period, indefinitely. Of course, this is purely hypothetical as there are many other factors involved in fatigue not least the amount of carbohydrate stores an athlete has in reserve (1). A crossover to fat metabolism will significantly reduce the athletes race pace (2).

By recording heart rate data alongside workload and blood lactate levels, an athlete can use a heart rate monitor to plan and complete training sessions. Although monitoring heart rate is never completely reliable and varies greatly between and within individuals (1,2,3) combining it with lactate measurements is probably more reliable than using the Conconi test (see below) for example. 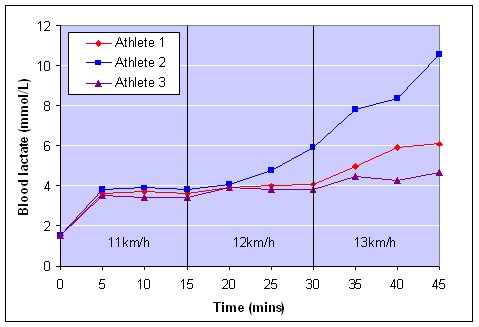 Notice that for Athlete 1, blood lactate remains steady at their estimated anaerobic threshold (12km/h) and lactate begins to accumulate when the pace is increased to 13km/h in the final 15 minutes. For athlete 1, this is confirmation that their anaerobic threshold pace is reasonably accurate.

For Athlete 2, lactate begins to accumulate during the middle 15minute segment (their estimated threshold) and continues to do so during the final 15 minutes. For this athlete, anaerobic threshold occurs at a slightly slower pace than was determined originally.

Finally, Athlete 3s lactate curve does not rise significantly even during the final 15 minutes segment. Anaerobic threshold for them occurs at a slightly higher pace then was originally determined.

Assuming, you dont have access to facilities that directly monitor your or your athletes lactate response, are there other acceptable alternatives?

Portable lactate analysers are becoming more popular amongst coaches and athletes at all levels. A good portable analyzer should have the same validity and reliability as laboratory testing equipment. The Accutrend Lactate Analyzer for example, has been tested using guidelines of the European Committee for Clinical Laboratory Standards and is cleared for sports medicine use by the Federal Drug Administration in the United States.

Needless to say a portable analyser is only one half of the equation. A suitable and sport-specific exercise test is still required and selecting the most appropriate protocol takes knowledge and experience. Any physiological test is only as reliable as the testers ability to follow a set protocol. Even when a suitable assessment has been chosen, numerous variables must be kept constant for the test to remain accurate and reliable. See the fitness tests section for guidelines on keeping physiological assessments repeatable and sample tests that can be used for various sports.

Although this is a relatively simple field test that would be useful for coaches and athletes at all levels, its accuracy has been contested by subsequent researchers (6,7,8). Studies have found that the deflection point or plateau in heart rate only occurs in a certain number of individuals and that when it does, it significantly overestimates directly measured lactate threshold. Conconi and co-workers (9) themselves acknowledge this controversy and cite studies that both support and contradict their original findings.

For guidelines on performing the Conconi test see the heart rate training page.

Some researchers have questioned the validity of determining the lactate or anaerobic threshold even in laboratory settings (10,11). Yet more researchers question whether a definite point or threshold exists at all (10,12,13,14). Instead they suggest blood lactate accumulation is continuous in nature and no specific point can be determined.

Rather than get bogged down in the debate it is sensible to remember that regardless of the underlying mechanisms, the physiological changes that accompany lactate accumulation have important implications for endurance athletes. Any delay in the blood lactate accumulation that can be achieved through training is beneficial to performance. With that in mind, why not take a look through the lactate threshold training article?